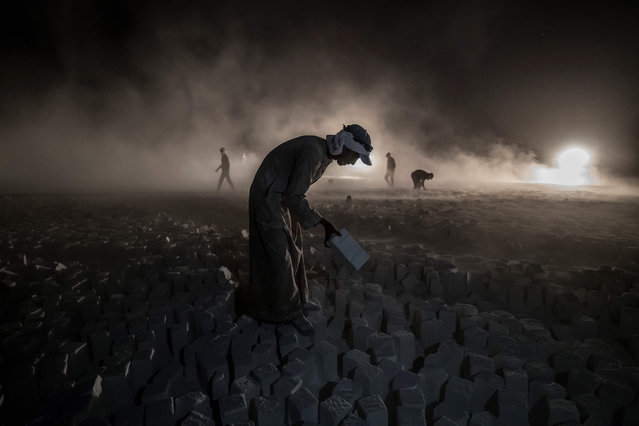 A labourer carries a stone block while working late at a limestone extraction quarry site near Egypt's southern city of Minya, some 265 kilometres south of the capital, on November 13, 2019. (Photo by Khaled Desouki/AFP Photo) 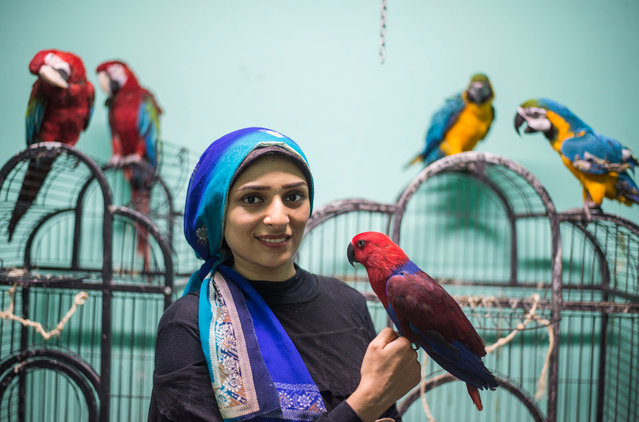 Birds trainer Nada Abdullah holds a parrot at the Parrot Academy in Cairo, Egypt, 08 August 2019. Parrot Academy was established in 2013 as the first dedicated parrot training academy in Egypt that offers training for parrots and other feathered-and-winged creatures. The academy also acts as a hotel for travelling bird-owners, and has a store with different types of toys for parrots. According to trainer Nada Abdullah, the academy do not teach parrots to talk, but more to control their vocals, train the bird not to bite or attack humans as well as helping the owners to understand and interact with their birds. (Photo by Mohamed Hossam/EPA/EFE) 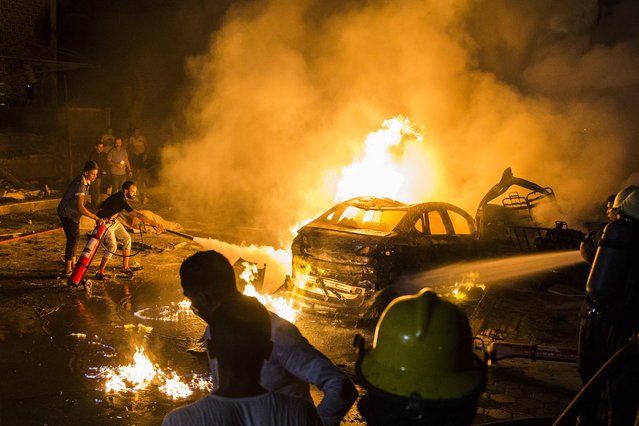 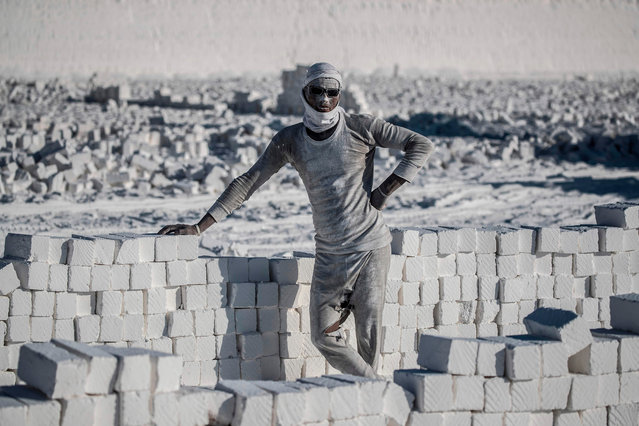 A labourer poses for a picture at the “White Mountain” limestone extraction quarry site near Egypt's southern city of Minya, some 265 kilometres south of the capital, on December 7, 2019. Covered in fine white dust, labourers at a limestone quarry in southern Egypt toil in brutal conditions with little workplace safety for paltry pay. Labourers work in shifts at the quarry in the so-called White Mountain east of the river Nile outside Minya, about 265 km south of the capital Cairo. (Photo by Khaled Desouki/AFP Photo) 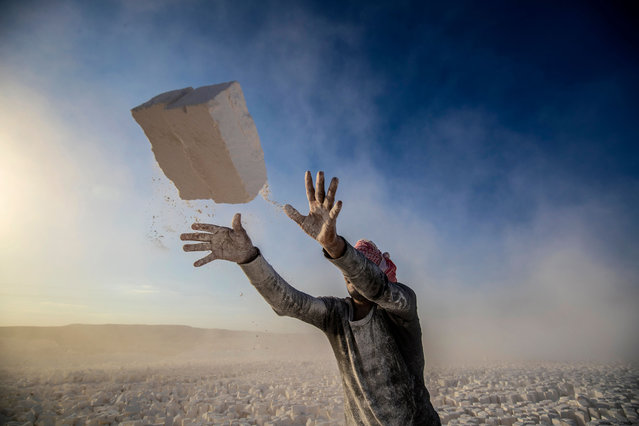 A labourer works at the “White Mountain” limestone extraction quarry site near Egypt's southern city of Minya, some 265 kilometres south of the capital, on December 7, 2019. (Photo by Khaled Desouki/AFP Photo) 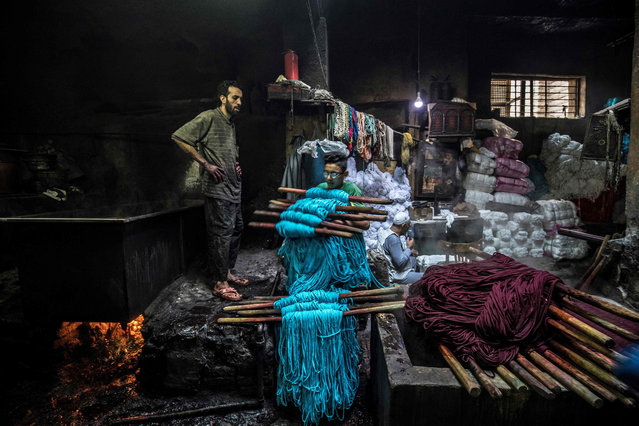 A workers carries away dyed yarns at a traditional hand-dying workshop in the Egyptian capital Cairo's centuries old district of Darb al-Ahmar on January 21, 2020. In Cairo's centuries-old Darb al-Ahmar district, Salama Mahmoud Salama's dye workshop is a multi-coloured den of textiles and busy workers colouring all kinds of fabrics. Salama and his relatives lay out the long, flowing threads, which will be used for everything from handmade shoes to rugs and drapes, and dip them in huge, piping-hot colour baths – no gloves or masks protecting them from the dyes and chemical fumes. The workshop in Islamic Cairo has been going strong for over a hundred years. (Photo by Khaled Desouki/AFP Photo) 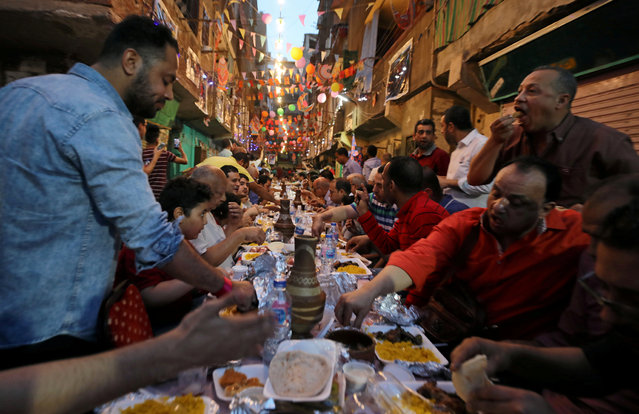 Residents of Ezbet Hamada in Cairo's Mataria district gather to eat Iftar, the meal to end their fast at sunset, during the holy fasting month of Ramadan in Cairo, Egypt, May 20, 2019. (Photo by Mohamed Abd El Ghany/Reuters) 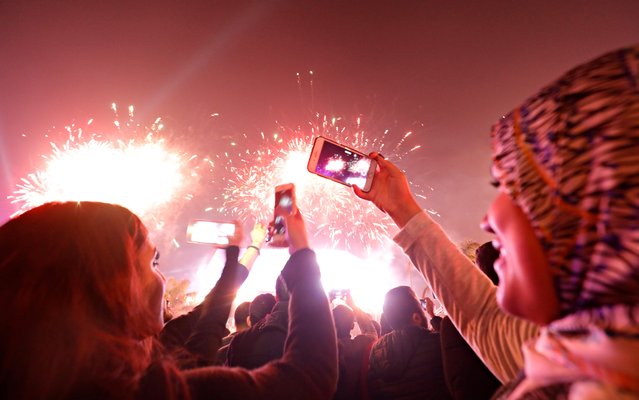 People record fireworks on mobile phones during a New Year celebrations at the Waterway in Cairo, Egypt on January 1, 2020. (Photo by Amr Abdallah Dalsh/Reuters) 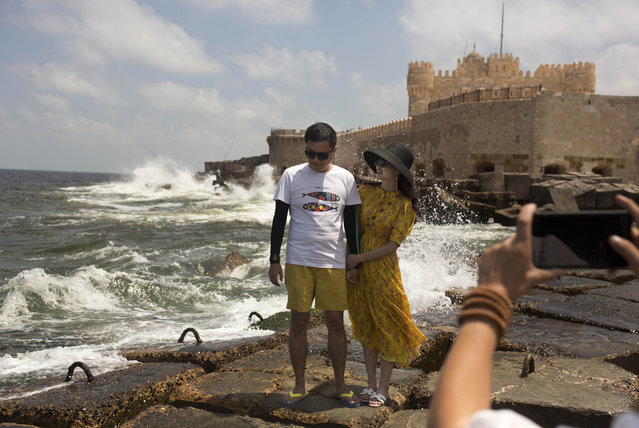 In this August 8, 2019, photo, a couple poses for a portrait on cement blocks placed as reinforcement against rising water levels near the citadel in Alexandria, Egypt. Egypt’s coastal city of Alexandria, which has survived invasions, fires and earthquakes since it was founded by Alexander the Great more than 2,000 years ago, now faces a new menace from climate change. Rising sea levels threaten to inundate poorer neighborhoods and archaeological sites, prompting authorities to erect concrete barriers out at sea to hold back the surging waves. (Photo by Maya Alleruzzo/AP Photo) 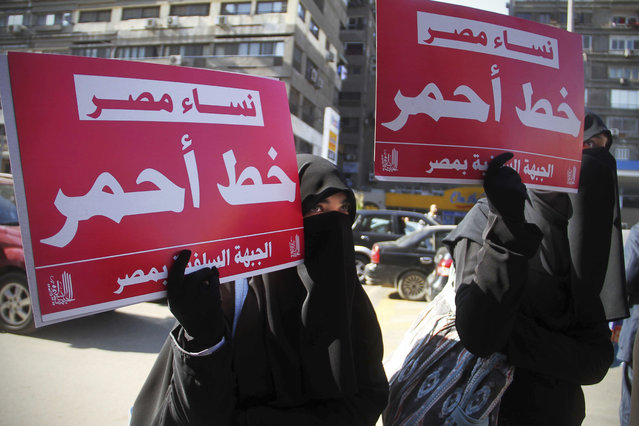 In this December 27, 2011, file photo, two women hold up banners in Arabic that read: “Egyptian women, red line”, during a rally supporting women's right in Cairo, Egypt. The prosecution of a 15-year-old girl who killed a bus driver after he allegedly tried to rape her in July 2019 has reignited debate over the treatment of women in Egypt's legal system, including blaming female victims of sexual violence and the practice of administering virginity tests. (Photo by Ahmed Ali/AP Photo/File) 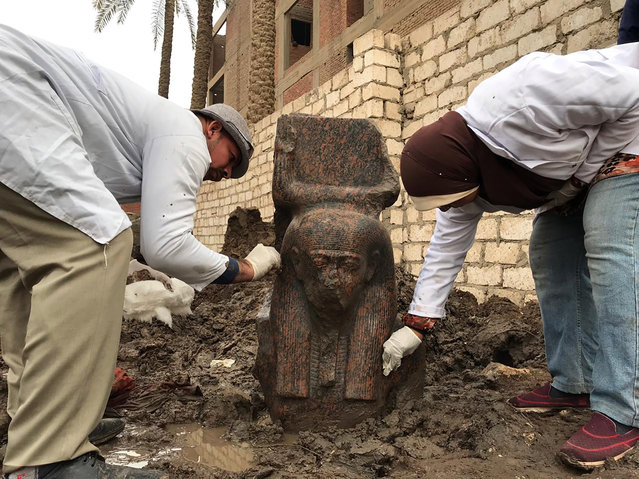 In this Wednesday, December 11, 2019, photo released by Egyptian Ministry of Antiquities, archaeology workers clean a small pink granite statue of Ramses II, near the ancient pyramids of Giza, Egypt. Archeologists in Egypt unveiled two new discoveries, the rare statue of Ramses II, one of the country’s most famous pharaohs, and a diminutive ancient sphinx that was found in the southern desert province of Minya. (Photo by Egyptian Ministry of Antiquities via AP Photo) 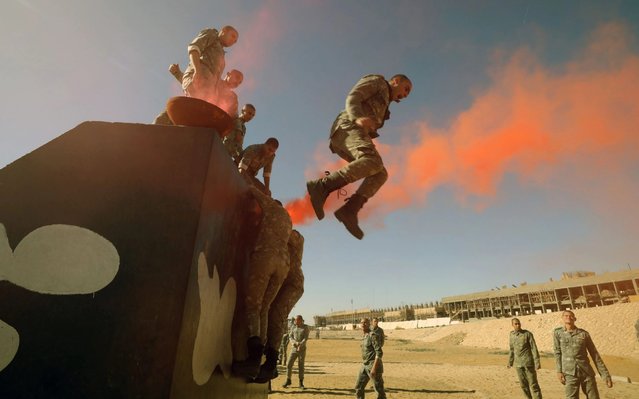 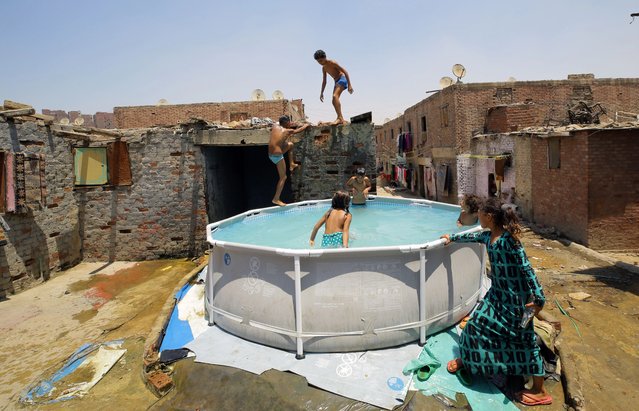 Egyptian children cool off in a makeshift swimming pool at Manshiyat Naser slum area, Cairo, Egypt, 24 July 2019. Temperatures have been higher than average in Egypt, reaching 40 degrees in Cairo and 46 in southern Egypt. (Photo by Khaled Elfiqi/EPA/EFE) 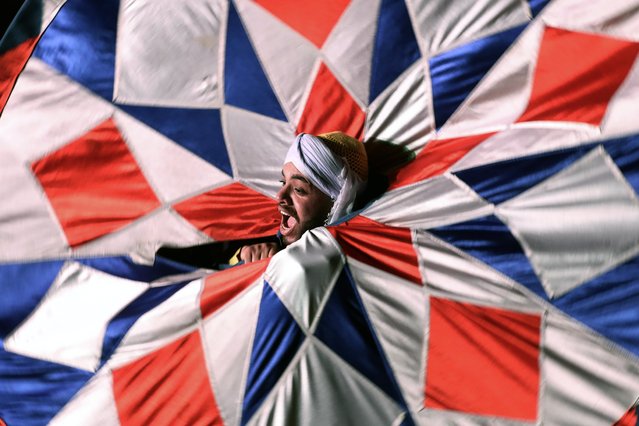 Egyptian dancers spin tanoura skirts during Ramadan Festival at Al Ghoury Palace in Cairo, Egypt, early 23 May 2019. Al Tanoura is usually practiced by Sufi Muslims and is a spiritual practice where spinning and discarding three skirts represents the circular movement of the world. (Photo by Khaled Elfiqi/EPA/EFE) 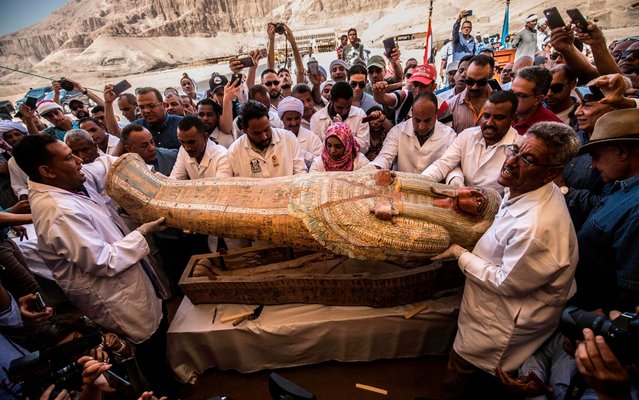 Egyptian archeologist open a wooden coffin belonging to a man in front Hatshepsut Temple at Valley of the Kings in Luxor on October 19, 2019. Egypt revealed on Saturday a rare trove of 30 ancient wooden coffins that have been well-preserved over millennia in the archaeologically rich Valley of the Kings in Luxor. (Photo by Khaled Desouki/AFP Photo) 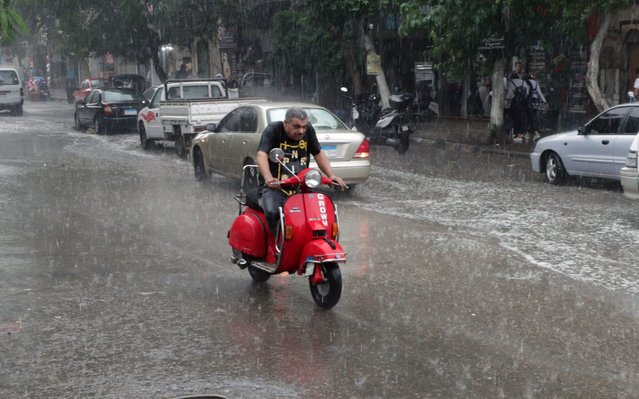 A man rides a motorcycle during rain shower in Cairo, Egypt, 22 October 2019. According to reports, showers are hitting Cairo as temperatu​res reach 21 degrees Celsius. (Photo by Khaled Elfiqi/EPA/EFE) 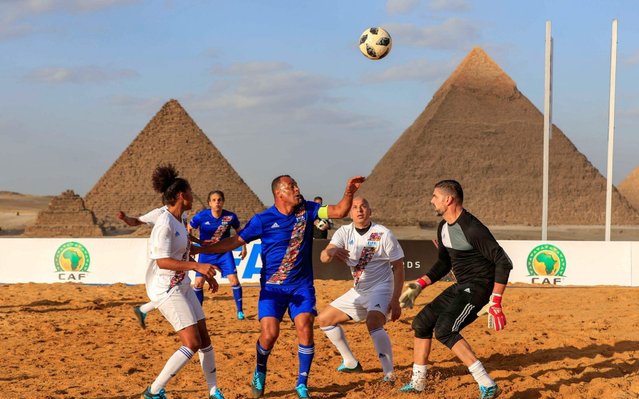 Brazilian footballer Denilson (C) and French football player Laura Georges (L) vie for the ball during the CAF and FIFA Legends football match, part of the CAF celebration of the best players in Africa, at the Giza pyramids plateau on the southwestern outskirts of the Egyptian capital Cairo on January 6, 2020. (Photo by Khaled Desouki/AFP Photo) 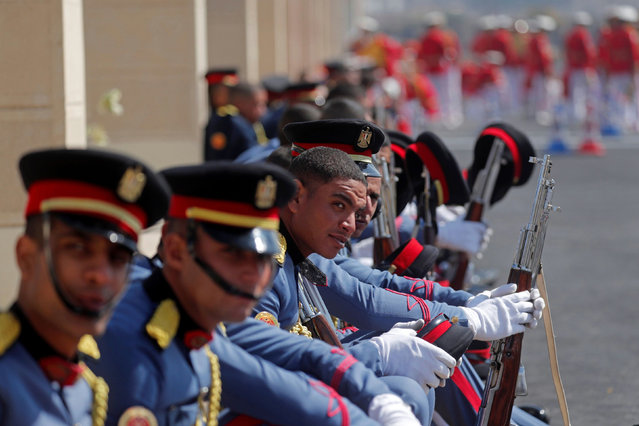 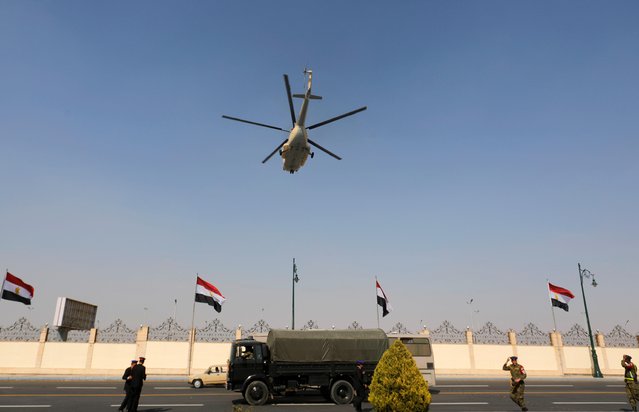 A helicopter carrying the coffin of former Egyptian President Hosni Mubarak flies during his funeral east of Cairo, Egypt on February 26, 2020. (Photo by Amr Abdallah Dalsh/Reuters) 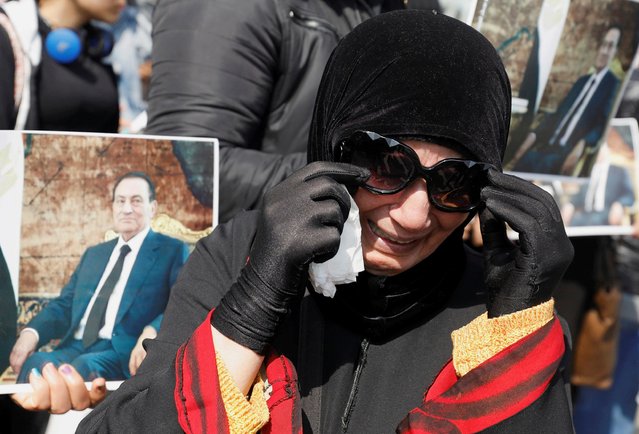