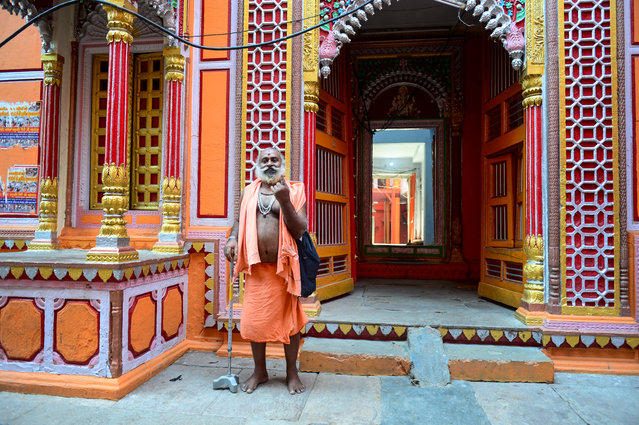 An Indian Sadhu (Hindu holy man) voter show his ink-marked finger after casting his vote in Varanasi in Uttar Pradesh state on May 19, 2019, during the 7th and final phase of India's general election. Voting in one of India's most acrimonious elections in decades entered its final day on May 19 as Hindu nationalist Prime Minister Narendra Modi scrambled to hang on to his overall majority. (Photo by Sanjay Kanojia/AFP Photo) 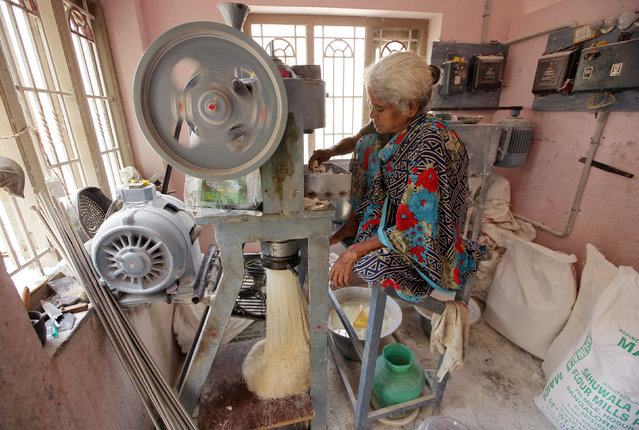 A woman makes vermicelli, a specialty eaten during the Muslim holy fasting month of Ramadan, at a factory in Chennai, India, May 28, 2019. (Photo by P. Ravikumar/Reuters) 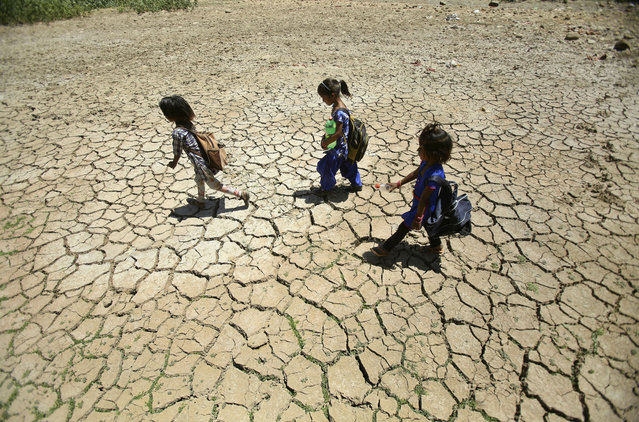 In this Thursday, May 30, 2019, file photo, children returning from school walk through a dried pond on a hot summer day on the outskirts of Jammu, India. Many parts of India are experiencing extreme heat conditions. (Photo by Channi Anand/AP Photo/File) 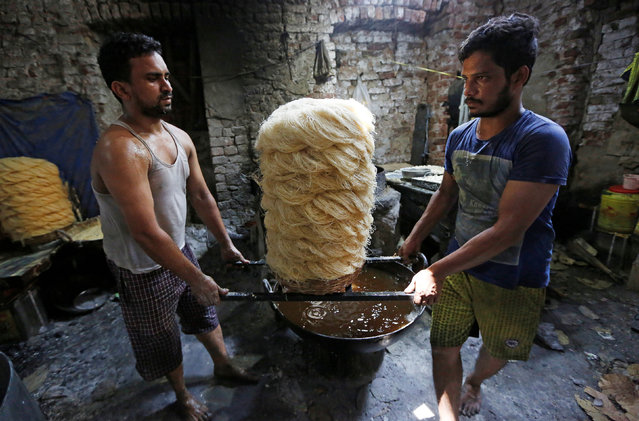 Men carry vermicelli, a specialty eaten during the Muslim fasting month of Ramadan, at a factory in Kolkata, India on May 27, 2019. (Photo by Rupak De Chowdhuri/Reuters) 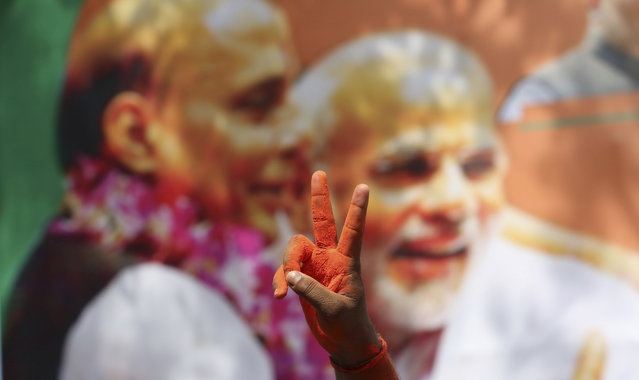 Bharatiya Janata Party (BJP) workers celebrate at BJP headquarters in, Lucknow, India, Thursday, May 23, 2019. Indian Prime Minister Narendra Modi and his party had a commanding lead as votes were counted Thursday after a six-week general election, sending the stock market soaring in anticipation of another five-year term for the Hindu nationalist leader. (Photo by Rajesh Kumar Singh/AP Photo) 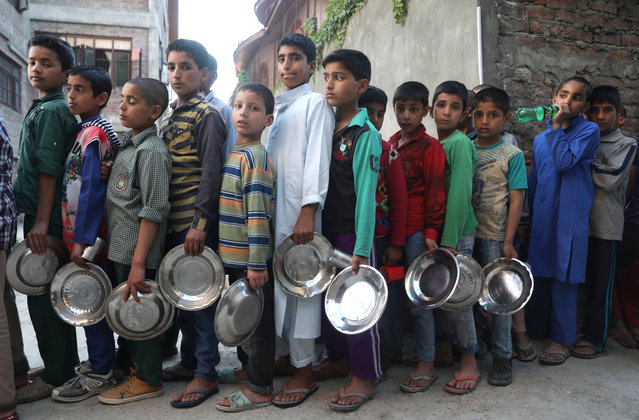 Kashmiri Muslim orphan children wait in a queue to receive food to break the fast at Rahat Manzil (Yateem Khana), an orphanage in Srinagar, the summer capital of Indian Kashmir, 21 May 2019. Muslims around the world celebrate the holy month of Ramadan by praying during the night time and abstaining from eating, drinking, and sexual acts during the period between sunrise and sunset. Ramadan is the ninth month in the Islamic calendar and it is believed that the revelation of the first verse in Koran was during its last 10 nights. (Photo by Farooq Khan/EPA/EFE) 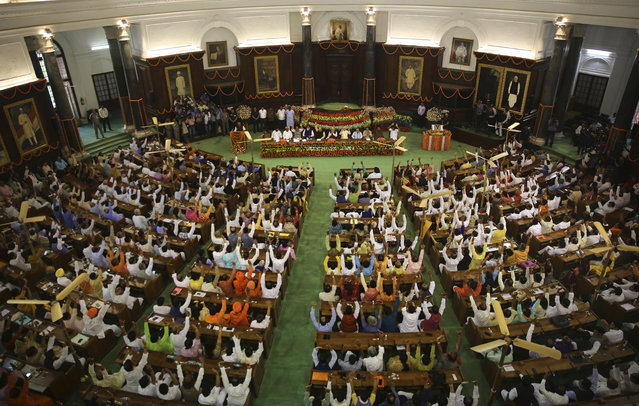 Newly elected lawmakers from India's ruling alliance led by the Hindu nationalist Bharatiya Janata Party raise their hands in support of Narendra Modi being elected their leader in New Delhi, India, Saturday, May 25, 2019. BJP president Amit Shah announced Modi's name as the leader of the National Democratic Alliance in a meeting of the lawmakers in the Central Hall of Parliament in New Delhi, paving the way for Modi's second five-year term as prime minister after a thunderous victory in national elections. (Photo by Manish Swarup/AP Photo) 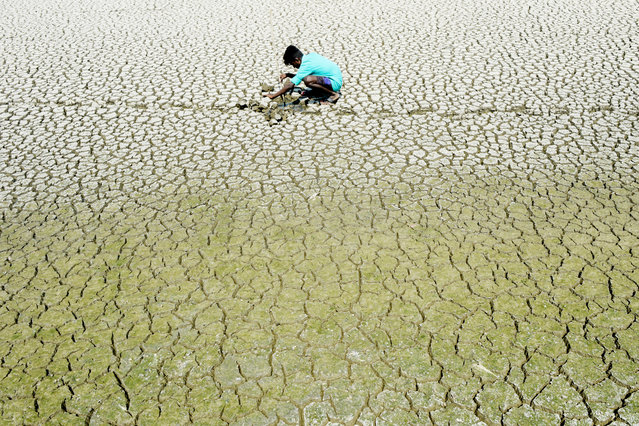 An Indian youth scouts around for mud crabs and snakehead fishes as he walks on the parched bed of Chembarambakkam lake on the outskirts of Chennai on May 21, 2019. Water levels in the four main reservoirs in Chennai has fallen to one of its lowest levels in 70 years, according to Indian media reports, with the current levels amounting to only 1.3 percent of full capacity. (Photo by Arun Sankar/AFP Photo) 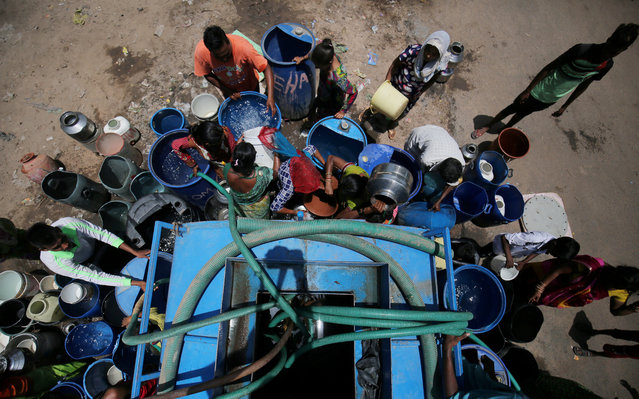 Local residents fill their empty containers with water from municipal corporation tanker on a hot summer day in Ahmedabad, India on May 20, 2019. (Photo by Amit Dave/Reuters) 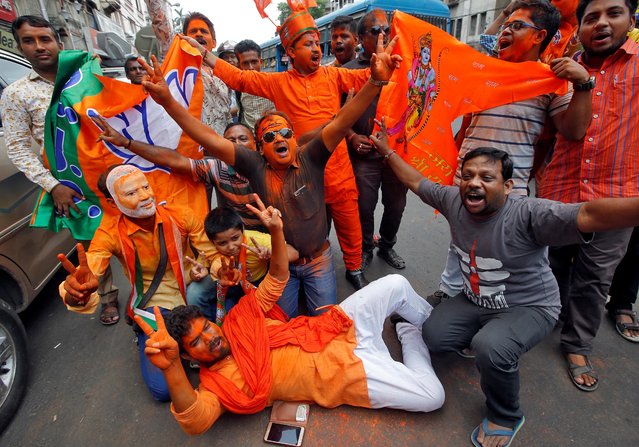 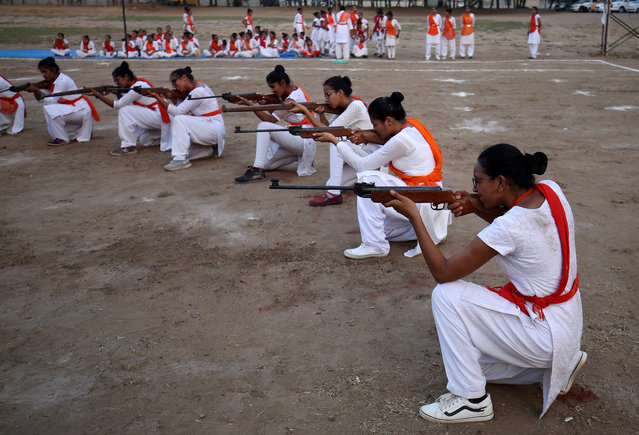 Members of Durga Vahini, the women's wing of Vishva Hindu Parishad (VHP), a Hindu nationalist organisation, show their self-defence skills with firearms at the concluding ceremony of a weeklong women's training camp on the outskirts of Ahmedabad, India on May 25, 2019. (Photo by Amit Dave/Reuters) 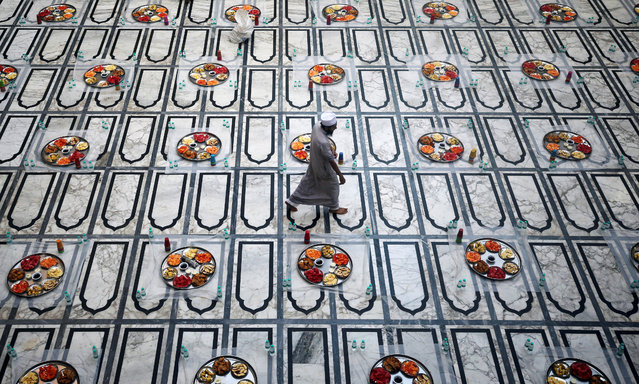 A Muslim man walks after arranging the Iftar (breaking fast) meals inside a mosque during the holy fasting month of Ramadan in Mumbai, India, May 27, 2019. (Photo by Francis Mascarenhas/Reuters) 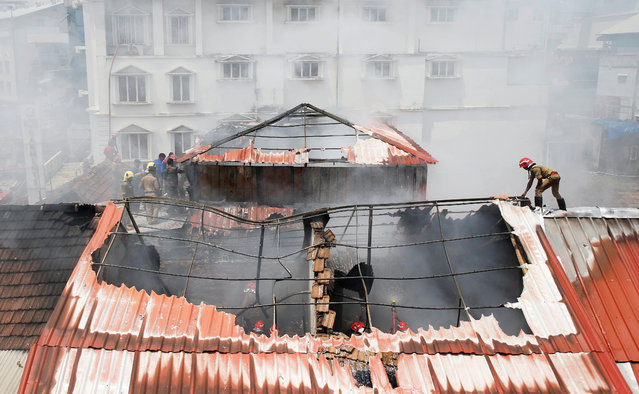 A firefighter walks on the rooftop as others try to douse a fire that broke out at a wholesale market in Kochi, India, May 27, 2019. (Photo by Sivaram V/Reuters) 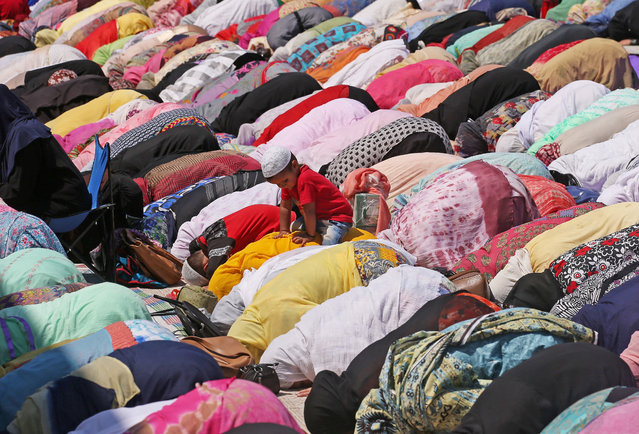 A boy sits on his mother's back as she and others Muslim women pray during the death anniversary of Hazrat Ali, son-in-law of Prophet Mohammad, at Hazratbal shrine during the holy month of Ramadan in Srinagar on May 27, 2019. (Photo by Danish Ismail/Reuters) 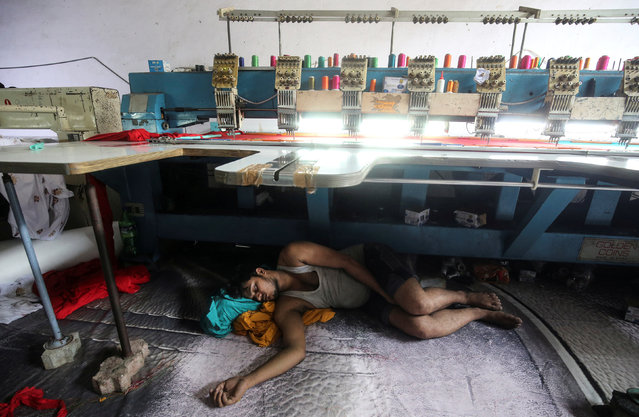 A worker sleeps underneath an embroidery machine at a workshop in Mumbai, India, May 31, 2019. (Photo by Francis Mascarenhas/Reuters) 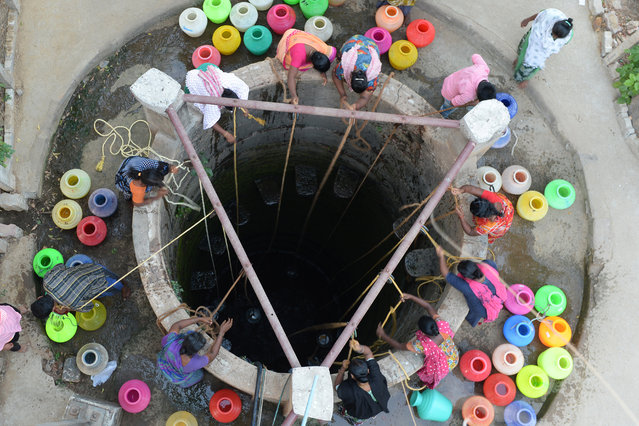 Indian residents fetch drinking water from a well in the outskirts of Chennai on May 29, 2019. Water levels in the four main reservoirs in Chennai have fallen to one of its lowest levels in 70 years, according to Indian media reports. (Photo by Arun Sankar/AFP Photo) 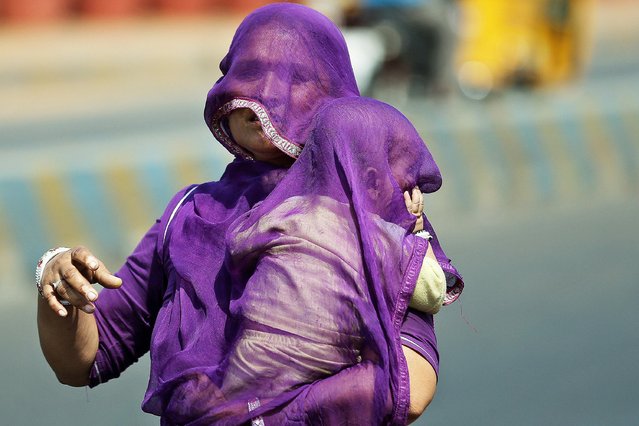 An Indian woman carrying a child uses a part of her sari to shield themselves from sun on a hot summer day in Hyderabad, India, Tuesday, May 28, 2019. The city has been experiencing extreme heat conditions with temperature recorded at 43 degrees Celsius (109.4 Fahrenheit) on Tuesday. (Photo by Mahesh Kumar A./AP Photo) 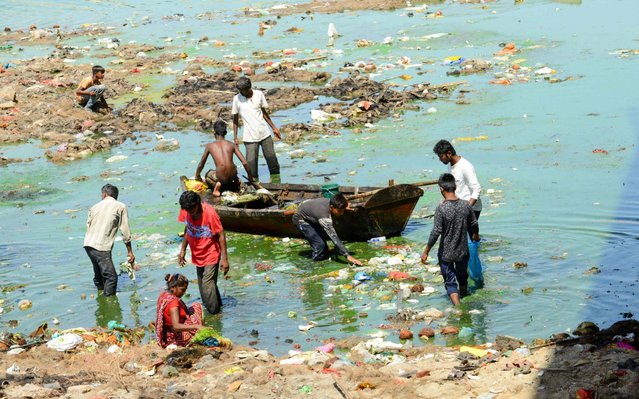 Indian workers collect and remove trash with a boat as they take part in the cleaning of the Sabarmati river in Ahmedabad on May 21, 2019. In order to repair gates of the Vasna Dam and clean the Sabarmati river, some portions of it have been dried and tons of daily trash have been removed. (Photo by Sam Panthaky/AFP Photo) 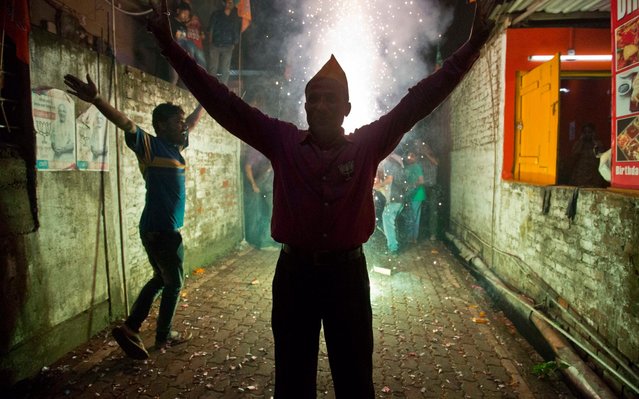 Bharatiya Janata Party (BJP) supporters celebrate at the party office in Gauhati, India, Thursday, May 23, 2019. Indian Prime Minister Narendra Modi's party claimed it had won reelection with a commanding lead in Thursday's vote count, while the stock market soared in anticipation of another five-year term for the pro-business Hindu nationalist leader. (Photo by Anupam Nath/AP Photo) 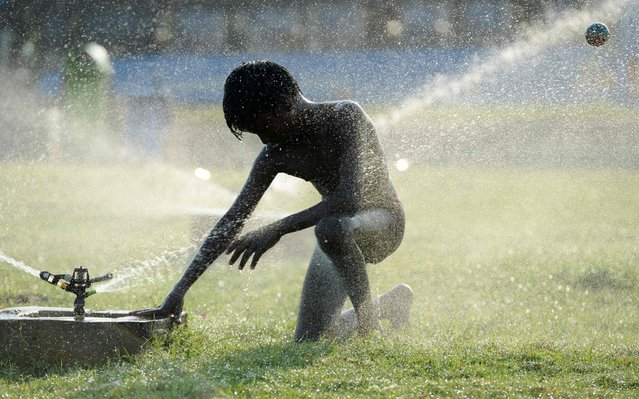 An Indian boy plays with water sprinklers at Marina Beach during a hot day in Chennai on May 27, 2019. (Photo by Arun Sankar/AFP Photo) 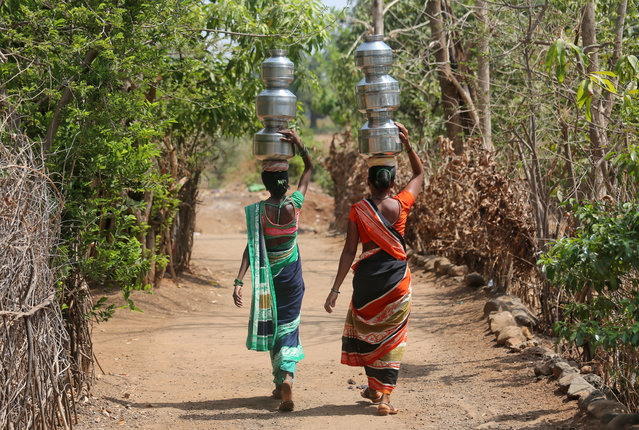 Women carry pitchers after filling them with water from a hand pump to their houses in Thane district in the western state of Maharashtra, India, May 30, 2019. (Photo by Francis Mascarenhas/Reuters)
Edit Del
04 Jun 2019 00:01:00, post received 0 comments
Publication archive:
←   →
Popular tags:
All tags
Last searches: