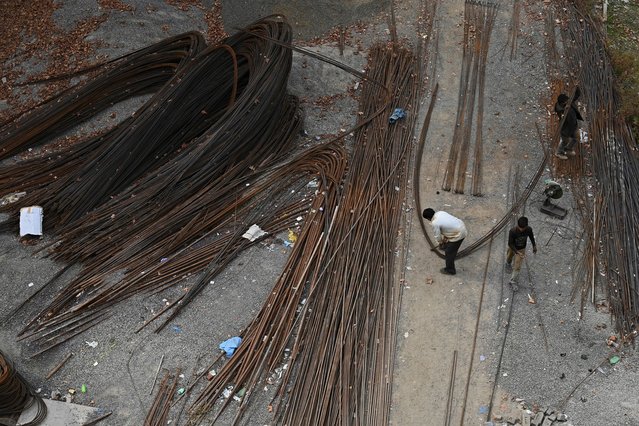 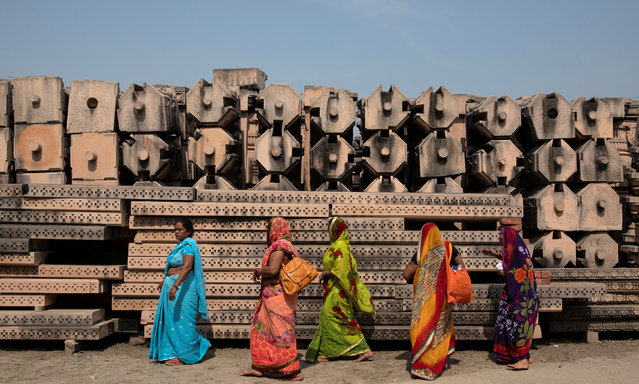 Devotees walk past the pillars that Hindu nationalist group Vishva Hindu Parishad (VHP) say will be used to build a Ram temple at the disputed religious site in Ayodhya, India, October 22, 2019. (Photo by Danish Siddiqui/Reuters) 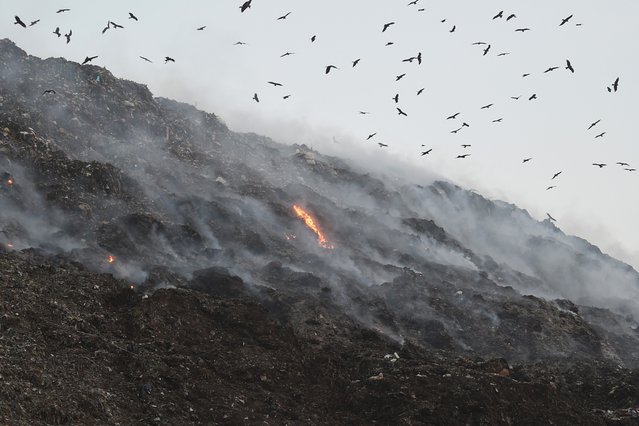 Birds fly as smoke billows from a fire in a landfill on the outskirts of Ahmedabad on November 4, 2019. (Photo by Sam Panthaky/AFP Photo) 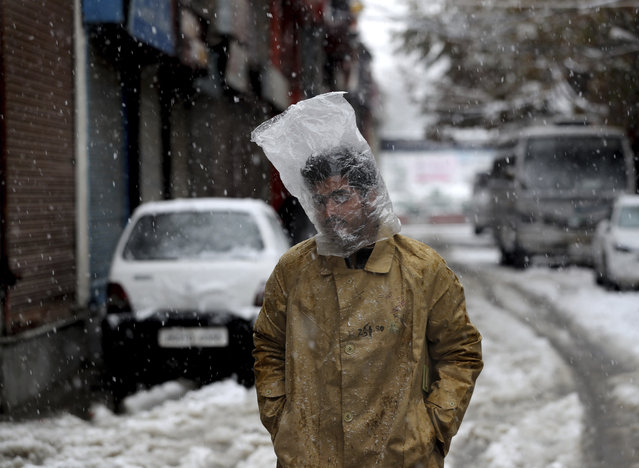 A Kashmiri man cover his head with plastic bag as it snows in Srinagar, Indian controlled Kashmir, Thursday, November 7, 2019. The region received its first snow on Wednesday, bringing temperatures down drastically and affecting air and vehicular traffic. (Photo by Mukhtar Khan/AP Photo) 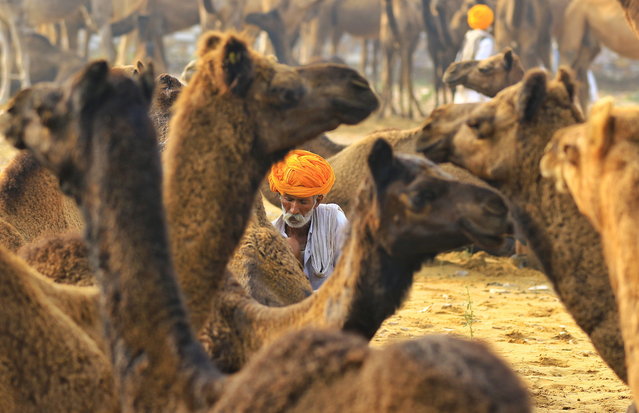 A Rajasthani camel vendor sits among camels during the Pushkar Fair 2019 in Pushkar, Rajasthan, India, 04 November 2019. Pushkar Cattle Fair is one of the world's largest cattle fairs, and the festival hosts around 50,000 camels which are sold, decorated, shaved and raced. (Photo by Vishal Bhatnagar/EPA/EFE) 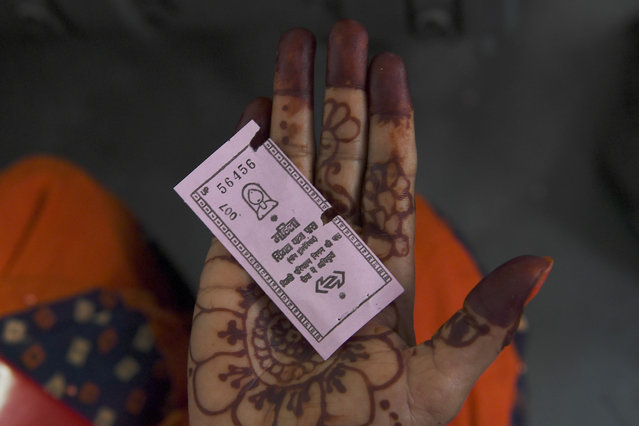 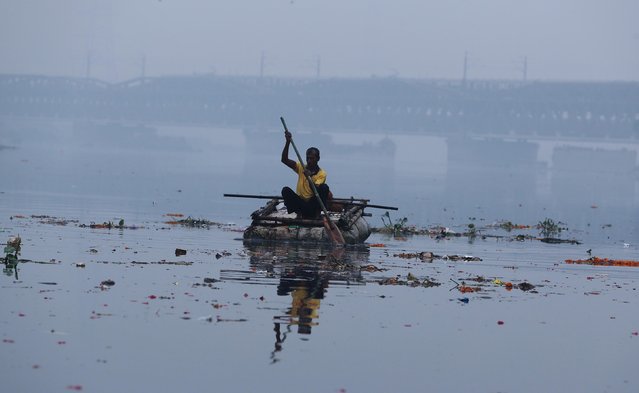 A man paddles a home-made boat across Yamuna river on a smoggy afternoon in the old quarters of Delhi, India, October 30, 2019. (Photo by Adnan Abidi/Reuters) 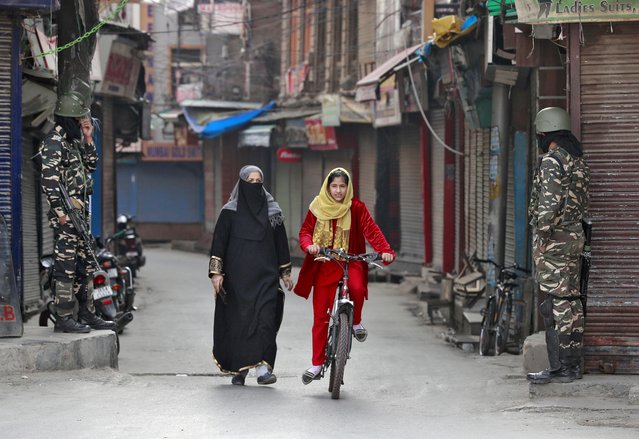 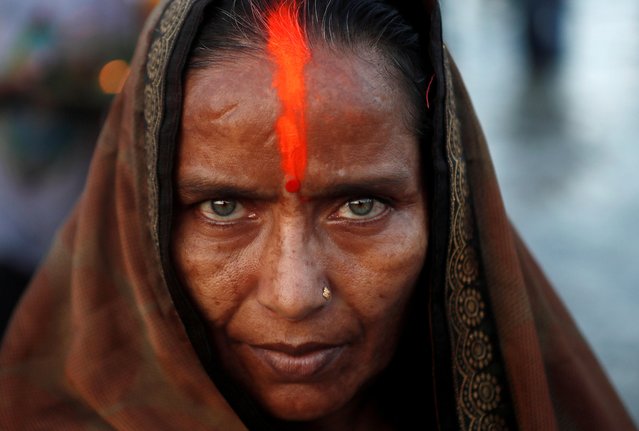 A Hindu woman worships the Sun god in the waters of the Arabian Sea during the religious festival of Chhath Puja in Mumbai, India, November 3, 2019. (Photo by Francis Mascarenhas/Reuters) 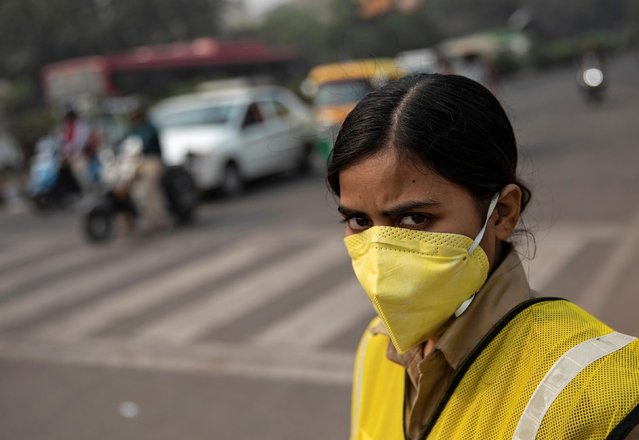 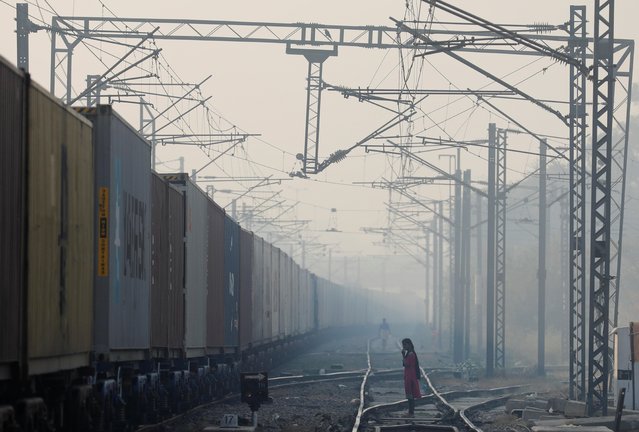 A girl waits to cross the railway line on a smoggy morning in New Delhi, India, November 5, 2019. (Photo by Anushree Fadnavis/Reuters) 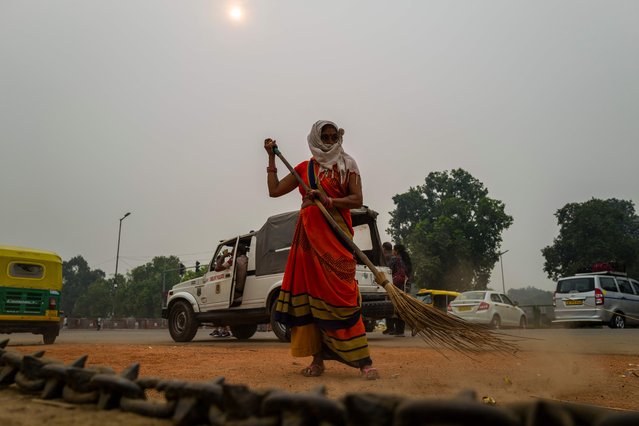 A woman sweeps a street near India Gate under heavy smog in New Delhi on October 29, 2019. Photo by Jewel Samad/AFP Photo) 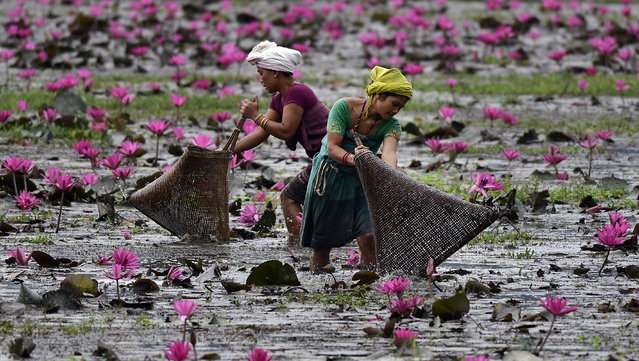 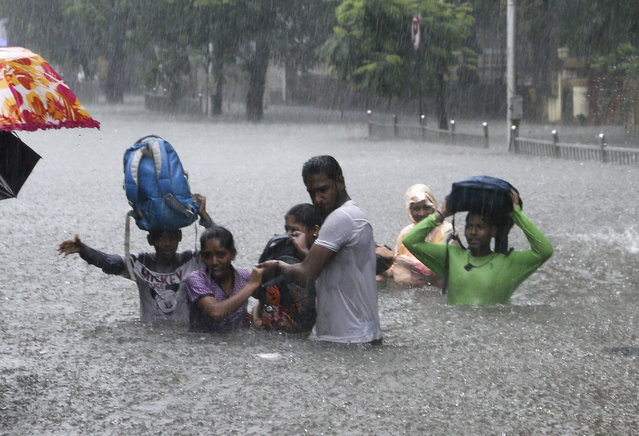 In this September 4, 2019, file photo, people hold hands and navigate their way through a flooded street as it rains in Mumbai, India. The number of people threatened by climate change-triggered flooding is about three times higher than previously thought, a new study says. But it's not because of more water. It's because the land, especially in Asia and the developing world, is several feet lower than what space-based radar has calculated, according to a study in the journal Nature Communications Tuesday, Oct. 29. (Photo by Rajanish Kakade/AP Photo/File) 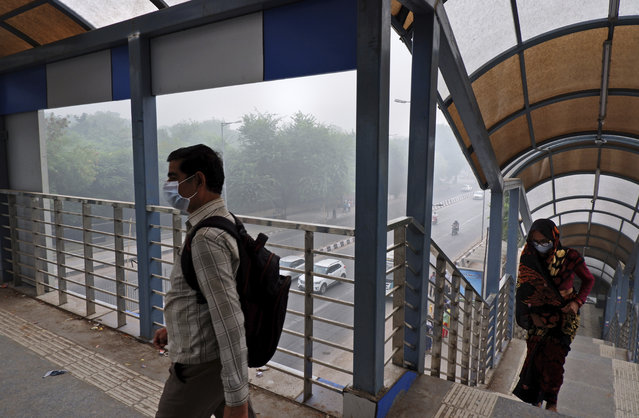 In this Sunday, November 3, 2019, photo, Indians wear pollution mask and cross over a pedestrian bridge amidst thick layer of smog in New Delhi, India. Authorities in New Delhi are restricting the use of private vehicles on the roads under an “odd-even” scheme based on license plates to control vehicular pollution as the national capital continues to gasp under toxic smog. (Photo by Manish Swarup/AP Photo) 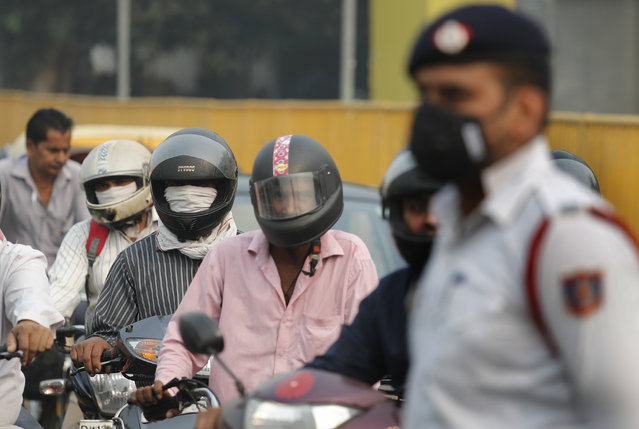 Motorcyclists cover their faces with scarf to save themselves from air pollution as they wait at a crossing in New Delhi, India, Monday, November 4, 2019. (Photo by Manish Swarup/AP Photo) 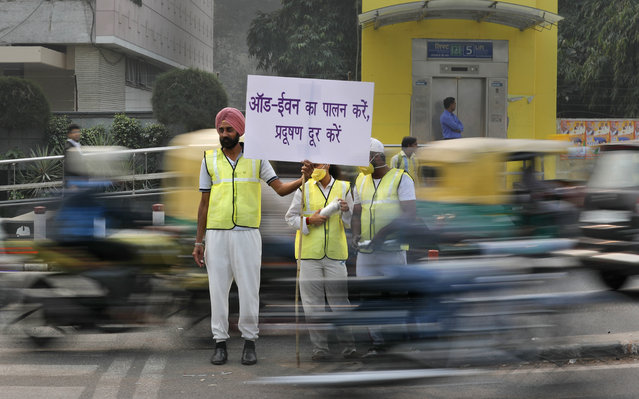 Volunteers wear pollution masks as they stand at a busy crossing with the banner saying obey odd and even, remove pollution, in New Delhi, India, Monday, November 4, 2019. (Photo by Manish Swarup/AP Photo) 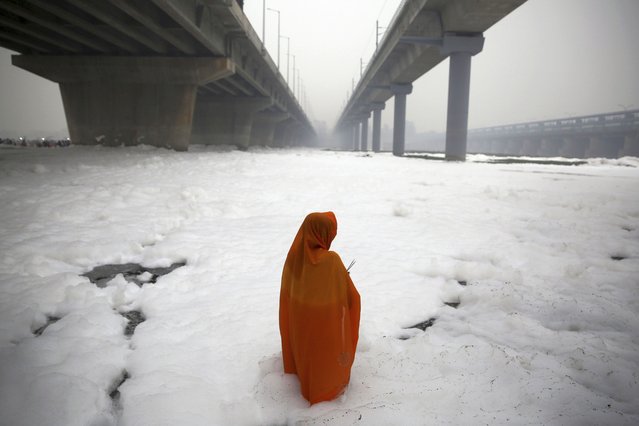 In this Saturday, November 2, 2019, file photo, an Indian Hindu devotee performs rituals in the Yamuna river, covered with chemical foam caused by industrial and domestic pollution, during Chhath Puja festival in New Delhi, India. Schools have reopened in the Indian capital with toxic air level coming down by more than half since authorities declared a health emergency last Friday. Authorities are tackling a large amount of toxic foam floating in the Yamuna River, caused partly by high ammonia levels emanating from industrial pollutants. (Photo by Altaf Qadri/AP Photo/File) 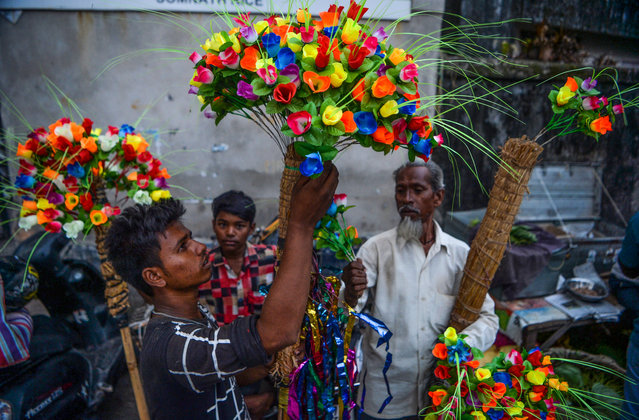 Vendors sell artificial flowers at a roadside market on the eve of the Chhath Puja Festival in Siliguri on November 1, 2019. The Chhath Festival, also known as Surya Pooja, or worship of the sun, is observed in some parts of the northern Indian states, and sees devotees worshipping the sun god on the banks of rivers or small ponds, and praying for the longevity and health of their spouse. (Photo by Diptendu Dutta/AFP Photo) 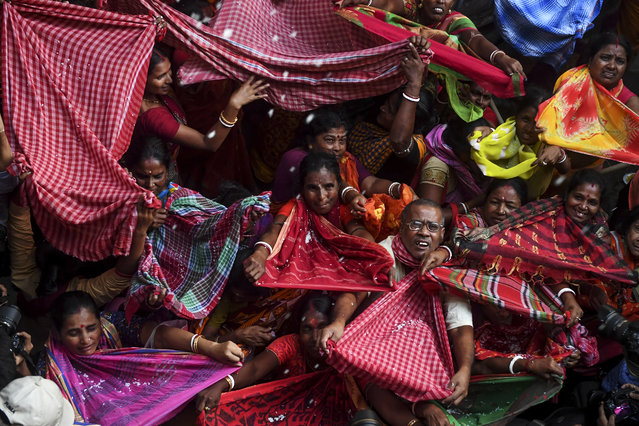 Hindu devotees collect rice as offerings distributed by the temple authority on the occasion of the “Annakut” or “Govardhan Puja” festival at the Madan Mohan temple in Kolkata on October 29, 2019. People in large numbers gather at the temple and collect the rice offerings in the belief that the rice will keep them in good condition and never in life will they face poverty or scarcity of food. (Photo by Dibyangshu Sarkar/AFP Photo) 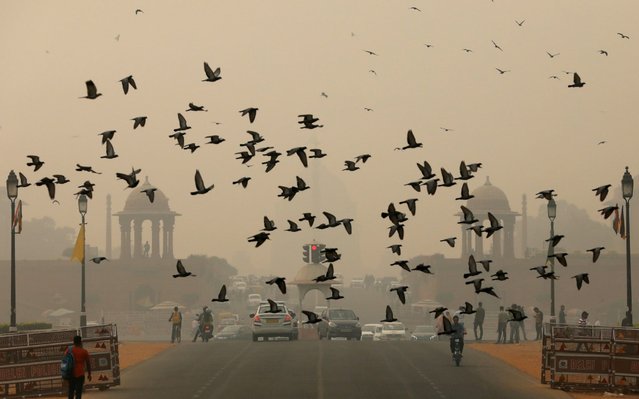 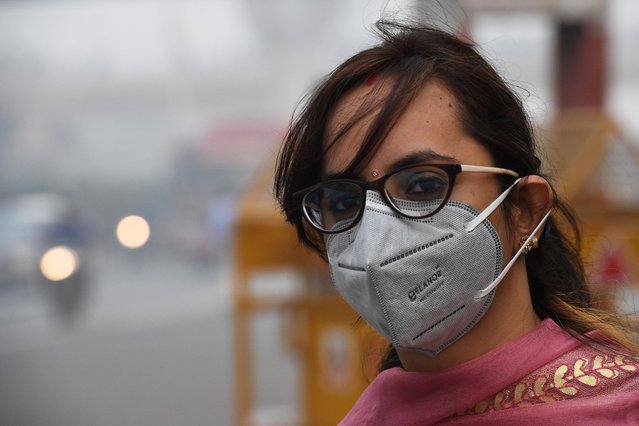 A woman wearing a protective face mask waits for public bus in smoggy conditions in New Delhi on November 4, 2019. Millions of people in India's capital started the week on November 4 choking through “eye-burning” smog, with schools closed, cars taken off the road and construction halted. (Photo by Prakash Singh/AFP Photo) 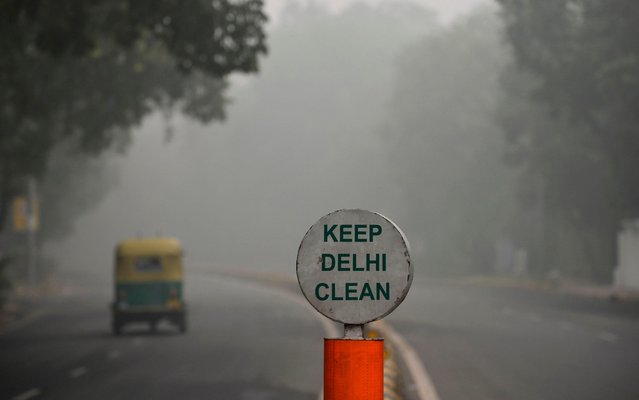