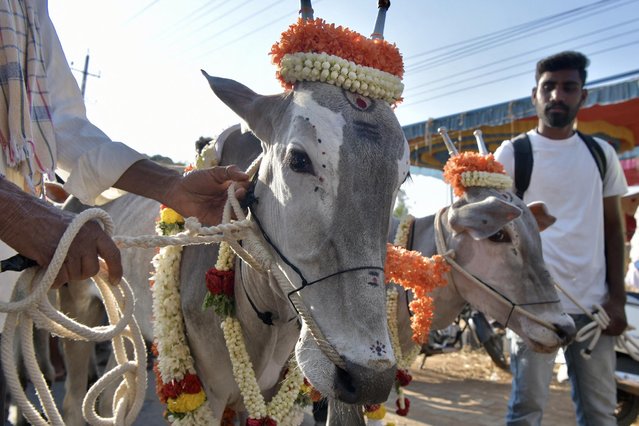 Oxen belonging to farmers are taken on procession to pay obeisance to Hindu deity Basava (also know as Nandi), the vehicle of Lord Shiva during an annual fair held in Thotagere village prior to Hindu festival Shivarathri, on the outskirts of Bangalore on March 9, 2021. (Photo by Manjunath Kiran/AFP Photo) 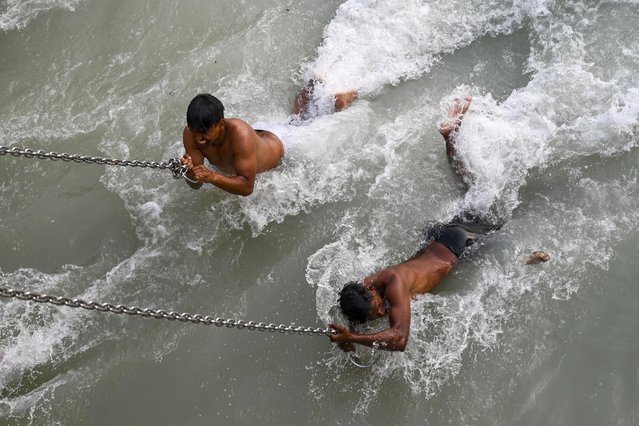 Hindu devotees take a holy dip in the waters of the River Ganges on the eve of Shahi Snan (grand bath) on Maha Shivratri festival during the ongoing religious Kumbh Mela festival in Haridwar on March 10, 2021. (Photo by Prakash Singh/AFP Photo) 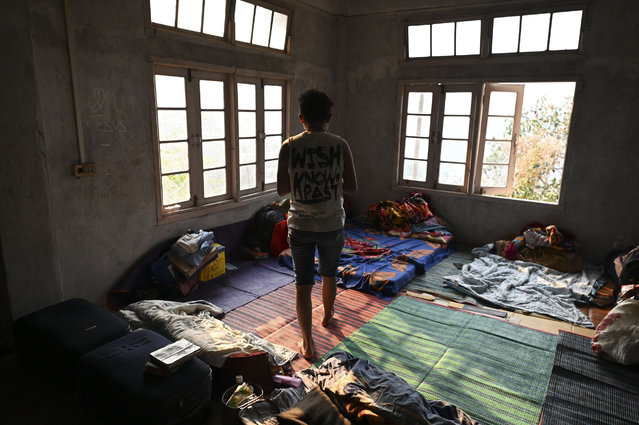 A Myanmarese policeman, who fled Myanmar and crossed illegally to India, stands in a temporary shelter at an undisclosed location in India's northeastern state of Mizoram on March 13, 2021. Scores of Myanmar policemen and their families have now fled to India, security officials said on March 12, with one officer telling AFP that the authorities are “beating and torturing” protestors. (Photo by Sajjad Hussain/AFP Photo) 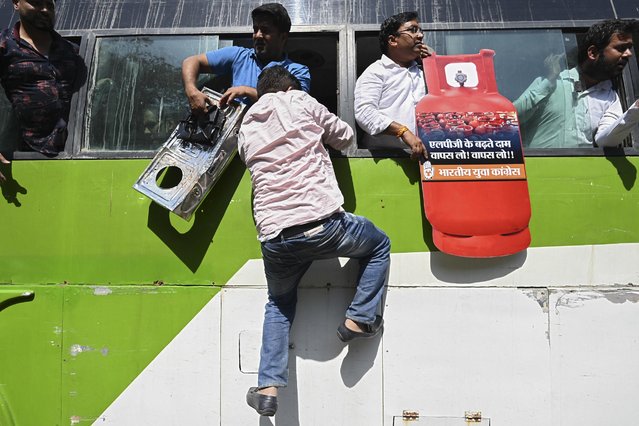 An activist of the Indian Youth Congress (IYC) escapes thorugh a window of the bus after he was detained by police during a protest against the recent price hike of fuel and Liquefied Petroleum Gas (LPG) outside the Ministry of Petroleum and Natural Gas in New Delhi on March 2, 2021. (Photo by Money Sharmaa/AFP Photo) 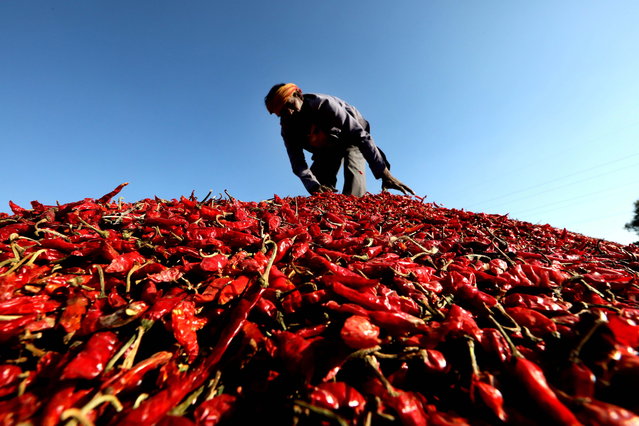 A worker sorts red chillies after harvesting in the fields in Indore, India, 08 February 2021 (issued 09 February 2021). The west region of Nimar in the state of Madhya Pradesh is one of the largest producers of red chillies in India. (Photo by Sanjeev Gupta/EPA/EFE) 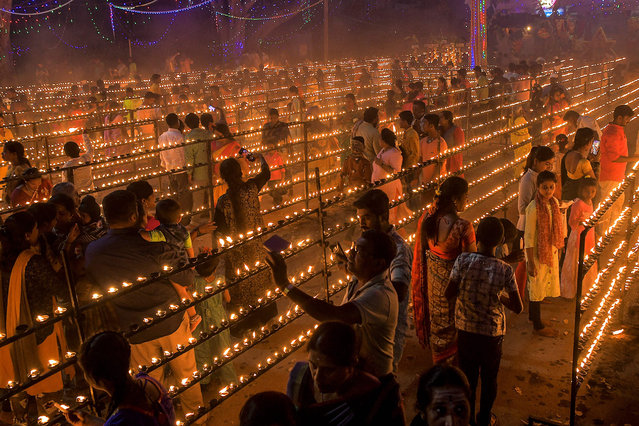 Hindu devotees light oil lamps during Lakshadeepotsava, the festival of a hundred thousand lamps, during the Shivarathri festival at the Basavanna Temple on the outskirts of Bangalore on March 11, 2021. (Photo by Manjunath Kiran/AFP Photo) 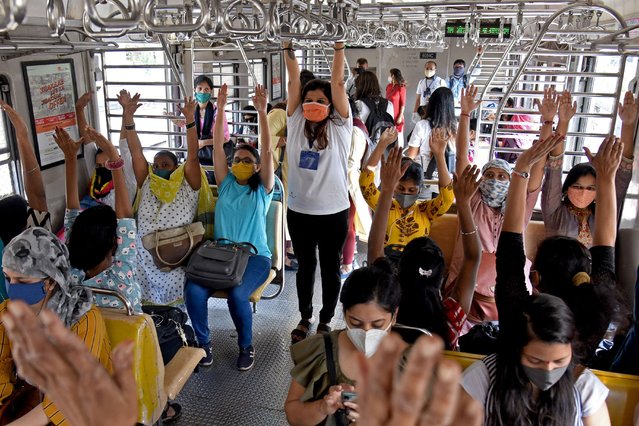 A yoga instructor (C) guides female passengers exercise while commuting on the ladies compartment of a local train in Mumbai on March 8, 2021 on the International Women's Day. (Photo by Sujit Jaiswal/AFP Photo) 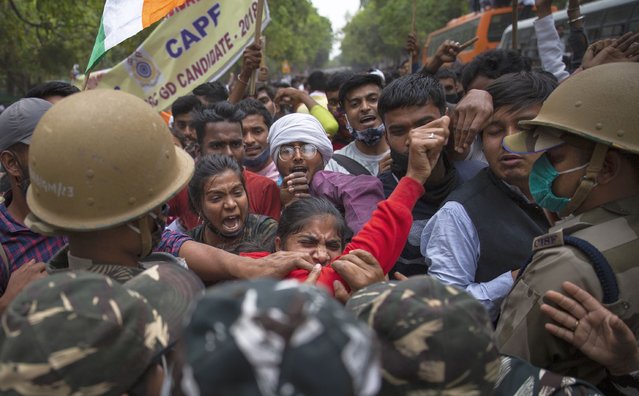 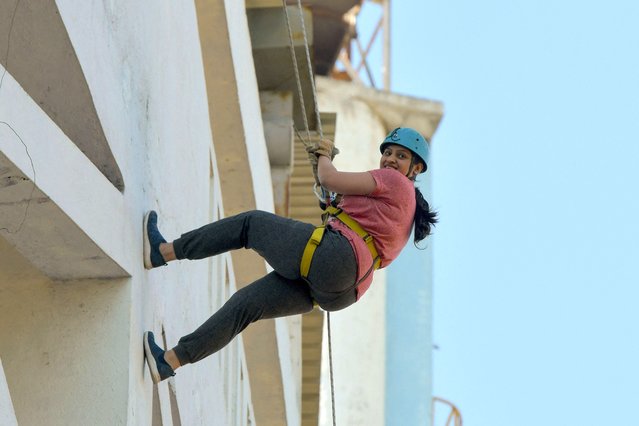 A youth rappels down the face of the Kanteerava Outdoor Stadium as part of a program held on the occasion of International Women's Day, in Bangalore on March 8, 2021. (Photo by Manjunath Kiran/AFP Photo) 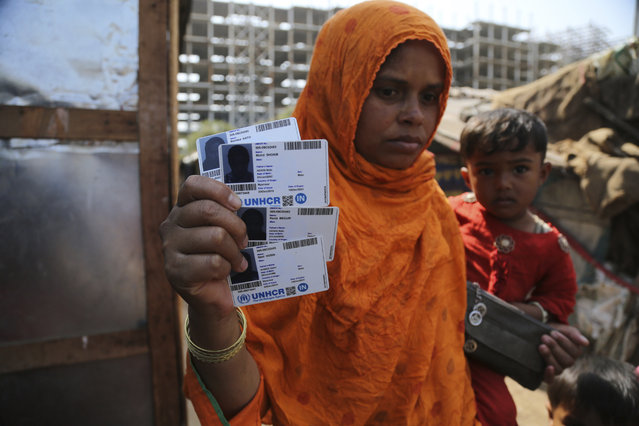 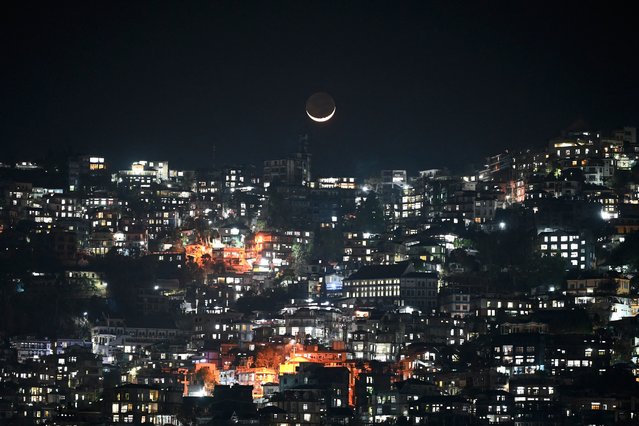 A general view shows a crescent moon over homes on a hillside in Aizawl, the capital of the northeastern Indian state of Mizoram on March 16, 2021. (Photo by Sajjad Hussain/AFP Photo) 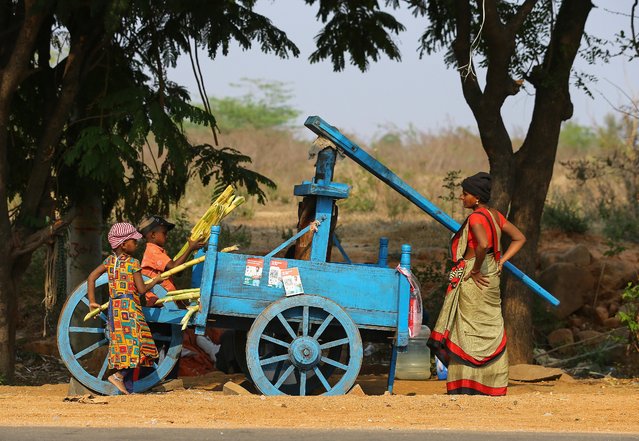 Indian children help a woman to extract juice from sugarcane as she sells them by a roadside on the outskirts of Hyderabad, India, Tuesday, March 16, 2021. (Photo by Mahesh Kumar A./AP Photo) 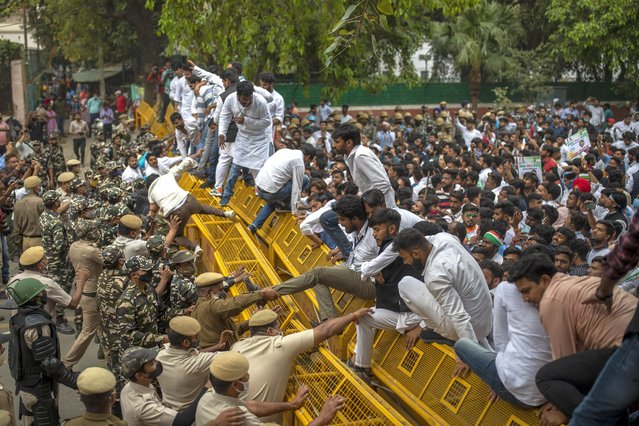 Indian police officers try to pull down members of National Students Union of India (NSUI), the student body of the Congress party, who climbed on police barricades during a protest against rising unemployment in the country in New Delhi, India, Friday, March 12, 2021. (Photo by Altaf Qadri/AP Photo) 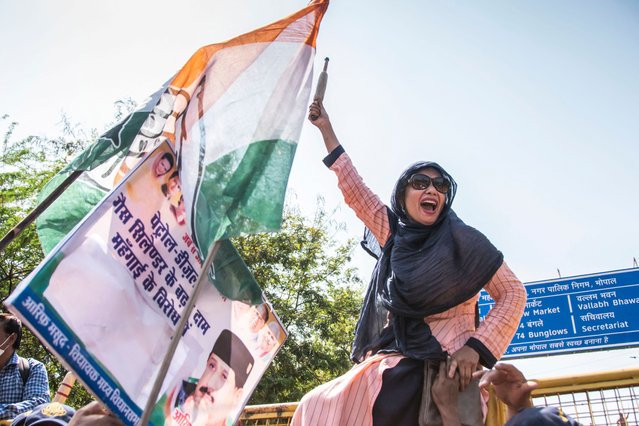 Madhya Pradesh Mahila Congress workers raise slogans during a protest against the rise in prices of commodities on International Women's Day in Bhopal, India on March 8, 2021. (Photo by Gagan Nayar/AFP Photo) 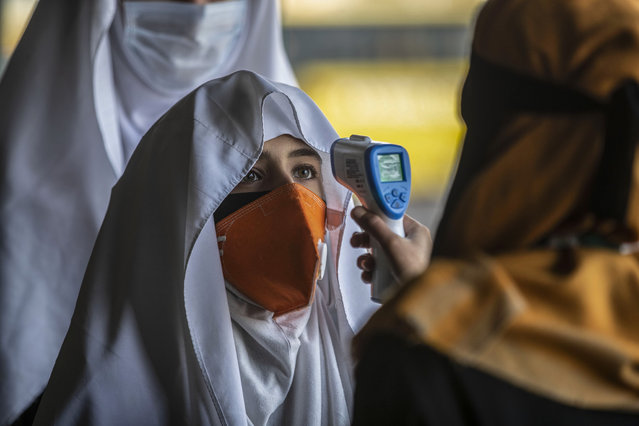 A staff member checks the temperature as students arrive to attend their school in Srinagar, Indian controlled Kashmir, Monday, March 15, 2021. Schools reopened for the lower grades Monday in Indian-controlled Kashmir, eleven months after being closed due to the coronavirus pandemic. (Photo by Mukhtar Khan/AP Photo) 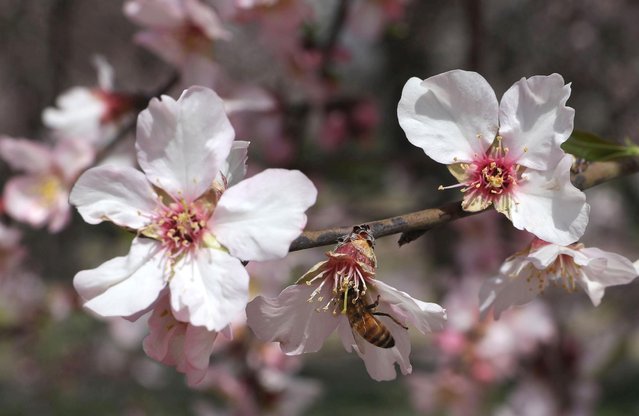 A honey bee sucks nectar out of an almond flower at a garden in downtown area of Srinagar, the summer capital of Indian Kashmir, 18 March 2021. Almond bloom heralds arrival of spring season in Kashmir after a long spell of winter. (Photo by Farooq Khan/EPA/EFE) 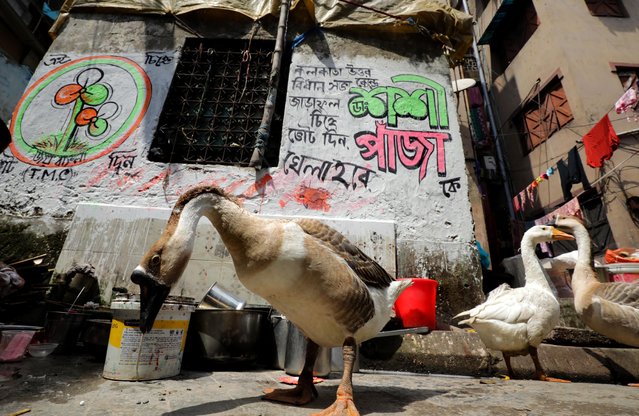 Animals seen in front of a wall graffiti of Trinamool Congress party, ahead of assembly election in Kolkata, India, 18 March 2021. The 2021 West Bengal Legislative Assembly elections are scheduled to be held in 8 phases between 27 March to 29 April 2021. (Photo by Piyal Adhikary/EPA/EFE) 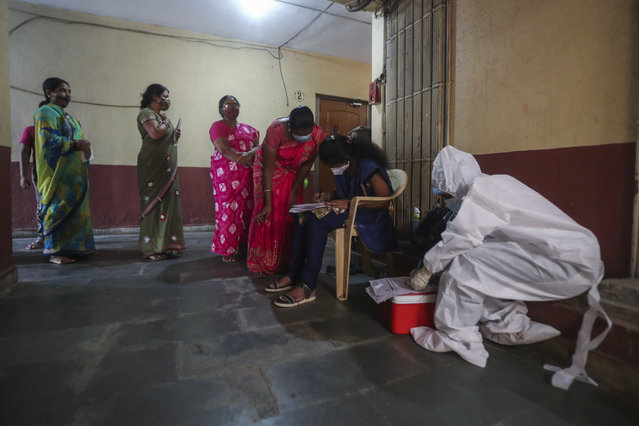 People register themselves to get tested during a door-to-door screening for COVID-19 people at Dharavi, one of Asia's largest slums, in Mumbai, India, Wednesday, March 17, 2021. (Photo by Rafiq Maqbool/AP Photo) 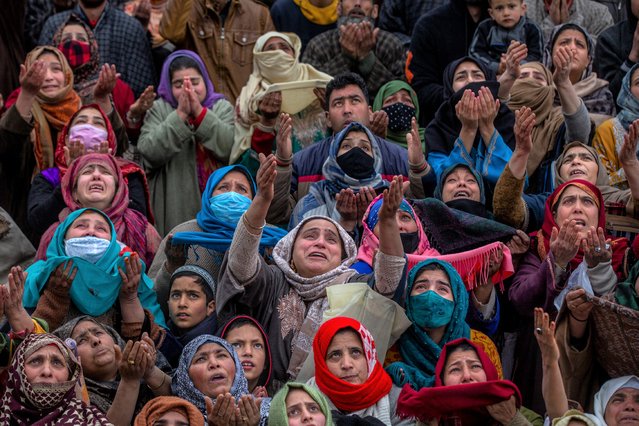 Kashmiri Muslim women pray as the head priest displays a relic at the Hazratbal shrine on the occasion of Mehraj-u-Alam, believed to mark the ascension of Prophet Muhammad to heaven, in Srinagar, Indian controlled Kashmir, Friday, March 12, 2021. Thousands of Kashmiri Muslims gathered at the Hazratbal shrine, which houses a relic believed to be a hair from the beard of Islam's Prophet Muhammad. (Photo by Dar Yasin/AP Photo) 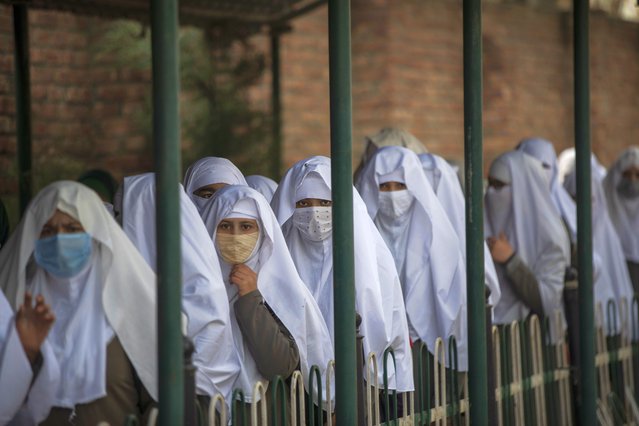 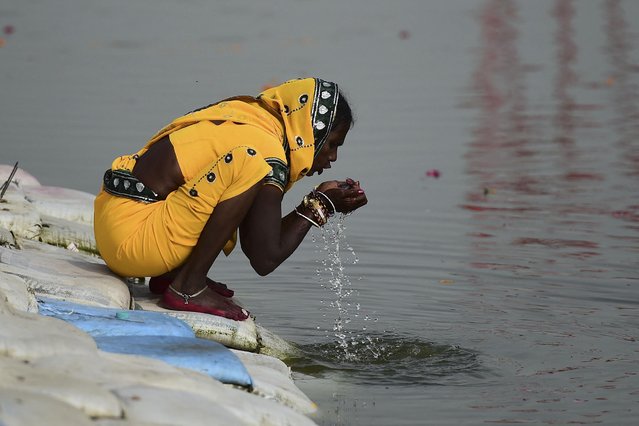