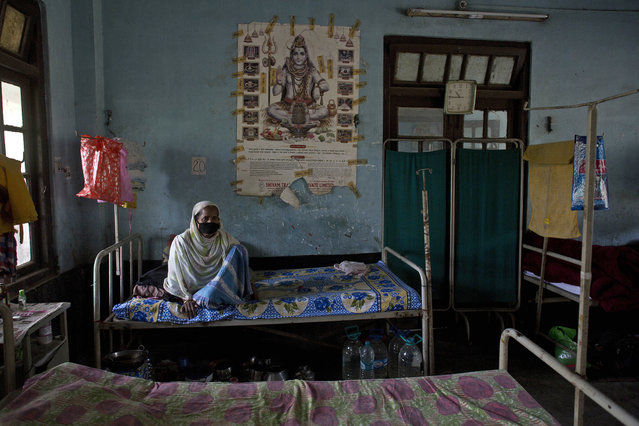 An Indian tuberculosis patient rests on a bed at a TB hospital on World Tuberculosis Day in Gauhati, India, Saturday, March 24, 2018. Earlier this month Indian Prime Minister Narendra Modi launched a campaign to fast-track the India's response to tuberculosis, which is now the world's leading infectious killer. (Photo by Anupam Nath/AP Photo) 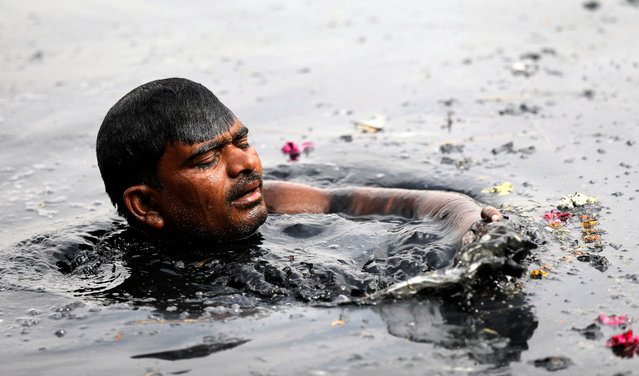 An Indian man looks for coins and other offerings, thrown by mainly Hindu devotees after their worship, in the polluted Yamuna River in New Delhi, India, 14 March 2018. On 14 March every year environmental activists globally hold the International Day of Action for Rivers with the aim of raising awareness around issues concerning the world's water ways. International Day of Action for Rivers was founded in 1997 in Curitiba, Brazil. (Photo by Rajat Gupta/EPA/EFE) 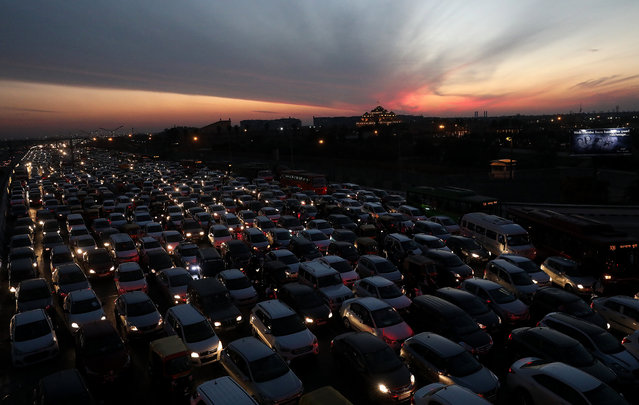 Vehicles are trapped in a traffic jam on the Akshardham crossing National Highway-24 at New Delhi, India, 06 March 2018. According to reports, the Indian capital is struggling with severe air pollution levels mainly caused by vehicle emissions and crop burning in neighboring states. (Photo by Harish Tyagi/EPA/EFE) 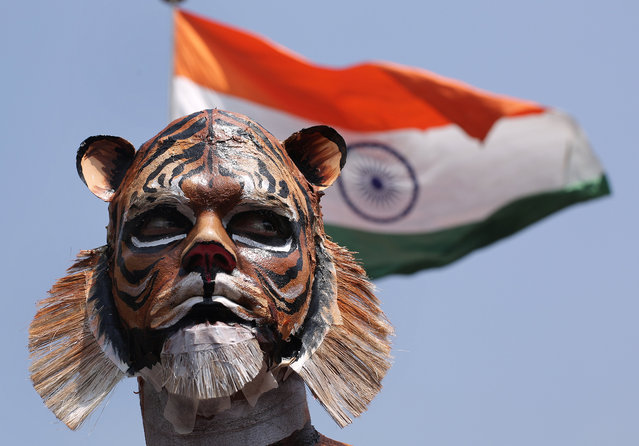 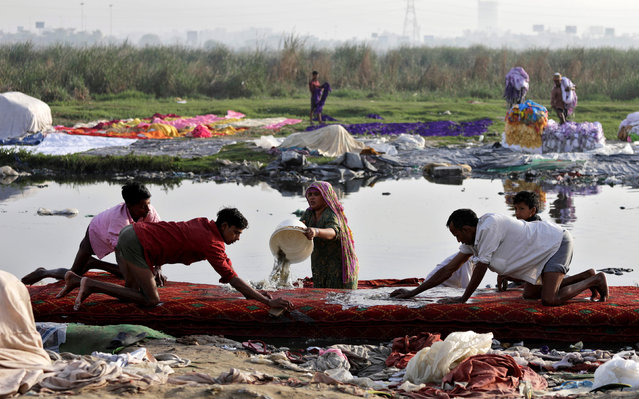 People wash clothes on the banks of the river Yamuna in New Delhi, India, March 15, 2018. (Photo by Saumya Khandelwal/Reuters) 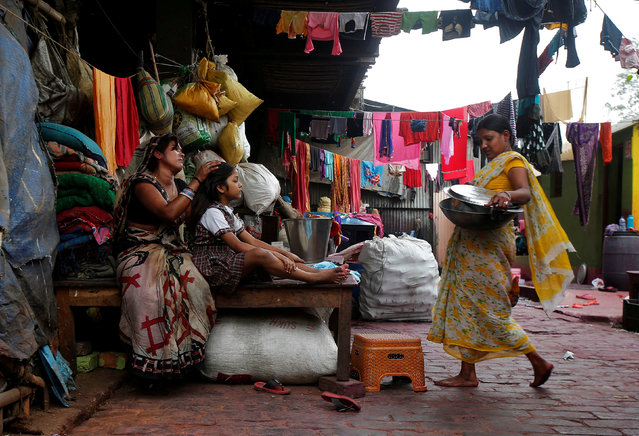 A woman gets her daughter dressed up for school at a slum in Kolkata, March 16, 2018. (Photo by Rupak De Chowdhuri/Reuters) 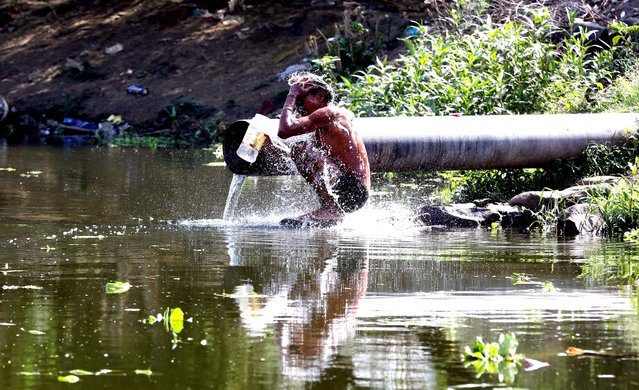 An Indian man takes bath from a water outlet on the eve of the World Water Day in Bhopal, India, 21 March 2018. World Water Day is held annually on 22 March as a means of focusing attention on the importance of freshwater and advocating for the sustainable management of freshwater resources. The theme for World Water Day 2018 is “Nature for Water”, exploring nature-based solutions to the water challenges we face in the 21st century. (Photo by Sanjeev Gupta/EPA/EFE/Rex Features/Shutterstock) 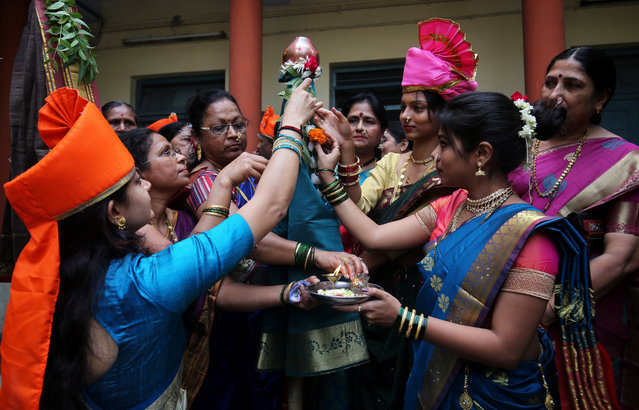 People perform a ritual as part of celebrations to mark the Gudi Padwa festival, the beginning of the Maharashtrian New Year, in Ahmedabad, March 18, 2018. (Photo by Amit Dave/Reuters) 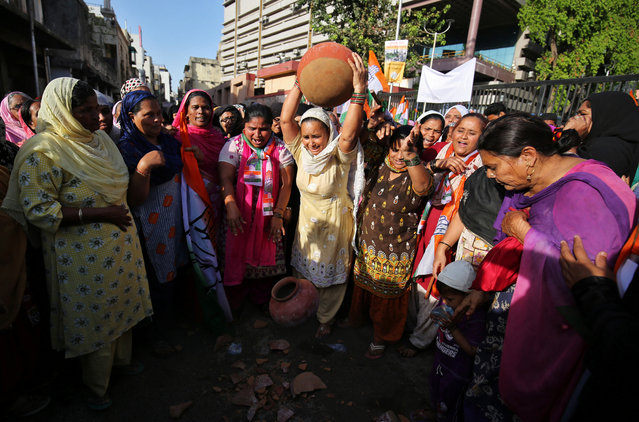 Residents throw earthen pitchers on the ground in protest against the shortage of drinking water, outside the municipal corporation office in Ahmedabad, March 15, 2018. (Photo by Amit Dave/Reuters) 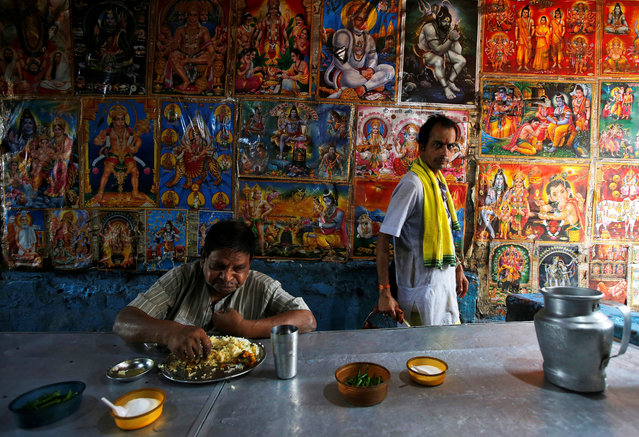 A man eats at a roadside stall as a Hindu priest walks past a wall with posters of Hindu deities at a market area in Kolkata, March 13, 2018. (Photo by Rupak De Chowdhuri/Reuters) 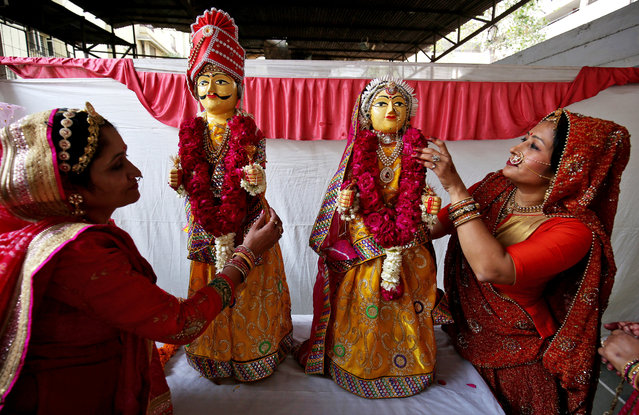 Women adorn wooden idols of a bride and a groom during Gangaur festival, during which unmarried women observe a fast for a desirable husband, while married women do so for the welfare, health and longevity of their husbands, in Ahmedabad, March 14, 2018. (Photo by Amit Dave/Reuters) 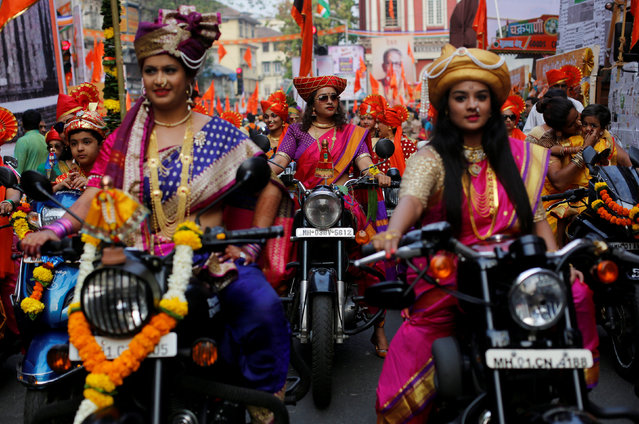 Women dressed in traditional costumes ride motorbikes as they attend celebrations to mark the Gudi Padwa festival, the beginning of the New Year for Maharashtrians, in Mumbai, India March 18, 2018. (Photo by Danish Siddiqui/Reuters) 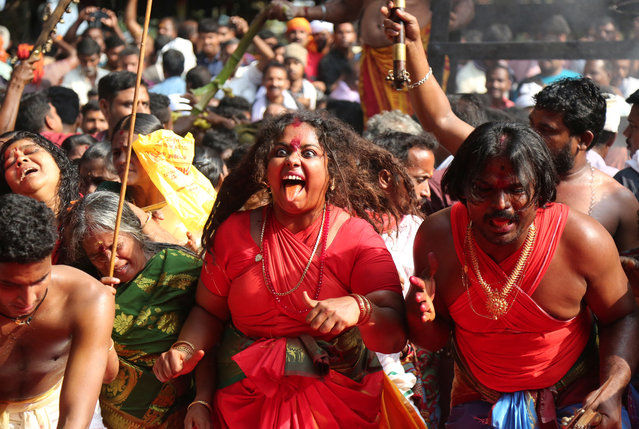 A Hindu woman reacts as she prays during the annual Kodungalloor Bharani festival which honours the Hindu Goddess Bhadrakali at a temple in Kodungalloor town, in the southern state of Kerala, India, March 20, 2018. (Photo by Sivaram V/Reuters) 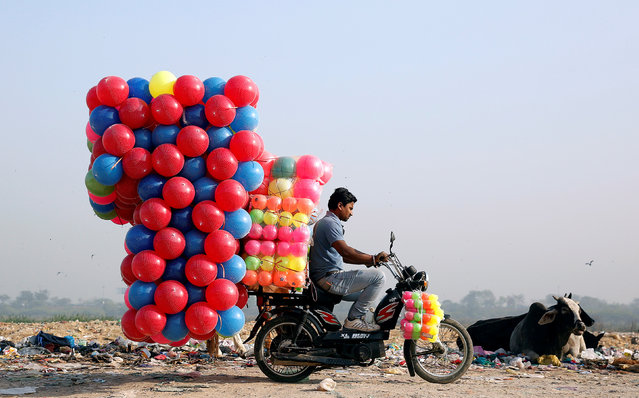 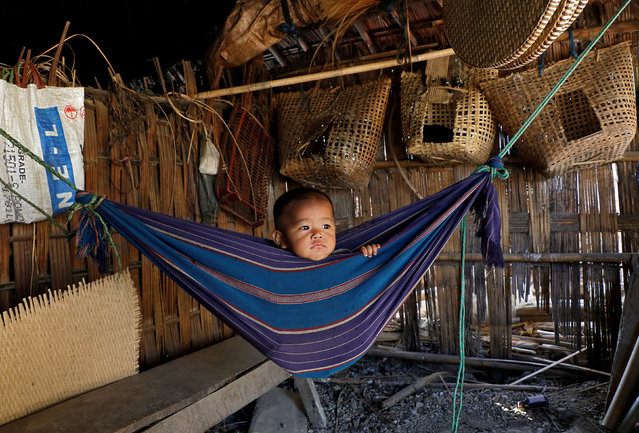 Tina Chakma, a six-month-old baby girl plays in an improvised hammock inside her parents' house on the outskirts of Agartala, India, March 20, 2018. (Photo by Jayanta Dey/Reuters) 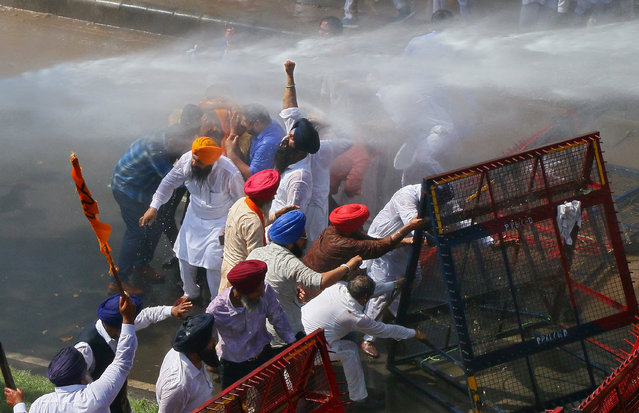 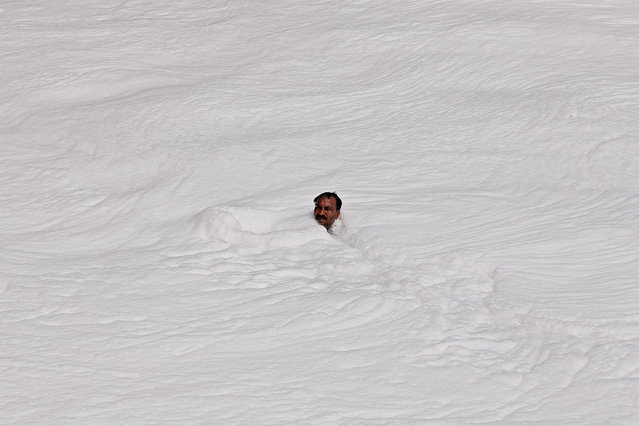 A man swims as he collects recyclable items in the polluted water of the river Yamuna ahead of World Water Day, in New Delhi, India on March 21, 2018. (Photo by Adnan Abidi/Reuters) 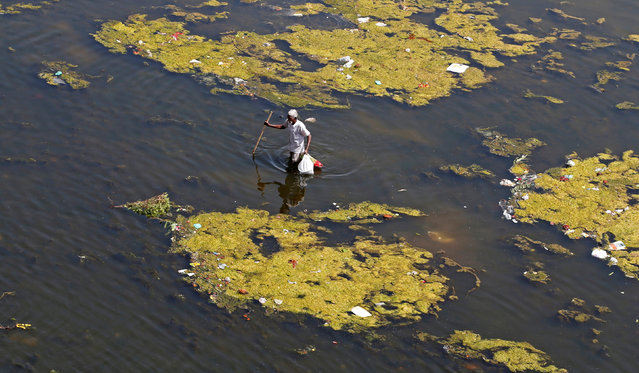 A man looks for recyclable items in the polluted waters of the Sabarmati river, ahead of World Water Day, in Ahmedabad, India, March 21, 2018. (Photo by Amit Dave/Reuters) 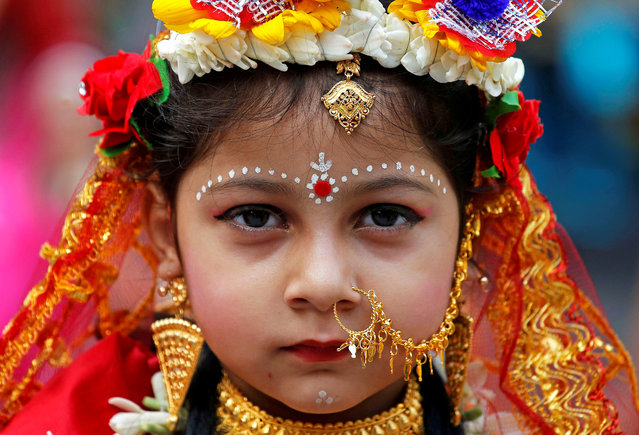 A Hindu girl dressed as a Kumari, poses for a picture as she arrives to attend the rituals to celebrate the Navratri festival at Adyapeath temple on the outskirts of Kolkata, March 25, 2018. (Photo by Rupak De Chowdhuri/Reuters) 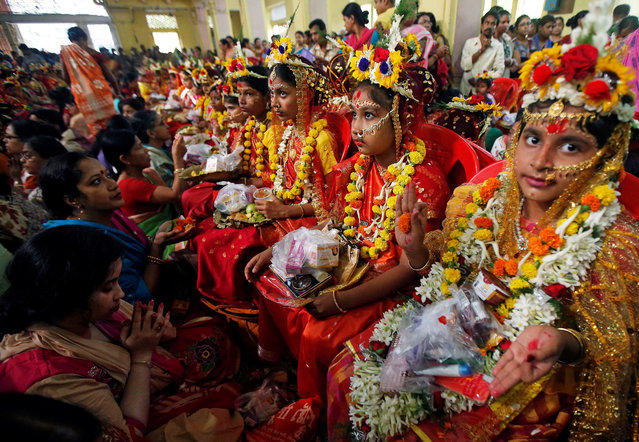 Hindu devotees worship young girls dressed as Kumari during rituals to celebrate the Navratri Festival, inside the Adyapeath Temple, on the outskirts of Kolkata, March 25, 2018. (Photo by Rupak De Chowdhuri/Reuters) 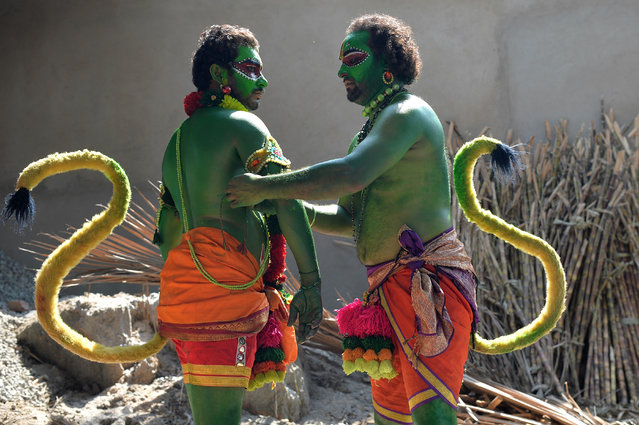 Indian artists dress up as the Hindu deity “Hanuman” – the monkey God in Hindu mythology – to mark the Rama Navami festival in Bangalore on March 25, 2018. Rama Navami is a spring Hindu festival that celebrates the birthday of the deity Rama. He is particularly important to the Vaishnavism tradition of Hinduism, as the seventh avatar of Vishnu. (Photo by Manjunath Kiran/AFP Photo)
Edit Del
27 Mar 2018 00:03:00, post received 0 comments
Publication archive:
←   →
Popular tags:
All tags
Last searches: