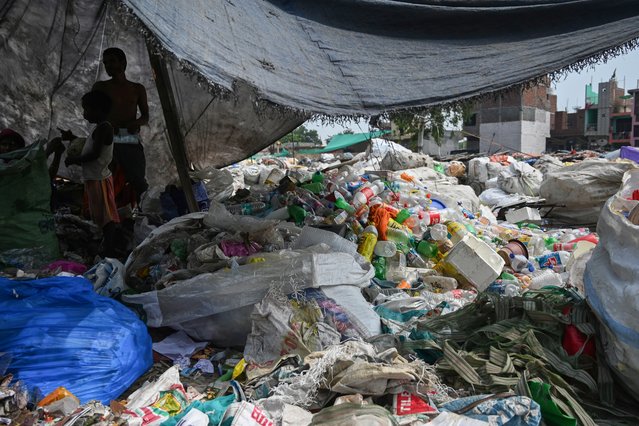 People stand next to piles of separated plastic waste in New Delhi on September 9, 2019. (Photo by Money Sharma/AFP Photo) An elderly man sleeps on a cot next to a street outside his home in New Delhi, India on September 17, 2019. (Photo by Jewel Samad/AFP Photo) 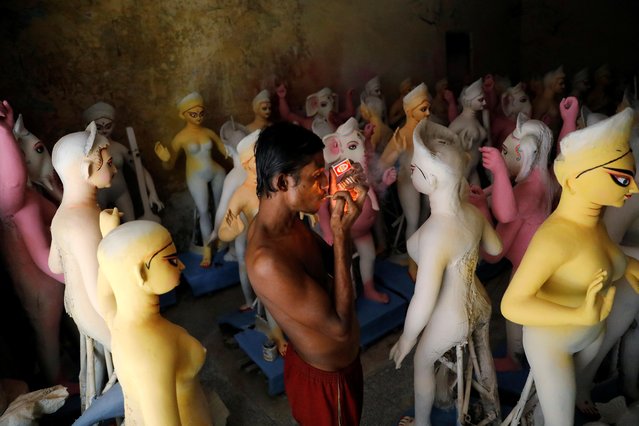 A worker lights a bidi, a local cigarette hand-rolled with tobacco leaf, at an idol making workshop ahead of the upcoming Hindu festival of Durga Puja in New Delhi, India, September 24, 2019. (Photo by Anushree Fadnavis/Reuters) 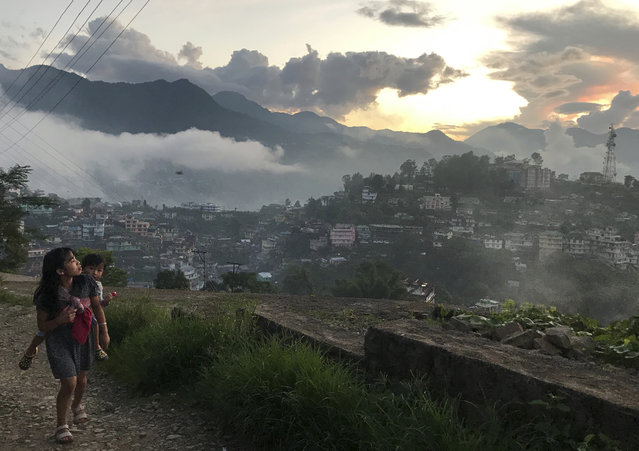 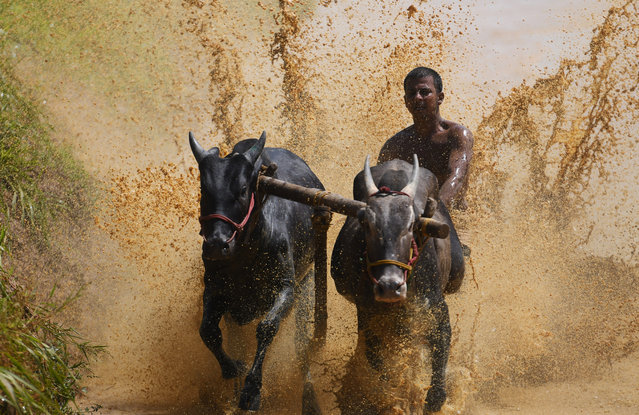 A jockey races a pair of bulls on a paddy fields during the annual Kalapoottu bull running festival on the ocassion of Onam festival celebrations in the village of Vengannur near Palakkad on September 12, 2019. (Photo by Arun Sankar/AFP Photo) 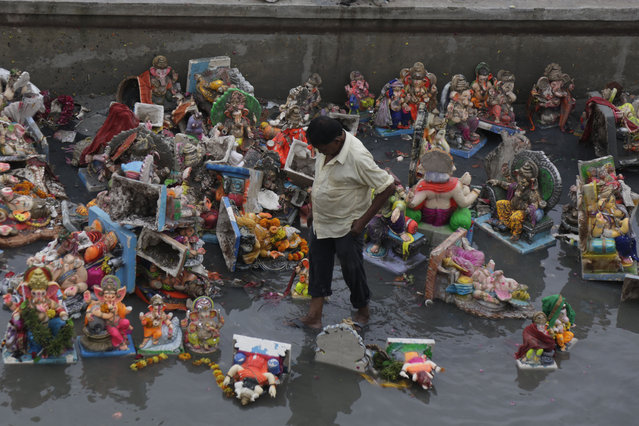 An Indian man forages for reusable items amid idols of Hindu elephant headed god Ganesha and offerings, a day after the immersion of idols, in Ahmadabad, India, Friday, September 13, 2019. Every year millions of devout Hindus immerse Ganesha idols into oceans and rivers during the ten-day long Ganesh Chaturthi festival that celebrates the birth of the Hindu god. (Photo by Ajit Solanki/AP Photo) 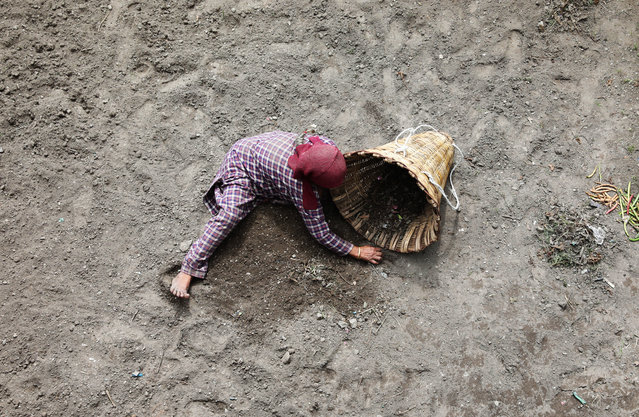 A Himachli woman works in a field at the Barot village near Dharamsala, India, 16 September 2019. Barot village originally developed in 1920 still has some old houses and it is fast developing as a tourist destination. (Photo by Harish Tyagi/EPA/EFE) 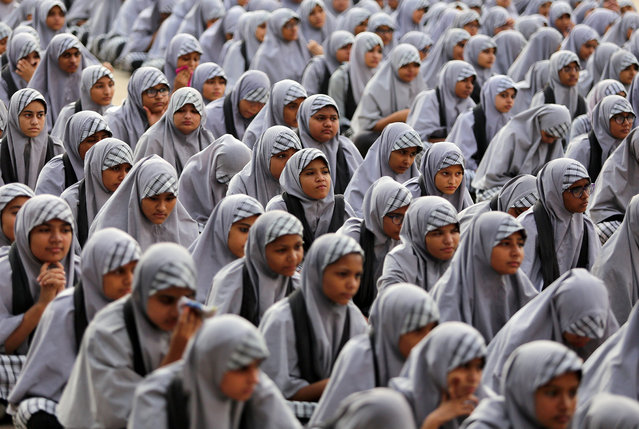 School girls listen to their teacher (not pictured) during a lecture on the Article 370, a special constitutional status for Kashmir which was scrapped by the Indian government last month, to mark Prime Minister Narendra Modi's birthday at a school in Ahmedabad, India, September 17, 2019. (Photo by Amit Dave/Reuters) 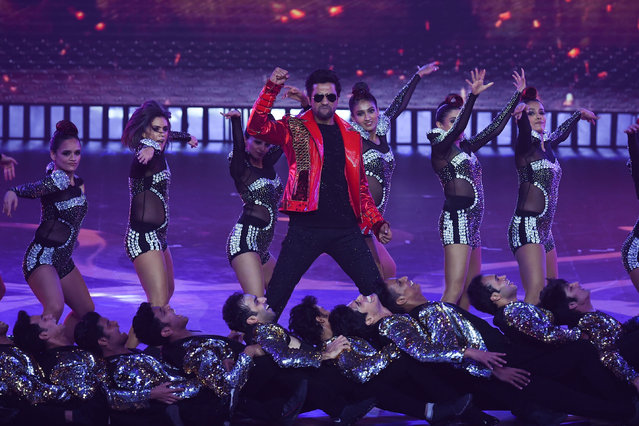 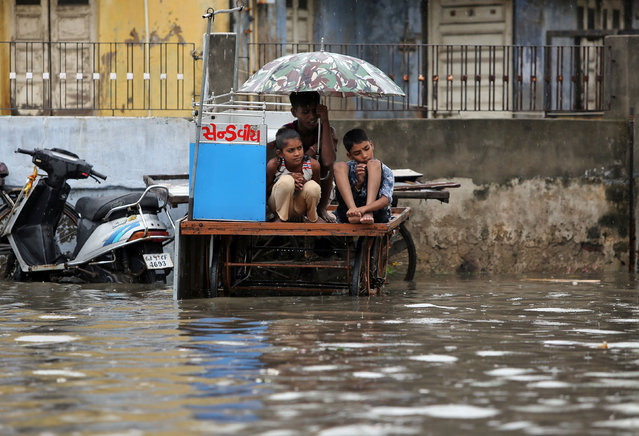 Children sit on a cart as they take shelter from rain on a waterlogged road in Ahmedabad, India, September 10, 2019. (Photo by Amit Dave/Reuters) 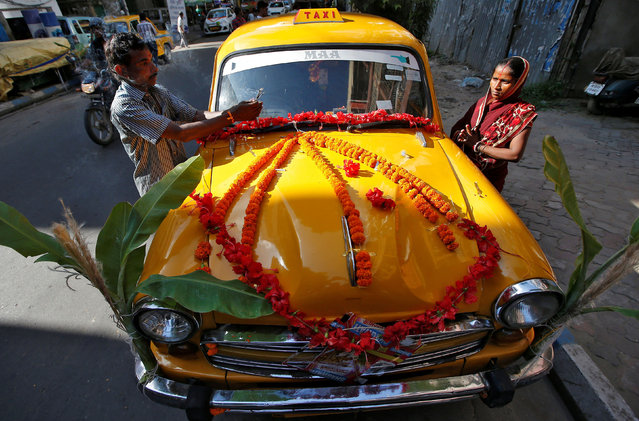 A taxi driver and his wife offer prayers in front of their taxi during the Vishwakarma Puja, or the festival of the Hindu deity of architecture and machinery, in Kolkata, India, September 18, 2019. (Photo by Rupak De Chowdhuri/Reuters) 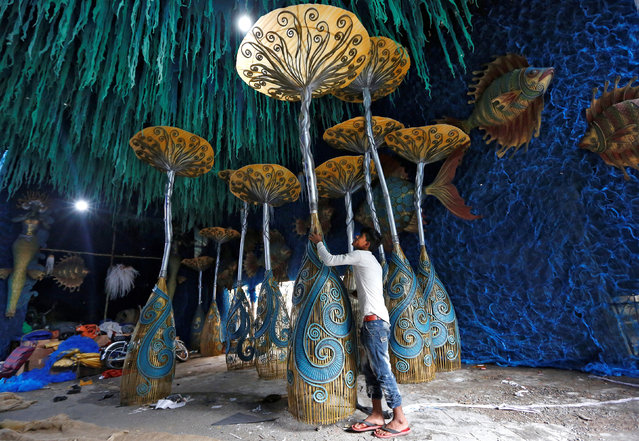 A worker decorates a pandal or a temporary platform for the upcoming Hindu festival of Durga Puja in Kolkata, India, September 24, 2019. (Photo by Rupak De Chowdhuri/Reuters) 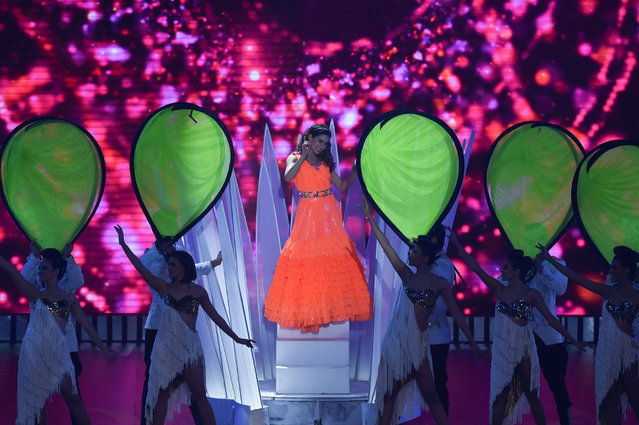 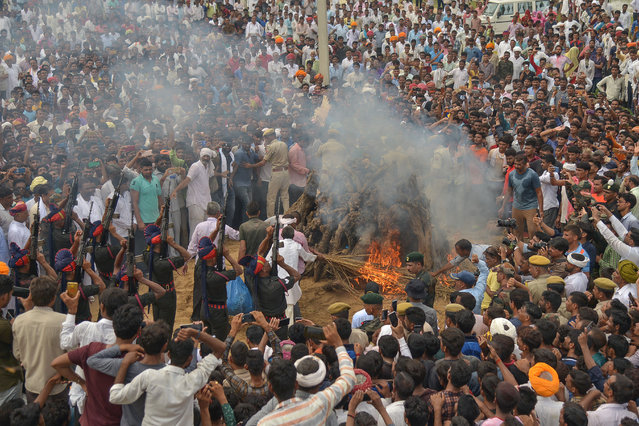 Mourners at the funeral of an Indian soldier who was killed after Pakistani troops opened fire along the line of control in the Poonch sector of Jammu and Kashmir state in Rajasthan, India on September 3, 2019. (Photo by Shaukat Ahmed/Pacific Press via Zuma Wire/Rex Features/Shutterstock) 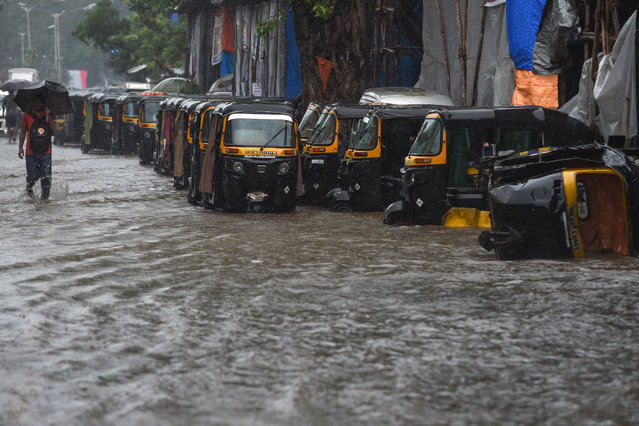 A pedestrian wades through a waterlogged street next to a line of auto rickshaws in heavy rain in Mumbai on September 4, 2019. (Photo by Punit Paranjpe/AFP Photo) 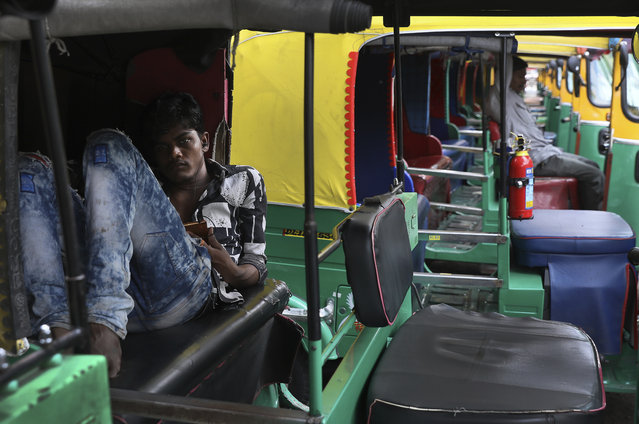 An auto-rickshaw driver rests during a public transport strike in New Delhi, India, Thursday, September 19, 2019. Commuters in the Indian capital are facing problems as a large section of the public transport, including private buses, auto-rickshaws and a section of app-based cabs Thursday remained off the roads in protest against a sharp increase in traffic fines imposed by the government under a new law. (Photo by Manish Swarup/AP Photo) 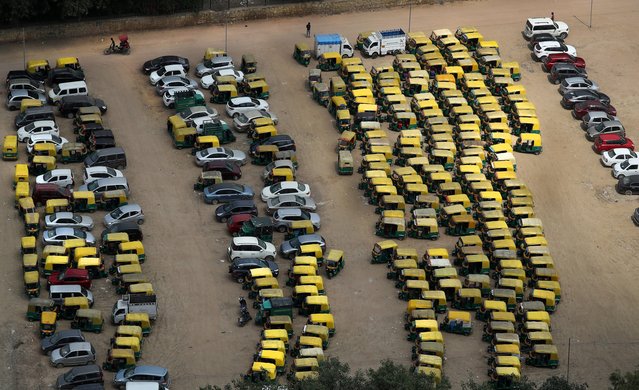 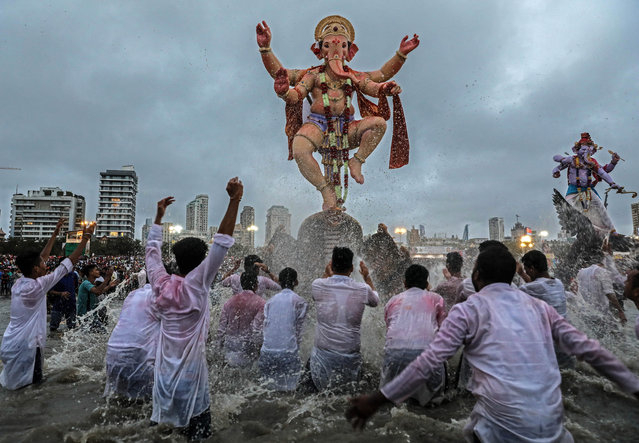 Indian devotees carry idols of elephant-headed Hindu god Lord Ganesha for immersion into the Arabian Sea, as part of a ritual of the Ganpati festival in Mumbai, India, 12 September 2019. The Ganesh festival comes to an end on the day of Anant Chaturdashi. During the Ganpati festival, that is celebrated as the birthday of Lord Ganesha, idols of the Hindu deity are worshipped at hundreds of pandals or makeshift tents before they are immersed into water. (Photo by Divyakant Solanki/EPA/EFE) 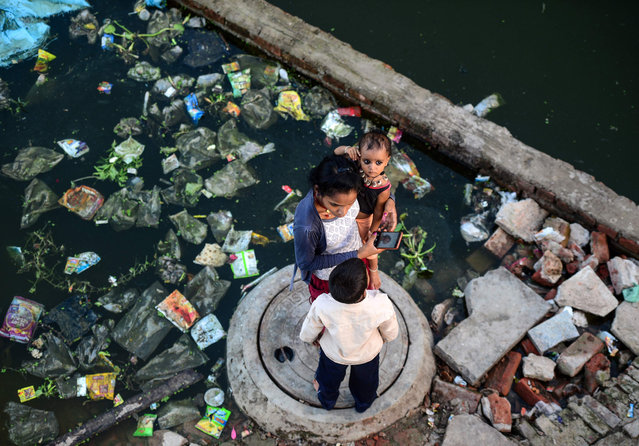 Residents stand outside their flooded residence in the Ganga Nagar area of Allahabad as the water level of the Ganges and Yamuna rivers rise on September 15, 2019. (Photo by Sanjay Kanojia/AFP Photo) 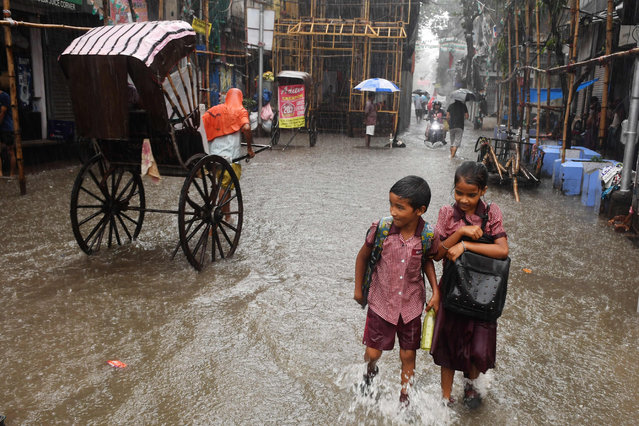