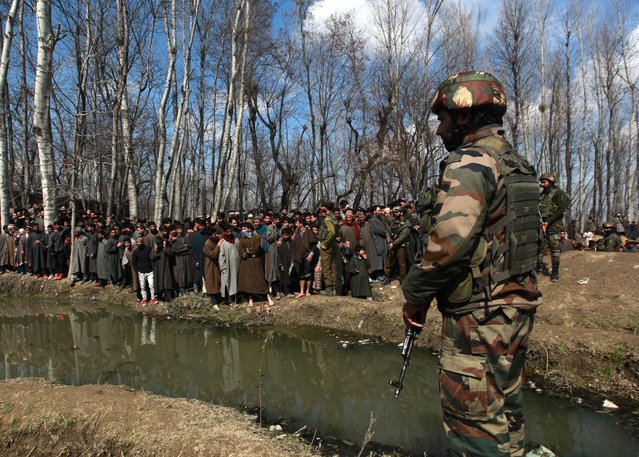 An Indian soldier stands guard as people look at the wreckage (unseen) of Indian Air Force's helicopter after it crashed in Budgam district in Kashmir February 27, 2019. (Photo by Danish Ismail/Reuters) 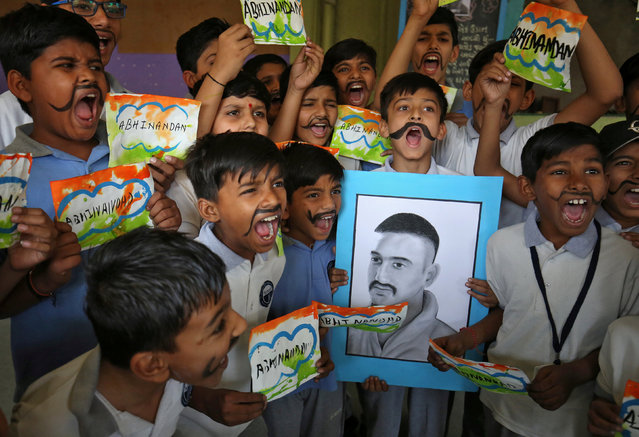 School children react as they celebrate the release of Indian Air Force pilot Wing Commander Abhinandan Varthaman by Pakistan on Friday, during a ceremony inside a school in Ahmedabad, India, March 2, 2019. (Photo by Amit Dave/Reuters) 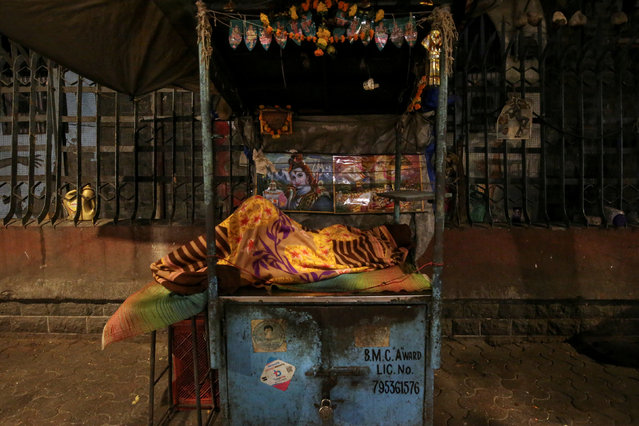 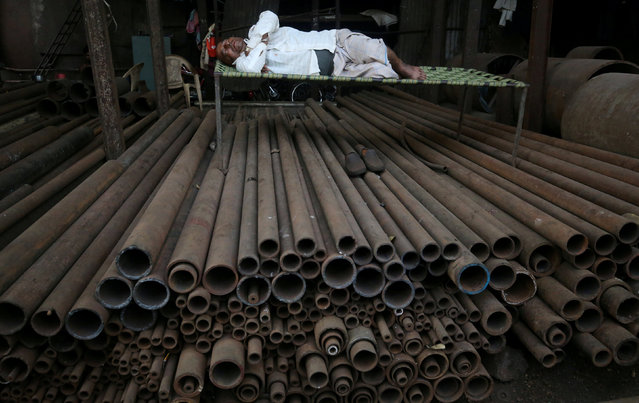 A man sleeps on a bed amidst metal rods in Mumbai, India March 7, 2019. (Photo by Francis Mascarenhas/Reuters) 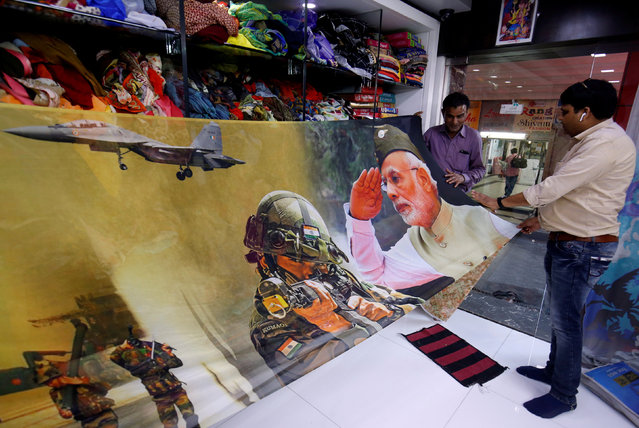 Traders display a sari, a traditional clothing worn by women, with printed images of India's Prime Minister and Indian Army inside their shop in Surat, India, March 8, 2019. (Photo by Amit Dave/Reuters) 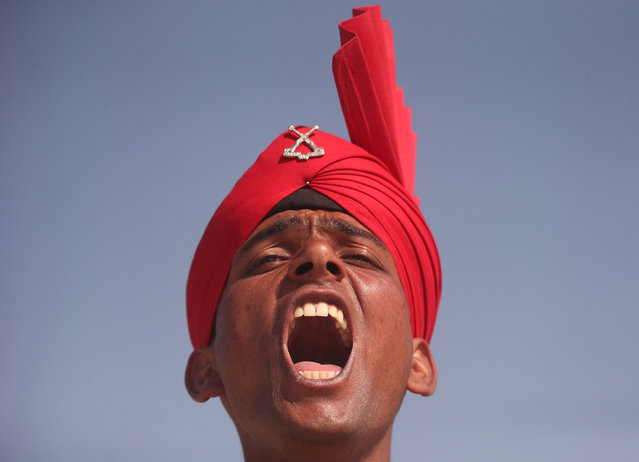 An Indian army recruit wearing his ceremonial headgear shouts a command during his passing-out parade in Rangreth on the outskirts of Srinagar March 9, 2019. (Photo by Danish Ismail/Reuters) 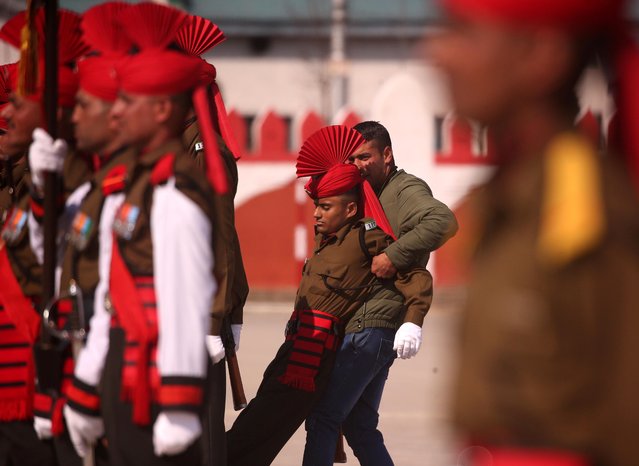 An Indian army recruit wearing his ceremonial uniform is helped after he fainted during his passing-out parade in Rangreth on the outskirts of Srinagar March 9, 2019. (Photo by Danish Ismail/Reuters) 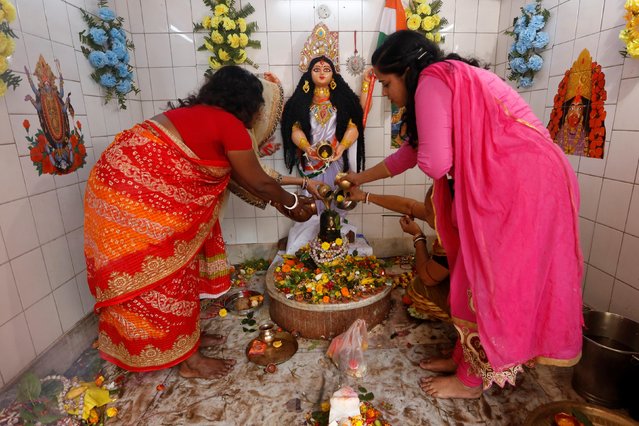 Hindu devotees pour holy water over a Shivling (a symbol of Lord Shiva) inside a temple during the Maha Shivratri festival in Kolkata, March 4, 2019. (Photo by Rupak De Chowdhuri/Reuters) 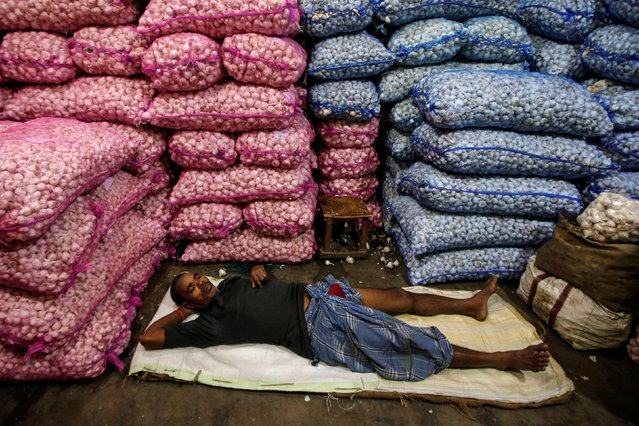 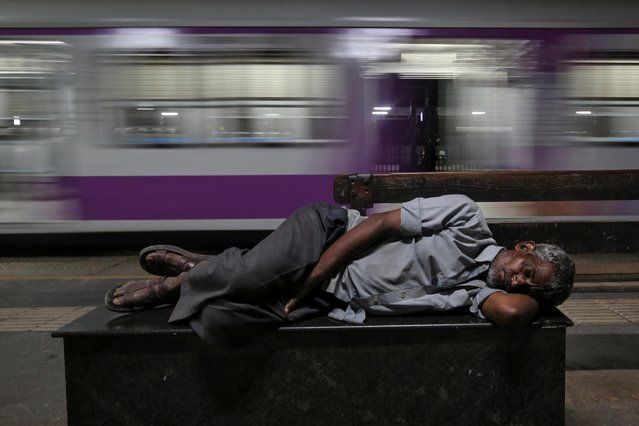 A man sleeps on a bench next to a passing train at a railway station in Mumbai, March 6, 2019. (Photo by Francis Mascarenhas/Reuters) 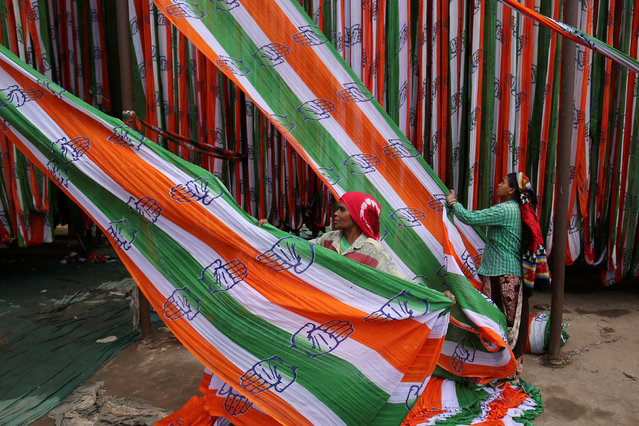 A worker pulls a roll of flags of India's main opposition Congress party kept for drying at a flag manufacturing factory, ahead of the 2019 general elections, in Ahmedabad, India, March 13, 2019. (Photo by Amit Dave/Reuters) 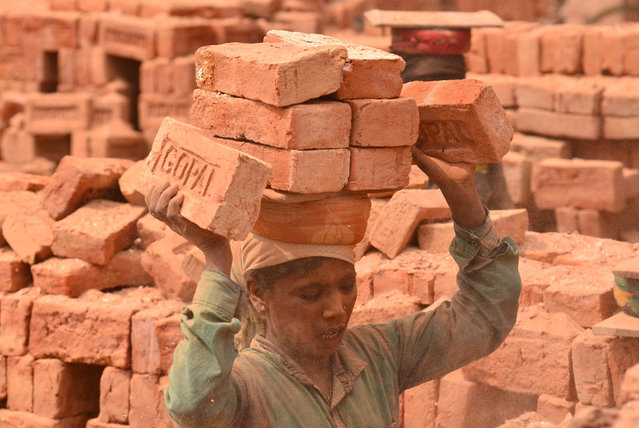 An Indian Women work at a Bricks Kiln on International Womens Day in Dimapur, India north eastern state of Nagaland on Friday, 08 March 2019. International Womens Day is observed every year on March 08 to celebrate the social, economic, cultural and political achievement of women with this year theme as Balance for Better. (Photo by Caisii Mao/NurPhoto via Getty Images) 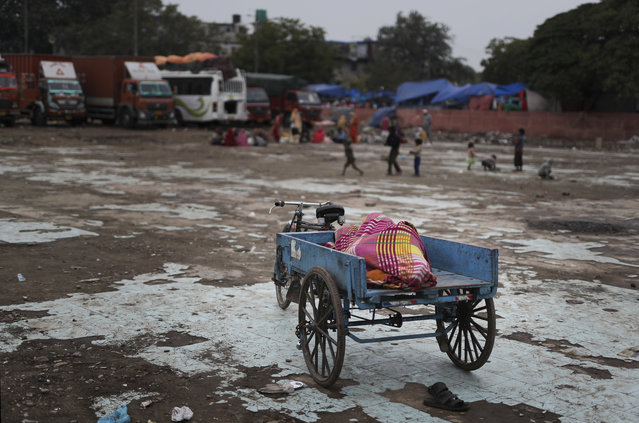 An Indian rickshaw cart puller sleeps in his cart in New Delhi, India, Wednesday, February 20, 2019. Millions of Indians live on less than $2 a day. (Photo by Altaf Qadri/AP Photo) 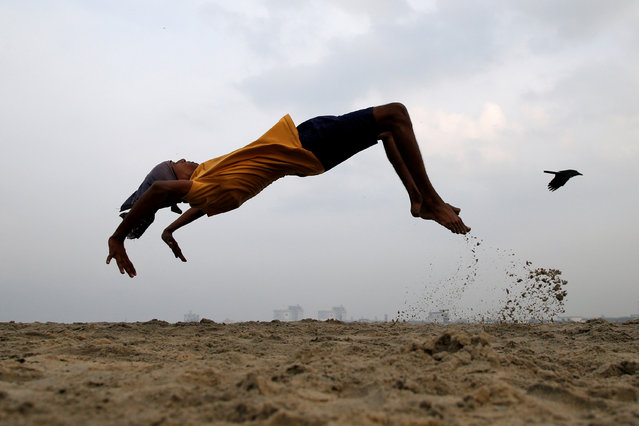 A boy practices somersaulting as he exercises at a beach in Kochi, India, March 11, 2019. (Photo by Sivaram V/Reuters) 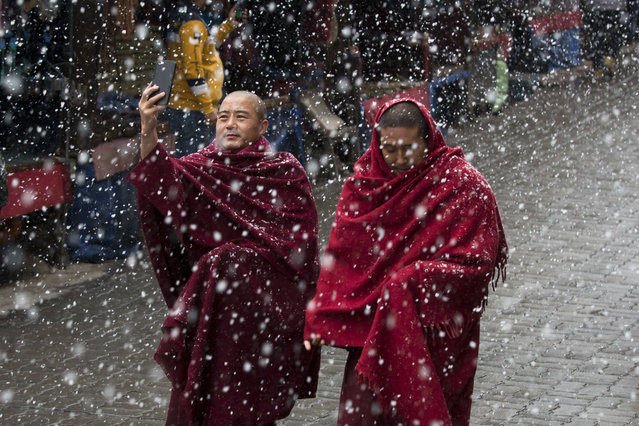 In this Wednesday, February 27, 2019, photo, an exile Tibetan Buddhist monk uses his phone camera as he walks with another in the snow in Dharmsala, India. This Himalayan region saw another snowfall on Wednesday. (Photo by Ashwini Bhatia/AP Photo) 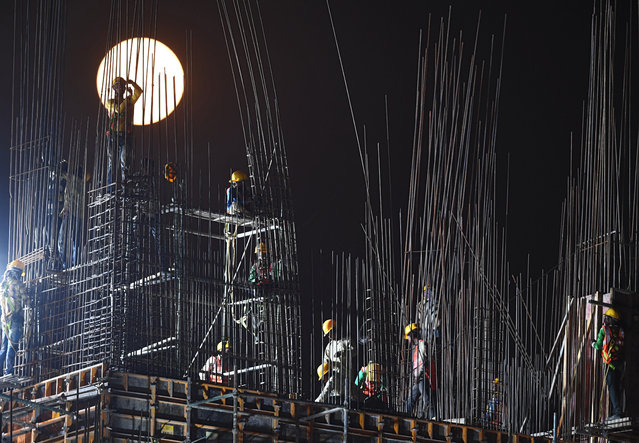 A “Super Snow Moon” rises as Indian construction labourers work at a building site in Kolkata on February 19, 2019. Super Moon is a term used when a full moon is at or near its closest approach to Earth. (Photo by Dibyangshu Sarkar/AFP Photo) 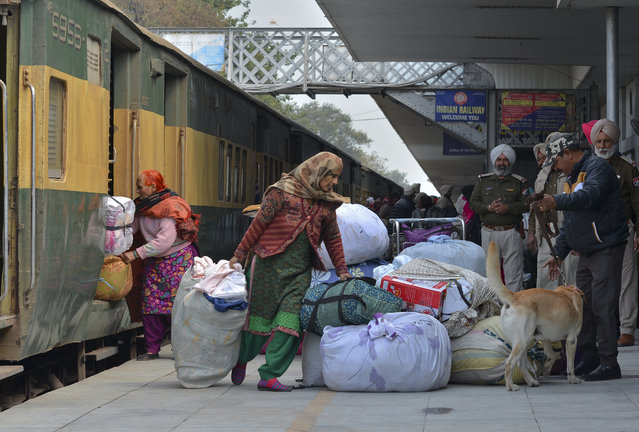 Passengers from Pakistan unload their belongings from the Samjhauta Express train as it arrives in Atari, India, Monday, March 4, 2019. A Pakistani railway official said the key train service with neighboring India has resumed in another sign of easing tensions between the two nuclear-armed rivals since a major escalation last week over disputed Kashmir region. (Photo by Prabhjot Gill/AP Photo) 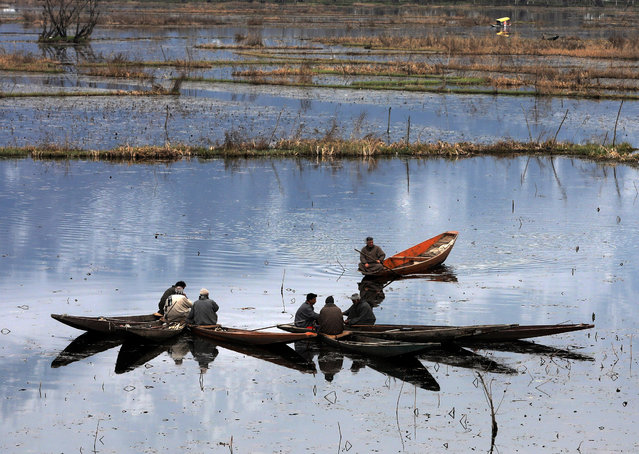 Kashmiri boatmen interact with each other as they take rest on their boats on the waters of Nageen Lake in Srinagar, the summer capital of Indian Kashmir, 04 March 2019. (Photo by Farooq Khan/EPA/EFE) 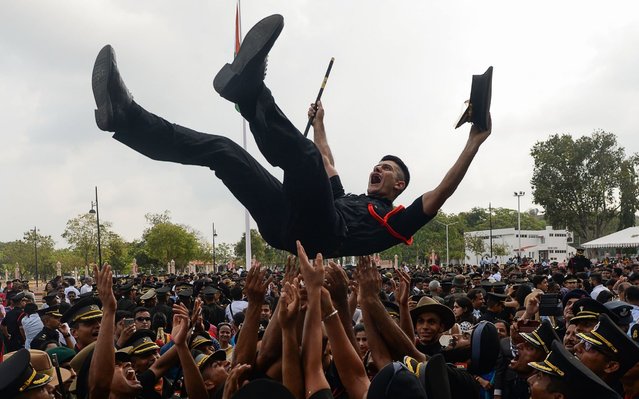 Indian army cadets celebrate after their graduation ceremony at the Officers Training Academy in Chennai on March 9, 2019. A total of 142 cadets including 30 women and 18 foreign cadets from Bhutan, Afghanistan and Fiji graduated from the academy and will be posted as lieutenants in the Indian Army. (Photo by Arun Sankar/AFP Photo) 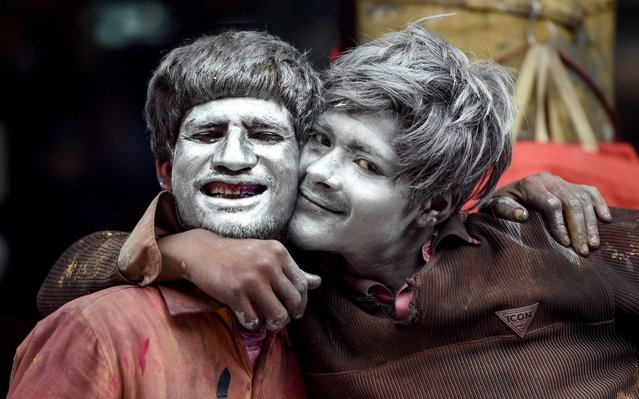 Indian coloured powder vendors pose for photographs as they coloured their face for the upcoming spring festival of Holi in New Delhi on March 13, 2019. Holi, also called the festival of colours, is a popular Hindu spring festival observed in India at the end of winter season. (Photo by Money Sharma/AFP Photo) 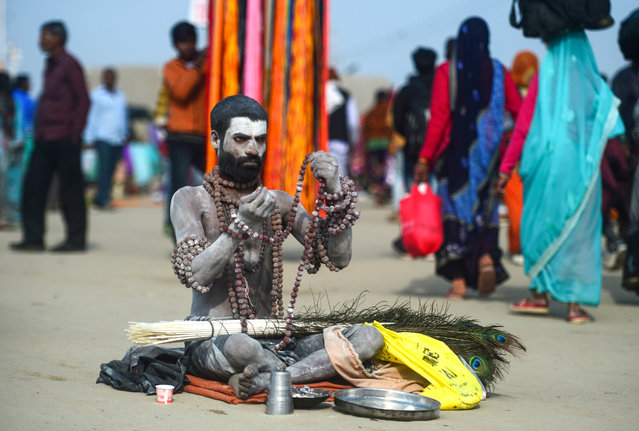 An Indian sadhu (Hindu holy man) sits on the banks of Sangam – the confluence of the Ganges, Yamuna and mythical Saraswati rivers – on the auspicious bathing day of 'Maghi Purnima' during the Kumbh Mela festival in Allahabad on February 19, 2019. Millions of Hindu pilgrims took the plunge in holy rivers on the most auspicious bathing days of the Kumbh Mela festival, led by naked, ash-smeared holy men and accompanied by chants from Hindu holy texts. (Photo by Sanjay Kanojia/AFP Photo)
Edit Del
16 Mar 2019 00:05:00, post received 0 comments
Publication archive:
←   →
Popular tags:
All tags
Last searches: