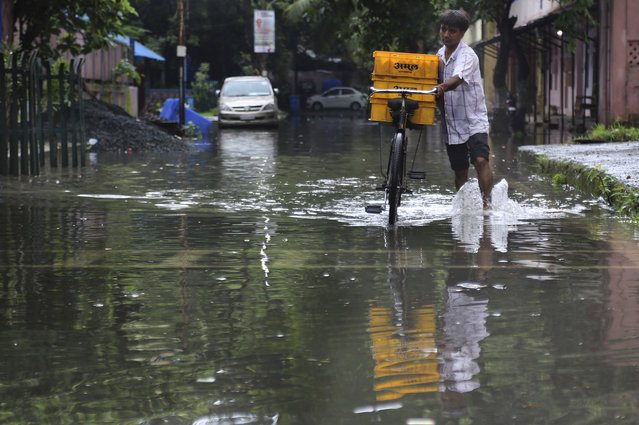 A man pushes his bicycle, carrying milk for sale, past a waterlogged street after rainfall in Mumbai, India, Wednesday, July 24, 2019. India's monsoon season runs from June to September. (Photo by Rafiq Maqbool/AP Photo) 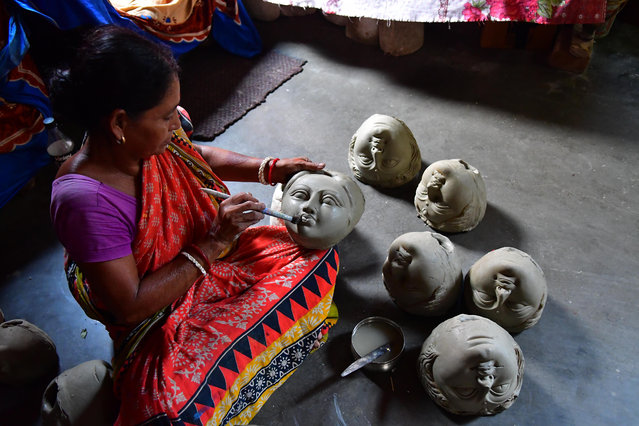 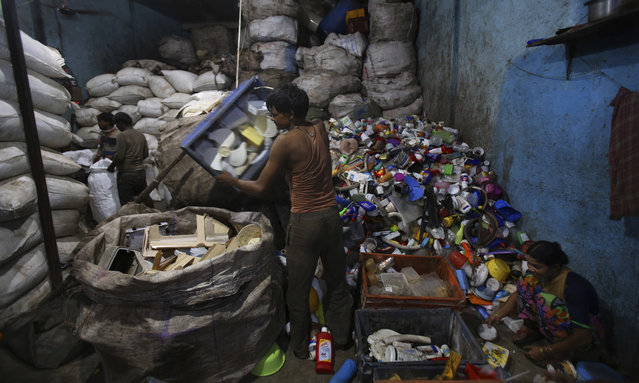 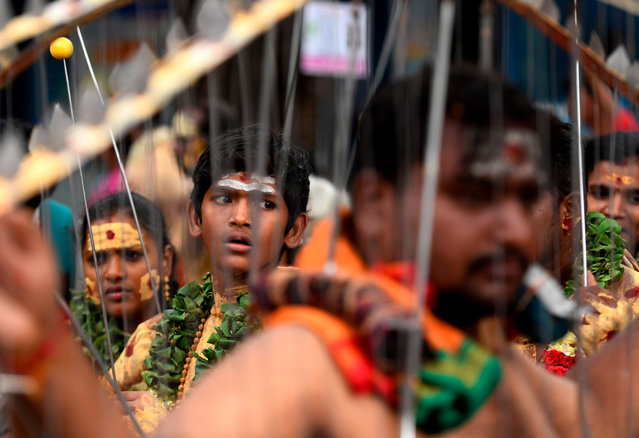 Tamil Hindu devotees with metal rods pierced in their bodies take part in rituals on the occasion of “Aadi” festival in Chennai on July 28, 2019. “Aadi” is considered a holy month by Tamils and is celebrated with rituals worshipping Hindu gods. (Photo by Arun Sankar/AFP Photo) 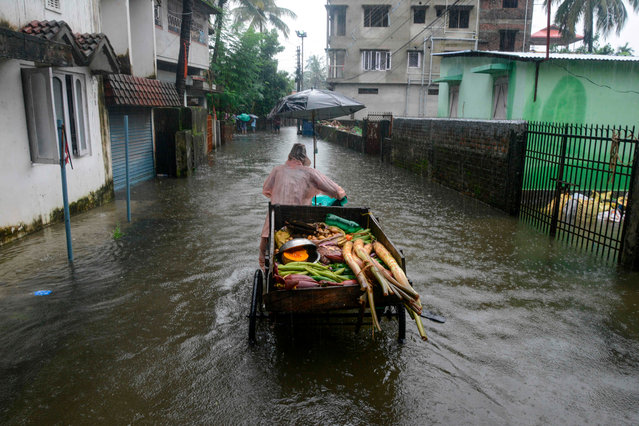 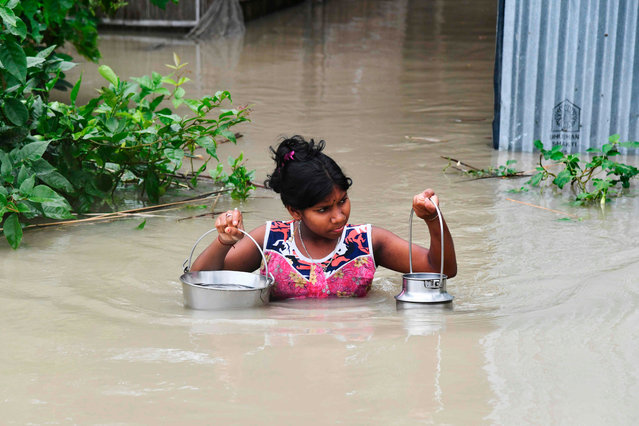 An Indian girl carries drinking water as she wades through flood waters at Pabhokathi village in Morigaon district of India's Assam state on July 15, 2019. Floods and landslides caused by the annual deluge have wreaked deadly havoc from the Himalayan foothills to low-lying camps housing Rohingya refugees, with officials warning tolls could rise as they scramble to reach affected communities. (Photo by Biju Boro/AFP Photo) 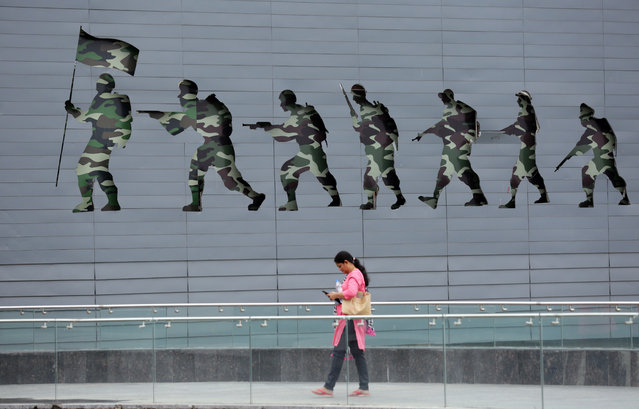 A visitor looks at her phone as she walks after an event to pay tributes to the Kargil war martyrs at the Punjab State War Heroes' Memorial and Museum on the occasion of “Kargil Vijay Divas” or “Kargil Victory Day” in Amritsar, India, 26 July 2019. According to reports, more than 500 Indian soldiers were killed in the Kargil war between India and Pakistan that lasted for two months in 1999. (Photo by Raminder Pal Singh/EPA/EFE) 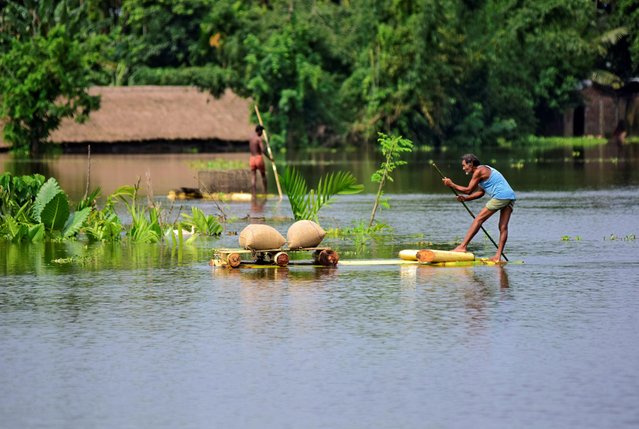 A man uses a makeshift raft to move his paddy to a safer place in a flooded area in Morigaon district in the northeastern state of Assam, India, July 16, 2019. (Photo by Anuwar Hazarika/Reuters) 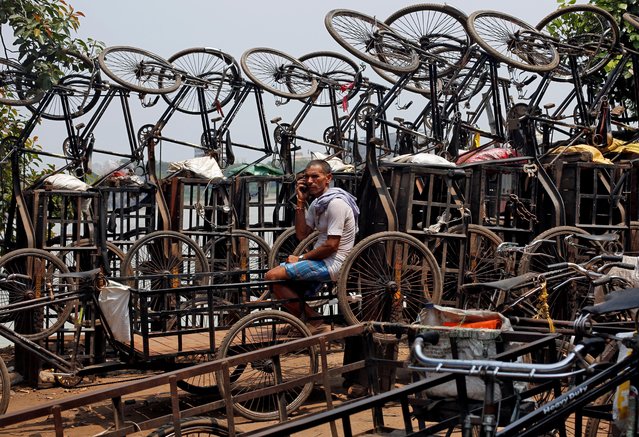 A man speaks on his mobile phone among parked trishaws in Kolkata, India, July 16, 2019. (Photo by Rupak De Chowdhuri/Reuters) 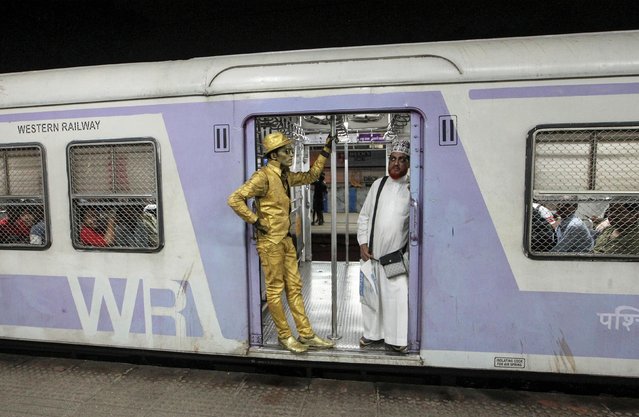 Girjesh Kumar Gaud, 22, an aspiring Bollywood actor who works as a performance artist, stands on the doorway of suburban train as he travels back home in Mumbai, India, July 16, 2019. (Photo by Prashant Waydande/Reuters) 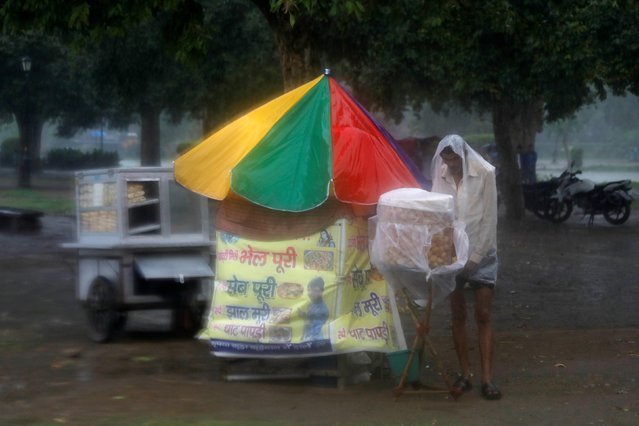 A vendor selling snacks covers himself with a plastic sheet as it rains in New Delhi, India, July 15, 2019. (Photo by Anushree Fadnavis/Reuters) 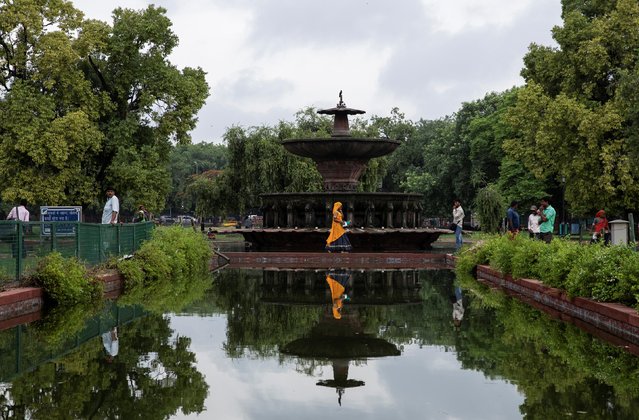 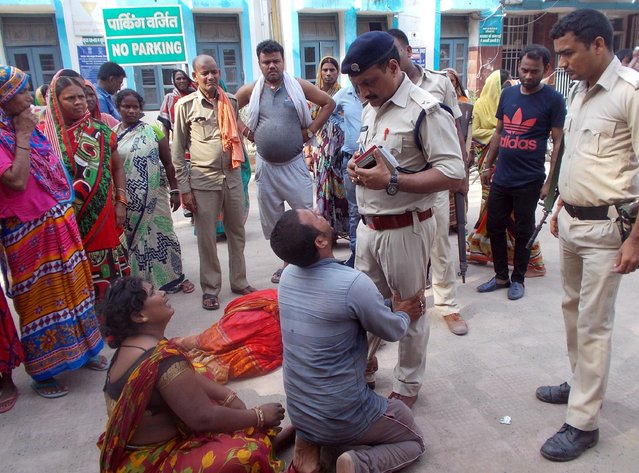 Relatives of the victims of a mob lynching incident speak to a police officer as they mourn outside a hospital in Chapra, Bihar, July 19, 2019. (Photo by Reuters/Stringer) 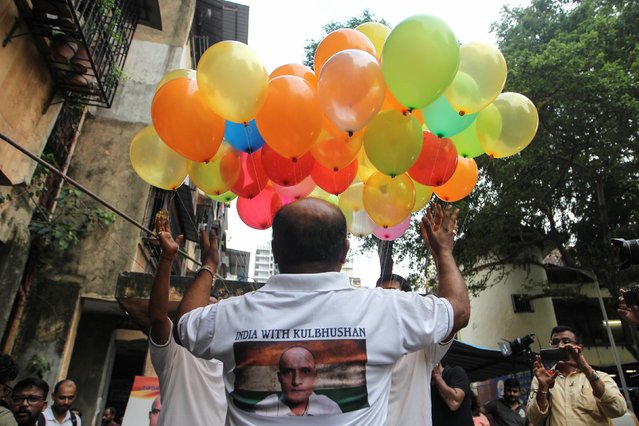 People celebrate after the issue of a verdict in the case of Indian national Kulbhushan Jadhav by International Court of Justice, in Mumbai, July 17, 2019. (Photo by Prashant Waydande/Reuters) 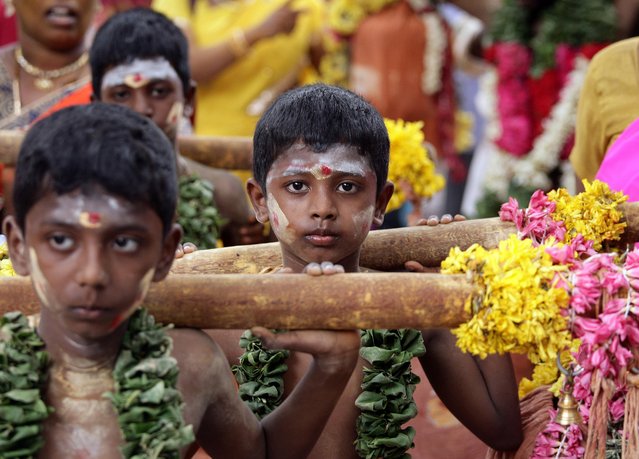 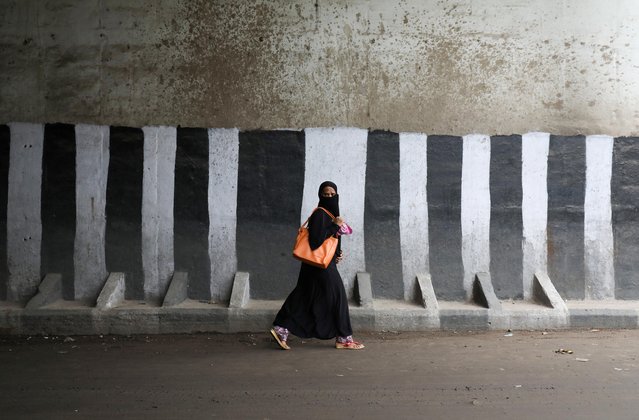 A veiled muslim woman walks across a road in the old quarters of Delhi, July 24, 2019. (Photo by Anushree Fadnavis/Reuters) 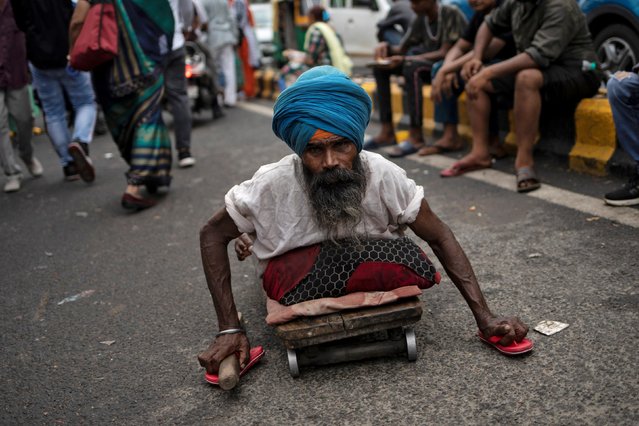 A disabled Sikh man asks for alms outside a Gurudwara or a Sikh temple, during celebrations for the birth anniversary of Guru Har Krishan, the eight Guru of the Sikhs, in New Delhi, July 26, 2019. (Photo by Danish Siddiqui/Reuters) 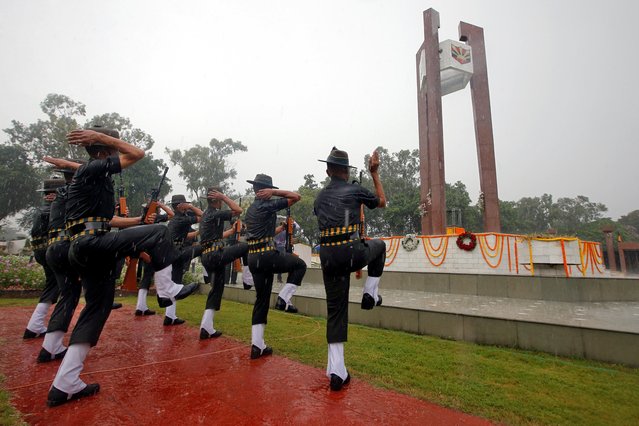 Indian army soldiers perform during a wreath laying ceremony at a war memorial to mark the 20th anniversary of “Vijay Diwas” (or victory day), at a garrison in Kolkata, July 26, 2019. (Photo by Rupak De Chowdhuri/Reuters) 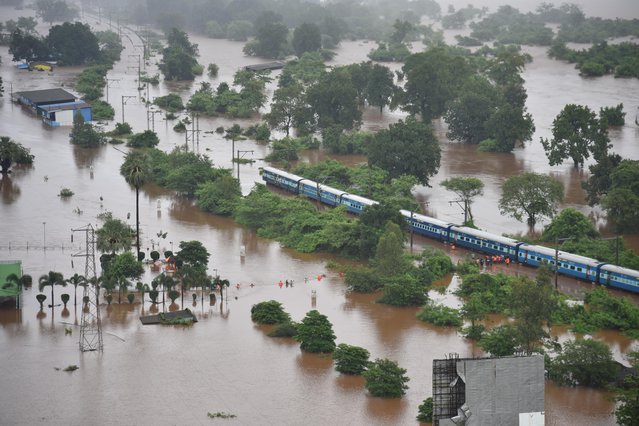 An aerial view shows a stranded passenger train in a flooded area near Badlapur, in the western state of Maharashtra, July 27, 2019. (Photo by Indian Navy/Handout via Reuters) 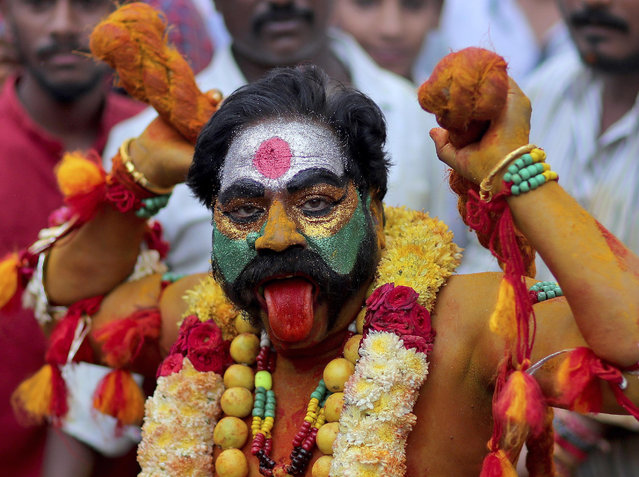