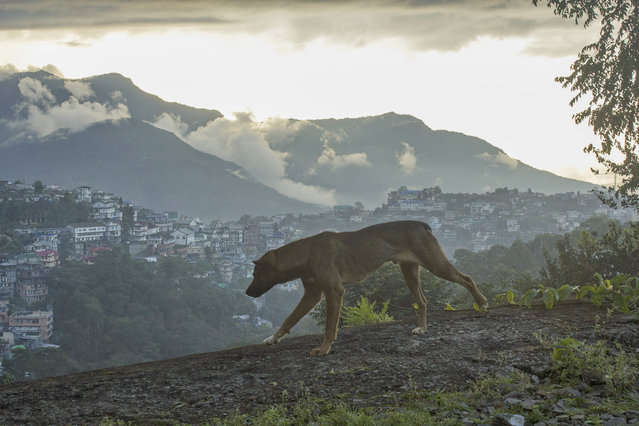 A dog stretches by the edge of a road in the backdrop of the hills of Kohima, capital of the northeastern Indian state of Nagaland, Friday, September 27, 2019. Kohima is a historic mountain town, home to the indigenous Nagas, that was the site of a bloody battle in World War II. (Photo by Yirmiyan Arthur/AP Photo) Siddharth's mother Jyoti Dhage holds her four month old daughter Akansha as she watches her neighbour Gaurav Ganesh, 13, as he helps fill the containers with water at Aurangabad railway station, India, July 18, 2019. “I'm careful, but sometimes pitchers fall off the door in the melee and our work is wasted”, she said. “I can't leave my daughter at home alone so I have to take her along”. (Photo by Francis Mascarenhas/Reuters) 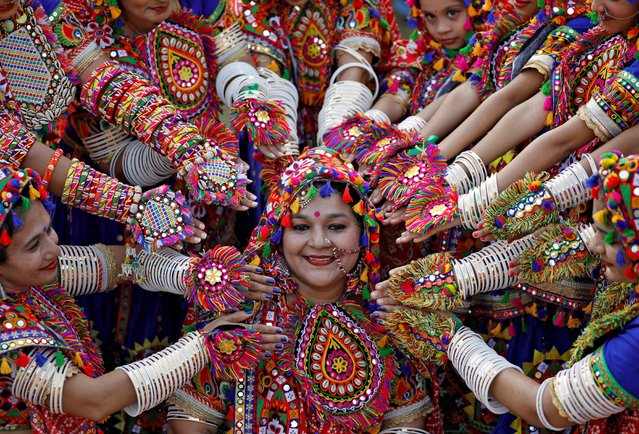 Participants dressed in traditional attire pose for pictures during rehearsals for Garba, a folk dance, in preparations for the upcoming Navratri, a festival during which devotees worship the Hindu goddess Durga, in Ahmedabad, India, September 25, 2019. (Photo by Amit Dave/Reuters) 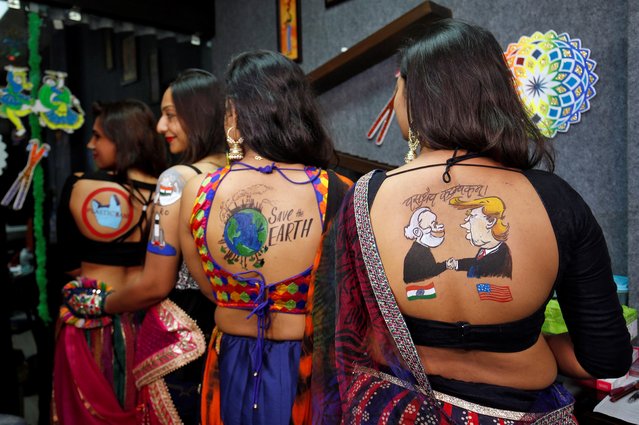 Women pose after they got body paint tattoos sketched on their backs in preparations for the upcoming Navratri, a festival when devotees worship the Hindu goddess Durga in Ahmedabad, India, September 24, 2019. (Photo by Amit Dave/Reuters) 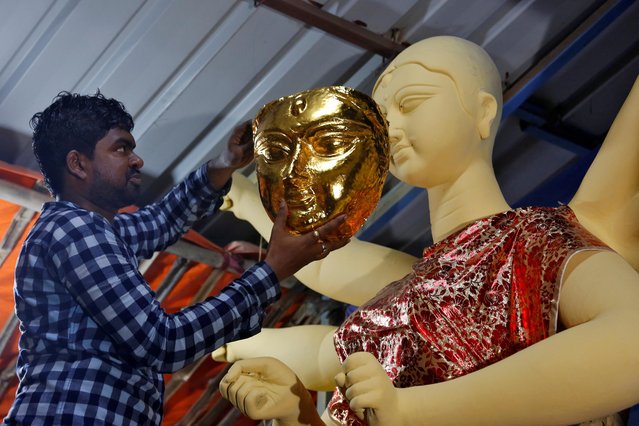 An artisan tries a gold face on an idol of the Hindu goddess Durga during a media preview inside a workshop during preparations for the upcoming Durga Puja festival in Kolkata, India, September 26, 2019. (Photo by Rupak De Chowdhuri/Reuters) 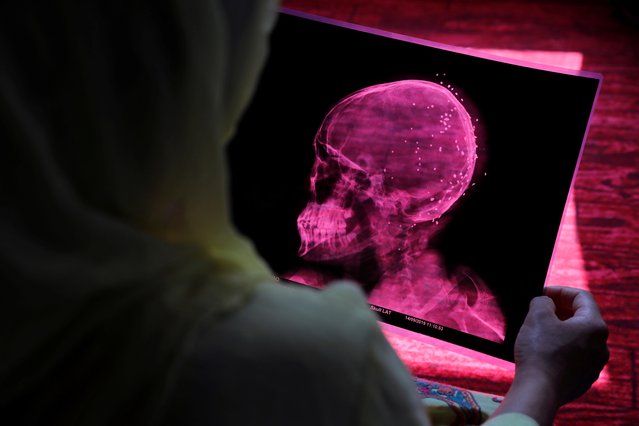 Rubina, mother of Irshad, a 15-year-old Kashmiri boy who was injured by pellets fired by Indian security forces during protests in Anchar neighbourhood, shows his x-ray, during restrictions following the scrapping of the special constitutional status for Kashmir by the Indian government, in Srinagar, September 20, 2019. “If he has to go out for a change of bandage to the nearby government hospital, he will be accompanied by six or seven women, so they don't snatch him away”, Rubina said. (Photo by Danish Siddiqui/Reuters) 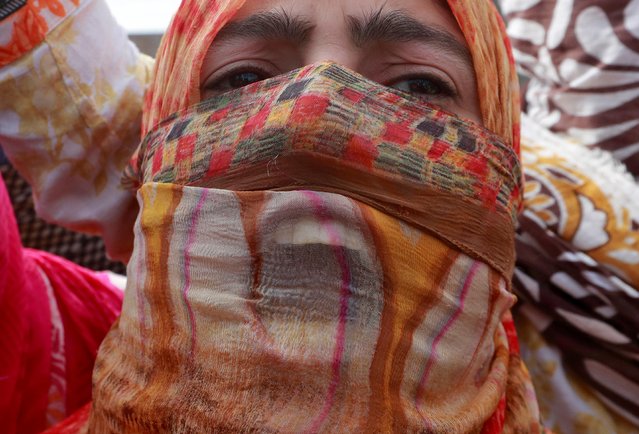 A Kashmiri woman shouts slogans at a protest site after Friday prayers during restrictions following scrapping of the special constitutional status for Kashmir by the Indian government, in Srinagar, September 27, 2019. (Photo by Danish Ismail/Reuters) 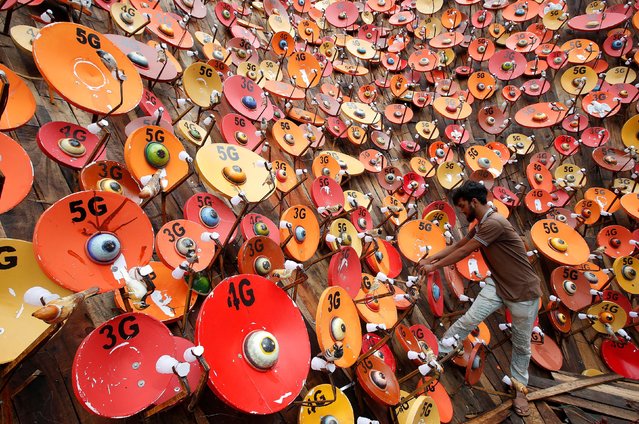 A worker decorates a pandal or a temporary platform for the upcoming Hindu festival of Durga Puja in Kolkata, India, September 29, 2019. (Photo by Rupak De Chowdhuri/Reuters) 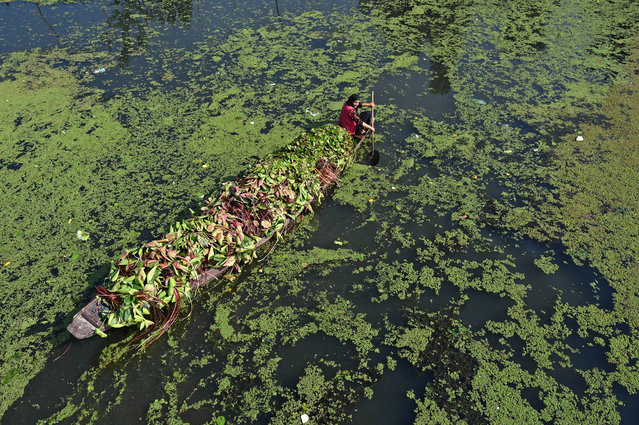 A woman makes her way on a shikara boat as she carries lotus roots for cattle feed on Dal Lake in Srinagar on September 19, 2019. (Photo by Tauseef Mustafa/AFP Photo) 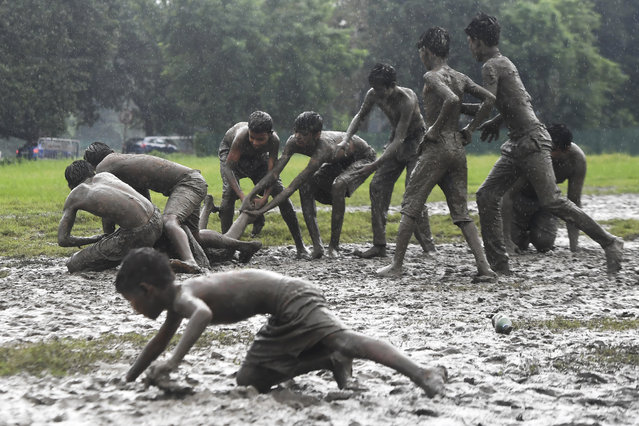 Children play a game of Kabaddi on water logged grounds in Kolkata on September 8, 2019. (Photo by Dibyangshu Sarkar/AFP Photo) 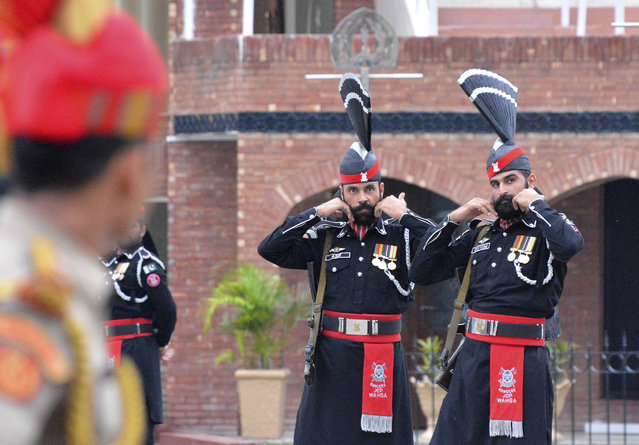 In this Friday, August 9, 2019, file photo, Pakistan Rangers soldiers face Indian Border Security Force soldiers at a daily closing ceremony on the Indian side of the Attari-Wagah border. India's recent clampdown has a long history in Kashmir and the conflict has existed since the late 1940s, when India and Pakistan won independence from the British empire and began fighting over rival claims to the Muslim-majority territory. India and Pakistan have fought two of their three subsequent wars over Kashmir, and each administers a portion of the region. India has long seen the Kashmiri struggle for self-determination as Islamabad's proxy war against New Delhi. (Photo by Prabhjot Gill/AP Photo/File) 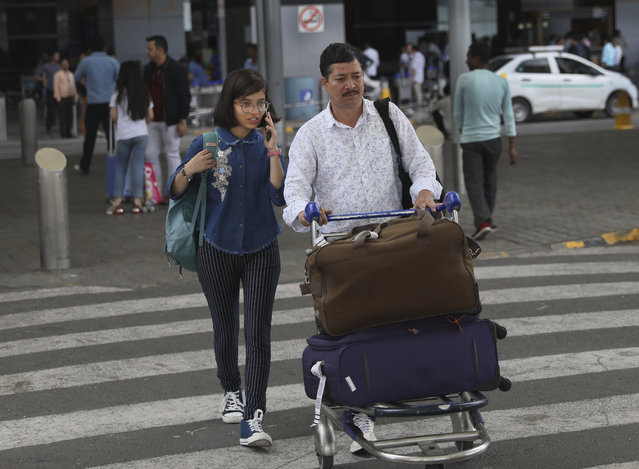 Indian child climate activist Ridhima Pandey, 11, with her father Dinesh Pandey arrives from New York at the Indira Gandhi International airport, in New Delhi, India, Thursday, September 26, 2019. Ridhima returned from her trip to the United Nations General Assembly, where she helped file a lawsuit, with children from around the world, against five countries for not tackling climate change. Pandey, from the northern state of Uttarakhand, previously sued the Indian government in 2017 for its inaction on the climate. (Photo by Manish Swarup/AP Photo) 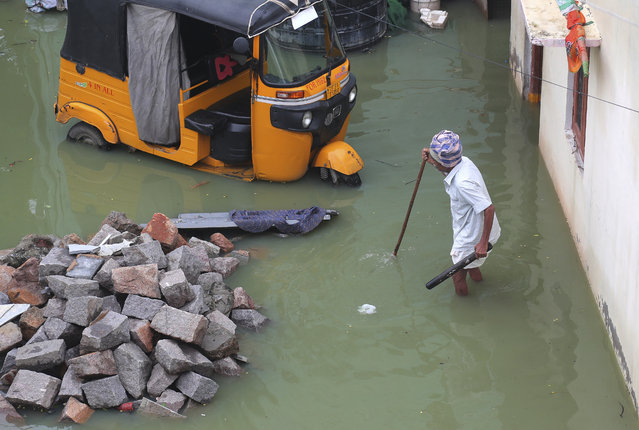 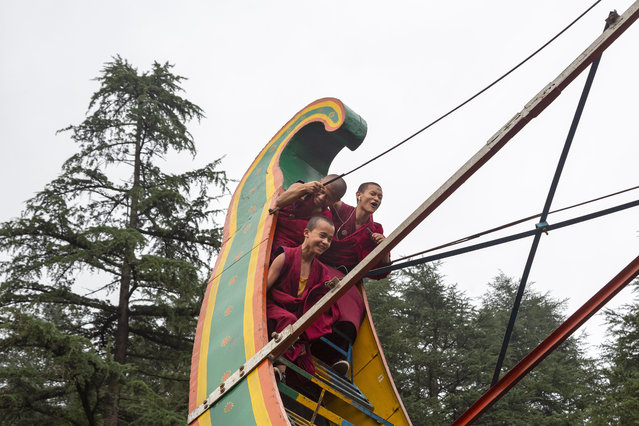 Novice Buddhist monks react as they ride a pendulum swing at a local fair in Dharmsala, India, Friday, September 6, 2019. These traditional annual fairs bring goods, food and entertainment to the residents and remain popular in small Indian towns. (Photo by Ashwini Bhatia/AP Photo) 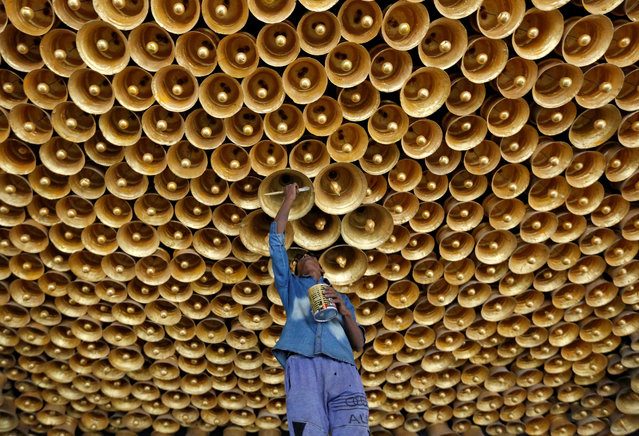 An artisan applies finishing touches to a decorative ceiling of a pandal or a temporary platform during preparations for the upcoming Hindu festival of Durga Puja in Kolkata, India, September 26, 2019. (Photo by Rupak De Chowdhuri/Reuters) 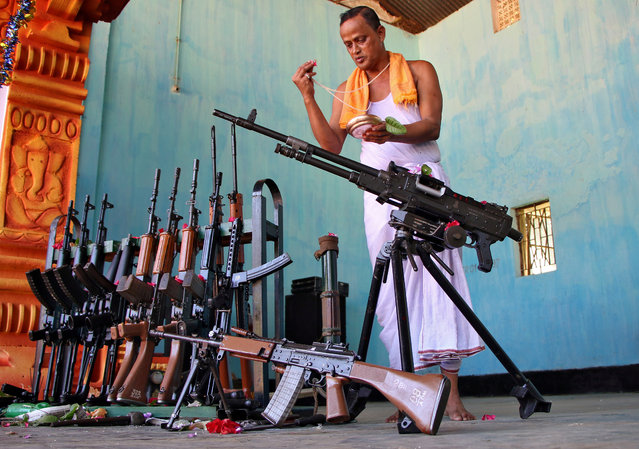 A Hindu priest worships next to weapons belonging to Tripura State Rifles during the Vishwakarma Puja or the festival of the Hindu deity of architecture and machinery in Agartala, India, September 18, 2019. (Photo by Jayanta Dey/Reuters) 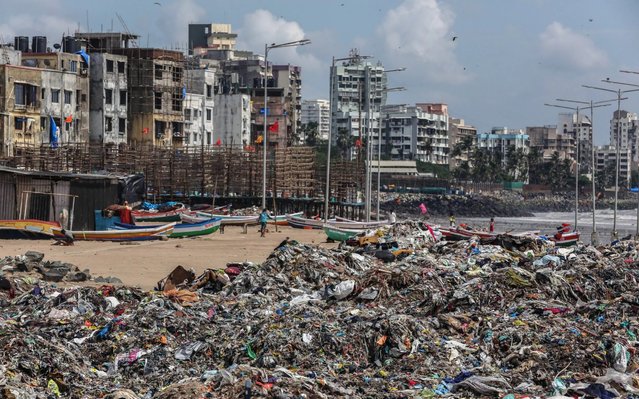 Indian people look for reusable things amidst left over eatables and plastic waste, near the Arabian Sea coast at Versova beach in Mumbai, India, 27 September 2019. Millions of people across the world are taking part in demonstrations demanding action on climate issues. The Global Climate Strike Week is held from 20 September to 27 September 2019. (Photo by Divyakant Solanki/EPA/EFE/Rex Features/Shutterstock) 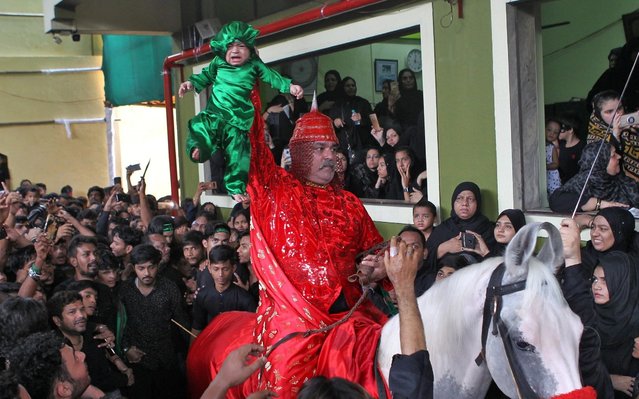 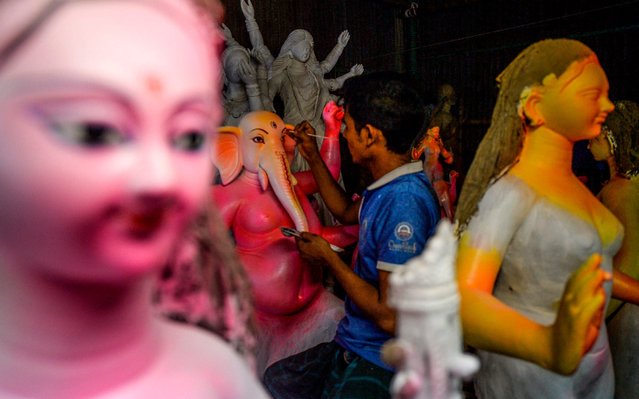 A young artist works on a clay idol of the Hindu goddess Durga in preparation for the upcoming Hindu festival “Durga Puja” in Old Dhaka on September 18, 2019. (Photo by Munir Uz Zaman/AFP Photo) 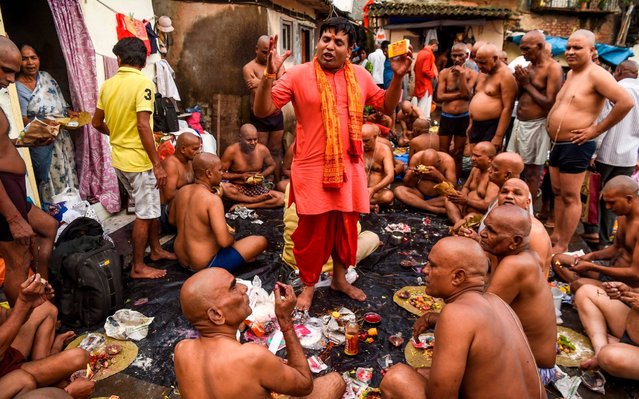 A priest assists Hindu devotees as they perform “Tarpan”, a ritual to pay obedience to one's forefathers on the last day for offering prayers to ancestors called “Pitrupaksh”, in Mumbai on September 28, 2019. In Hindu mythology, this day is also called “Mahalaya” and described as the day when the gods created the ten-armed goddess Durga to destroy the demon king Mahishasura who plotted to drive out the gods from their kingdom. (Photo by Indranil Mukherjee/AFP Photo) 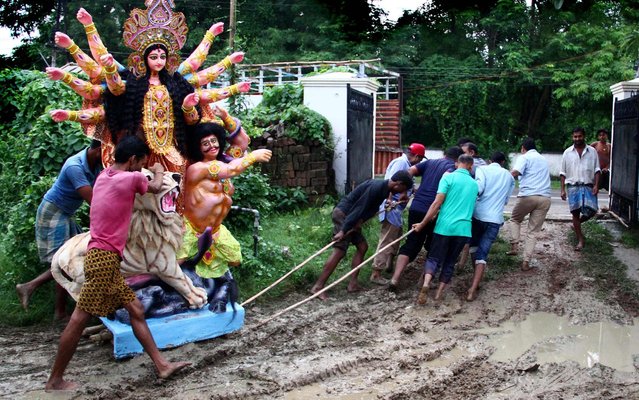