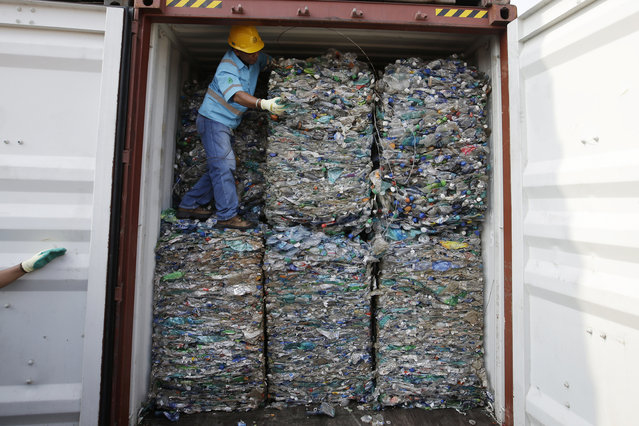 A worker stands inside a container full of plastic waste at Tanjung Priok port in Jakarta, Indonesia Wednesday, September 18, 2019. Indonesia is sending hundreds of containers of waste back to Western nations after finding they were contaminated with used plastic and hazardous materials. (Photo by Achmad Ibrahim/AP Photo) 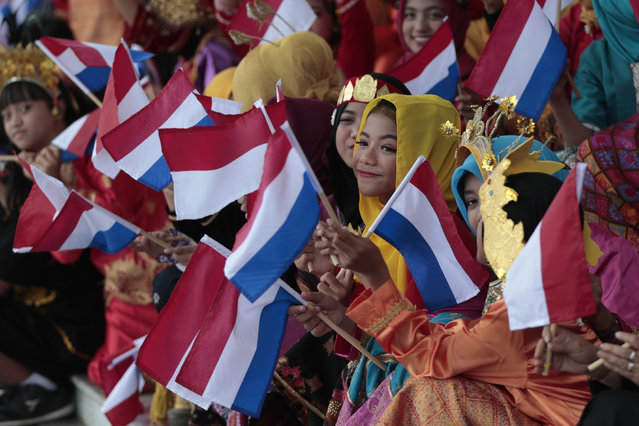 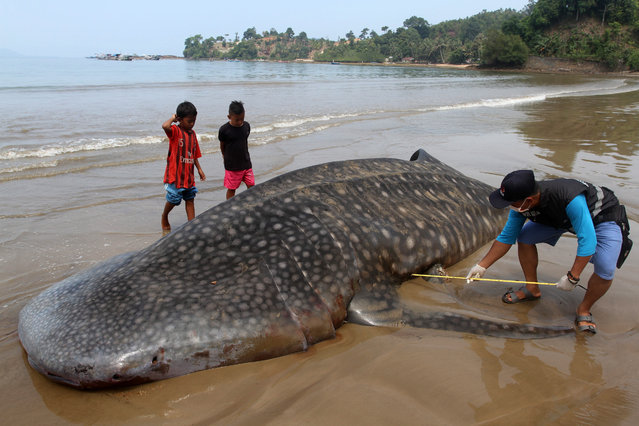 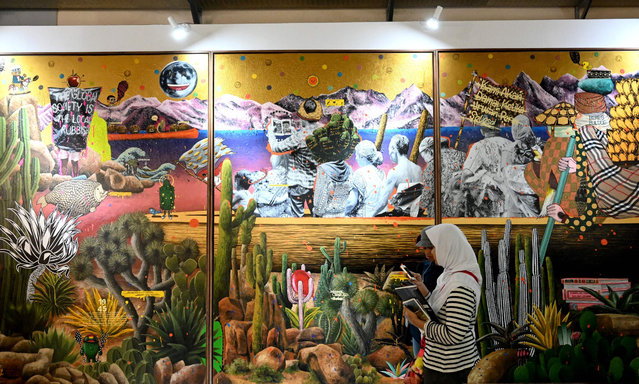 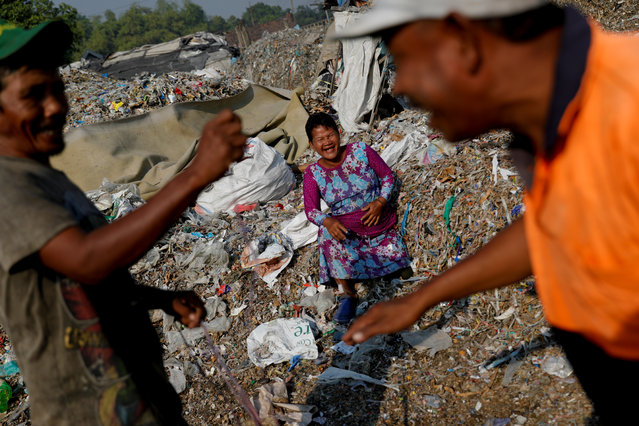 Sunarni laughs as her husband Salam jokes with his friend near a pile of rubbish at Bangun village in Mojokerto, East Java province, Indonesia, August 1, 2019. Salam said recycled rubbish paid for his children's schooling, and also bought a house for his family and livestock. “I have nine goats now”, said Salam, who works as a waste broker between villagers and a nearby paper factory and says his job is easier than farming. (Photo by Willy Kurniawan/Reuters) 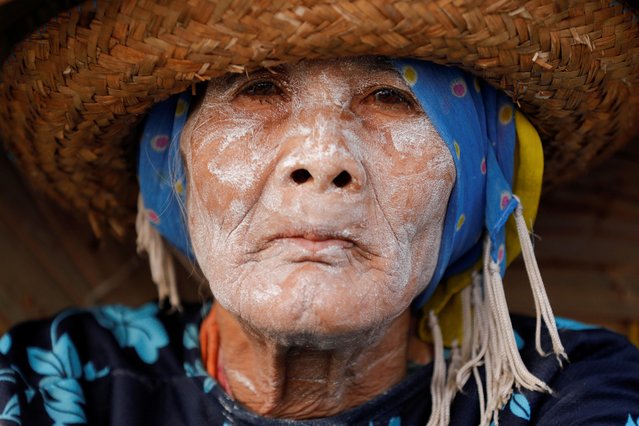 A woman with traditional cooling-face–powder looks on as she sell fruits and vegetables on a wooden boat at Martapura river in Lok Baintan village near Banjarmasin, South Kalimantan province, Indonesia, September 29, 2019. (Photo by Willy Kurniawan/Reuters) 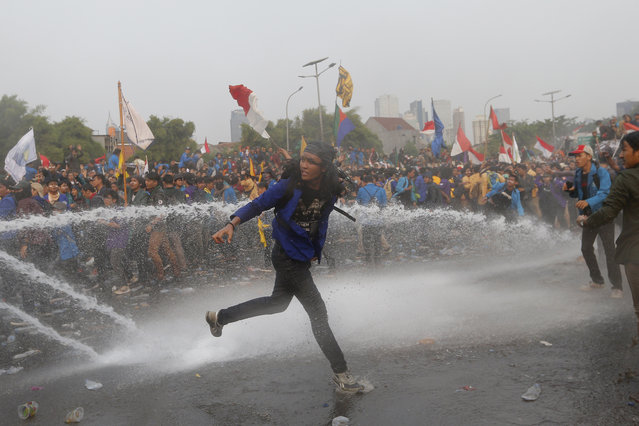 Student protesters are sprayed with a police water cannon truck during a protest outside the parliament in Jakarta, Indonesia, Tuesday, September 24, 2019. Police fired tear gas and water cannons Tuesday to disperse thousands of rock-throwing students protesting a new law that they said has crippled Indonesia's anti-corruption agency. (Photo by Tatan Syuflana/AP Photo) 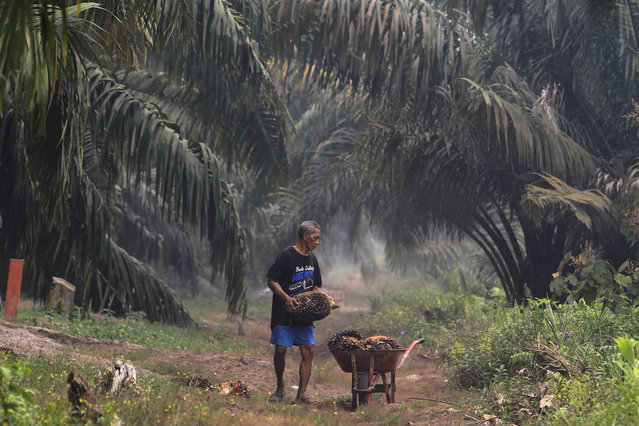 A man carry palm fruits at a palm oil plantation blanketed by haze from wildfires in Pekanbaru, Riau province, Indonesia, Saturday, September 14, 2019. Nearly every year, Indonesian forest fires spread health-damaging haze across the country and into neighboring Malaysia and Singapore. The fires are often started by smallholders and plantation owners to clear land for planting. (Photo by AP Photo/Stringer) 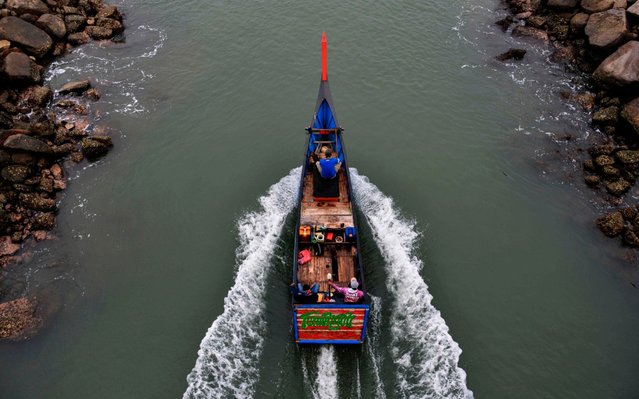 Fishermen head out to sea in Banda Aceh on September 23, 2019. (Photo by Chaideer Mahyuddin/AFP Photo) 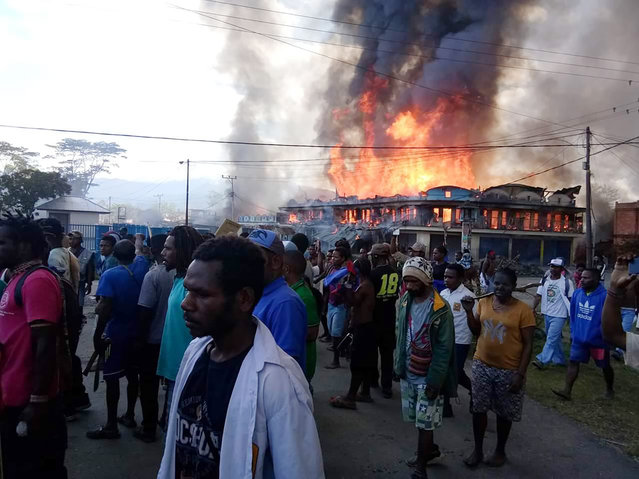 People gather as shops burn in the background during a protest in Wamena in Papua province, Indonesia, Monday, September 23, 2019. Hundreds of protesters in Indonesia's restive Papua province set fire to homes and other buildings Monday in a protest sparked by rumors that a teacher had insulted students, and a soldier was killed in another protest in the region, police said. (Photo by AP Photo/Stringer) 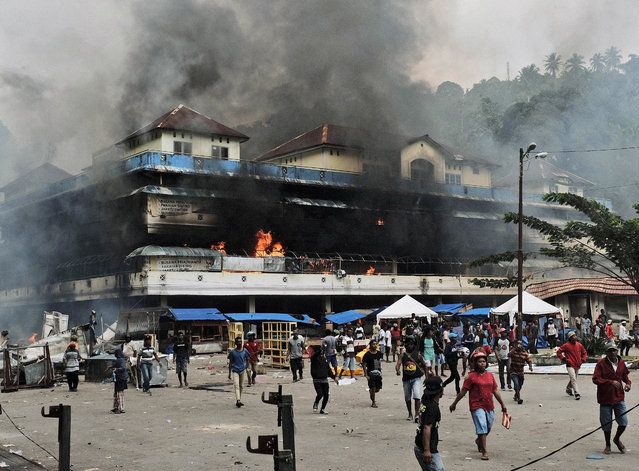 Local market is seen burning during a protest in Fakfak, Papua province, Wednesday, August 21, 2019. Indonesia has deployed over 1,000 security personnel to the restive province of West Papua amid spreading violent protests sparked by accusations that security forces had arrested and insulted Papuan students in East Java. (Photo by AP Photo/Beawiharta) 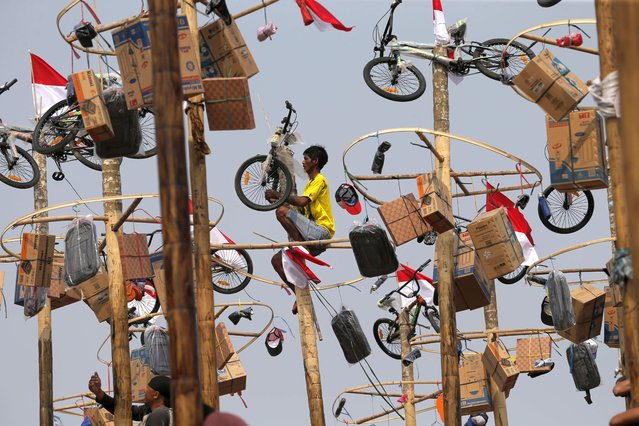 An Indonesian man retrieves his prize after climbing up a greased pole during a greased-pole climbing competition held as part of Independence Day celebrations at Ancol Beach in Jakarta, Indonesia. Saturday, August 17, 2019. Indonesia is celebrating its 74th anniversary of independence from the Dutch colonial rule. (Photo by Tatan Syuflana/AP Photo) 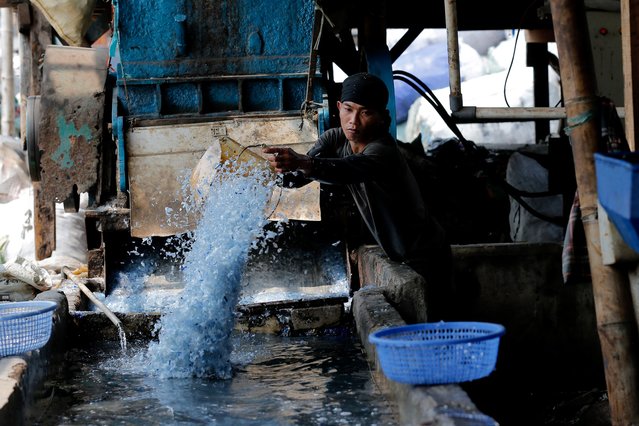 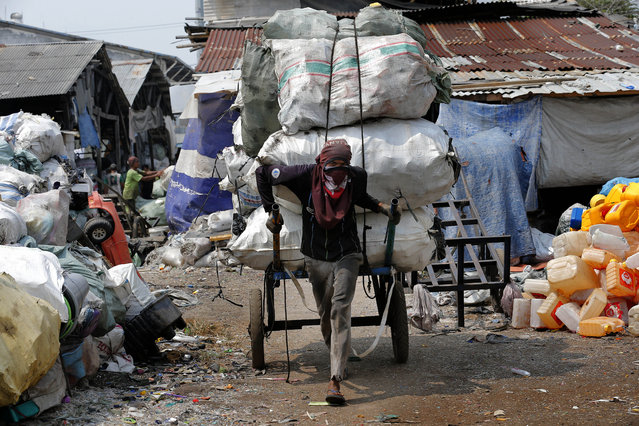 A worker pulls the cart containing plastics to be recycled at a collection point in Jakarta, Indonesia, Tuesday, September 17, 2019. (Photo by Tatan Syuflana/AP Photo) 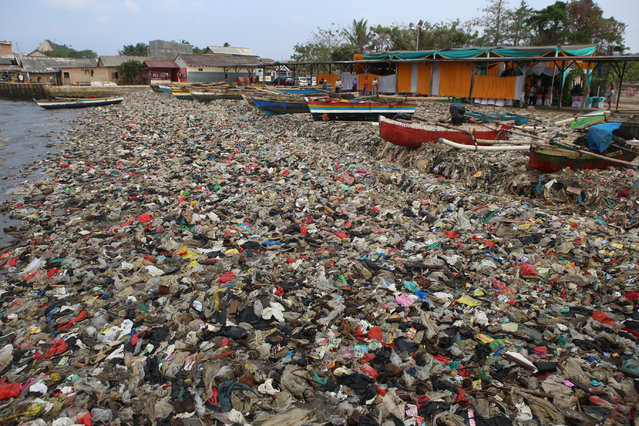 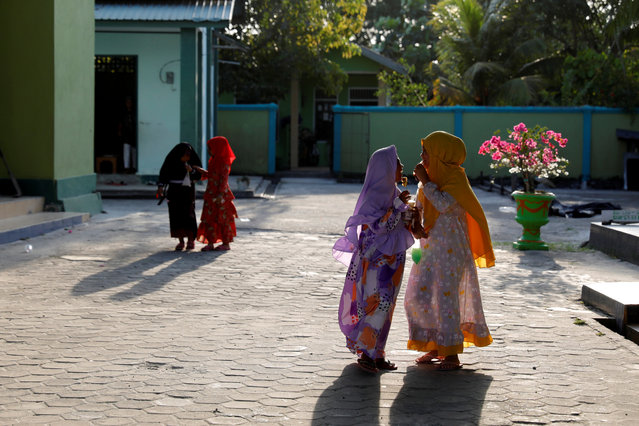 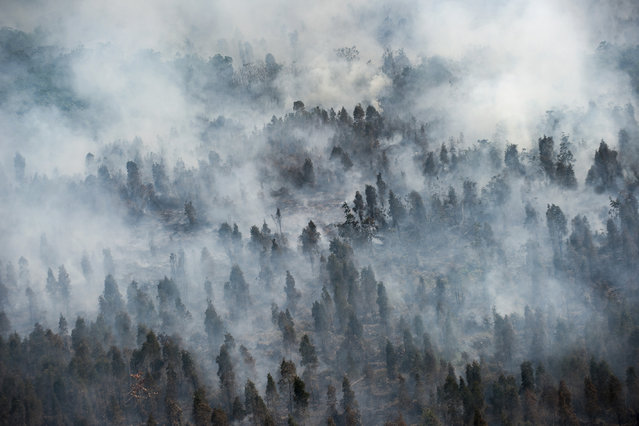 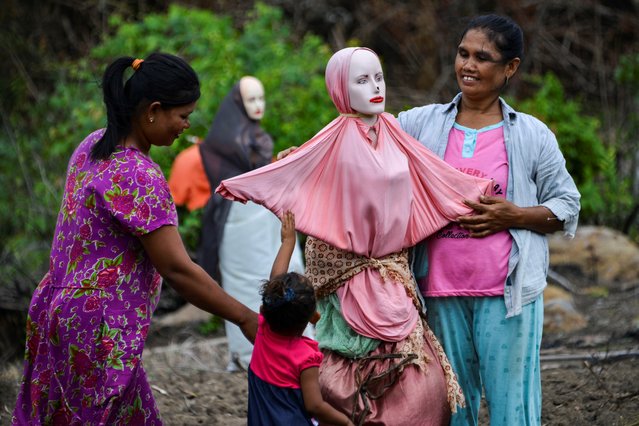 This picture taken on August 26, 2019 shows villagers setting up a mannequin scarecrow on a paddy field in Lamteuba, Indonesia's Aceh province. (Photo by Chaideer Mahyuddin/AFP Photo) 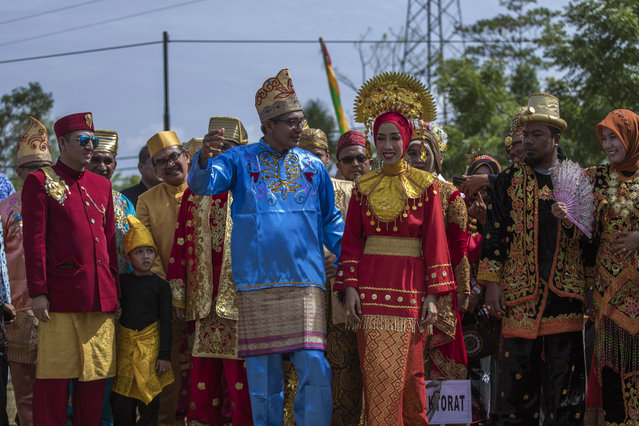 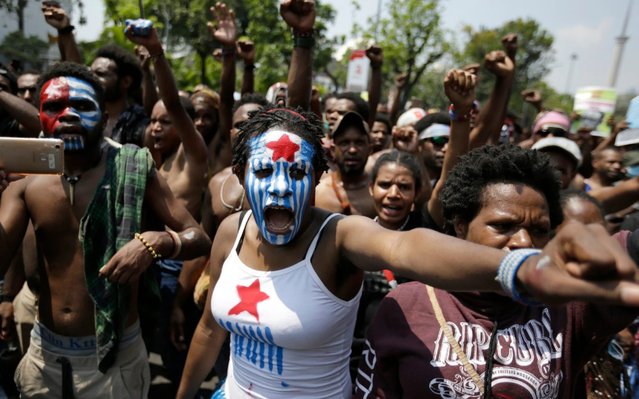 A Papuan activist with her face painted with the colors of the separatist Morning Star flag shouts slogans during a rally near the presidential palace in Jakarta, Indonesia, Thursday, August 22, 2019. A group of West Papuan students in Indonesia's capital staged the protest against racism and called for independence for their region. (Photo by Dita Alangkara/AP Photo) 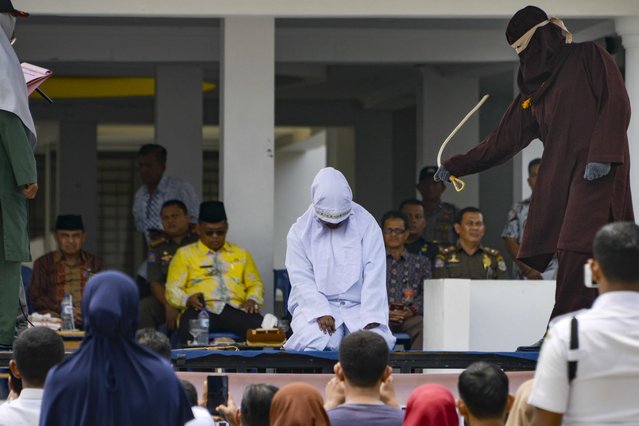 A woman (C, in white) is whipped in public by a member of the Sharia police in Banda Aceh on September 19, 2019. A trio of canoodling couples were publicly flogged in Indonesia's Aceh province on September 19, charged with breaking local Islamic law that outlaws public displays of affection. Despite international condemnation, whipping is a common punishment for a range of offences in the deeply conservative region on Sumatra island, including gambling, drinking alcohol, and having gay or pre-marital s*x. (Photo by Chaideer Mahyuddin/AFP Photo) 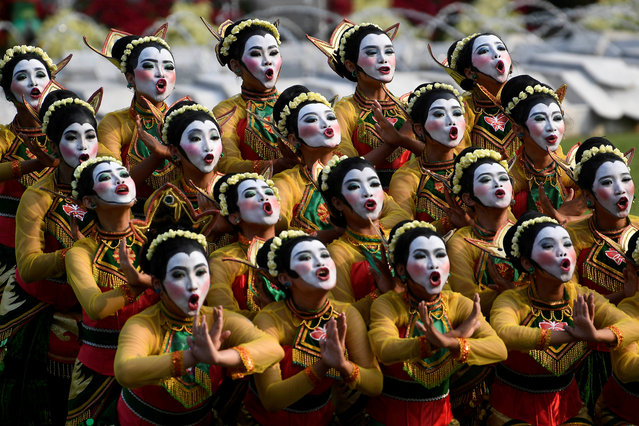 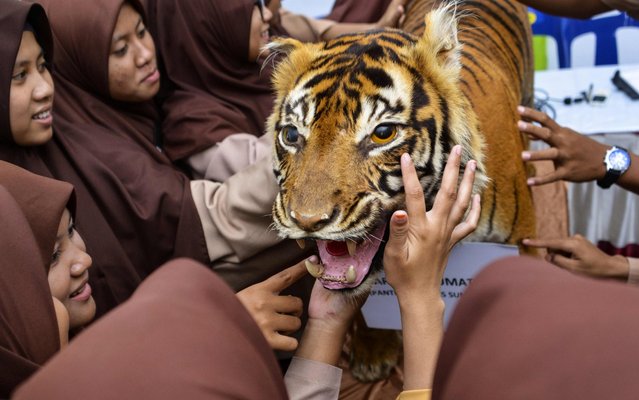 High school students interact with a stuffed Sumatran tiger, now used as a teaching aid, during a class on wildlife awareness and conservation issues in Lhoknga, Aceh province on September 7, 2019. (Photo by Chaideer Mahyuddin/AFP Photo) 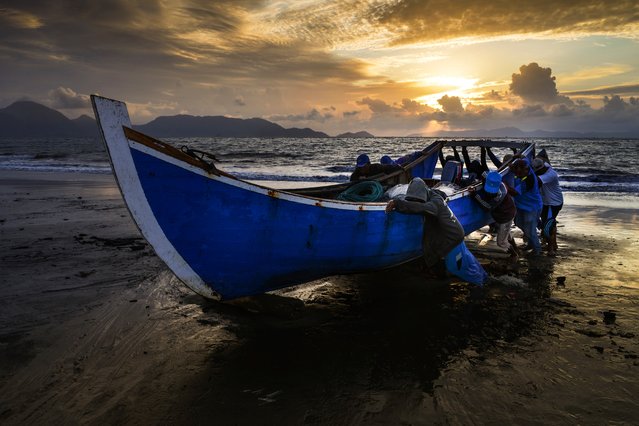