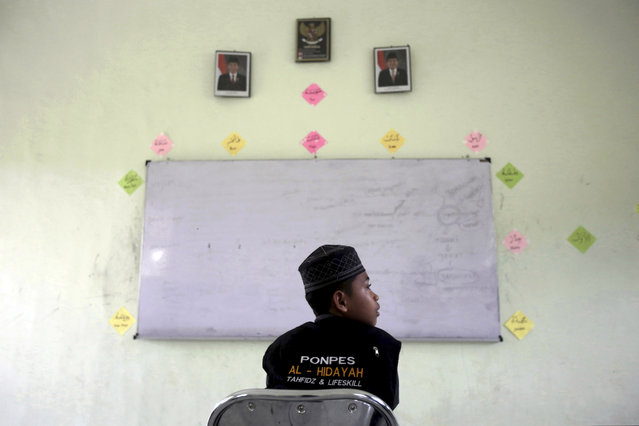 In this July 22, 2017, photo, a student sits in a classroom at Al Hidayah Islamic Boarding School in Sei Mencirim, North Sumatra, Indonesia. Pupils at the boarding school are the sons of Islamic militants whose fathers were killed in police raids or are in prison for terrorism offenses. Former radical preacher Khairul Ghazali set founded the school to prevent the boys, who were ostracized and taunted at mainstream schools, from becoming the next generation of Indonesian jihadists. (Photo by Binsar Bakkara/AP Photo) 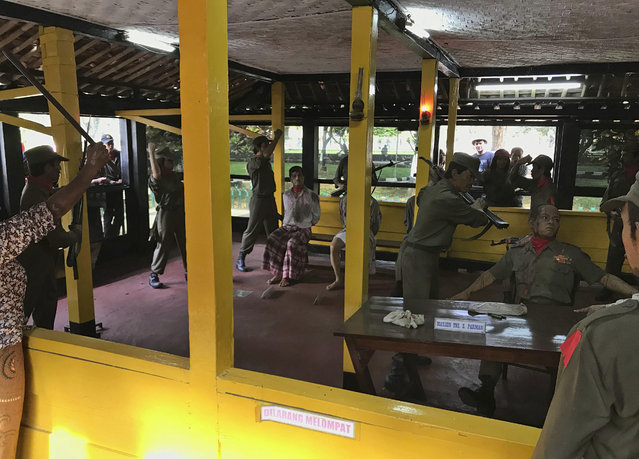 In this Sunday, October 15, 2017, photo, visitors look at a diorama depicting the torture and killing of six army generals and a junior officer in an abortive coup in 1965 that the military blamed on Indonesia's Communist Party and subsequently led to the anti-communist purge in 1965-1966, at Pancasila Sakti Monument in Jakarta, Indonesia. Declassified files have revealed new details of American government knowledge and support of an Indonesian army extermination campaign that killed several hundred thousand civilians during anti-communist hysteria in the mid-1960s. (Photo by Dita Alangkara/AP Photo) 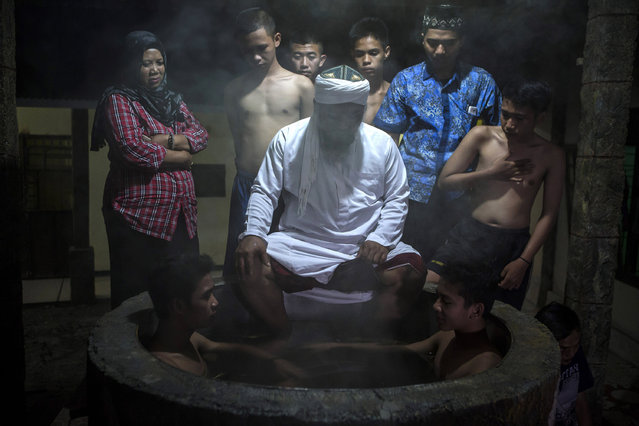 Ustad Ahmad Ischsan Maulana, the head of Nurul Ichsan Al Islami traditional rehabilitation centre, prays with recovering drug addicts who are immersed in a hot water herbal bath on September 16, 2017 in Purbalingga, Indonesia. Indonesian cleric Ahmad Ischsan Maulana started a traditional rehabilitation center 17 years ago in Purbalingga, Central Java, using traditional methods such as immersing his patients in boiling hot water between 10 to 30 minutes, herbal teas, prayer and counseling. Also known as “Kiai Suro Godog”, the Purbalingga center is one of the 160 across Indonesia that uses traditional methods and houses about 30 patients while Indonesia has become one of Southeast Asia’s biggest markets for narcotics over the past few years. Indonesian authorities recently expressed concerns over the street drugs entering the country and the adverse reactions caused by the abuse of a drug known as PCC. Based on local reports, at least one Indonesian schoolchild died last week in Southeast Sulawesi and over 50 suffered from seizures after consuming drinks that appeared to be spiked with prescription pills inscribed with the letters 'PCC,' which stands for 'Paracetamol Caffeine Carisoprodol'. Indonesian president Joko Widodo told police officers in July this year to shoot drug traffickers who resisted arrest, comments which has drawn comparisons to those of Philippines president Rodrigo Duterte, who launched an anti-drug crackdown that saw thousands of alleged drug dealers and drug users killed. Human Rights Watch have condemned Widodo's speech although political analysts have said it will likely be well received inside Indonesia where hard-line drug policies are popular. (Photo by Ulet Ifansasti/Getty Images) 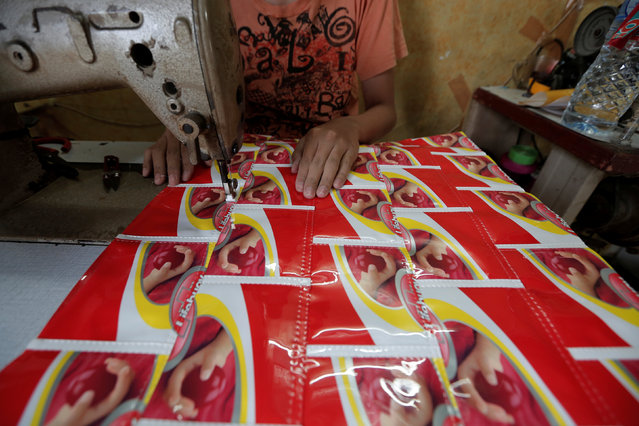 A worker makes bags from recycled plastic waste at the Trashion workshop in Jakarta, Indonesia on August 18, 2017. (Photo by Reuters/Beawiharta) 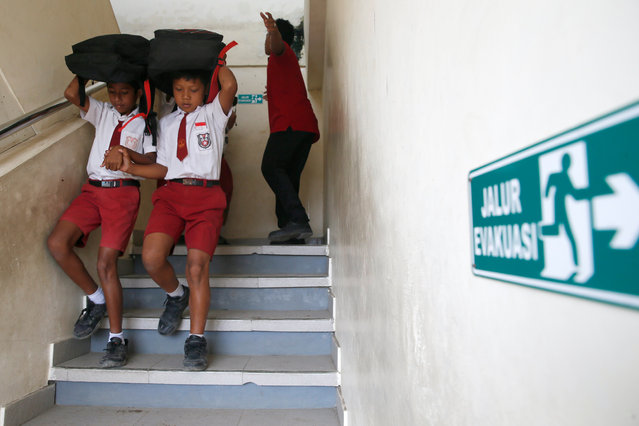 Indonesian students take part in an earthquake and tsunami evacuation drill in Nusadua, Bali, Indonesia, 15 August 2017. Hundreds of students and volunteers, including rescue teams, took part in a drill to prepare emergency response procedures for earthquakes and tsunamis. (Photo by Made Nagi/EPA) 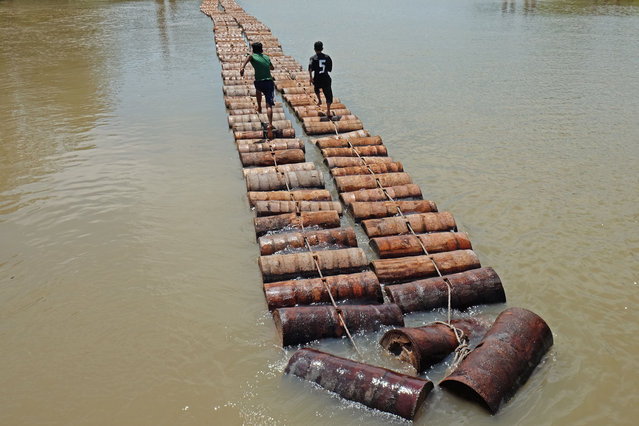 Participants race over floating sago palm trunks during a traditional cultural festival on September 26, 2017 in Bokor, Indonesia. Participants must keep the sago stems straight while pushing and the audience must take into account the safety of themselves to not be crushed. Through the people's party, one understands the daily activities and life of local residents. (Photo by Afrianto Silalahi/Barcroft Images) 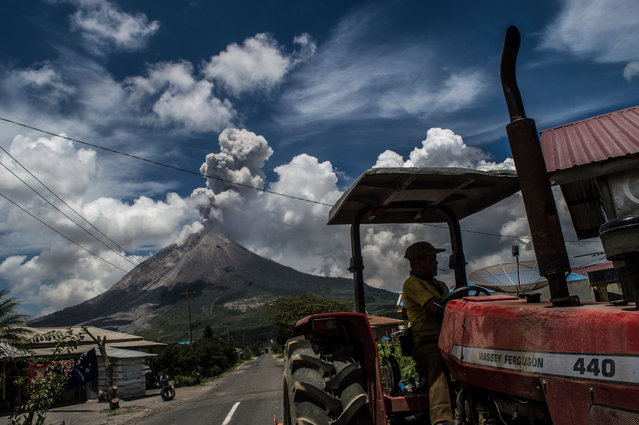 Seen the tractor on the road with the backround Sinabung volcano during eruption in Naman village, Namanteran subdistrict, Karo, North Sumatra province, Indonesia on October 05, 2017. Sinabung volcano is the one from 130 volcanoes in highest activities were now on alaert status as mount Agung in Bali. (Photo by Sutanta Aditya/Barcroft Images) 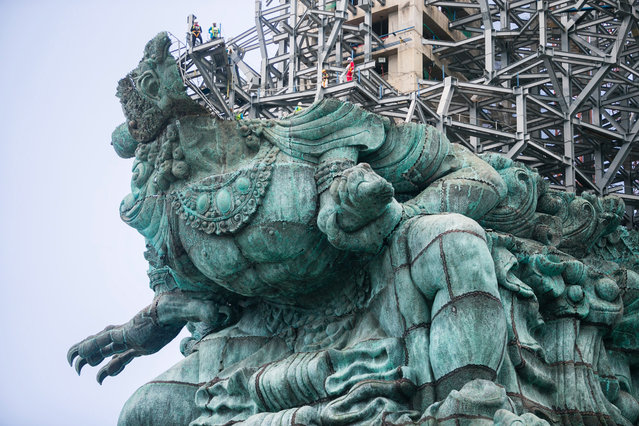 Workers are seen during the construction of Garuda Wisnu Kencana statue in Ungasan, Bali, Indonesia, 25 October 2017. The statue of the Hindu god Wisnu astride the mythical bird Garuda is to be claimed as the world's biggest statue. The statue is around 120m high and 64m wide and is targeted to be finished in September 2018. (Photo by Made Nagi/EPA/EFE) 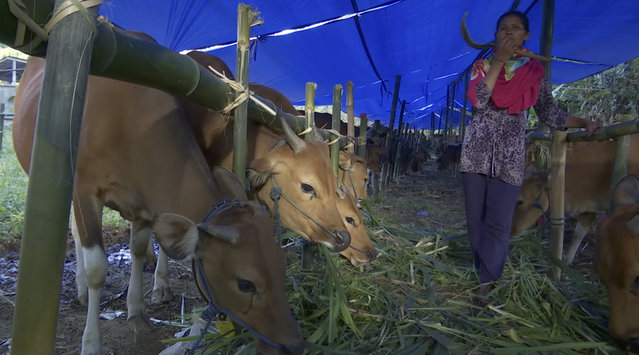 In this image made made from video, cows graze at a shelter in Karangasem, Indonesia, Friday, September 29, 2017. Villagers have been working to save some of Bali's gently-lowing cows, prized for their hardiness and doe-like temperament, from the tropical island's menacing Mount Agung volcano. (Photo by AP Photo) 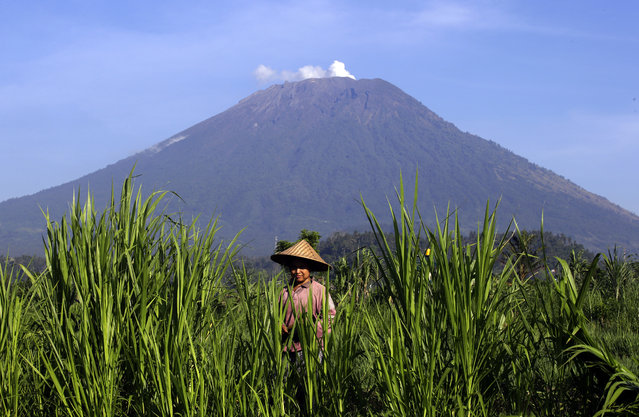 A farmer works on a filed with Mount Agung volcano in the background in Karangasem, Bali island, Indonesia, Wednesday, October 25, 2017. It has been a month since authorities raised the volcano's alert status to the highest level after a sudden increase in tremors. It last erupted in 1963, killing more than 1,000 people. (Photo by Firdia Lisnawati/AP Photo) 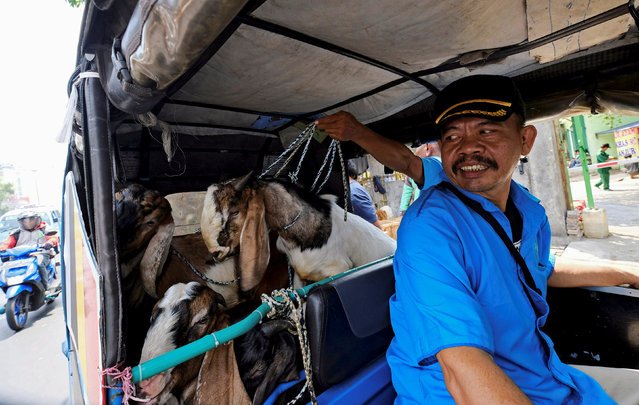 A worker loads a goat into a bajaj taxi for delivery for the upcoming Muslim Eid Al-Adha holiday at a market in Jakarta, Indonesia August 30, 2017. (Photo by Reuters/Beawiharta) 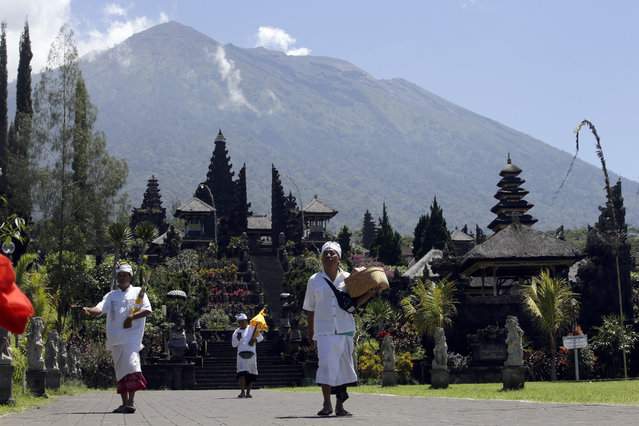 Balinese religious devotees walk as they visit the Besakih temple with Mount Agung volcano in the background which is located only a few kilometers (miles) from the crater in Karangasem, Bali, Indonesia, Monday, October 30, 2017. Indonesia authorities lowered the alert status of Bali's Mount Agung volcano from the highest level on Sunday, following a significant decrease in activity in recent days. (Photo by Firdia Lisnawati/AP Photo) 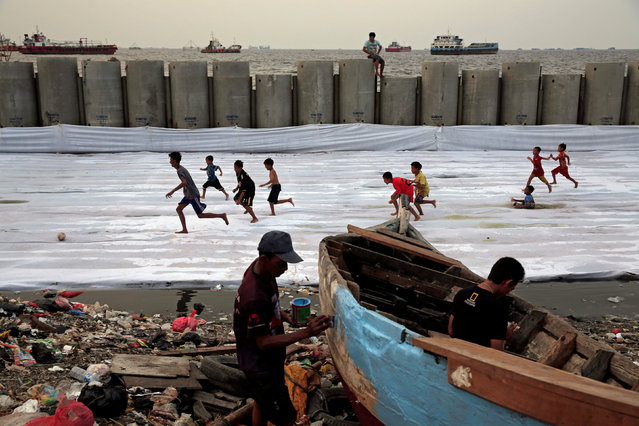 Children play soccer as fisherman paints his boat near breakwater at Cilincing area in Jakarta, Indonesia August 22, 2017. (Photo by Reuters/Beawiharta) 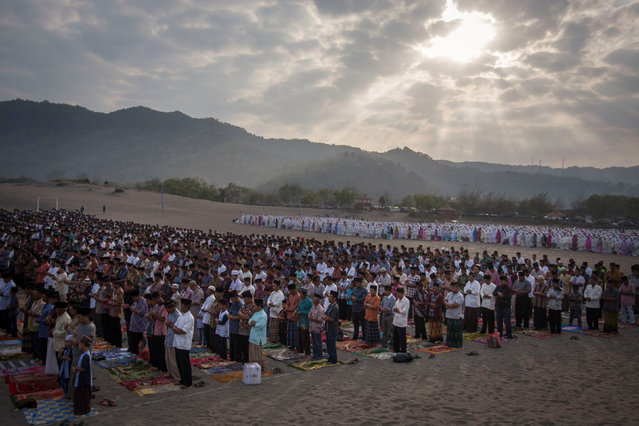 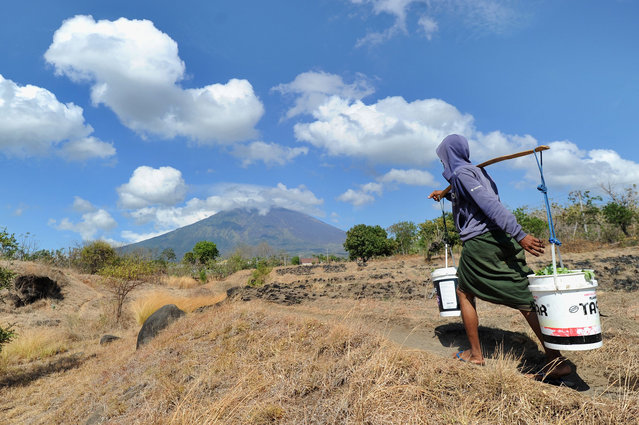 A man carries buckets down a path in the Kubu subdistrict of Karangasem Regency on the Indonesian resort island of Bali on September 26, 2017, as Mount Agung volcano looms in the background. More than 57,000 people have fled a volcano on the tourist island of Bali as rising magma and increased tremors fuel fears of an imminent eruption, officials said on September 26. (Photo by Sonny Tumbelaka/AFP Photo) 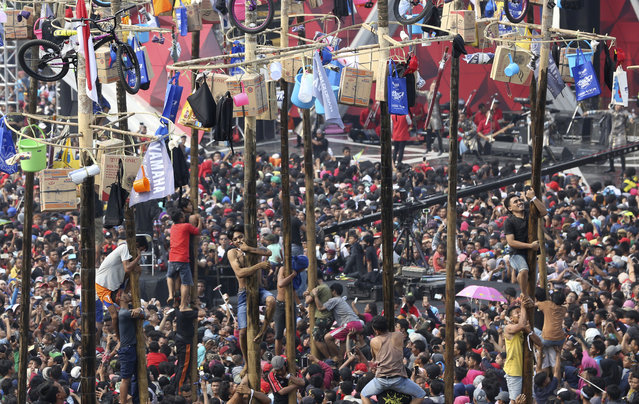 Participants struggle during a greased-pole climbing competition held as a part of independence day celebration at Ancol Beach in Jakarta, Indonesia, Thursday, August 17, 2017. Contestants race up to grab items ranging from buckets to bicycles hanging from the top of the poles as prize. Indonesia is celebrating its 72th anniversary of independence from the Netherlands. (Photo by Achmad Ibrahim/AP Photo) 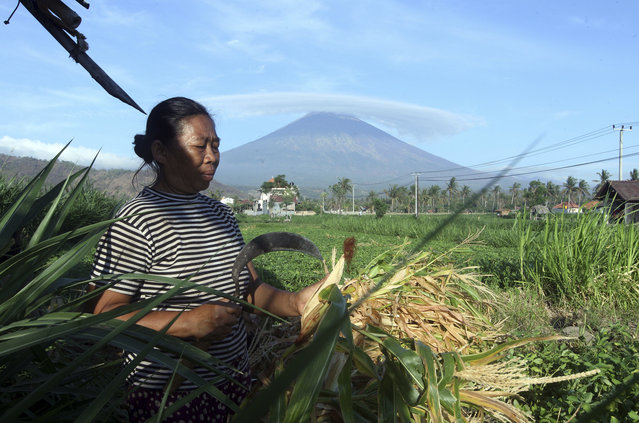 A woman works at a field with Mount Agung seen in the background in Amed, Bali, Indonesia, Tuesday, September 26, 2017. More than 57,000 people have fled the surrounds of Mount Agung volcano on the Indonesian tourist island of Bali, fearing an imminent eruption, officials said Tuesday. (Photo by Firdia Lisnawati/AP Photo) 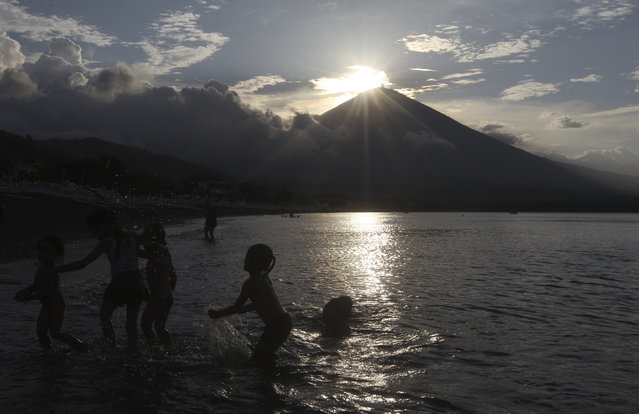 Children play at a beach with the Mount Agung volcano seen in the background during the sunset in Karangasem, Bali, Indonesia, Sunday, October 8, 2017. More than 140,000 people have fled from the surrounds of Mount Agung since authorities raised the volcano's alert status to the highest level after a sudden increase in tremors. It last erupted in 1963, killing more than 1,000 people. (Photo by Firdia Lisnawati/AP Photo) 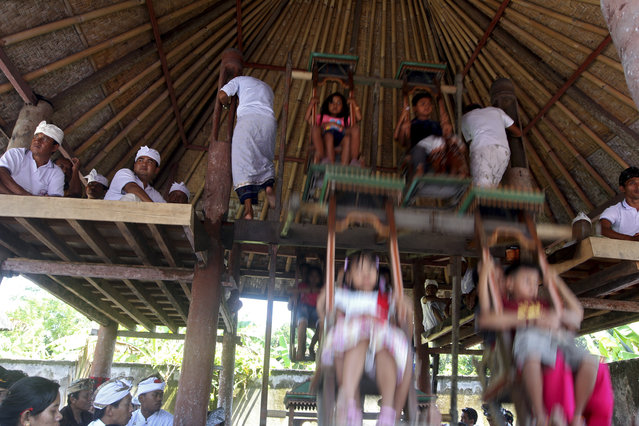 Balinese men sit as they wait for their turn to operate a traditional swing during Hindu festival of Galungan, celebrating the triumph of good over evil in Karangasem, Bali, Indonesia, Wednesday, November 1, 2017. (Photo by Firdia Lisnawati/AP Photo) 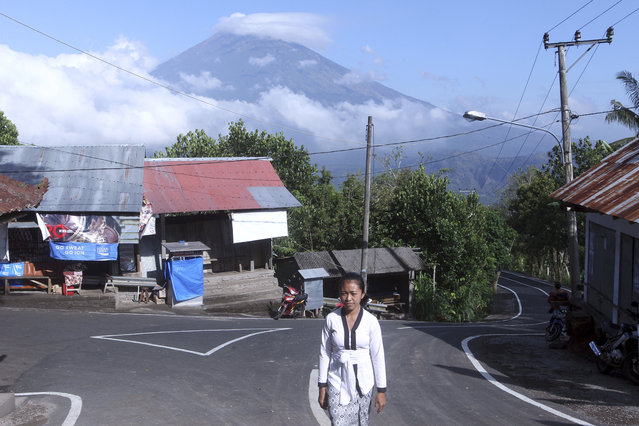 A Balinese woman walks toward a temple as Mount Agung volcano covered with clouds seen in the background at a village in Karangasem, Bali, Indonesia, Tuesday, September 26, 2017. An increasing frequency of tremors from the volcano indicates magma is continuing to move toward the surface and an eruption is possible, a disaster agency official said Tuesday. Tourists are cutting short their stay to the island, where an eruption would force the airport to close and strand thousands. (Photo by Firdia Lisnawati/AP Photo) 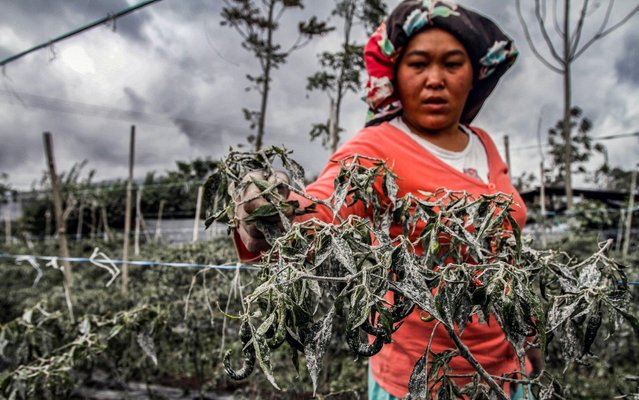 An Indonesian farmer harvests her chillies during the eruption of Mount Sinabung volcano in Karo, in North Sumatra on November 4, 2017. Sinabung roared back to life in 2010 for the first time in 400 years. After another period of inactivity it erupted once more in 2013, and has remained highly active since. (Photo by Ivan Damanik/AFP Photo) 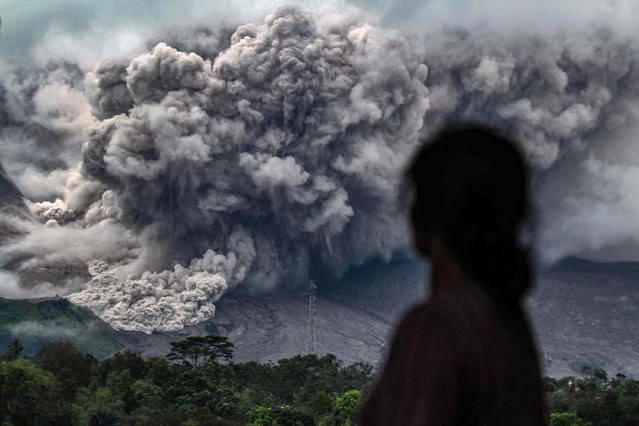 An Indonesian woman watches an eruption from the Mount Sinabung volcano from Tiga Pancur village, in Karo in North Sumatra on November 3, 2017. Sinabung roared back to life in 2010 for the first time in 400 years. After another period of inactivity it erupted once more in 2013, and has remained highly active since. (Photo by Ivan Damanik/AFP Photo)
Edit Del
13 Nov 2017 07:31:00, post received 0 comments
Publication archive:
←   →
Popular tags:
All tags
Last searches: