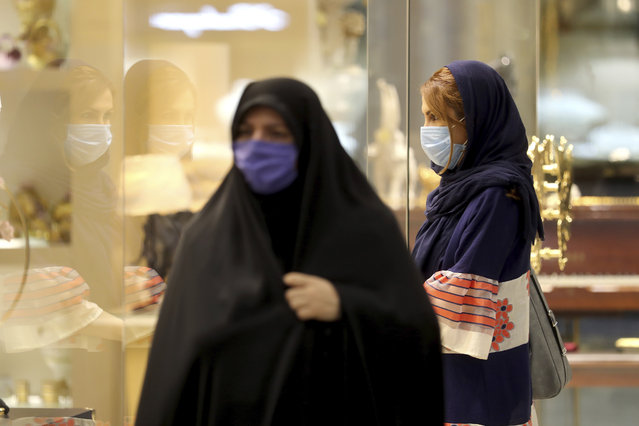 Women wearing protective face masks to help prevent spread of the coronavirus walk through a shopping center, in Tehran, Iran, Wednesday, August 19, 2020. Iran surpassed 20,000 confirmed deaths from the coronavirus on Wednesday, the health ministry said — the highest death toll for any Middle East country so far in the pandemic. (Photo by Ebrahim Noroozi/AP Photo) 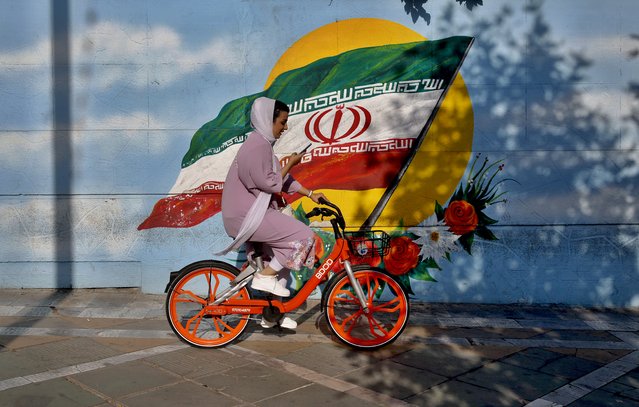 An Iranian woman rides a bicycle next to a mural of Iran's national flag in Tehran, Iran, 28 July 2020. According to figures released by the Iranian Health Ministry, Iran hits a new record of daily death toll since the coronavirus crisis started, announcing 235 deaths from coronavirus disease and more than 2,500 new cases diagnosed within a 24-hour period. (Photo by Abedin Taherkenareh/EPA/EFE) 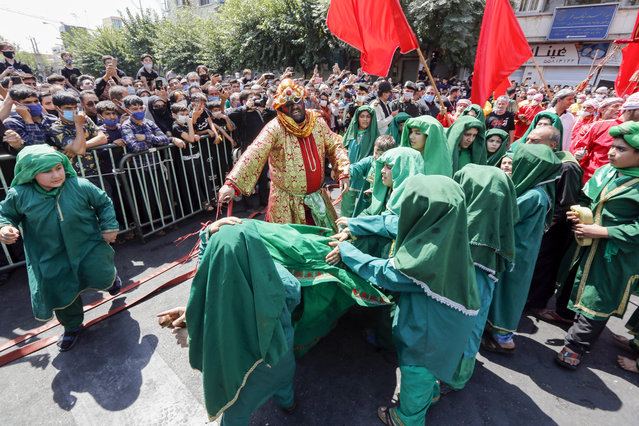 Iranian and Iraqi Shiite Muslims actors perform during the reenactment of the events of the tenth day of the month of Muharram which marks the peak of Ashura, in the Iranian capital Tehran on August 30, 2020. (Photo by AFP Photo/Stringer) 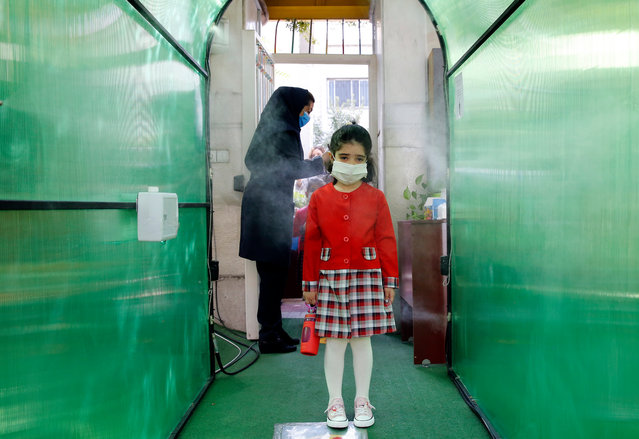 An Iranian elementary school girl wearing a face mask passes by a disinfection tunnel as she attends the first day of reopening the Bamdad Parsi private school, north of Tehran, Iran, 05 September 2020. Media reported that school has reopened in Iran during the coronavirus crisis in the country. (Photo by Abedin Taherkenareh/EPA/EFE) 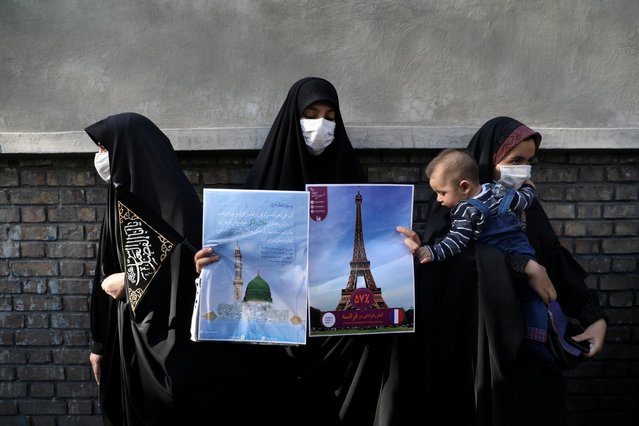 A protester holding banner of France's Eiffel Tower and Al Masjid Nabawi of Saudi Arabia, takes part in a protest to condemn the French magazine Charlie Hebdo for republishing cartoons insulting the Holy Prophet of Islam, in front of the French Embassy in Tehran, Iran on September 9, 2020. (Photo by Majid Asgaripour/WANA via Reuters) 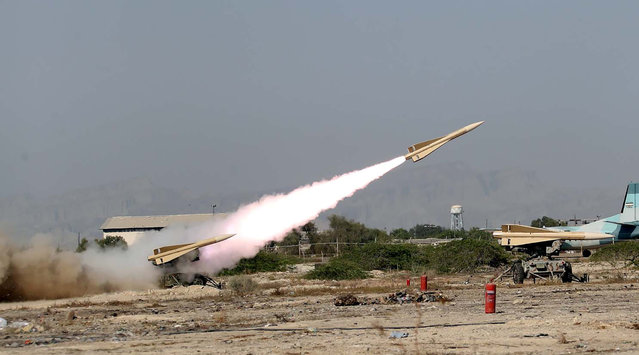 A missile is launched during the annual military drill, dubbed “Zolphaghar 99”, in the Gulf of Oman with the participation of Navy, Air and Ground forces, Iran on September 8, 2020. (Photo by WANA (West Asia News Agency) via Reuters) 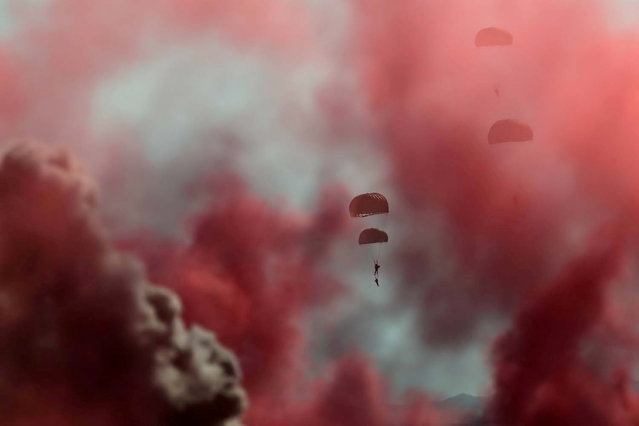 Member of the Iranian army paratroopers take part in the annual military drill, dubbed “Zolphaghar 99”, in the Gulf of Oman, Iran on September 8, 2020. (Photo by WANA (West Asia News Agency) via Reuters) 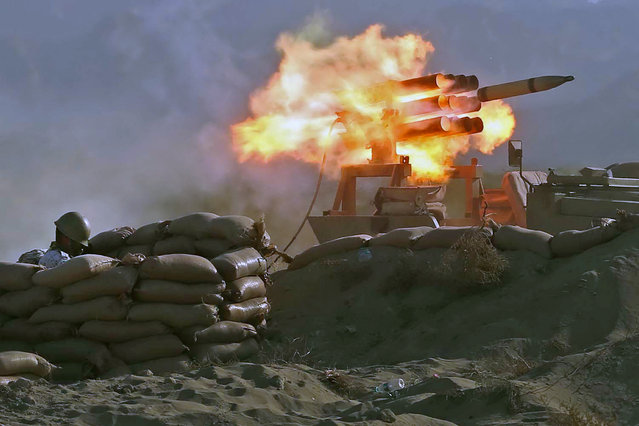 Members of the Iranian army fire missiles during the annual military drill, dubbed “Zolphaghar 99”, in the Gulf of Oman, Iran on September 8, 2020. (Photo by WANA (West Asia News Agency) via Reuters) 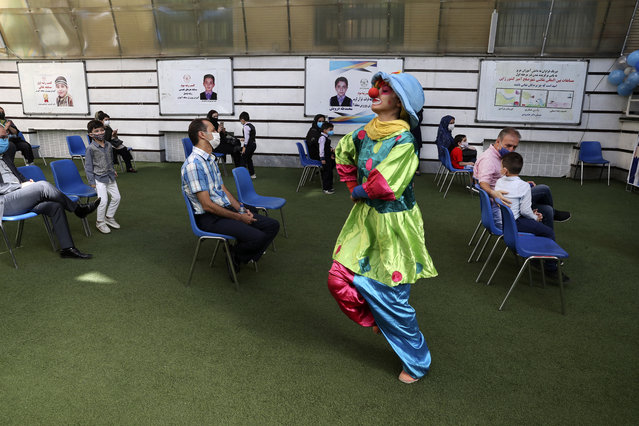 A clown performs as students and their parents wearing protective face masks to help prevent spread of the coronavirus attend the opening ceremony of the Hashtroudi school in Tehran, Iran, Saturday, September 5, 2020. Iran on Saturday opened the new school year after nearly seven months of closure as many expressed concern over a possible increase in infections of the Covid-19. (Photo by Vahid Salemi/AP Photo) 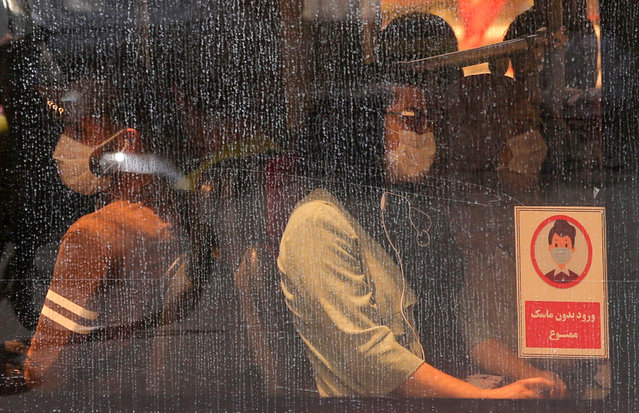 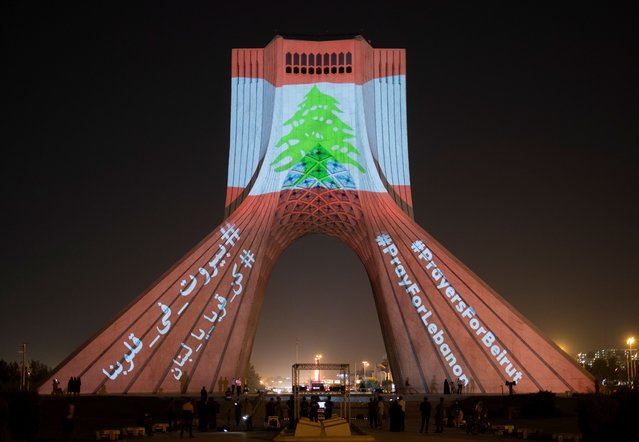 The video mapping is projected on the Azadi (Freedom) Monument in western Tehran, on August 5, 2020. A Lebanon flag projected on the Monument as a sign of unity between Iran and the Lebanon also a symbol of the Iranian people's sympathy for the victims of the recent explosions in Beirut. (Photo by Morteza Nikoubazl/NurPhoto via Getty Images) 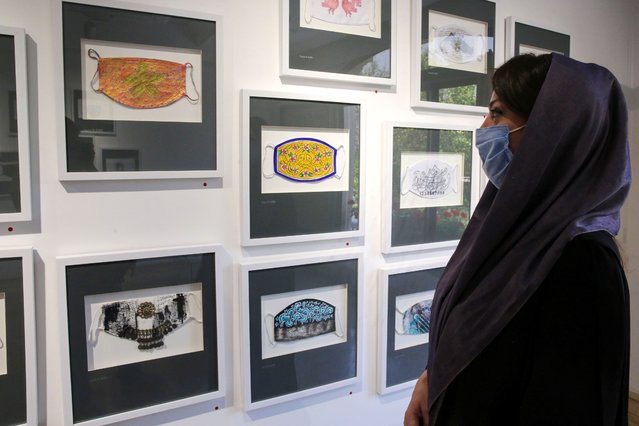 An Iranian woman looks at mask-themed artworks on display at an art exhibit in Cama gallery in the capital Tehran on August 1, 2020, during the COVID-19 pandemic. (Photo by Atta Kenare/AFP Photo) 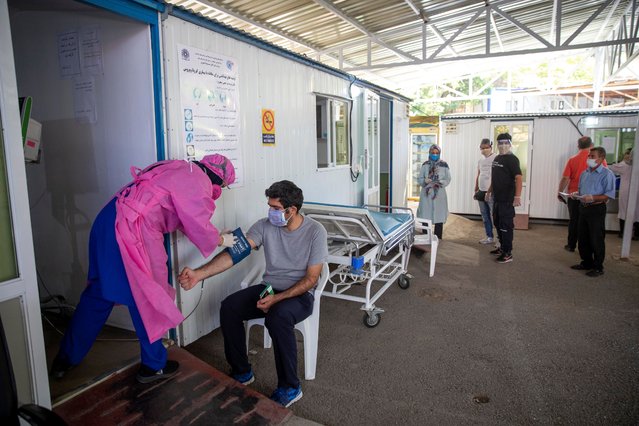 A medical staff member checks a man's blood pressure outside of Masih Daneshvari Hospital on August 19, 2020 in Tehran, Iran. Iran is experiencing a second wave of infections. After a dip in the middle of April the death toll has now reached over 100 people a day. Iran has been the country worst hit by the coronavirus in the Middle East. (Photo by Majid Saeedi/Getty Images) 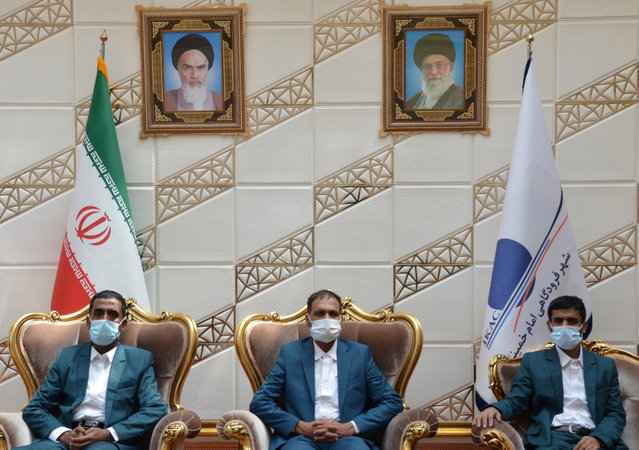 Three Iranian fishermen, who, according to maritime security officials, were released by Somali pirates after being held for five years, pose for a photo in the VIP hall of Imam Khomeini Airport, in Tehran, Iran on August 21, 2020. (Photo by WANA (West Asia News Agency) via Reuters) 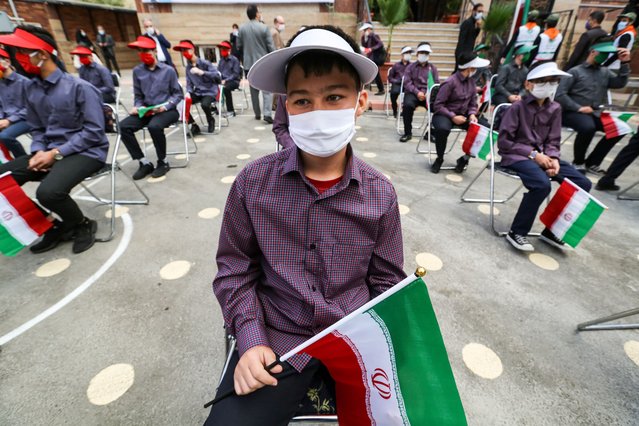 Iranian students wearing mask are seen in school after Ministry of Education of Iran plans the opening of schools and education to be done remotely in some schools according to the coronavirus (Covid-19) risk level in Tehran, Iran on September 05, 2020. (Photo by Atta Kenare/AFP Photo) 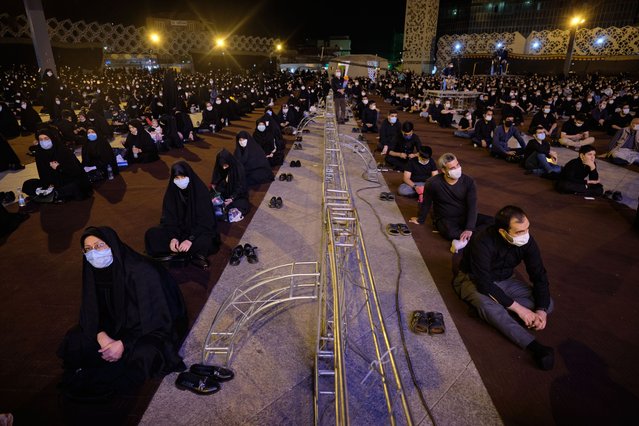 Men (R) and women wearing protective face masks separated from each other by a fence during a Moharram religious ceremony in the Imam Hussein square in southern Tehran on August 25, 2020. Shiite mourners have attended a religious ceremony to mark the holy month of Moharram while Health officials urged religious leaders to follow health protocols to prevent further outbreaks of the new coronavirus disease. (Photo by Morteza Nikoubazl/NurPhoto via Getty Images) 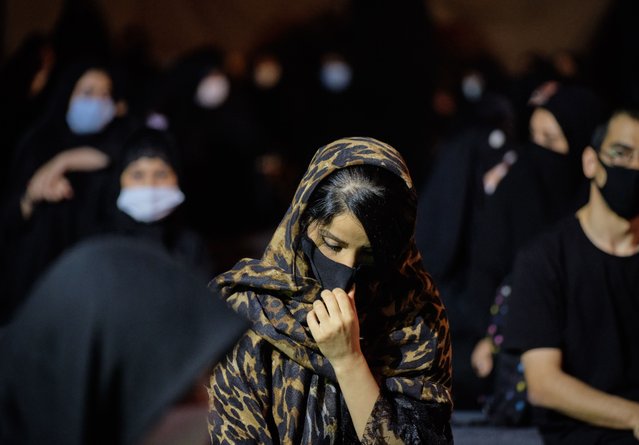 An Iranian Shiite Muslim wearing a protective face mask attends a Muharram mourning ceremony in southern Tehran on August 28, 2020. The new coronavirus (COVID-19) put the country in the red situation, and the health officials warned people for observing social distancing and health protocols in the Muharram mourning ceremonies and being ready for the third wave of the COVID-19 disease that will begin in the fall. (Photo by Morteza Nikoubazl/NurPhoto via Getty Images) 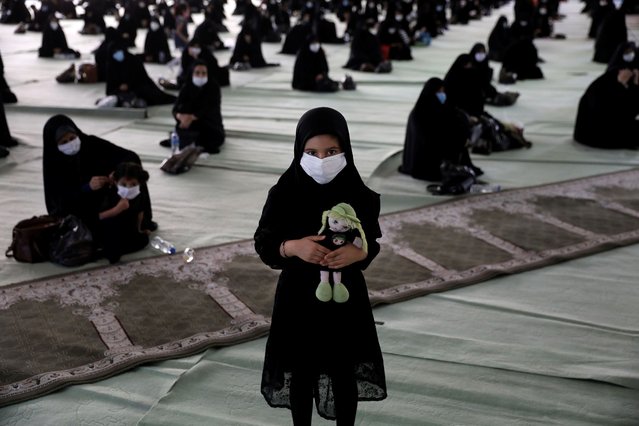 A girl wearing a protective face mask to help prevent spread of the coronavirus holds her doll as she attends a mourning ceremony to commemorate the 7th century death of Prophet Muhammad's grandson Hussein, one of Shiite Islam's most beloved saints, who was killed in a battle in Karbala in present-day Iraq, at the Tehran University Musalla, Iran, Saturday, August 29, 2020. The organizers arranged for the processions to take place with physical distancing, made face masks mandatory, checked mourners' body temperature and had them use hand sanitizers in an attempt to keep the gathering safe. Every year, millions of believers and followers of Shiite Islam flock to mosques for the ritual but this year the virus pandemic has scaled it down. (Photo by Vahid Salemi/AP Photo) 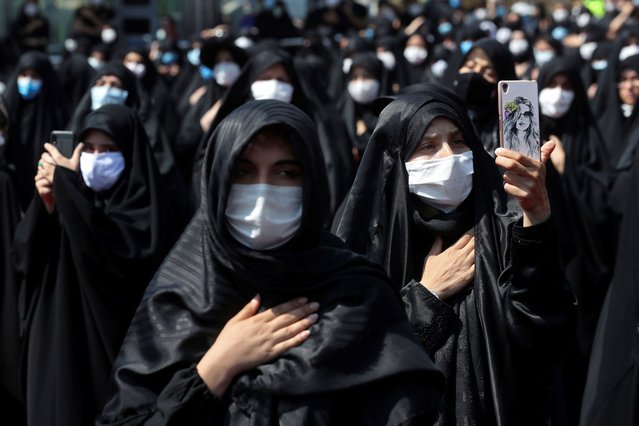 People wearing protective face masks to help prevent spread of the coronavirus mourn during an annual ceremony commemorating Ashoura, the anniversary of the 7th century death of Imam Hussein, a grandson of Prophet Muhammad, and one of Shiite Islam's most beloved saints, who was killed in a battle in Karbala in present-day Iraq, at the Saleh shrine in northern Tehran, Iran, Sunday, August 30, 2020. In Iran, which has the largest number of deaths from the coronavirus in the region, authorities allowed limited mourning rituals, urged social distancing and made wearing masks mandatory. (Photo by Ebrahim Noroozi/AP Photo) 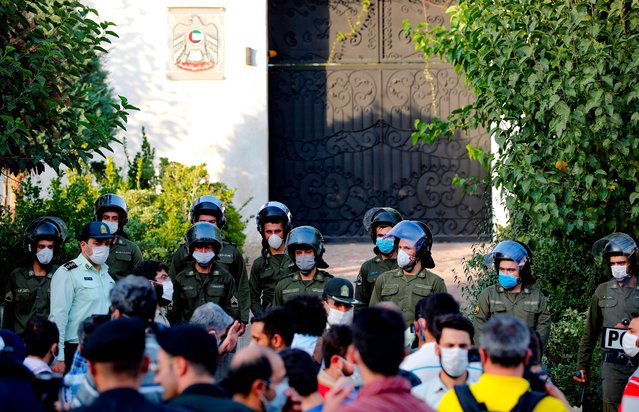 Security forces stand guard as Iranian students gather during a protest against a US-brokered deal between Israel and the UAE to normalise relations, in front of the UAE embassy in the capital Tehran, on August 15 2020. (Photo by AFP Photo/Stringer) 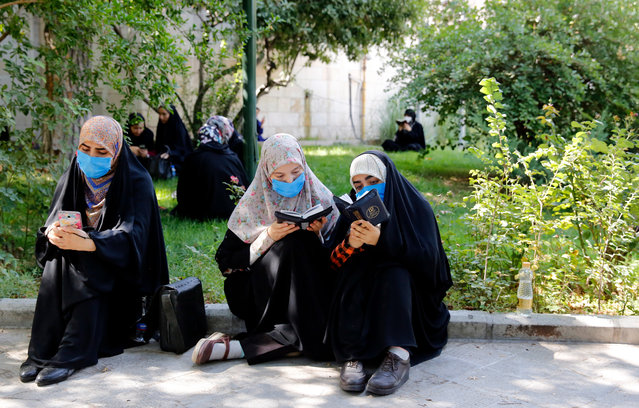