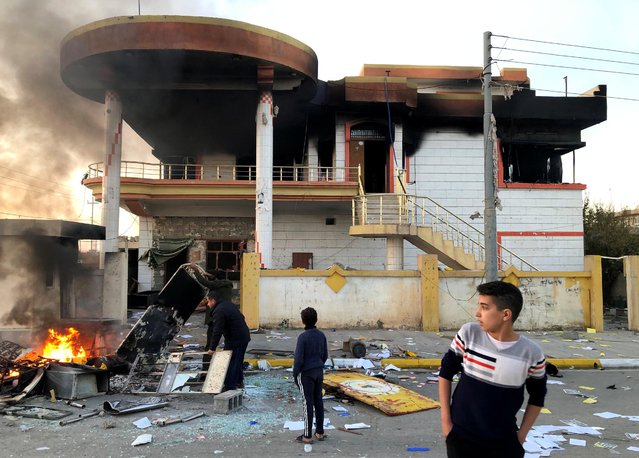 The headquarters of the Kurdistan Democratic Party (PDK) is seen after it was burnt during anti-government protests on the outskirts of Sulaimaniyah, Iraq on December 8, 2020. (Photo by Ako Rasheed/Reuters) 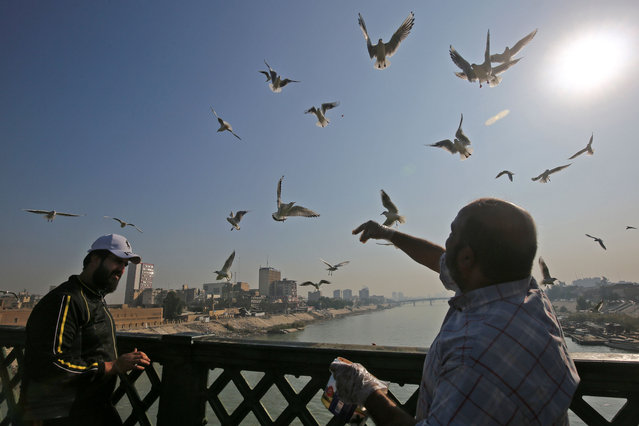 An Iraqi man feeds seagulls on a bridge across the Tigris River in central Baghdad on December 11, 2020. (Photo by Ahmad Al-Rubaye/AFP Photo) 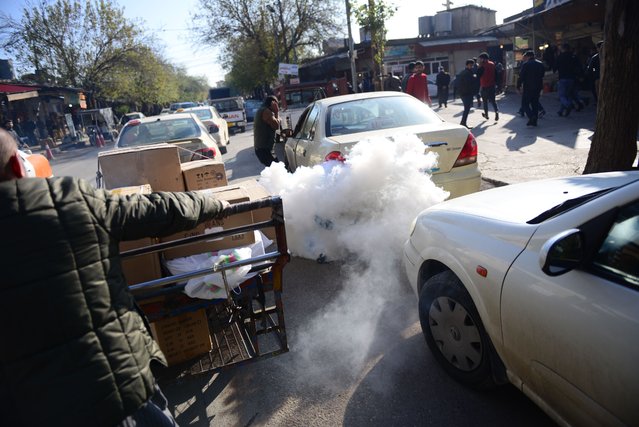 People are affected from tear gas thrown by security forces during a protest against salary delays at Mevlevi street in Sulaymaniyah, Iraq on December 03, 2020. (Photo by Fariq Faraj Mahmood/Anadolu Agency via Getty Images) 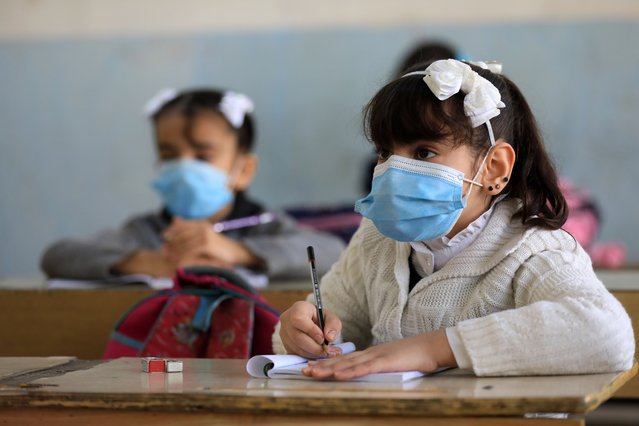 Students wear masks as a measure taken against coronavirus (Covid-19) pandemic attend the lesson at a school in Baghdad, Iraq on December 6, 2020. (Photo by Murtadha Al-Sudani/Anadolu Agency via Getty Images) 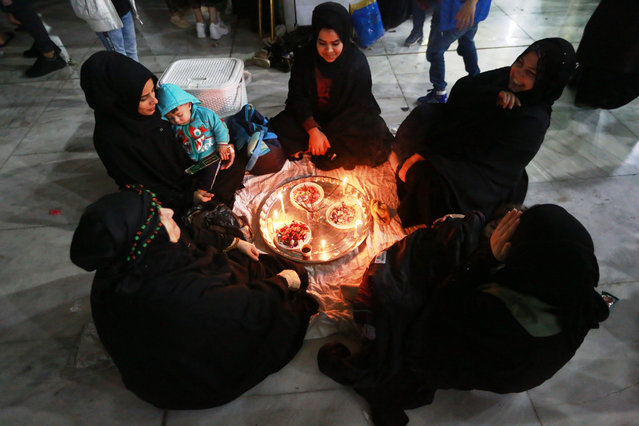 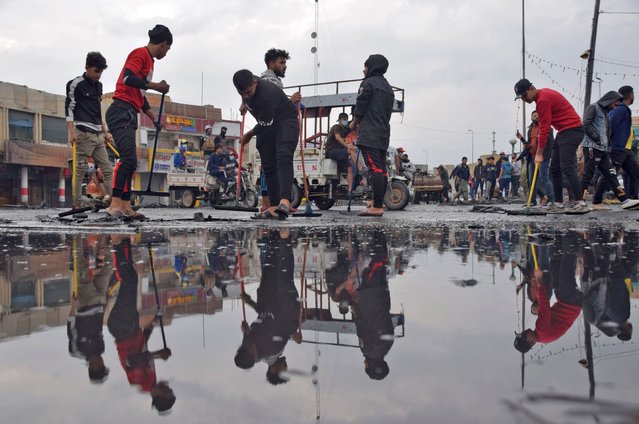 This picture taken on November 28, 2020 shows a view of people cleaning up at a protest site in Habboubi Square in Iraq's southern city of Nasiriyah. Anti-government protesters defied lockdowns and the threat of violence to demonstrate on November 28 in several Iraqi cities. In the southern hotspot of Nasiriyah, anti-government activists accused supporters of populist Shiite cleric Moqtada Sadr of shooting at them and torching their tents in their main gathering place of Habboubi Square late the day before. Nasiriyah was a major hub for the protest movement that erupted last year against a government seen by demonstrators as corrupt, inept and beholden to neighbouring Iran. (Photo by Asaad Niazi/AFP Photo) 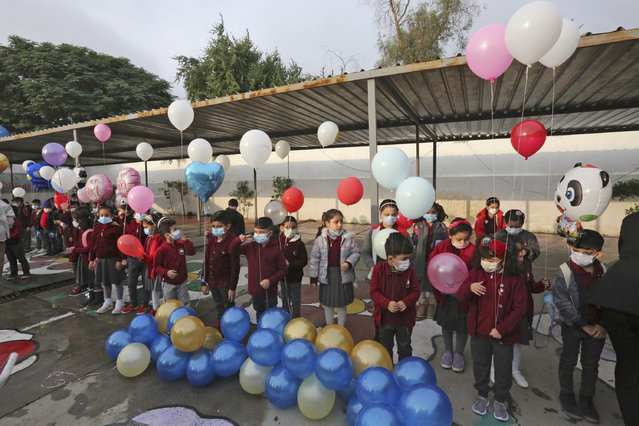 Iraqi pupils wearing protective masks hold balloons in their school yard on the first day of the new academic year, at Hariri primary school in the capital Baghdad, on November 29, 2020, amid the COVID-19 pandemic. Iraq's schools began a new academic year, after weeks of delay due to the coronavirus pandemic. Children will attend class in person once a week on rotating shifts, and will take online (distant learning) courses the rest of the week. (Photo by Sabah Arar/AFP Photo) 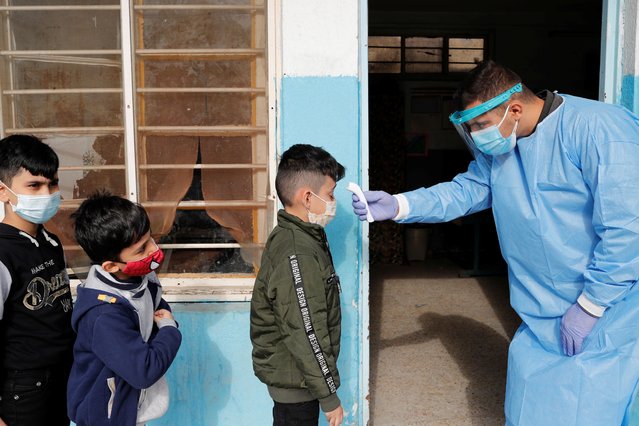 A medical team member wearing a protective suit checks a student's temperature during testing for the coronavirus disease (COVID-19) at a school in Baghdad, Iraq on December 14, 2020. (Photo by Thaier al-Sudani/Reuters) 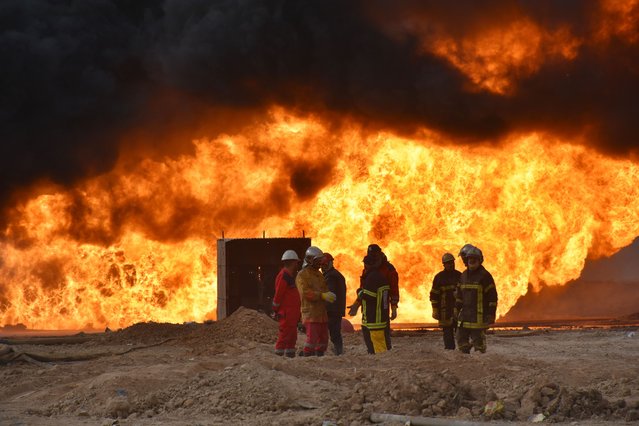 Firefighter teams conduct extinguish works after the Daesh carried out a bomb attack on wells in the Habbaza oil field in the Kirkuk province of Iraq on December 15, 2020. (Photo by Ali Makram Ghareeb/Anadolu Agency via Getty Images) 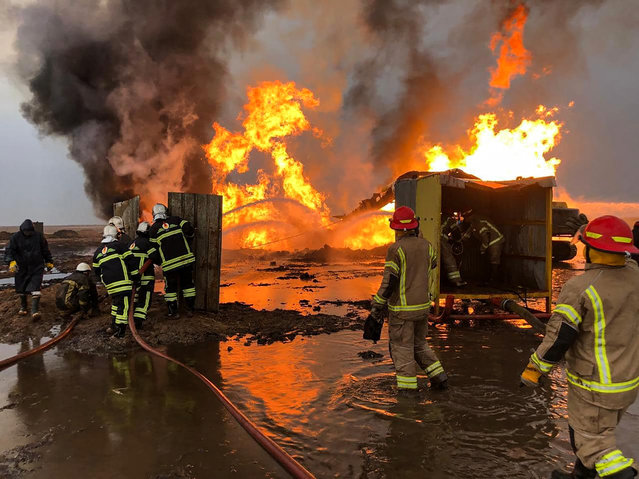 Firefighters from the Iraqi state-owned North Oil Company put out a fire at an oil well in the northern Khabbaz oil field, about 20 kilometres (12 miles) southwest of Kirkuk in northern Iraq on December 16, 2020. Iraqi authorities had blamed the Islamic State group (IS) for the fires which had been raging for a week. IS has previously set oil fields aflame in Iraq. (Photo by Marwan Ibrahim/AFP Photo) 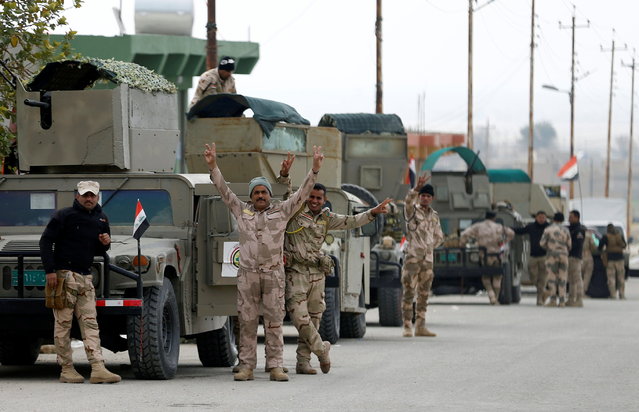 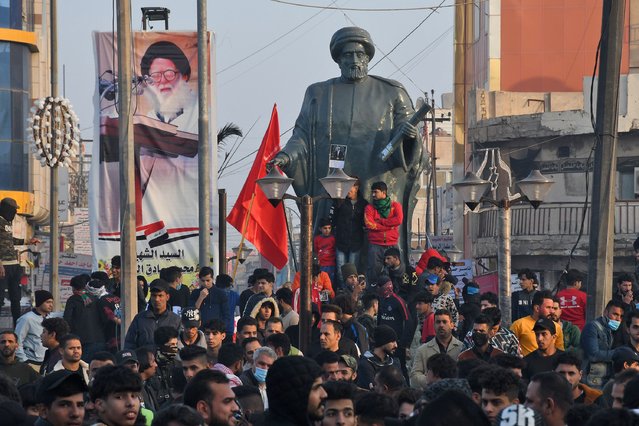 Iraqi protesters gather at al-Habboubi square in the southern city of Nasiriyah in Dhi Qar province on December 18, 2020, to demand their legitimate rights and accountability for killings. (Photo by Asaad Niazi/AFP Photo) 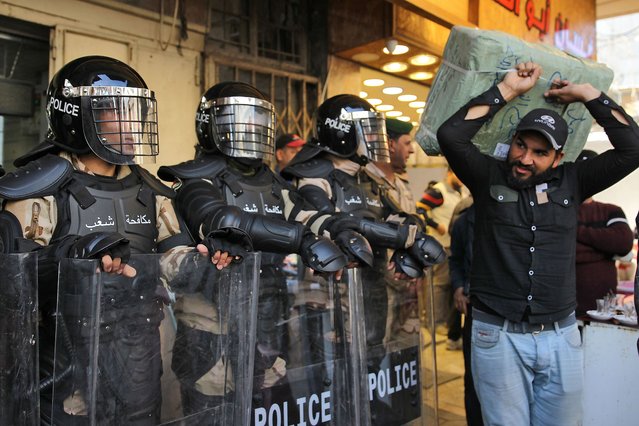 A man carrying a package walks past Iraqi riot police security forces standing guard outside the Central Bank of Iraq headquarters along Rashid Street in the centre of the capital Baghdad on December 22, 2020. Hundreds of angry Iraqis protest in several cities against a currency devaluation that has slashed their purchasing power amid a pandemic-fuelled economic crisis. The Central Bank of Iraq (CBI) at the weekend devalued the currency by over a fifth against the US dollar, officially re-pegging the dinar at a bank rate of 1,460 to the greenback. (Photo by Ahmad Al-Rubaye/AFP Photo) 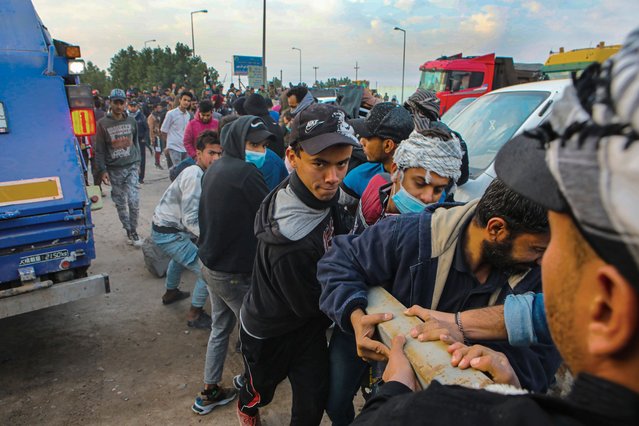 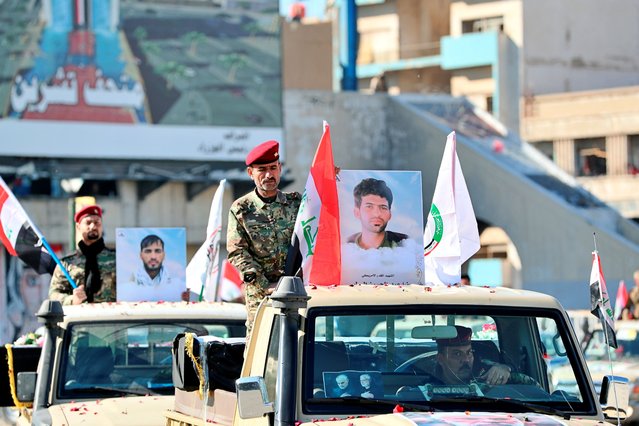 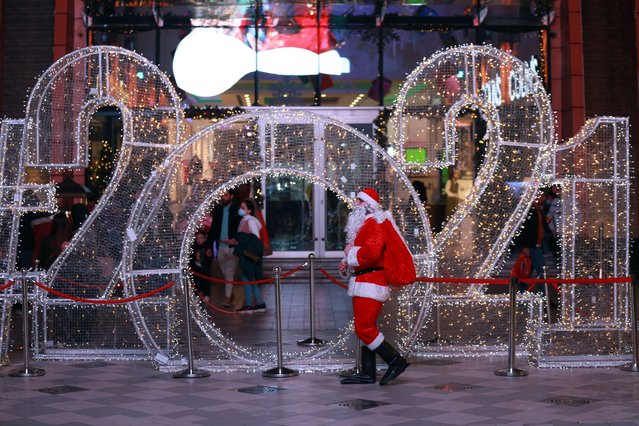 A man dressed up as Santa Claus is seen as distributes gifts to children within the new year celebration preparations in Baghdad, Iraq on December 29, 2020. (Photo by Murtadha Al-Sudani/Anadolu Agency via Getty Images) 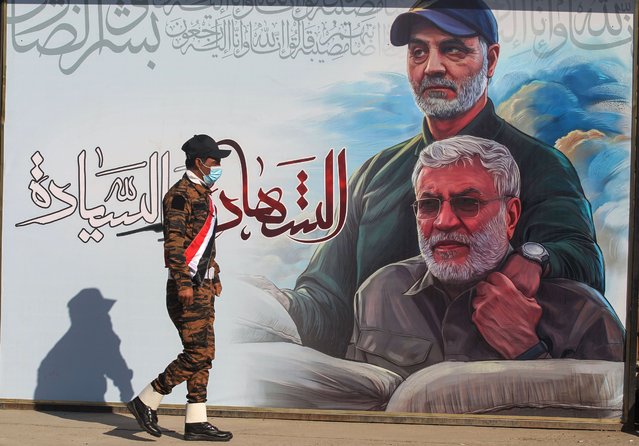 An Iraqi fighter of the Hashed al Shaabi (Popular Mobilisation) paramilitary units walks past a poster depicting late Iraqi commander Abu Mahdi al-Muhandis (R) and Iranian Revolutionary Guards commander Qasem Soleimani, in the capital Baghdad on December 30, 2020, ahead of the first anniversary of their killing in a US drone attack. On January 3, Iraq will mark a year since a US drone strike killed al-Muhandis, the deputy head of Iraq's powerful Tehran-aligned Hashed Al-Shaabi paramilitary network, alongside Soleimani, head of the elite external operations of Iran's Revolutionary Guards, nearly sparking a conflict that many fear could still ignite. (Photo by Ahmad Al-Rubaye/AFP Photo) 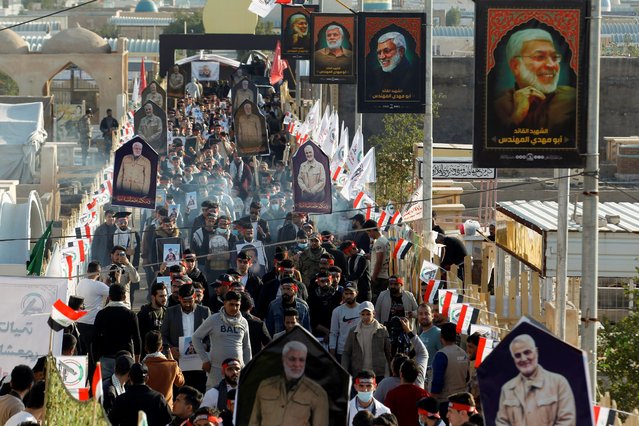 Iraqi students gather to mark the one year anniversary of the killing of senior Iranian military commander General Qassem Soleimani and Iraqi militia commander Abu Mahdi al-Muhandis in a U.S. attack, at the Wadi al-Salam cemetery, in Najaf, Iraq on January 1, 2021. (Photo by Alaa Al-Marjani/Reuters) 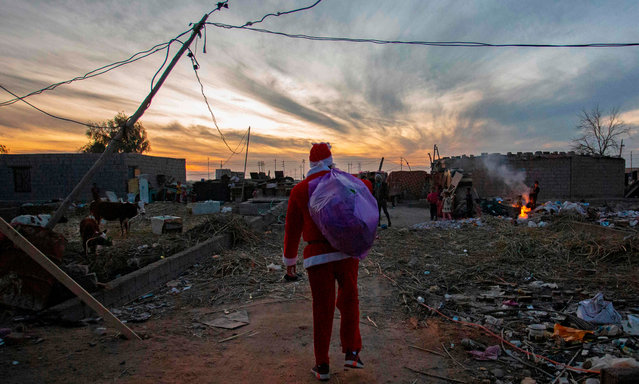