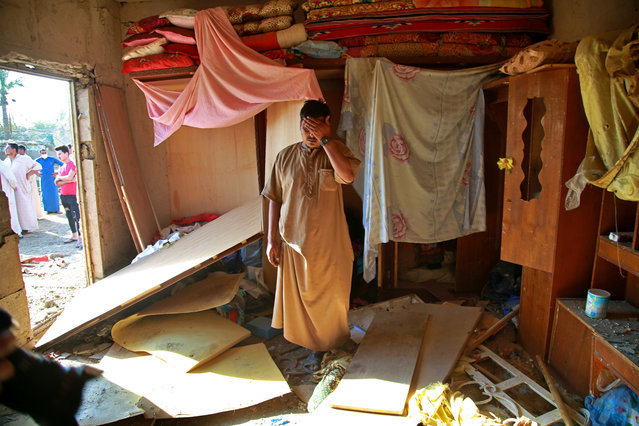 A man inspects the aftermath of a deadly Katyusha rocket attack inside his home near the international airport in Baghdad, Iraq, Tuesday, September 29, 2020. Several Iraqi civilians were killed and two severely wounded Monday after the Katyusha rocket hit near Baghdad airport, Iraq military said. It was the first time in months an attack caused civilian casualties. (Photo by Khalid Mohammed/AP Photo) 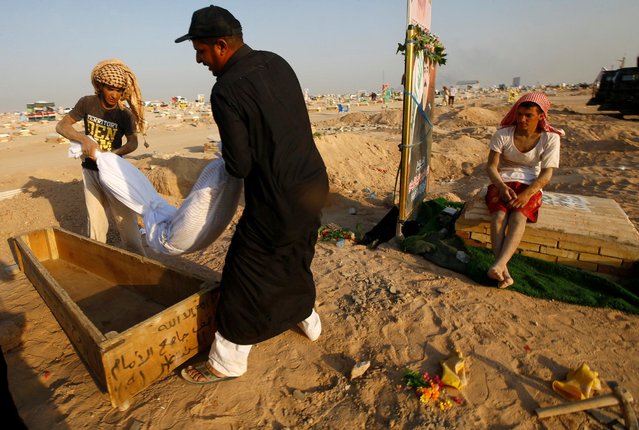 Iraqi men carry the corpse of a man who, according to his relatives, died of the coronavirus, after they dug it up to be transferred to the “Valley of Peace” cemetery on the outskirts of the holy city of Najaf, Iraq on September 12, 2020. (Photo by Alaa Al-Marjani/Reuters) 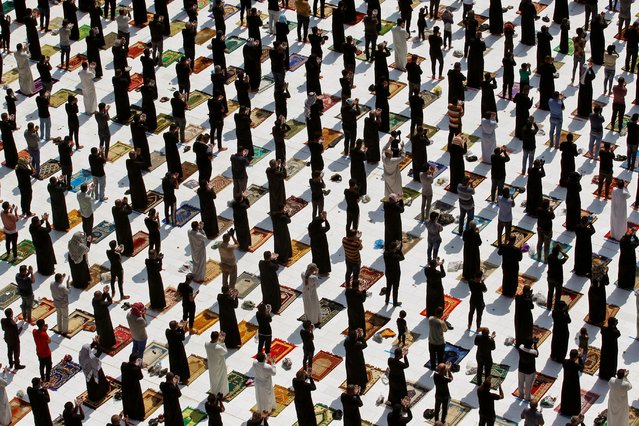 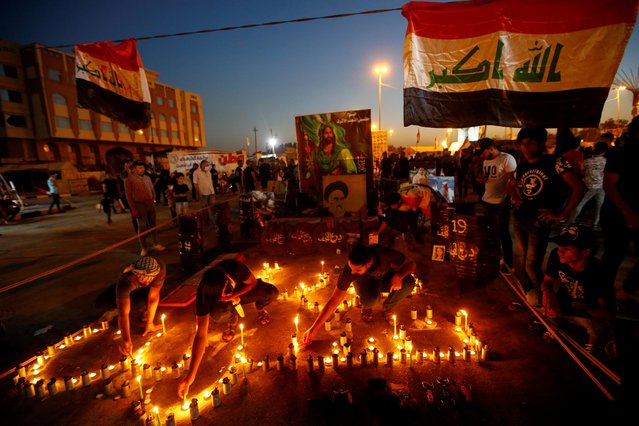 Men light candles as Iraqi demonstrators gather to mark the first anniversary of the anti-government protests, in Najaf, Iraq on October 1, 2020. (Photo by Alaa Al-Marjani/Reuters) 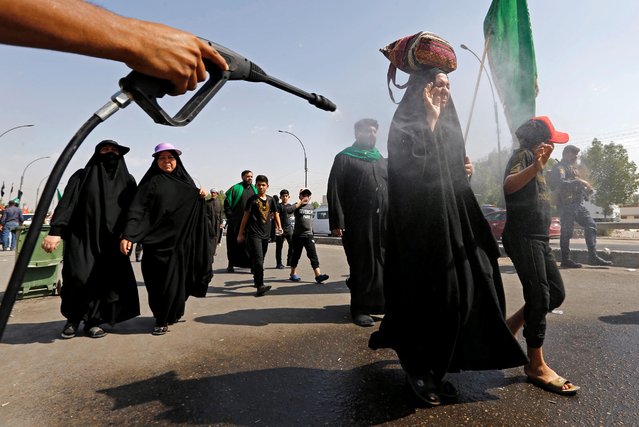 Iraqi Shi'ite Muslim pilgrims are sprayed with water to cool them as they make their way to the holy city of Kerbala, ahead of the holy Shi'ite ritual of Arbaeen, amid the outbreak of the coronavirus disease (COVID-19), in Baghdad, Iraq on October 5, 2020. (Photo by Thaier Al-Sudani/Reuters) 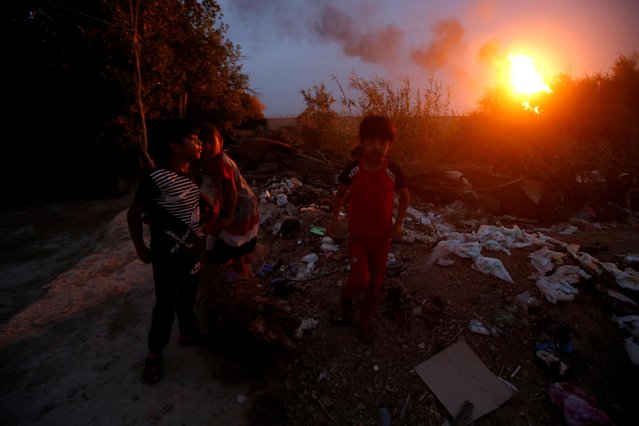 Children play with flames rising from oil refinery pipes in the background in Basra, Iraq on July 23, 2020. (Photo by Essam al-Sudani/Reuters) 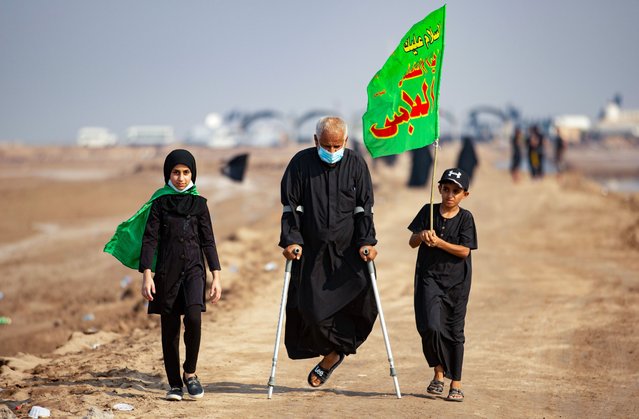 A disabled Iraqi Shiite Muslim man and children who began their march from the southern port city of al-Faw, walk through Basra on their way to the holy city of Karbala, ahead of the Arbaeen religious festival, on September 17, 2020. Each year, pilgrims converge in large numbers to the holy Iraqi cities of Najaf and Karbala ahead of Arbaeen, which marks the 40th day after Ashura, commemorating the seventh century killing of Prophet Mohammed's grandson Imam Hussein This year however, the Iraqi authorities prevented foreign visitors from entering Iraq to participate, due to the novel coronavirus crisis. (Photo by Hussein Faleh/AFP Photo) 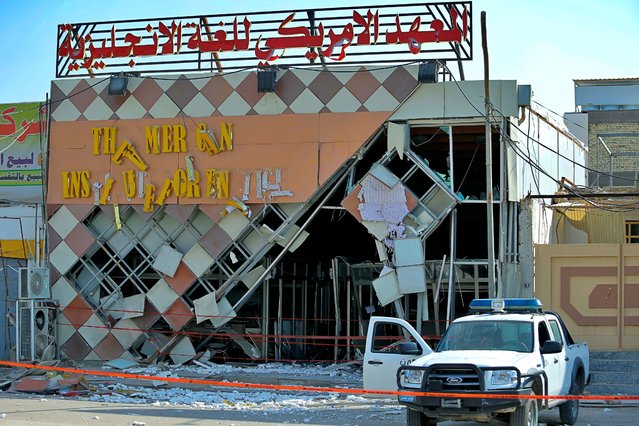 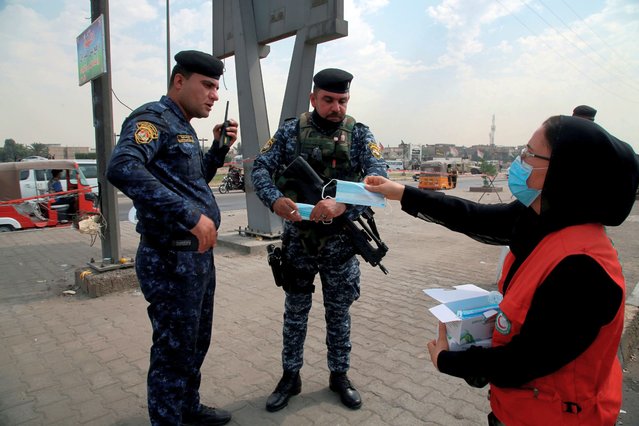 A health worker distributes face masks to security forces as a precaution against the coronavirus while Shiite pilgrims march to Karbala for the Arbaeen ritual in Baghdad, Iraq, Sunday, October 4, 2020. The holiday marks the end of the forty day mourning period after the anniversary of the martyrdom of Imam Hussein, the Prophet Muhammad's grandson in the 7th century. (Photo by Khalid Mohammed/AP Photo) 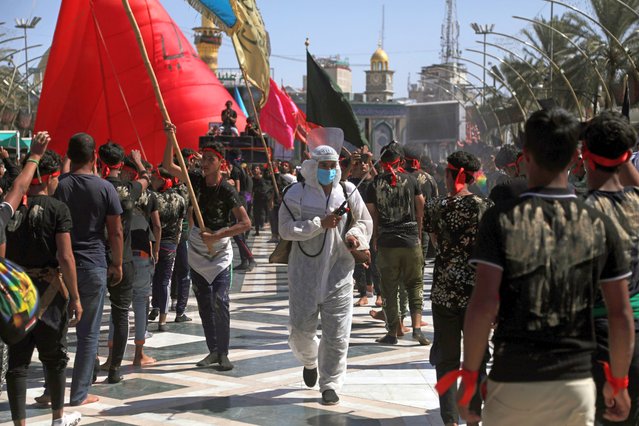 A man sprinkles disinfectant over Shi'ite Muslim pilgrims as they gather, ahead of the holy Shi'ite ritual of Arbaeen, amid the outbreak of the coronavirus disease (COVID-19), in Kerbala, Iraq, October 7, 2020. (Photo by Abdullah Dhiaa Al-Deen/Reuters) 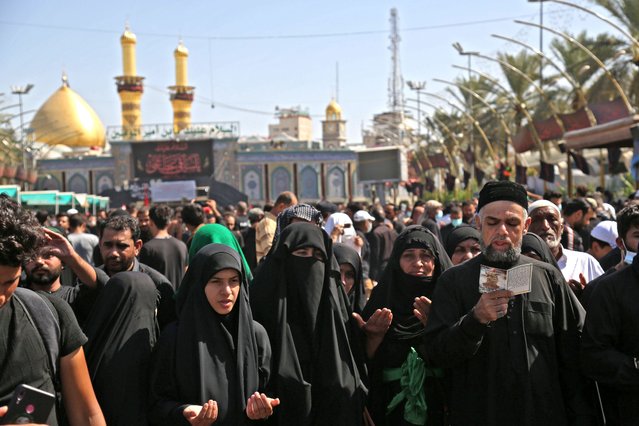 Shiite Muslims take part in a mourning ritual in Iraq's central holy city of Karbala, on October 8, 2020, a day ahead of Arbaeen, which marks the end of the 40-day mourning period for the seventh century killing of Imam Hussein, Prophet Mohammed's grandson. (Photo by Mohammed Sawaf/AFP Photo) 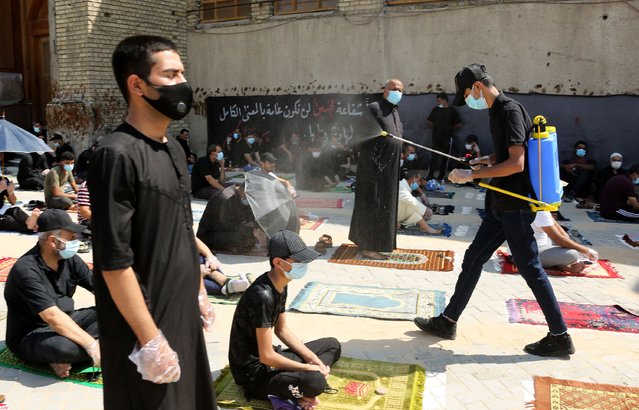 A medical personnel sprays disinfectant as Iraqi Shiite worshipers perform their Friday Prayers amid the spread of COVID-19 in Sadr City, the Shiite stronghold of northeastern Baghdad, Iraq, 25 September 2020. Iraqi authorities have now allowed the reopening of mosques, restaurants, cafes, parks, malls and canceled the overnight curfews, as the country eases the restrictions it had imposed in a bid to stem the spread of the ongoing pandemic of the COVID-19 disease caused by the SARS-CoV-2 coronavirus. (Photo by Ahmed Jalil/EPA/EFE/Rex Features/Shutterstock) 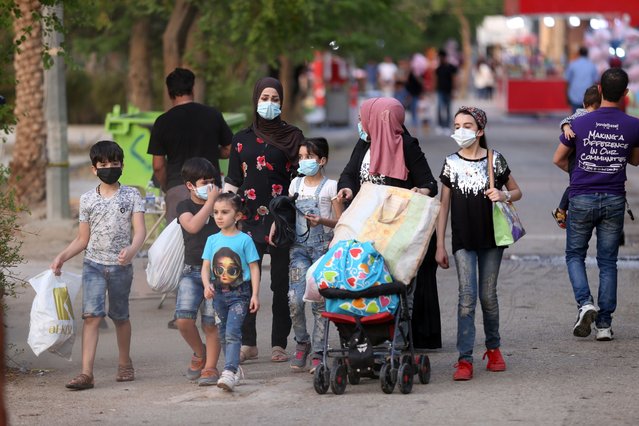 Citizens are seen at a park after parks re-opened to visitors following the closure as part of the easing restrictions within the novel coronavirus (COVID-19) pandemic in Bagdad, Iraq on September 26, 2020. (Photo by Murtadha Al-Sudani/Anadolu Agency via Getty Images) 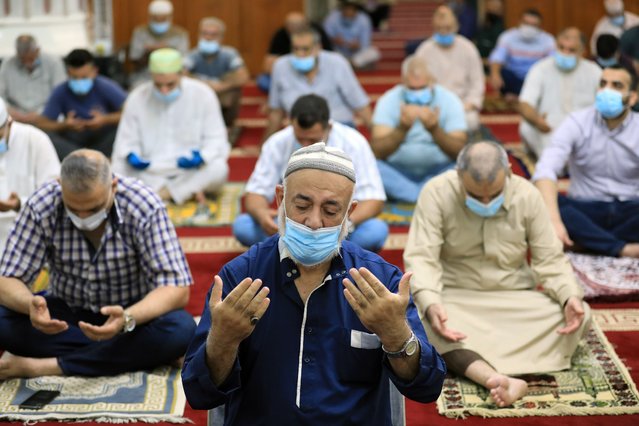 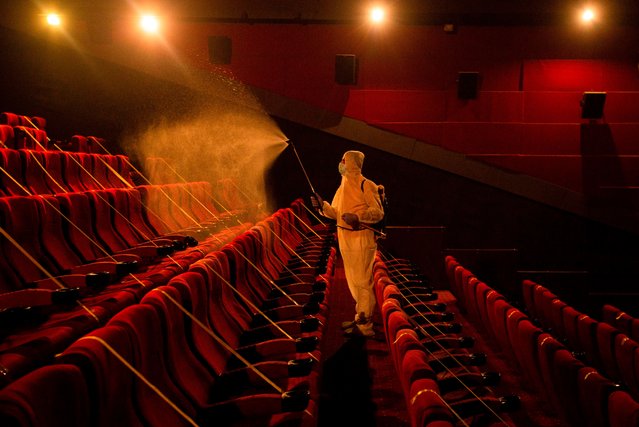 A worker disinfects a movie theatre before its reopening to the public in the southern Iraqi city of Basra on October 14, 2020, following an easing of restrictions imposed by the authorities in a bid to stem the spread of the novel coronavirus. (Photo by Hussein Faleh/AFP Photo) 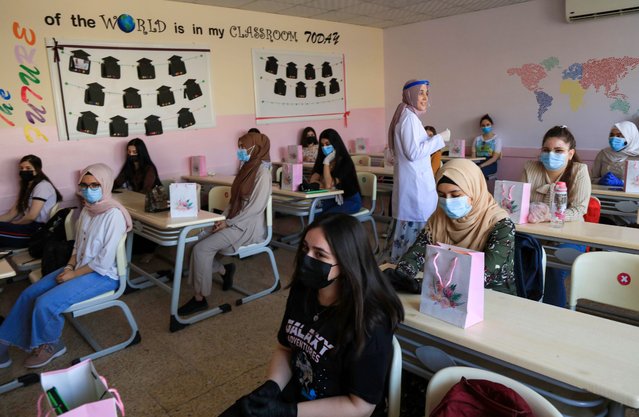 Iraqi Kurdish students, wearing a protective mask due to the Coronavirus pandemic, attend the first day of the new school year in Arbil the capital of the northern Iraqi Kurdish autonomous region, on September 27, 2020. (Photo by Safin Hamed/AFP Photo) 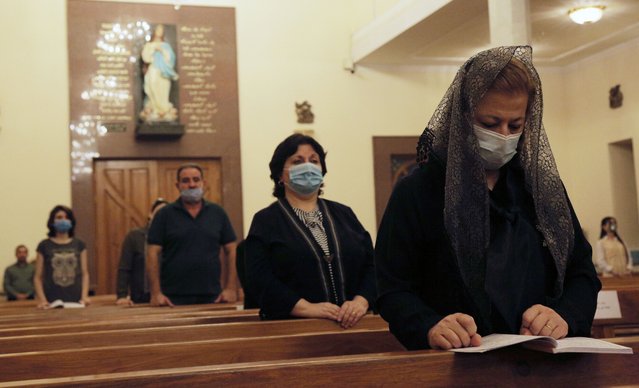 Christians attend a Sunday service in one of the Chaldean churches that reopened after months of closure due to the coronavirus disease (COVID-19) outbreak, in Baghdad, Iraq on October 11, 2020. (Photo by Teba Sadiq/Reuters) 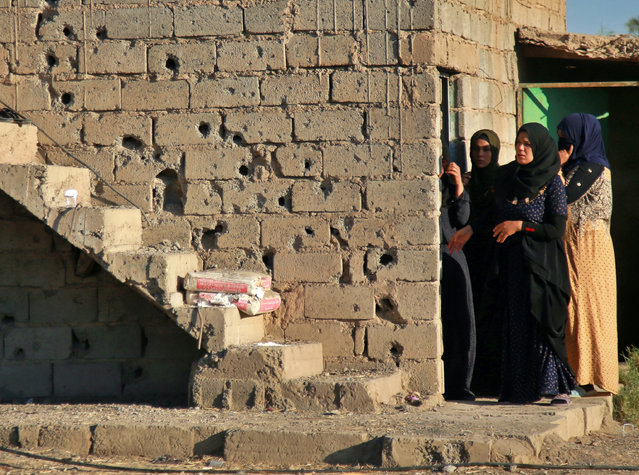 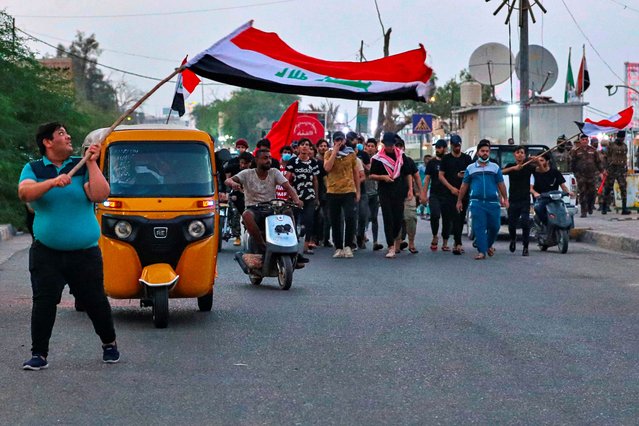 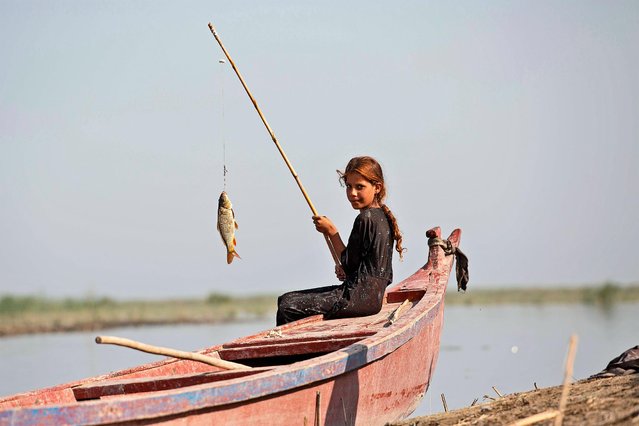 A girl catches a fish in the marshes of the southern district of Chibayish in Dhi Qar province, about 120 kilometres northwest of the southern city of Basra, on September 23, 2020. Iraq's southern marshes are blossoming thanks to a wave of ecotourists picnicking and paddling down their replenished river bends. (Photo by Hussein Faleh/AFP Photo)
Edit Del
18 Oct 2020 00:01:00, post received 0 comments
Publication archive:
←   →
Popular tags:
All tags
Last searches: