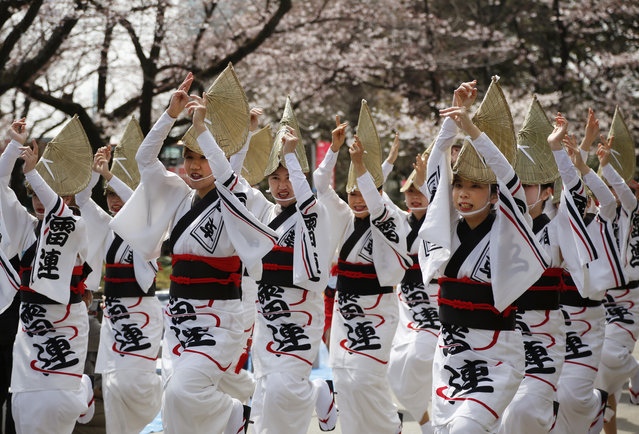 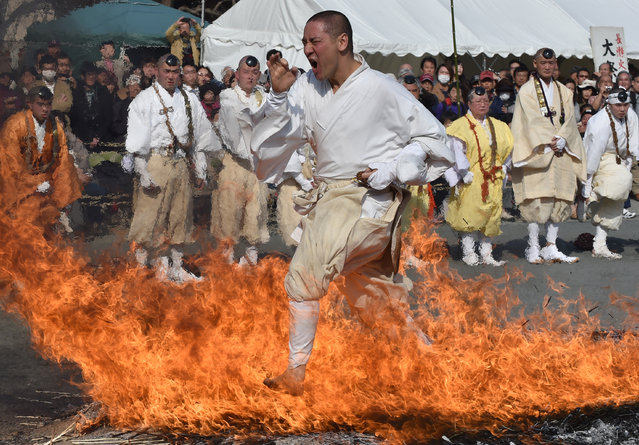 A Buddhist devotee dashes barefoot through flames during the Nagatoro Hi-Matsuri, or fire-walking festival, to herald the coming of spring at the Fudoji temple in Nagatoro town, Saitama prefecture on March 5, 2017. Hundreds of people following Buddhist ascetics participated in the fire-walking festival to “purify the mind and body” and to pray for good health and safety. (Photo by Kazuhiro Nogi/AFP Photo) 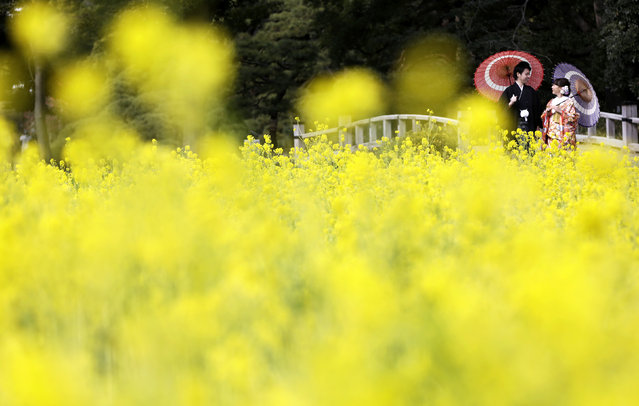 A couple wearing Japanese traditional kimono pose for a wedding photo by a rapeseed oil field at Hamarikyu Garden in Tokyo, Friday, February 10, 2017. The flowers are expected to remain in full bloom until the end of March. (Photo by Eugene Hoshiko/AP Photo) 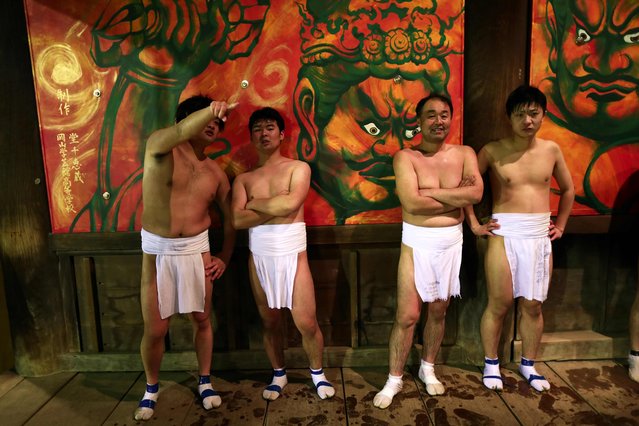 In this picture taken on February 18, 2017, worshippers stand at Saidaiji Temple as they attend the annual Naked Man Festival or “Hadaka Matsuri” in Okayama, western Japan With only a skimpy loincloth to protect their modesty, thousands of men brave freezing temperatures to fight for lucky charms thrown by a priest at Japan' s annual Naked Man Festival. (Photo by Behrouz Mehri/AFP Photo) 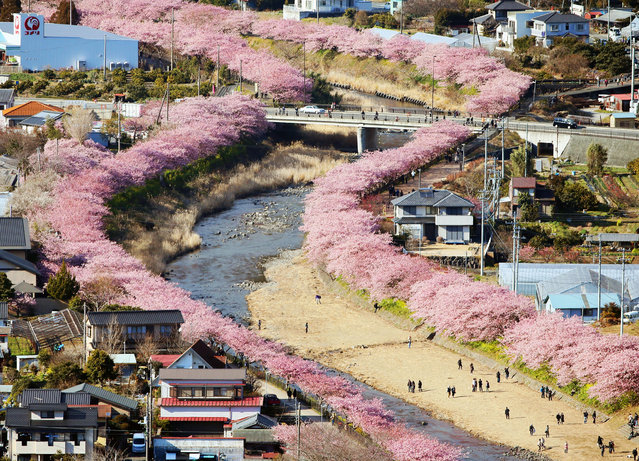 People enjoy walking along a row of cherry blossom trees, as seen in photo taken from a Kyodo News helicopter, in the central Japan town of Kawazu on February 15, 2017. The good time to view the early flowering blossoms will continue through early March. (Photo by Kyodo News via Getty Images) 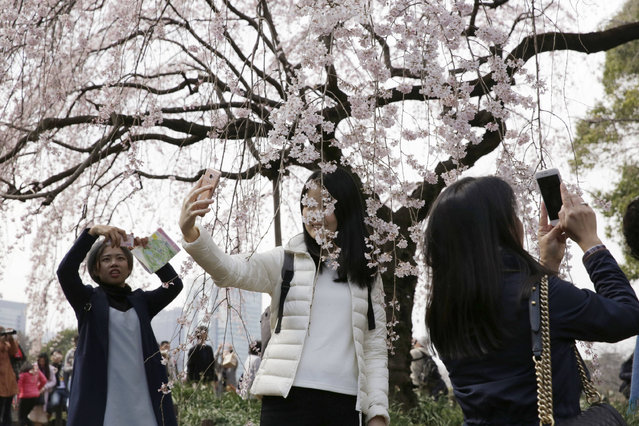 Visitors take pictures of blooming cherry blossoms at a park in Tokyo, Tuesday, March 28, 2017. Cherry blossom season has officially kicked off in Tokyo, marking the beginning of spring for the Japanese. (Photo by Eugene Hoshiko/AP Photo) 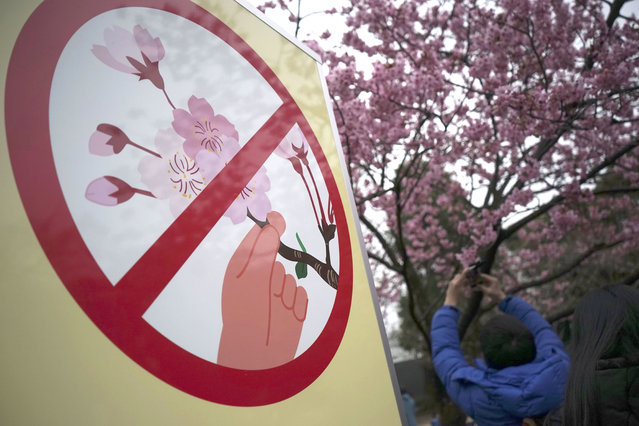 A visitor takes a picture of blooming cherry blossoms next to a “Hands off blooming cherry” sign at Ueno Park in Tokyo, Friday, March 31, 2017. (Photo by Eugene Hoshiko/AP Photo) 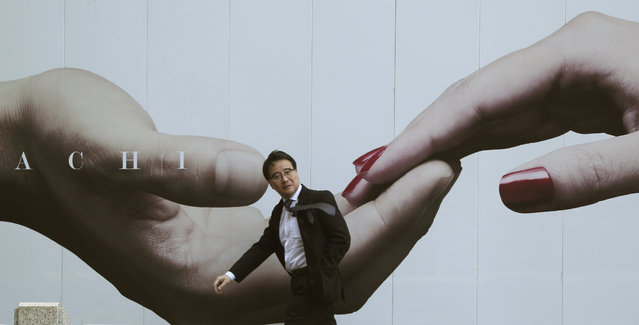 In this Friday, March 17, 2017 photo, a man looks back as he walks by a safety wall at a building construction site in Tokyo's Otemachi business district. Otemachi, historically derived from the place where the main gate to the Edo Castle, currently the Imperial Palace, was located, literally means “a town of big hands”. (Photo by Koji Sasahara/AP Photo) 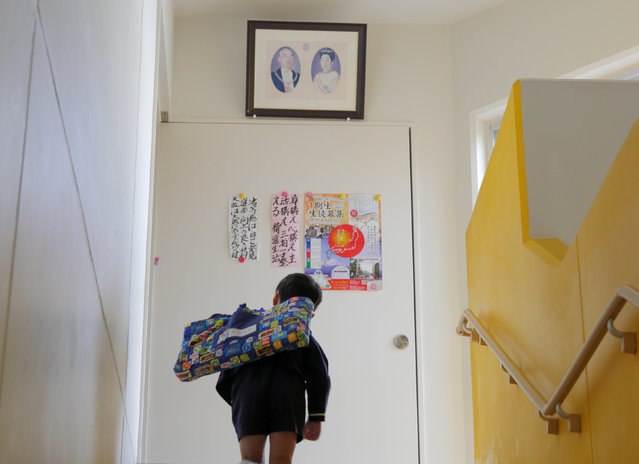 A student stops to bow to a portrait of Japanese former Emperor Hirohito and Empress Kojun at Tsukamoto kindergarten in Osaka, Japan, November 30, 2016. (Photo by Ha Kwiyeon/Reuters) 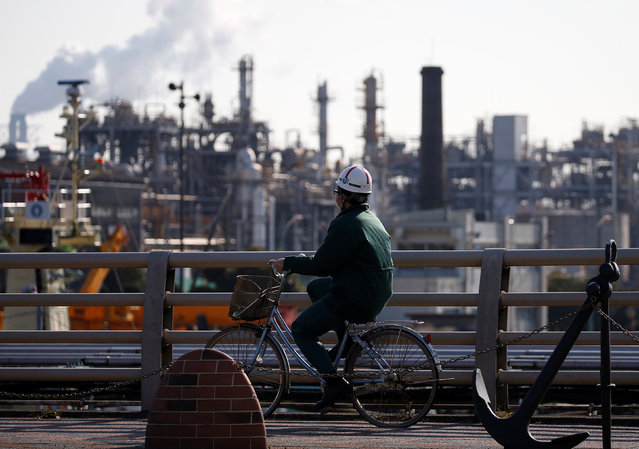 A worker cycles near a factory at the Keihin industrial zone in Kawasaki, Japan February 28, 2017. (Photo by Issei Kato/Reuters) 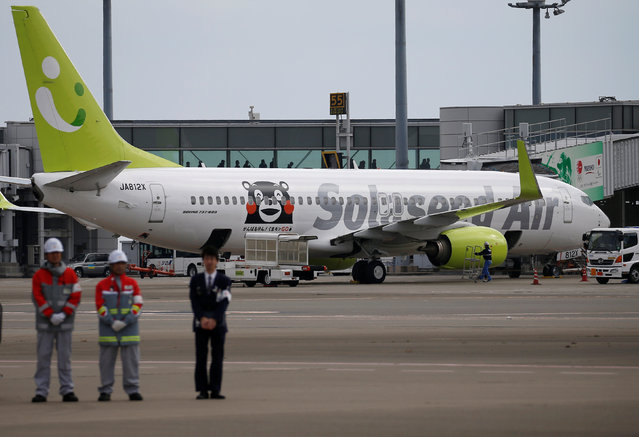 An airplane of Solaseed Air is seen at Haneda airport in Tokyo, Japan February 28, 2017. (Photo by Issei Kato/Reuters) 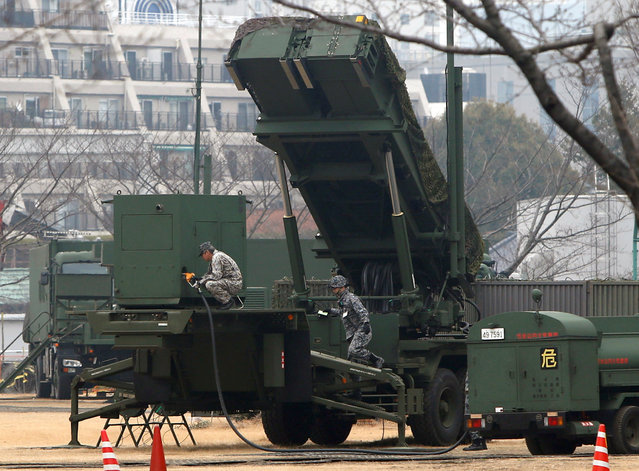 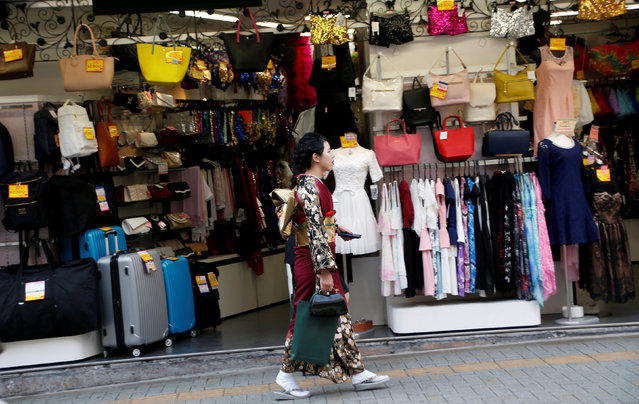 A woman in a kimono walks past a shop in a shopping district in Tokyo, Japan March 23, 2017. (Photo by Kim Kyung-Hoon/Reuters) 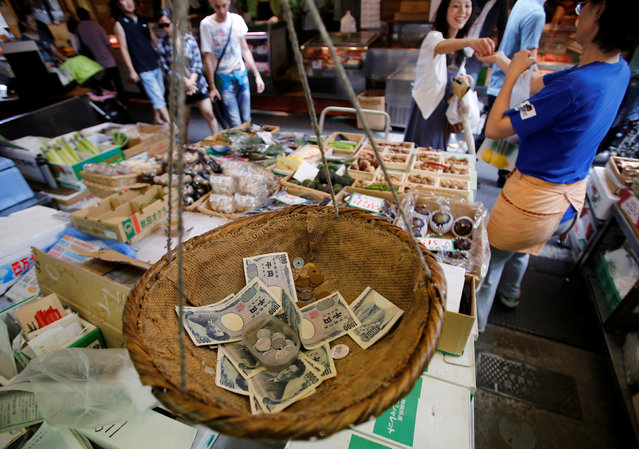 Coins and banknotes that are used for change are seen in a bamboo basket at a greengrocer in Tokyo, Japan on August 22, 2013. (Photo by Toru Hanai/Reuters) 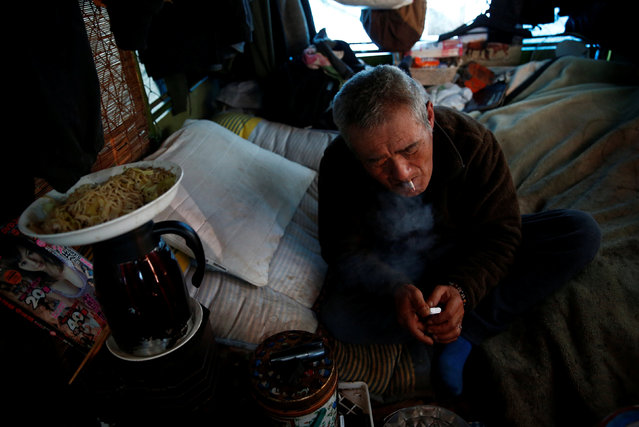 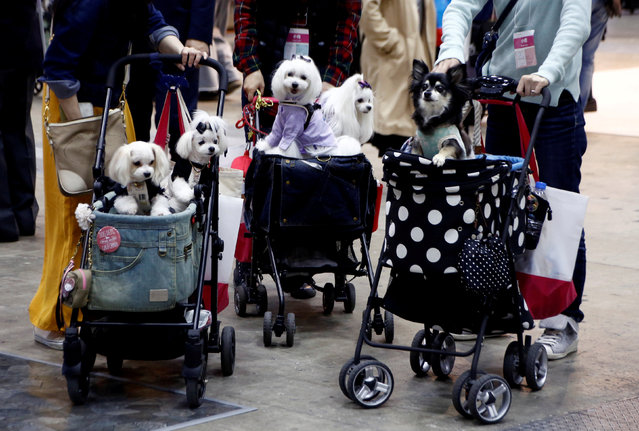 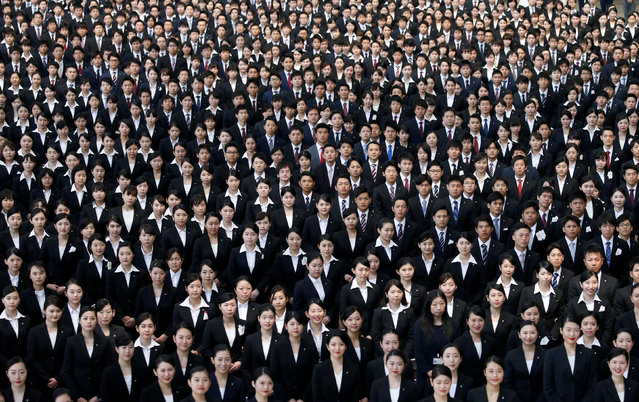 Newly-hired employees of Japan Airlines (JAL) group pose for photos during an initiation ceremony at a hangar of Haneda airport in Tokyo, Japan, April 3, 2017. (Photo by Toru Hanai/Reuters) 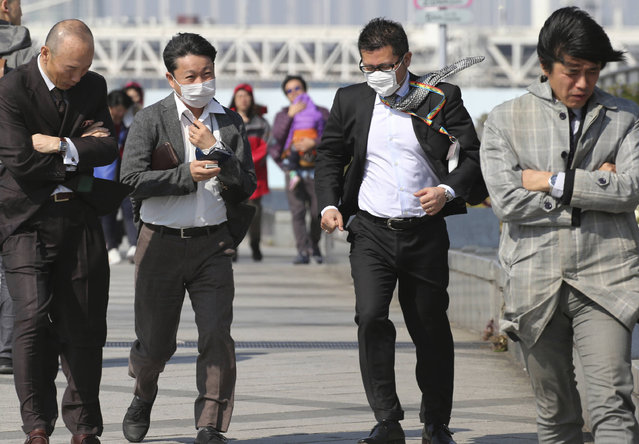 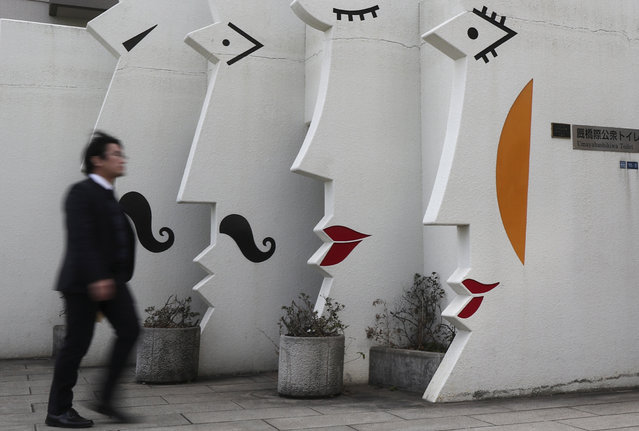 A man walks past a public restroom, featuring profiles of men and women, at Tokyo, Monday, February 20, 2017. (Photo by Shizuo Kambayashi/AP Photo) 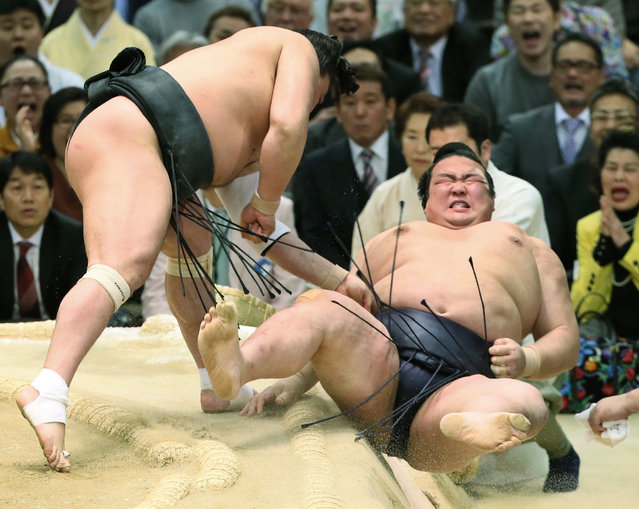 Japanese Yokozuna or sumo grand champion Kisenosato (R) is thrown out of the ring by Mongolian Yokozuna Harumafuji (L) at the Spring Grand Sumo Tournament in Osaka on March 24, 2017. (Photo by AFP Photo/JIJI Press) 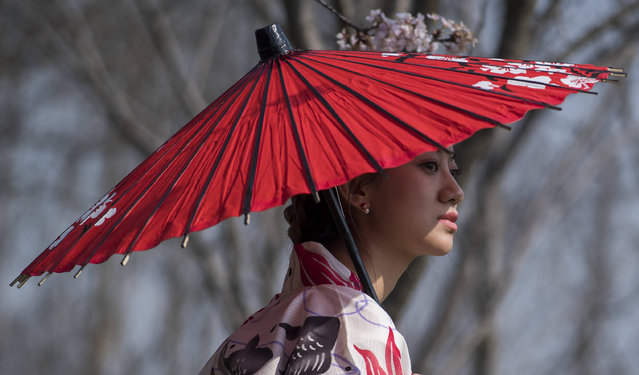 A girl, dressed up in a traditional dress, poses for photography enthusiasts next to a cherry blossom tree in the Gucun Park in Shanghai March 4, 2017. Every year the cherry blossoms in this park attract hundreds of thousands of visitors. The official Cherry Blossom Festival in the Gucun park starts end of March. (Photo by Johannes Eisele/AFP Photo) 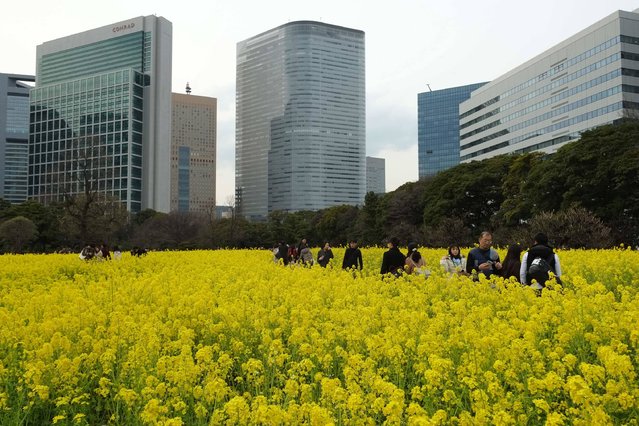 Visitors walk among rape blossoms in full bloom at Hama-rikyu Gardens in Tokyo on March 18, 2017. (Photo by Kazuhiro Nogi/AFP Photo) 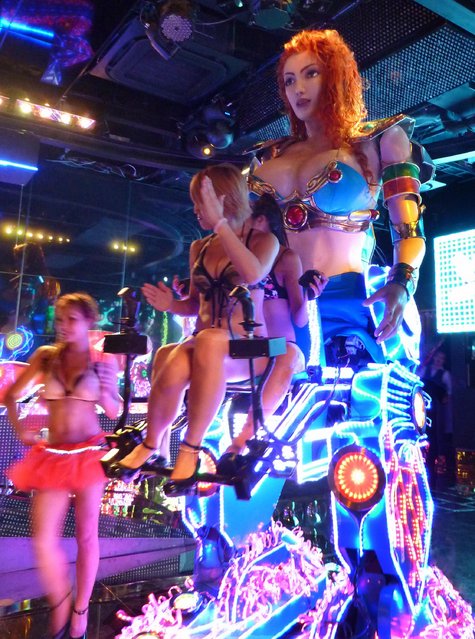 Girls operate a 3.6-meter-tall robot, the main feature of a show at the Robot Restaurant, an adult-oriented cabaret in Tokyo's Kabukicho night entertainment district, on September 12, 2012. (Photo by Kyodo News via Getty Images) 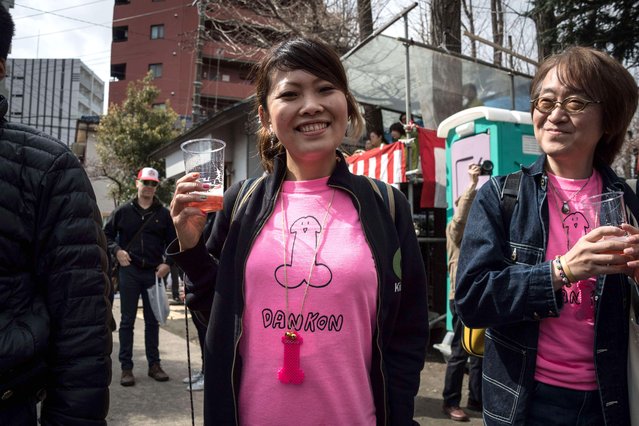 Festival goer with phallus logo t-shirt during the Kanamara Matsuri Steel Phallus Festival at Kawasaki, Japan on April 2, 2017. The Kanamara Matsuri or Festival of the Steel Phallus is held on the first Sunday of April at the Kanayama shrine. The shrine celebrates a legend of a steel pen*s and was frequented by prostitutes who wished to pray for protection from sexually transmitted diseases. Visitors now wish for easy delivery, marriage and matrimonial harmony. Because of the large steel phallus the unusual festival has become a tourist attraction attracting many overseas visitors and is used to raise money for HIV charities. Phallus shaped candy, carved vegetables, decorations, and a big parade are all part of the festival. (Photo by DELETREE/SIPA Press/Rex Features/Shutterstock) 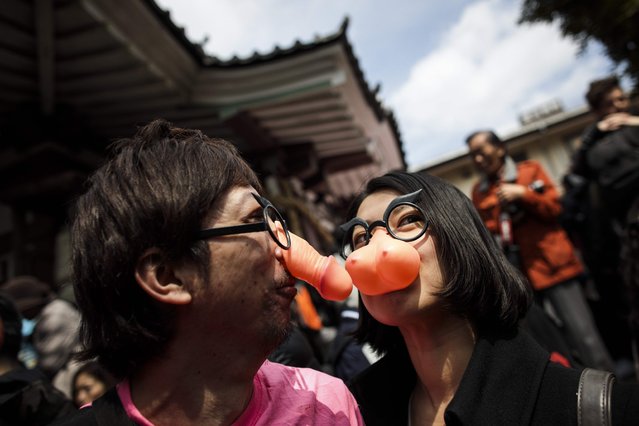 A couple wear plastic noses in the shape of a pen*s and breasts during the Kanamara Festival at Kanayama Shrine in Kawasaki on April 2, 2017. (Photo by Behrouz Mehri/AFP Photo) 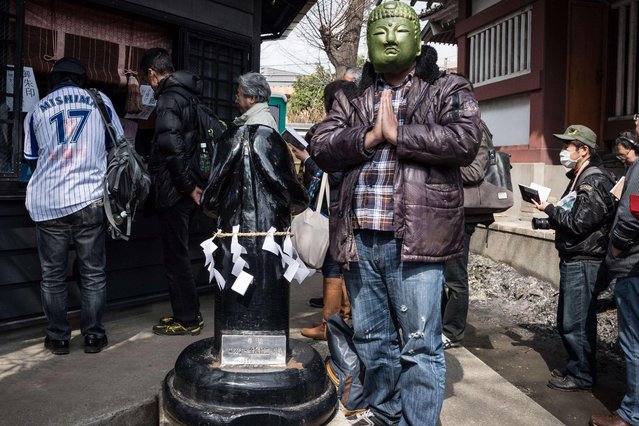 A participant prays near a giant phallus during the Kanamara Matsuri Steel Phallus Festival at Kawasaki, Japan on April 2, 2017. (Photo by DELETREE/SIPA Press/Rex Features/Shutterstock) 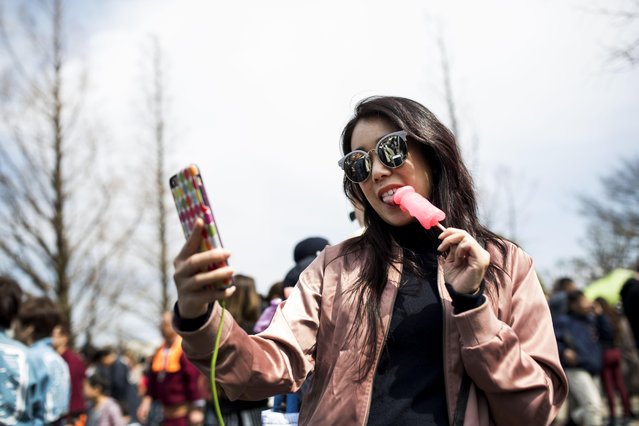 A woman takes a selfie as she holds candy in the shape of a phallus during the annual Kanamara Festival in Kawasaki on April 2, 2017. Japanese revellers carried giant phalluses through the streets of Kawasaki to worship the humble pen*s and fertility in one of the world' s most unusual festivals. Tens of thousands gather every spring for the festival, where they can buy keepsakes such as key chains, trinkets, pens, chocolates and even toy glasses with a plastic pen*s nose. (Photo by Behrouz Mehri/AFP Photo)
Edit Del
04 Apr 2017 09:48:00, post received 0 comments
Publication archive:
←   →
Popular tags:
All tags
Last searches: