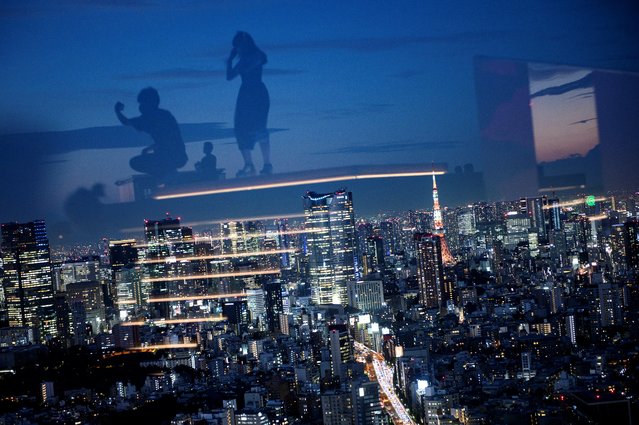 The Tokyo Tower (centre R) is illuminated amongst the city skyline as visitors are reflected in glass while visiting the Shibuya Sky observation deck in Tokyo on September 8, 2020. (Photo by Philip Fong/AFP Photo) 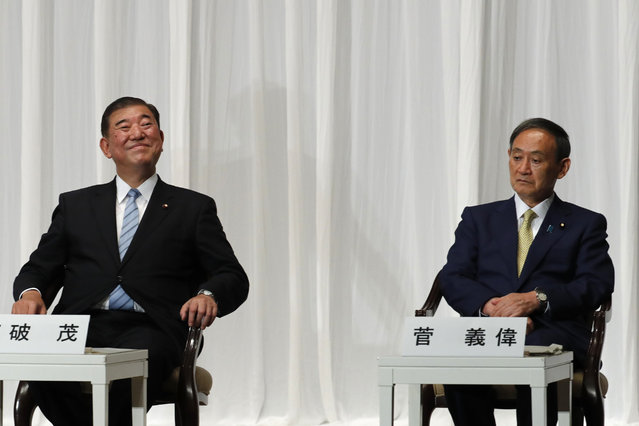 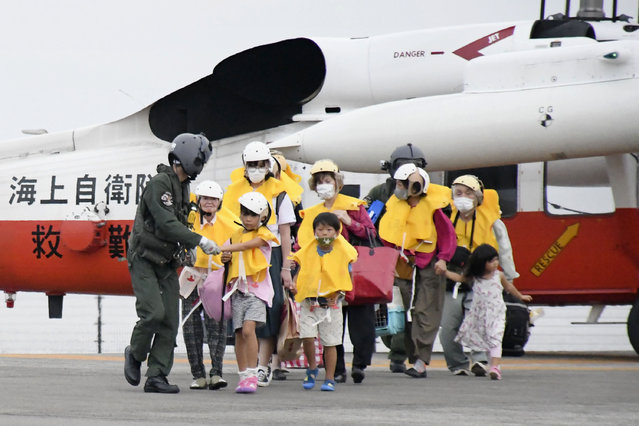 Residents of the islands arrive at a heliport in Kagoshima, southern Japan Friday, September 4, 2020 to take refuge ahead of a powerful typhoon. A powerful typhoon was barreling toward the southern cluster of Japanese Okinawa islands on Saturday, prompting warnings about torrential rainfall and fierce wind gusts. (Photo by Kyodo News via AP Photo) 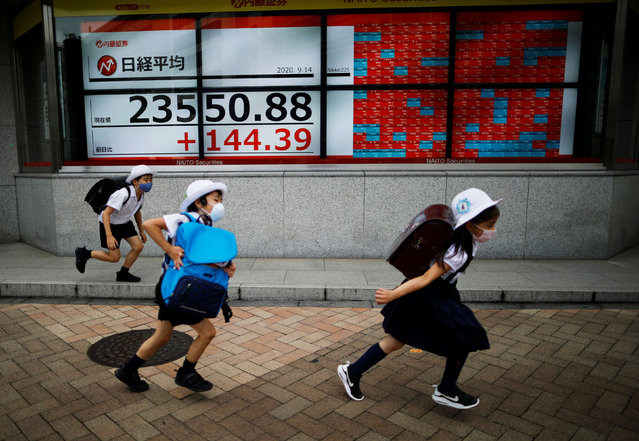 Passersby wearing protective masks run past an electronic board showing Japan's Nikkei average outside a brokerage, amid the coronavirus disease (COVID-19) outbreak, in Tokyo, Japan on September 14, 2020. (Photo by Issei Kato/Reuters) 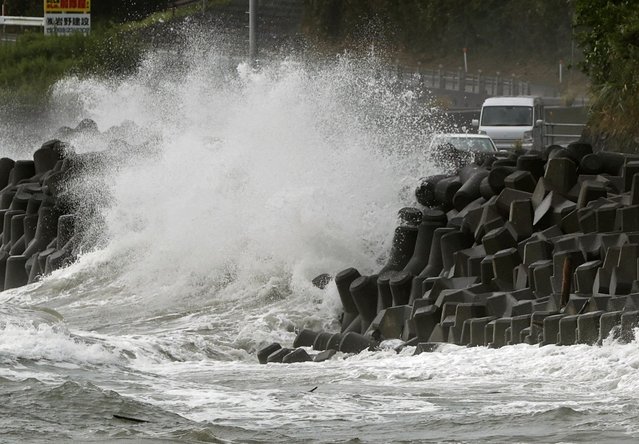 High waves pound the coast of the Kagoshima city, southwestern Japan Sunday, September 6, 2020. The second powerful typhoon to slam Japan in a week unleashed fierce winds and rain on southern islands on Sunday, blowing off rooftops and leaving homes without power as it edged northward into an area vulnerable to flooding and mudslides. (Photo by Takuto Kaneko/Kyodo News via AP Photo) 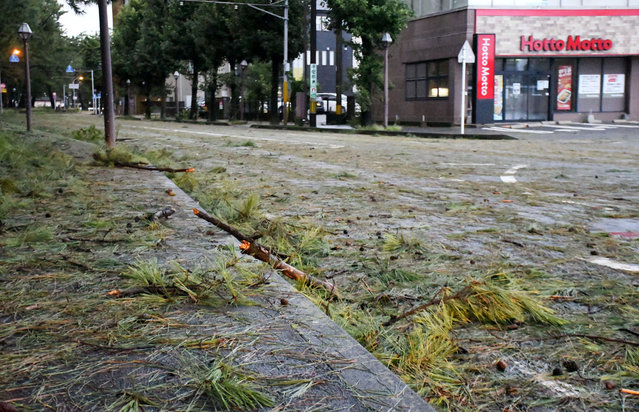 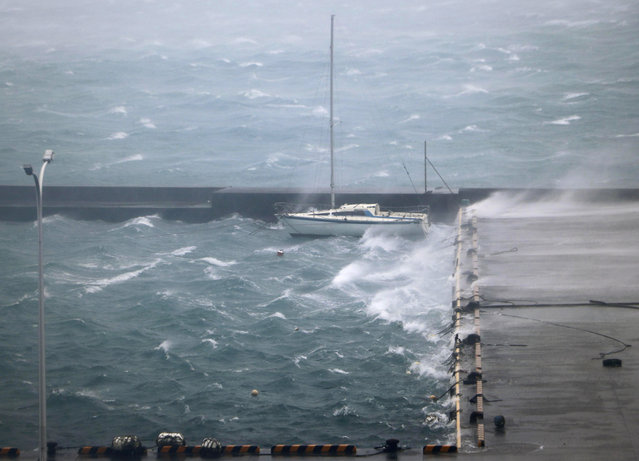 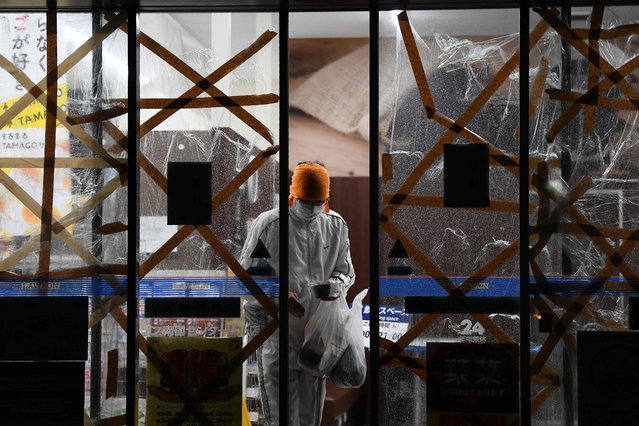 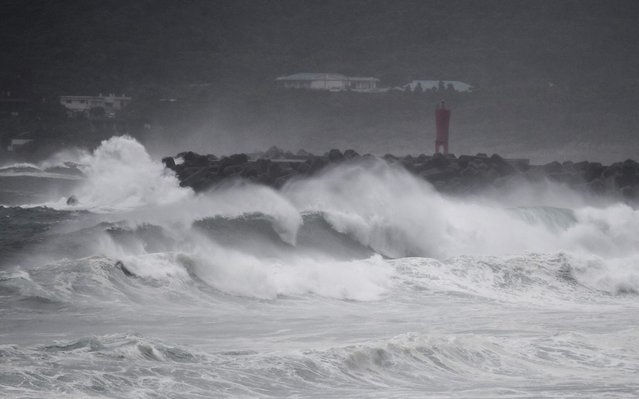 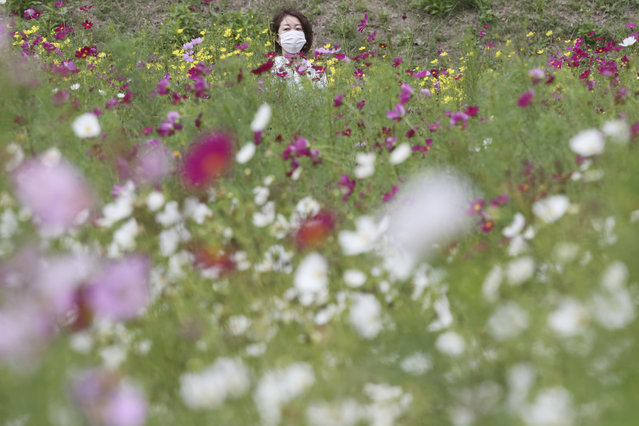 A visitor wearing a face mask to protect against the spread of the coronavirus strolls through cosmos fields at Kurihama Flower Park in Yokosuka, south of Tokyo, Tuesday, September 22, 2020. About 1 million cosmos are in full bloom. (Photo by Koji Sasahara/AP Photo) 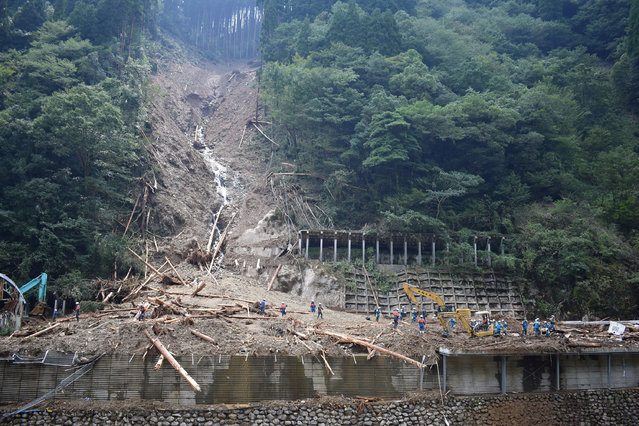 Police (in blue) conduct search and rescue operations at the site of a landslide in the village of Shiiba in Miyazaki Prefecture on September 8, 2020, after Typhoon Haishen grazed the southern Japanese island of Kyushu the day before. The powerful typhoon went on to lash South Korea on September 7 after smashing into southern Japan with record winds and heavy rains that left up to eight people dead or missing. (Photo by JIJI Press/AFP Photo) 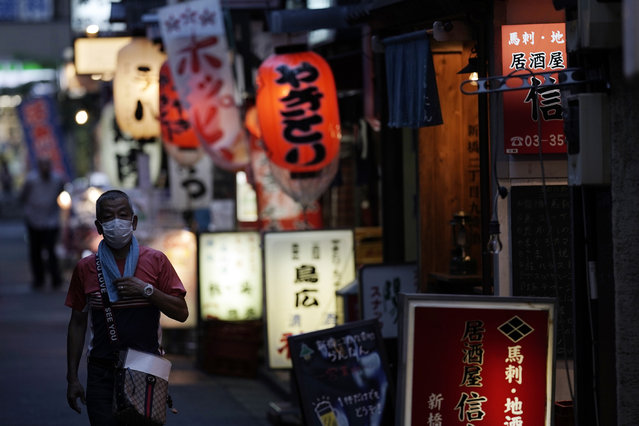 A man wearing a face mask to help curb the spread of the coronavirus walks down a bar street, Thursday, September 10, 2020, in Tokyo. The Japanese capital confirmed more than 270 coronavirus cases on Thursday. (Photo by Eugene Hoshiko/AP Photo) 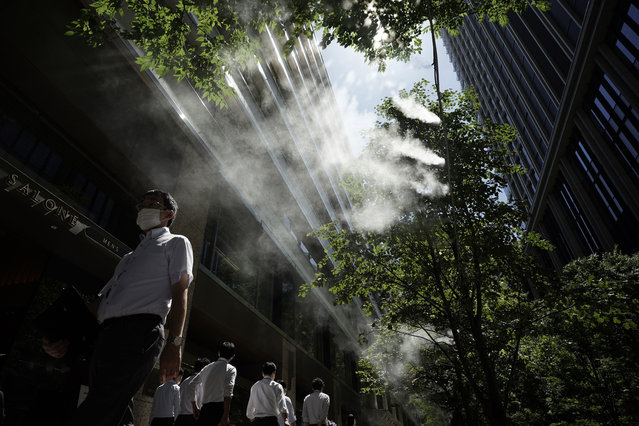 A man wearing a face mask to help curb the spread of the coronavirus walks under a cooling mist spot at a street Friday, September 4, 2020, in Tokyo. The Japanese capital confirmed more than 130 coronavirus cases on Friday. (Photo by ugene Hoshiko/AP Photo) 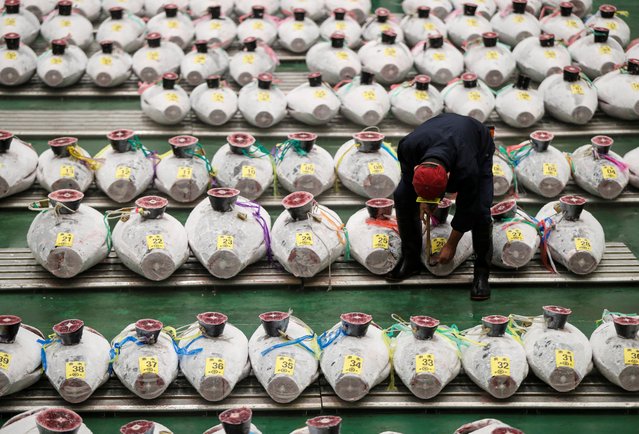 A wholesaler checks the quality of frozen tuna displayed during the tuna auctions, amid the coronavirus disease (COVID-19) outbreak, at Toyosu fish market in Tokyo, Japan on August 25, 2020. (Photo by Issei Kato/Reuters) 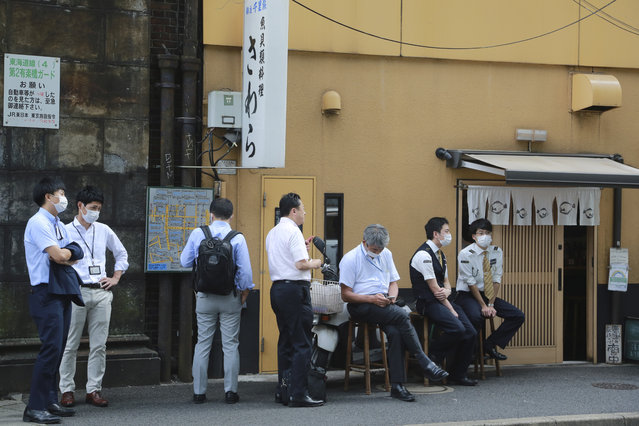 People wearing face masks to protect against the spread of the coronavirus wait to enter a Japanese restaurant for lunch in Tokyo, Tuesday, September 15, 2020. (Photo by Koji Sasahara/AP Photo) 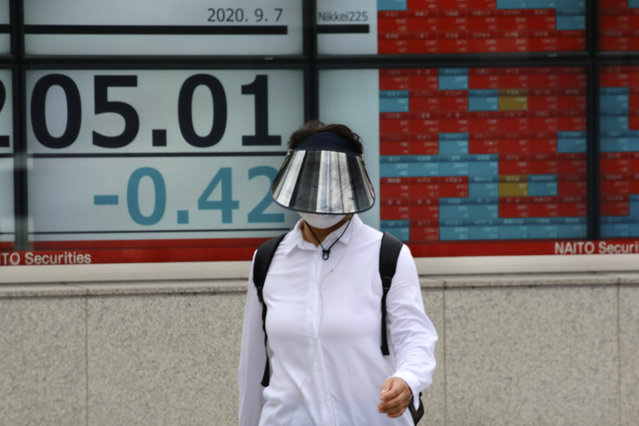 A woman walks by an electronic stock board of a securities firm in Tokyo, Monday, September 7, 2020. Asian stock markets were mixed Monday after Wall Street turned in its biggest weekly decline in more than two months. (Photo by Koji Sasahara/AP Photo) 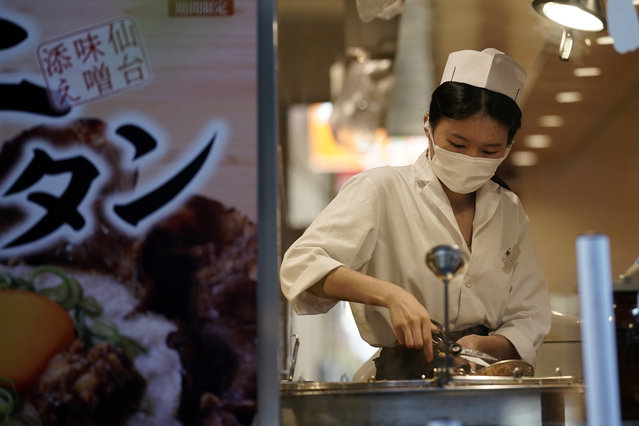 A restaurant employee wearing a face mask to help curb the spread of the coronavirus prepare a dish for a customer, Thursday, Septenber 10, 2020, in Tokyo. (Photo by Eugene Hoshiko/AP Photo) 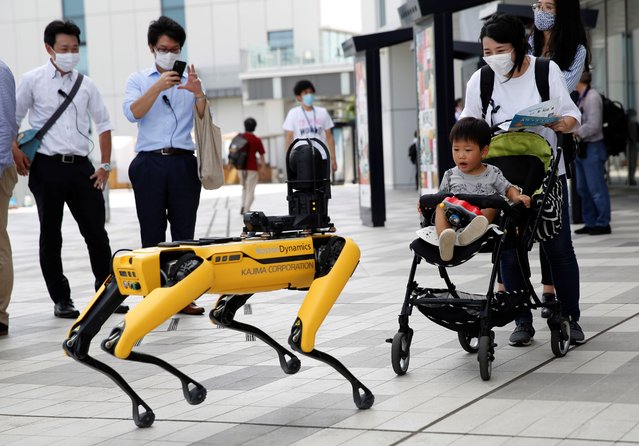 A boy in a stroller reacts to Boston Dynamics' four-legged robot Spot during its demonstration at Tokyo Robot Collection, Japan on September 18, 2020. (Photo by Kim Kyung-Hoon/Reuters) 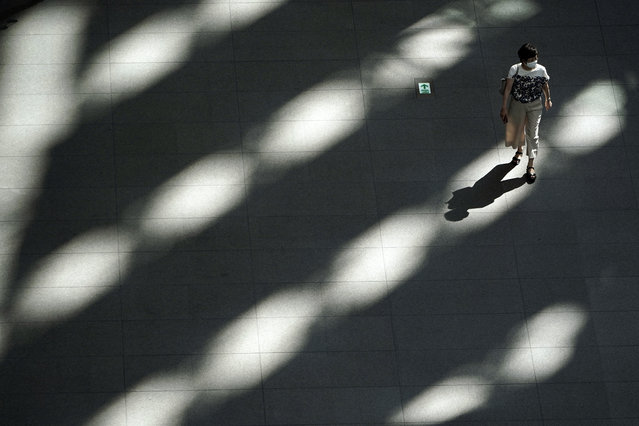 A woman wearing a protective mask to help curb the spread of the coronavirus walks in the shade of a building Friday, September 4, 2020, in Tokyo. (Photo by ugene Hoshiko/AP Photo) 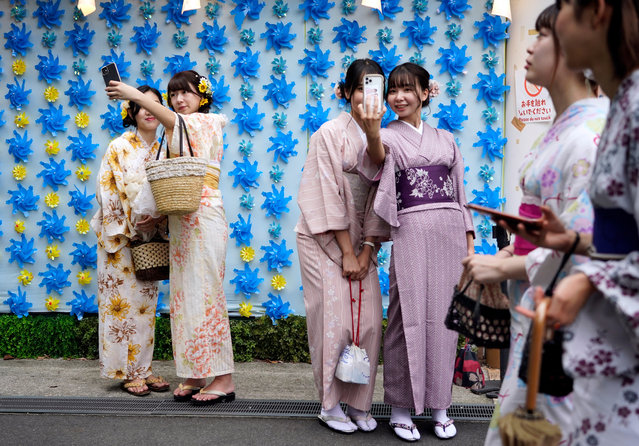 Japanese women wearing “yukata” casual summer kimono take selfies at Asakusa district in Tokyo, Japan, 13 September 2020. Asakusa is one of Tokyo's most-visited areas and is usually crowded with tourists. In Japan, the numbers of visitors from abroad fell by 99.9 percent from a year earlier in July due to the ban for entries of foreign visitors amid the coronavirus pandemic. (Photo by Franck Robichon/EPA/EFE)
Edit Del
24 Sep 2020 00:01:00, post received 0 comments
Publication archive:
←   →
Popular tags:
All tags
Last searches: