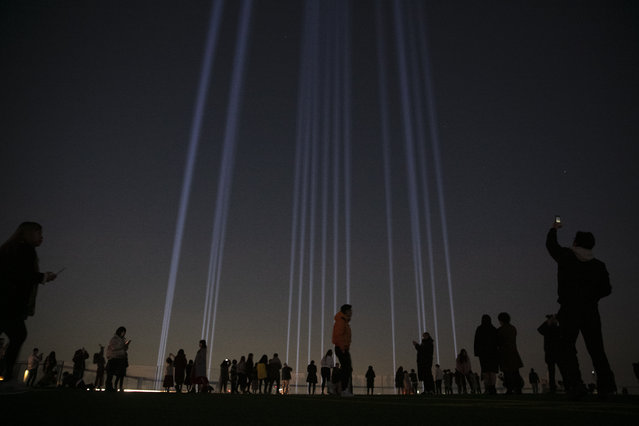 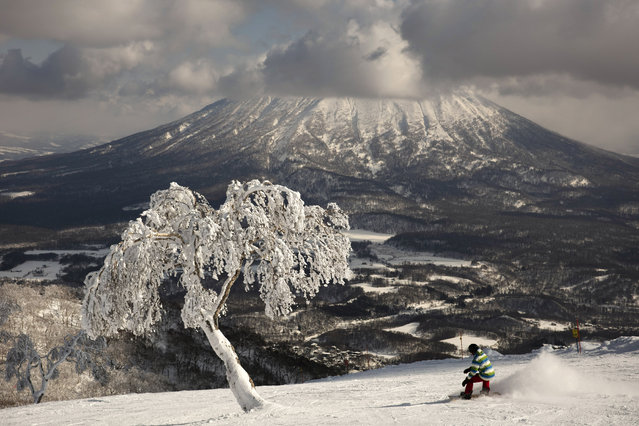 A man snowboards down a slope overlooking Mount Yotei at a ski resort February 5, 2020, in Niseko, Hokkaido, Japan. “There’s a lot less snow”, said Nguyen Nguyen, a skier visiting from Hong Kong. “This is definitely the worst I’ve ever seen it”. (Photo by Jae C. Hong/AP Photo) 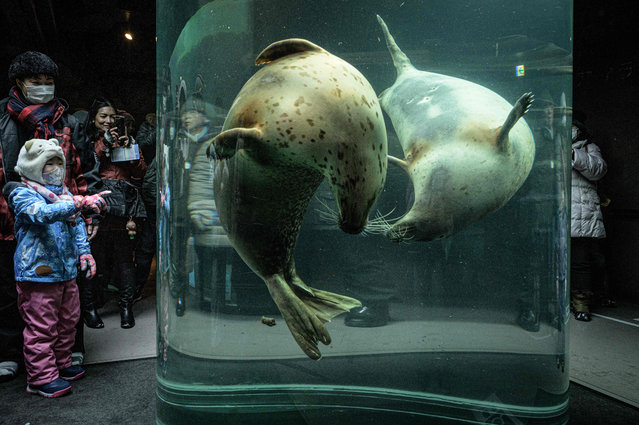 This photo taken on February 7, 2020 shows spotted seals swimmimg in a water tank at the Asahiyama zoo in Asahikawa, northern Japan. (Photo by Yasuyoshi Chiba/AFP Photo) 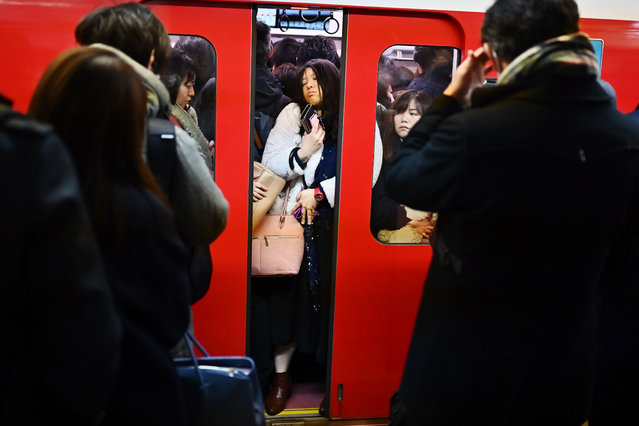 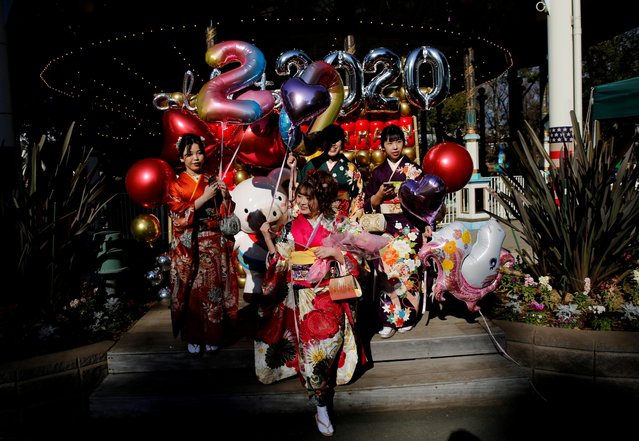 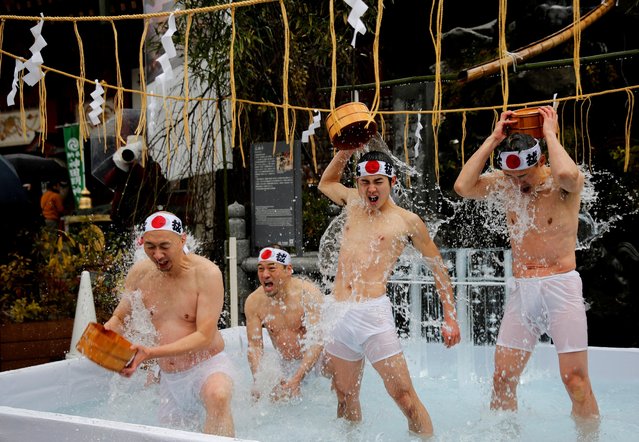 Men splash themselves with cold water during the annual cold water endurance ceremony, to purify their souls and wish for good fortune in the new year, at the Kanda Myojin shrine in Tokyo, Japan, January 18, 2020. (Photo by Kim Kyung-Hoon/Reuters) 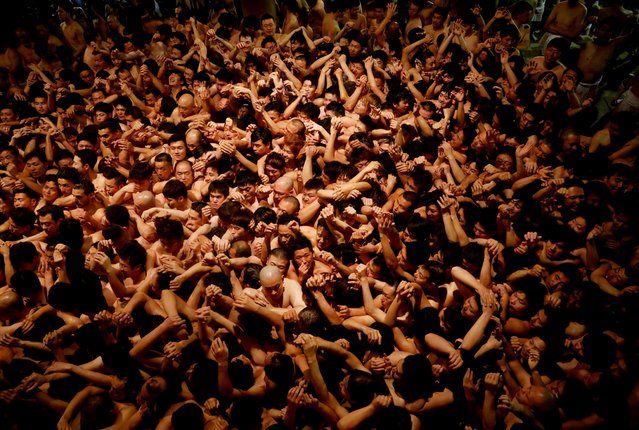 Men dressed in loincloths prepare to snatch a wooden stick called “shingi” tossed by the priest during a naked festival at Saidaiji Temple in Okayama, Okayama Prefecture Japan February 15, 2020. The person who grabs the wooden stick is considered the “luckiest man of the year”. (Photo by Kim Kyung-Hoon/Reuters) 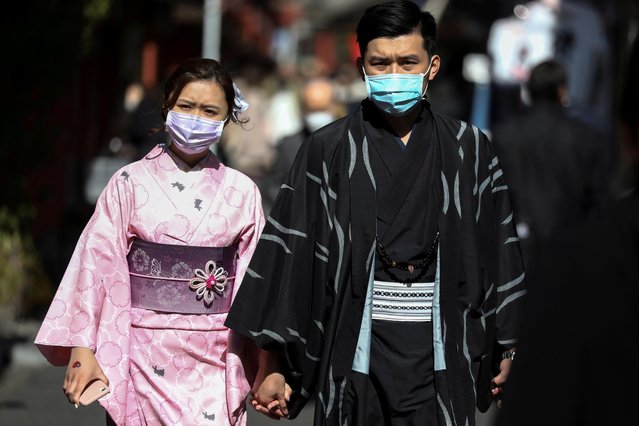 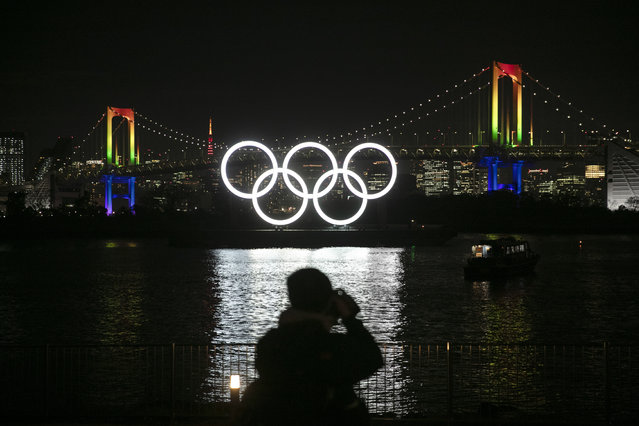 A photographer takes pictures of the illuminated Olympic rings in front of the Rainbow Bridge Friday, January 24, 2020, in the Odaiba district of Tokyo. Tokyo put on a flashy fireworks display on Friday to mark the 6-months-to-go milestone for this summer's Olympics. (Photo by Jae C. Hong/AP Photo) 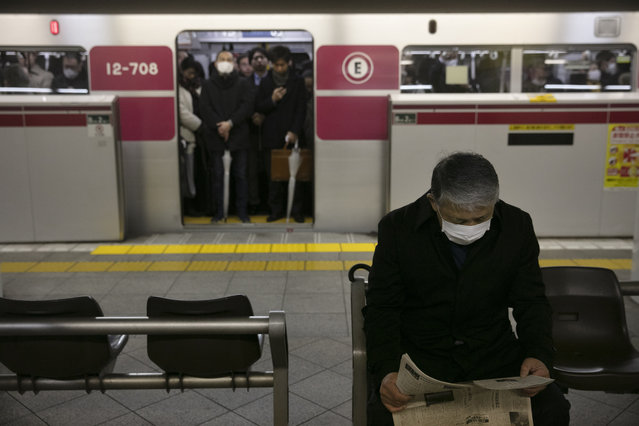 A commuter wearing a mask reads a newspaper while waiting for a train to arrive during morning rush hours Tuesday, January 28, 2020, in Tokyo. China on Tuesday reported 25 more deaths from a new viral disease as the U.S. government prepared to evacuate Americans from the city at the center of the outbreak. Japan, Mongolia, France and other governments also were preparing evacuations. (Photo by Jae C. Hong/AP Photo) 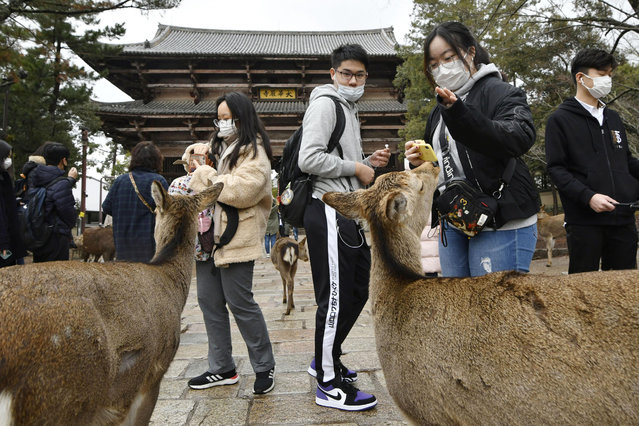 Chinese tourists wearing face masks visit famed Nara Park in Nara, western Japan, Wednesday, January 29, 2020. Japan's health officials on Tuesday said that it has confirmed what could be the first human-to-human infection in the country. The first suspected person-to-person infection involves a male patient in his 60s from Nara, who has not traveled to Wuhan. The man, however, is a tour bus driver who served two groups of Chinese tourists from Wuhan from Jan. 8-16. (Photo by Nobuki Ito/Kyodo News via AP Photo) 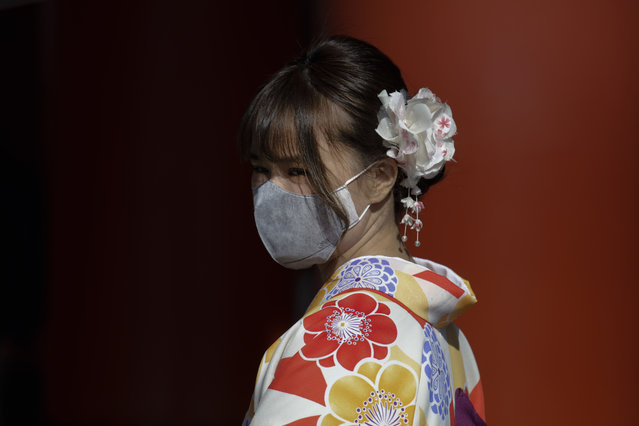 A tourist pauses for photos with her mask on at Sensoji Temple Thursday, January 30, 2020, in Tokyo. The country began evacuating Japanese citizens on Wednesday from the Chinese city Wuhan hardest-hit by the virus. (Photo by Jae C. Hong/AP Photo) 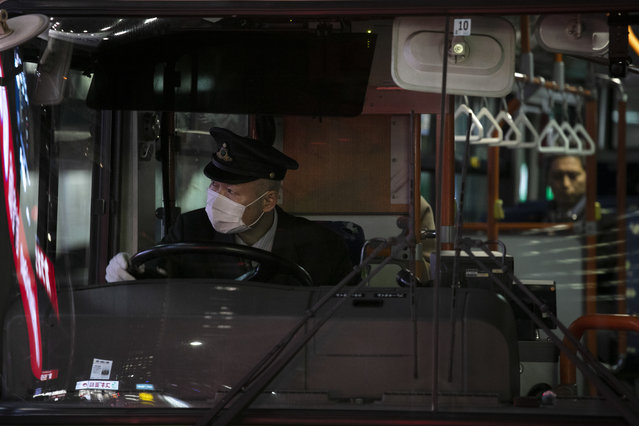 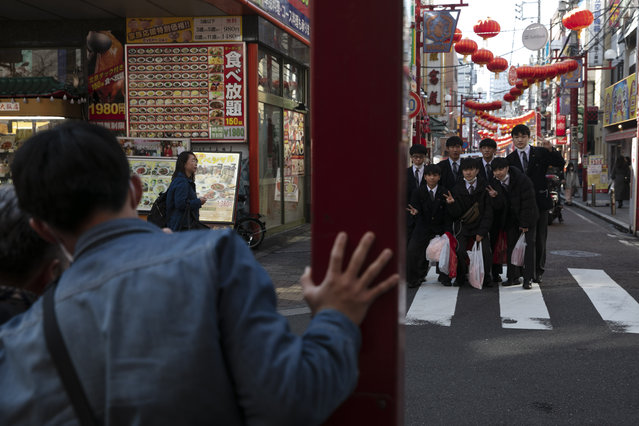 In this February 13, 2020, photo, a group of students gather for a group picture in Yokohama's Chinatown, near Tokyo. A top Olympic official made clear Friday the 2020 Games in Tokyo will not be cancelled despite the virus that has spread from China. (Photo by Jae C. Hong/AP Photo) 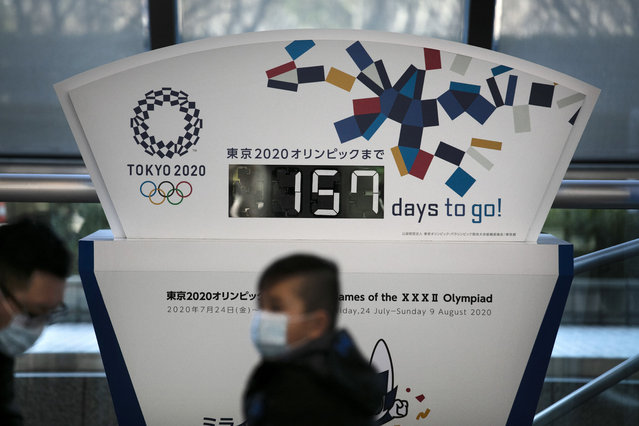 Two people wearing masks sit in front of a countdown clock for the Tokyo 2020 Olympics Tuesday, February 18, 2020, in Tokyo. Tokyo Olympic organizers said last week there is no “Plan B” for the 2020 Games, which open in just over five months and have been jolted by the outbreak of a virus in neighboring China. (Photo by Jae C. Hong/AP Photo) 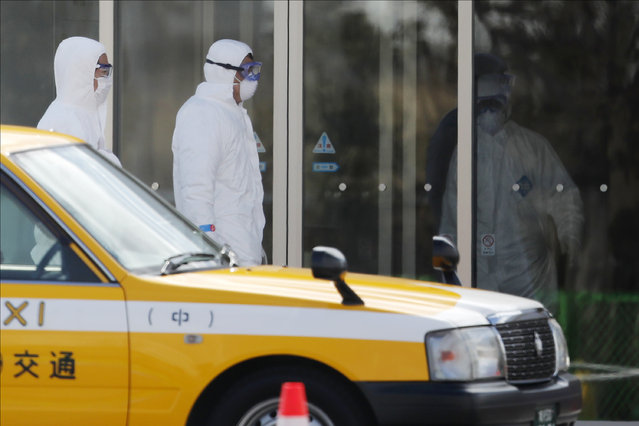 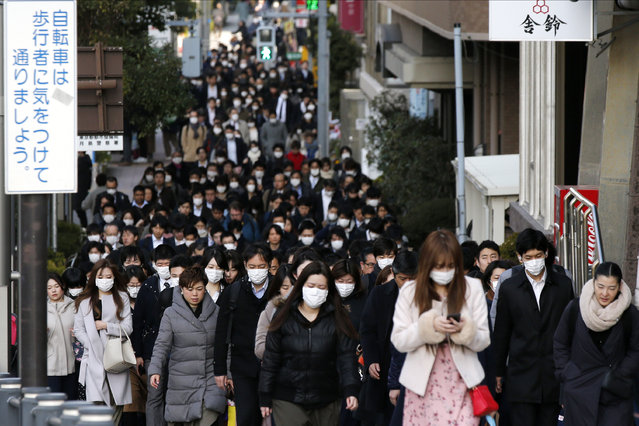 People wear masks as they commute during the morning rush hour Thursday, February 20, 2020, in Chuo district in Tokyo. A test event for the Tokyo Olympics scheduled for later this month that would have involved some non-Japanese athletes is being rejiggered because of fear of the spreading virus from China. It will now involve only Japanese athletes. (Photo by Kiichiro Sato/AP Photo) 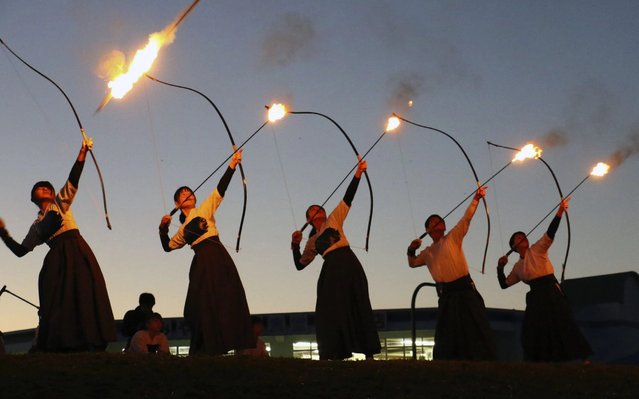 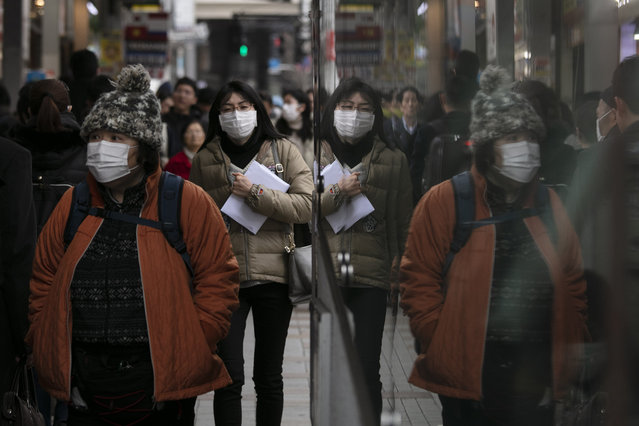 Commuters wearing protective face masks walk on a sidewalk Monday, January 27, 2020, in the Shinjuku district of Tokyo. China has extended its Lunar New Year holiday three more days to discourage people from traveling as it tries to contain the spread of a viral illness that has caused dozens of deaths. (Photo by Jae C. Hong/AP Photo) 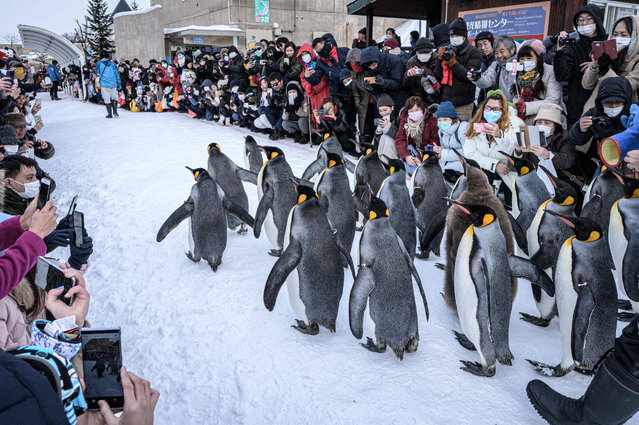