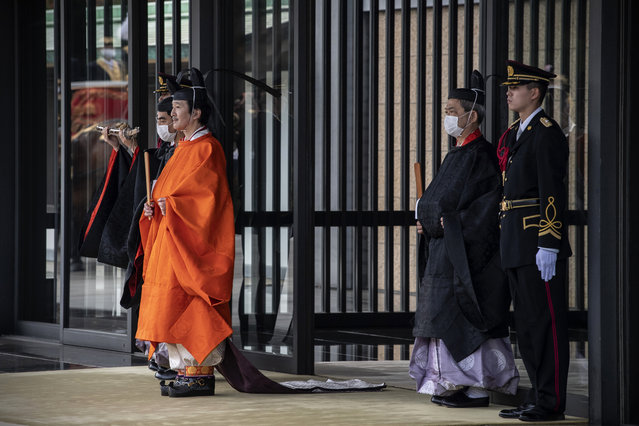 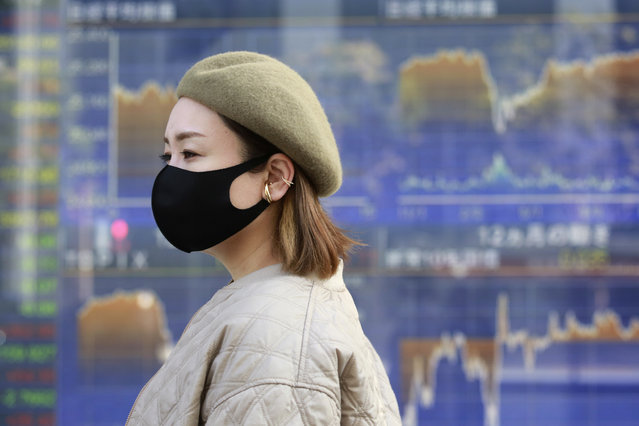 A woman walks by an electronic stock board of a securities firm in Tokyo, Wednesday, November 11, 2020. Shares were mostly higher Wednesday in Asia after a worldwide rally spurred by hopes that a COVID-19 vaccine will help the global economy return to normal. (Photo by Koji Sasahara/AP Photo) 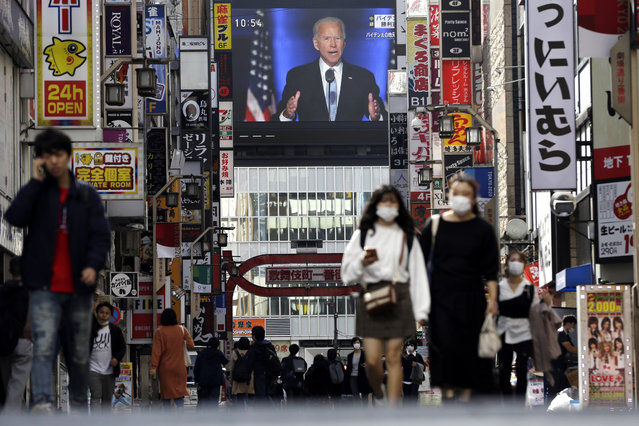 In this November 8, 2020, file photo a screen shows a live broadcast of President-elect Joe Biden speaking at the Shinjuku shopping district in Tokyo. (Photo by Kiichiro Sato/AP Photo/File) 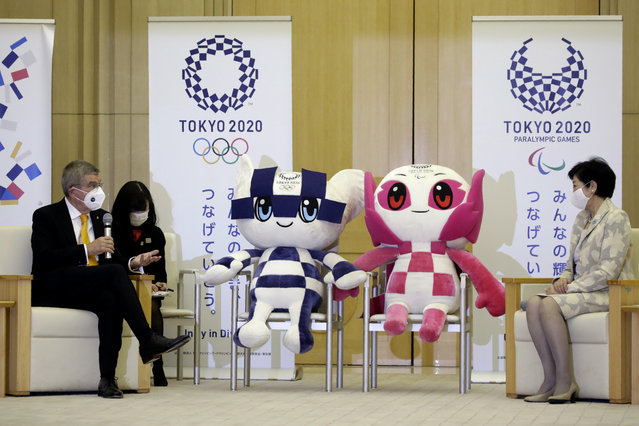 International Olympic Committee President Thomas Bach, left, talks with Tokyo Governor Yuriko Koike, right, during their meeting in Tokyo, Monday, November 16, 2020. IOC President Bach is beginning a visit to Tokyo to convince politicians and the Japanese public that the postponed Olympics will open in just over eight months.(Photo by Koji Sasahara/AP Photo) 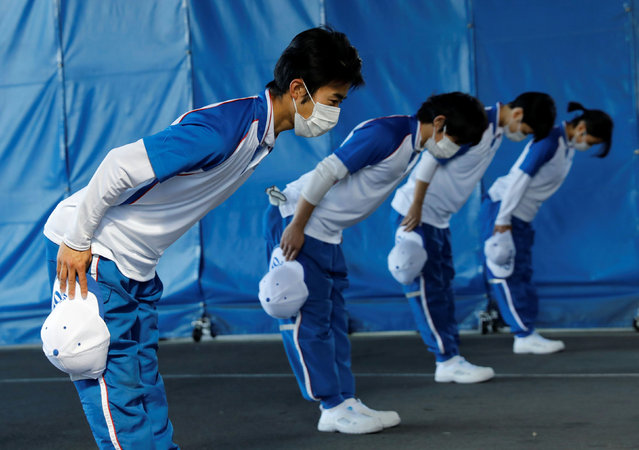 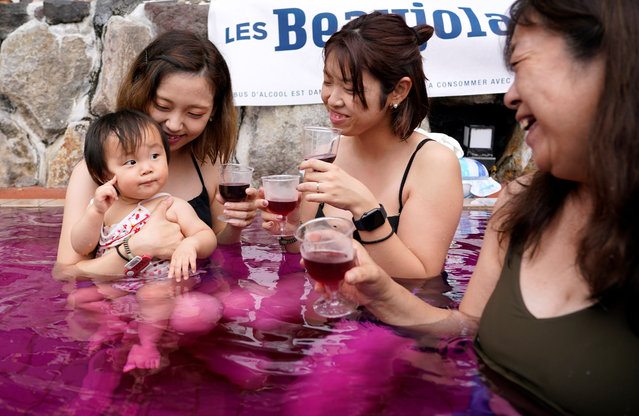 Japanese women hold glasses filled with 2020 Beaujolais Nouveau wine, or grape juice for children, as they bathe in a red colored hot water bath, on the day of the Beaujolais Nouveau official release, at Hakone Kowakien Yunessun hot spring resort in Hakone, Japan, 19 November 2020. Japan is a major market for the Beaujolais Nouveau. However, according to local media reports, the country’s total Beaujolais Nouveau imports are expected to fall by 30 percent year-on-year to around 280,000 cases, or 3,36 million bottles, amid the ongoing coronavirus pandemic. (Photo by Franck Robichon/EPA/EFE) 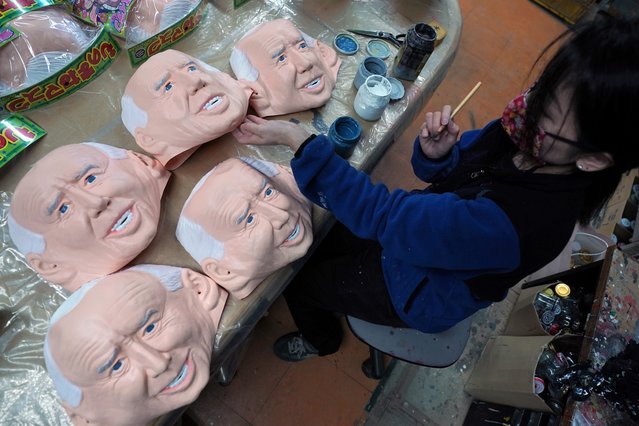 An employee adds details to rubber masks depicting President-elect Joe Biden at the Ogawa Studios in Saitama, north of Tokyo, Wednesday, November 11, 2020. Ogawa Studios, a Japanese manufacturer started making the masks since the middle of October, ahead of last week's election. (Photo by Eugene Hoshiko/AP Photo) 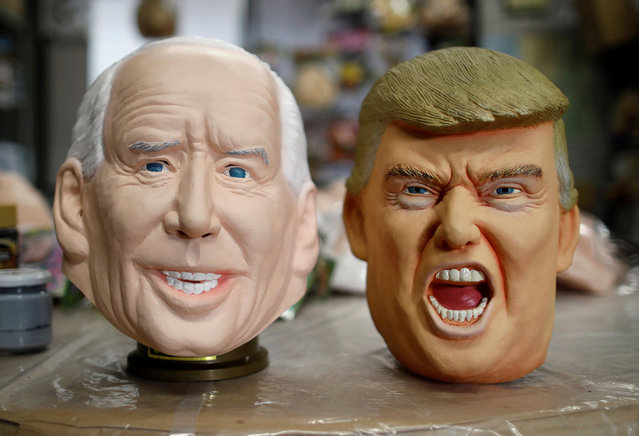 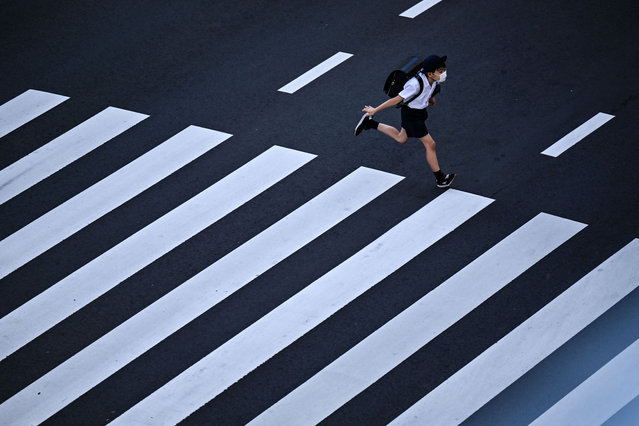 A school student crosses a street in Tokyo on November 10, 2020. (Photo by Charly Triballeau/AFP Photo) 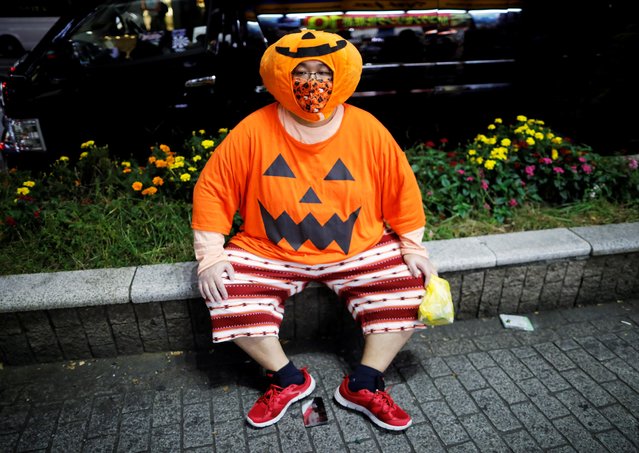 A reveller dressed in a costume takes a break on the street near Shibuya crossing during Halloween, amid the coronavirus disease (COVID-19) outbreak, in Tokyo, Japan on October 31, 2020. (Photo by Issei Kato/Reuters) 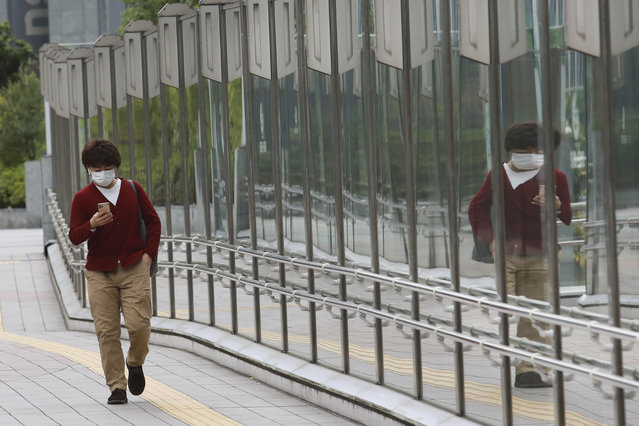 A man wearing a face mask to protect against the spread of the coronavirus walks on a pedestrian overpass in Tokyo, Tuesday, November 24, 2020. (Photo by Koji Sasahara/AP Photo) 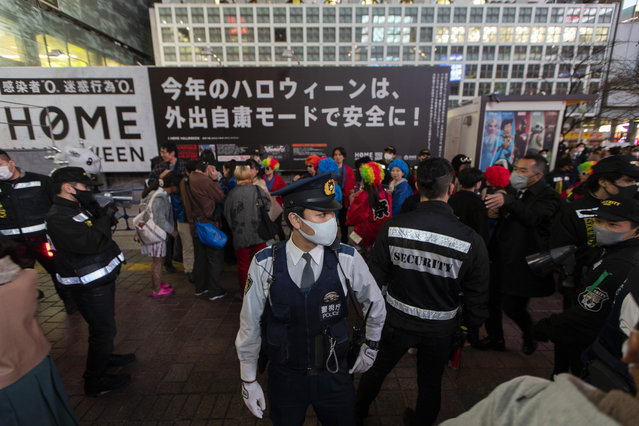 Police officers and security guards direct bystanders not to pause and stop pedestrian traffic as they try to watch people in Halloween costumes gathered near Tokyo's famed Shibuya traffic intersection Saturday, October 31, 2020. The sign in the background reads, “Refrain from going out to be safe during this year's Halloween”. Halloween for Japanese people is simply a fun time, but the city government asked people not to gather because of the pandemic. (Photo by Hiro Komae/AP Photo) 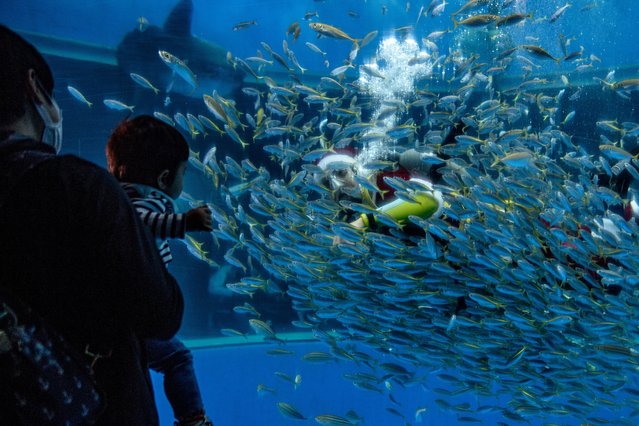 People watch a diver dressed as a Santa Claus feeds fish in an aquarium at the Hakkeijima Sea paradise in Yokohama on November 22, 2020. (Photo by Philip Fong/AFP Photo) 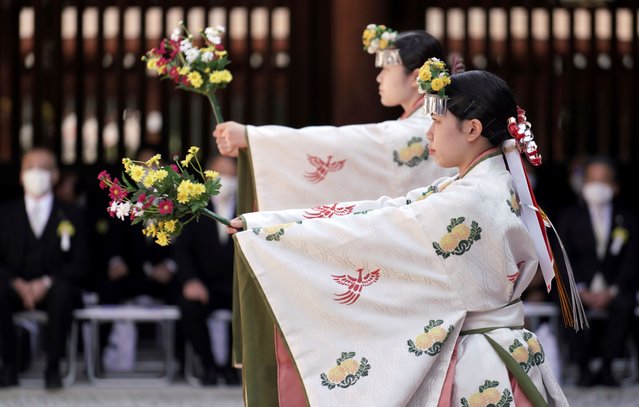 Shrine maidens in ritual clothing perform a ceremonial dance to mark the 100th anniversary of the Meiji Jingu Shinto shrine in Tokyo Sunday, November 1, 2020. Meiji Jingu, was built in 1920 to pay tribute to the Emperor Meiji and Empress Shoken. (Photo by Eugene Hoshiko/AP Photo) 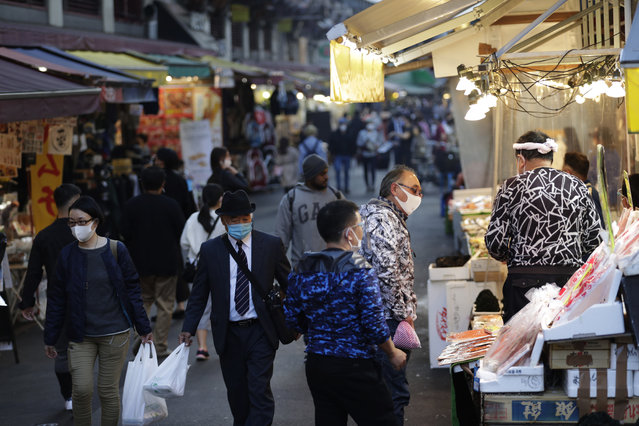 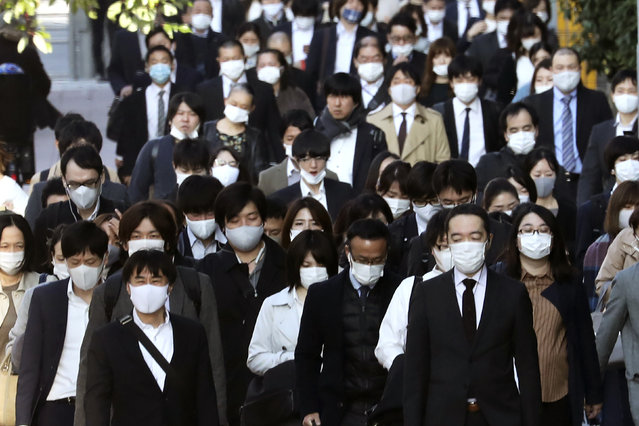 Commuters wearing face masks to protect against the spread of the coronavirus walk on a street in Tokyo, Tuesday, November 17, 2020. (Photo by Koji Sasahara/AP Photo) 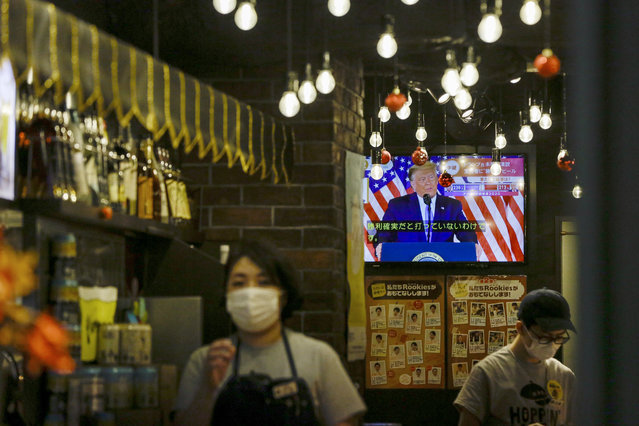 President Donald Trump speaking from the White House is projected on a television at a restaurant Wednesday, November 4, 2020 in Tokyo. (Photo by Kiichiro Sato/AP Photo) 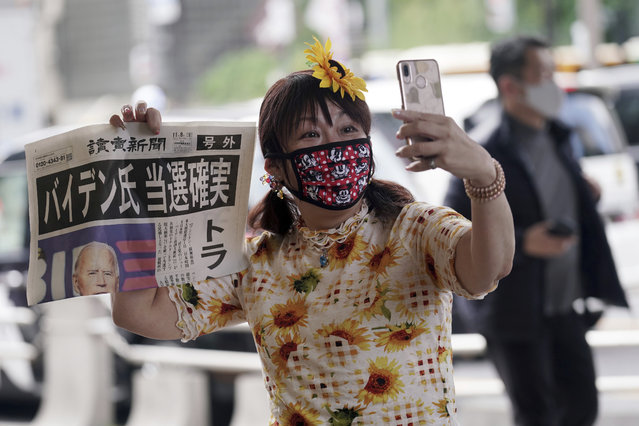 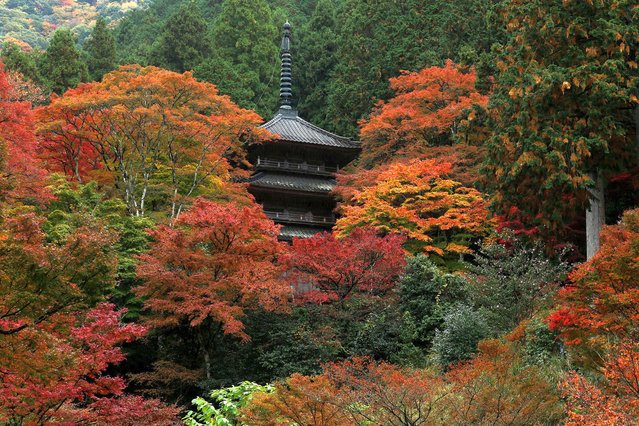