Fact A Look at Life in Nepal 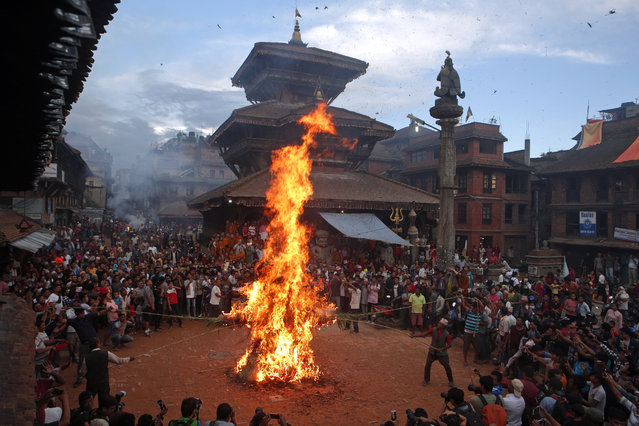 Nepalese people burn an effigy of demon Ghantakarna to represent demolition of evil during the Ghantakarna festival in Bhaktapur, Nepal, Friday, July 21, 2017. The festival is believed to ward off evil spirits, and bring peace and prosperity. (Photo by Niranjan Shrestha/AP Photo) 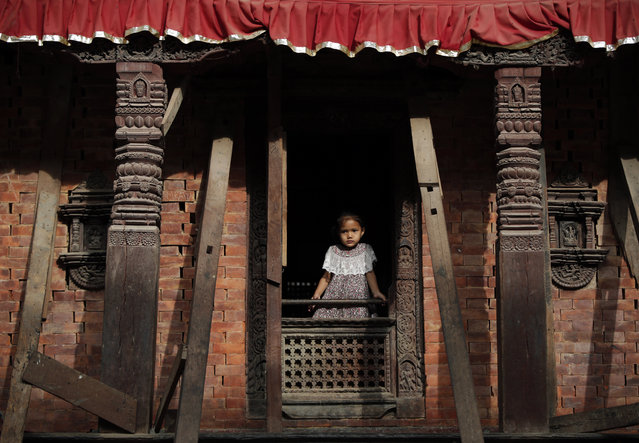 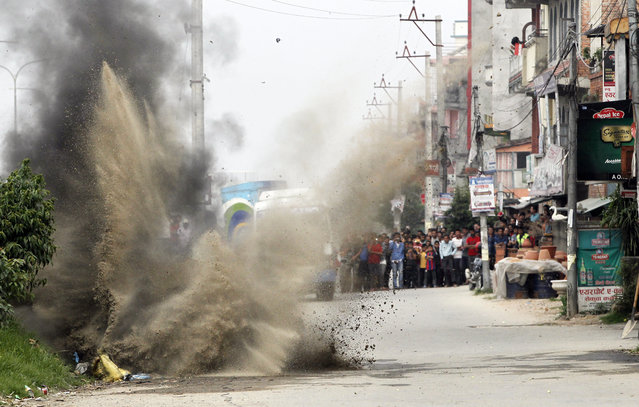 Nepalese Army's bomb disposal team detonate the explosives during the local election in Bhaktapur, Nepal, Sunday, May 14, 2017. Two explosive devices were planted across from a candidate's house. Nepalese were voting Sunday for representatives in municipal and village councils for the first time in two decades, a sign that the country's fractious democracy may be stabilizing. (Photo by Niranjan Shrestha/AP Photo) 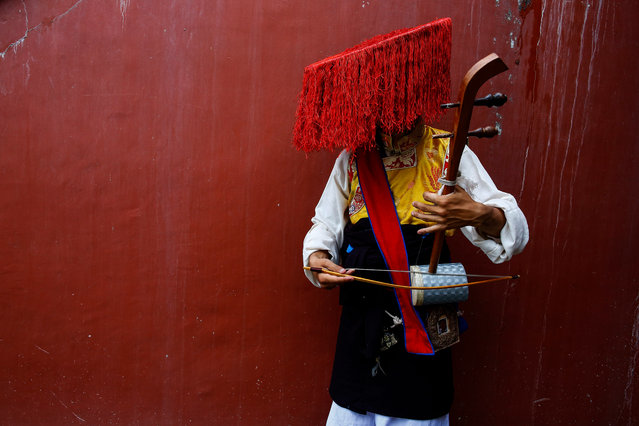 A Tibetan artists wearing a traditional costume waits before their performance during the 82nd pre-birthday celebration of Tibetan spiritual leader Dalai Lama at a Monastery in Kathmandu, Nepal, 05 July 2017. More than 1,000 monks and other Tibetans gathered at the Monastery compound to celebrate their spiritual leader's birthday. The Nepalese government has banned all kinds of Tibetan activities against the Chinese rule in Tibet so Tibetans have been changing the venue of the Dalai Lama's birthday celebration. The Dalai Lama will turn 82 on 06 July 2017. (Photo by Narendra Shrestha/EPA) 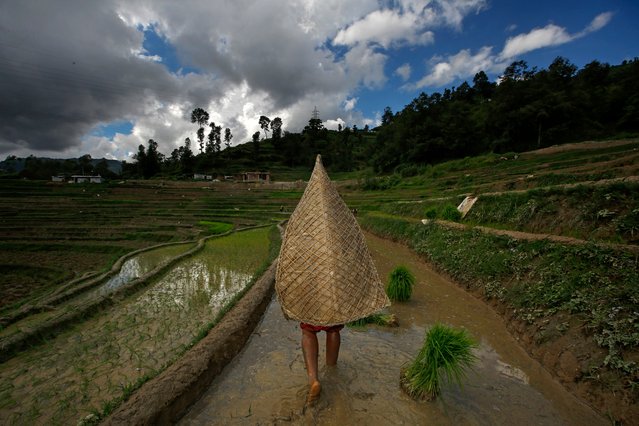 Farmers plant rice in a paddy field during National Paddy Day Tinpiple village, on the outskirt of capital Kathmandu, Nepal, 29 June 2017. Nepal is celebrating National Paddy Day with various event on 29 June 2017. On this day, known as Asar Pandra, farmers begin the annual rice planting season and mark the day with various festivities such as preparing rice meals with muddy water, mud being a symbol for a prosperous season. The agricultural sector contributes about 28.9 per cent to Nepal's gross domestic product (GDP). (Photo by Narendra Shrestha/EPA) 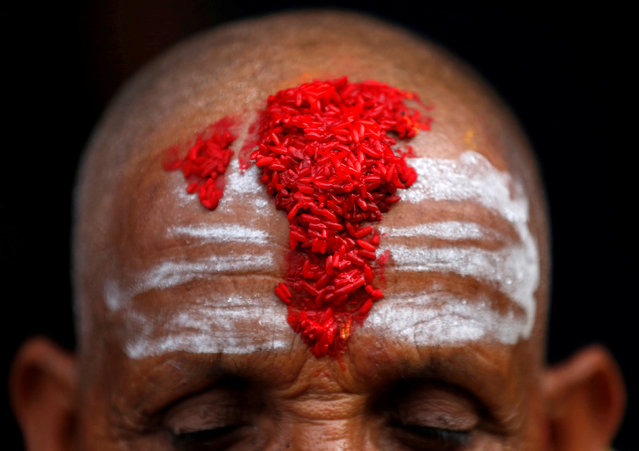 A Hindu priest's forehead is covered with “tika”, coloured powder and rice used as a blessing, during the sacred thread festival at the Pashupatinath temple in Kathmandu, Nepal July 28, 2017. Hindus take holy baths and change their sacred threads, also known as janai, for protection and purification during the festival. (Photo by Navesh Chitrakar/Reuters) 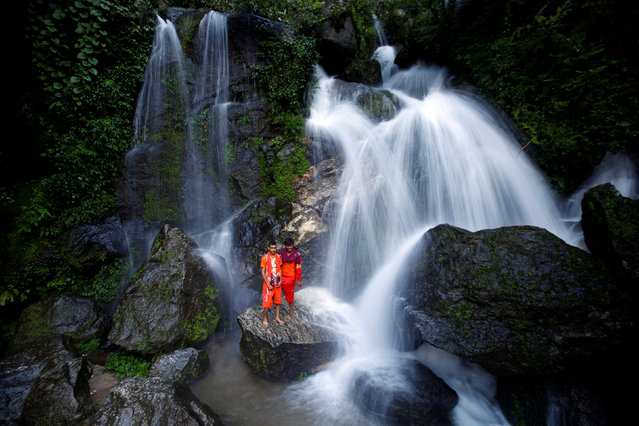 Devotees pose for a picture in front of the waterfall during the “Bol Bom” (Say Shiva) pilgrimage in Kathmandu, Nepal, July 31, 2017. The faithful, chanting the name of Lord Shiva, trek about 15 km (9 miles) toward Pashupatinath temple seeking good health, wealth and happiness. (Photo by Navesh Chitrakar/Reuters) 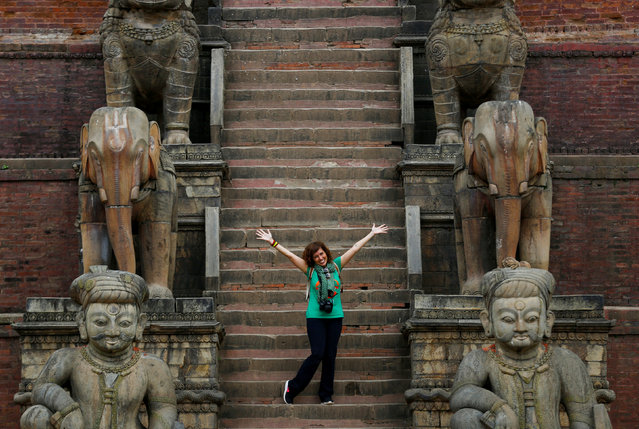 A Tourist poses for picture as she stands in front of the Nyatapola Temple, famous among tourists in Bhaktapur, Nepal August 1, 2017. (Photo by Navesh Chitrakar/Reuters) 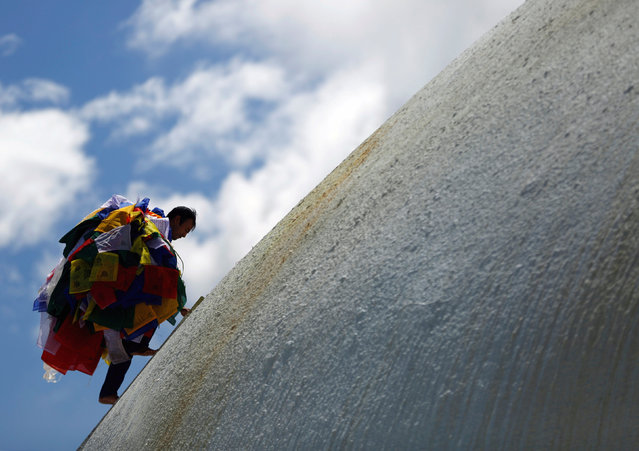 A man carries prayer flags offered by the devotees as he climbs to hang them from the Boudhanath Stupa, a UNESCO world heritage site famous among tourists, in Kathmandu, Nepal August 2, 2017. (Photo by Navesh Chitrakar/Reuters) 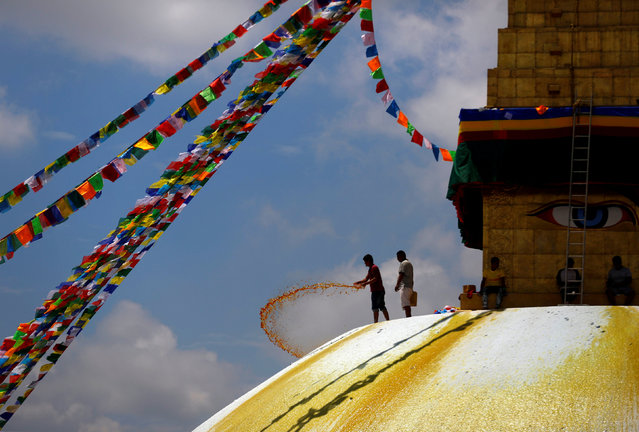 A man splashes paint on the dome of Boudhanath Stupa, a UNESCO world heritage site famous among tourists, in Kathmandu, Nepal August 2, 2017. (Photo by Navesh Chitrakar/Reuters) 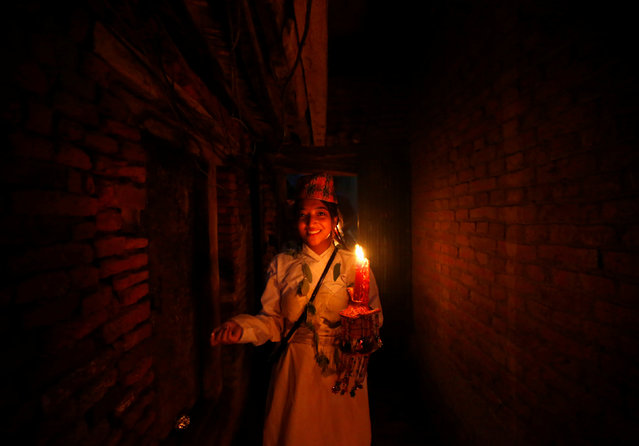 A devotee holding candle walks along the alley as she takes part in a parade commemorating the Neku Jatra-Mataya festival, the Festival of Lights, in Lalitpur, Nepal August 9, 2017. Devotees celebrate the Buddhist festival which marks the victory of Sakyamuni Buddha over Mara, by praying for the souls of departed family members and holding parades throughout the city. (Photo by Navesh Chitrakar/Reuters) 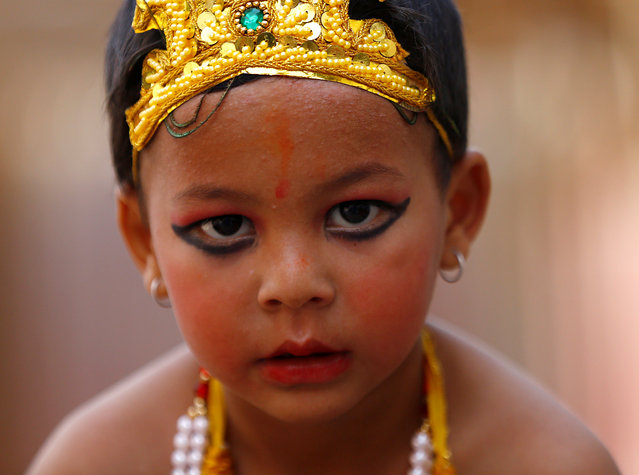 A boy dressed as Lord Krishna, a Hindu deity, participates in a parade to mark Gaijatra festival, also known as the “cow festival”, in Kathmandu, Nepal. Hindus in Kathmandu celebrate the festival to ask for salvation and peace for their departed loved ones. Cows are regarded as holy animals in Nepal which help departed souls to reach heaven. (Photo by Navesh Chitrakar/Reuters) 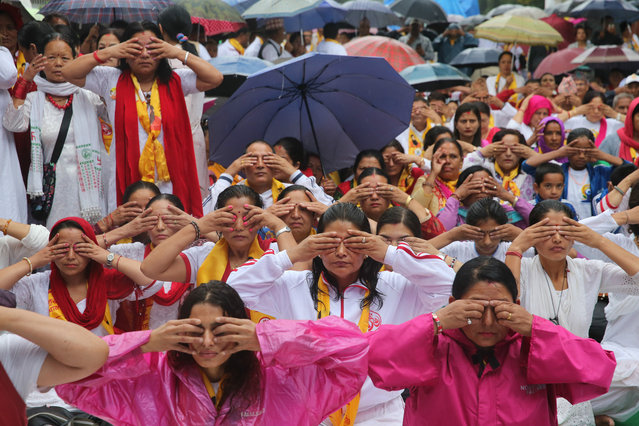 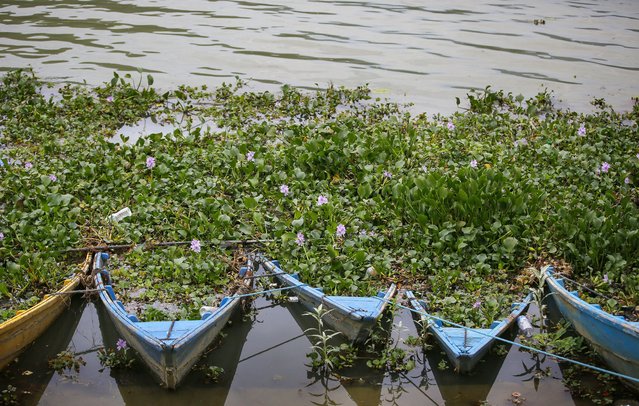 Boats full of plants as local people participate in a Water Hyacinth cleaning program at Phewa Lake in Pokhara, Nepal, 16 July 2017. Due to its fast growing, the water hyacinth has been occupying large larts of lake, a popular tourist destination of Nepal. Every year various members of the tourism sector take part in a clean-up action, but conditions have overall remained the same. The Water hyacinth is a free-floating perennial plant that can grow to a height of about 1 meter. (Photo by Narendra Shrestha/EPA/EFE) 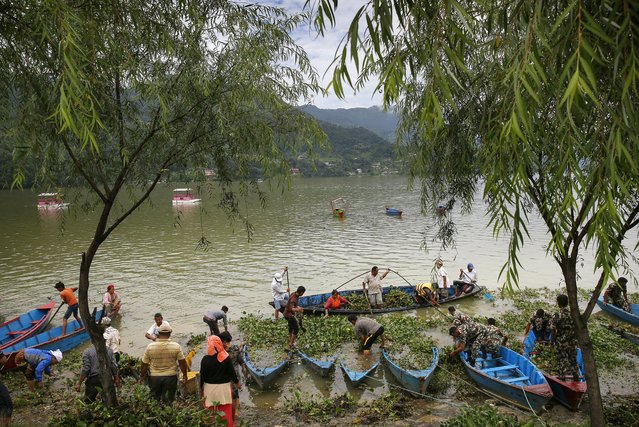 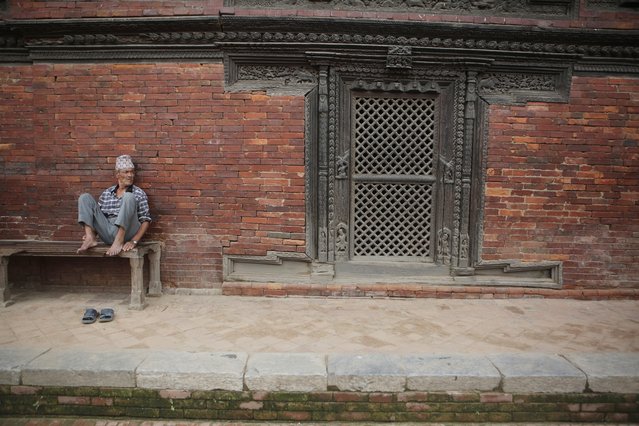 In this photo taken Friday, July 21, 2017, anelderly Nepalese man takes a rest at Patan Durbar Square in Lalitpur, Nepal. Centuries-old Char Narayan and Hari Shankara temples were completely destroyed by the massive April 2015 earthquake that shook the Himalayan nation, killing nearly 9,000 people. The temples were the jewel of the Patar Durbar Square, which is thronged by thousands of tourists and local visitors every day. The structures were crumpled by the force of the tremor and the carved doors, roof and brick structure lay in ruins. (Photo by Niranjan Shrestha/AP Photo) 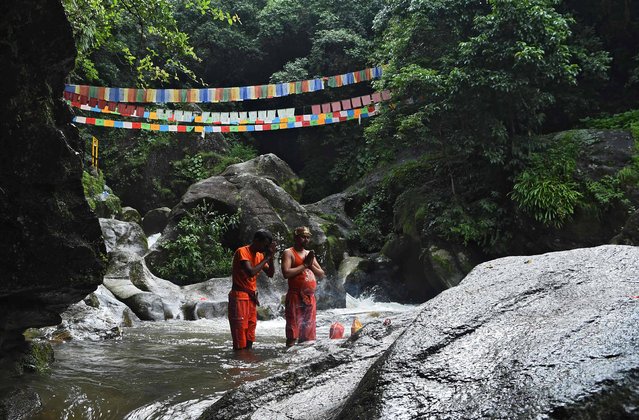 Nepali Hindu devotees pray during a walk to the Pashupatinath temple to offer prayers to Lord Shiva during Shravan festivities in Sundarijal, on the outskirts of Kathmandu on August 7, 2017. According to the Nepali calendar, Shravan is considered the holiest month of the year with each Monday of the month known as Shravan Somvar when worshippers offer prayers for a happy and prosperous life. (Photo by Prakash Mathema/AFP Photo) 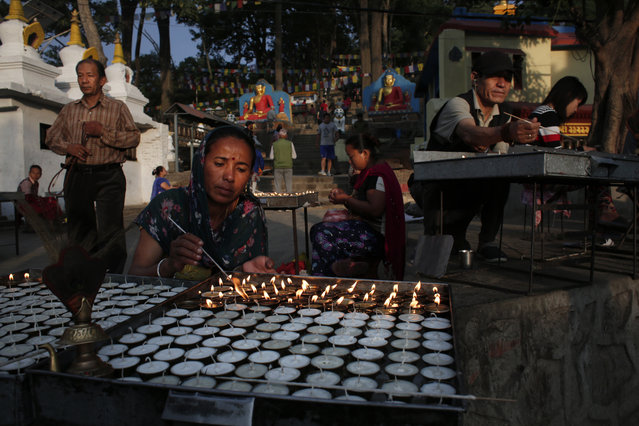 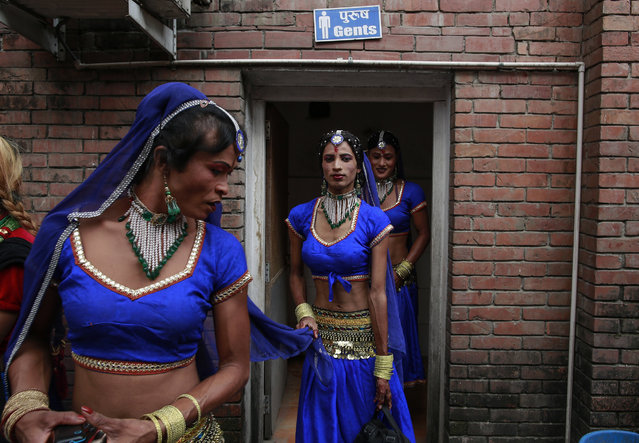