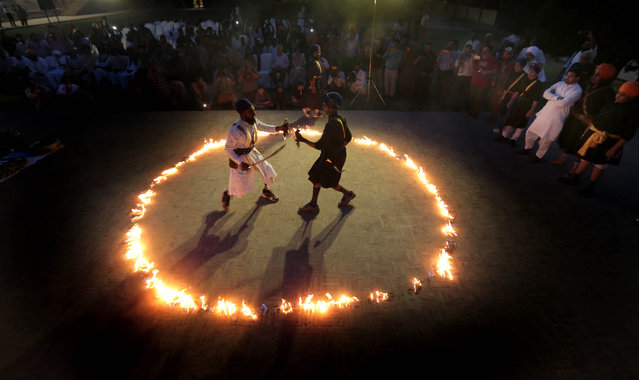 A general view of the sculpture of Sikh ruler Maharaja Ranjit Singh during celebrations related to the 180th death anniversary in Lahore, Pakistan, 27 June 2019 (issued 28 June). Every year thousands of Sikhs pilgrims come to Pakistan to visit the holy place. (Photo by Rahat Dar/EPA/EFE) 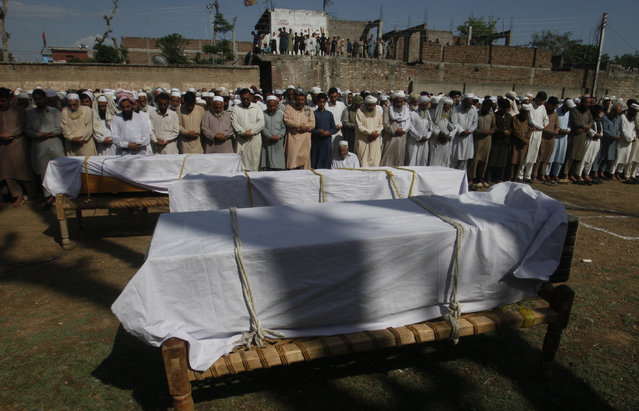 People offer funeral prayers of Pakistani villagers killed as a roof of their house caved in due to heavy rains, in Charsadda, Pakistan, Thursday, April 18, 2019. (Photo by Muhammad Sajjad/AP Photo) 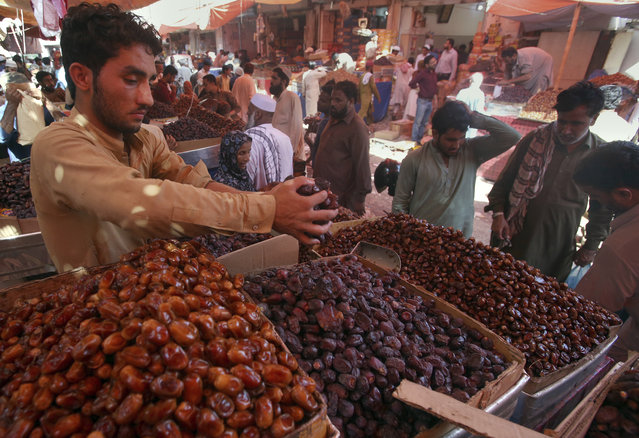 People buy dates, a favorite food for Muslims' fasting month of Ramadan, at a wholesale market in Karachi, Sunday, May 5, 2019. Muslims across the world will be observing Ramadan, when they refrain from eating, drinking and smoking from dawn to dusk. (Photo by Fareed Khan/AP Photo) 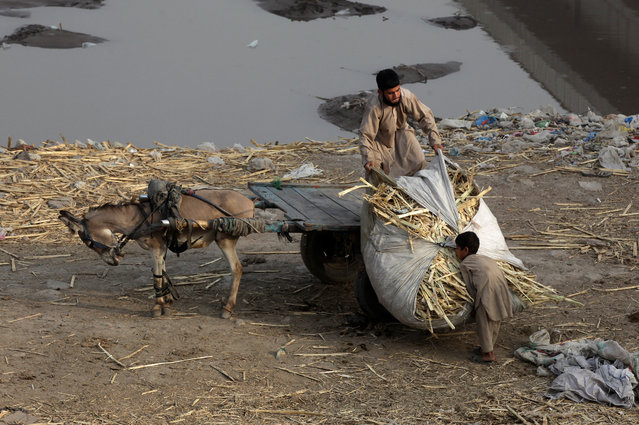 Siblings from an Afghan refugee family, load a sack of straws, collected from a nearby ground, in a low-income neighborhood in Lahore, Pakistan on June 20, 2019. (Photo by Mohsin Raza/Reuters) 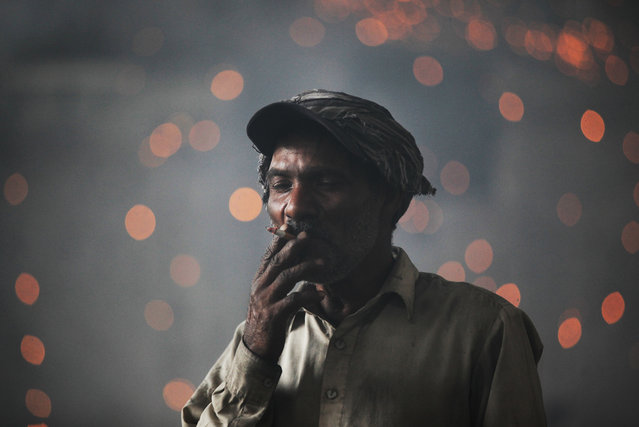 A laborer smokes a cigarette as he takes a break while working in a foundry, ahead of Labor Day, in Lahore, Pakistan on April 30, 2019. (Photo by Mohsin Raza/Reuters) 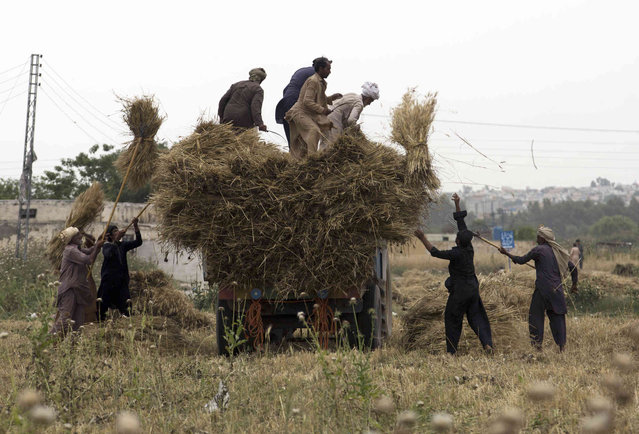 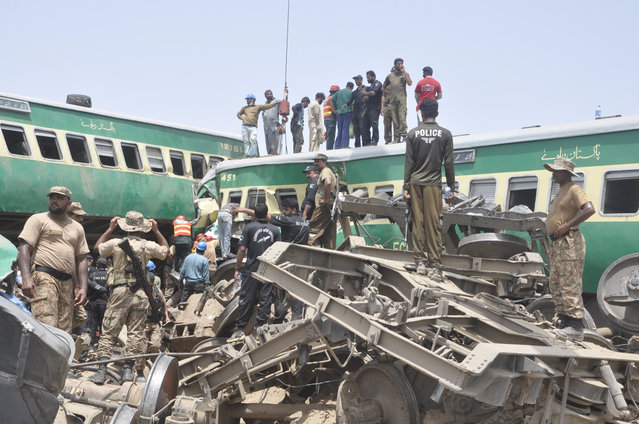 Pakistani officials and volunteers work at a train crash site in Rahim Yar Khan, Pakistan, Thursday, July 11, 2019. A passenger train rammed into a freight train in southern Pakistan on Thursday, killing many people and injuring others, an official said. (Photo by Waleed Saddique/AP Photo) 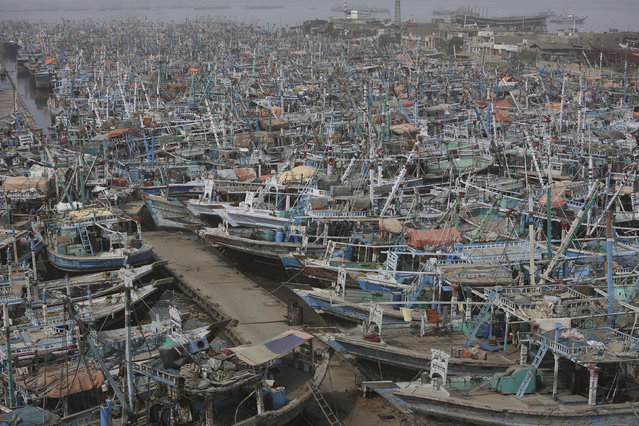 Pakistani fishing boats are called back from the sea following a warning by authorities of Cyclone Vayu at Karachi harbor in Pakistan, Thursday, June 13, 2019. The meteorological department Thursday issued an alert, warning fishermen to avoid fishing in the Arabian sea this week as the Cyclone Vayu could cause rough conditions in the sea. (Photo by Fareed Khan/AP Photo) 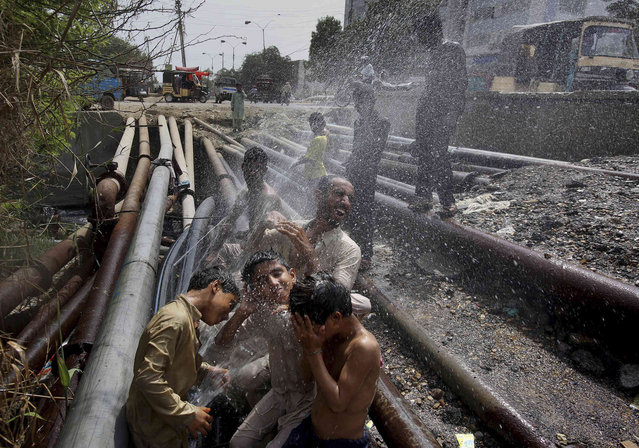 People cool themselves off in spray from broken water pipes at a road side in Karachi, Pakistan, where temperature reached above 42 degrees Celsius (108 Fahrenheit), Thursday, June 13, 2019. The meteorological department Thursday issued an alert, warning fishermen to avoid fishing in the Arabian sea this week as the Cyclone Vayu could cause rough conditions in the sea. (Photo by Fareed Khan/AP Photo) 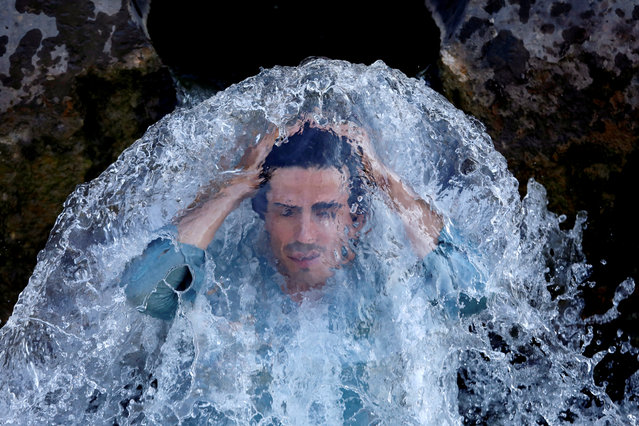 A man cools off under a water pipe from a canal on the outskirts of Peshawar, Pakistan on June 13, 2019. (Photo by Fayaz Aziz/Reuters) 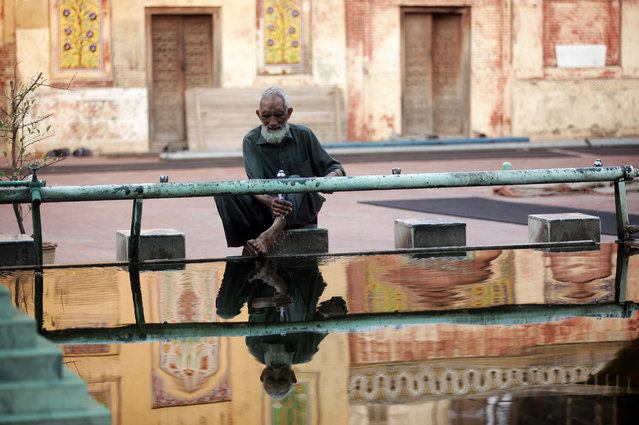 A reflection of a man is seen in a pool of water as washes his feet at a mosque during the fasting month of Ramadan in Lahore, Pakistan, May 16, 2019. (Photo by Mohsin Raza/Reuters) 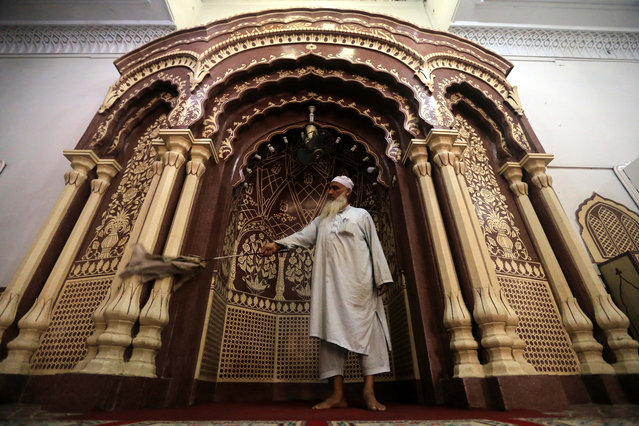 A man cleans a Mosque ahead of the Muslims holy fasting month of Ramadan in Peshawar, Pakistan, 05 May 2019. Muslims around the world celebrate the holy month of Ramadan by praying during the night time and abstaining from eating, drinking, and sexual acts daily between sunrise and sunset. Ramadan is the ninth month in the Islamic calendar and it is believed that the Koran's first verse was revealed during its last 10 nights. (Photo by Bilawal Arbab/EPA/EFE) 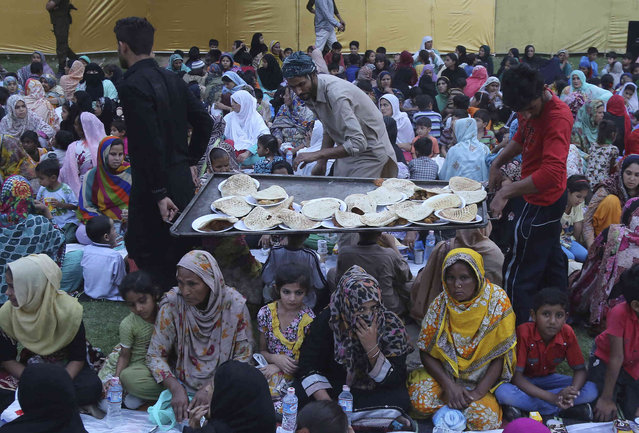 Pakistani volunteers distribute food among people at a roadside to break their fast during the Muslim fasting month of Ramadan, in Lahore, Pakistan, Thursday, May 9, 2019. Muslims around the world are observing Ramadan, the holiest month in Islamic calendar. (Photo by K.M. Chaudary/AP Photo) 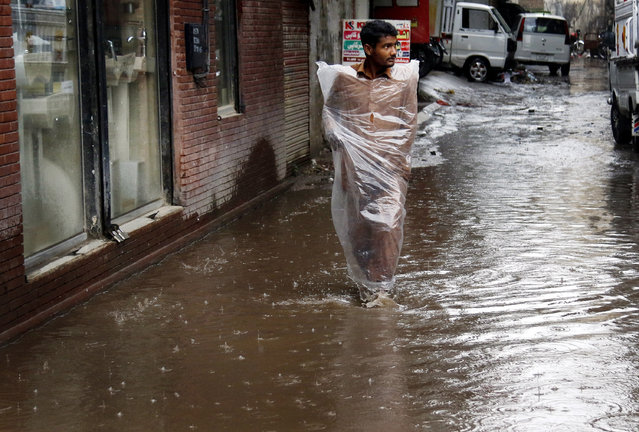 A man wades through a flooded street after heavy rain in Islamabad, Pakistan, 17 April 2019. At least 49 people have been killed as torrential rains wreaked havoc, damaging more than 100 houses, since the beginning of April in parts of Pakistan. The rains and hailstorms, unusual for this time of the year, have destroyed wheat crops in southern areas of Punjab. The province is the most populous in Pakistan and is home to more than half of the country's total 207-million population. (Photo by Sohail Shahzad/EPA/EFE) 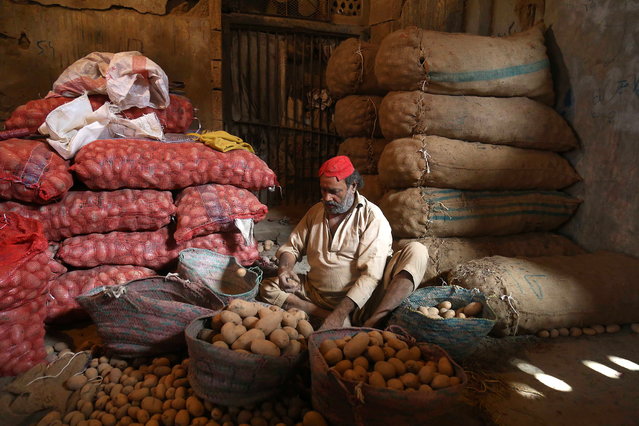 A worker sorts potatotes at a market in Karachi, Pakistan, 13 May 2019. Pakistan and the IMF have reached a new agreement securing a six billion US dollars bailout for the cash strapped country, following months of painstaking negotiations between the two sides. (Photo by Shahzaib Akber/EPA/EFE) 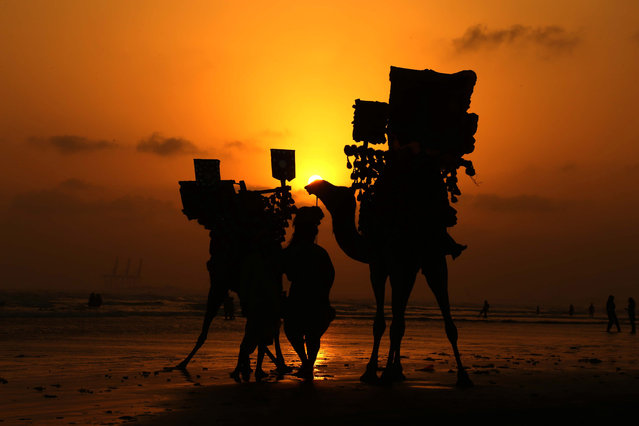 A man walks his camels during sunset at the beach in Karachi, Pakistan, 03 July 2019. (Photo by Shahzaib Akber/EPA/EFE) 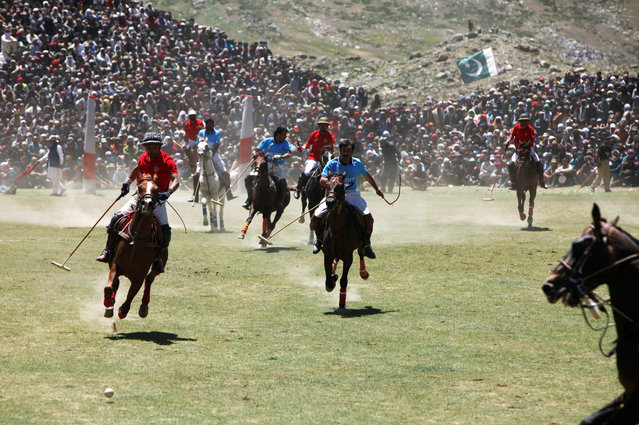 Players (Chitral in Red and Gilgit-Baltistan in Blue) fight for the ball during the annual Shandur Polo Festival, at Shandur Pass, at an estimated altitude of around 3700 meters, in Chitral, Pakistan on July 9, 2019. (Photo by Khurram Parvez/Reuters) 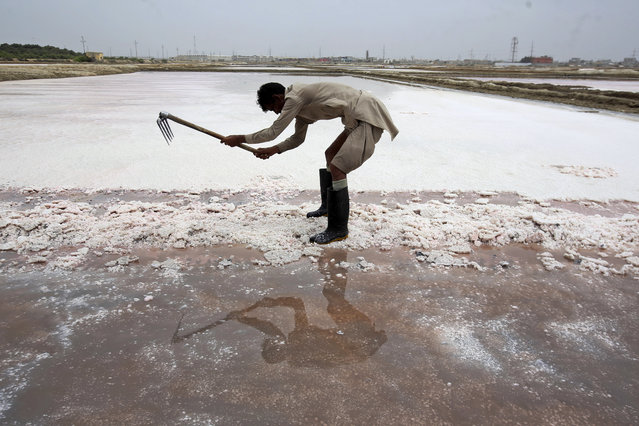 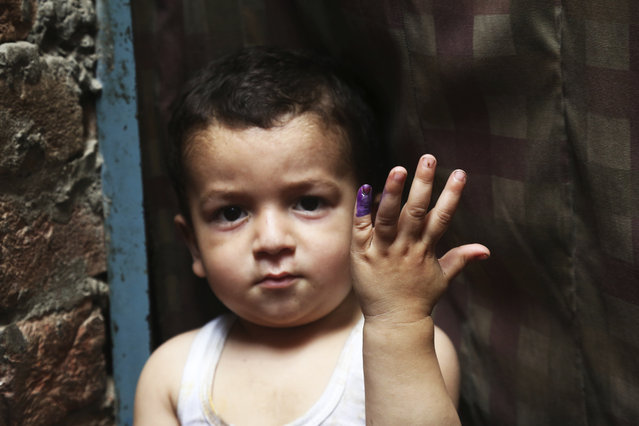 A Pakistani child shows his finger being marked after receiving the polio vaccine in Lahore, Pakistan, Wednesday, April 24, 2019. A Pakistani health official says two new polio cases have been reported in the country's northwest despite efforts against the crippling disease. (Photo by K.M. Chaudary/AP Photo) 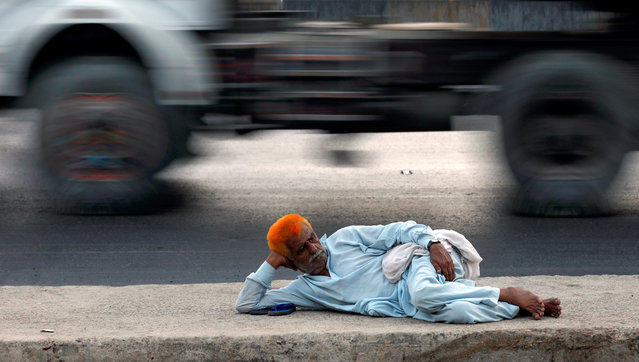 A man with henna-dyed hair rests on a road near the port area in Karachi, Pakistan on July 3, 2019. (Photo by Akhtar Soomro/Reuters) 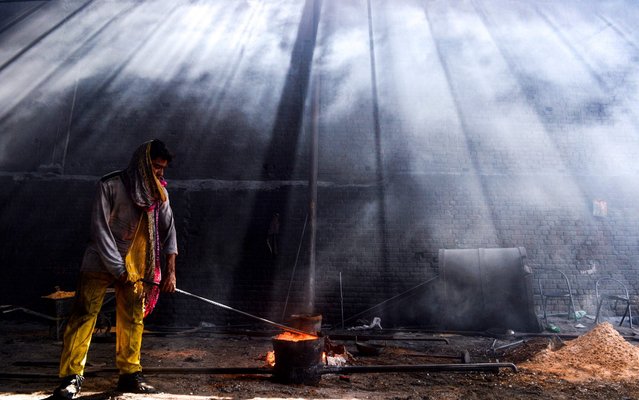 A Pakistani labourer works at an iron factory in Lahore on April 30, 2019, on the eve of the International Labour Day celebrated on May 1. (Photo by Arif Ali/AFP Photo) 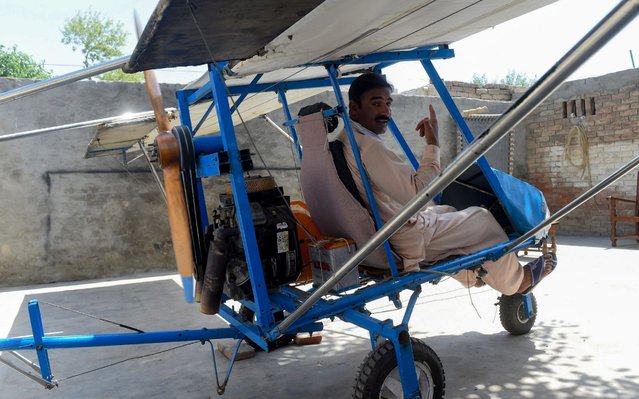 In this picture taken on April 8, 2019, Pakistani villager Muhammad Fayyaz poses for photographs as he sits in his small plane at his residence in Tabur village in central Punjab province. The engine is from a roadcutter, the wings are burlap, the wheels are borrowed from a rickshaw: a Pakistani popcorn seller has caught the attention of the Air Force by building his own plane. (Photo by Arif Ali/AFP Photo) 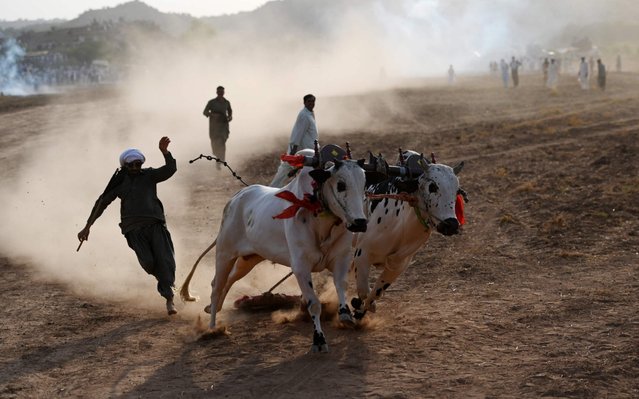 A Pakistani farmer tries to control his bulls as he competes in a traditional bull race in Bilawal village in Chakri, some 65 kilometers from Islamabad on July 4, 2019. Hundreds of people gather whenever there is a bull race held in Pakistan which are usually the highlight of festivals organized in rural areas of the Asian country, and attract lots of spectators due to their thrilling nature. The traditional competition attracts landlords and farmers from all around the province where the race is held, and they all bring their fastest and strongest bulls in hopes of gaining a reputation. (Photo by Aamir Qureshi/AFP Photo)
Edit Del
13 Jul 2019 00:01:00, post received 0 comments
Publication archive:
←   →
Popular tags:
All tags
Last searches: