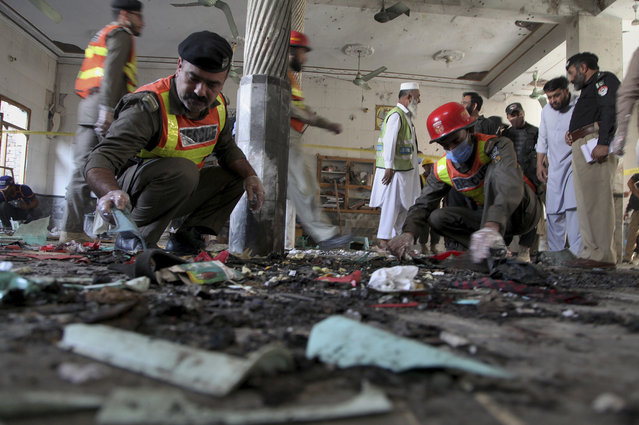 Pakistani rescue workers and police officers examine the site of a bomb explosion in an Islamic seminary, in Peshawar, Pakistan, Tuesday, October 27, 2020. A powerful bomb blast ripped through the Islamic seminary on the outskirts of the northwest Pakistani city of Peshawar on Tuesday morning, killing some students and wounding dozens others, police and a hospital spokesman said. (Photo by Muhammad Sajjad/AP Photo) 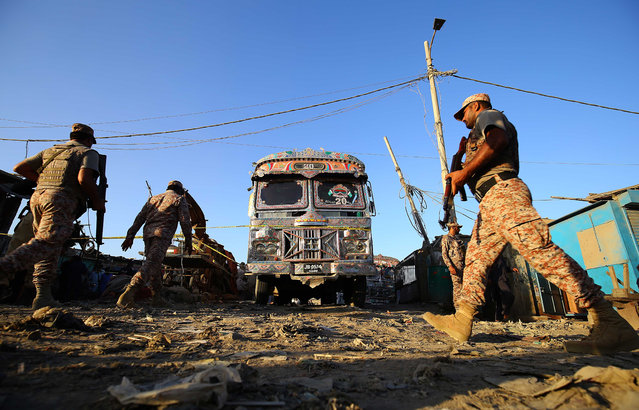 Pakistani security officials inspect the scene of a blast that targeted a passenger bus, in Karachi, Pakistan, 20 October 2020. At least six people were injured in a bomb explosion on a passenger bus in Karachi on 20 October. (Photo by Shahzaib Akber/EPA/EFE) 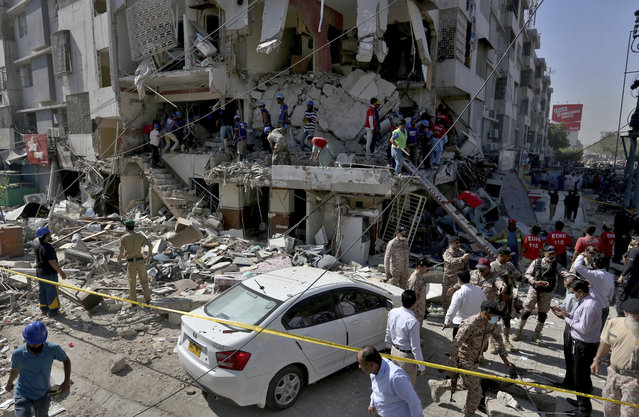 Pakistan's troops and rescue workers look for survivors in the rubble following the explosion, in Karachi, Pakistan, Wednesday, October 21, 2020. Police and rescuers say a powerful blast has ripped through a multistory building in Pakistan’s southern port city of Karachi. (Photo by Fareed Khan/AP Photo) 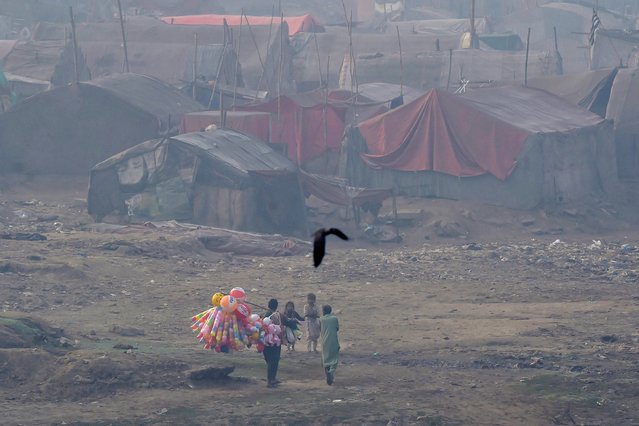 A vendor selling balloons looks for customers in a slum area amid heavy smoggy conditions in Lahore on November 13, 2020. (Photo by Arif Ali/AFP Photo) 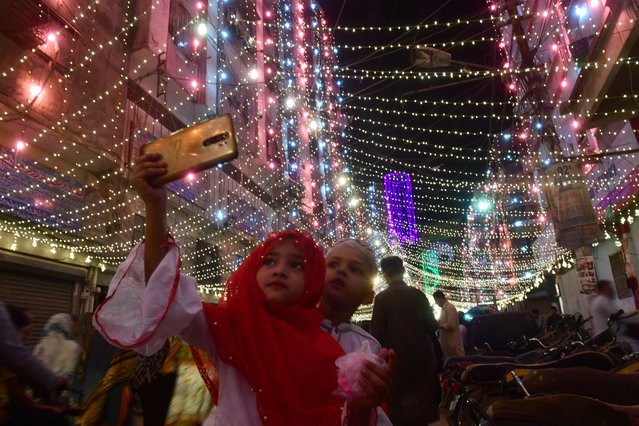 A young girl takes a selfie with her brother in an illuminated street ahead of celebrations for Eid-e-Milad-un-Nabi, the birthday of Prophet Mohammad, in Pakistan port city of Karachi on October 28, 2020. (Photo by Asif Hassan/AFP Photo) 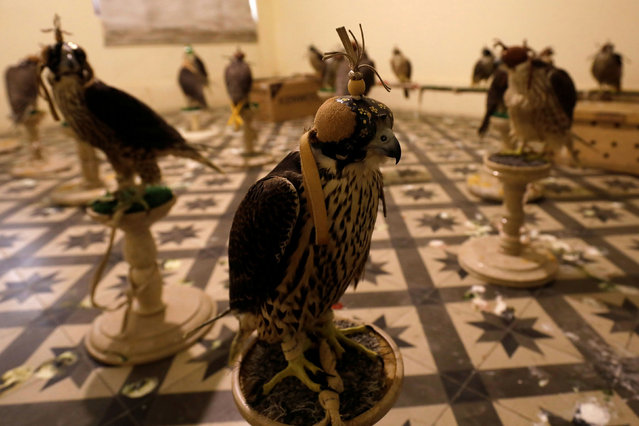 Falcons are seen at the office of the Anti-Smuggling Organisation of Pakistan Customs, after they were seized in Karachi, Pakistan on October 17, 2020. According to a press release by Customs at least seventy-four falcons worth 200 million Pakistani Rupees ($1.2 million) belonging to endangered species under International Convention on Illegal Trade on Endangered Species (CITES) were seized during a raid in Karachi. (Photo by Akhtar Soomro/Reuters) 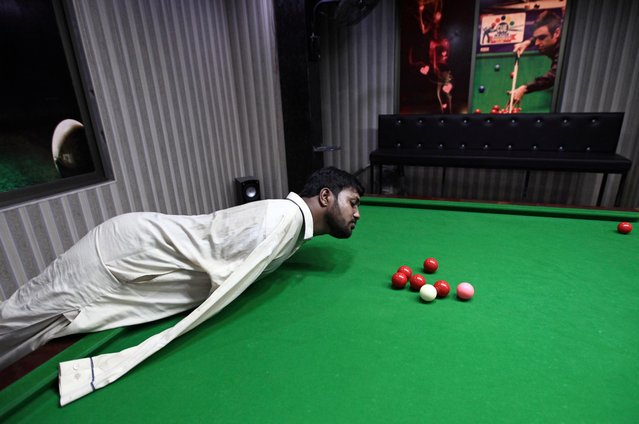 Muhammad Ikram, 32, who was born without arms, plays snooker with his chin at a local club in Samundri, Pakistan, October 20, 2020. (Photo by Mohsin Raza/Reuters) 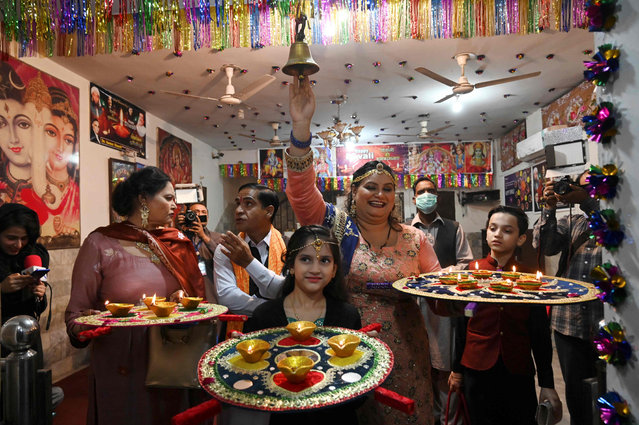 Hindu women hold clay-lamps during a ceremony to celebrate Diwali, the festival of lights, at a Krishna temple in Lahore, Pakistan, Saturday, November 14, 2020. The Hindu festival of lights, Diwali celebrates the spiritual victory of light over darkness. (Photo by Arif Ali/AFP Photo) 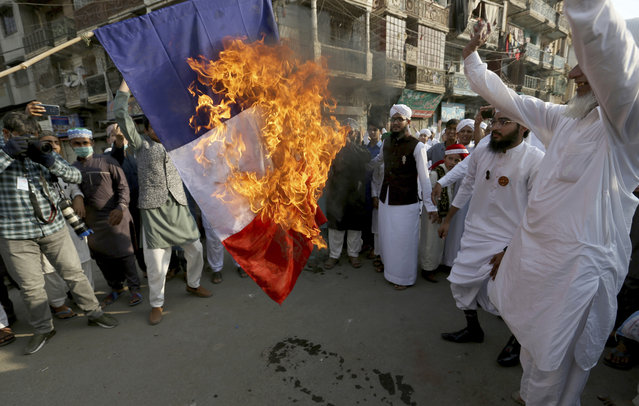 Supporters of religious group burn a representation of a French flag during a rally against French President Emmanuel Macron and republishing of caricatures of the Prophet Muhammad they deem blasphemous, in Karachi, Pakistan, Friday, October 30, 2020. Muslims have been calling for both protests and a boycott of French goods in response to France's stance on caricatures of Islam's most revered prophet. (Photo by Fareed Khan/AP Photo) 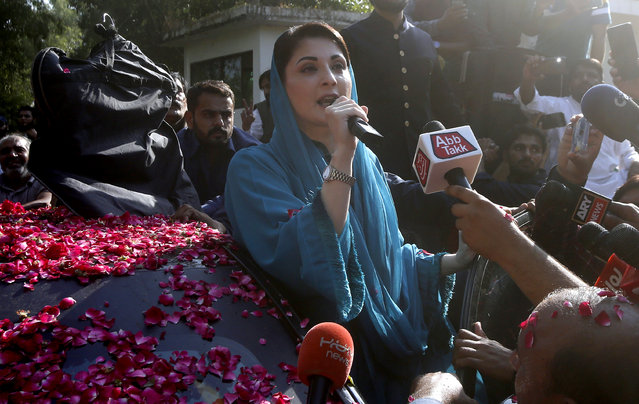 Maryam Nawaz, daughter of former Pakistani Prime Minister Nawaz Sharif and leader of an opposition party, addresses supporters while leaving her home to attend a rally in Lahore, Pakistan, Friday, October 16, 2020. Pakistani opposition parties are staging a rally in the eastern city of Gujranwala to kick off their campaign against Prime Minister Imran Khan to force him step down over what they say is his failure in handling the nation's ailing economy. (Photo by K.M. Chaudary/AP Photo) 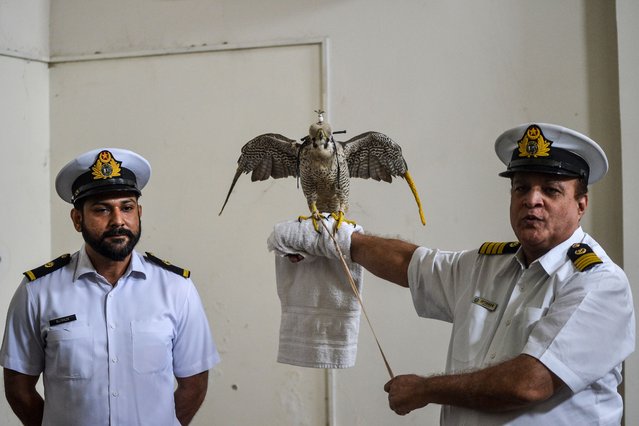 A customs officer (R) holds on his arm a falcon that was recovered from illegal captivity, during a press briefing with customs authorities in Karachi on October 17, 2020. (Photo by Rizwan Tabassum/AFP Photo) 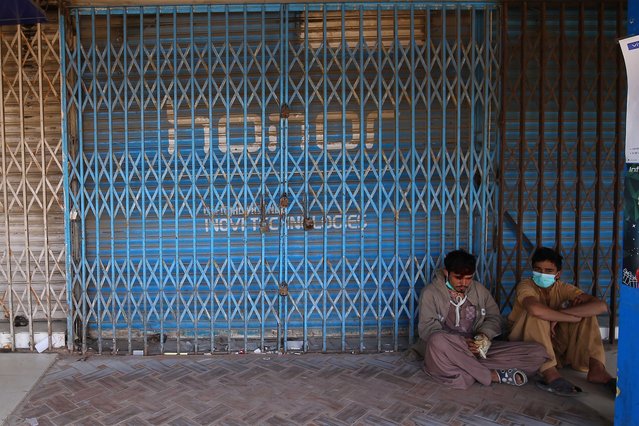 People sit at a closed market that was sealed during smart lockdown after new cases of COVID-19 were reported in Karachi, Pakistan, 02 November 2020. Countries around the world are taking increased measures to stem the widespread of the SARS-CoV-2coronavirus which causes the Covid-19 disease. (Photo by Shahzaib Akber/EPA/EFE) 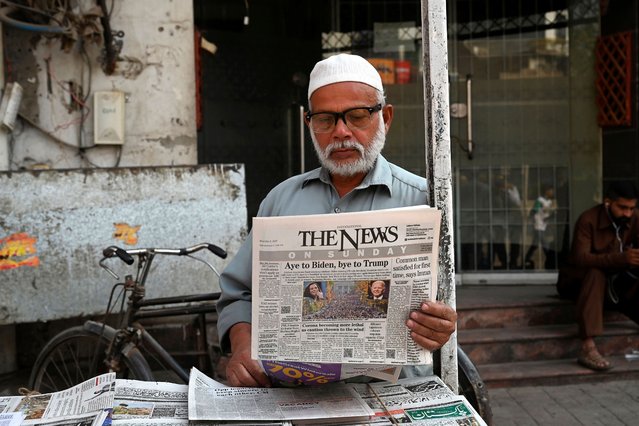 A man reads a morning newspaper showing a photograph of newly elected US President Joe Biden, at a newspaper stall in Lahore on November 8, 2020. (Photo by Arif Ali/AFP Photo) 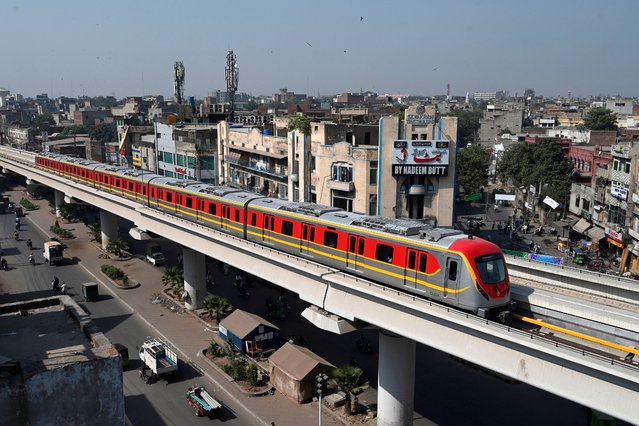 A newly built Orange Line Metro Train (OLMT), a metro project planned under the China-Pakistan Economic Corridor (CPEC), drives through on a track after an official opening in the eastern city of Lahore on October 26, 2020. (Photo by Arif Ali/AFP Photo) A vendor selling facemasks waits for customers on a bridge amid heavy smoggy conditions in Lahore on November 10, 2020. (Photo by Arif Ali/AFP Photo) Muslims hold torch lights during a rally ahead of celebrations for Eid-e-Milad-un-Nabi, the birthday of Prophet Mohammad, in Lahore on October 29, 2020. (Photo by Arif Ali/AFP Photo) 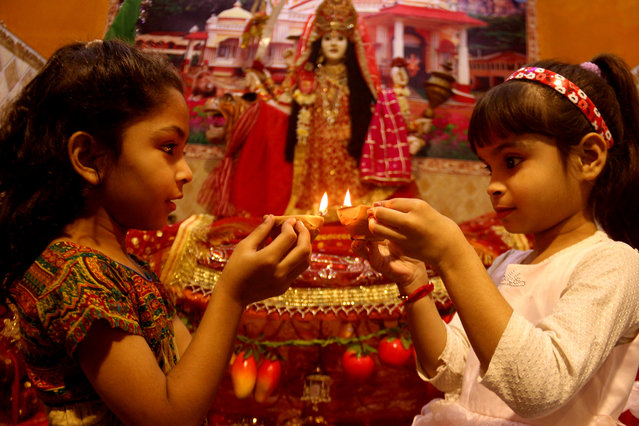 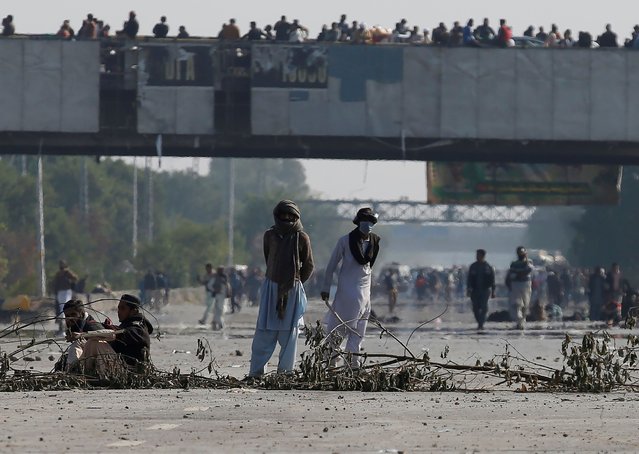 Supporters of “Tehreek-e-Labaik Pakistan”, a religious political party, block a main road during an anti-France rally in Islamabad, Pakistan, Monday, November 16, 2020. The supporters are protesting the French President Emmanuel Macron over his recent statements and the republishing in France of caricatures of the Muslim Prophet Muhammad they deem blasphemous. (Photo by Anjum Naveed/AP Photo) 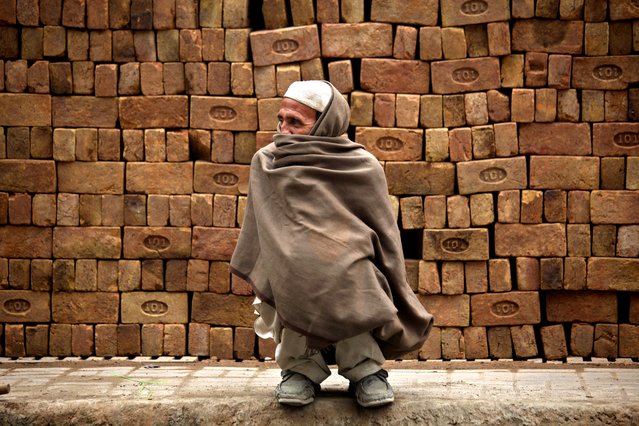 A man covers himselve with traditional shawls to beat the cold weather at a road side as it rains during the winter in Peshawar, Pakistan, 15 November 2020. Reports state that many cities in Pakistan are experiencing unusual cold weather conditions during which regular daytime temperatures fall around five degree Celsius in wide parts of the country. (Photo by Arshad Arbab/EPA/EFE) 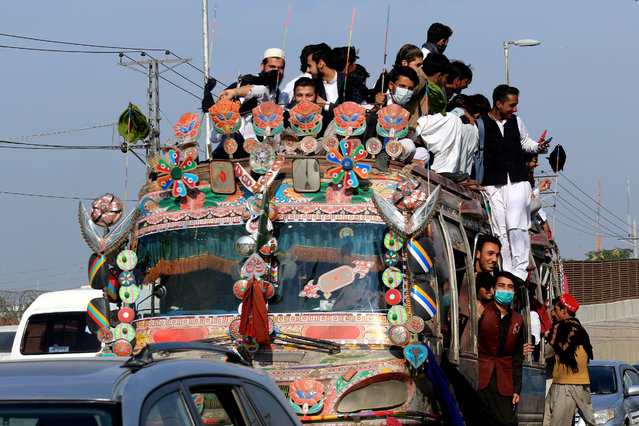 Passengers wears a face mask while riding on a bus after new cases of COVID-19 were reported in Peshawar, Pakistan, 18 November 2020. Countries around the world are taking increased measures to stem the widespread of the Covid-19 disease. (Photo by Arshad Arbab/EPA/EFE/Rex Features/Shutterstock)
Edit Del
25 Nov 2020 00:05:00, post received 0 comments
Publication archive:
←   →
Popular tags:
All tags
Last searches: