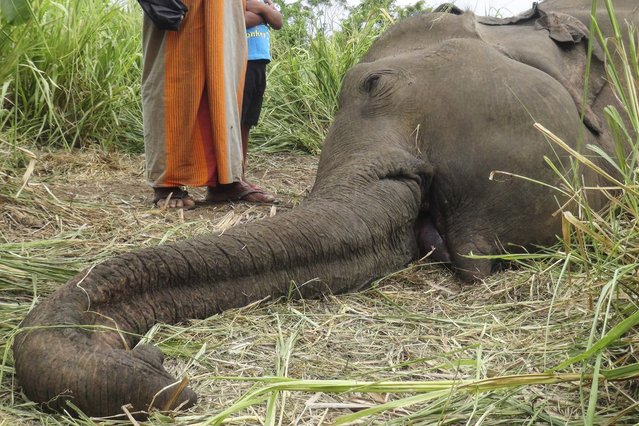 Villagers stand next to the dead body of an elephant laying in a field near Sigiriya village, some 177 kms north of the capital of Colombo on September 27, 2019. Four elephants were found dead on September 27 in central Sri Lanka, with police suspecting the animals were poisoned by angry villagers. Nearly 200 elephants are killed every year on the island, many by farmers after the animals stray onto their land. (Photo by AFP Photo/Stringer) 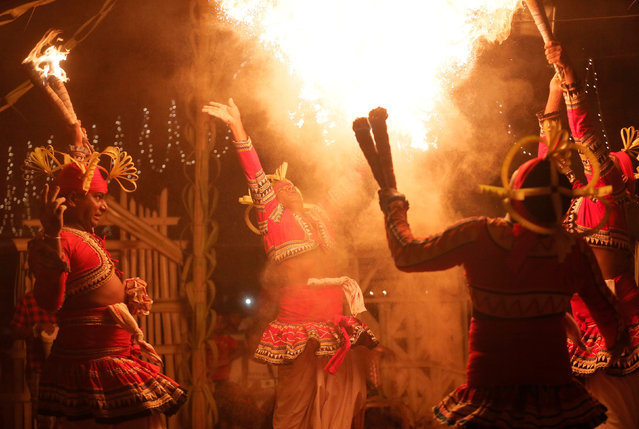 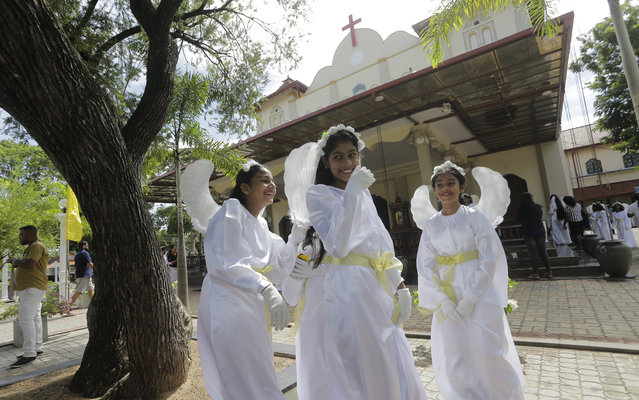 Survivors of the Easter Sunday attacks wait to welcome the Archbishop of Canterbury Justin Welby in Katuwapitiya village, Negombo, Sri Lanka, Thursday, Aug. 29, 2019. The figurehead of the Church of England emphasized the need for Christian unity on Thursday as he paid tribute to the victims of the Easter Sunday bomb attacks at a Roman Catholic church in Sri Lanka. A total of 263 people were killed when seven suicide bombers from a local Muslim group attacked three churches and three luxury hotels on April 21. (Photo by Eranga Jayawardena/AP Photo) 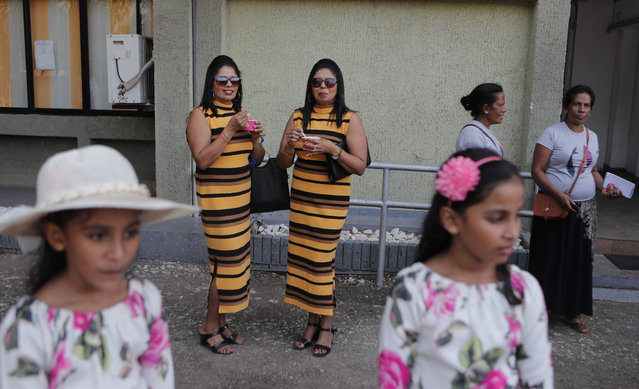 Sri Lankan twins participate in an event organized to attempt setting up a record for the largest twins gathering, in Colombo, Sri Lanka, Monday, January 20, 2020. Sri Lankan Twins, the organizers of the event which was held at a sports complex stadium claim to represent 28,000 twin and multiples. (Photo by Eranga Jayawardena/AP Photo) 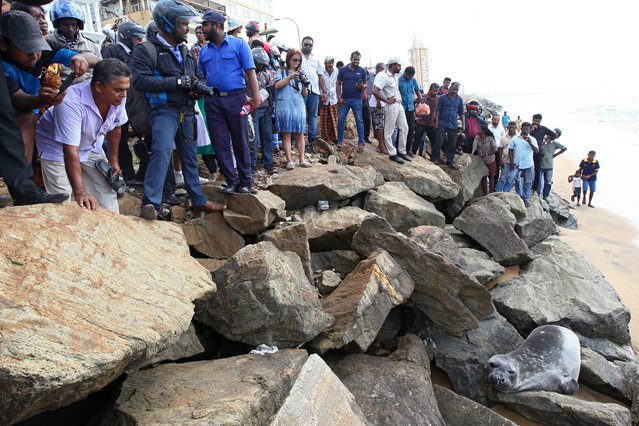 Curious onlookers crowding to catch a glimpse of a Southern Elephant Seal (Mirounga leonina) which landed on the beach at Bambalapitiya in Colombo, Sri Lanka, 12 December 2019. Sightings of Southern Elephant Seals or any species of seals have not been recorded around the seas of Sri Lanka before, according to wildlife authorities. But since November 2019 they have been sighted first on the beaches of the island's southern coast and later closer to Colombo as well. Since seals are a rare sight in the tropical island nation large crowds gathered at each sighting place, prompting authorities and even the Sri Lanka Navy to request people to keep their distance and not disturb the animals. (Photo by Chamila Karunarathne/EPA/EFE) 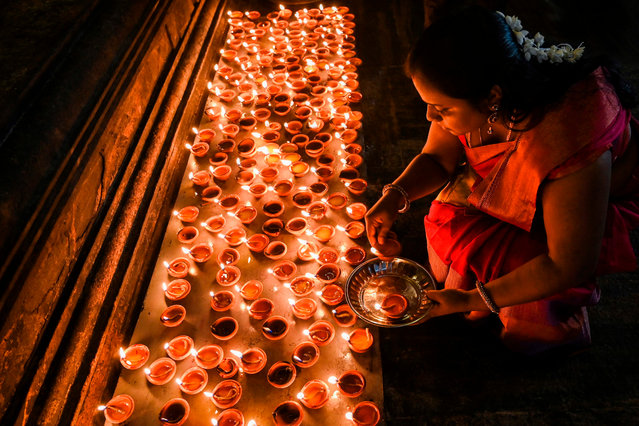 A Hindu devotee lights an oil lamp at a Hindu temple in Colombo, Sri Lanka on January 1, 2020. (Photo by Lakruwan Wanniarachchi/AFP Photo) 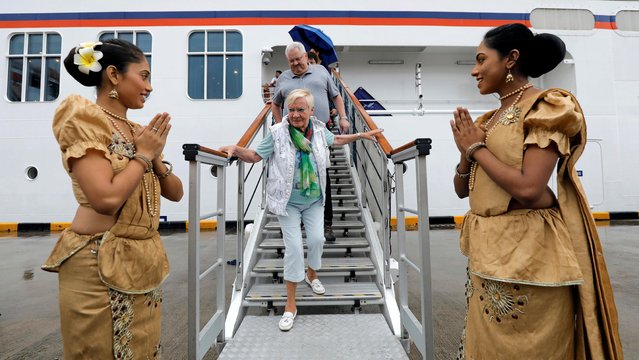 Tourists are welcomed by two Sri Lankan girls as they disembark from MS Europa 2 cruise ship at the main port in Colombo, Sri Lanka on June 7, 2019. (Photo by Dinuka Liyanawatte/Reuters) 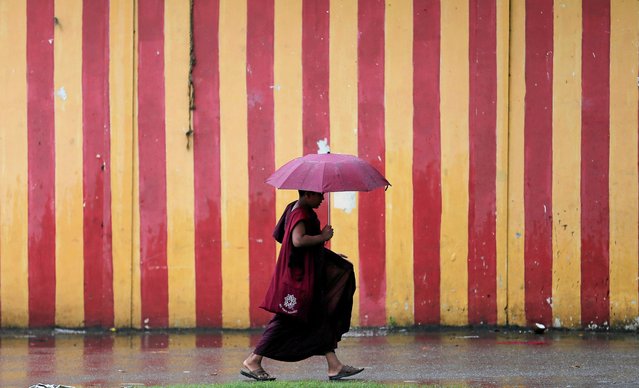 A Buddhist monk walks in the rain during a wet day in Colombo, Sri Lanka on September 25, 2019. (Photo by Dinuka Liyanawatte/Reuters) 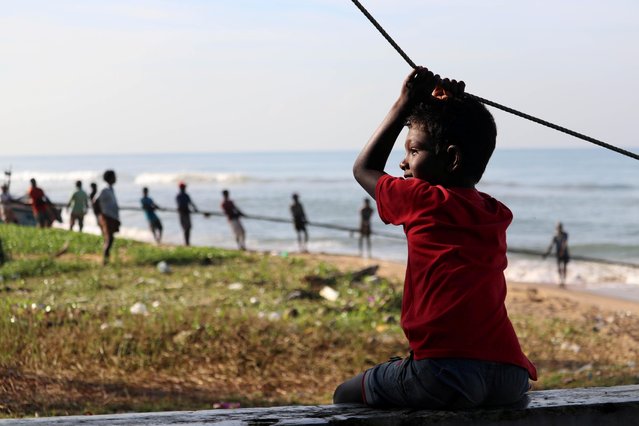 A boy looks on as fishermen pull their fishing net on a beach, in Colombo, Sri Lanka on November 21, 2019. (Photo by Indunil Usgoda Arachchi/Reuters) 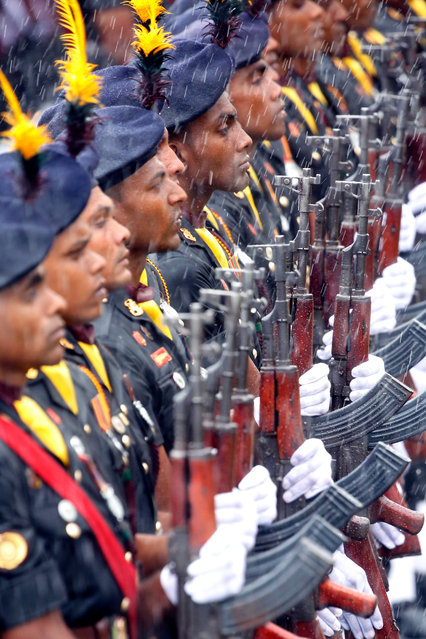 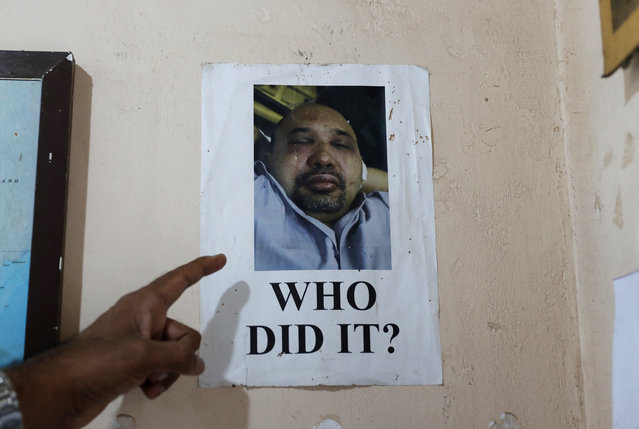 In this November 6, 2019 photo, a portrait of Sri Lankan journalist Keith Noyahr who left the country following an alleged attack by a group of government soldiers is seen pasted on the wall of a human rights activist's office in Colombo, Sri Lanka. Forced to flee their country a decade ago to escape allegedly state-sponsored killer squads, Sri Lankan journalists living in exile doubt they’ll be able to return home soon or see justice served to their tormentors – whose alleged ringleader could come to power in this weekend’s presidential election. Exiled journalists and media rights groups are expressing disappointment over the current government’s failure in punishing the culprits responsible for crimes committed against media members. (Photo by Eranga Jayawardena/AP Photo) 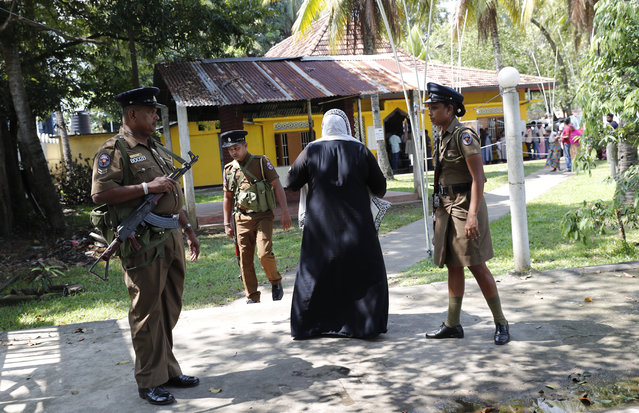 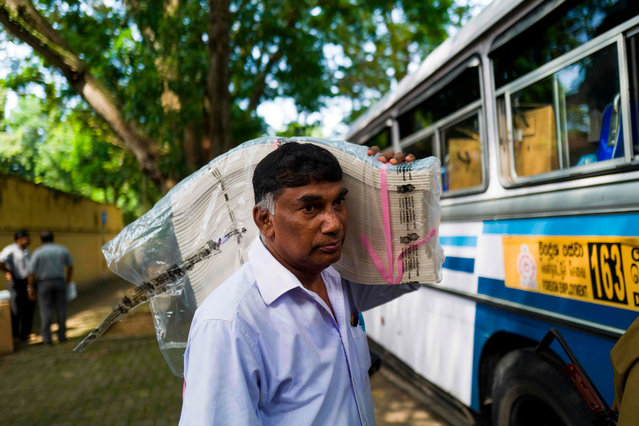 An electoral official carries ballot papers on his shoulder as he boards a bus to go to his respective polling station on the eve of the presidential election, in Colombo on November 15, 2019. (Photo by Jewel Samad/AFP Photo) 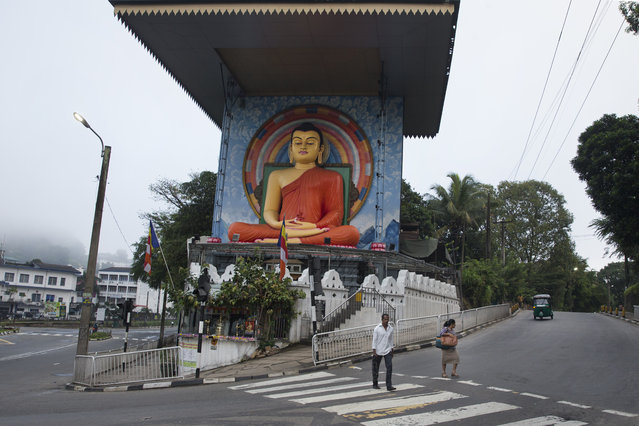 In this November 17, 2019, photo, commuters walk past a statue of Buddha in Kandy, Sri Lanka. In this mountain city that was for centuries home to Sri Lanka’s kings and in recent years has been riven by religious violence, Buddhist nationalists are rejoicing the election of the country’s newest leader. They hope he ushers in another golden era for the nation’s ethnic majority. Buddhist nationalism has been on the rise, and it was thrust to the forefront of Sri Lankan politics after Islamic State-inspired suicide attacks by local militants killed 269 people at churches and hotels on Easter Sunday. (Photo by Dar Yasin/AP Photo) 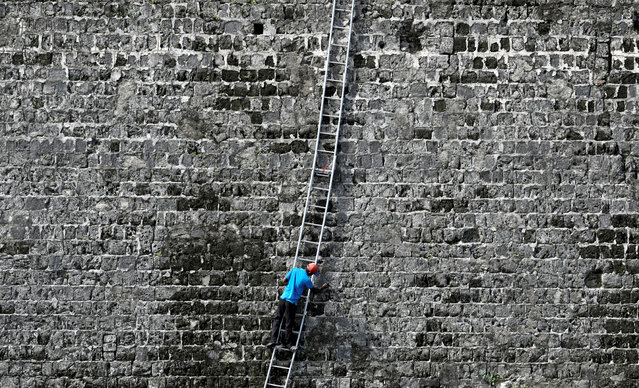 A worker cleans a wall at the Jaffna Fort, a fort built by the Portuguese in 1618, in Jaffna, Sri Lanka on August 25. 2019. (Photo by Dinuka Liyanawatte/Reuters) 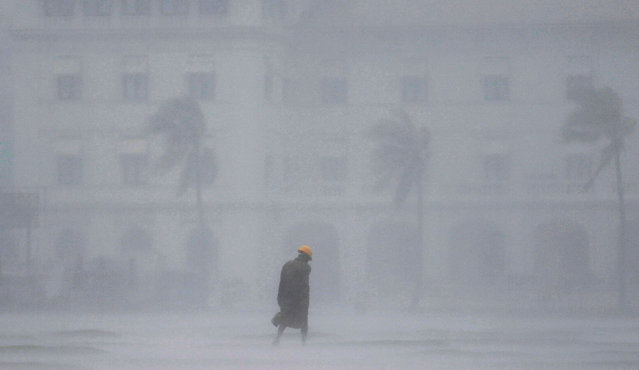 A man walks in heavy rain during a wet day in Colombo, Sri Lanka on September 24, 2019. (Photo by Dinuka Liyanawatte/Reuters) 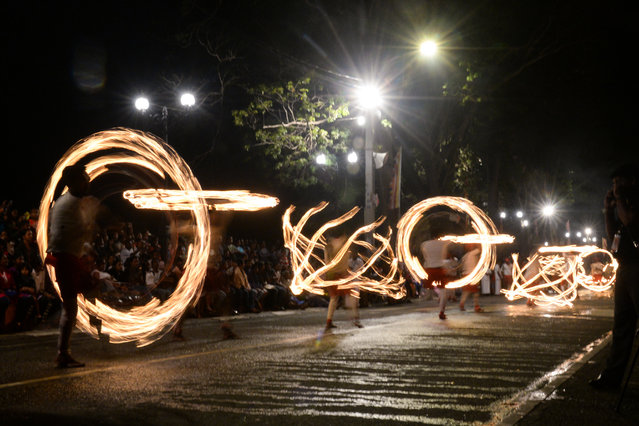 In this photograph taken on August 14, 2019 fire-dancers perform during the “Esala Perahera” festival near the Buddhist temple of the Tooth in the ancient hill capital of Kandy, some 116 kilometres from Colombo. The Temple of the Tooth, Buddhism's holiest shrine on the island, holds the annual festival with traditional drummers and dancers as well as nearly 100 tamed elephants. (Photo by Lakruwan Wanniarachchi/AFP Photo) 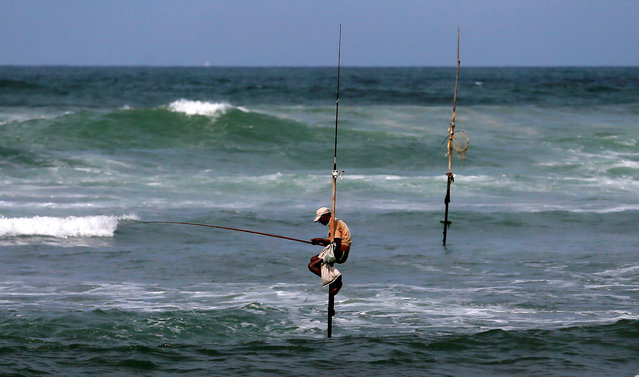 A fisherman waits to catch fish as he sits atop a stilt in the sea in Koggala, Sri Lanka on July 4, 2019. (Photo by Dinuka Liyanawatte/Reuters) 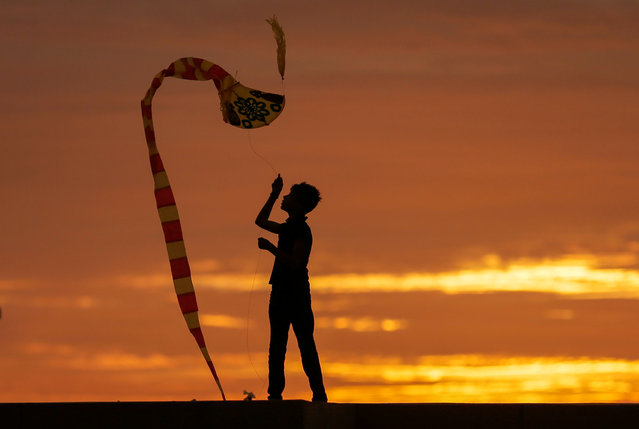 A boy is seen in silhouette as he flies a kite in Colombo, Sri Lanka on December 1, 2019. (Photo by Dinuka Liyanawatte/Reuters) 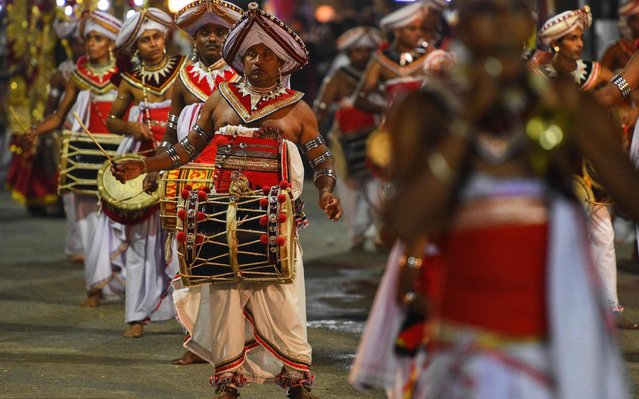 In this photograph taken on January 9, 2020, performers take part in a parade at the annual Perahera festival at the historic Kelaniya Buddhist temple in Kelaniya. Hundreds of devotees and onlookers gathered for the annual elephant pagent, held on the night before the full moon day in January, to commemorate the visit of Lord Buddha to the temple. (Photo by Ishara S. Kodikara/AFP Photo)
Edit Del
11 Feb 2020 00:03:00, post received 0 comments
Publication archive:
←   →
Popular tags:
All tags
Last searches: