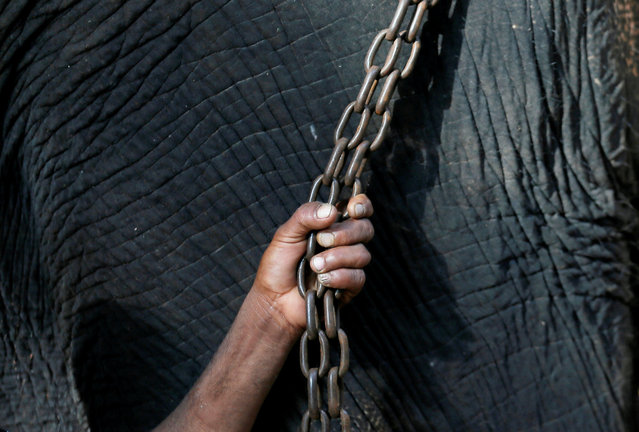 A mahout holds the chain of the temple's elephant during a ceremony as part of the Sinhala, Hindu and Tamil new year celebrations in Colombo, Sri Lanka on April 17, 2019. (Photo by Dinuka Liyanawatte/Reuters) 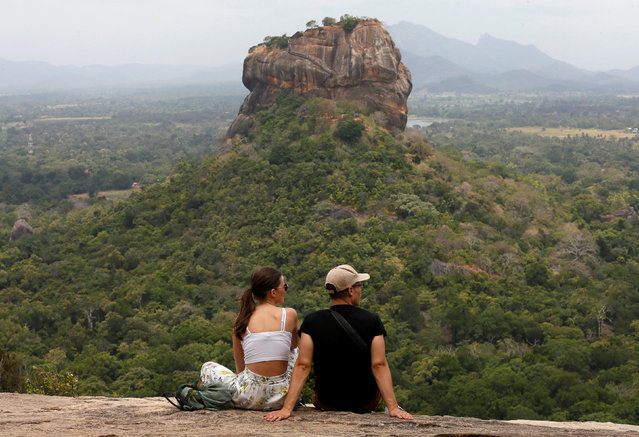 Two tourists rest on top of a rock as the Sigiriya Rock Fortress is seen in front of them, in Sigiriya, Sri Lanka July 30, 2018. (Photo by Dinuka Liyanawatte/Reuters) 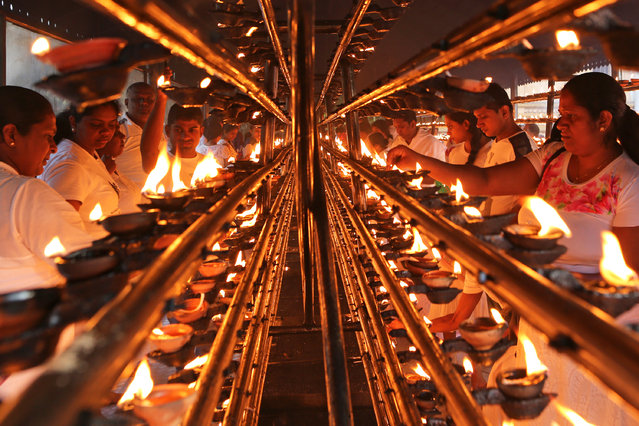 Sri Lankan Buddhist devotees light oil lamps as they mark Poya day or Full Moon Day at a temple on November 22, 2018 in Colombo, Sri Lanka. Buddhists, who make up 60 percent of the country's population, dress in white and perform rituals on Full Moon Day, a public holiday in Sri Lanka. (Photo by Buddhika Weerasinghe/Getty Images) 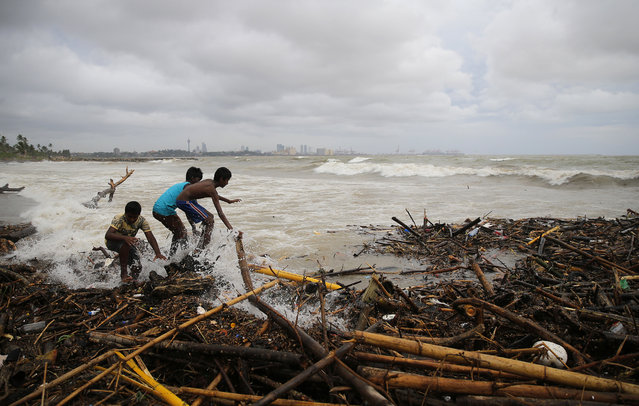 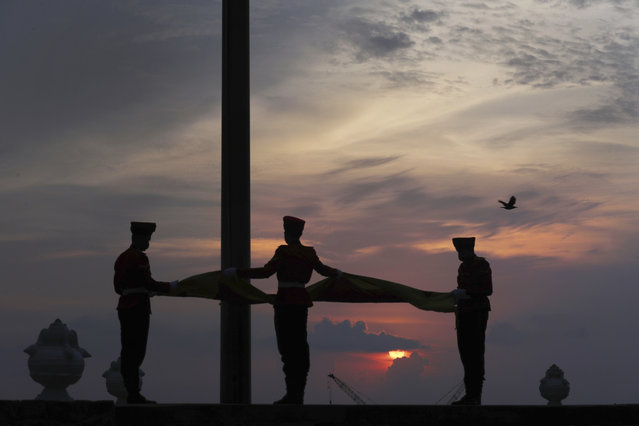 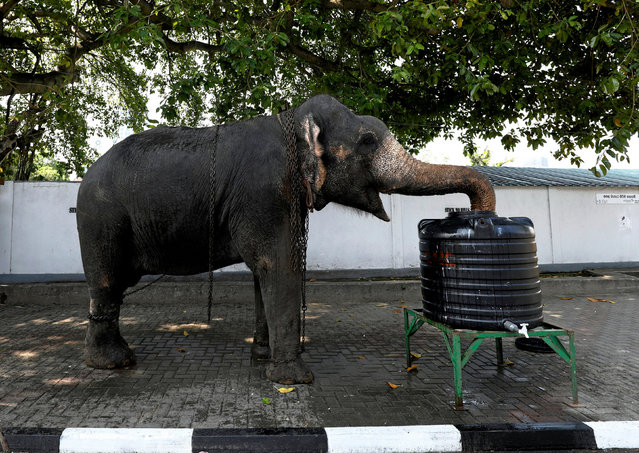 An elephant drinks water before the annual Navam Perahera parade, on the side of a main street in Colombo, Sri Lanka on February 18, 2019. (Photo by Dinuka Liyanawatte/Reuters) 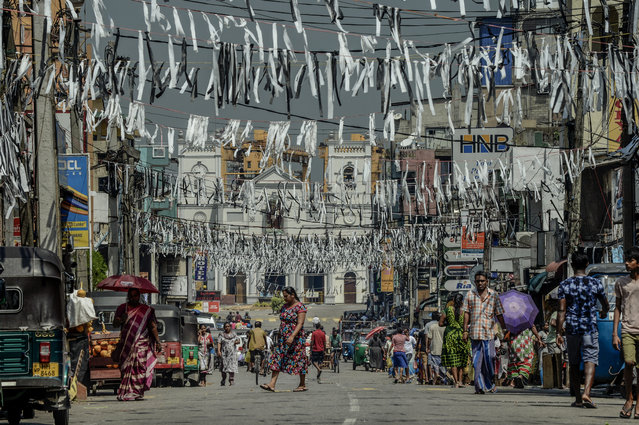 Locals pass funeral ribbons hung across the road leading to St Anthony's Church on April 24, 2019 in Colombo, Sri Lanka. At least 321 people were killed and 500 people injured after coordinated attacks on churches and hotels on Easter Sunday in and around Colombo as well as at Batticaloa in Sri Lanka. According to reports, the Islamic State group have claimed responsibility on Tuesday for the attacks while investigations show the attacks were carried out in retaliation for the Christchurch mosque shootings last month. Police have detained 40 suspects so far in connection with the suicide bombs while the government blame the attacks on local Islamist group National Thowheed Jamath (NTJ). (Photo by Atul Loke/Getty Images) 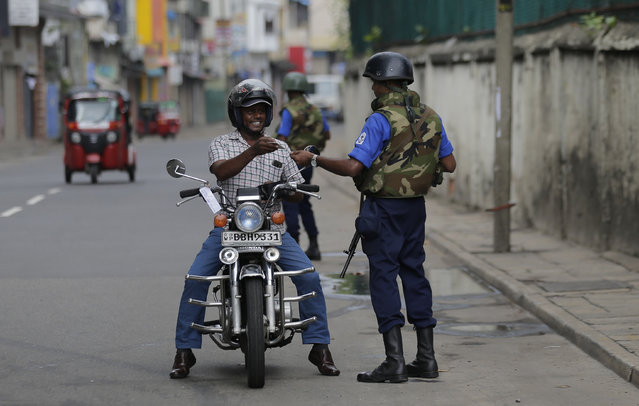 Sri Lankan naval soldiers check the identity of a motorists in Colombo, Sri Lanka, Wednesday, May 1, 2019. Sri Lanka's major political parties called off traditional May Day rallies due to security concerns following the Easter bombings that killed more than 250 people and were claimed by militants linked to the Islamic State group. (Photo by Eranga Jayawardena/AP Photo) 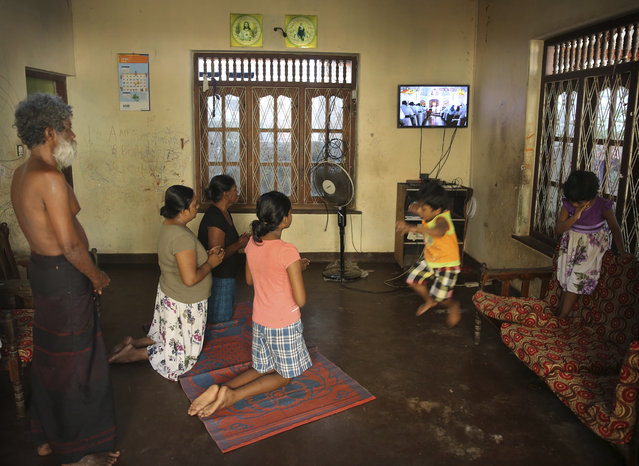 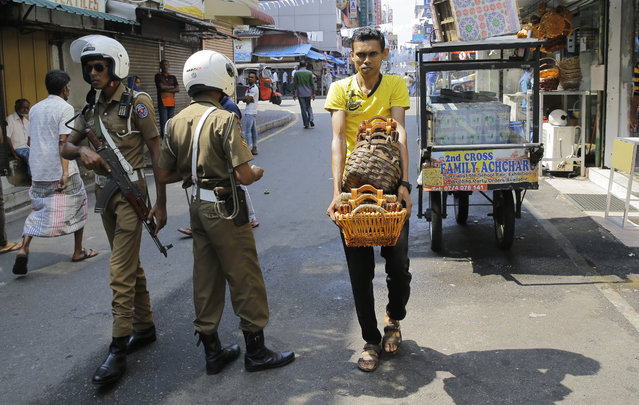 Sri Lankan police officers patrol in a street outside a mosque in Colombo, Sri Lanka, Wednesday, April 24, 2019. The Islamic State group has claimed responsibility for the Sri Lanka attacks on Easter Sunday and released images that purported to show the attackers. Prime Minister Ranil Wickremesinghe said that investigators were still determining the extent of the bombers' foreign links. (Photo by Eranga Jayawardena/AP Photo) 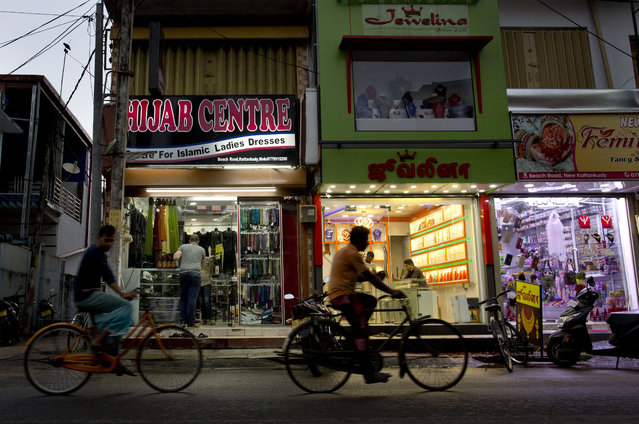 Men ride their bicycles past Hijab Center, a women's clothing shop that sell various garments worn by Muslim women, in Kattankudy, Sri Lanka, Monday, April 29, 2019. After being targeted by Islamic State suicide bombings on Easter, Sri Lanka has banned the niqab face veil, which increasingly has been seen in Muslim areas of the island nation's east. (Photo by Gemunu Amarasinghe/AP Photo) 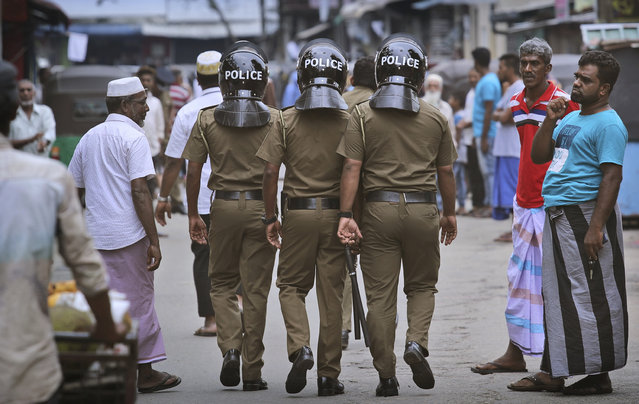 Sri Lankan policeman patrol in a Muslim neighborhood before Friday prayers in Colombo, Sri Lanka, Friday, April 26, 2019. Across Colombo, there was a visible increase of security as authorities warned of another attack and pursued suspects that could have access to explosives. Authorities had told Muslims to pray at home rather than attend communal Friday prayers that are the most important religious service for the faithful. At one mosque in Colombo where prayers were still held, police armed with Kalashnikov assault rifles stood guard outside. (Photo by Manish Swarup/AP Photo) 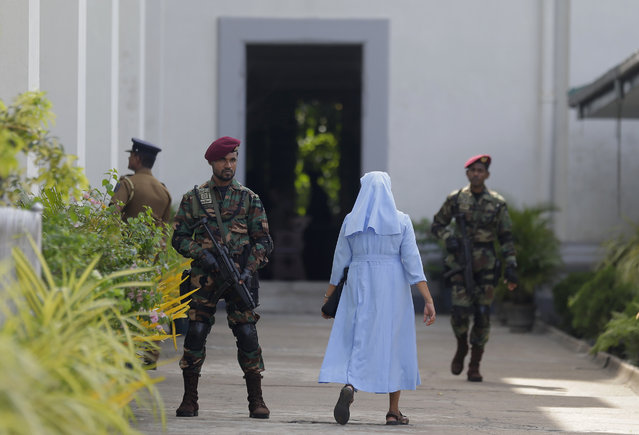 Sri Lankan army commando soldiers secure the St. Lucia's Cathedral during a holy mass held to bless the victims of Easter Sunday attacks in Colombo, Sri Lanka, Saturday, May 11, 2019. In the two Sundays that followed Easter, most churches were closed with armed guards. (Photo by Eranga Jayawardena/AP Photo) 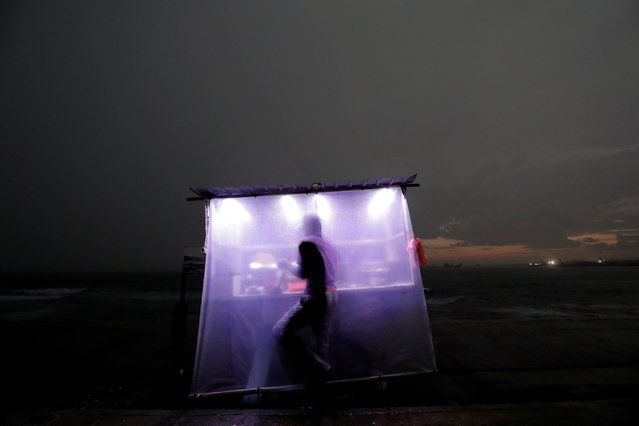 A vendor makes fast food for customers at a mobile cart on a rainy evening in Colombo, Sri Lanka on April 18, 2019. (Photo by Dinuka Liyanawatte/Reuters) 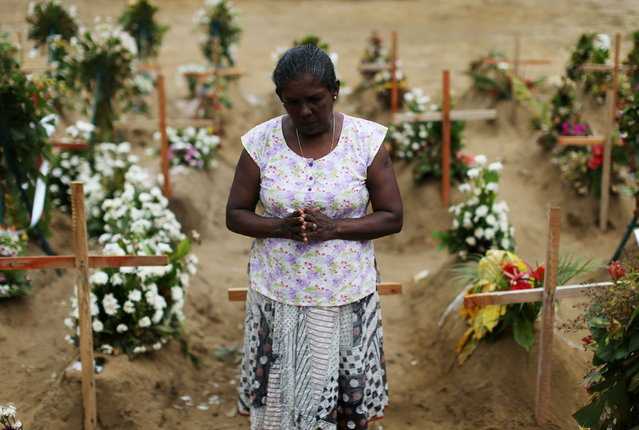 A woman reacts during mass burials near St. Sebastian church in Negombo, Sri Lanka on April 28, 2019. (Photo by Athit Perawongmetha/Reuters) 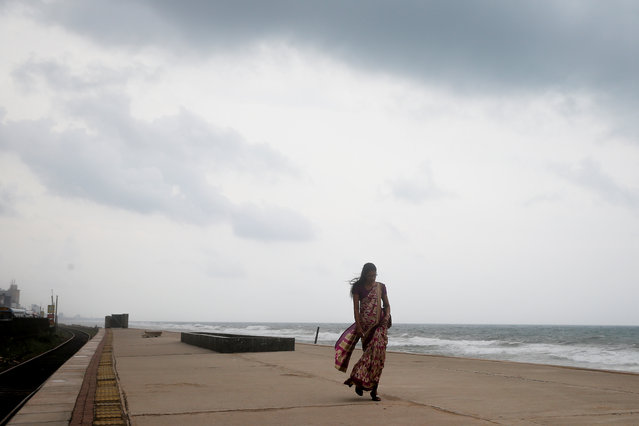 A woman walks along a railway station platform at the ocean front as rain clouds gather over Colombo, Sri Lanka on April 30, 2019. (Photo by Thomas Peter/Reuters) 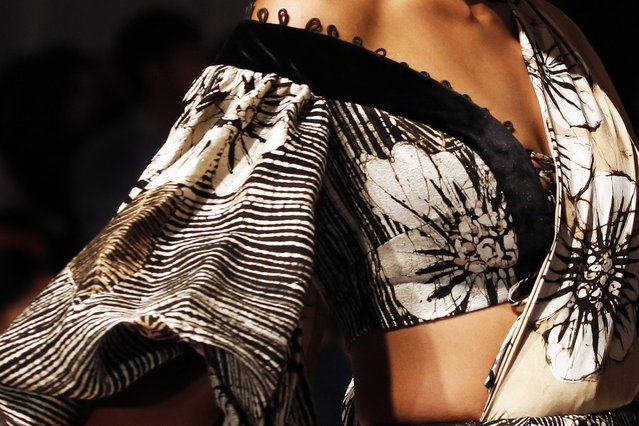 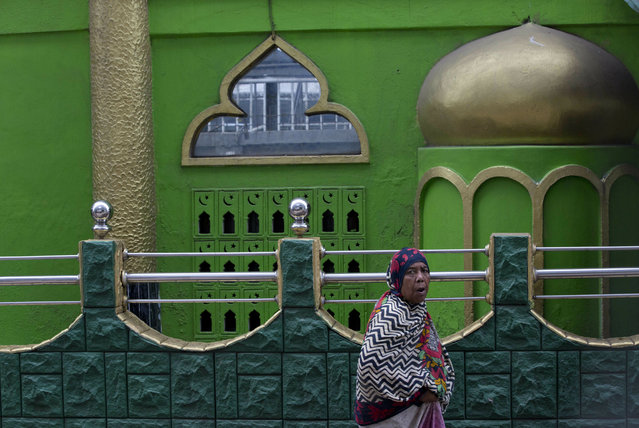 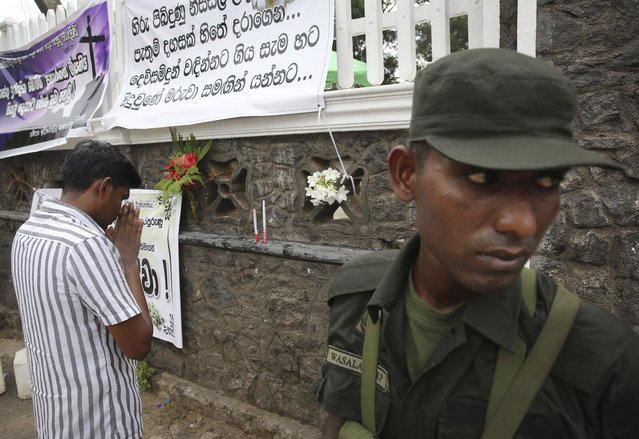 A relative of an Easter Sunday bomb blast victim prays after placing the flowers on the wall of St. Sebastian's Church in Negombo, north of Colombo, Sri Lanka, Sunday, April 28, 2019. Sri Lanka's Catholics celebrated Sunday Mass in their homes by a televised broadcast as churches across the island nation shut over fears of militant attacks, a week after the Islamic State-claimed Easter suicide bombings killed over 250 people. Banner in Sinhalese reads, “those innocents who went to church in the break of the day with thousands of expectations had to depart to the almighty”. (Photo by Manish Swarup/AP Photo) 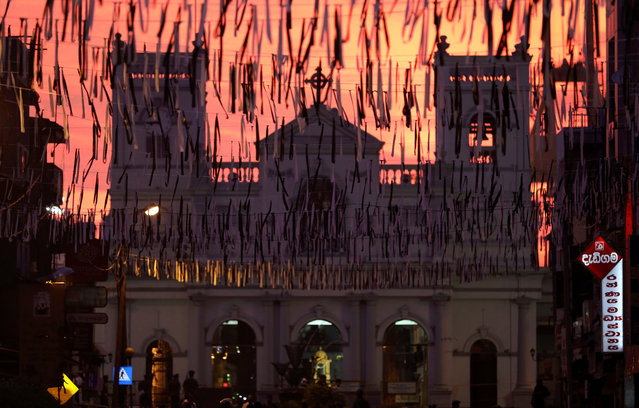 Funeral banners hang across the street in front of St. Anthony's Shrine, days after a string of suicide bomb attacks on churches and luxury hotels across the island on Easter Sunday, in Colombo, Sri Lanka on April 26, 2019. (Photo by Athit Perawongmetha/Reuters) 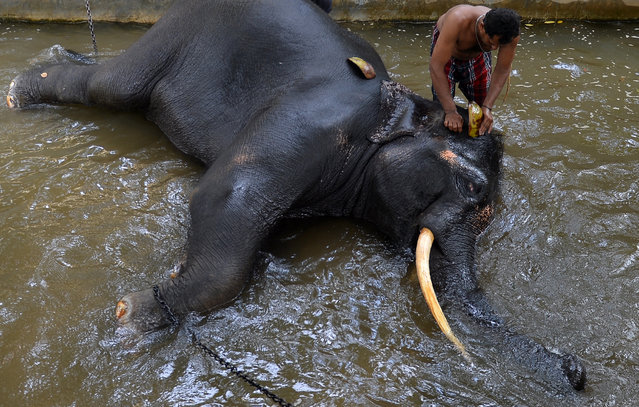 A Sri Lankan mahout washes an elephant in Colombo on August 9, 2018. Sri Lanka on August 8 announced plans to substantially extend electric fencing after marauding elephants killed 375 people in the past five years and villagers retaliated by slaughtering nearly 1,200 of the beasts. (Photo by Lakruwan Wanniarachchi/AFP Photo) 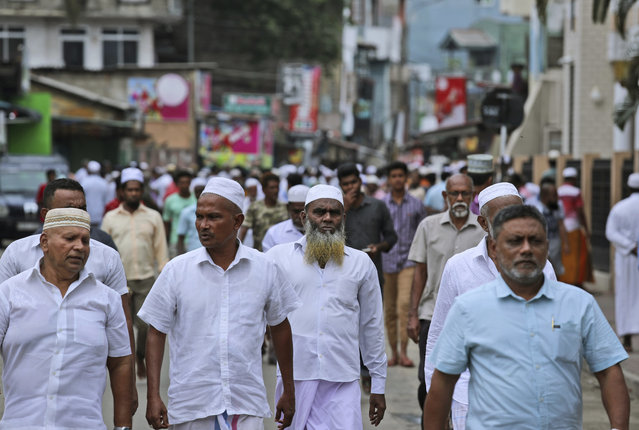 Sri Lankan Muslims leave after offering Friday prayers in Colombo, Sri Lanka, Friday, April 26, 2019. Across Colombo, there was a visible increase of security as authorities warned of another attack and pursued suspects that could have access to explosives. Authorities had told Muslims to pray at home rather than attend communal Friday prayers that are the most important religious service for the faithful. At one mosque in Colombo where prayers were still held, police armed with Kalashnikov assault rifles stood guard outside. (Photo by Manish Swarup/AP Photo) 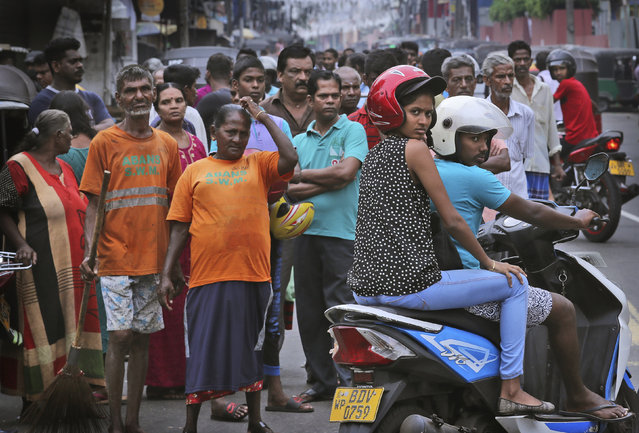 Sri Lankans watch as soldiers clear the debris from inside of the damaged St. Anthony's Church after it was targeted in a series of Islamic State-claimed suicide bombings that killed hundreds of people during Easter Sunday, in Colombo, Saturday, April 27, 2019. On Saturday, cleaning crews arrived to St. Anthony's Shrine in Colombo, where broken glass still littered a blood-stained floor. They collected debris, tossing it into a truck parked outside as a heavy contingent of security forces stood guard. (Photo by Manish Swarup/AP Photo) 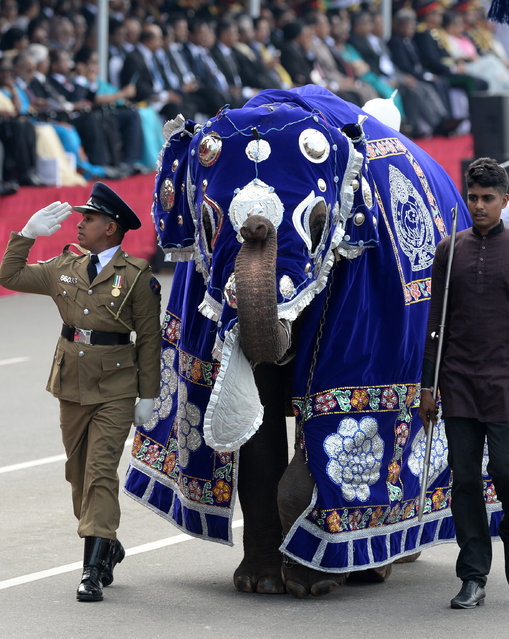 Sri Lankan military personnel march with a baby elephant during the island's 71st Independence Day celebrations in Colombo on February 4, 2019. Sri Lanka is marking the 71st anniversary of independence from Britain on February 4. (Photo by Lakruwan Wanniarachchi/AFP Photo) 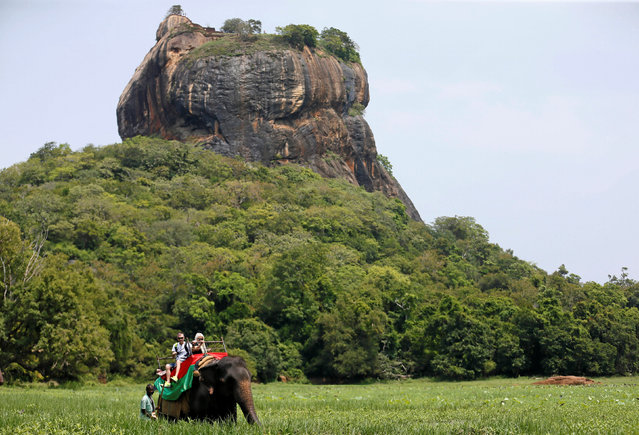 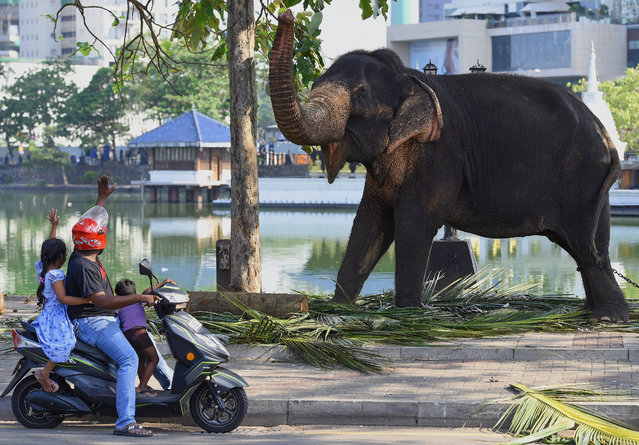 Commuters interact with an elephant as he rests in a public road ahead of the annual Perahera festival of the historic Gangaramaya Temple in Colombo on February 18, 2019. Some 50 elephants, most of them from the central area of Kandy along with thousands of traditional drummers, dancers, and monks have gathered in the Sri Lankan capital to participate in the city's biggest two-day annual Buddhist Navam procession, scheduled for February 18-19. (Photo by Ishara S. Kodikara/AFP Photo) 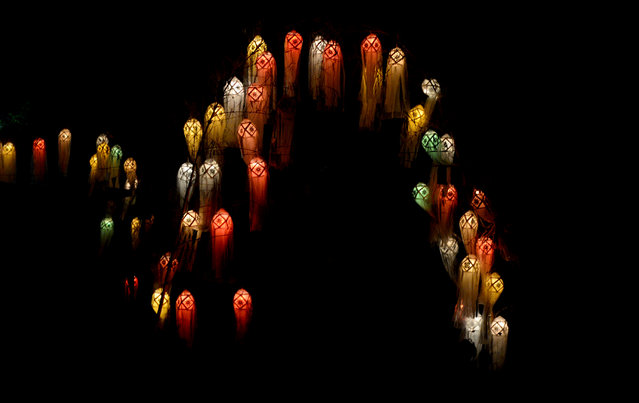 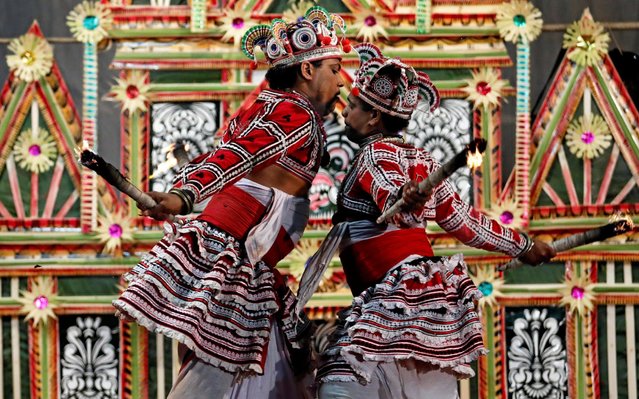