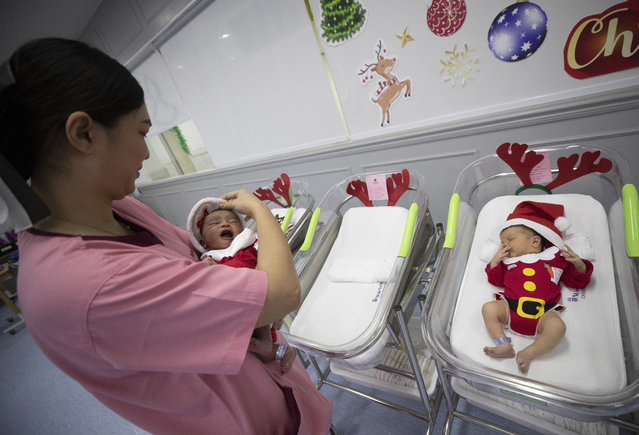 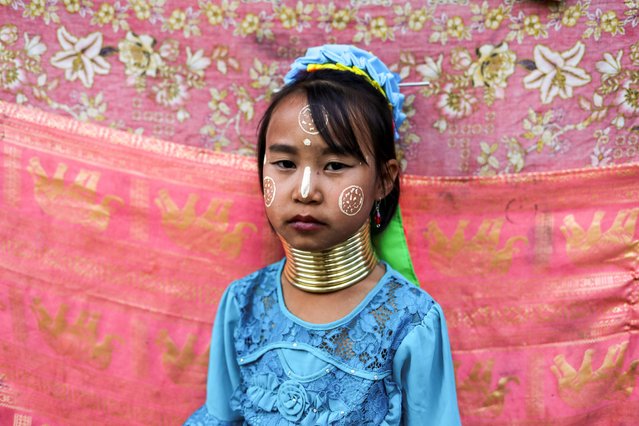 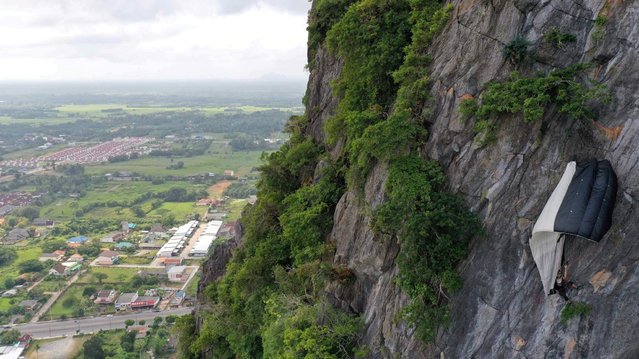 A BASE jumper hangs, snagged from his parachute, after being blown into the Khao Thalu cliff, Khuha Sawan, Mueang Phatthalung District, Thailand on January 13, 2020. (Photo by Freedom Team Drone via Reuters) 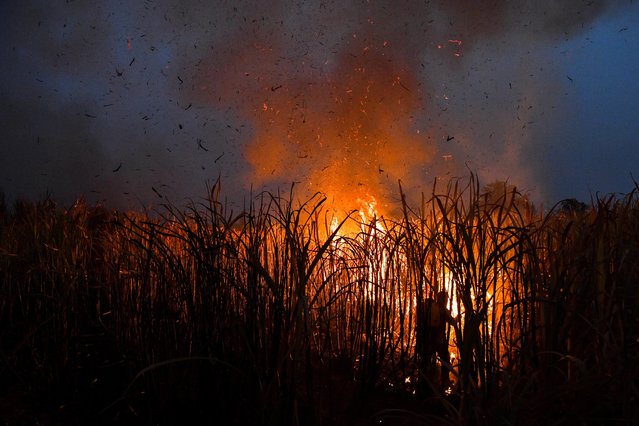 A farmer burns a sugar cane field at night as local growers try to avoid arrest by authorities who banned on the practice to curb smog in Suphan Buri province, north of Bangkok, Thailand, January 20, 2020. (Photo by Chalinee Thirasupa/Reuters) 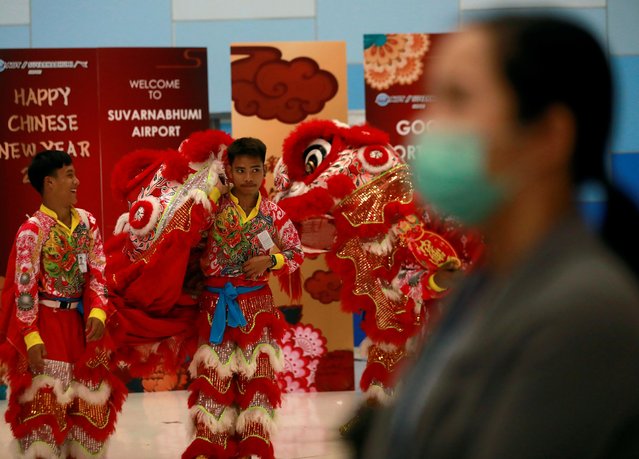 Performers wear costumes for the arrival of Chinese tourists at Suvarnabhumi Airport during a welcome ceremony of Chinese Lunar New Year travellers in Bangkok, Thailand on January 22, 2020. (Photo by Soe Zeya Tun/Reuters) 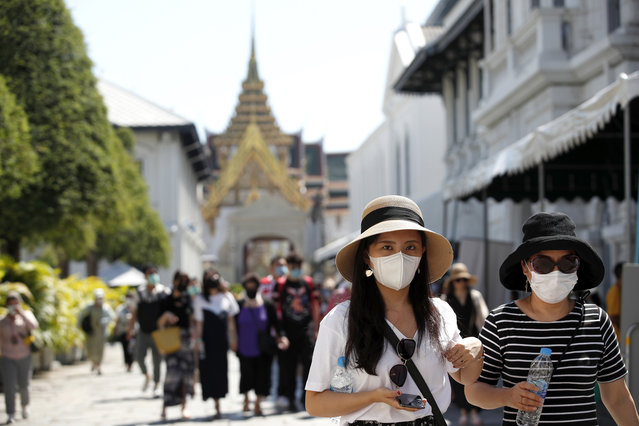 Tourists wear masks as they visit the Grand Palace in Bangkok, Thailand, 27 January 2020. Thai health officials are stepping up monitoring and inspection for the new SARS-like coronavirus after the Public Health Ministry confirmed eight cases in the country. The virus has so far killed at least 80 people and infected around 2,700 others, mostly in China. (Photo by Rungroj Yongrit/EPA/EFE) 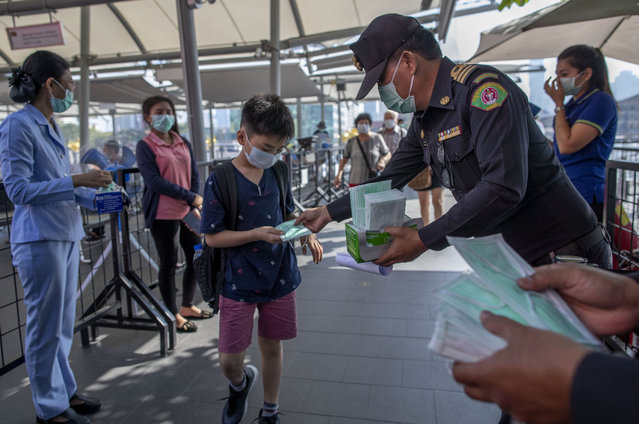 Health officials distribute protective face masks for visitors at a luxury mall in Bangkok, Thailand, Tuesday, January 28, 2020. Panic and pollution drive the market for protective face masks, so business is booming in Asia, where fear of the coronavirus from China is straining supplies and helping make mask-wearing the new normal. (Photo by Gemunu Amarasinghe/AP Photo) 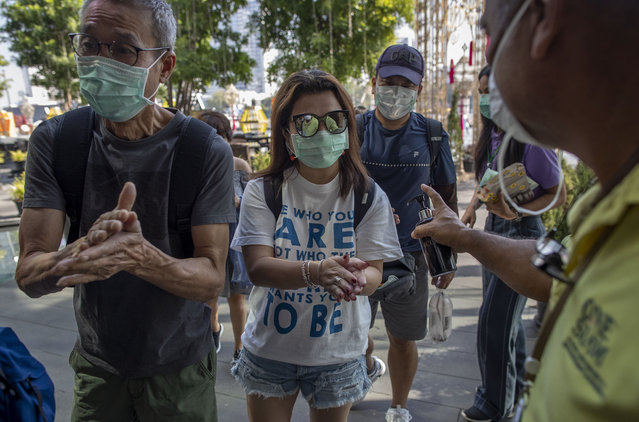 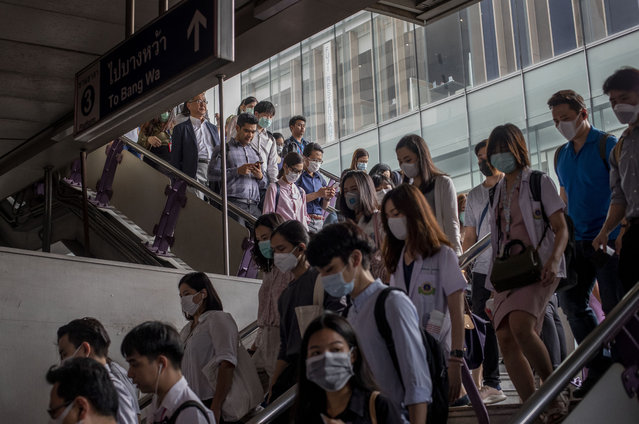 Commuters wear face masks to protect themselves from air pollution and the spreading coronavirus in Bangkok, Thailand, Tuesday, February 4, 2020. On Tuesday, the Korea Centers for Disease Control and Prevention said a 42-year-old South Korean woman tested positive for the virus, days after she returned from a trip to Thailand with chills and other symptoms. (Photo by Gemunu Amarasinghe/AP Photo) 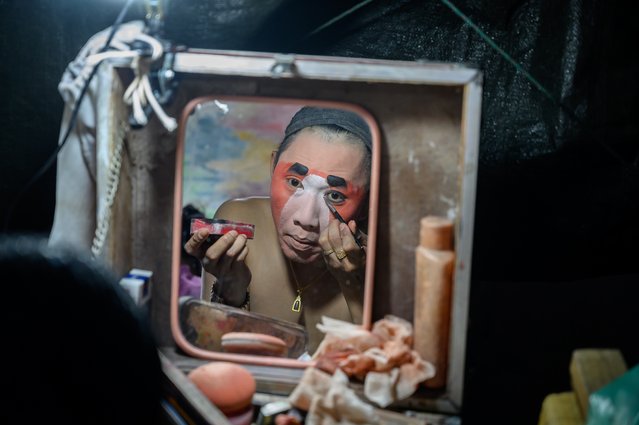 This photograph taken on December 28, 2019 shows a reflection of an actor applying makeup before a Chinese opera performance by Thailand's Sai Bo Hong troupe on a makeshift stage at a street festival in Bangkok. An ancient world of swords, warriors and folklore roars to life on the darkened street, offering a momentary escape from the modern-day bustle of Bangkok's unstoppable development. For centuries, troupes like the Sai Bo Hong Chinese opera have performed throughout Thailand, where 14 percent of the population are ethnic Chinese. (Photo by Mladen Antonov/AFP Photo) 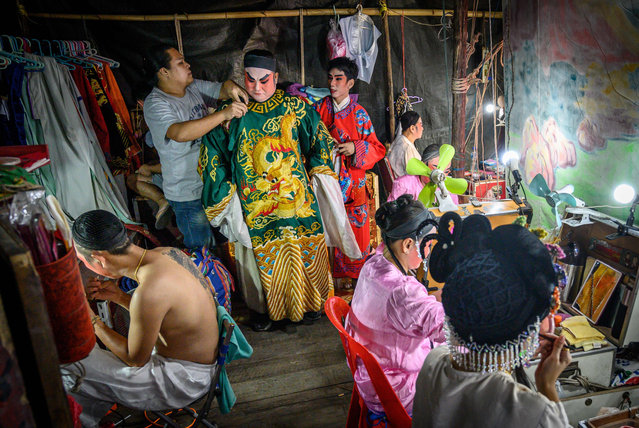 This photograph taken on December 28, 2019 shows actors preparing for a Chinese opera performance by Thailand's Sai Bo Hong troupe on a makeshift stage at a street festival in Bangkok. (Photo by Mladen Antonov/AFP Photo) 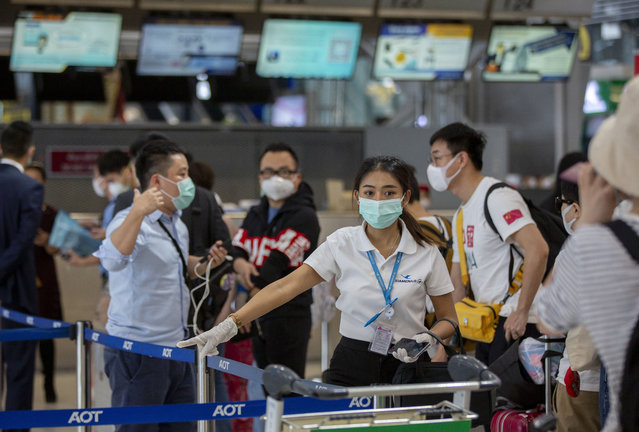 An airline staffer assists tourists from Wuhan, china, as they wait for a charter flight back to Wuhan at the Suvarnabhumi airport, Bangkok, Thailand, Friday, January 31, 2020. A group of Chinese tourists who have been trapped in Thailand since Wuhan was locked down due to an outbreak of new virus returned to China on Friday. (Photo by Gemunu Amarasinghe/AP Photo) 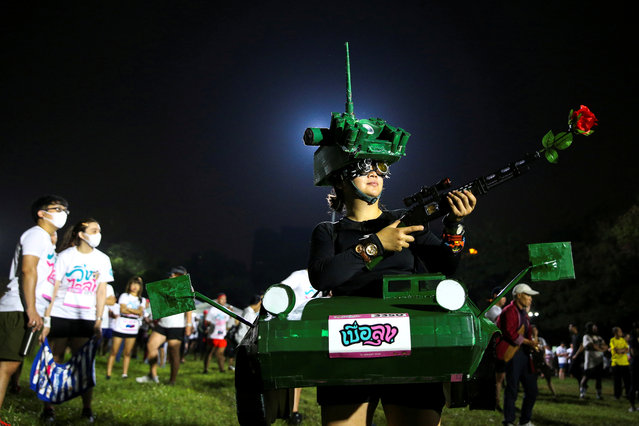 A runner dressed in a tank costume takes part in the “Run Against Dictatorship” event at a public park in Bangkok, Thailand, January 12, 2020. (Photo by Athit Perawongmetha/Reuters) 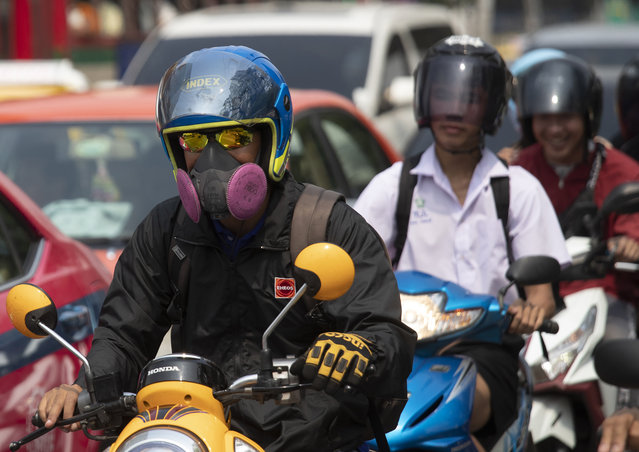 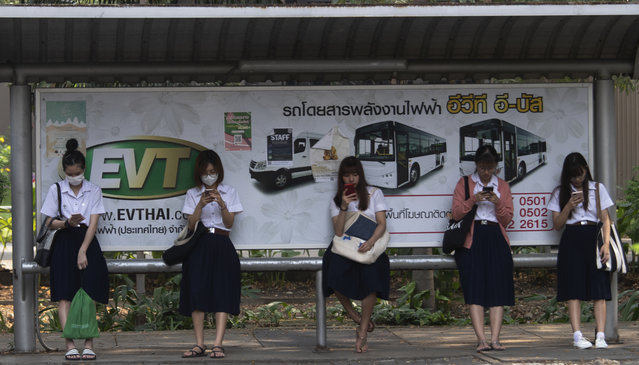 Students from Chulalongkorn University wear face masks to protect themselves from poor air quality as they wait at a bus stop in Bangkok, Thailand, Monday, January 20, 2020. (Photo by Sakchai Lalit/AP Photo) 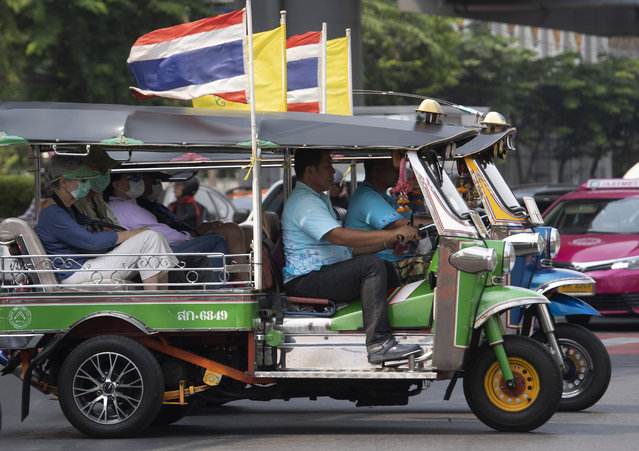 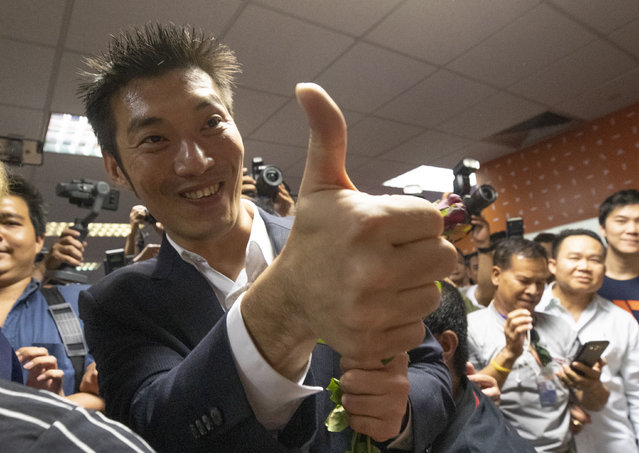 Thailand's Future Forward Party leader Thanathorn Juangroongruangkit gestures to supporters at the party's headquarters in Bangkok, Thailand, Tuesday, January 21, 2020. Thailand's Constitutional Court acquitted the country's third-biggest political party of seeking the overthrow of the country's constitutional monarchy. The court ruled Tuesday that the Future Forward Party showed no intention of committing the offense, and that the complaint had not been filed according to the correct legal procedure. (Photo by Sakchai Lalit/AP Photo) 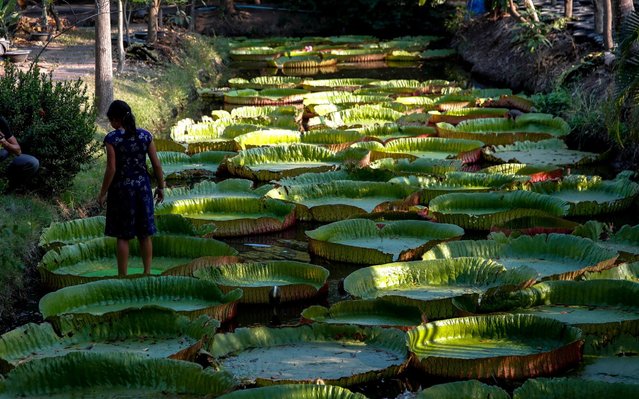 A young girl stands on a Victoria Amazonica water lily at Suan Malai Victoria Water Lily garden on the outskirts of Bangkok, Thailand, 29 December 2019. Located on the outskirts of Thailand's capital, Suan Malai Victoria Water Lily pond welcomes visitors to stroll around the garden and enjoy the hundreds of giant lilies that fill these ponds. Native to the shallow waters of the Amazon River basin, the Victoria Amazonica is the world's largest water lily, and at Suan Malai, young visitors weighing up to 40kg can stand on a water lily fitted with a piece of eva foam to protect the leaves. The leaves of the Giant Lilies, also known as Victoria Amazonica water lilies, can grow up to 3 meters in diameter and support the weight of an adult person. The lilies are mainly an ornamental plant although can fetch a high price. Suan Malai Victoria Water Lily, sells small 4 month old lilies for 500 baht (15 euro). (Photo by Diego Azubel/EPA/EFE/Rex Features/Shutterstock) 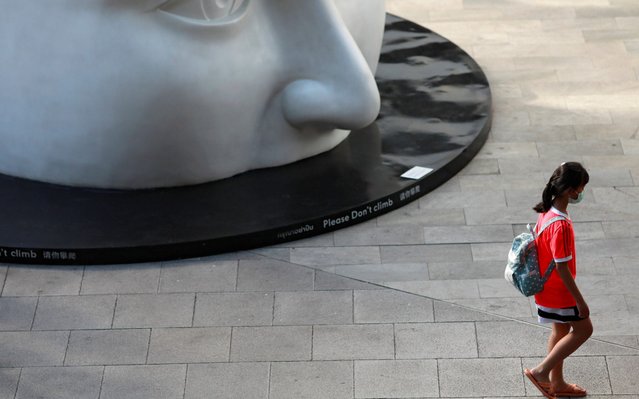 A girl wears a mask to prevent the spread of the new coronavirus in Bangkok, Thailand on January 28, 2020. (Photo by Soe Zeya Tun/Reuters) 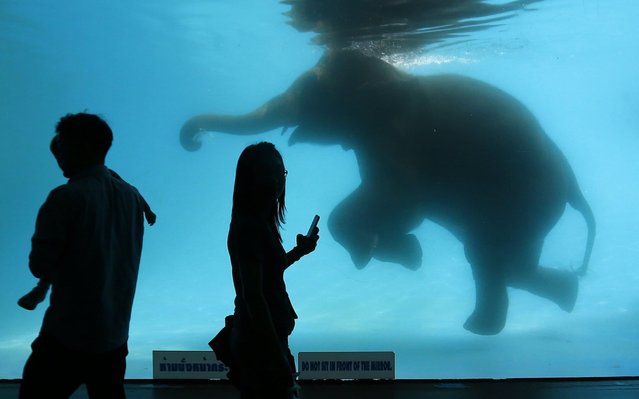