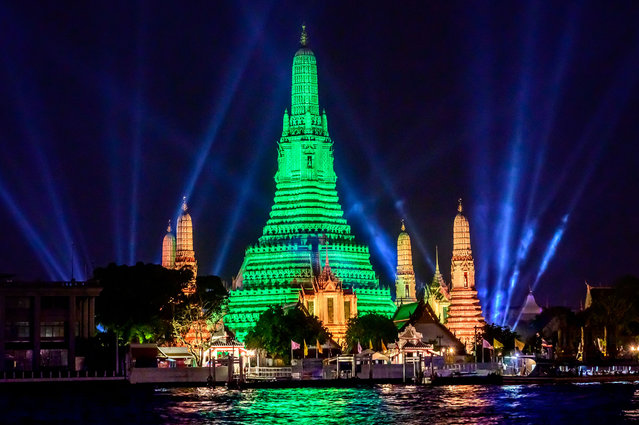 The stupa of the Buddhist temple Wat Arun (Temple of Dawn) is illuminated in green to mark St. Patrick's Day in Bangkok on March 17, 2021. (Photo by Mladen Antonov/AFP Photo) 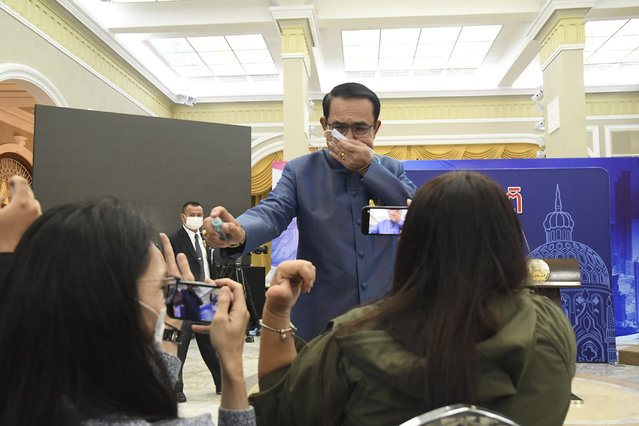 Thailand's Prime Minister Prayuth Chan-ocha sprays alcohol mist on a front row of reporters sitting inside the press conference room at Government house in Bangkok, Thailand, Tuesday, March 9 , 2021. Riled by a final question about a possible Cabinet reshuffle, the prime minister told reporters to mind their own business, then grabbed a container of alcohol mist and doused the front row before sauntering off. (Photo by AP Photo/Stringer) 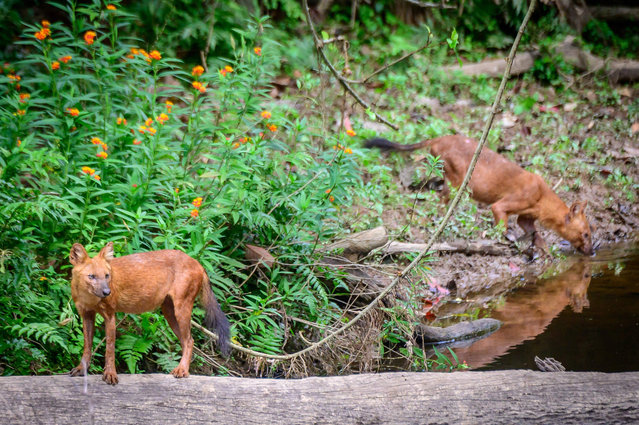 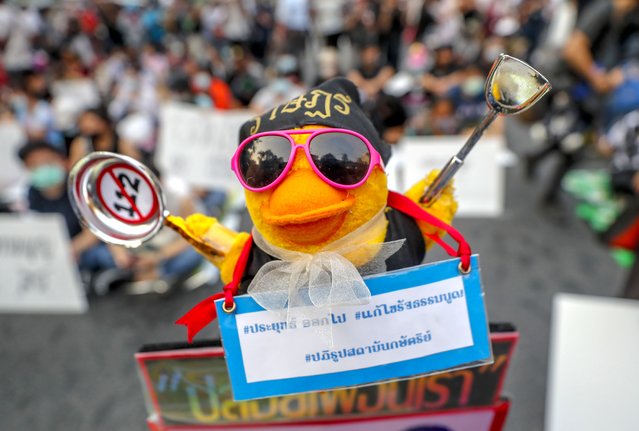 A yellow toy duck, a recent symbol of pro-democracy protesters, has a scarf with a message attached during a rally in Bangkok, Thailand, Wednesday, March 24, 2021, ahead of an indictment against 13 protest leaders on Thursday for allegations of sedition and defaming the monarchy. Message translates as “Prayuth get out, the constitution to be amended, the monarchy's reform”. (Photo by Sakchai Lalit/AP Photo) 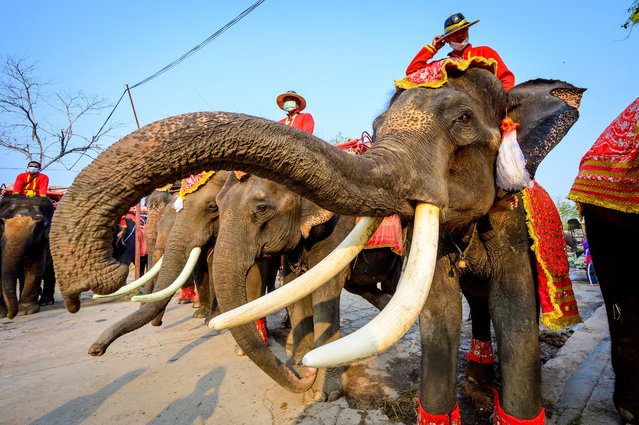 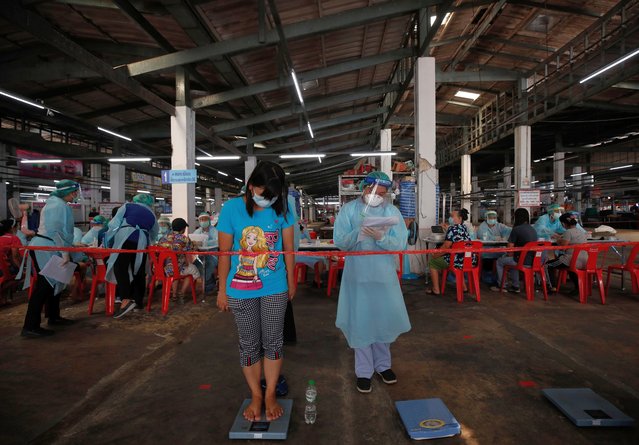 A woman has her weight measured by a medical worker prior to receiving a shot of CoronaVac vaccine against COVID-19, developed by China's Sinovac Biotech, during a mass vaccine inoculation as an effort to curb the spread of a COVID-19 pandemic cluster, at Bang Khae Market in Bangkok, Thailand, 17 March 2021. The Bangkok Metropolitan Administration starts its mass COVID-19 vaccine inoculation for 6,000 people in Bang Khae district to prevent the spread of disease after a new virus cluster was detected that spread hundreds of infections so far. (Photo by Rungroj Yongrit/EPA/EFE) 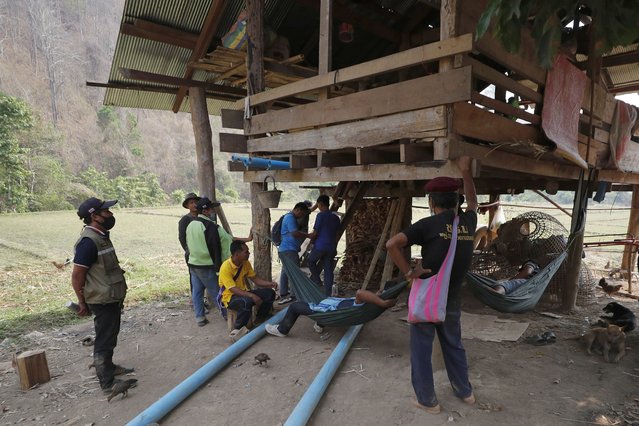 Thai villagers visit a checkpoint of the Thai Rangers in Mae Sakoep village in Mae Hong Son province, Thailand, Monday, March 29, 2021, where people from neighboring Myanmar arrived after they had fled from their homes, following airstrikes by Myanmar's military. (Photo by Sakchai Lalit/AP Photo) 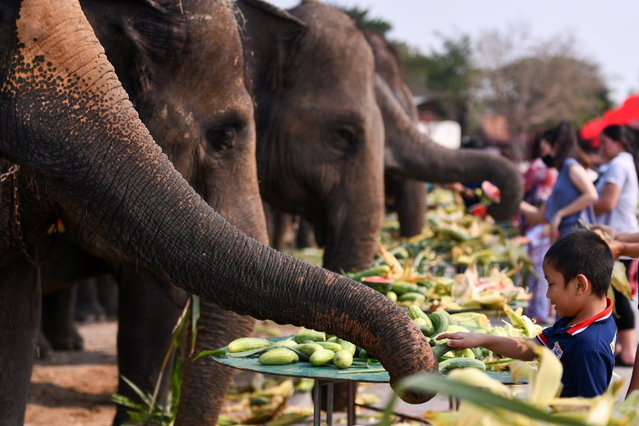 A child feeds an elephant during Thailand's National Elephant Day celebration in the ancient city of Ayutthaya, Thailand, March 13, 2021. (Photo by Chalinee Thirasupa/Reuters) 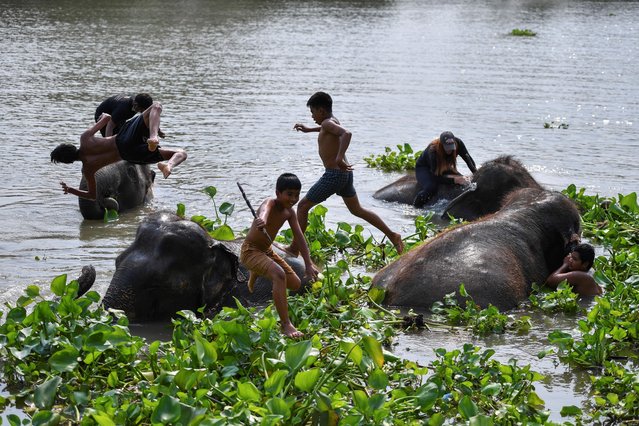 Young mahouts play with elephants in the Chao Phraya River after the celebrations of Thailand's National Elephant Day in the ancient city of Ayutthaya, Thailand, March 13, 2021. (Photo by Chalinee Thirasupa/Reuters) 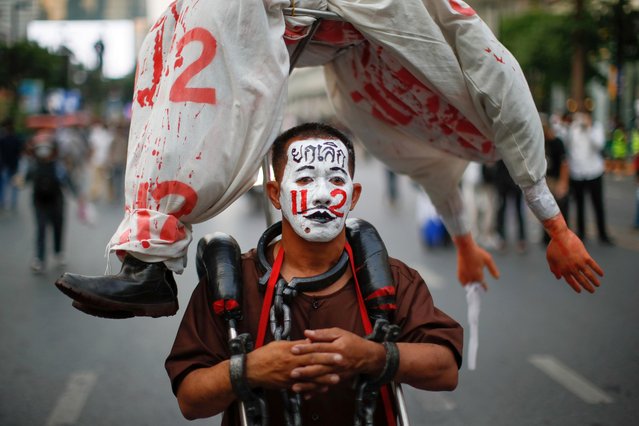 A pro-democracy protester with a painted face participates in a rally demanding the release of arrested protest leaders and the abolition of 112 lese majeste law, in Bangkok, Thailand, March 24, 2021. (Photo by Jorge Silva/Reuters) 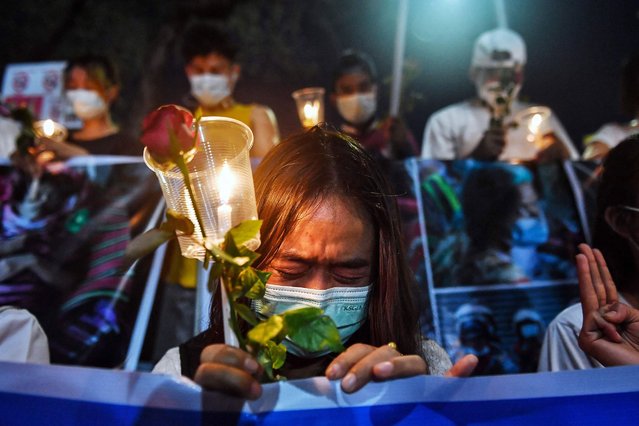 A Myanmar migrant living in Thailand cries during a memorial in Bangkok on March 4, 2021 to honour those who died during demonstrations against the military coup in their homeland. (Photo by Lillian Suwanrumpha/AFP Photo) 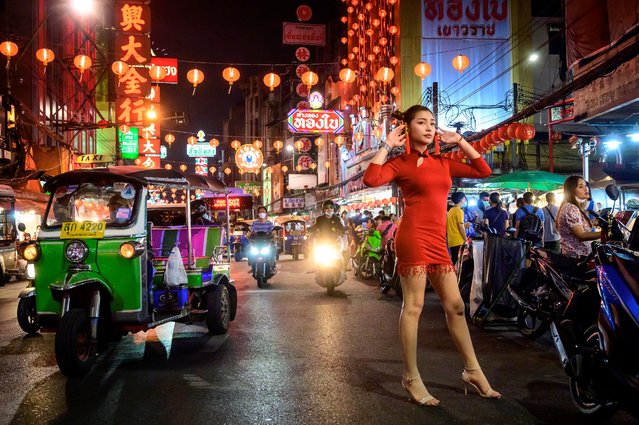 A woman poses for a photo on a street decorated for the fore coming Lunar New Year in Bangkok's Chinatown on February 9, 2021. (Photo by Mladen Antonov/AFP Photo) 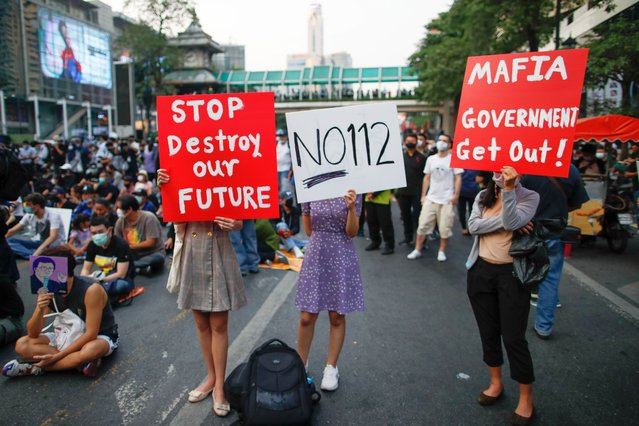 Pro-democracy protesters hold signs during a rally demanding the release of arrested protest leaders and the abolition of 112 lese majeste law, in Bangkok, Thailand, March 24, 2021. (Photo by Jorge Silva/Reuters) 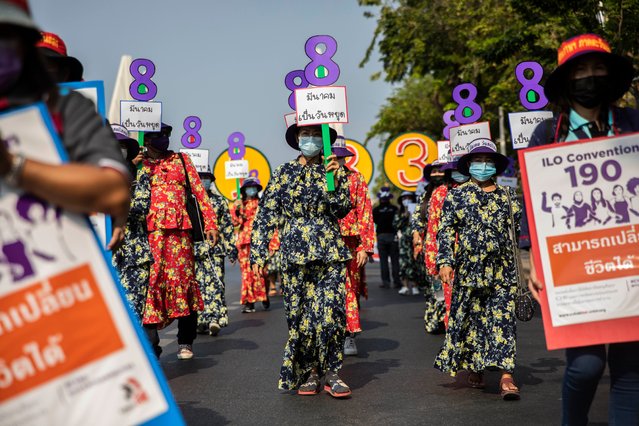 Women rally for maternity rights and workers rights while holding up signs in the shape of the number 8 to commemorate international women's day on March 08, 2021 in Bangkok, Thailand. Members of Thai labor unions and women's networks march from Democracy Monument to Government House calling for women workers rights and maternity rights on International Women's Day. The demonstration aimed to draw attention to the International Labor Organization's C190 and C183, which are laws concerning harassment and violence in the workplace and maternity protection. (Photo by Lauren DeCicca/Getty Images) 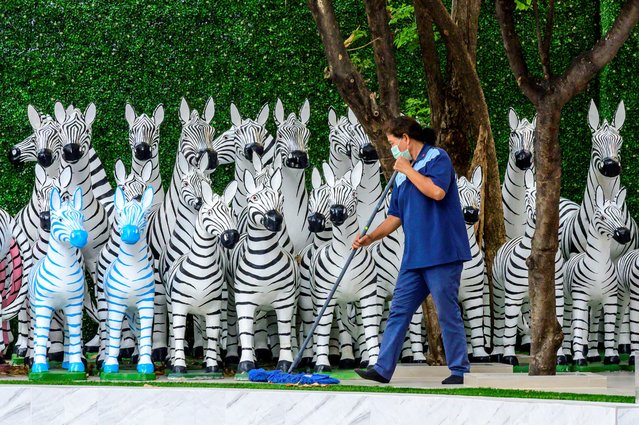 An employee sweeps the ground in front of zebra figures installed outside a health clinic in Bangkok on February 16, 2021. (Photo by Mladen Antonov/AFP Photo) 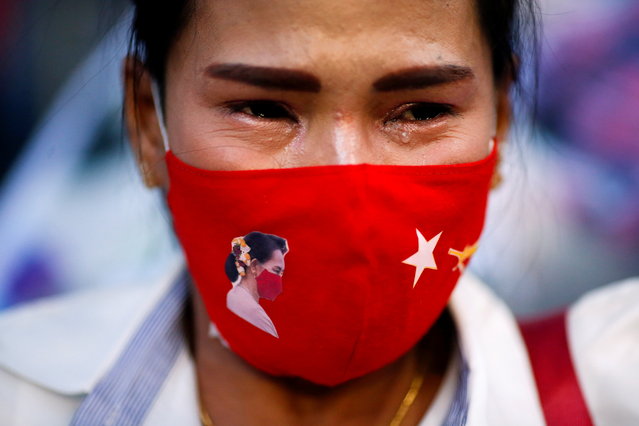 A woman cries during a prayer ceremony for those who died in Myanmar during anti-coup protests, in front of the U.N. building in Bangkok, Thailand on March 4, 2021. (Photo by Soe Zeya Tun/Reuters) 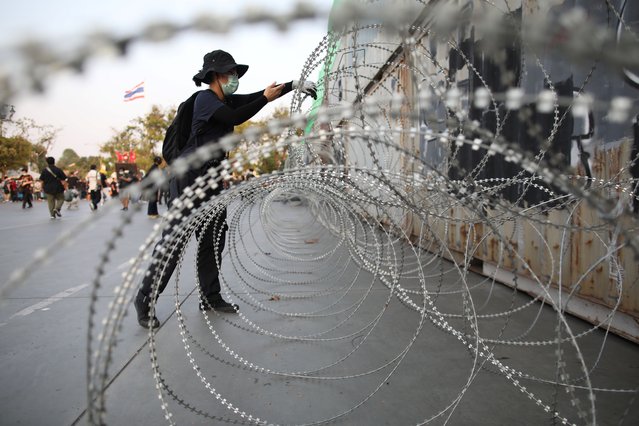 A person sets up barbed wire along containers blocking a road near the Grand Palace ahead of the anti-government protest, demanding resolutions of the government and reforms in the monarchy, in Bangkok, Thailand, March 20, 2021. (Photo by Soe Zeya Tun/Reuters) 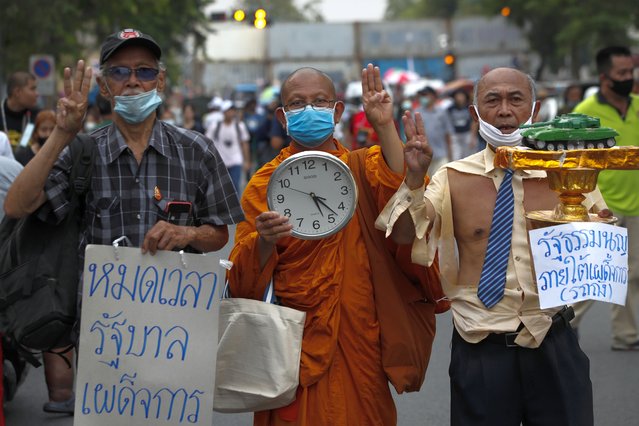 A Thai Buddhist monk (C) joins a rally calling to revoke the lese majeste law and release jailed protest leaders in Bangkok, Thailand, 13 March 2021. Thai police have arrested core protest leaders and some demonstrators on charges of lese majeste and sedition over their demonstrations calling to reform the monarchy. Thailand has been facing political turmoil amid months-long street protests calling for political and monarchy reforms. (Photo by Diego Azubel/EPA/EFE) 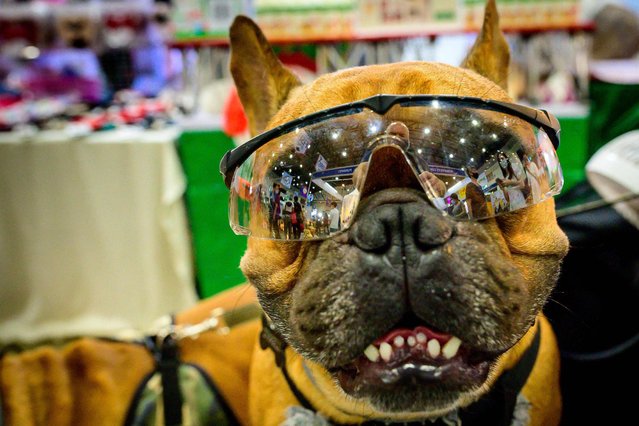 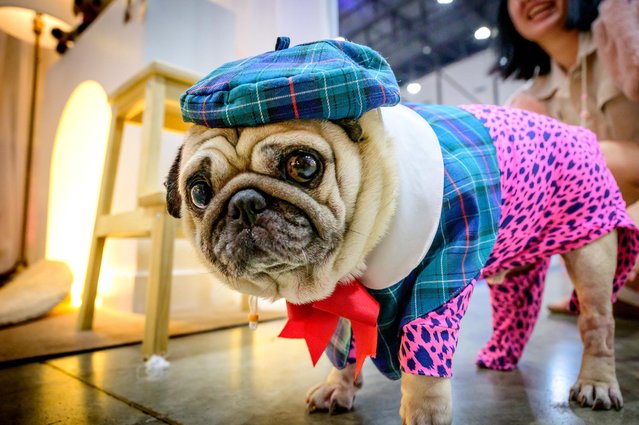