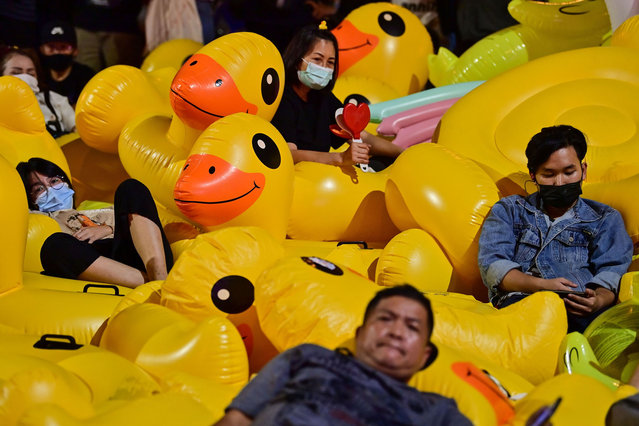 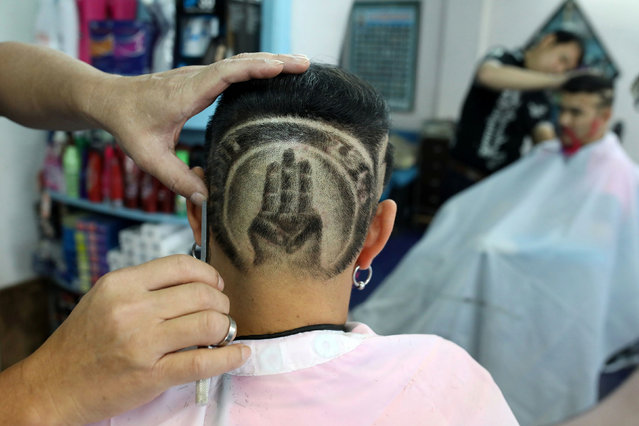 Mitree Chitinunda, a former ultra-royalist who once got a haircut of King Maha Vajiralongkorn's portrait on the back of his head with words “Long Live the King” last year, changes his haircut after the protests emerged, to the three-fingers salute, a symbol of anti-government protest that is demanding curb for monarchy's power in Bangkok, Thailand on November 24, 2020. (Photo by Soe Zeya Tun/Reuters) 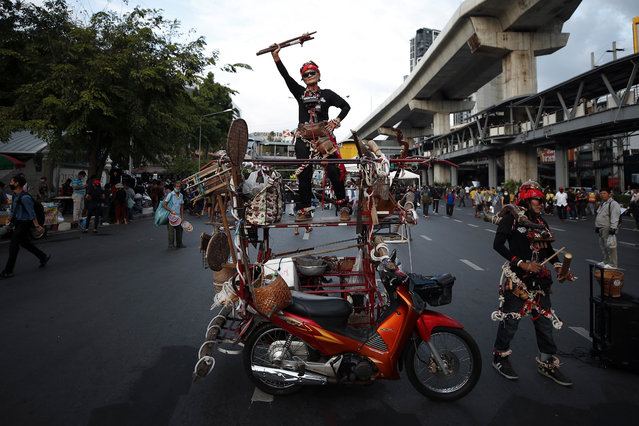 A Thai anti-government protester stands on top of a modified motorcycle as she joins a street protest calling for political and monarchical reform in Bangkok, Thailand, 02 December 2020. Thailand has been facing political turmoil amid months-long street protests calling for the political and monarchical reform and the resignation of the prime minister Prayuth Chan-ocha who earlier in the day was acquitted of violating the constitution by continuing to live in the army house despite of his retirement as army commander in September 2014. (Photo by Diego Azubel/EPA/EFE) 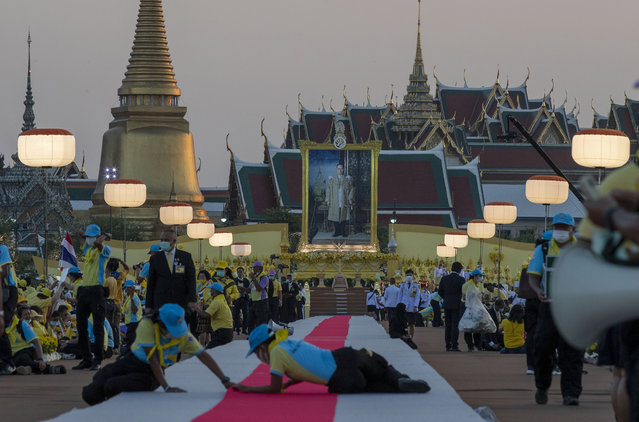 Officials adjust a carpet as late King Bhumibol Adulyadej's images is displayed in the background ahead of the arrival of King Maha Vajiralongkorn and Queen Suthida to participate in a candle lighting ceremony to mark birth anniversary of late King Bhumibol Adulyadej at Sanam Luang ceremonial ground in Bangkok, Thailand, Saturday, December 5, 2020. (Photo by Gemunu Amarasinghe/AP Photo) 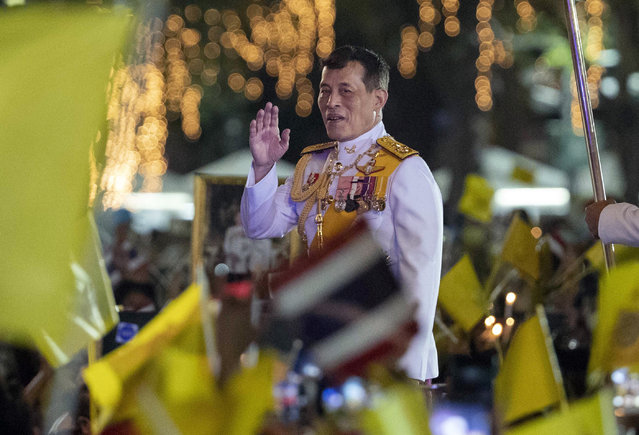 Thai King Maha Vajiralongkorn greets supporters as he walks to participate in a candle lighting ceremony to mark the anniversary of the birth of late King Bhumibol Adulyadej, at Sanam Luang ceremonial ground in Bangkok, Thailand, Saturday, December 5, 2020. Thousands of yellow-clad supporters greeted Thailand's king in Bangkok on Saturday as he led a birthday commemoration for his revered late father, the latest in a series of public appearances at a time of unprecedented challenge to the monarchy from student-led protestors. (Photo by Gemunu Amarasinghe/AP Photo) 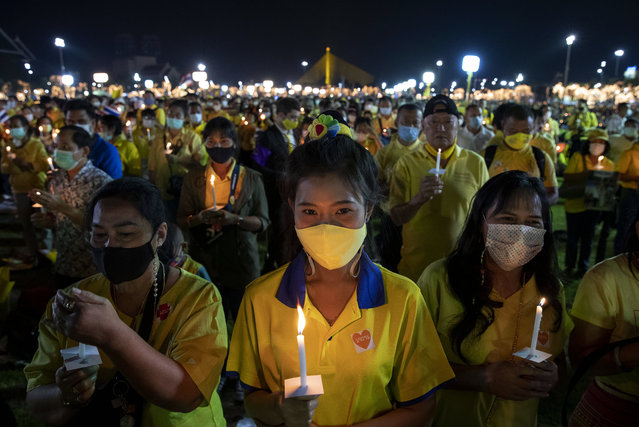 Supporters of the monarchy participate in a candle lighting ceremony to mark the anniversary of the birth of late King Bhumibol Adulyadej at Sanam Luang ceremonial ground in Bangkok, Thailand, Saturday, December 5, 2020. (Photo by Gemunu Amarasinghe/AP Photo) 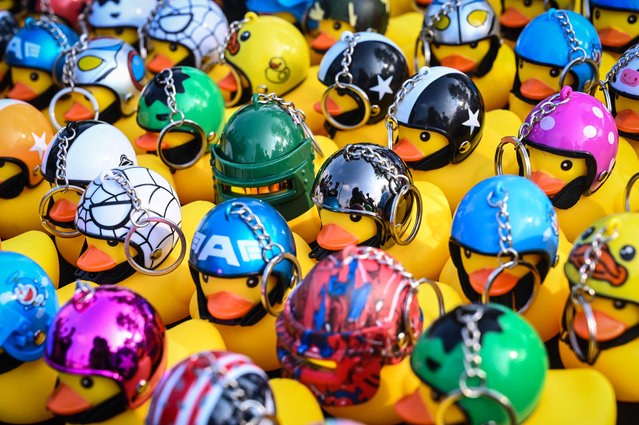 Keychains in the shape of small yellow rubber ducks are seen for sale on November 22, 2020 in Bangkok, Thailand. Students and “red shirt” demonstrators held a carnival-themed pro-democracy protest on Sunday, as part of a series of protests that have taken place demanding constitutional reforms. (Photo by Sirachai Arunrugstichai/Getty Images) 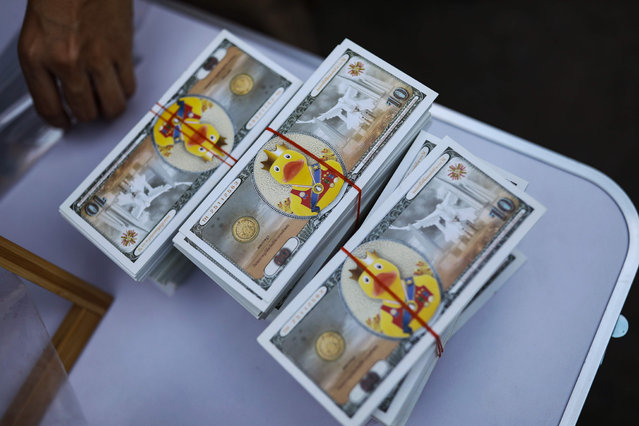 Mock banknotes are displayed as pro-democracy protesters take part in an anti-government rally outside the headquarters of the Siam Commercial Bank in Bangkok on November 25, 2020. (Photo by Jack Taylor/AFP Photo) 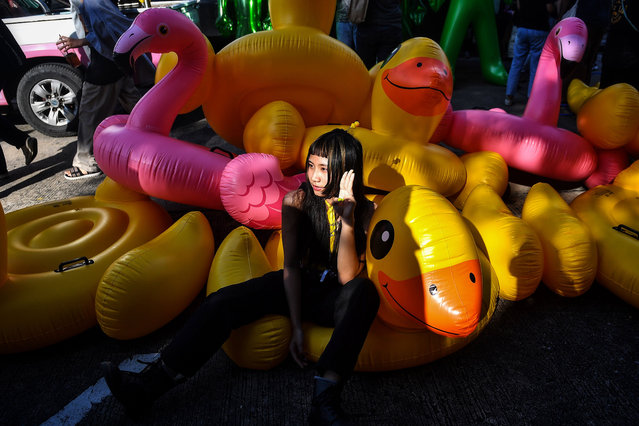 A pro-democracy protester gives the three-finger salute as she poses on an inflatable duck during an anti-government rally outside the headquarters of the Siam Commercial Bank in Bangkok on November 25, 2020. (Photo by Lillian Suwanrumpha/AFP Photo) 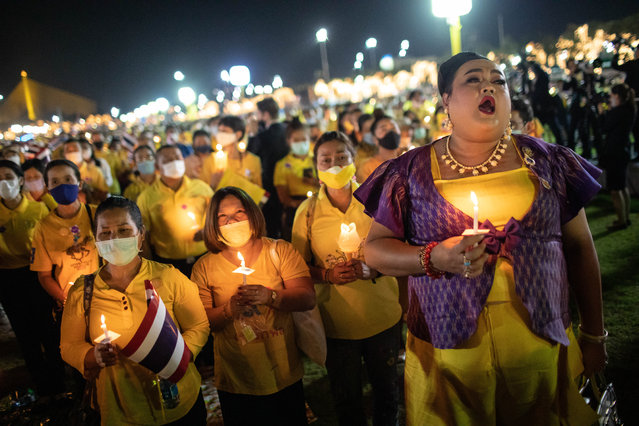 Thai royalist supporters hold candles at Sanam Luang in front of the Grand Palace during a ceremony to mark the birthday of the late Thai King Bhumibol Adulyadej (Rama 9) in Bangkok, Thailand on December 05, 2020. Thai King Maha Vajiralongkorn (Rama 9), was present during the ceremony. (Photo by Guillaume Payen/Anadolu Agency via Getty Images) 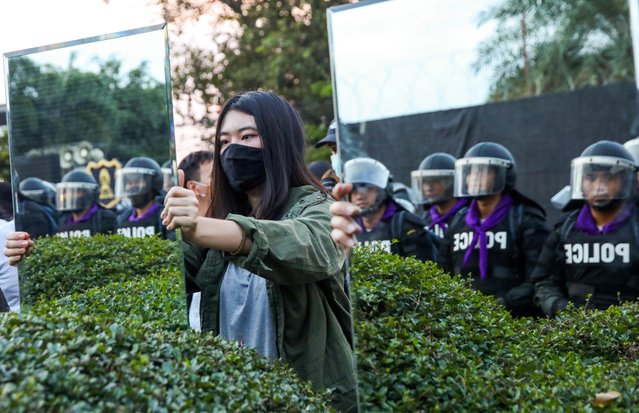 Protesters hold mirrors in front of riot police officers during a pro-democracy rally demanding the prime minister to resign and reforms on the monarchy, at 11th Infantry Regiment, in Bangkok, Thailand, November 29, 2020. (Photo by Soe Zeya Tun/Reuters) 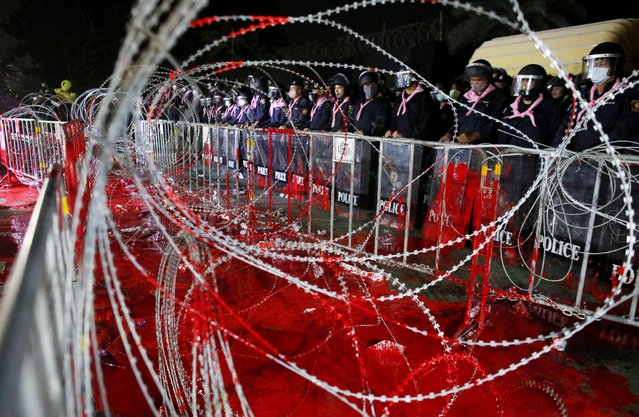 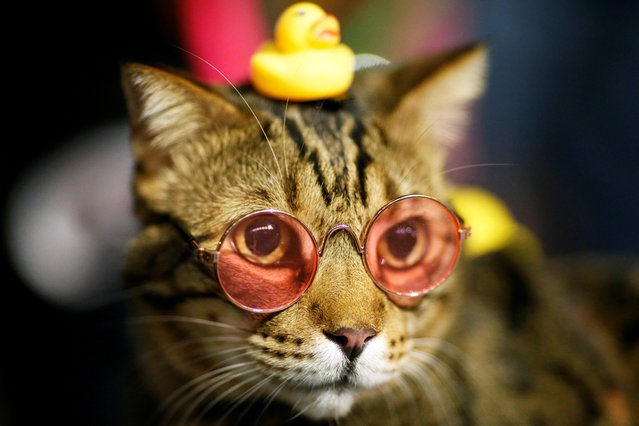 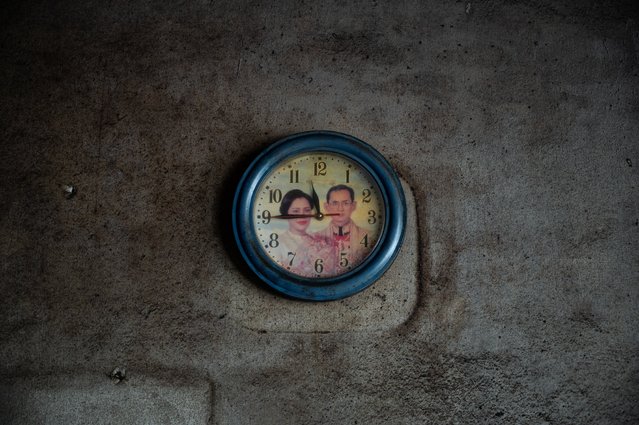 A faded image of Thailand's late King Bhumibol Adulyadej (Rama IX) and Queen Sirikit decorates a clock face in an old house on December 04, 2020 in Ranong, Thailand. Southern Thailand has long been seen as a stronghold of Royalist support. Reverence for the present and past kings is high, and publicly visible all across the southern provinces. Portraits of the royal family saturate public and private spaces in the region, a reminder that despite ongoing protests in the capital, support for existing institutions remains high in some parts of the country, and especially in the south. (Photo by Sirachai Arunrugstichai/Getty Images) 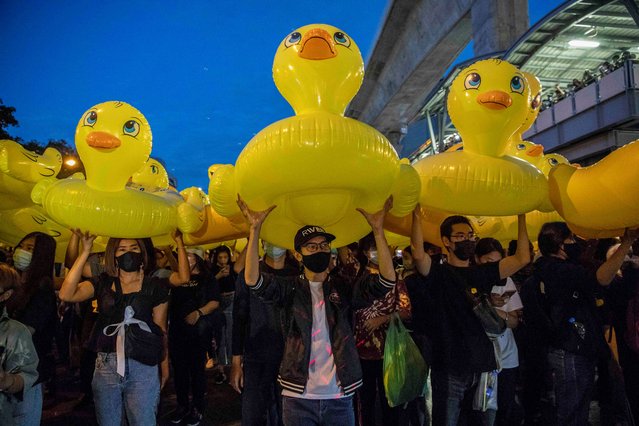 Thai pro-democracy protesters hold rubber ducks, a protector symbol of the protesters, during a rally on November 27, 2020 in Bangkok, Thailand. Protesters descended on one the Thai capital's most-congested intersections to stage what they called a “coup rehearsal drill”, called by the United Front of Thammasat and Demonstration group. (Photo by Lauren DeCicca/Getty Images) 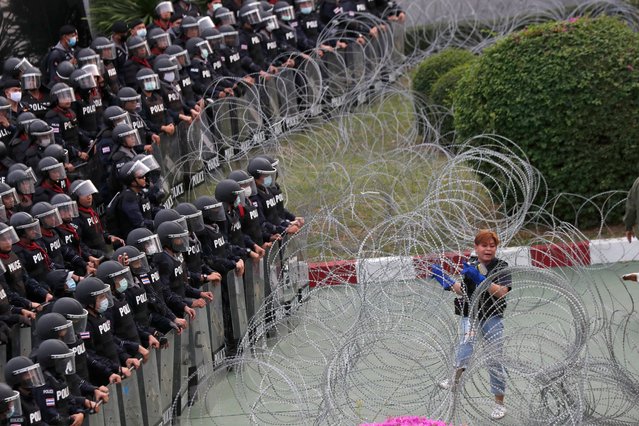 Riot police stand guard as a protester attempts to get through barbed wire barricading the base entrance of the 11th Infantry Regiment, a palace security unit under direct command of the Thai king, Sunday, November 29, 2020, in Bangkok, Thailand. Pro-democracy demonstrators are continuing their protests calling for the government to step down and reforms to the constitution and the monarchy, despite legal charges being filed against them and the possibility of violence from their opponents or a military crackdown. (Photo by Sakchai Lalit/AP Photo) 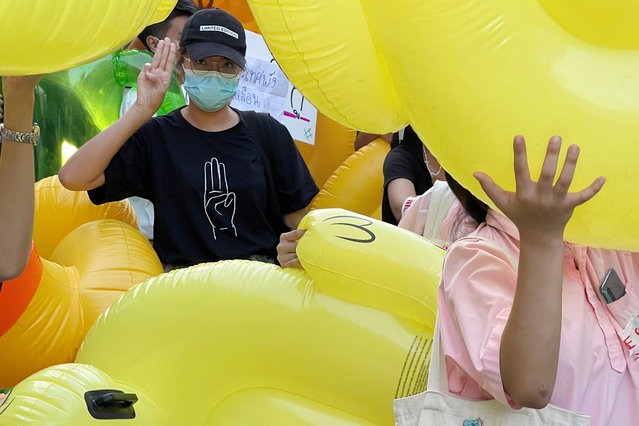 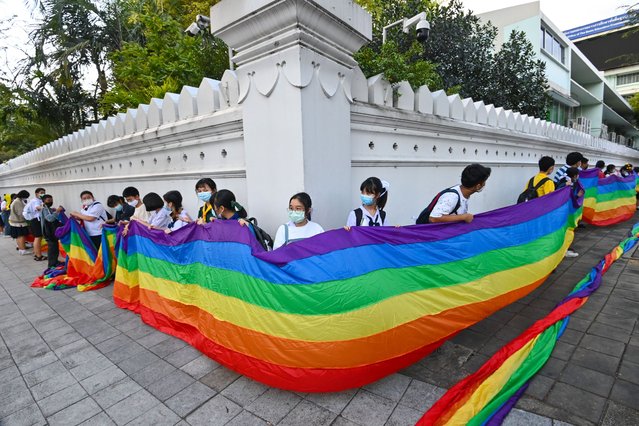 Students hold up a rainbow flag in support of the LGBTQ movement during a “Bad Student” protest outside the Ministry of Education in Bangkok on December 1, 2020. (Photo by Mladen Antonov/AFP Photo) 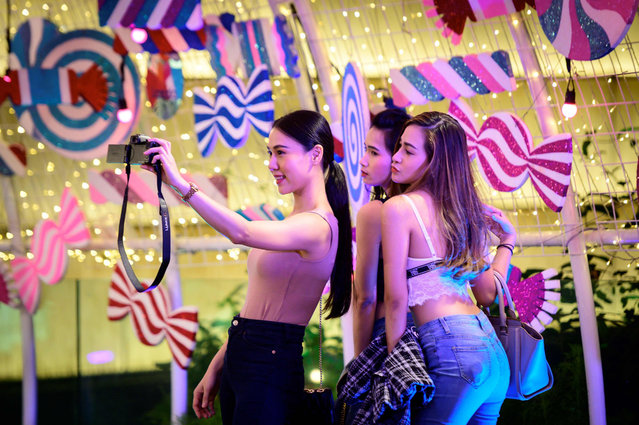