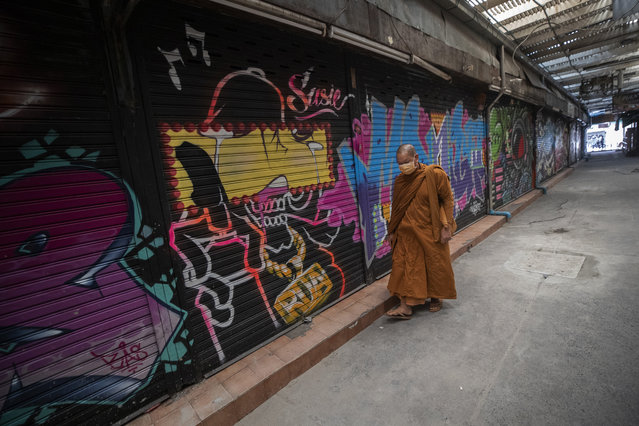 Thai Buddhist monk wearing a face mask to help curb the spread of the coronavirus walks pass closed shops in Khao San road, a popular hangout for Thais and tourists in Bangkok, Thailand Wednesday, February 3, 2021. Amid fears of new variants of the virus, new restrictions on movement have hit just as people start to look ahead to what is usually a busy time of year for travel. (Photo by Sakchai Lalit/AP Photo) 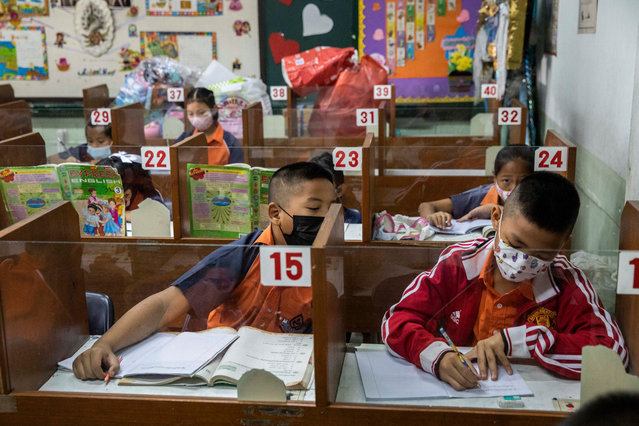 Thai students wear face masks during their first class at the Thai Niyom Songkhrao School on February 01, 2021 in Bangkok, Thailand. Thailand said that from next week, it will reopen most schools, excluding those in Samut Sakhon province, the epicenter of the country's most recent Covid-19 outbreak. (Photo by Lauren DeCicca/Getty Images) 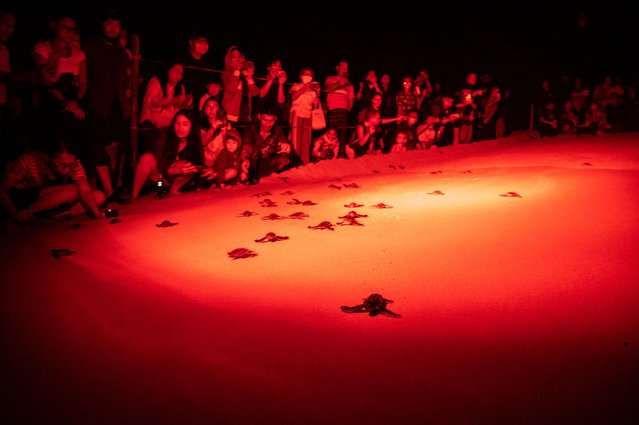 Under dim glow of less-intrusive red lighting, visitors are seen gathering around the beach to watch the release of Leatherback sea turtle hatchlings into the sea on February 03, 2021 in Phang Nga, Thailand. With limited tourism activities along the Andaman Coast of Thailand, and possibly with reproductive cycle of the Leatherback sea turtle (Dermochelys coriacea), these highly threatened species of sea turtle assessed as Vulnerable in the IUCN Red List are returning to nest along the sandy beach of Phang Nga and Phuket in record-breaking number with at least 17 nests, the highest number of nests recorded within one nesting season for over a decade in Thailand. (Photo by Sirachai Arunrugstichai/Getty Images) 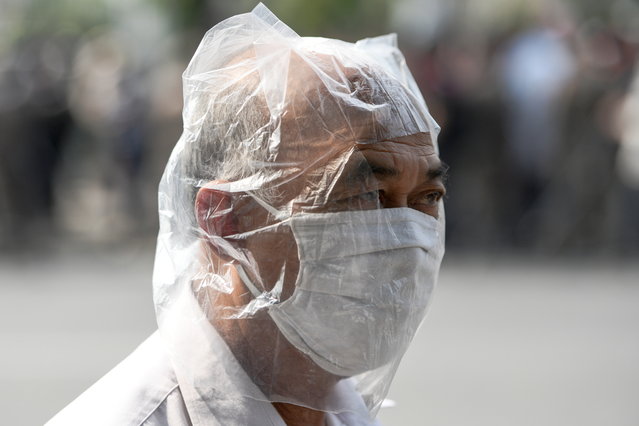 A man wearing a plastic bag as precaution against the coronavirus disease (COVID-19), takes part in protests demanding to reduce the Royal budget and distribute it to people, in front of the government house in Bangkok, Thailand on January 26, 2021. (Photo by Challinee Thirasupa/Reuters) 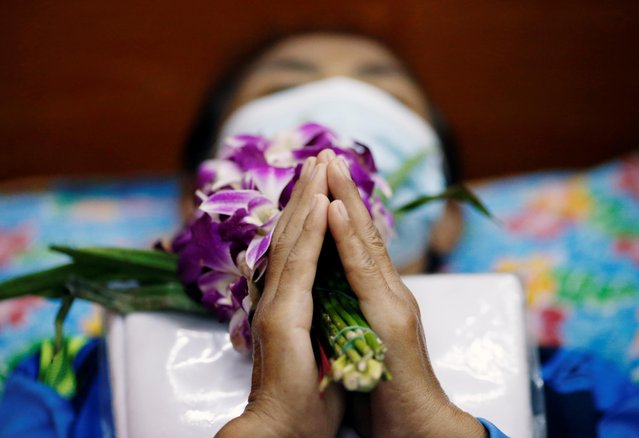 A devotee lies down and prays inside a coffin to trick death and improve luck at a temple in Bangkok, Thailand on January 27, 2021. (Photo by Soe Zeya Tun/Reuters) 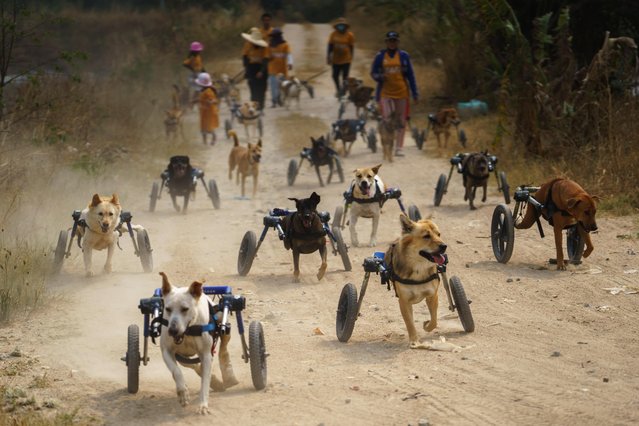 Disabled dogs in mobility aids run during a daily walk at The Man That Rescues Dogs Foundation in Chonburi, Thailand, January 26, 2021. Most victims of accidents, the dogs are being nursed back to health at a shelter in Thailand's province of Chonburi southeast of the capital, Bangkok. (Photo by Athit Perawongmetha/Reuters) 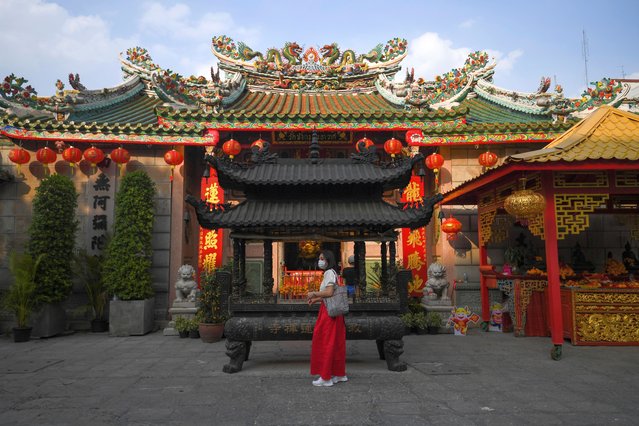 A woman wearing a face mask looks on ahead of the Lunar New Year celebration at the Chinatown in Bangkok, Thailand, February 10, 2021. (Photo by Chalinee Thirasupa/Reuters) 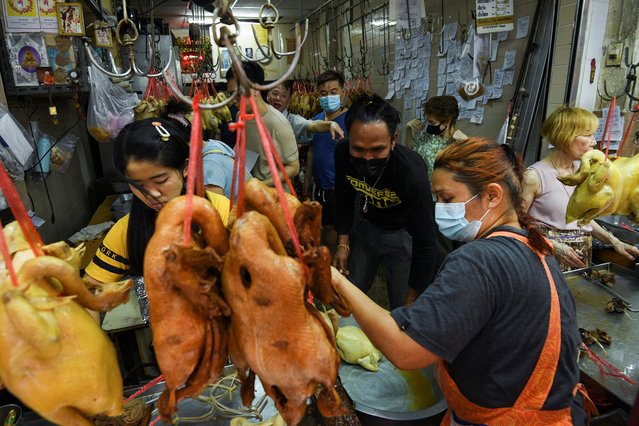 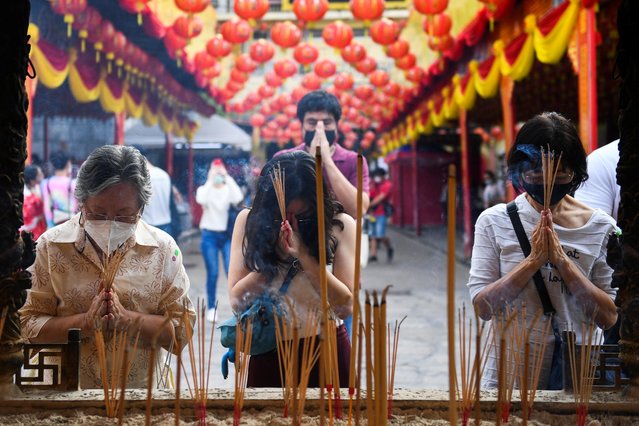 People pray at a temple ahead of the Lunar New Year celebration in Bangkok, Thailand, February 10, 2021. (Photo by Chalinee Thirasupa/Reuters) 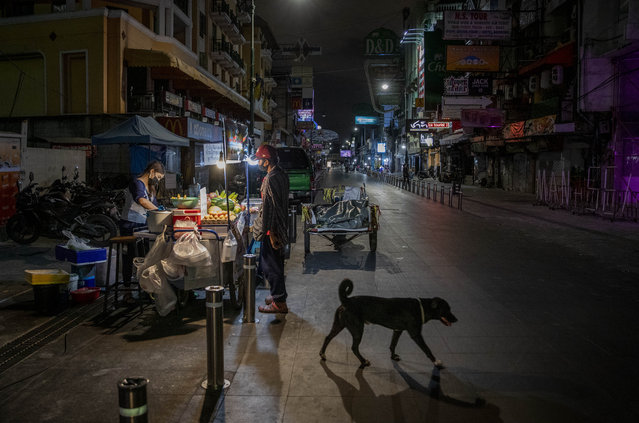 In this January 4, 2021, file photo, a lone street vender cooks a meal for a customer at Khao San road, a popular hangout with bars and entertainment for Thais and tourists in Bangkok, Thailand. Amid fears of new variants of the virus, new restrictions on movement have hit just as people start to look ahead to what is usually a busy time of year for travel. (Photo by Gemunu Amarasinghe/AP Photo/File) 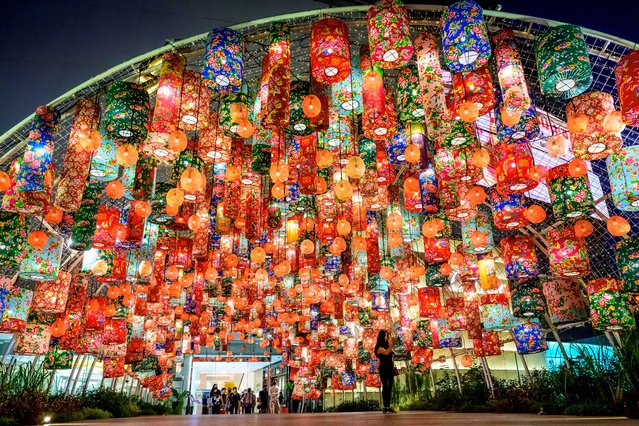 A woman takes a selfie under festive decorations for the upcoming Lunar New Year outside a shopping mall in Bangkok on February 3, 2021. (Photo by Mladen Antonov/AFP Photo) 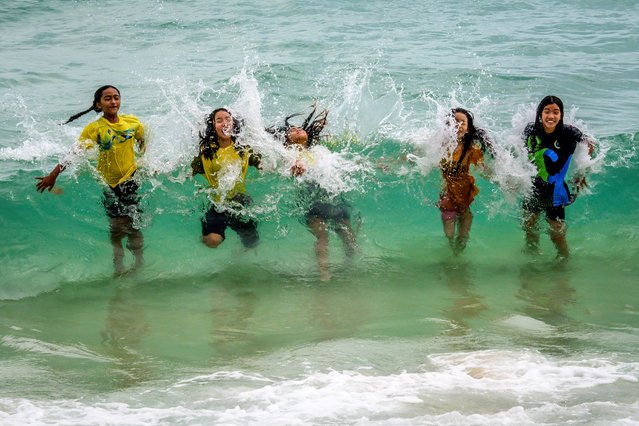 Children play in the waves on a beach in Koh Samui in the Gulf of Thailand on January 17, 2021. (Photo by Mladen Antonov/AFP Photo) 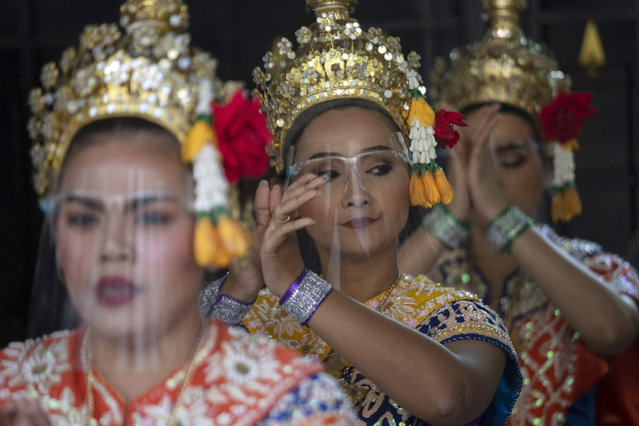 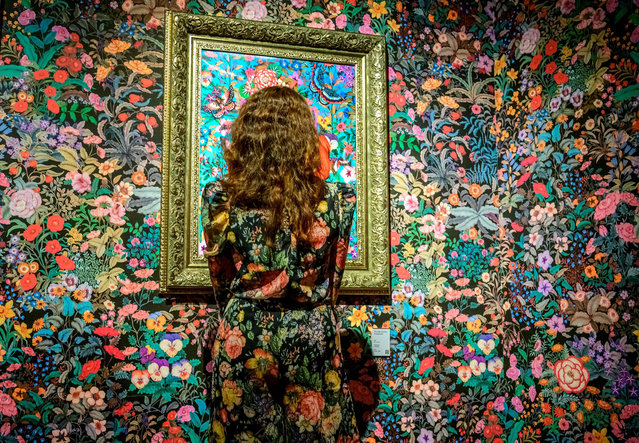 This photograph taken on January 29, 2021 shows a visitor looking at a painting by artist Phannapast “Yoon” Taychamaythakool exhibited as part of the art project “Venus in the Shell” at the River City Arts and Antiques shopping centre in Bangkok. (Photo by Mladen Antonov/AFP Photo) 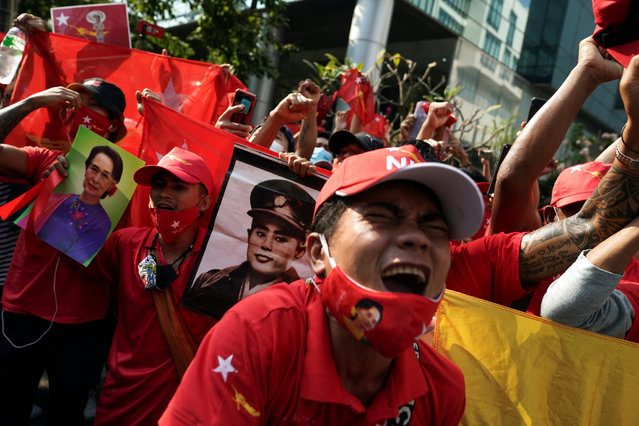 NLD supporters shout slogans in front of the Myanmar embassy during a rally after the military seized power from a democratically elected civilian government and arrested its leader Aung San Suu Kyi, in Bangkok, Thailand on February 1, 2021. (Photo by Athit Perawongmetha/Reuters) 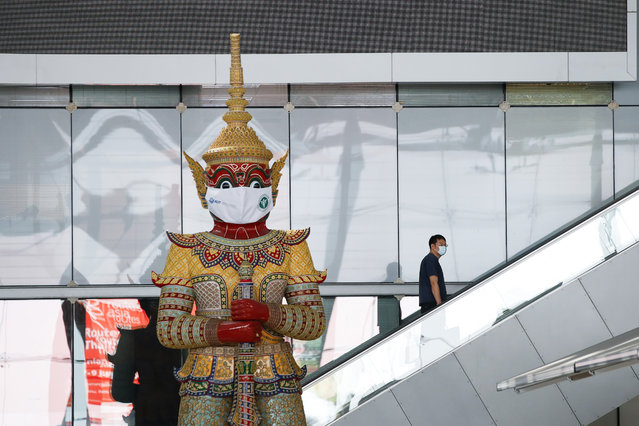 A traveler wearing a protective face mask rides an escalator past a Ramayana Giant Guardian statue with a large protective mask at the Suvarnabhumi International Airport amid a new wave of the coronavirus disease (COVID-19) pandemic in Bangkok, Thailand, 05 January 2021. The Thai government ordered a nationwide partial business shutdowns for 28 'red zones' provinces including Bangkok as part of stricter measures to curb the new wave of the infectious disease. Travelers flying between Thai provinces could face additional health screening, and international flights from the UK have been put on hold. Thai authorities recorded 745 new cases with 709 being local infections, making it the highest number of daily infections since the start of the pandemic. (Photo by Diego Azubel/EPA/EFE) 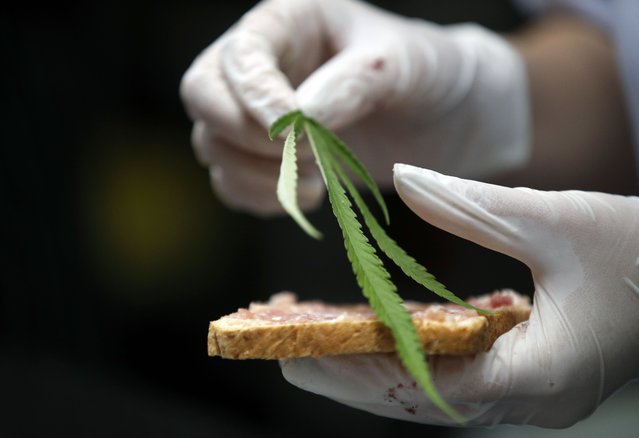 A chef puts marijuana leaves on top of “Giggle Bread”, or fried bread with minced pork spread, at Abhaibhubejhr Day Spa, in Prachin Buri province, Thailand, 12 January 2021. The Abhaibhubejhr Day Spa includes Thailand's first cannabis restaurant, serving healthy Thai food prepared with cannabis ingredients, after the Thai government legalized the use of most parts of marijuana and hemp plants in cosmetics and food. Based on Thai traditional folk wisdom, marijuana has been used as spice and herbal treatment for centuries. Abhaibhubejhr Day Spa is part of the Chao Phraya Abhaibhubejhr Hospital in Prachin Buri, home to the country's first medicinal marijuana clinic. In 2018 Thailand became the first government in South East Asia to legalize cannabis for medical use and research purposes. (Photo by Rungroj Yongrit/EPA/EFE) 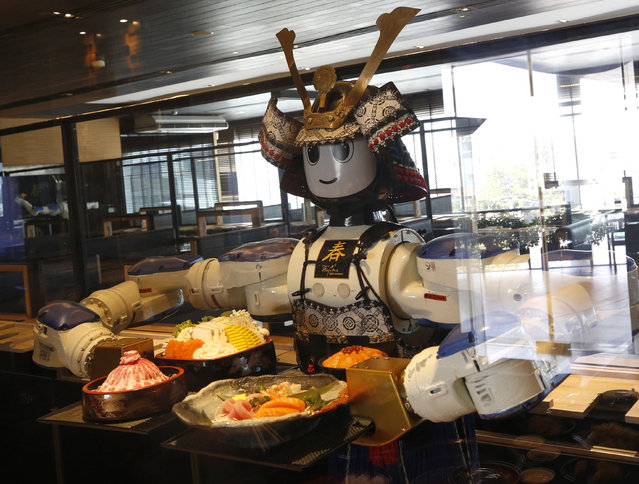 A robot serves customers at a Japanese robot restaurant amid a new wave of coronavirus disease (COVID-19) in Bangkok, Thailand, 15 January 2021. Thailand's first Japanese robot restaurant Hajime, where the serving waiters are robots, has been operating since 2010, serving Japanese food shabu, yakiniku and sushi. After one year since the first COVID-19 infection in the country, Hajime has more than two times more customers than before. (Photo by Narong Sangnak/EPA/EFE) 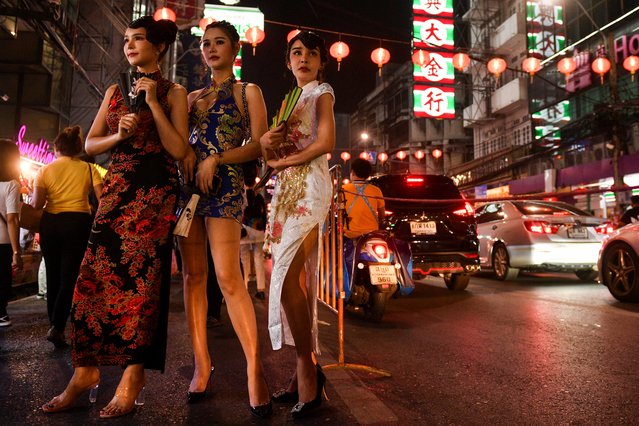