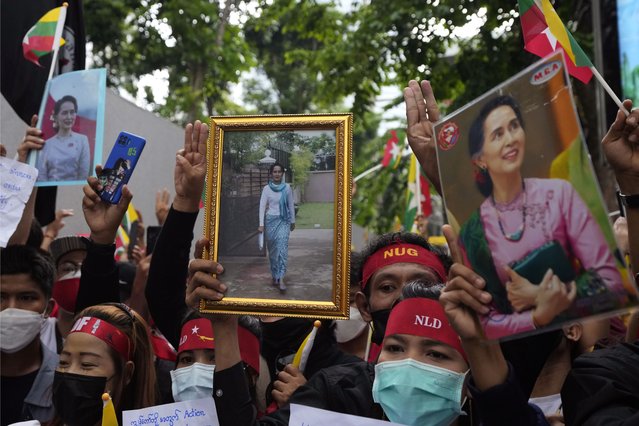 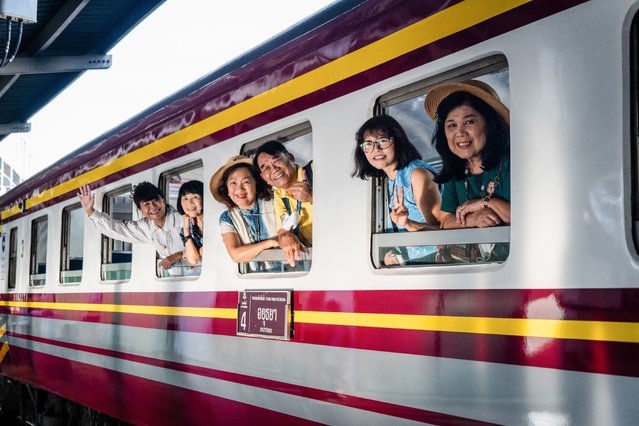 A group of Thai tourists poses for a photo before the commemorative steam train journey to Ayutthaya begins on July 28, 2022. Royal fans and train enthusiasts gather on the northbound platform at Hua Lamphong Station in Bangkok for a commemorative steam train trip to Ayutthaya (the former capital city of Siam) for the occasion of HM King Vajiralongkorn's 70th birthday on July 28, 2022. The World War II Era steam train locomotives have been restored for limited, commemorative use for tourism. (Photo by Matt Hunt/SOPA Images/Rex Features/Shutterstock) 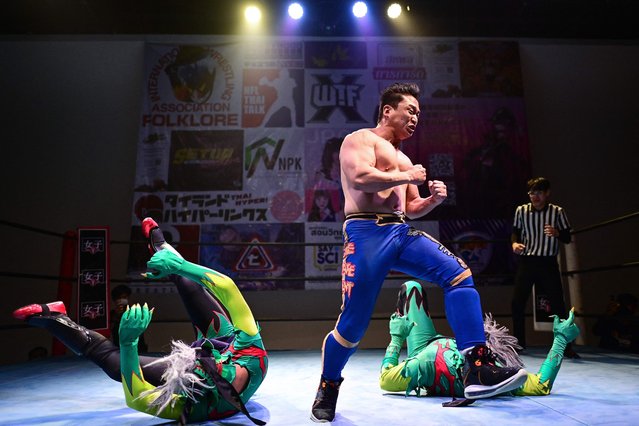 This photograph taken on July 30, 2022 shows Singaporean pro-wrestler Andrew Tang (C) aka “The Statement” performing in the ring during a match at the SETUP Thailand Pro Wrestling show in Bangkok. The part-sport, part-show from SETUP Thailand Pro Wrestling has been slowly gaining popularity in Thailand, where it hopes to carve out a space for local wrestlers using distinctively Thai characters. (Photo by Manan Vatsyayana/AFP Photo) 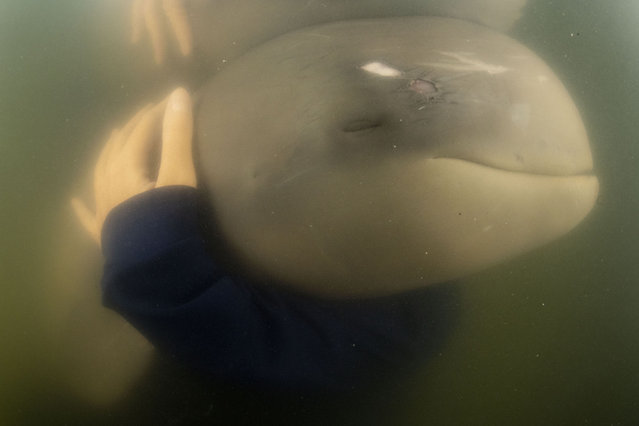 An orphaned Irrawaddy river dolphin (Orcaella brevirostris) takes a nap in the arms of its caretaker, while being raised at the rehabilitation facility of Marine Endangered Species Veterinary Hospital on August 01, 2022 in Rayong, Thailand. The Irrawaddy river dolphin was orphaned and rescued from stranding in the Gulf of Thailand on July 23 and then taken into care at Marine Endangered Species Veterinary Hospital of the Department of Marine and Coastal Resources as the chance of a baby dolphin to survive on its own in the wild without its mother is slim. The veterinarians plan to raise the baby Irrawaddy dolphin until it wean and later release it back to the wild when ready, hoping that it would rejoin the pod of this endangered species in the Gulf of Thailand. Irrawaddy River Dolphin is a euryhaline species, often found living in murky coastal zones and rivers of Southeast Asia and the species is listed as Endangered in the IUCN Red List of threatened species. (Photo by Sirachai Arunrugstichai/Getty Images) 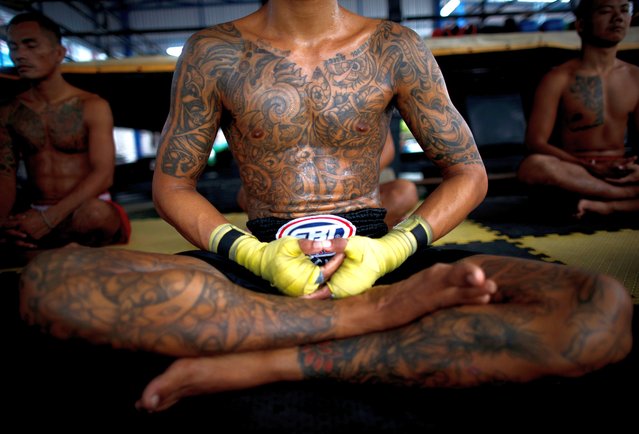 Thai inmates practice meditation as part of a Muay Thai boxing rehabilitation program at Nonthaburi Prison in Nonthaburi province, Thailand, 02 August 2022. The prison in the Bangkok metropolitan region offers the social rehabilitation program to allow participating inmates – currently 13 of an estimated 1,200 prisoners – to learn the national martial art combat sport of Muay Thai boxing. The project was launched in 2020 by the prison's director, Preethida Somchit, a former athlete herself, and the department of corrections but had to be suspended due to the coronavirus disease (COVID-19) pandemic. The idea was to promote physical and mental health and discipline and reduce violence at the facility. Another goal is to help prepare the prisoners to reintegrate into society and offer them prospects for a better future after their release, either as professional Muay Thai fighters or trainers. The participants train seven hours a day, six days a week, with the help of a licensed trainer and former prison guard. Thailand has the largest prison population in Southeast Asia and one of the world's most overcrowded prison systems. Most prisoners are held for drug offenses, according to an International Federation for Human Rights report. (Photo by Rungroj Yongrit/EPA/EFE) 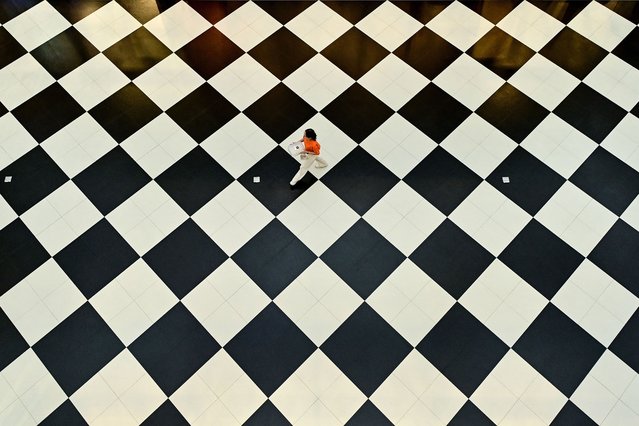 A woman walks past on a checkered floor at a mall in Bangkok on August 16, 2022. (Photo by Manan Vatsyayana/AFP Photo) 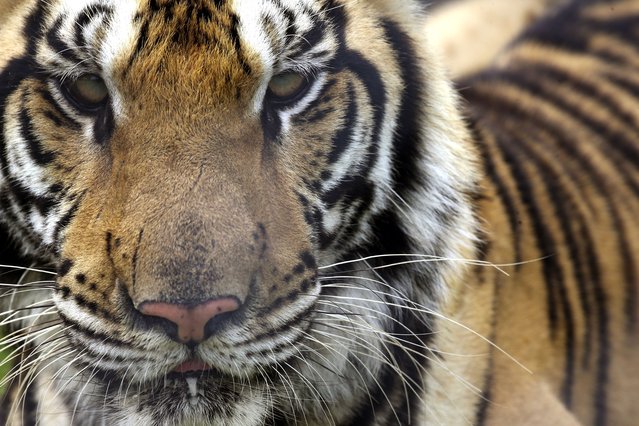 One of the rescued tigers at the conservation and animal rescue center Wildlife Friends Foundation Thailand (WFFT) in Phetchaburi province, Thailand, 16 August 2022. The Wildlife Friends Foundation Thailand (WFFT) has undertaken the largest rescue of tigers in Thailand's history after rescuing and rehoming 11 tigers and two bears from Phuket Zoo that were left behind following its closure. The zoo had to shut down because of the financial crisis due to the COVID-19 pandemic, during which the country's borders were closed to foreign tourists and left zero income to the zoo. (Photo by Narong Sangnak/EPA/EFE) 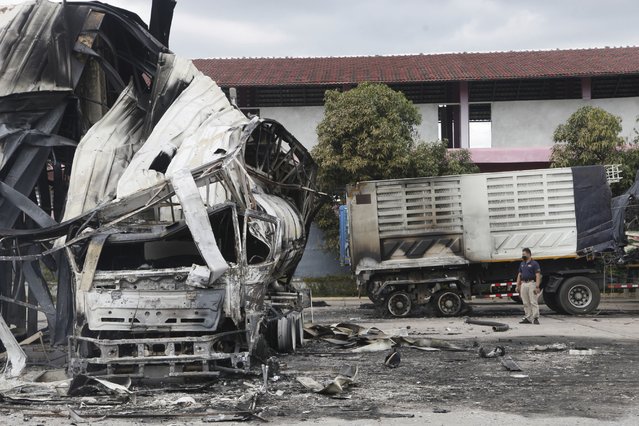 A Thai officer stands beside the burnt down oil tanker at a gas station in Pattani province, southern Thailand, Wednesday, August 17, 2022. A wave of arson and bombing attacks overnight hit Thailand’s southernmost provinces, which for almost two decades have been the scene of an active Muslim separatist insurgency, officials said Wednesday. (Photo by Sumeth Panpetch/AP Photo) 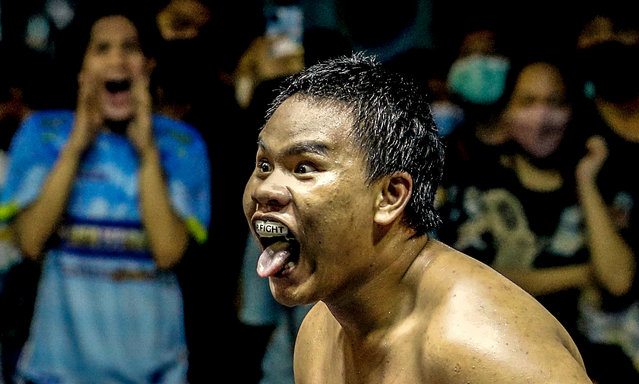 Amateur fighter, 20 year old clerk Yutthasin Thebamrung, taunts his opponent, an aspiring actor nicknamed Nick Sadday, during an underground martial arts event by “Fight Club Thailand”, at a youth sports centre in the Klong Toey slum, Bangkok, Thailand, 23 July 2022. Inspired by the Hollywood movie “Fight Club”, a group of young martial arts enthusiasts decided to start their own fight club to give regular people, with regular jobs, a place where they can come test themselves against one another or simply release some steam at the end of their work week. Founded in 2016 mainly as a group of youngsters putting up fights in secluded locations, the group decided to incorporate rules to make it safer and protect the fighters. Today, the Fight Club Thailand events showcase Muay Thai fights and Boxing bouts. All fights have only one 3 minute round, where grappling or slamming one's opponent to the ground is not permitted, and elbow strikes, hitting behind the head or neck, are also not allowed. There is medical personal on stand by, and an ambulance ready should there be a serious injury. Although the name may insinuate violence, and the events are certainly filled with it in every fight, the purpose and aim of Fight Club Thailand is to forge friendships through fighting. Fighters leave it all in the 3 minutes they face each other, but once it is over, they are “Fight Club brothers”. (Photo by Diego Azubel/EPA/EFE) 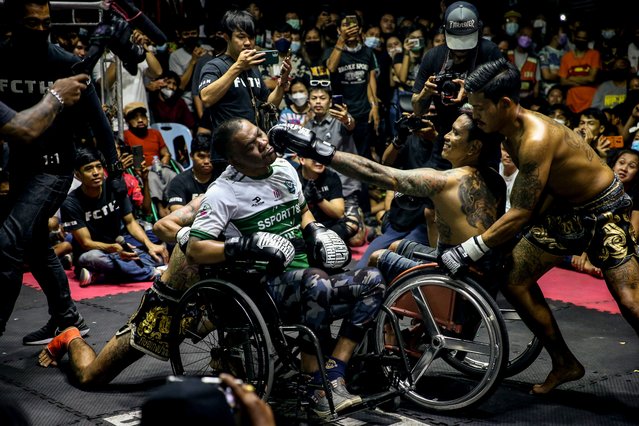 Wheelchair bound amateur fighters, Black Crow (C L) and Podum, throw punches at each other during an underground fighting event by “Fight Club Thailand”, at a temple in Nonthaburi province, on the outskirt of Bangkok, Thailand, 27 August 2022. (Photo by Diego Azubel/EPA/EFE) 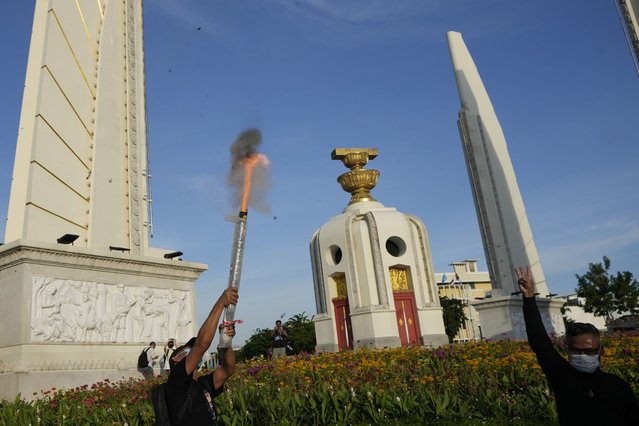 An anti-government protester shoots fire work into sky near Democracy Monument to demand that Prime Minister Prayuth Chan-ocha step down from his position in Bangkok, Thailand Tuesday, August 23, 2022. Thailand Constitutional Court on Monday received a petition from opposition lawmakers seeking a ruling on whether Prayuth has reached the legal limit on how long he can remain in office. (Photo by Sakchai Lalit/AP Photo) 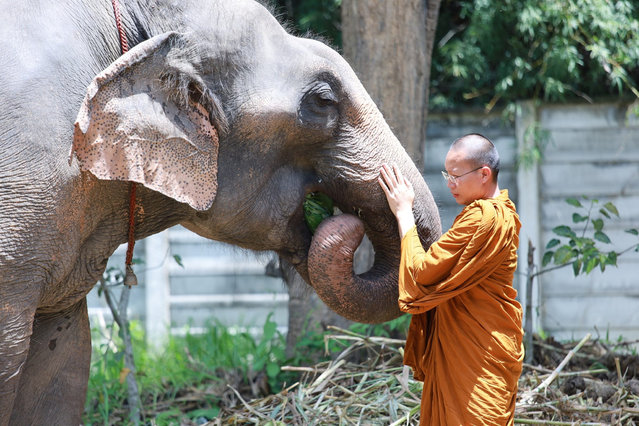 This is the heartwarming moment an elephant kneels to receive bananas from a Buddhist monk who rescued him from forced labour in the tourist industry Chiang Mai, northern Thailand, on August 24, 2022. (Photo by ViralPress) 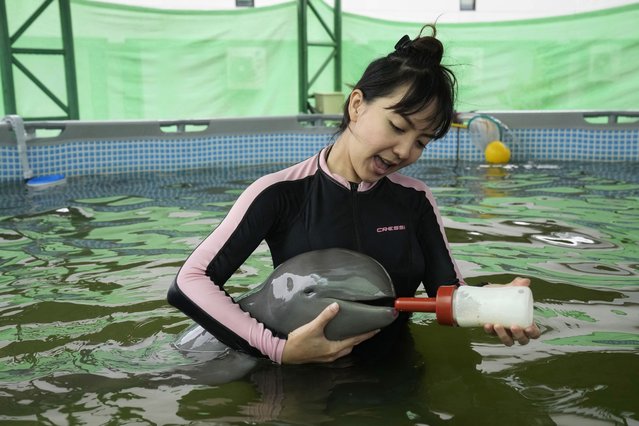 Volunteer Thippunyar Thipjuntar feeds a baby dolphin named Paradon with milk at the Marine and Coastal Resources Research and Development Center in Rayong province in eastern Thailand, Friday, August 26, 2022. The Irrawaddy dolphin calf was drowning in a tidal pool on Thailand’s shore when fishermen found him last month. The calf was nicknamed Paradon, roughly translated as “brotherly burden”, because those involved knew from day one that saving his life would be no easy task. But the baby seems to be on the road to recovery. (Photo by Sakchai Lalit/AP Photo) 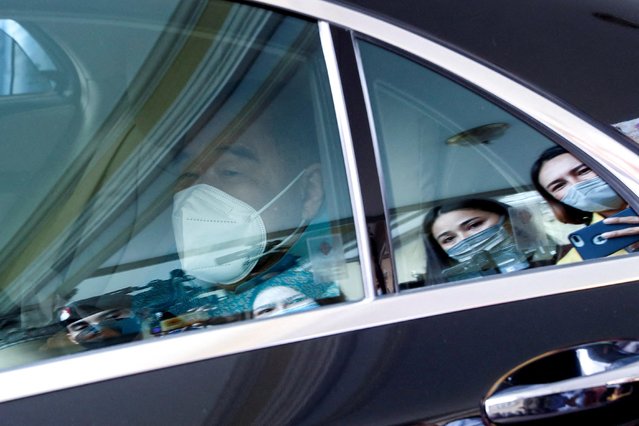 Deputy Prime Minister Prawit Wongsuwan, as acting Prime Minister, looks on through the window of a car at the Government House, as the Constitutional Court suspended Prime Minister Prayuth Chan-ocha from official duties last week, after deciding to hear a petition to review his legally mandated eight-year term limit, in Bangkok, Thailand on August 30, 2022. (Photo by Athit Perawongmetha/Reuters) 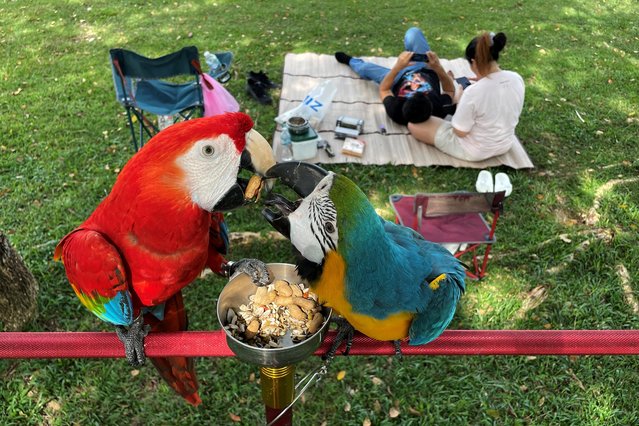 Nui and her husband have a picnic in a park with their pet parrots in Phuket, Thailand on August 31, 2022. (Photo by Jorge Silva/Reuters) 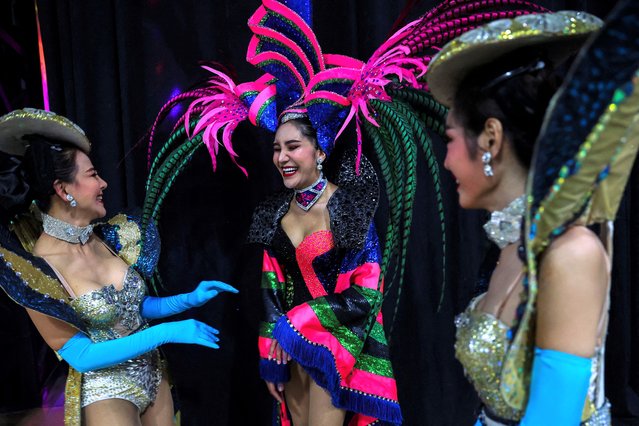 Peerapong Butakul, a transgender person also known as “Bee”, waits backstage during a rehearsal ahead of the reopening of Tiffany's show after closing for almost three years due to the coronavirus disease (COVID-19) pandemic, in Pattaya, Thailand on August 31, 2022. (Photo by Athit Perawongmetha/Reuters) 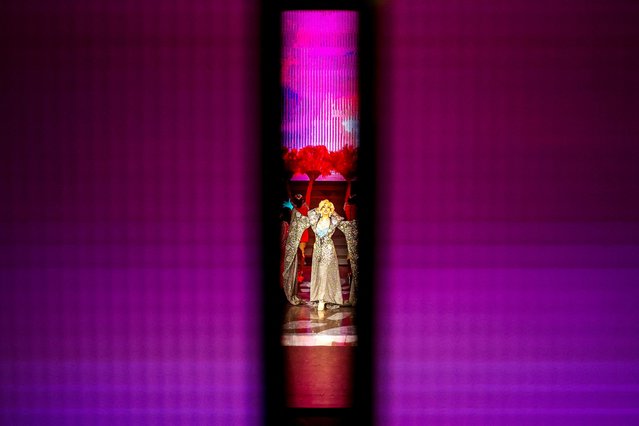 A transgender person performs during the reopening of Tiffany's show after closing for almost three years due to the coronavirus disease (COVID-19) pandemic, in Pattaya, Thailand, September 1, 2022. (Photo by Athit Perawongmetha/Reuters)

Peerapong Butakul, a transgender person also known as “Bee”, prepares backstage before a rehearsal ahead of the reopening of Tiffany's show after closing for almost three years due to the coronavirus disease (COVID-19) pandemic, in Pattaya, Thailand, August 31, 2022. (Photo by Athit Perawongmetha/Reuters) 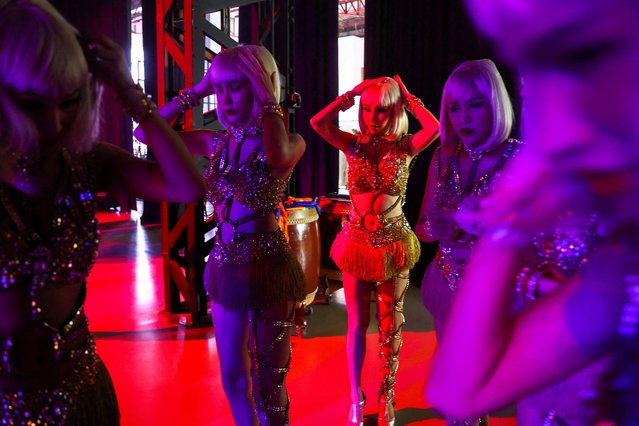 Peerapong Butakul, a transgender person also known as “Bee”, waits backstage with others during a rehearsal ahead of the reopening of Tiffany's show after closing for almost three years due to the coronavirus disease (COVID-19) pandemic, in Pattaya, Thailand on September 1, 2022. (Photo by Athit Perawongmetha/Reuters) 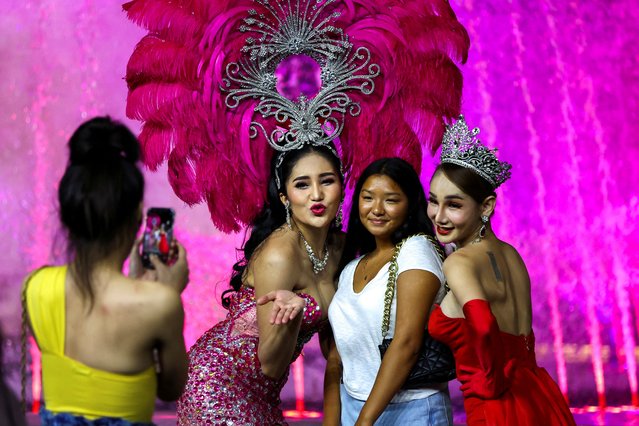