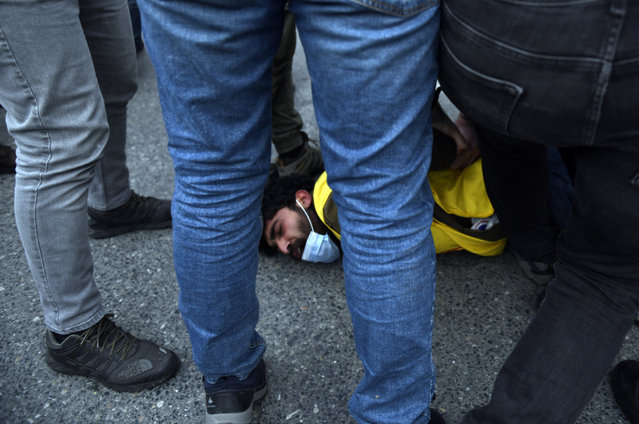 Turkish police officers arrest a youth during clashes with students of the Bogazici University protesting the appointment of a government loyalist to head their university, in Istanbul, Tuesday, February 2, 2021. For weeks, students and faculty at Istanbul's prestigious Bogazici University have been protesting President Recep Tayyip Erdogan's appointment of Melih Bulu, a figure who has links to his ruling party, as the university's rector. They have been calling for Bulu's resignation and for the university to be allowed to elect its own president. (Photo by Omer Kuscu/AP Photo) 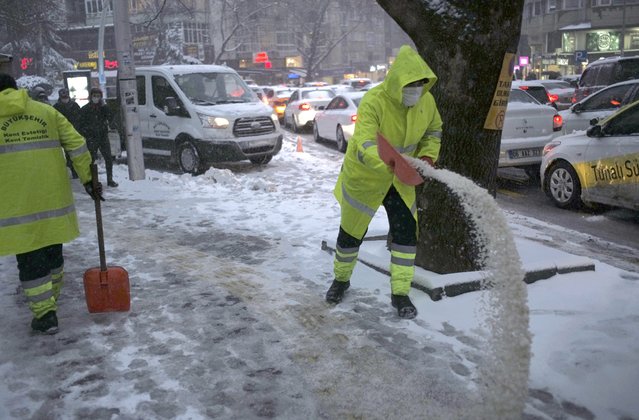 Municipality workers put down salt on snow-covered pavements to prevent them from becoming slippery, in Ankara, Turkey, Monday, February 15, 2021. Most of Turkish capital is covered by a blanket of snow after a day of flurries and snowfall is expected to continue over the next few days. (Photo by Burhan Ozbilici/AP Photo) 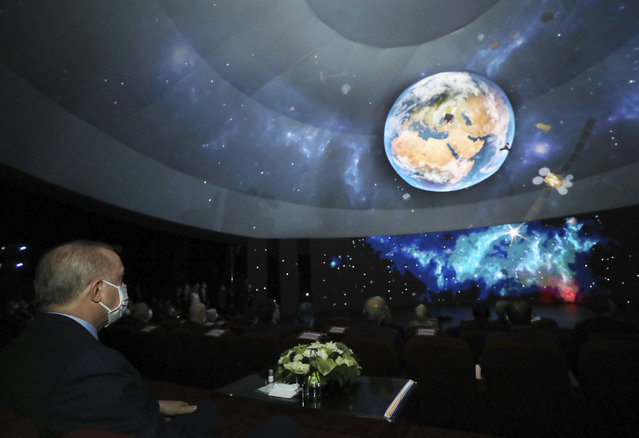 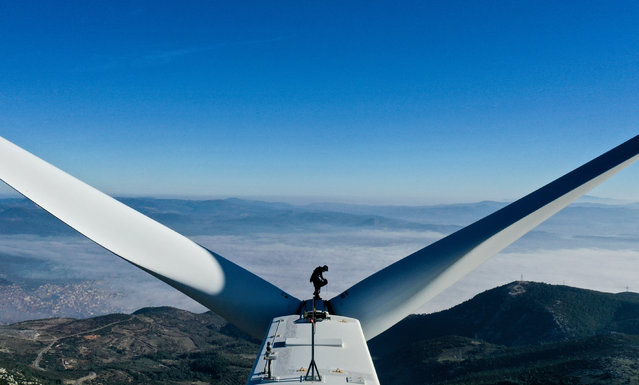 Rope access technicians carry out maintenance service on wind turbines including repairs, blade inspections and cleaning in Izmir, Turkey on February 19, 2021. In Turkey, where investments in renewable energy has increased, there are wind tribunes over 3,500. Turbines, where huge cranes and high platforms are used during the installation phase, require routine maintenance and repair work in certain periods. Technicians, who arrive at the wind park, stop the turbines to be maintained and repaired and the field mission of rope access technicians begins. The work of crews descending from a height of approximately 100 meters to perform maintenance and repair work take approximately 1 hour on each wing. (Photo by Mahmut Serdar Alakus/Anadolu Agency via Getty Images) 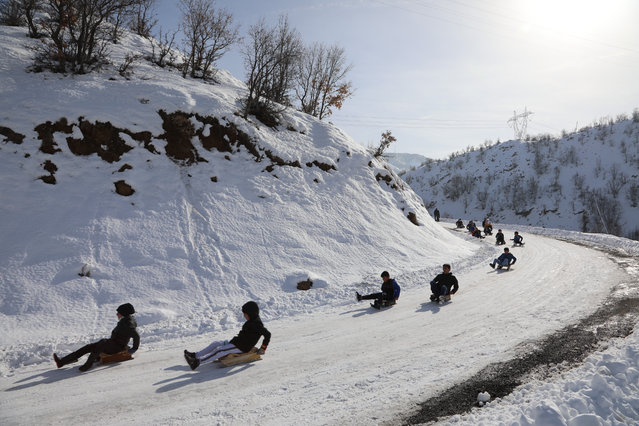 Children slide downhill with sledges after snowfall at Elmali village in Bingol province of Turkey on January 27, 2021. (Photo by Aydin Arik/Anadolu Agency via Getty Images) 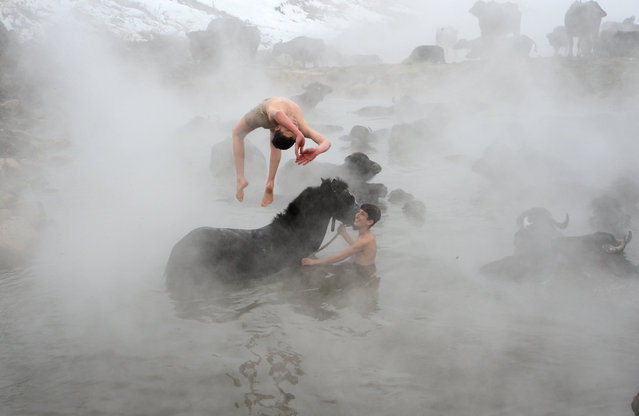 Youth, who do not mind the freezing cold, roll over buffalo and horses and dive into the hot spring water as buffaloes are being cleaned with a thermal water in Bitlis, Turkey on January 31, 2021. In the district of Guroymak in Bitlis, buffalo breeders wash their animals thermal springs periodically, which are unclean in the barns in winter. In the village, where unfavorable weather conditions are effective, the buffaloes that get unclean in the barns because they cannot be taken outside, are washed in the hot spring water for healthier and milk yield. In the region where the temperature drops to minus 20 degrees, buffaloes and horses brought to the hot spring covered with snow are washed in the water where the steam rises. (Photo by Sener Toktas/Anadolu Agency via Getty Images) 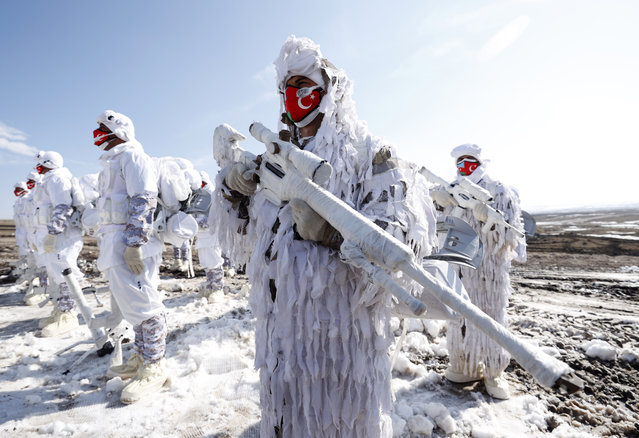 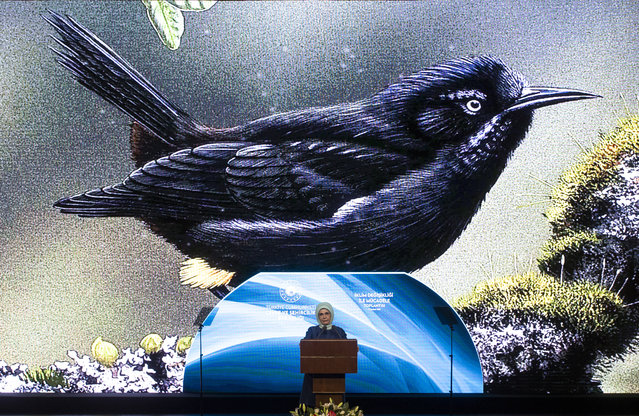 Turkey's first Lady Emine Erdogan makes a speech as she attends the “Meeting on Combating Climate Change” held by the Turkish Ministry of Environment and Urbanization at the Bestepe National Congress and Culture Center in Ankara, Turkey on February 17, 2021. (Photo by Aytac Unal/Anadolu Agency via Getty Images) 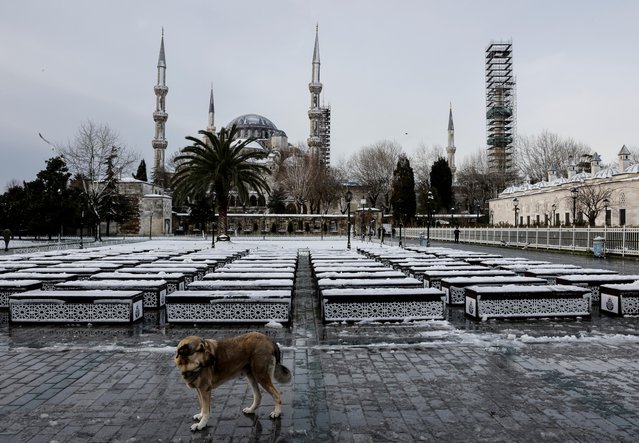 A stray dog stands in front of the Blue Mosque during a snowy day in Istanbul, Turkey, February 15, 2021. (Photo by Umit Bektas/Reuters) 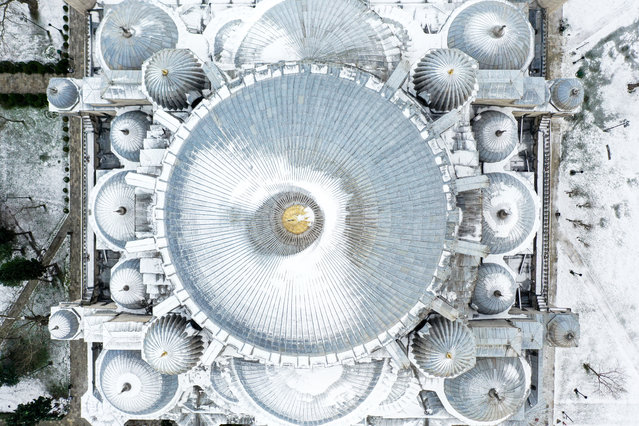 A drone photo shows an aerial view of the domes of Suleymaniye Mosque and its surroundings covered in snow following snowfall in Istanbul, Turkey on February 16, 2021. (Photo by Muhammed Enes Yildirim/Anadolu Agency via Getty Images) 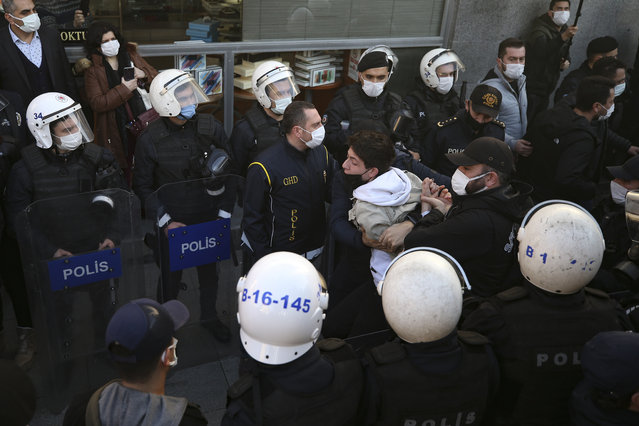 Riot police officers form a corridor as plainclothes police direct detained supporters of Bogazici University students following a protest in Istanbul, Thursday, February 4, 2021. For weeks, students and faculty members of Bogazici University have been protesting Turkey's President Recep Tayyip Erdogan's Jan. 1 appointment as a rector of Melih Bulu, an academic who once ran for parliament as a candidate for Erdogan's party. Some of the protests have erupted into clashes between police and demonstrators and hundreds of people have been detained, some taken away following raids of their homes. (Photo by Emrah Gurel/AP Photo) 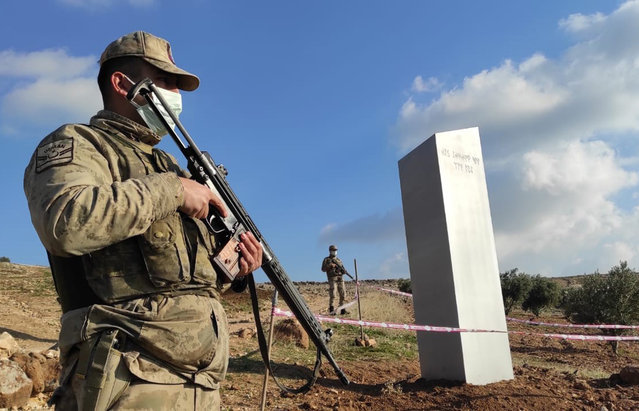 Turkish police officers guard a monolith, found on an open field near Sanliurfa, southeastern Turkey, Sunday, February 7, 2021. The metal block was found by a farmer Friday in Sanliurfa province with old Turkic script that reads "Look at the sky, see the moon." The monolith, 3 meters high (about 10 feet), was discovered near UNESCO World Heritage site Gobeklitepe with its megalithic structures dating back to 10th millennium B.C. Turkish media reported Sunday that gendarmes were looking through CCTV footage and investigating vehicles that may have transported the monolith. Other mysterious monoliths have popped up and some have disappeared in numerous countries since 2020. (Photo by Bekir Seyhanli/IHA via AP Photo) 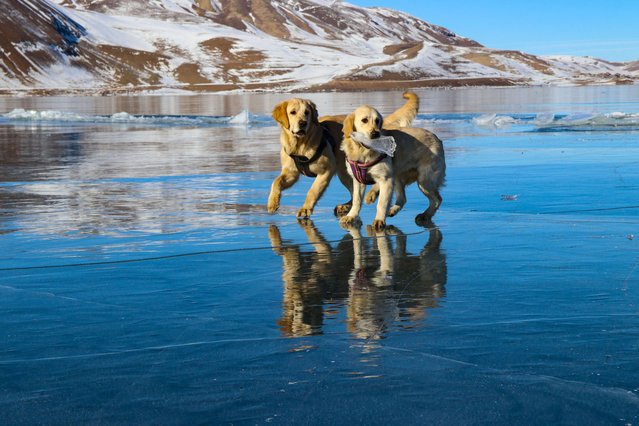 A view of Lake Balik as dogs playing on the ice-covered surface of the lake in Igdir province of Turkey on February 02, 2021. (Photo by Bulent Mavzer/Anadolu Agency via Getty Images) 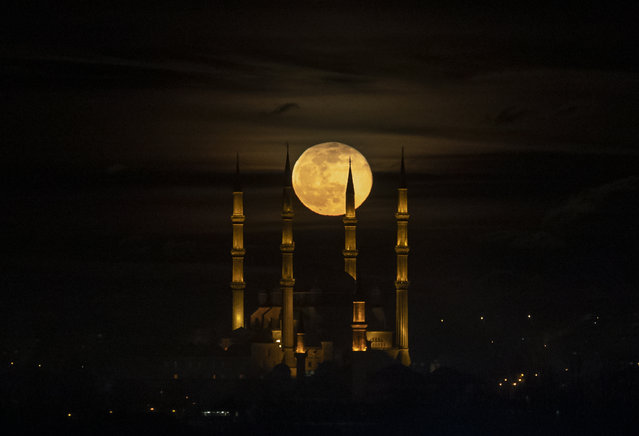 A full moon rises behind the Selimiye Mosque in Edirne, Turkey, 29 January 2021. (Photo by Erdem Sahin/EPA/EFE) 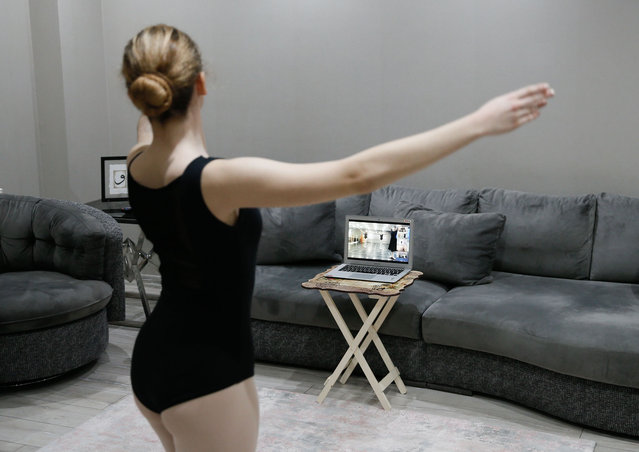 14 years old Duru Suyece practices ballet in their house's living room during her online ballet class due to the coronavirus (Covid-19) pandemic in Izmir, Turkey on January 28, 2021. (Photo by Omer Evren Atalay/Anadolu Agency via Getty Images) 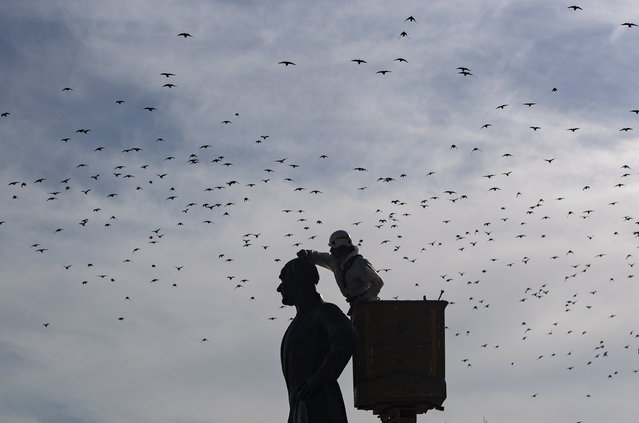 Nazim Can Cihan, a restorer of the IBB Miras (Istanbul Municipality Heritage) team, cleans Turkey's first Ataturk monument (20th century) at Sarayburnu on the Bosphorus from bird droppings during routine cleaning in Istanbul, Turkey, 04 January 2021. Istanbul has been a site of human settlement for around 3,000 years and nowadays it is a cradle of cultural and historical heritage points that plot the city's evolution over time. Byzantine churches, walls, and cisterns rub shoulders with Ottoman mosques, fountains, and tombs in the Turkish city that straddles Europe and Asia.
Some of the historic features of Istanbul have been neglected in recent years while others have fallen into ruin. It is a trend that specialists from Istanbul's cultural heritage department (IBB Miras) strive to buck. IBB Miras brings together experts in restoration, architecture, engineering, history, and visual arts, who want to breathe some life back into some of the city’s dilapidated gems. (Photo by Erdem Sahin/EPA/EFE) 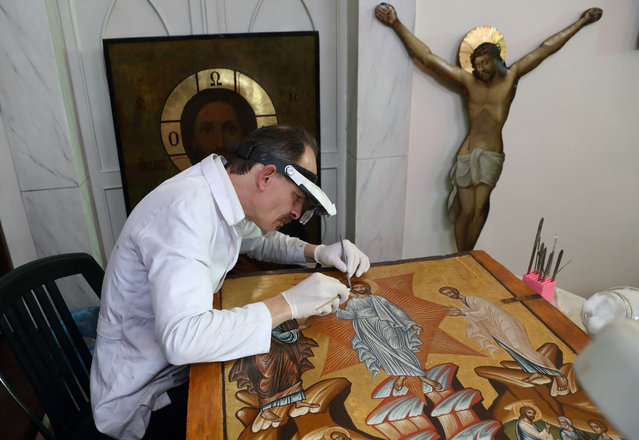 Venizelos Gavrilakis, a senior restorer and conservator from Thessaloniki, Greece, works to clean and restore a 16th century Byzantine Christian icon at a Greek Orthodox church where he set up his laboratory in Istanbul, Turkey on January 26, 2021. (Photo by Murad Sezer/Reuters) 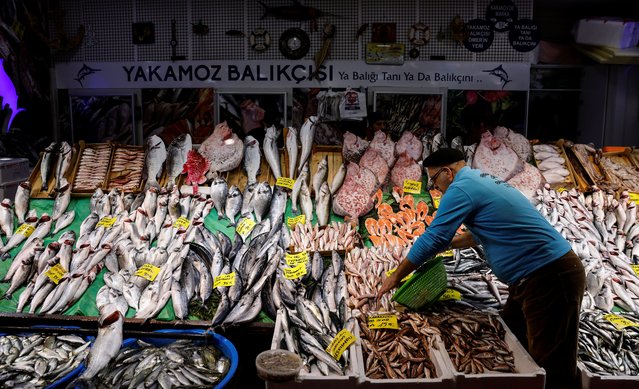 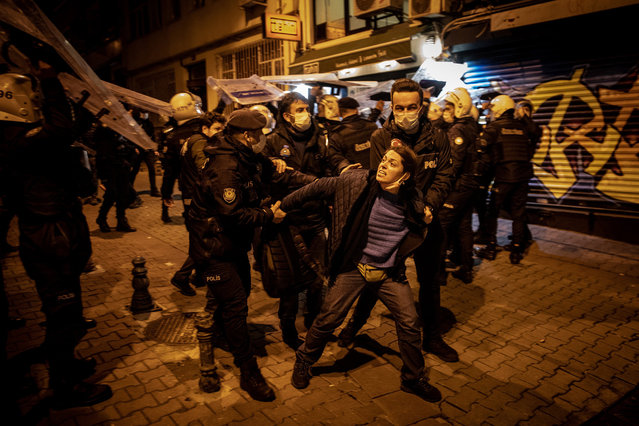 A woman is arrested by police during a protest against the appointment of new Bogazici University rector Melih Bulu in the Kadikoy district on February 2, 2021 in Istanbul, Turkey. Over the past month students have protested at the prestigious university after Turkey's President Recep Tayyip Erdogan appointed Melih Bulu as the new rector. The protests became further inflamed over the weekend after four people were arrested after hanging an artwork showing the holy site of Mecca and the LGBTQ rainbow flag opposite the rectors office. (Photo by Chris McGrath/Getty Images) 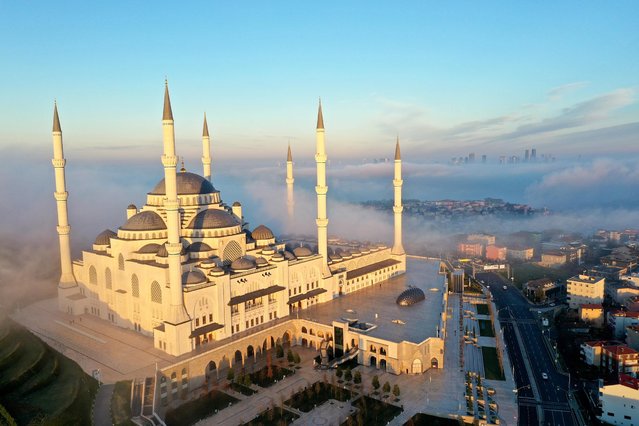