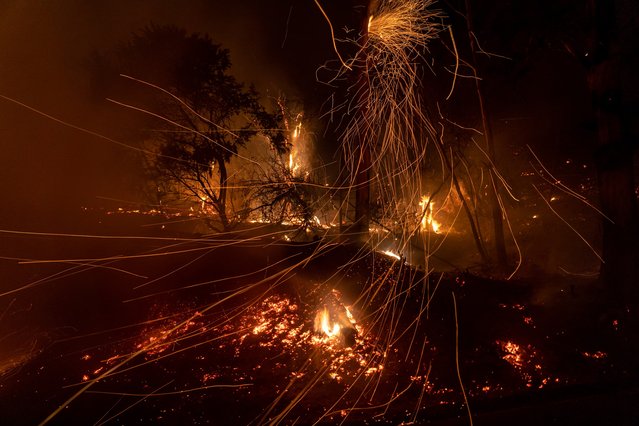 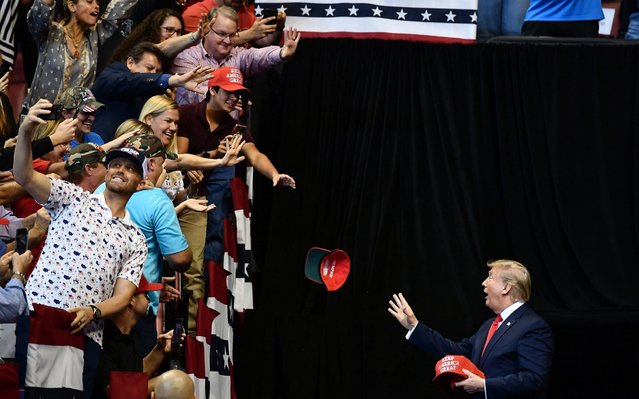 US President Donald Trump throughs MAGA caps to supporters as he arrives for a “Keep America Great” campaign rally at the BB&T Center in Sunrise, Florida on November 26, 2019. (Photo by Mandel Ngan/AFP Photo) 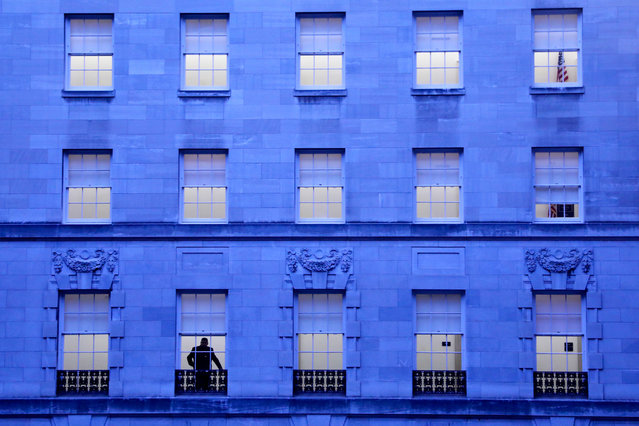 A man looks out a window in a seemingly empty Longworth House Office Building ahead of testimony by U.S. Army Lt. Col. Alexander Vindman, director for European Affairs at the National Security Council, and Jennifer Williams, a special adviser to Vice President Mike Pence for European and Russian affairs, before a House Intelligence Committee hearing as part of the impeachment inquiry into U.S. President Trump on Capitol Hill in Washington, U.S. November 19, 2019. (Photo by Jonathan Ernst/Reuters) 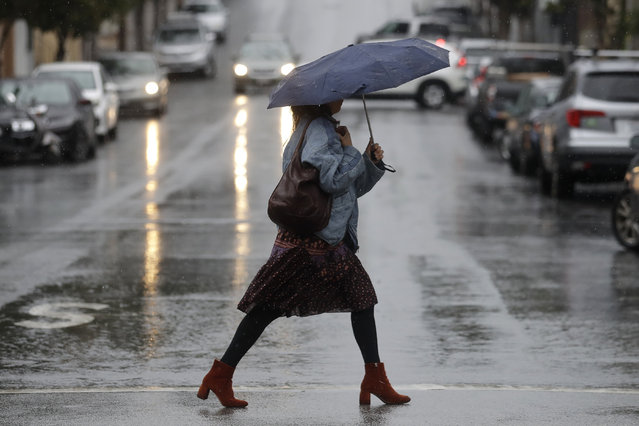 A woman carries an umbrella while walking in the rain in San Francisco, Tuesday, November 26, 2019. Northern California and southern Oregon residents are bracing for a “bomb cyclone” that's expected at one of the busiest travel times of the year. (Photo by Jeff Chiu/AP Photo) 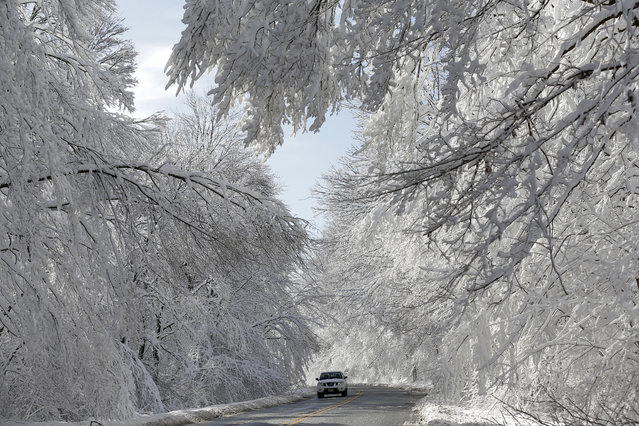 A car makes its way through a snowy landscape in Highland Falls, N.J., Tuesday, December 3, 2019. The last of the snow is falling over parts of New Jersey after leaving behind power outages in the northwest part of the state. (Photo by Seth Wenig/AP Photo) 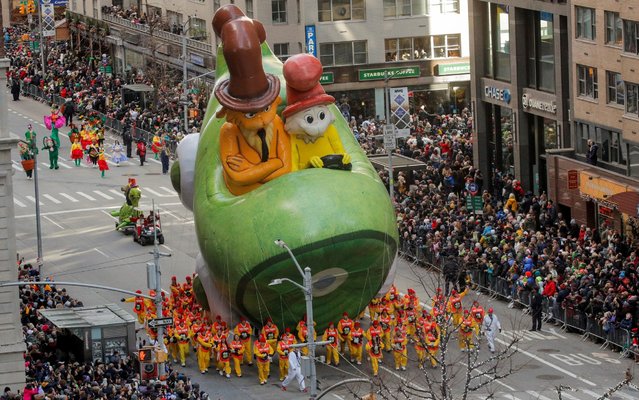 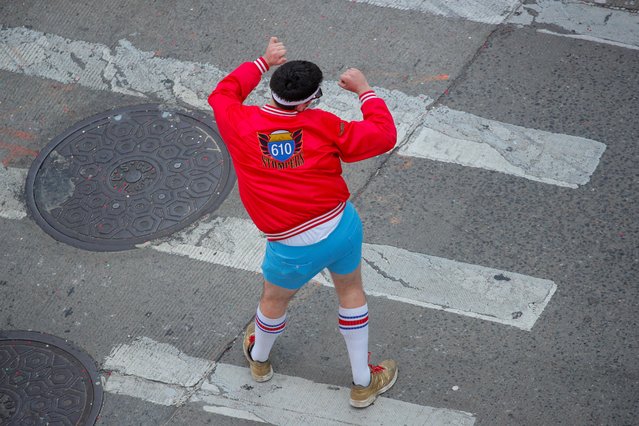 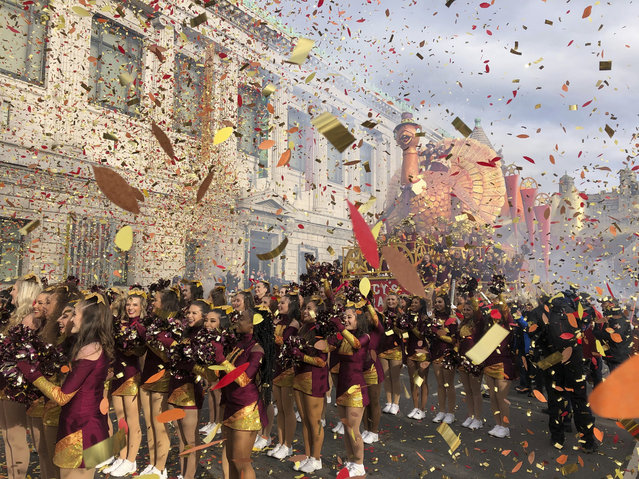 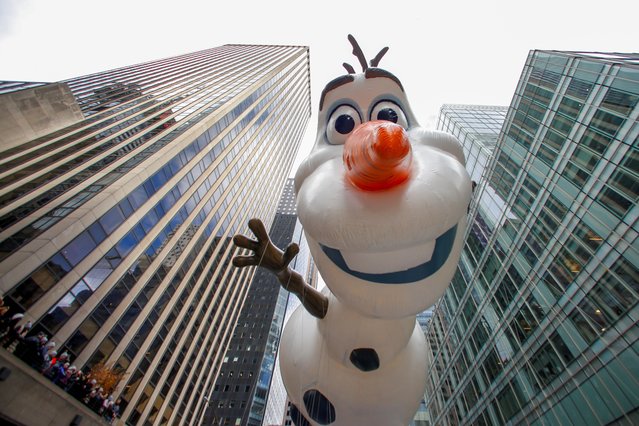 The Olaf from Frozen balloon hovers above the crowd during the 93rd Macy's Thanksgiving Day Parade in New York, U.S., November 28, 2019. (Photo by Caitlin Ochs/Reuters) 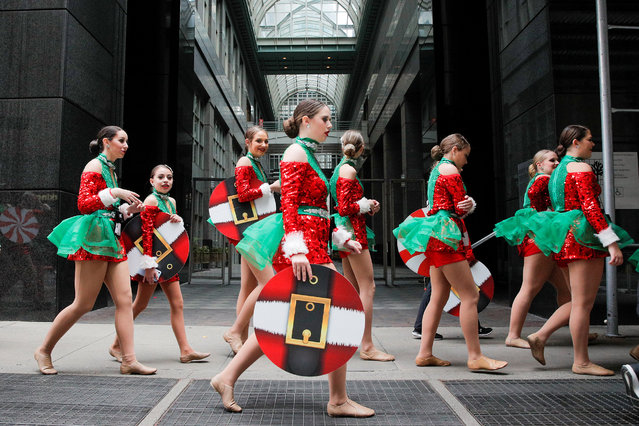 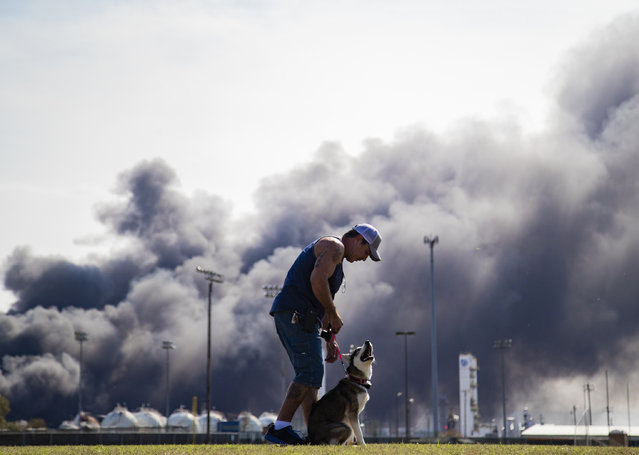 Ray Moore trains his dog Aries with a cloud of smoke in the background from the TPC Group Port Neches Operations explosion on Wednesday, November 27, 2019, in Port Neches, Texas. Multiple workers were injured early Wednesday in a massive explosion at a Texas chemical plant that also blew out the windows and doors of nearby homes. (Photo by Marie D. De Jesús/Houston Chronicle via AP Photo) 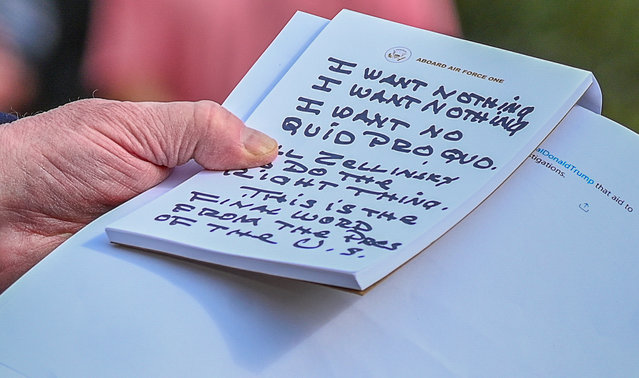 U.S. President Donald Trump holds what appears to be a prepared statement and handwritten notes after watching testimony by U.S. Ambassador to the European Union Gordon Sondland as he speaks to reporters prior to departing for travel to Austin, Texas from the South Lawn of the White House in Washington, U.S., November 20, 2019. (Photo by Erin Scott/Reuters) 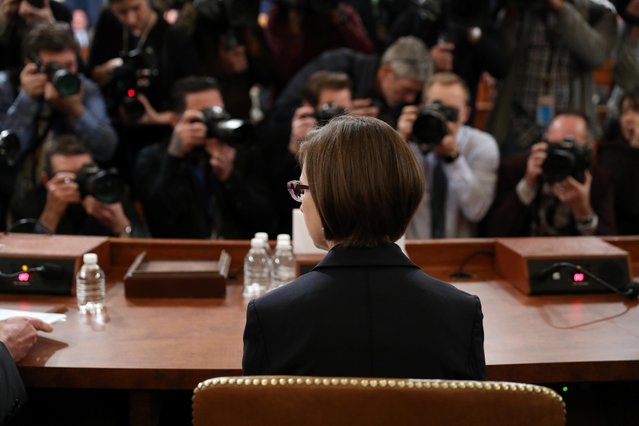 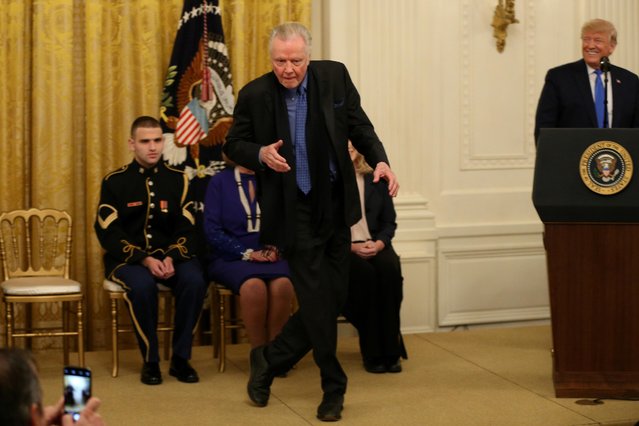 Actor Jon Voight dances to music before being awarded the National Medal of Arts by U.S. President Donald Trump inside the East Room of the White House in Washington, U.S., November 21, 2019. (Photo by Tom Brenner/Reuters) 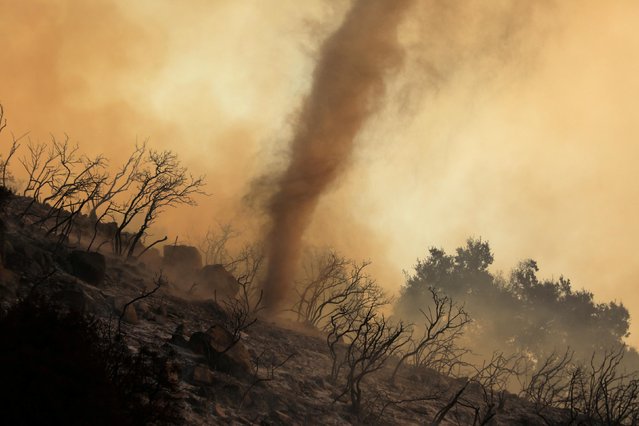 A whirlwind of hot ash and embers moves through a wildfire, dubbed the Cave Fire, burning in the hills of Santa Barbara, California, U.S., November 26, 2019. (Photo by David McNew/Reuters) 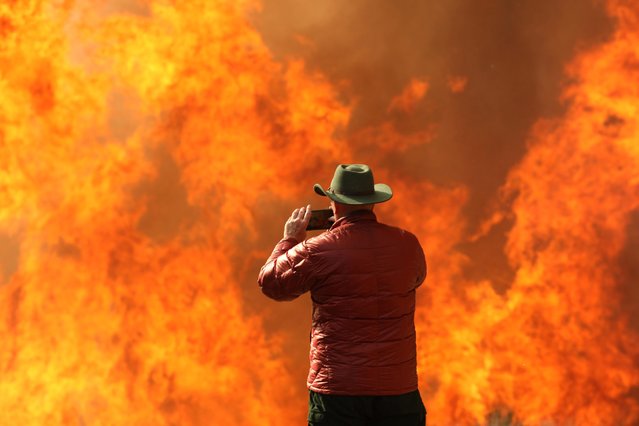 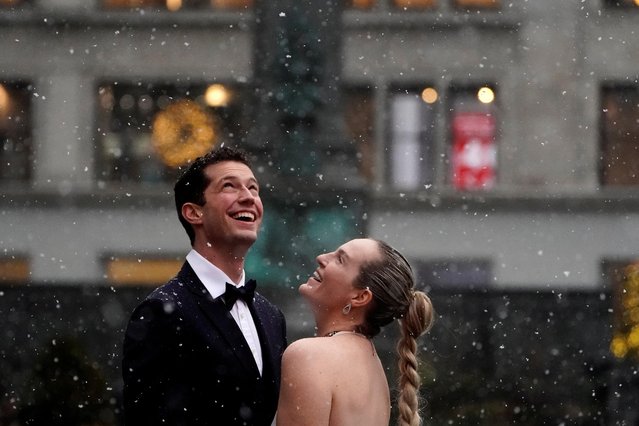 People pose for photos in the snow in the Manhattan borough of New York City, New York, U.S., December 2, 2019. (Photo by Carlo Allegri/Reuters) 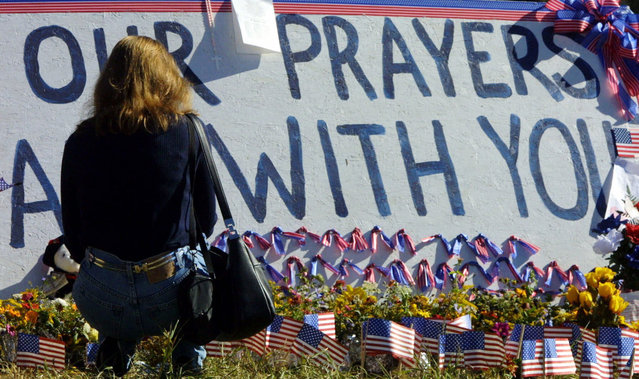 In this September 16, 2001, file photo, flight attendant Susan Udvari pauses at a memorial near the crash site of United Airlines Flight 93, in Shanksville, Pa. The London residents who used a fire extinguisher and even a 5-foot (1.52 meter) narwhal tusk Friday, Nov. 29, 2019, to fight back against an attacker who stabbed two people to death and wounded three others was a reminder of how ordinary people can take extraordinary actions in efforts to save themselves and others. On Sept. 11, 2001, people aboard the plane tried to wrest control of the cockpit. (Photo by Gary Tramontina/AP Photo/File) 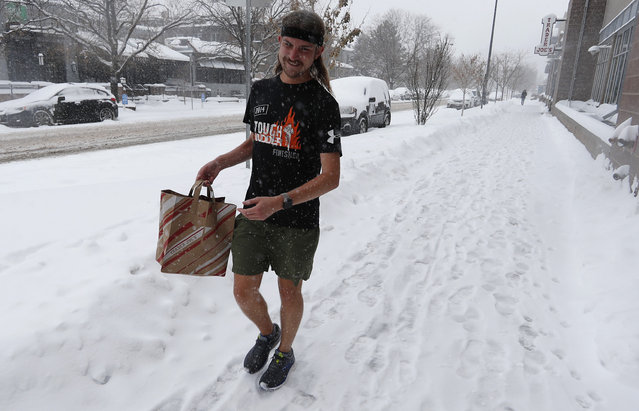 Ryan Lusk, a native of Duluth, Miin., who nows lives in Denver, heads out of a grocery store with his purchases as a storm packing snow and high winds sweeps in over the region Tuesday, November 26, 2019, in Denver. Stores, schools and government offices were closed or curtailed their hours while on another front, Thanksgiving Day travellers were forced to wrestle with snow-packed roads and flight delays or cancellations throughout the intermountain West. (Photo by David Zalubowski/AP Photo) 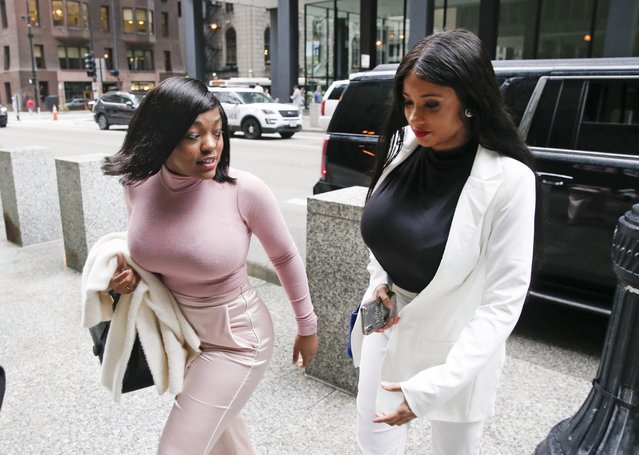 Supporters of singer R. Kelly, Joycelyn Savage and Azriel Clary arrive for the singer's arraignment at the Dirksen Federal Building on July 16, 2019 in Chicago, Illinois. (Photo by Nuccio DiNuzzo/Getty Images) 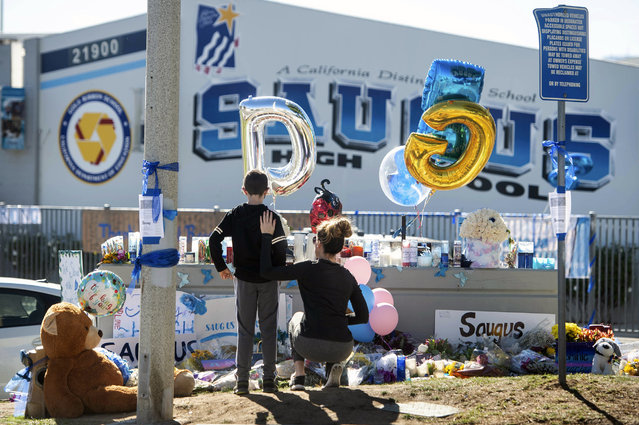 Michelle Bosshard and her 9-year-old son Lucas visit a memorial, Monday, November 18, 2019, for two students killed during a shooting at Saugus High School in Santa Clarita, Calif., days before. The Bosshards, who live in the neighborhood, know a handful of kids who were hiding during the shooting. The students will return to school on Dec. 2. (Photo by Sarah Reingewirtz/The Orange County Register via AP Photo) 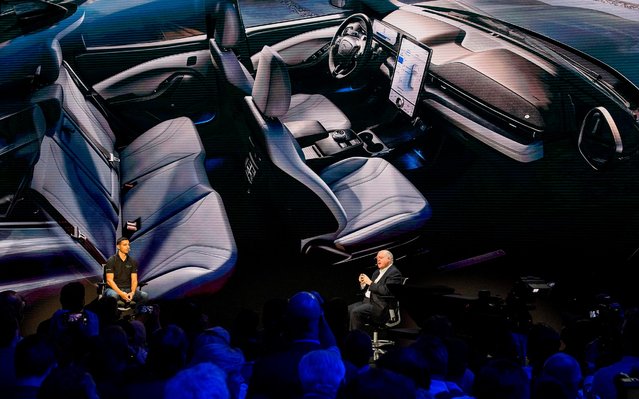 Ford CEO James Hackett (C) reveals the company's first mass-market electric car the Mustang Mach-E, which is an all-electric vehicle that bears the name of the company’s iconic muscle car at a ceremony in Hawthorne, California on November 17, 2019. This is Ford's first serious attempt at making a long-range EV and will be the flagship of a new lineup that will include an electric F-150 pickup truck. (Photo by Mark Ralston/AFP Photo) 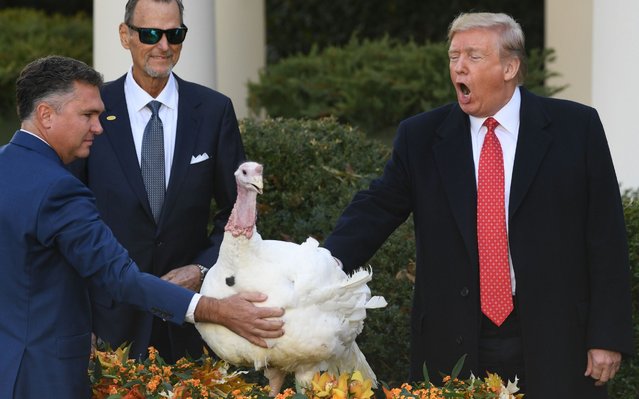 US President Donald Trump pardons the National Thanksgiving Turkey during a ceremony in the Rose Garden of the White House in Washington, DC on November 26, 2019. (Photo by Saul Loeb/AFP Photo) 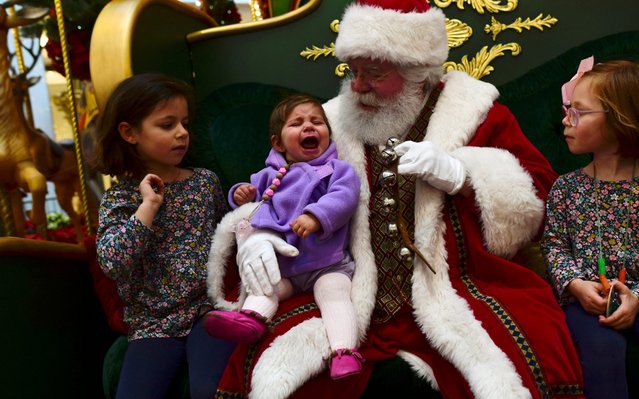