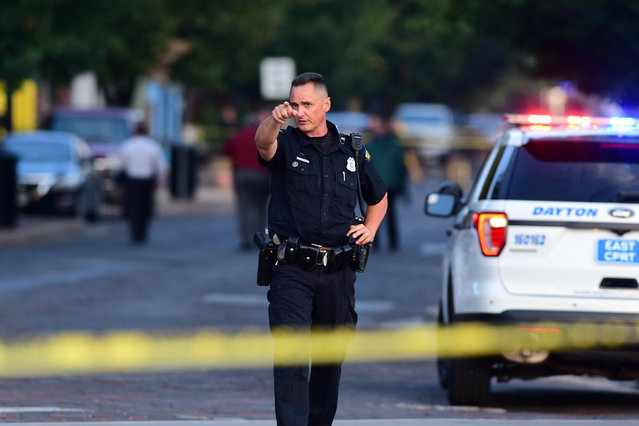 Police officers at the crime scene in Dayton, Ohio, USA, 04 August 2019 following the mass shooting in the Oregon district of Dayton. Media reports state that nine people have been killed and many more injured after a gunman opened fired outside a bar in Dayton. Police confirmed they killed the gunman at the scene. (Photo by Tom Russo/EPA/EFE/Rex Features/Shutterstock) 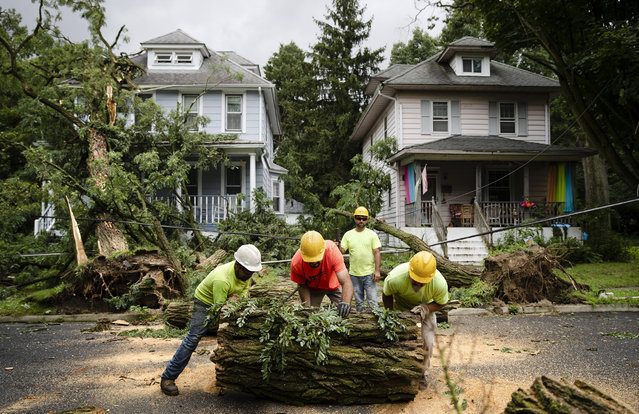 Arborist with the Dependable Tree Company work to remove a tree downed in a recent storm in Collingswood, N.J., Tuesday, July 23, 2019. Crews are working to restore electricity for hundreds of thousands of people in New Jersey after powerful storms blew across the state the day before. (Photo by Matt Rourke/AP Photo) 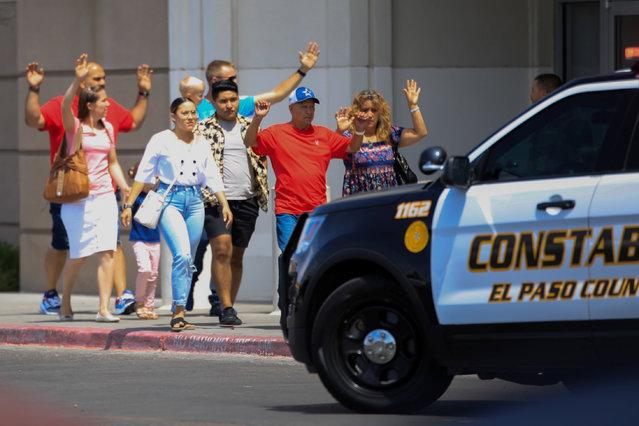 Shoppers exit with their hands up after a mass shooting at a Walmart in El Paso, Texas, U.S. on August 3, 2019. Multiple people were killed and one person was in custody after a shooter went on a rampage at a shopping mall, police in the Texas border town of El Paso said. (Photo by Jorge Salgado/Reuters) 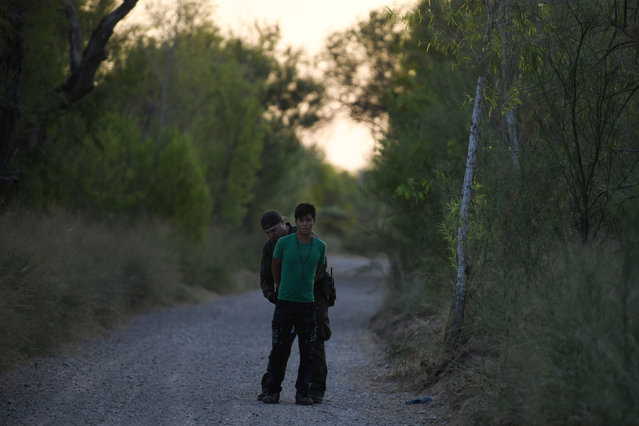 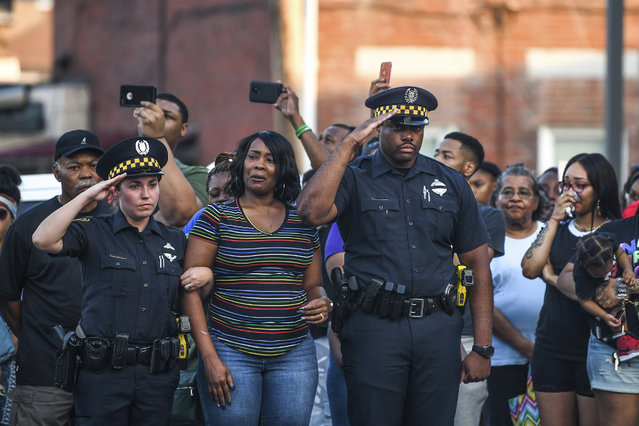 Pittsburgh police Officers Jamie Pacucci, left, and Reggie Eiland, right, both in Zone 1, comfort Angel Warren, center, the fiancee of slain Pittsburgh police Officer Calvin Hall, who died Wednesday, July 17 after being shot while off duty in Homewood, Pa., as she reacts to the call over the police scanner announcing the end of watch of Officer Hall during a ceremony in front of the Zone 1 police station, Saturday, July 20, 2019, on the North Side of Pittsburgh. (Photo by Alexandra Wimley/Pittsburgh Post-Gazette via AP Photo) 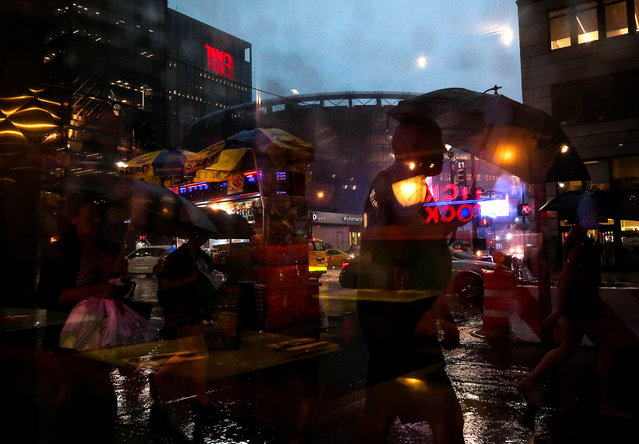 People shelter from the rain beneath their umbrellas on a rainy day in New York, USA, on July 22, 2019. (Photo by Atilgan Ozdil/Anadolu Agency via Getty Images) 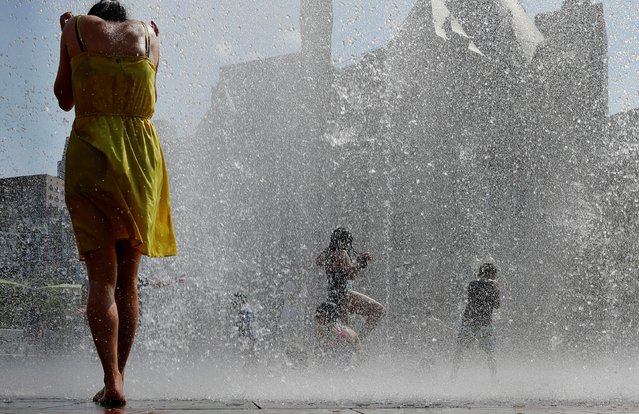 Kids and adults cool off in a fountain on the Rose Kennedy Greenway on the first day of a forecasted summer heatwave in Boston, Massachusetts, U.S., July 19, 2019. (Photo by Brian Snyder/Reuters) 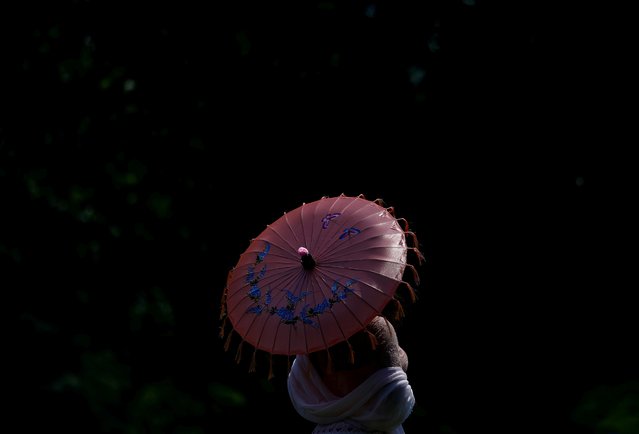 A woman holds an umbrella in Lafayette Park near the White House during a heat wave in Washington, U.S., July 20, 2019. (Photo by Eric Thayer/Reuters) 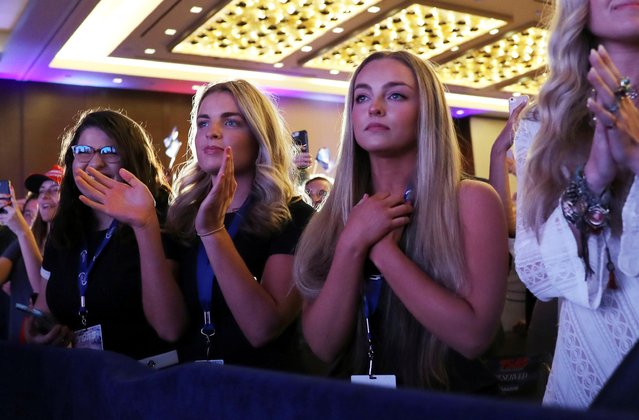 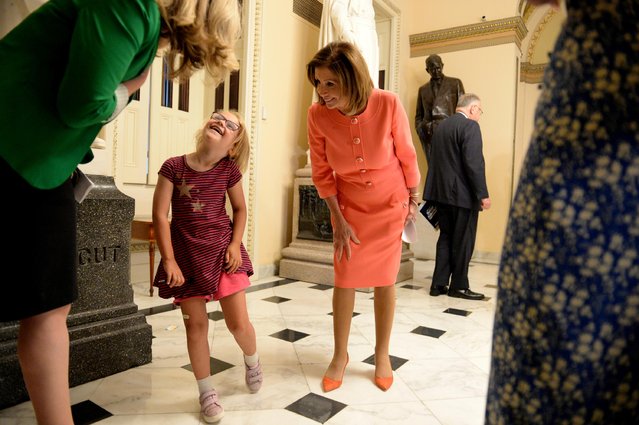 U.S. Speaker of the House Nancy Pelosi (D-CA) greets Rep. Abigail Spanberger (D-VA), and a young visitor (who told Pelosi that she was going to be a member of Congress) at the U.S. Capitol in Washington, U.S., July 25, 2019. (Photo by Mary F. Calvert/Reuters) 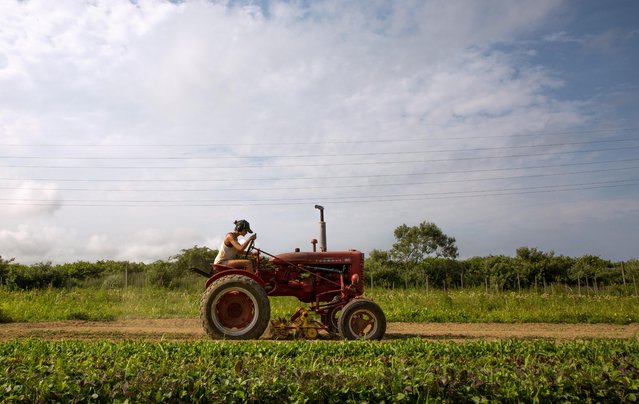 Farmer Isabel Milligan drives a tractor as she weeds and transplants crops on the farm in Amagansett, New York, U.S., July 11, 2019. Women and non-binary people are part of a growing cadre of gender-diverse college graduates in their 20s and 30s who are changing the face of organic agriculture, running some of the best-known organic farms on Long Island. (Photo by Lindsay Morris/Reuters) 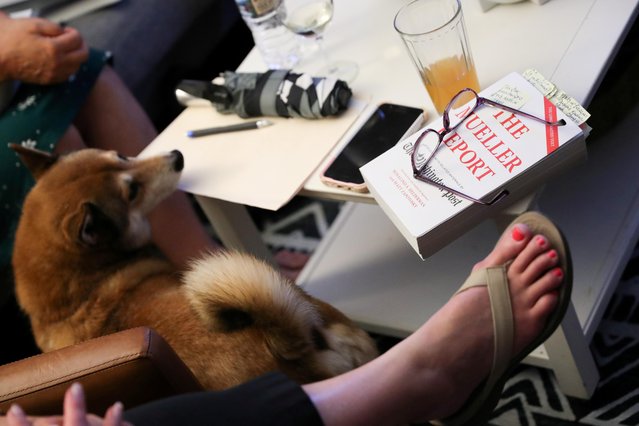 Book club member Sharon Wunder’s dog walks past her copy of the Mueller Report as she joins other book club members, who found one another through the action network “Herndon-Reston Indivisible”, to discuss the Mueller Report over snacks at her home in Herndon, Virginia, U.S. July 24, 2019. The dark cloud of investigations and impeachment has threatened President Donald Trump for many months, with Democrats in the U.S. House of Representatives, where any such effort to remove Trump from office would begin, divided about whether to proceed. (Photo by Jonathan Ernst/Reuters) 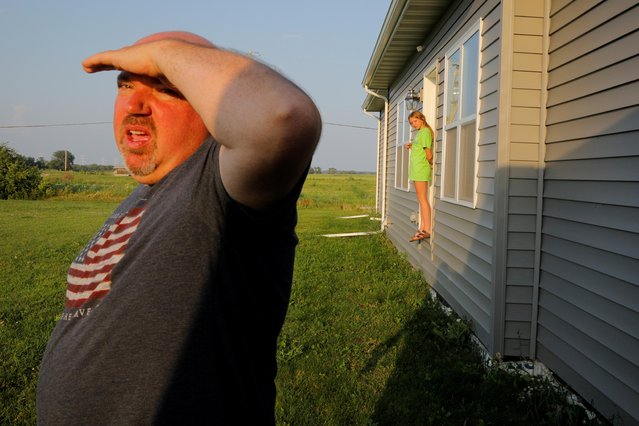 Jim Mahoney looks out from his yard towards the construction of the Foxconn manufacturing complex, after he and his wife Kim refused to sell their home and property to Foxconn, in the Racine County city of Mt. Pleasant, Wisconsin, U.S., July 27, 2019. (Photo by Brian Snyder/Reuters) 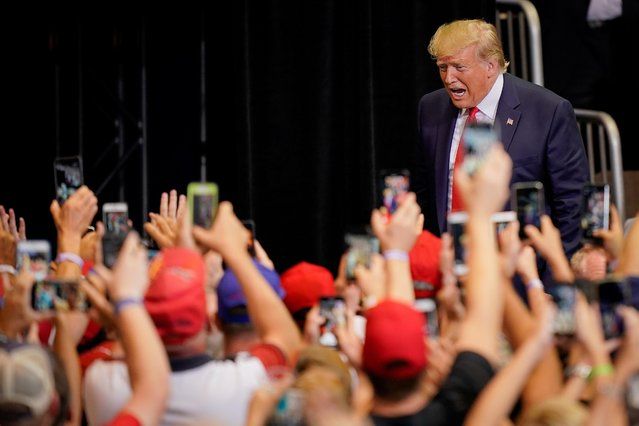 U.S. President Donald Trump greets supporters as he arrives at a campaign rally for in Cincinnati, Ohio. U.S., August 1, 2019. (Photo by Bryan Woolston/Reuters) 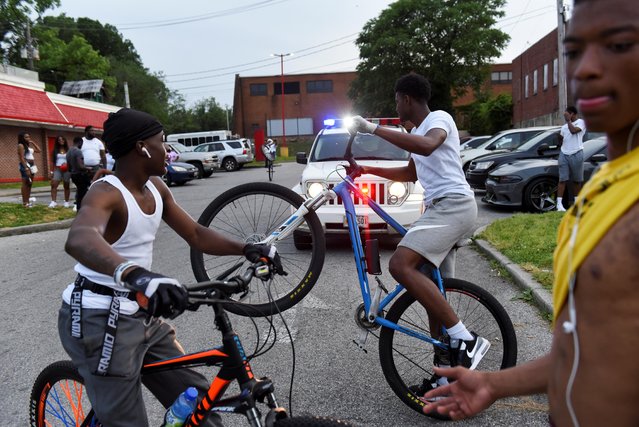 Young people ride their bikes near a police car while they gather in the parking lot of Hip Hop Chicken in Baltimore, Maryland, U.S., May 26, 2019. Each Sunday the bikers gather to ride their bikes and hang out in a loosely affiliated group of bikers. (Photo by Stephanie Keith/Reuters) 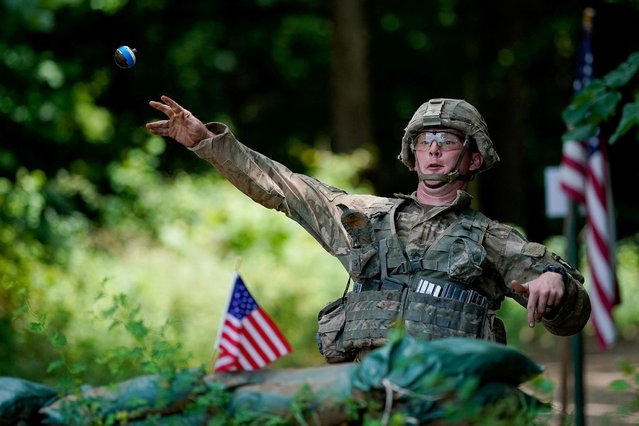 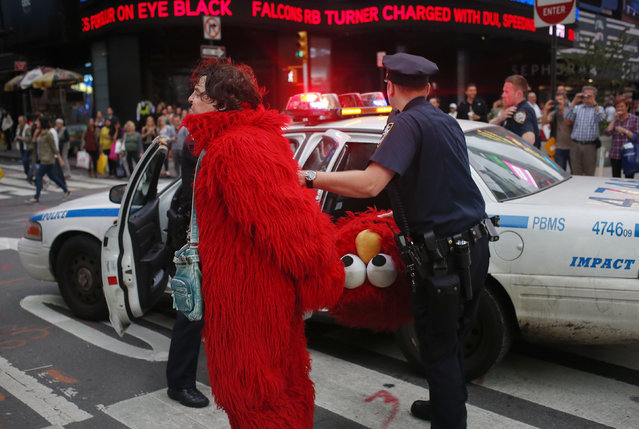 A man, dressed as the Muppet character Elmo, is arrested in New York's Times Square September 18, 2012. The arrest took place after a loud verbal exchange between the man and tourists, witnesses said. The police at the scene did not give a reason for the arrest. (Photo by Adrees Latif/Reuters) 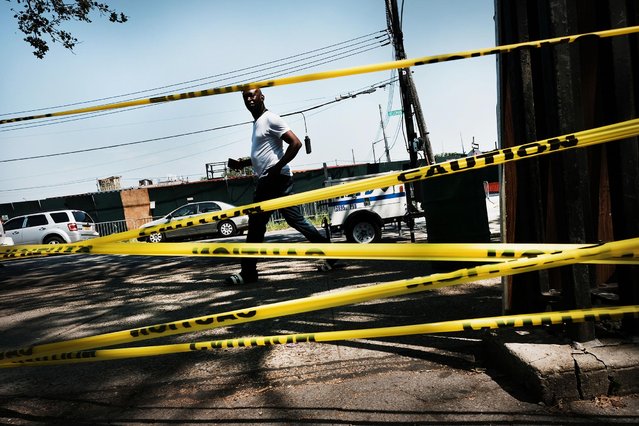 A man walks by police tape in the Brownsville neighborhood in Brooklyn where one person was shot and killed and 11 others were injured after two or more shooters opened fire during a massive block party on July 29, 2019 in New York City. Gunfire erupted during an annual community celebration, the Old Timers Event, which was being held at a playground and park. While crime has gone down in New York City overall, certain sections of Brooklyn have witnessed a spike in shootings and murders. Police are still looking for the shooters. (Photo by Spencer Platt/Getty Images) 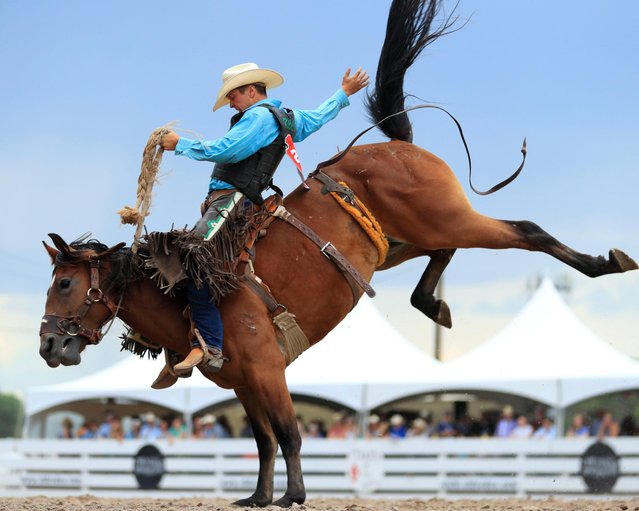 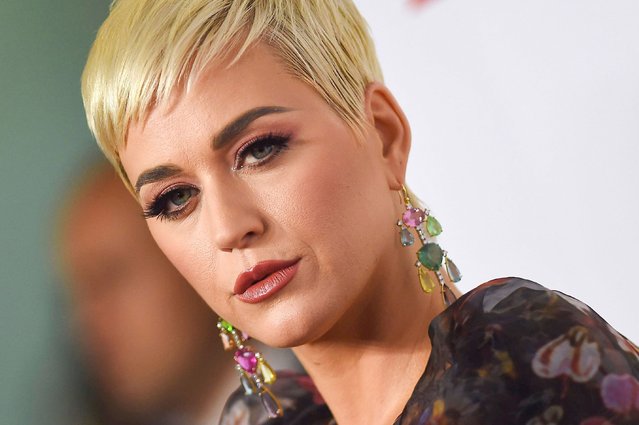 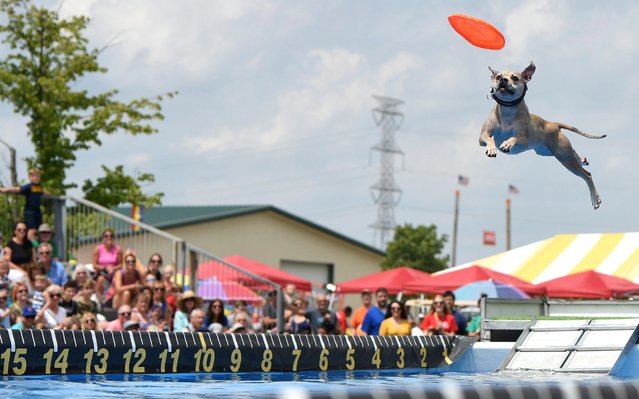 Coconut makes an attempt at catching a Frisbee while jumping for distance over a pool during the Canine Stars show during the Lake County Fair, Friday, July 26, 2019, in Grayslake, Ill. All dogs in the show are rescues. (Photo by Rick West/Daily Herald via AP Photo) 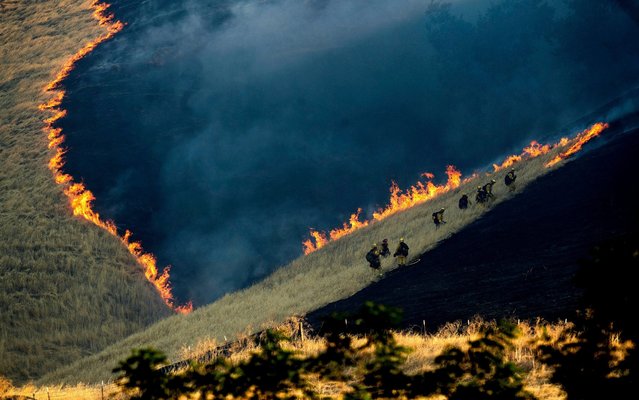 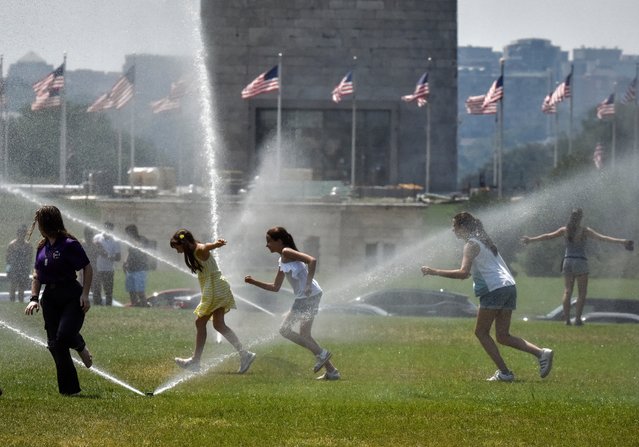 Visitors take a run through a sprinkler on the Mall during another day of triple-digit heat in Washington, D.C. on July 21, 2019. (Photo by Bill O'Leary/The Washington Post) 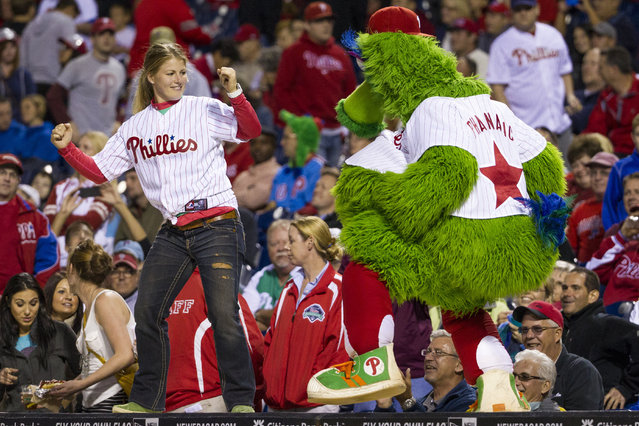 This September 16, 2013. file photo shows the Phillies Phanatic dancing with a fan on the dugout during the eighth inning of a baseball game in Philadelphia. The Philadelphia Phillies have sued the New York company that created the Phanatic mascot to prevent the green fuzzy fan favorite from becoming a free agent. In a complaint filed Friday, August 2, 2019, in U.S. District Court in Manhattan, the team alleged Harrison/Erickson threatened to terminate the Phillies' rights to the Phanatic next year and “make the Phanatic a free agent” unless the team renegotiated its 1984 agreement to acquire the mascot’s rights. (Photo by Chris Szagola/AP Photo/File)
Edit Del
06 Aug 2019 00:05:00, post received 0 comments
Publication archive:
←   →
Popular tags:
All tags
Last searches: