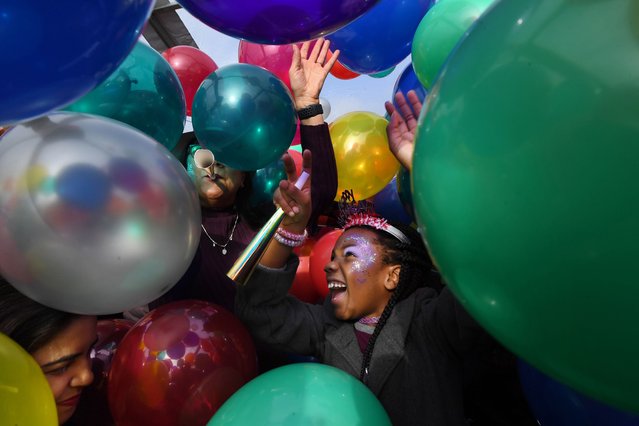 Essence Merritt, 8, is engulfed by a balloon drop during “Noon Yards Eve”, event that gives families the opportunity to celebrate the upcoming new year at an earlier hour, at the Yards Park in Washington, D.C. on December 31, 2019. (Photo by Matt McClain/The Washington Post) 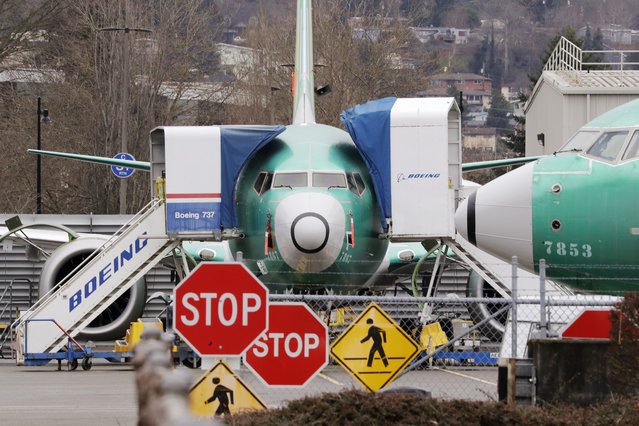 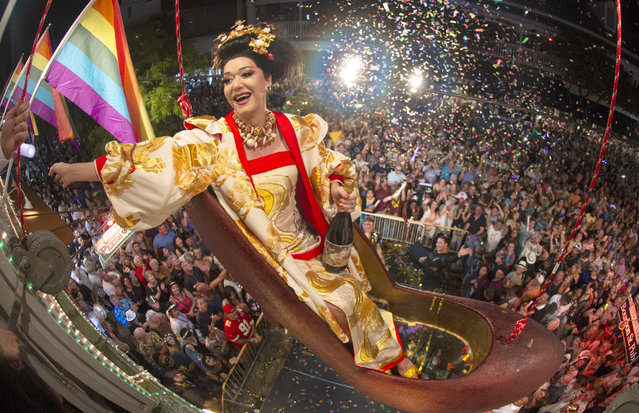 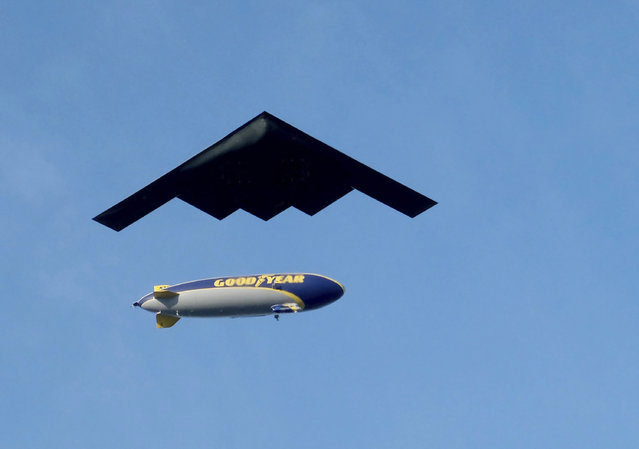 The B-2 Spirit military aircraft passes under the Goodyear airship above Colorado Boulevard during the Rose Parade in Pasadena, Calif., Wednesday, January 1, 2020. (Photo by Dean Musgrove/The Orange County Register via AP Photo) 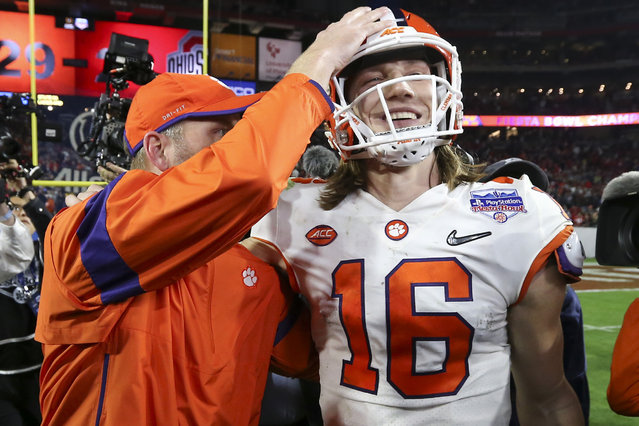 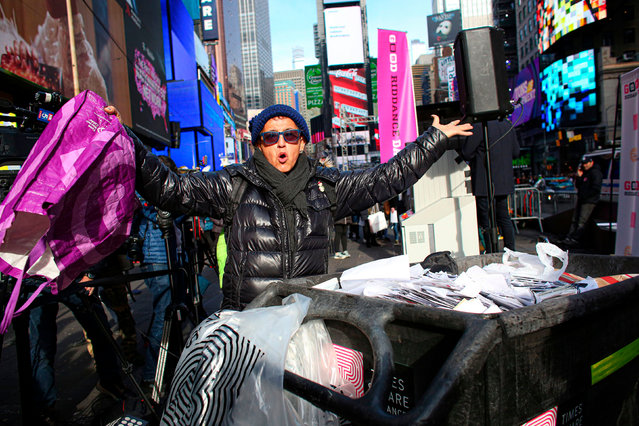 A woman reacts after throwing papers containing hard memories of 2019 in a dumpster during the 13th annual Good Riddance Day in Times Square on December 28, 2019 in New York City. The annual event let people toss, shred, and smash any unpleasant, embarrassing, and unwanted memories from the past year so they can start fresh in 2020. (Photo by Kena Betancur/AFP Photo) 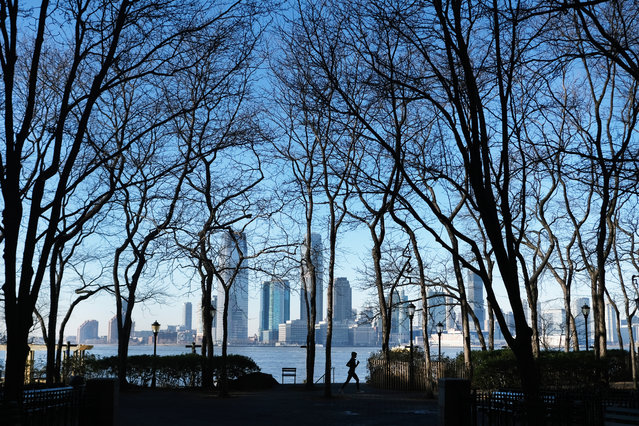 People enjoy the unseasonably warm weather at the beginning of the Christmas and Hanukkah holiday week on December 23, 2019 in New York City. New York City, and much of the East Coast, is experiencing consecutive days of sunshine and warm temperatures. (Photo by Spencer Platt/Getty Images) 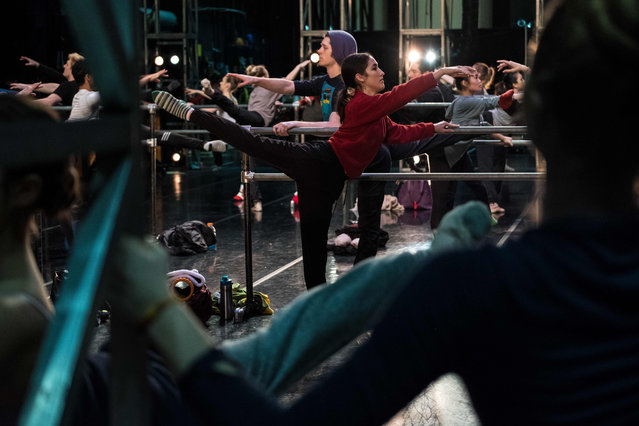 Miranda Dafoe warms up before her performance as the Nutcracker in Dayton Ballet's production of “The Nutcracker” in Dayton, Ohio on December 21, 2019. For the first time in professional dance history, according to Dayton Ballet's artistic director, a female, 23-year-old ballet dancer Miranda Dafoe, has been cast in the role of the Nutcracker. Once Dafoe's nutcracker head is removed during the performance, her identity as a female soldier is revealed and she becomes a guiding or motherly figure to Clara. (Photo by Megan Jelinger/AFP Photo) 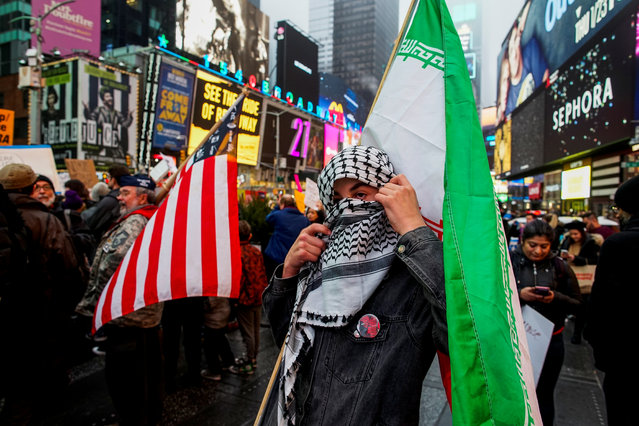 A man covers his face as people take part in an anti-war protest amid increased tensions between the United States and Iran at Times Square in New York, U.S., January 4, 2020. (Photo by Eduardo Munoz/Reuters) 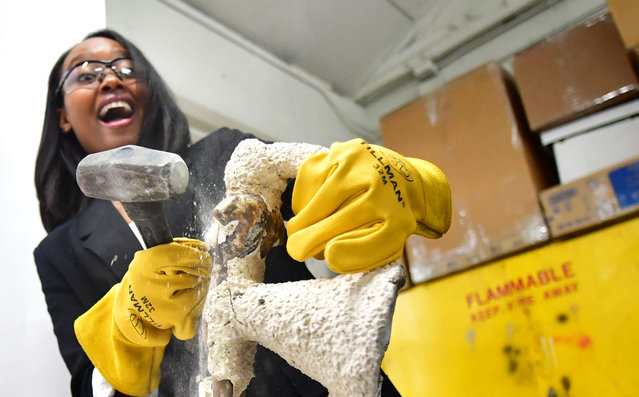 Actress Ashleigh LaThrop reacts while breaking the mould of the statue of the Screen Actors Guild (SAG) Award known as “the Actor” at the American Fine Arts Foundry on January 7, 2020 in Burbank, California, where the statues are made for presentation to winners at the 26th Screen Actors Guild (SAG) Awards which takes place on January 19, 2020 in Los Angeles. (Photo by Frederic J. Brown/AFP Photo) 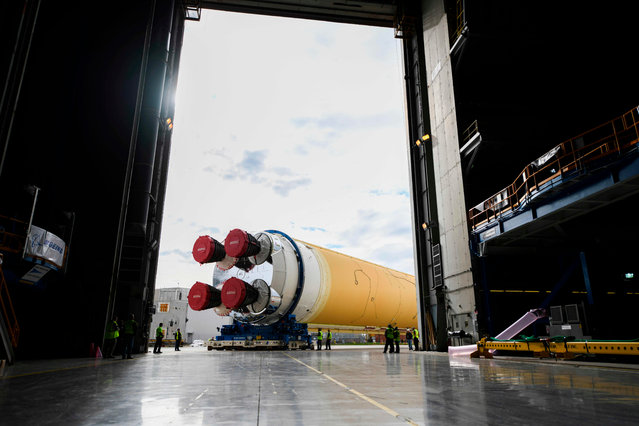 This NASA photo released on January 6, 2020 shows NASA’s powerful new rocket, the Space Launch System (SLS), which will send astronauts a quarter million miles from Earth to lunar orbit at the Michoud Assembly Facility in New Orleans, Louisiana. The agency is committed to landing American astronauts, including the first woman and the next man, on the Moon by 2024. (Photo by Jude Guidry/NASA/AFP Photo) 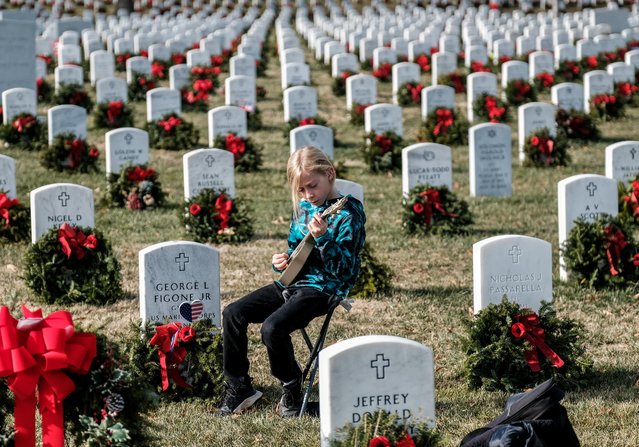 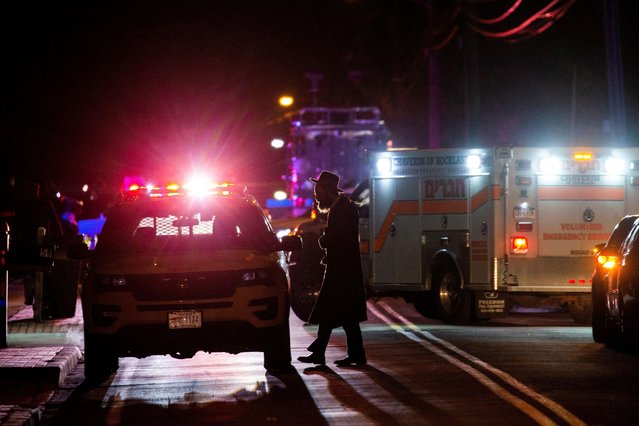 A Jewish man walks near the area where 5 people were stabbed at a Hasidic rabbi's home in Monsey, New York, U.S., December 29, 2019. (Photo by Eduardo Munoz/Reuters) 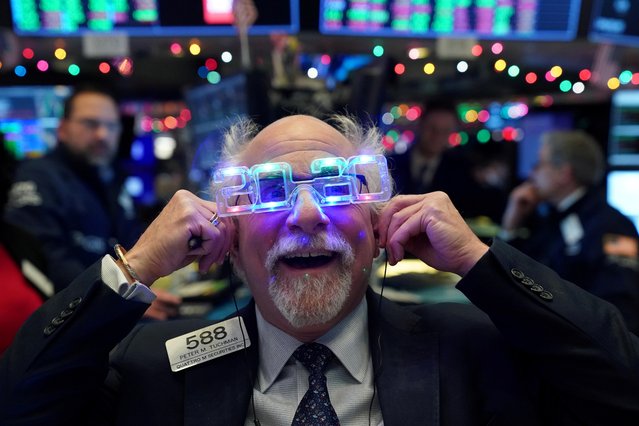 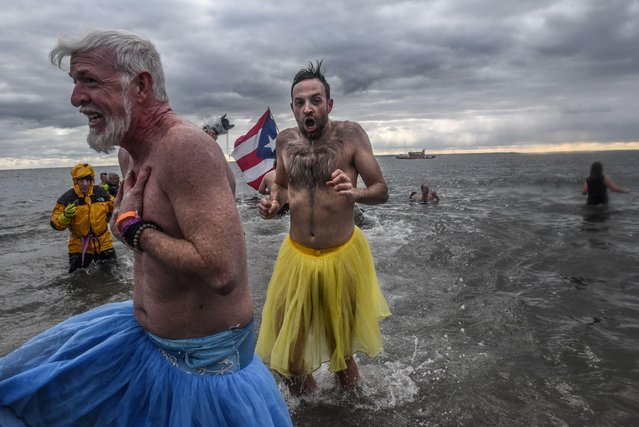 People run into the Atlantic ocean during the annual Polar Bear plunge at Coney Island in New York, January 1, 2020. (Photo by Stephanie Keith/Reuters) 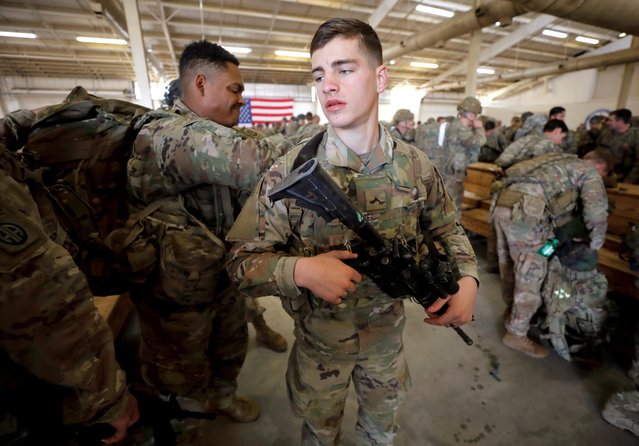 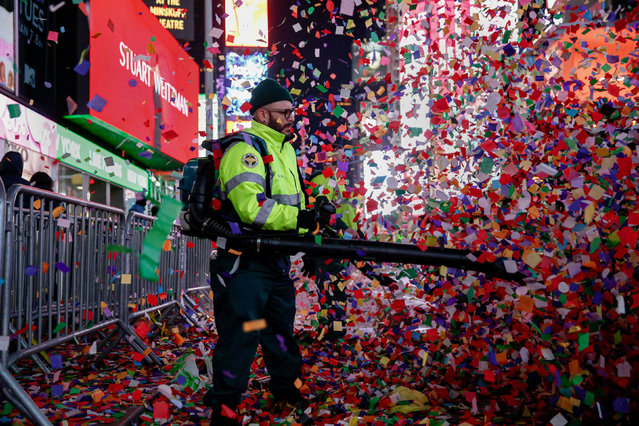 A New York City Department of Sanitation worker cleans the streets after the New Year celebrations in Times Square in the Manhattan borough of New York City, U.S., January 1, 2020. (Photo by Amr Alfiky/Reuters) 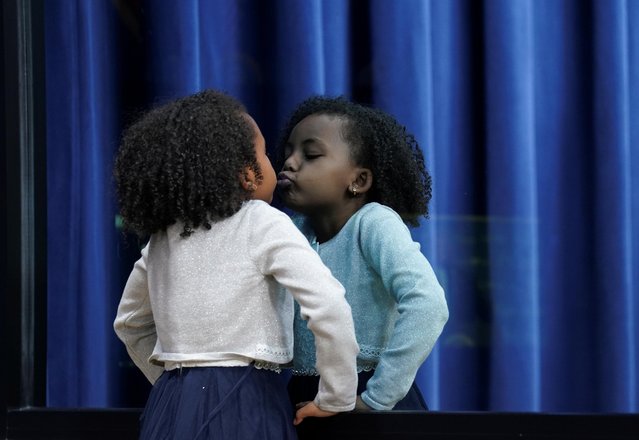 Elgrace Bereket, 4, kisses her reflection on mirrored glass while onstage with U.S. President Donald Trump, who was addressing a summit on child care and paid leave at the White House in Washington, U.S., December 12, 2019. (Photo by Kevin Lamarque/Reuters) 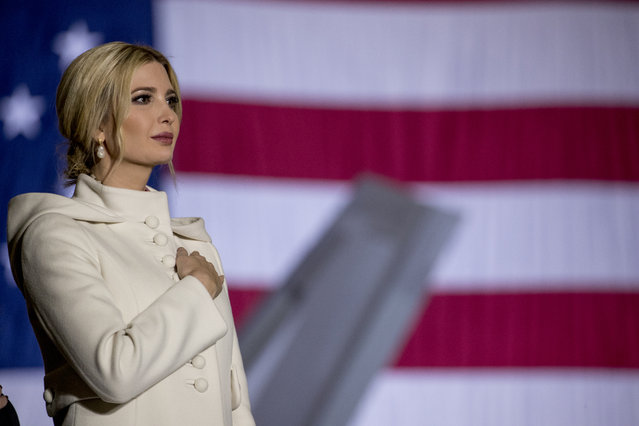 Ivanka Trump, the daughter of President Donald Trump, stands on stage during the playing of the National Anthem before President Donald Trump signs the National Defense Authorization Act for Fiscal Year 2020 at Andrews Air Force Base, Md., Friday, December 20, 2019, before traveling to Mar-a-lago in Palm Beach, Fla. (Photo by Andrew Harnik/AP Photo) 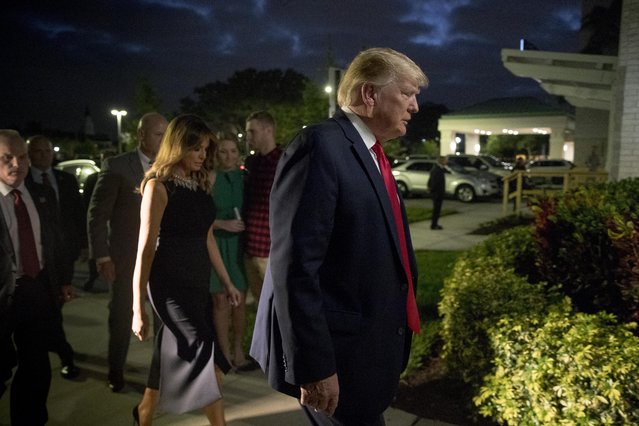 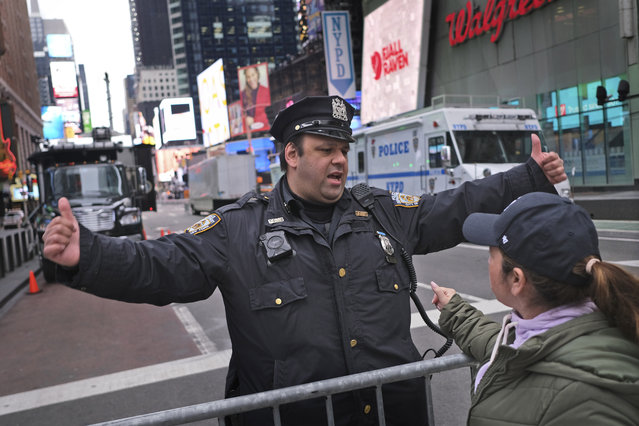 A police officer directs pedestrians through Times Square in New York on New Year's Eve, Tuesday, December 31, 2019. Revelers around the globe are bidding farewell to a decade that will be remembered for the rise of social media, the Arab Spring, the #MeToo movement and, of course, President Donald Trump. (Photo by Seth Wenig/AP Photo) 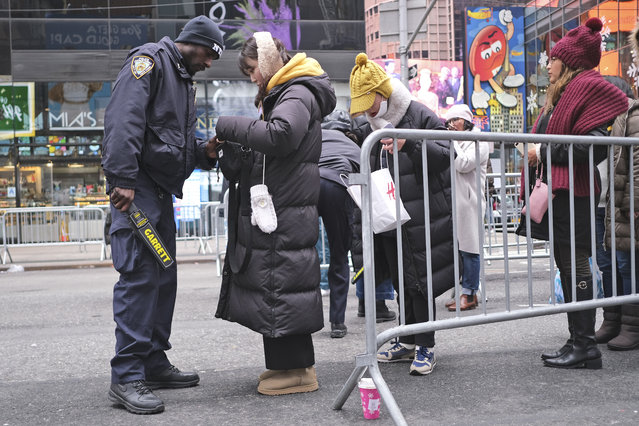 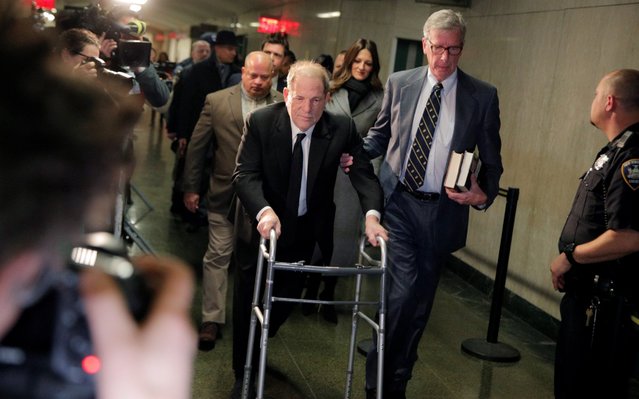 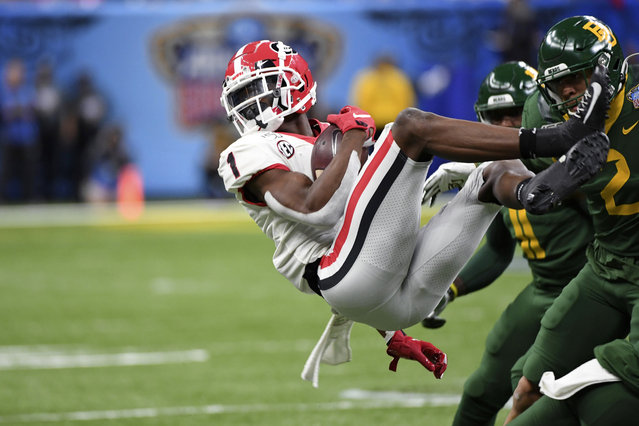 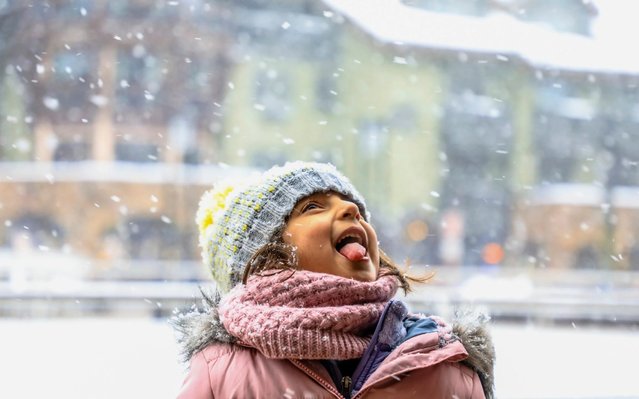 Raya Ramchand, 5, of McKinney, Texas, catches snowflakes on her tongue on a snowy Christmas Day in Vail, Colo., Wednesday, December 25, 2019. The town is bustling with holiday tourists, and activities continue through the New Year. (Photo by Chris Dillmann/Vail Daily via AP Photo) 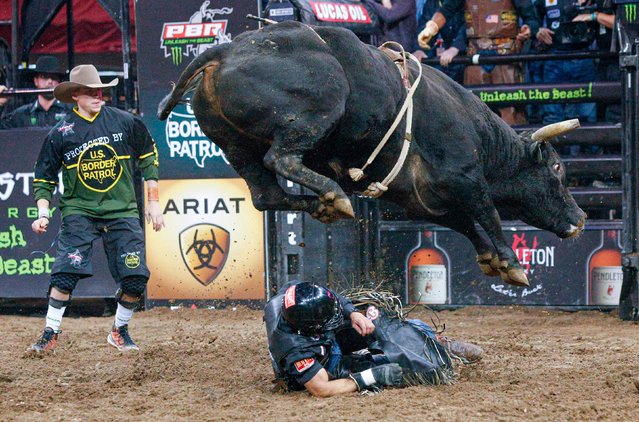 Rubens Barbosa falls as he competes during the PBR Unleash the Beast Bull Riding competition at Madison Square Garden on January 03, 2020 in New York City. (Photo by Kena Betancur/AFP Photo) 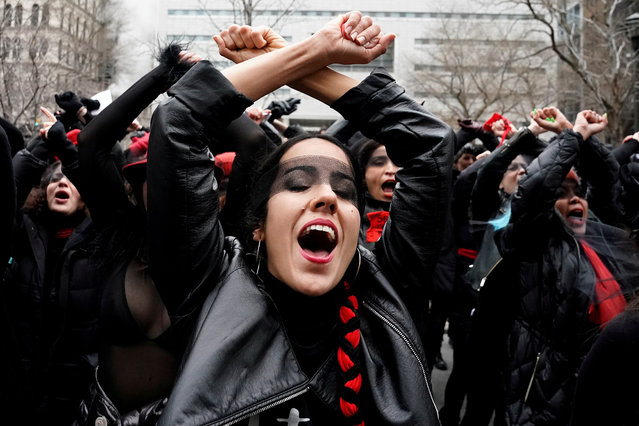 Women hold a protest across the street from the court where producer Harvey Weinstein's ongoing sexual assault trial is held in the Manhattan borough of New York City, New York, U.S., January 10, 2020. (Photo by Carlo Allegri/Reuters) 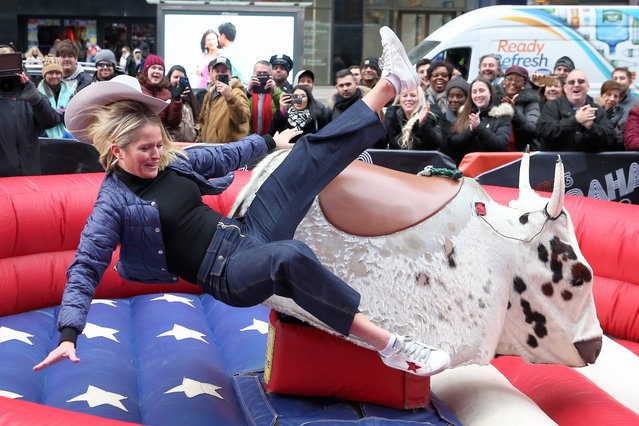