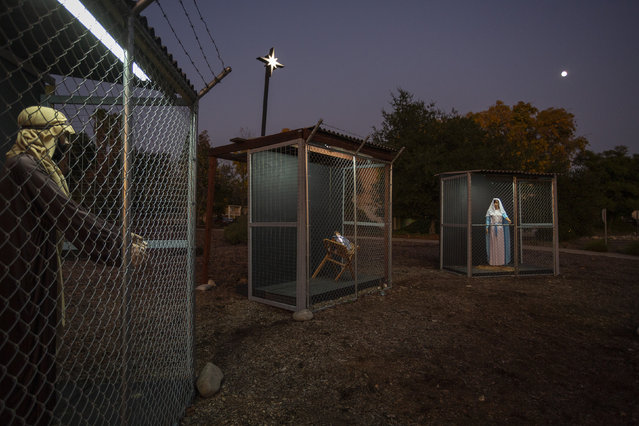 A Christmas nativity scene depicts Jesus, Mary, and Joseph separated and caged, as asylum seekers detained by U.S. Immigration and Customs Enforcement, at Claremont United Methodist Church on December 9, 2019 in Claremont, California. The church hopes the display will prompt viewers to ask themselves what the family would face today if seeking refuge in the U.S. as they did when fleeing Nazareth to Egypt to escape capture by the forces of King Herod. The Claremont United Methodist Church has worked to assist asylum seekers at the U.S.-Mexico border. (Photo by David McNew/Getty Images) 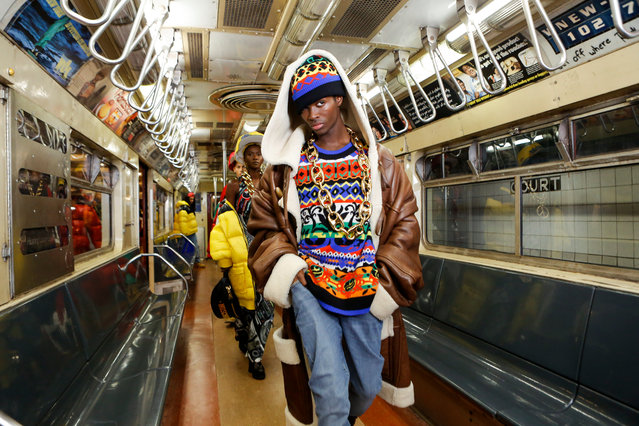 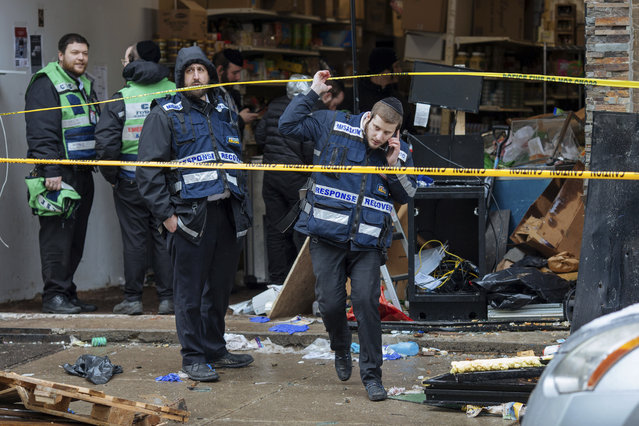 Responders work to clean up the scene of Tuesday's shooting that left multiple people dead at a kosher market on Wednesday December 11, 2019, in Jersey City, N.J. (Photo by Kevin Hagen/AP Photo) 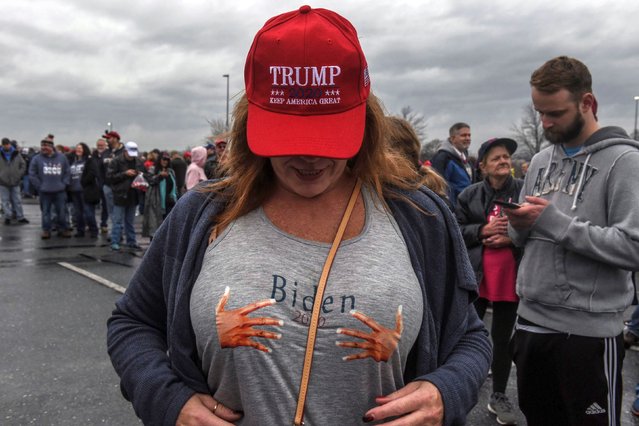 A supporter of U.S. President Donald Trump wears a t-shirt depicting a pair of groping hands with “Biden 2020” displayed before a Trump rally in Hershey, Pennsylvania, U.S. on December 10, 2019. (Photo by Stephanie Keith/Reuters) 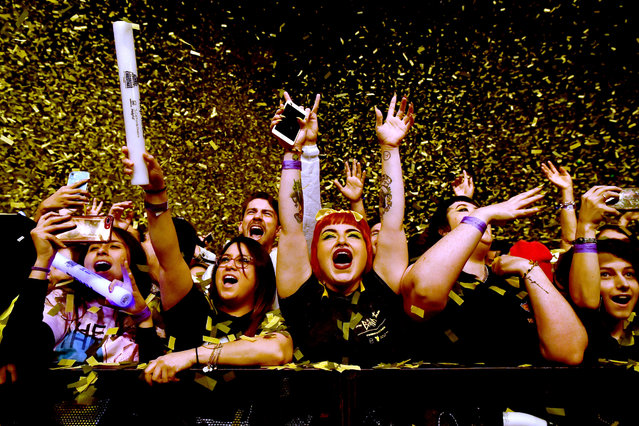 A general view of atmosphere during KROQ Absolut Almost Acoustic Christmas 2019 at Honda Center on December 8, 2019 in Anaheim, California. (Photo by Emma McIntyre/Getty Images for KROQ) 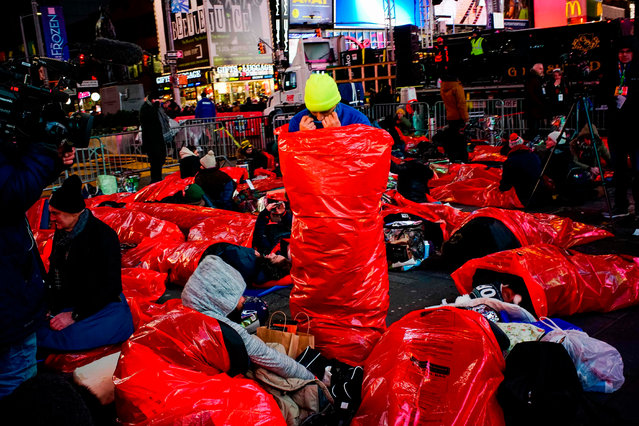 People get ready to sleep outside while taking part in The World’s Big Sleep Out event in Times Square on December 7, 2019 in New York. (Photo by AFP Photo/Stringer) 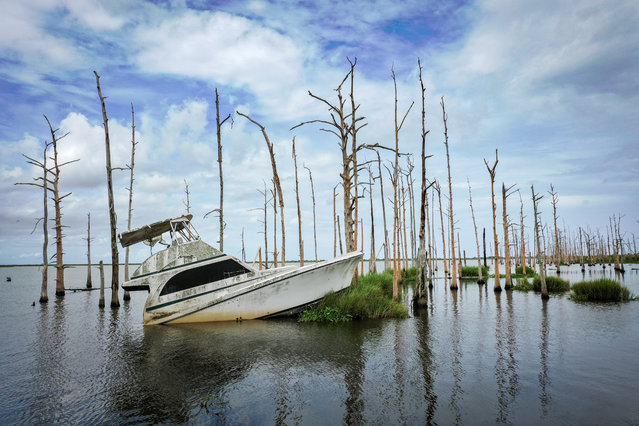 An abandoned boat sits in the water amid dead cypress trees in coastal waters and marsh August 26, 2019 in Venice, Louisiana. Many oak trees and cypress trees throughout Louisiana's coastal marshes have died due to a combination of the saltwater intrusion and subsidence. According to researchers at the National Oceanic and Atmospheric Administration (NOAA), Louisiana's combination of rising waters and sinking land give it one of the highest rates of relative sea level rise on the planet. Since the 1930s, Louisiana has lost over 2,000 square miles of land and wetlands, an area roughly the size of Delaware. In the past 30 years, as subsidence continues and the effects of climate change increase, Louisiana has been losing its coastal landscape at the rate of almost a football fields worth of land every hour. (Photo by Drew Angerer/Getty Images) 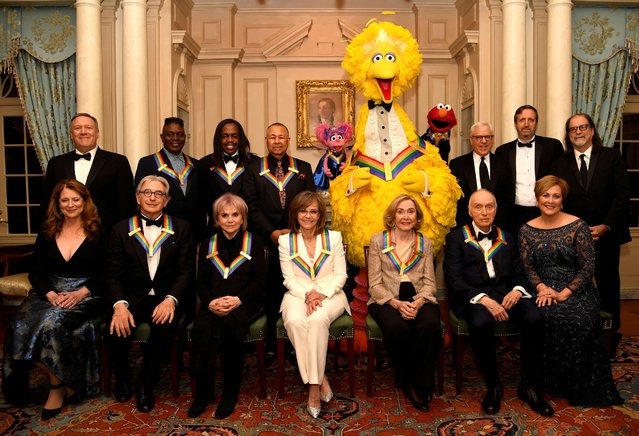 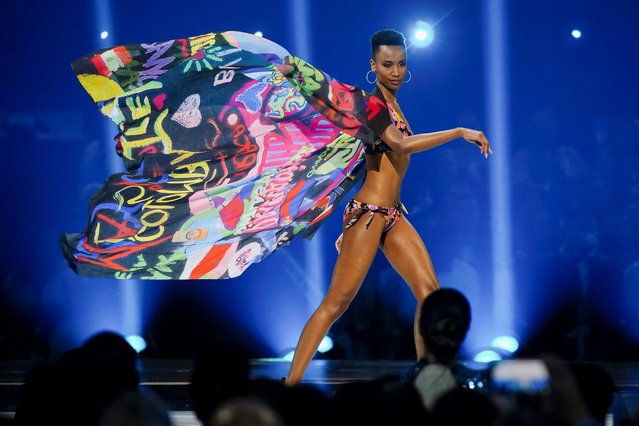 Zozibini Tunzi, of South Africa, who eventually won the competition, is seen during the swimwear portion of Miss Universe pageant at Tyler Perry Studios in Atlanta, Georgia, U.S. December 8, 2019. (Photo by Elijah Nouvelage/Reuters) 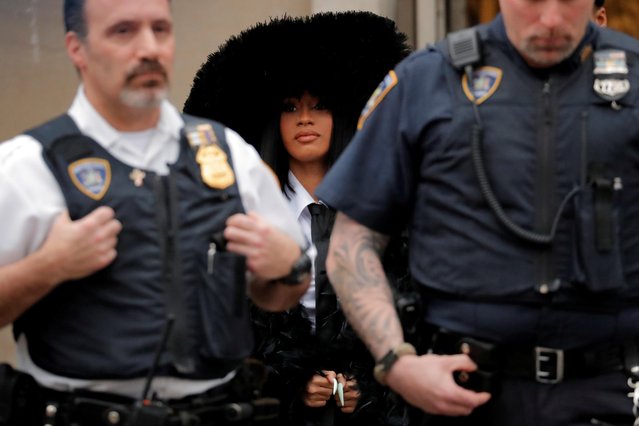 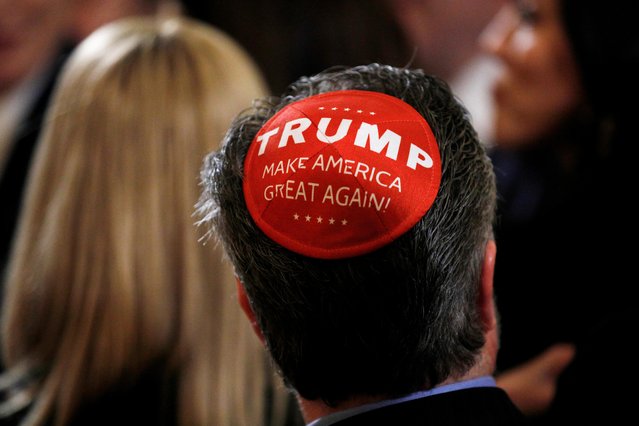 A participant wears a Trump “Make America Great Again” yarmulke as they attend a White House Hanukkah reception where U.S. President Donald Trump signed an executive order on anti-semitism in the East Room of the White House in Washington, U.S., December 11, 2019. (Photo by Tom Brenner/Reuters) 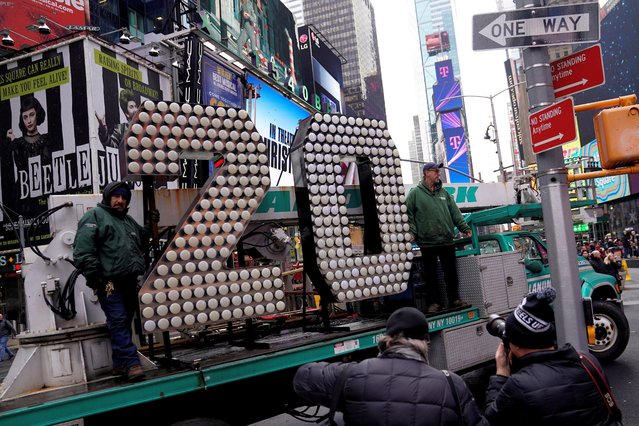 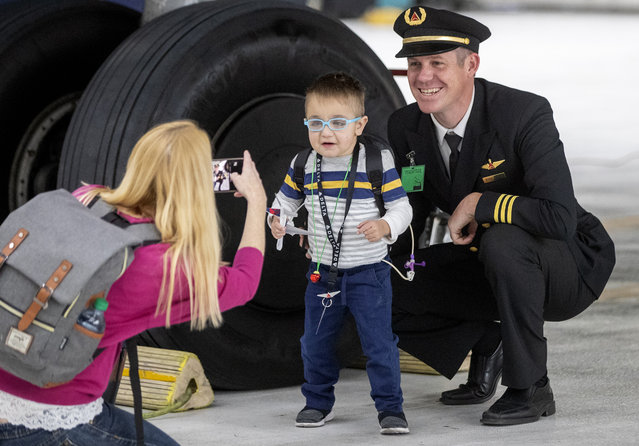 A boy gets his picture taken during the sixth annual Santa’s Winter Wonderland event, held by Delta Air Lines, at the Salt Lake City International Airport on Saturday, December 7, 2019. After taxiing on a decorated Boeing 737 to the Delta hangar, patients from Primary Children’s Hospital and Shriners Hospitals for Children-Salt Lake City, and their families, enjoyed games, presents and fun. (Photo by Scott G. Winterton/Deseret News) 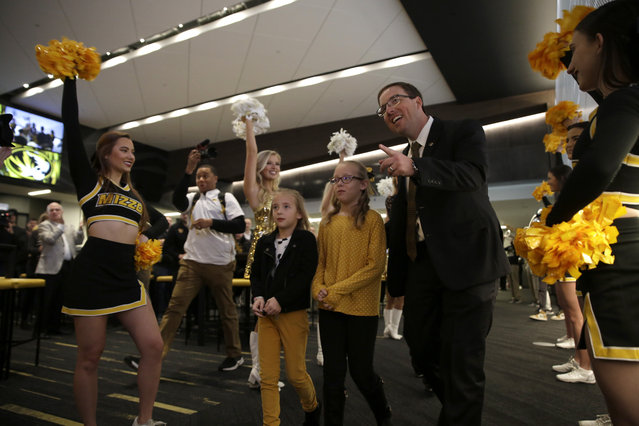 Eliah Drinkwitz walks to the stage to be introduced as the new NCAA college football head coach at the University of Missouri, with his children Emerson, 6, left, and Addison, 9, Tuesday, December 10, 2019, in Columbia, Mo. Drinkwitz becomes the 33rd head football coach at Missouri after coaching the 2019 season at Appalachian State. (Photo by Jeff Roberson/AP Photo) 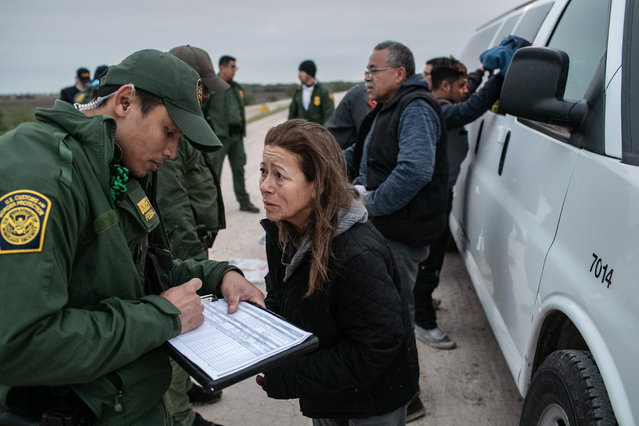 U.S. Border Patrol agents detain undocumented immigrants caught near a section of privately-built border wall under construction on December 11, 2019 near Mission, Texas. The hardline immigration group We Build The Wall is funding construction of the wall on private land along the Rio Grande, which forms the border with Mexico. The group, led by former Trump strategist Stephen Bannon claims to have raised tens of millions of dollars in a GoFundMe drive to build sections of wall along stretches of the southwest border with Mexico. (Photo by John Moore/Getty Images) 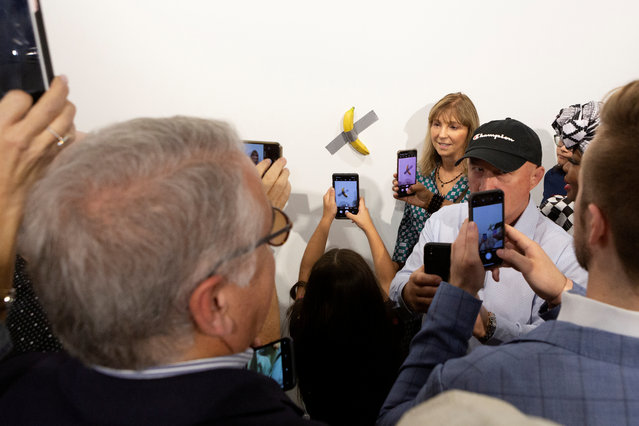 A woman poses for a photo next to a banana attached with duct-tape that replaces the artwork “Comedian” by the artist Maurizio Cattelan, which was eaten by David Datuna, in Miami Beach, Florida, December 7, 2019. (Photo by Eva Marie Uzcategui/Reuters) 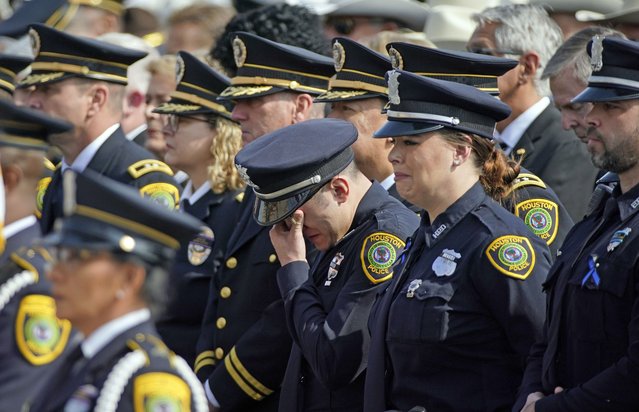 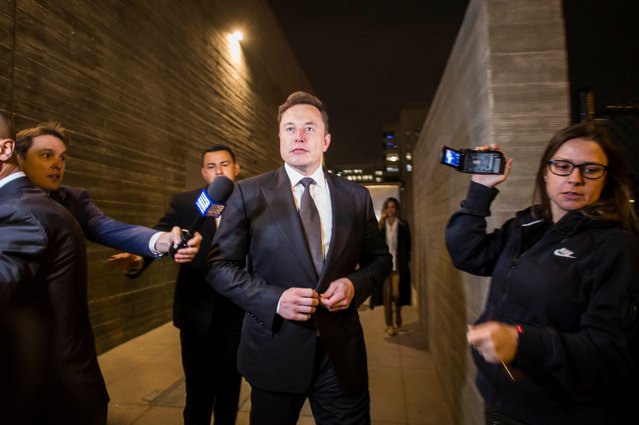 Elon Musk, chief executive officer of Tesla Inc. leaves the US District Court, Central District of California through a back door in Los Angeles, U.S. on December 3, 2019 in Los Angeles, California. The defamation lawsuit against Tesla CEO Elon Musk began in Los Angeles over calling British cave explorer Vernon Unsworth “Pedo Guy” and rapist. Unsworth was one of the first cave divers to reach the trapped boys in the flooded Tham Luong caves in Thailand. (Photo by Apu Gomes/Getty Images) 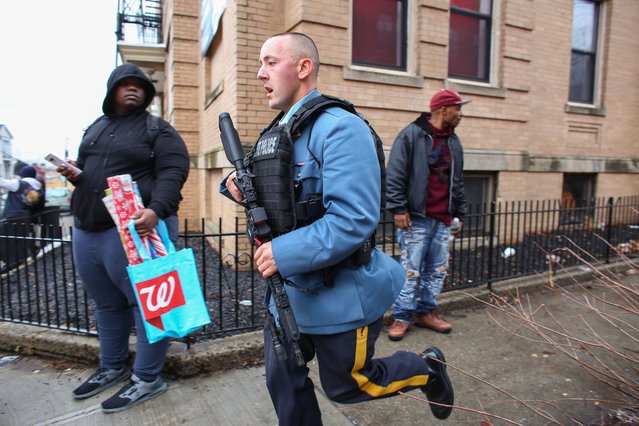 Police officers arrive at the scene of an active shooter in Jersey City, New Jersey, on December 10, 2019. One officer was shot when two gunmen with a long rifle opened fire in Jersey City, New Jersey, on the afternoon of December 10, 2019 , according to two officials. Two suspects were barricaded in a convenience store, the officials said. One officer was being taken to a nearby hospital. (Photo by Kena Betancur/AFP Photo) 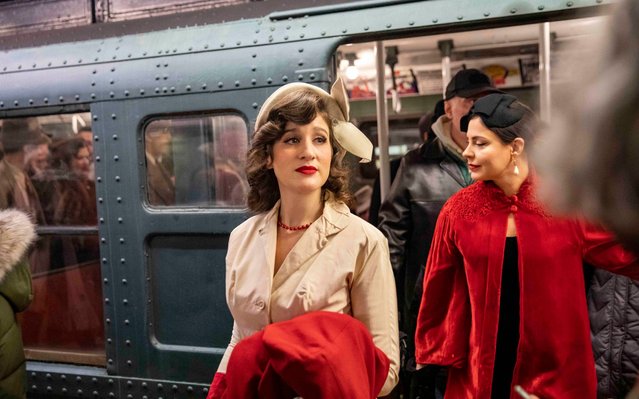 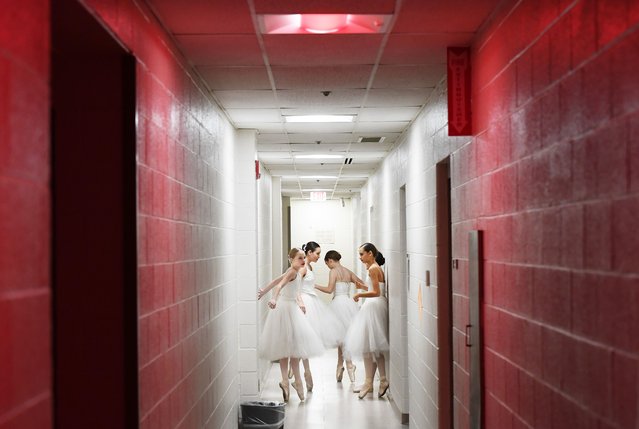 Performers gather in a hallway before taking the stage during a Metropolitan School of the Arts production of “The Nutcracker” at the Ernst Community Cultural Center in Annandale, Va. on December 8, 2019. (Photo by Matt McClain/The Washington Post) 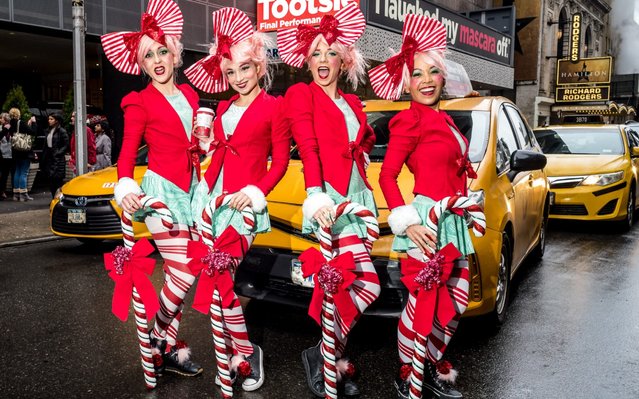 Revellers gather for the start of the Annual SantaCon Bar Crawl at Father Duffy Square, a section of Times Square, on December 14, 2019, in New York City. SantCon is an event where people make donations to charitable causes and dress up as a Christmas character and visit bars around the city. (Photo by Steven Ferdman/Getty Images)
Edit Del
16 Dec 2019 00:03:00, post received 0 comments
Publication archive:
←   →
Popular tags:
All tags
Last searches: