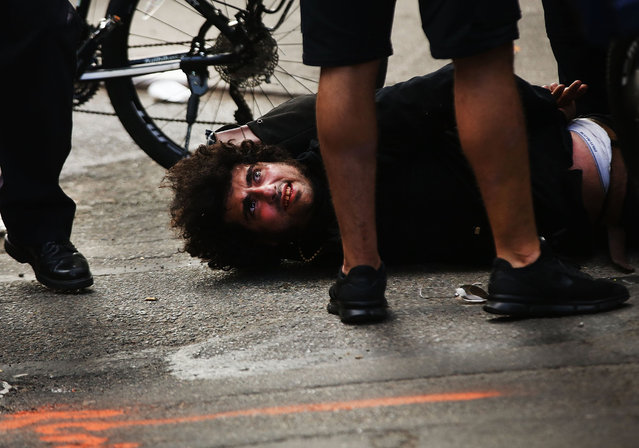 A protester is arrested as he marches with others from New York's Union Square on May Day on May 1, 2017 in New York, New York. Across the country and world people are protesting, marching and staying home from work on the traditional day of workers rights.This year's event has taken on extra significance due to the global surge in populist and right-wing movements. (Photo by Spencer Platt/Getty Images) 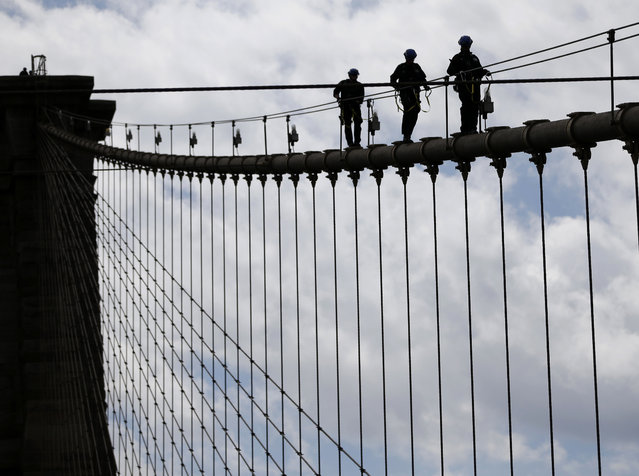 In this Tuesday, May 2, 2017 photo, New York City police officers, including members of the Emergency Services Unit, walk down a cable on the Brooklyn Bridge during a training exercise in New York. The 400-team unit, an elite group of officers trained to handle the city’s most dangerous rescues, trains for months not only on technical rescue techniques, but also on how to talk to people to get them down safely. (Photo by Seth Wenig/AP Photo) 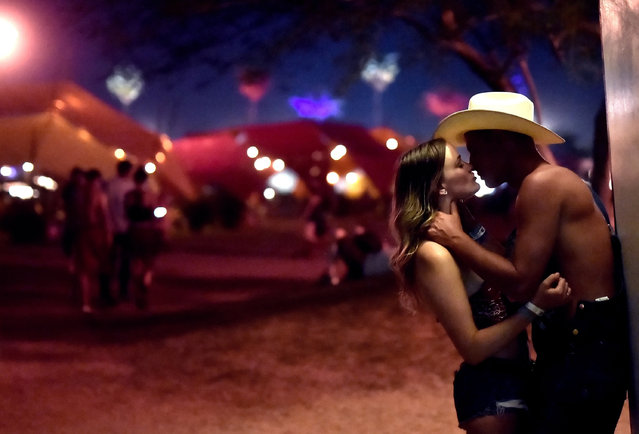 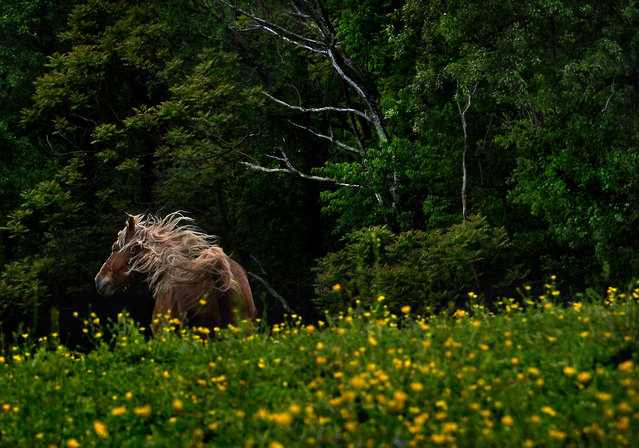 A horse, with its mane and tail whipping in the wind seemed to enjoy the warm weather nonetheless. Windy conditions that swept the area over the weekend continued today although a bit less than yesterday. This horse that was enduring the tail wind was in a field just off the Old National Pike near Middletown, Maryland. (Photo by Michael S. Williamson/The Washington Post) 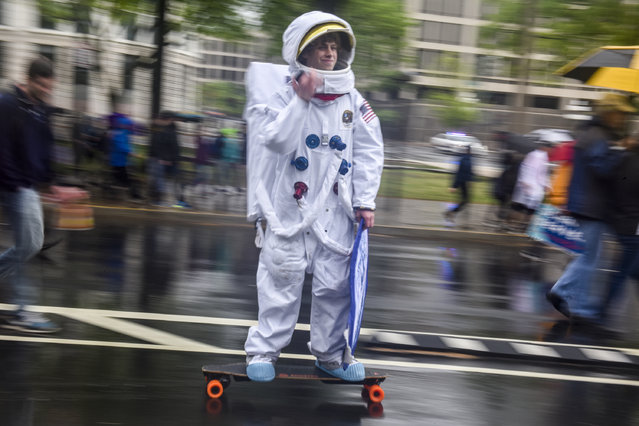 Max Gold, 20, of NYC, cruises on his skateboard as thousands gather on the National Mall for the March for Science on Saturday, April 22, 2017, in Washington, DC. Activists and scientists descend on the nation's capital to rally for environmental causes and government policies rooted in scientific research as part of the Earth Day and March for Science rallies. (Photo by Jahi Chikwendiu/The Washington Post) 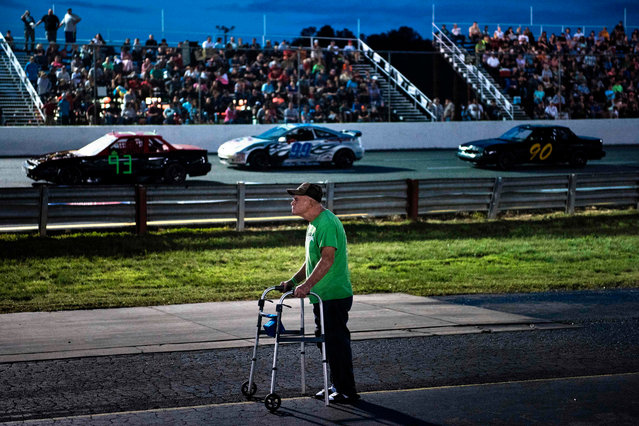 A man watches the race at Ace Speedway in Alamance County on May 19, 2017 in Altamahaw, North Carolina. (Photo by Brendan Smialowski/AFP Photo) 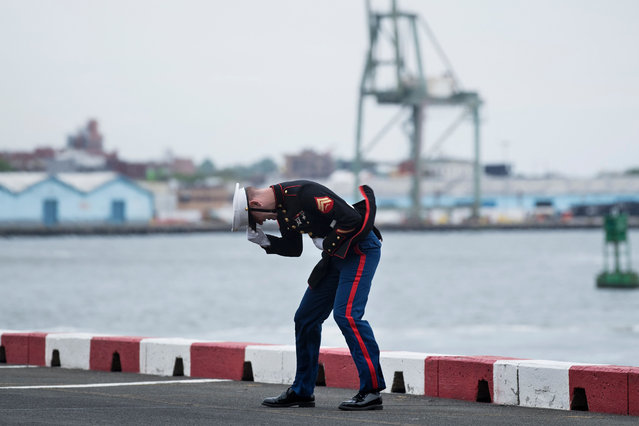 A Marine ducks into Marine One's rotor wash at the Wall Street heliport May 4, 2017 in New York during the arrival of US President Donald Trump. Trump returned to New York for the first time since January 19, 2017 and will meet with Australian Prime Minister Malcolm Turnbull aboard the Intrepid. (Photo by Brendan Smialowski/AFP Photo) 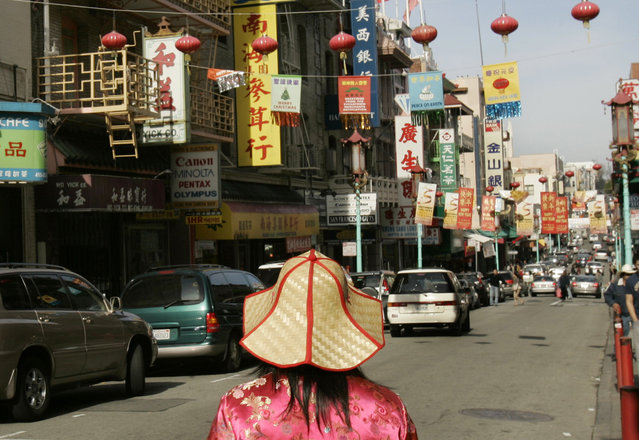 A woman looks at Chinese New Year banners hanging along a street in the Chinatown neighborhood of San Francisco, California February 5, 2007. (Photo by Robert Galbraith/Reuters) 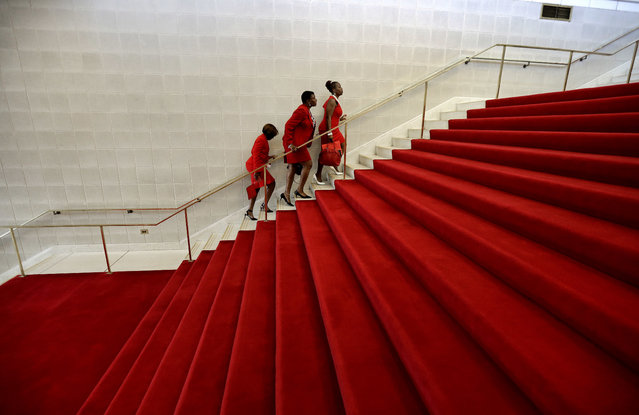 Members of Delta Sigma Theta Sorority, Inc. climb the red-carpeted stairs at the North Carolina General Assembly in Raleigh, N.C., Wednesday, May 3, 2017. The Sorority visits the legislature annually to voice their concerns to lawmakers. In 1913, the founders of Delta Sigma Theta performed their first public act by participating in the Women's Suffrage March in Washington, D.C. (Photo by Gerry Broome/AP Photo) 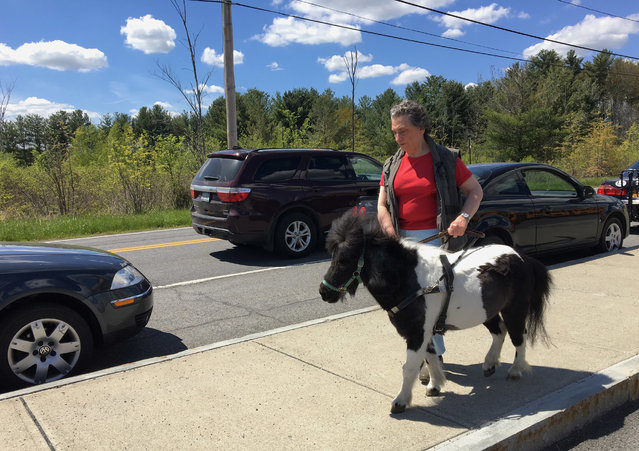 In this Friday, May 12, 2017, photo, Ann Edie, who has been blind since birth, walks with her miniature guide horse Panda on a street near her home in suburban Albany, N.Y. Retired teacher Edie and her husband drained more than $30,000 from their retirement nest egg to get Panda a life-saving operation after she suffered a serious intestinal blockage. Horse lovers who follow a blog about Panda’s training have also kicked in more than $11,000 to help defray costs. (Photo by Mary Esch/AP Photo) 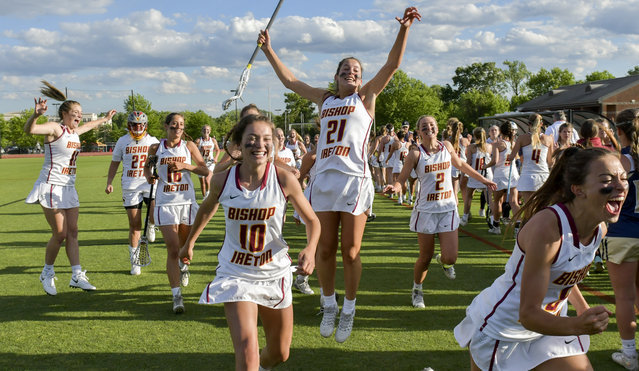 Bishop Ireton's Madison Mote (21) leaps for joy as she and her teammates celebrate a 12-4 decision over Good Counsel in the finals of the WCAC girls' lacrosse championship held Monday evening in College Park, MD on May 8, 2017. (Photo by Doug Kapustin/The Washington Post) 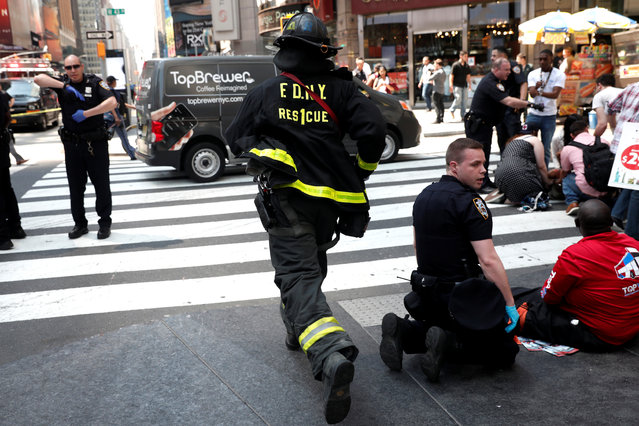 A New York City Fire Department (FDNY) emergency worker rushes to a scene in Times Square after a speeding vehicle struck pedestrians on the sidewalk in New York City, May 18, 2017. (Photo by Mike Segar/Reuters) 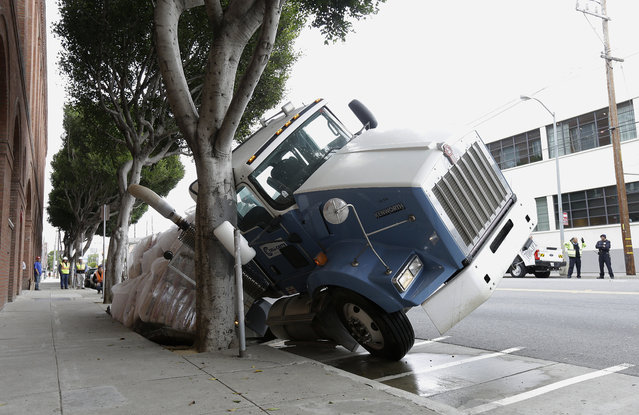 A big rig truck is stuck in a sinkhole in San Francisco, Friday, May 5, 2017. A truck driver escaped unharmed early Friday after a massive sinkhole started swallowing his big rig on a San Francisco street. (Photo by Jeff Chiu/AP Photo) 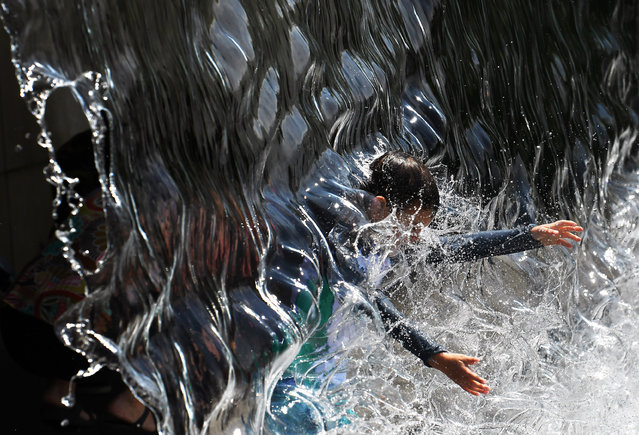 Conan Jones, 5, jumps through a waterfall feature at the Yards Park on Thursday May 18, 2017 in Washington, DC. Temperatures Thursday were expected to reach near 90 degrees. (Photo by Matt McClain/The Washington Post) 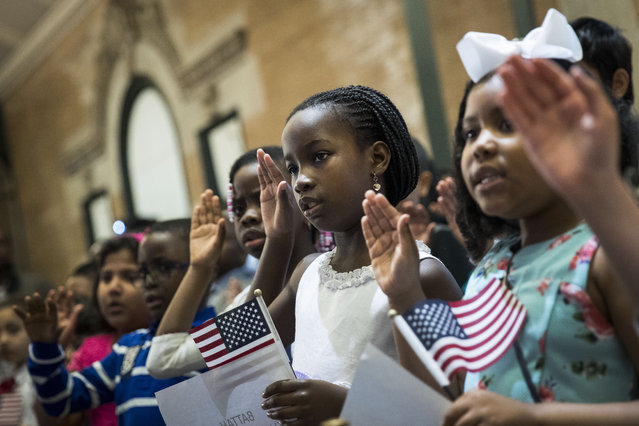 Children take the Oath of Allegiance as they become U.S. citizens during a citizenship ceremony at The Bronx Zoo, May 5, 2017 in The Bronx borough of New York City. 32 children, ranging in age from 5 to 13 years old, attended the ceremony and became U.S. citizens. (Photo by Drew Angerer/Getty Images) 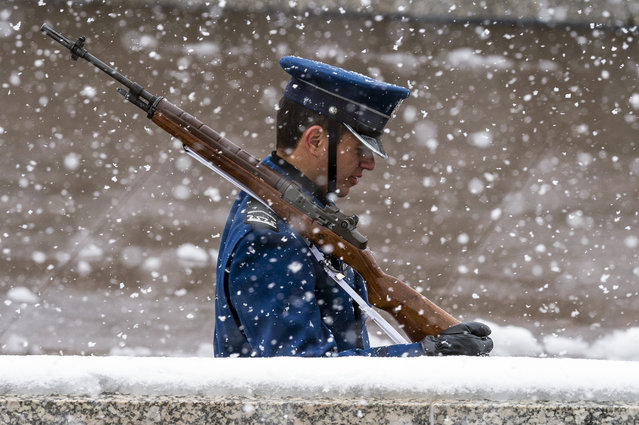 A member of the Cadet rifle team leaves after a volley of shots following the memorial service at Cadet Protestant Chapel at the U.S. Air Force Academy in Colorado Springs, Colo., Thursday, May 18, 2017. First Class (senior) Kaleb Estes died May 7 in a commercial skydiving accident near Ellicott, Colorado. (Photo by Dougal Brownlie/The Gazette via AP Photo) 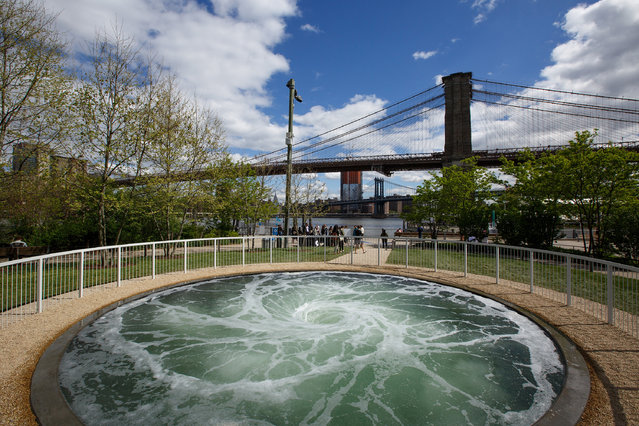 A view of artist Anish Kapoor's installation, titled “Descension”, in Brooklyn Bridge Park, May 3, 2017 in New York City. The installation will be on view through September 10. (Photo by Drew Angerer/Getty Images) 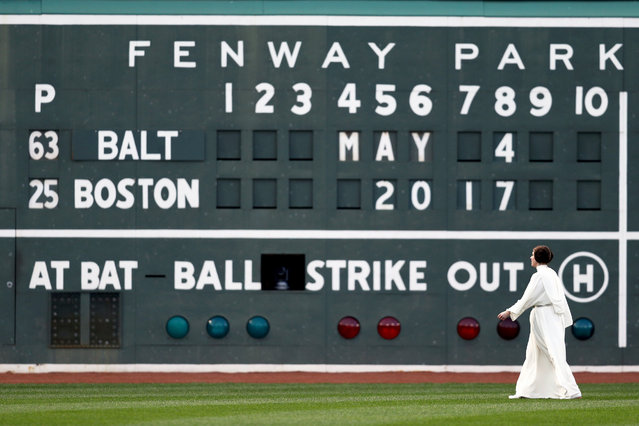 A woman dressed as Princess Leia from the Star Wars franchise walks in front of the Green Monster as part of Star Wars day at Fenway Park before the game between the Boston Red Sox and the Baltimore Orioles on May 4, 2017 in Boston, Massachusetts. (Photo by Maddie Meyer/Getty Images) 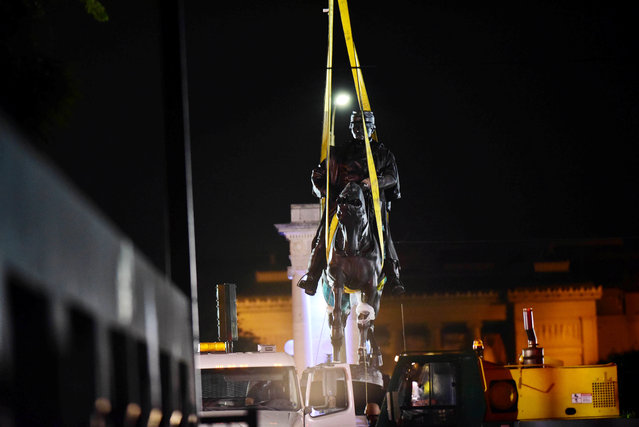 A construction crew works to remove a monument of Confederate General P.G.T. Beauregard at the entrance to City Park in New Orleans, Louisiana, U.S. May 17, 2017. (Photo by Cheryl Gerber/Reuters) 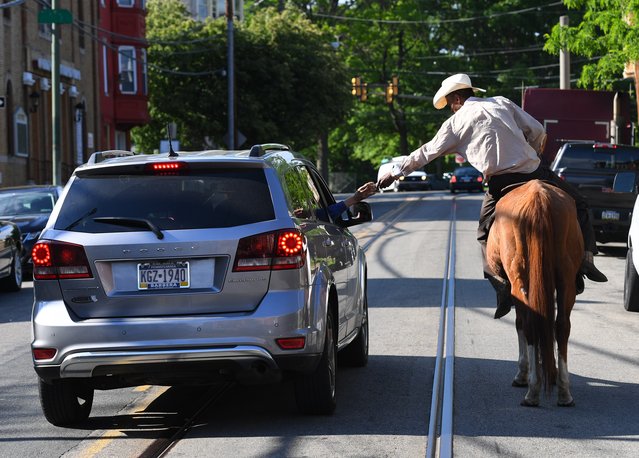 Philadelphia horseman John Morris goes for a evening ride in the streets of Philadelphia on May 16, 2017. A century-long tradition of black urban cowboys and horsemanship in Philadelphia is being used as a way to keep kids out of trouble by teaching them riding and caring for horses. (Photo by Timothy A. Clary/AFP Photo) 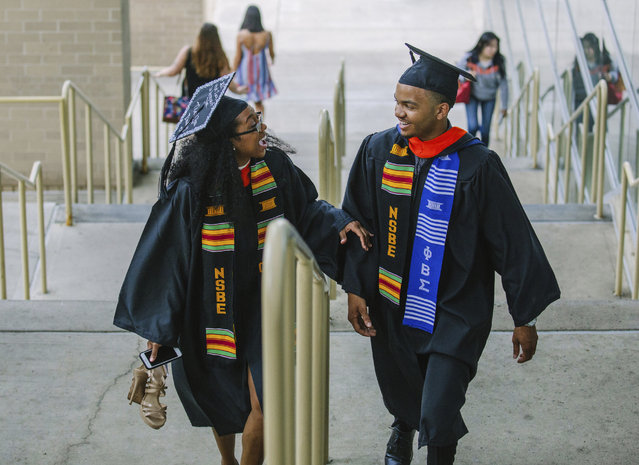 Rachel Strother and Richard Williams, both engineering graduates, walk outside the the Peterson Events Center before the University of Pittsburgh graduation ceremony in Oakland, Pa., Sunday, April 30, 2017. (Photo by Andrew Rush/Pittsburgh Post-Gazette via AP Photo) 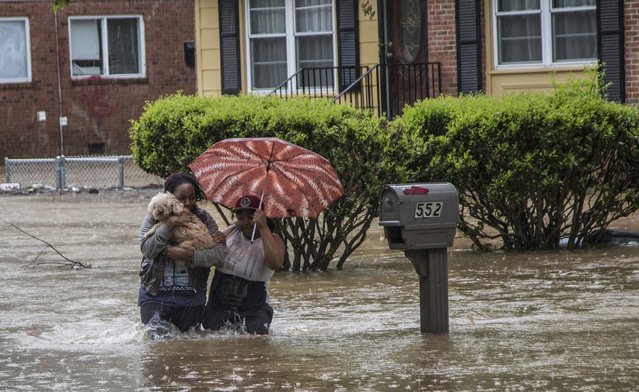 Nautica Jackson, left, and Aniya Ruffin walk through floodwaters with their dog as water threatened to enter their home in Raleigh, N.C. Tuesday, April 25, 2017. The National Weather Service had flood watches and warnings in effect in the eastern half of the state Tuesday morning after storms dumped several inches of rain in the Raleigh area. (Photo by Travis Long/The News & Observer via AP Photo) 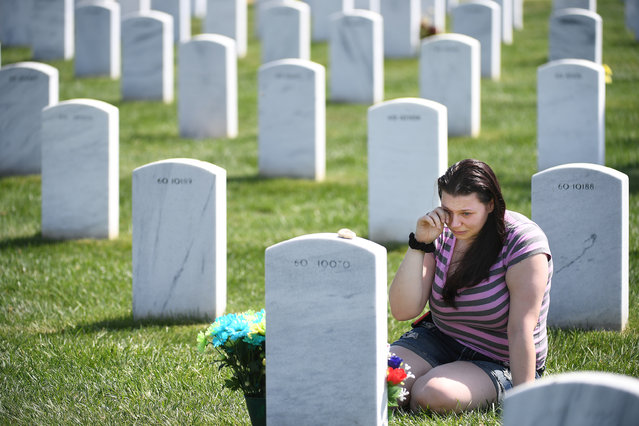 Krista Barham of Hyattsville, MD cries as she visits the grave of her friend, Eugene C. Mills III at Arlington National Cemetery on Easter Sunday April 16, 2017 in Arlington, VA. Mills died while serving with the United States Marine Corps. in Afghanistan in 2012. (Photo by Matt McClain/The Washington Post) 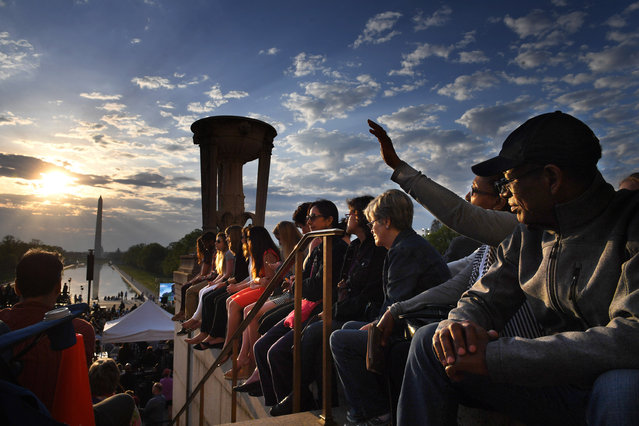 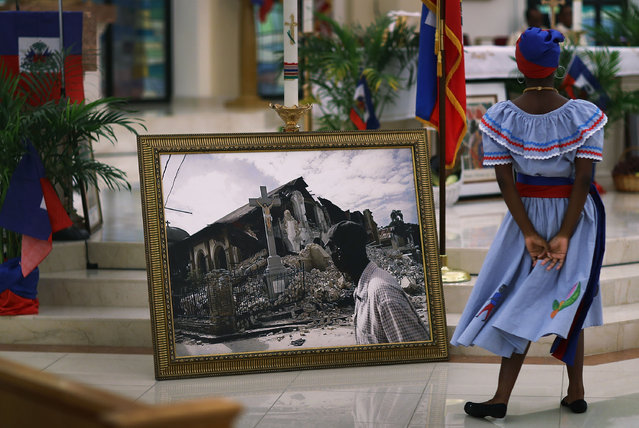 A dancer takes part in a dance near a framed picture of a church that was destroyed by the massive 2010 Earthquake in Haiti during a service at the Notre Dame D'Haiti Catholic Church as they celebrate Haitian Flag day in the Little Haiti neighborhood on May 18, 2017 in Miami, Florida. The prayer service also touched on the church's concern about the outcome of the decision on extending the Temporary Protected Status for Haitians living in the United States because it would possibly mean friends and families would be sent back to Haiti. 50,000 Haitians have been eligible for TPS and now the Trump Administration has until May 23 to make a decision on extending TPS for Haitians or allowing it to expire on July 22. (Photo by Joe Raedle/Getty Images)
Edit Del
22 May 2017 07:38:00, post received 0 comments
Publication archive:
←   →
Popular tags:
All tags
Last searches: