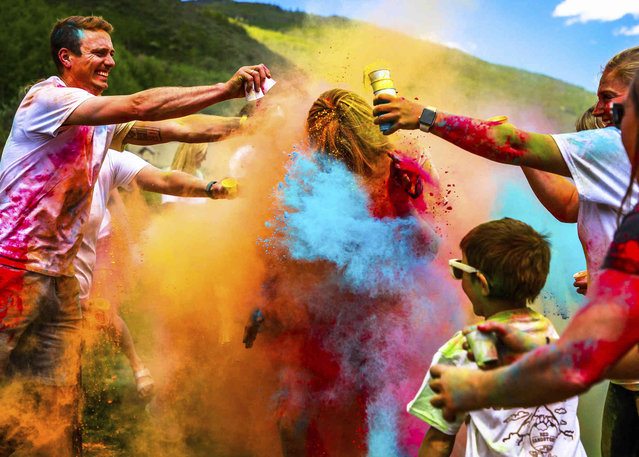 Red Sandstone Elementary School Principal Marcie Laidman gets coated in color during the first annual Color Run on the last day of school Wednesday, June 12, in Vail, Colo. The students held a penny war, raising money all week. The most money raised allowed the students to douse their teachers. (Photo by Chris Dillmann/Vail Daily via AP Photo) 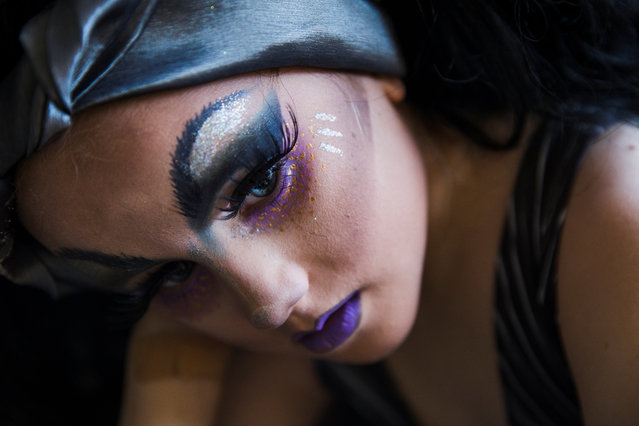 Keegan, 8, who identifies as gender creative, relaxes after a drag class at the home of his “Fairy Drag Mothers”, Robby and Alex, near Austin, Texas, U.S., August 14, 2018. Keegan's parents sought the help of the drag community to help mentor their son, who identifies as gender creative and recently came out as gay, to aid him with his drag skills. His mother, Megan, says the family was surprised that Keegan came as gay at the early age of 9, but happy he is relieved to have the weight lifted off his shoulders. (Photo by Amanda Voisard/Reuters) 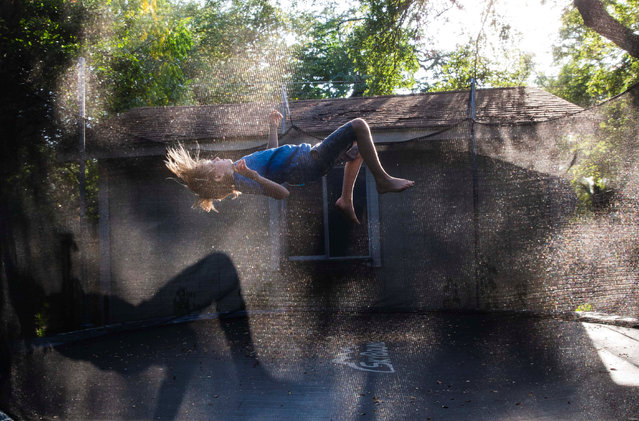 Keegan, 8, who identifies as gender creative, bounces on the trampoline outside his home near Austin, Texas, U.S., August 22, 2018. Identifying as gender creative, Keegan's parents have made the choice to raise their children to self-identify, while consciously not imposing gender norms on their day-to-day activities. (Photo by Amanda Voisard/Reuters) 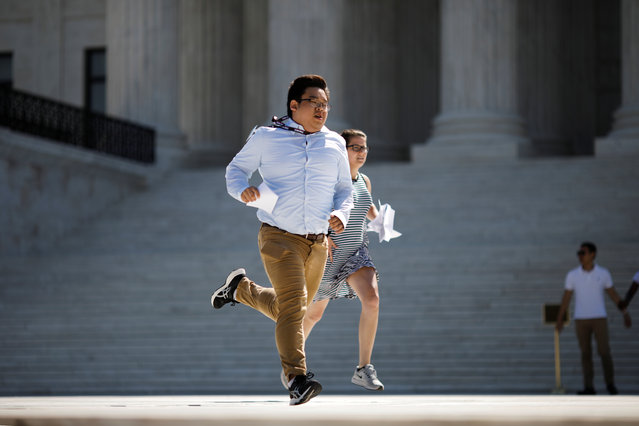 News assistants run outside the U.S. Supreme Court after the court rejected efforts to rein in the contentious practice of manipulating electoral district boundaries to entrench one party in power by turning away challenges to political maps in Maryland and North Carolina, in Washington, U.S., June 27, 2019. (Photo by Carlos Barria/Reuters) 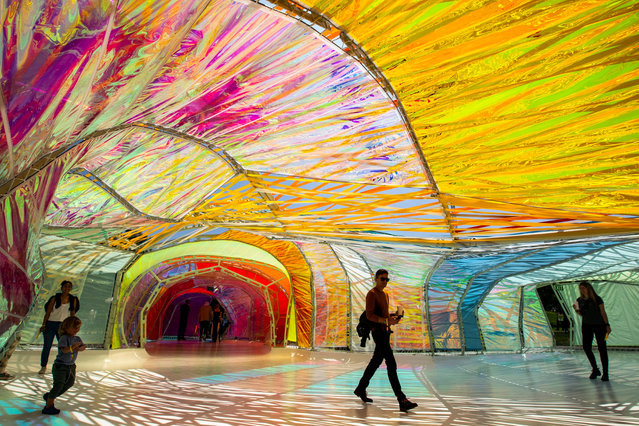 Visitors view the Second Home Serpentine Pavilion during the press preview of the installation at La Brea Tar Pits in Los Angeles, California, 27 June 2019. The installation will be be on show from 28 June to 24 November 2019. (Photo by Étienne Laurent/EPA/EFE) 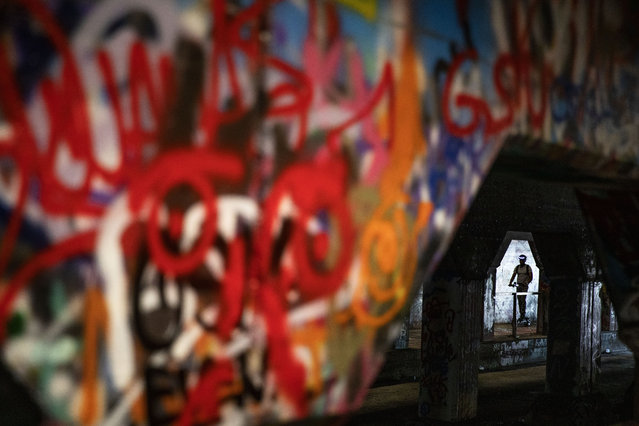 A person rides a scooter through the Krog Street Tunnel in Atlanta, Friday, June 28, 2019. The tunnel runs under train tracks carrying freight cars and is known for its urban street art. Connecting the eclectic neighborhoods of Cabbagetown and Inman Park, the tunnel also serves as a message board with frequently updated posts about local events and shows. (Photo by David Goldman/AP Photo) 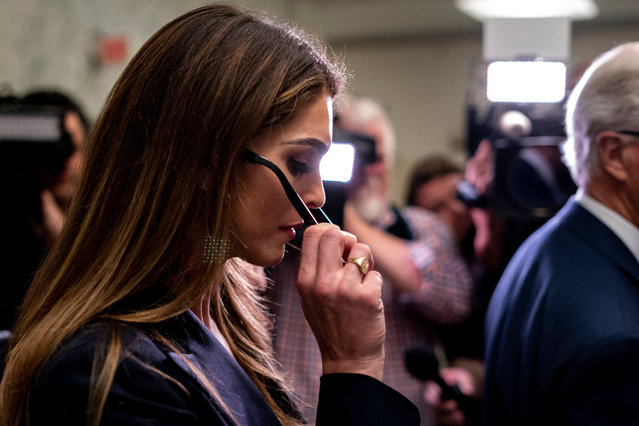 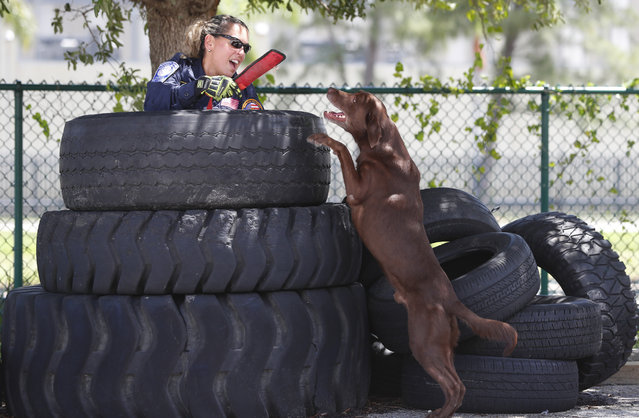 Miami-Dade emergency worker Maggie Castro is found by Zeus a chocolate Labrador while hiding in a stack of tires during an urban search and rescue demonstration on June 19, 2019, at the Miami-Dade Fire Rescue Training Facility in Miami. Specializing in urban search and rescue, the Miami-based, 210-personnel Florida Task Force 1 have responded to numerous disasters, including the Florida Panhandle after Hurricane Michael and in Haiti after the 2010 earthquake. The K-9 unit has a minimum of 12 certified search and rescue dogs with an extensive list of rescues. (Photo by Wilfredo Lee/AP Photo) 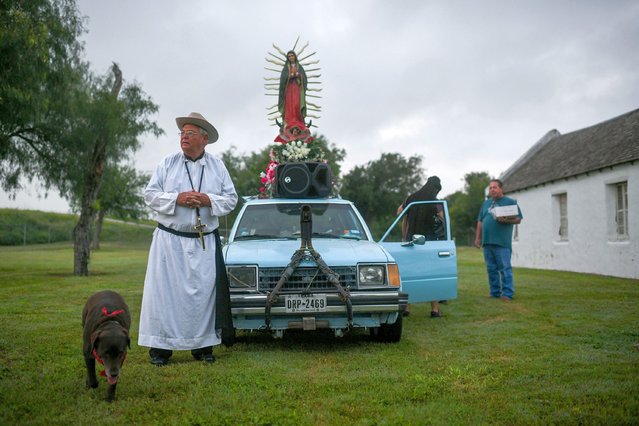 Father Roy Snipes arrives for a morning mass in honor of migrants who recently died during their journeys, including Salvadoran drowning victims Oscar Alberto Martinez Ramirez and his 23-month old daughter Valeria, at La Lomita chapel by the U.S.-Mexico border in Mission, Texas, U.S., June 28, 2019. (Photo by Loren Elliott/Reuters) 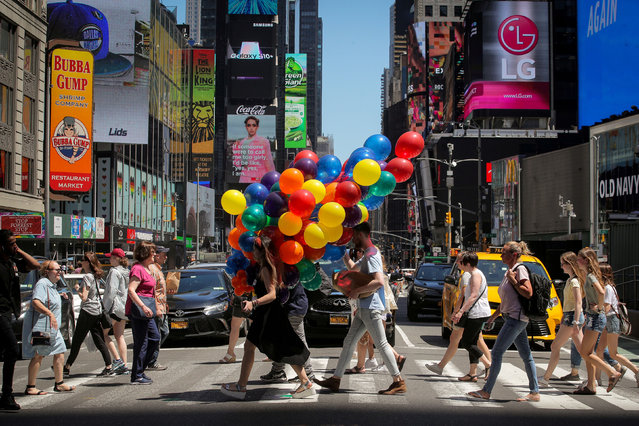 A woman carries a bunch of balloons through Times Square in New York, U.S., June 26, 2019. (Photo by Brendan McDermid/Reuters) 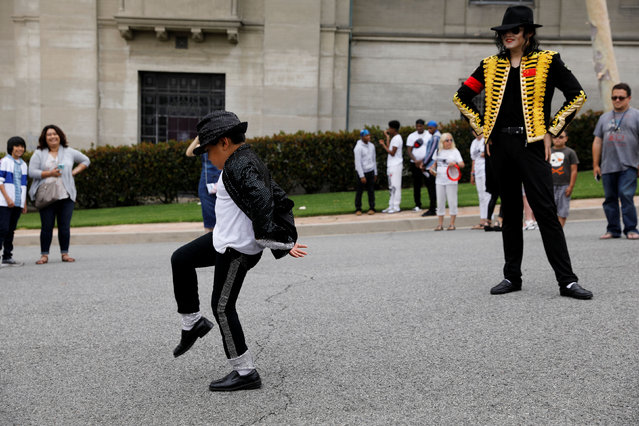 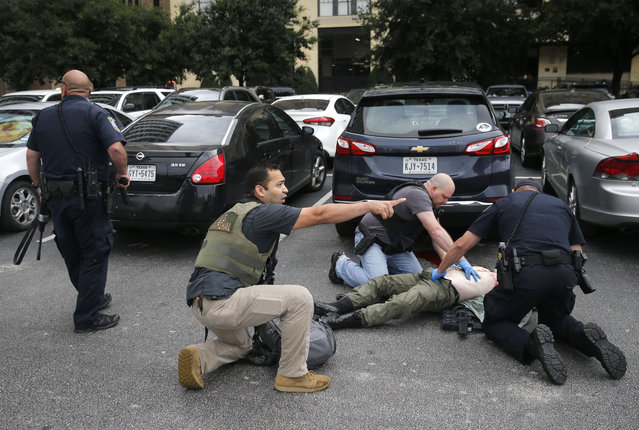 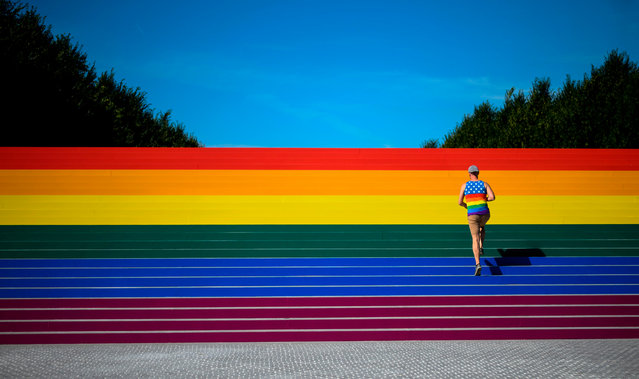 A man walks on steps covered in rainbow colors for Pride Month at Franklin D. Roosevelt Four Freedoms Park on June 15, 2019 in New York City. Organizers claim it is the largest LGBT pride flag in New York City and measures around 12 by 100 feet (3.6 x 30 meters). (Photo by Johannes Eisele/AFP Photo) 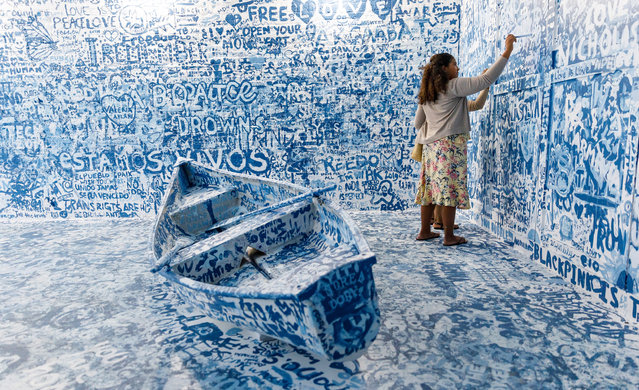 People visit the interactive installation “Add Color (Refugee Boat)” by artist Yoko Ono, made up of an empty room with a boat where visitors can paint messages and images on walls, in New York, New York, USA, 27 June 2019. The exhibit is part of the Lower Manhattan Cultural Council's annual River to River Festival which runs until 29 June 2019. (Photo by Justin Lane/EPA/EFE) 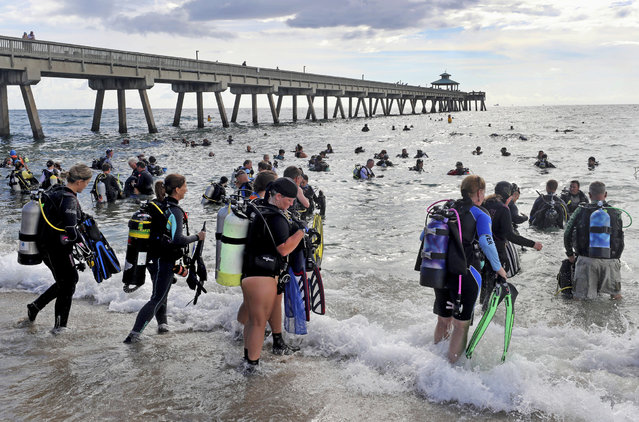 Divers enter the water in an attempt to break the world record for the largest underwater cleanup at the Deerfield Beach International Fishing Pier in Deerfield Beach, Fla., Saturday, June 15, 2019. The record was broken with 633 divers taking part in the record breaking dive. Guinness World Records adjudicator Michael Empric counted divers as they entered the water. (Photo by Mike Stocker/South Florida Sun-Sentinel via AP Photo) 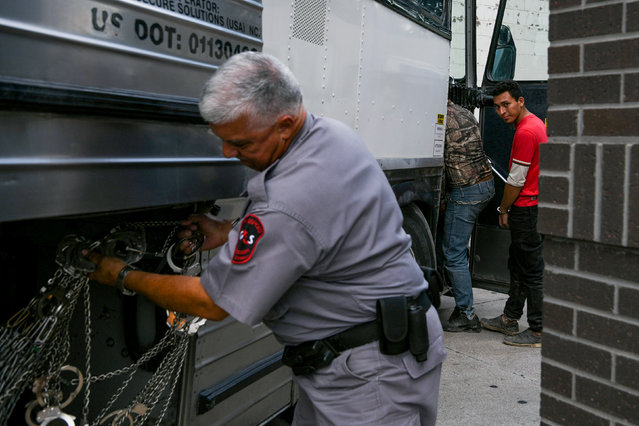 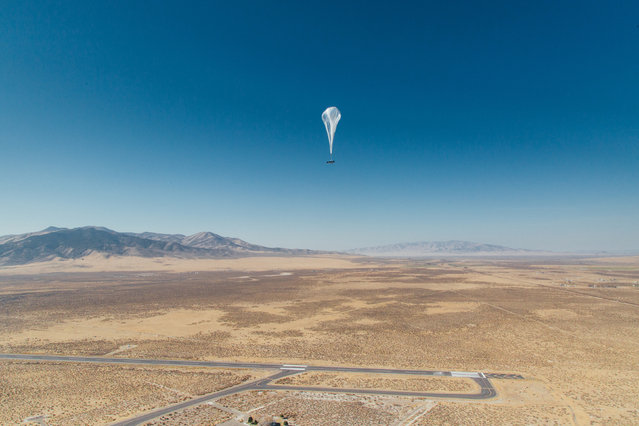 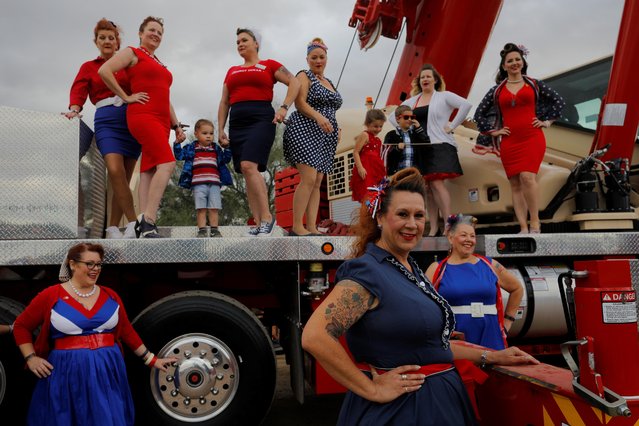 The Combat Dolls pose for a photograph on a crane at the Flags for Our Fallen rally to welcome the friends and family members of U.S. military veterans to the National Memorial Cemetery of Arizona on Memorial Day in the Maricopa County city of Phoenix, Arizona, U.S., May 27, 2019. (Photo by Brian Snyder/Reuters) 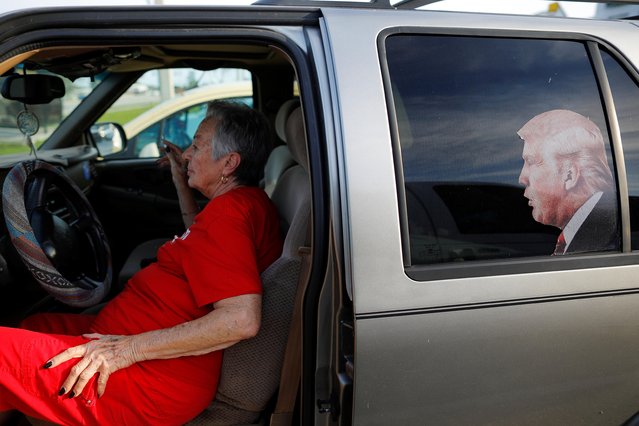 Dawn Simmons, a volunteer who organises Trump sign waving rallies, sits in her car with a picture of U.S. President Donald Trump on the rear window during a rally in the Pinellas County city of Clearwater, Florida, U.S., May 15, 2019. (Photo by Brian Snyder/Reuters) 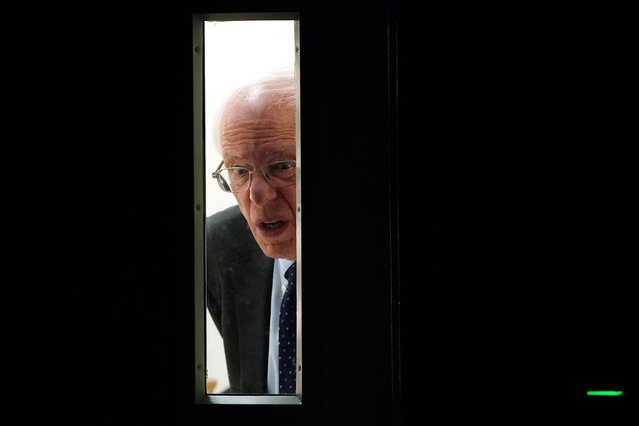 Democratic 2020 U.S. presidential candidate Senator Bernie Sanders peers out of a doorway before taking the stage at the Presidential Candidate Forum hosted by NALEO at Telemundo Center in Miami, Florida, U.S., June 21, 2019. (Photo by Carlo Allegri/Reuters) 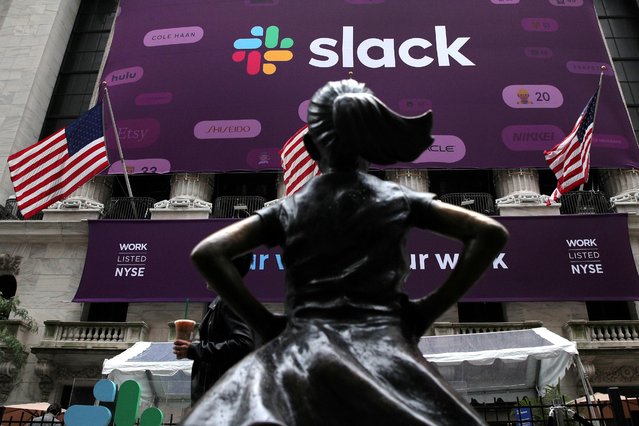 The Slack Technologies Inc. logo is seen behind the “Fearless Girl” statue outside the New York Stock Exchange (NYSE) during the company's direct listing in New York, U.S. June 20, 2019. (Photo by Brendan McDermid/Reuters) 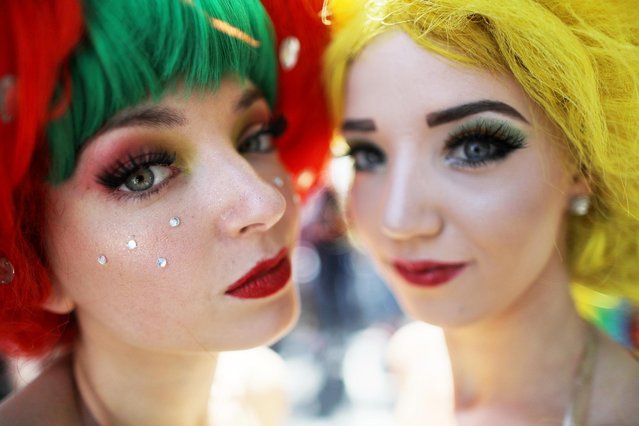