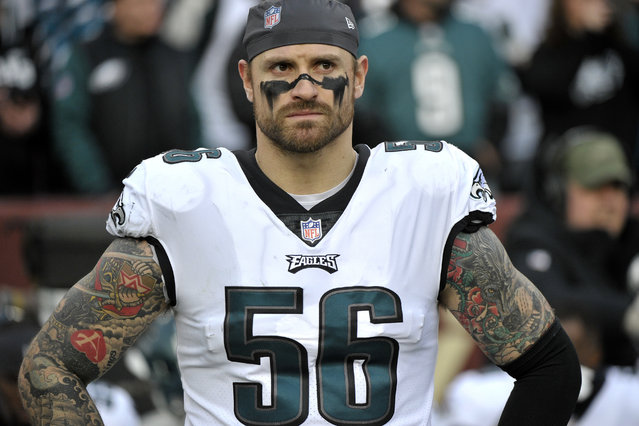 In this December 30, 2018, file photo, Philadelphia Eagles defensive end Chris Long stands on the sideline prior to the team's NFL football game against the Washington Redskins in Landover, Md. Long has announced his retirement from football, ending an 11-year NFL playing career that included winning two Super Bowl titles and the Walter Payton Man of the Year Award. Long posted his decision Saturday night, May 18, on Twitter, saying it has "been a hell of a journey" and adds that “I can honestly say I put my soul into every minute of it”. (Photo by Mark Tenally/AP Photo/File) 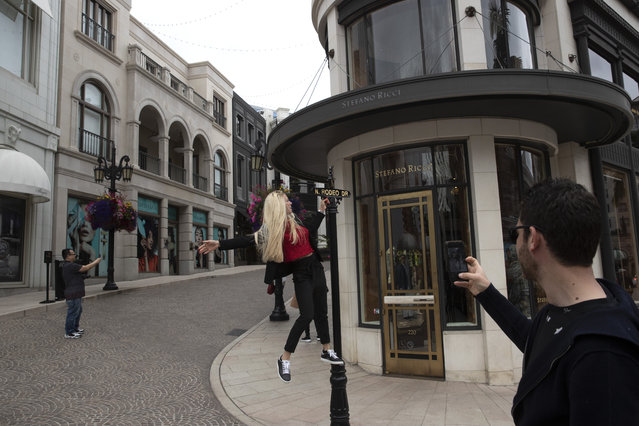 A woman climbs on a street sign to take pictures on Rodeo Drive in Beverly Hills, Calif., on Tuesday, May 7, 2019. (Photo by Jae C. Hong/AP Photo)

People re-created the historic photo of the meeting of the rails from May 10, 1869, during the commemoration of the 150th anniversary of the Transcontinental Railroad completion at the Golden Spike National Historical Park Friday, May 10, 2019, in Promontory, Utah. (Photo by Rick Bowmer/AP Photo) 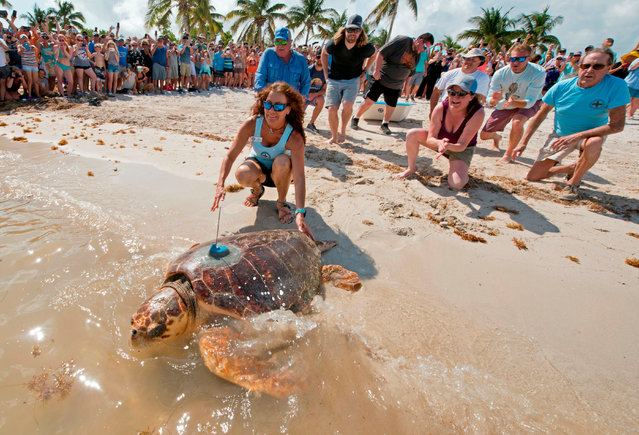 In this handout image provided by the Florida Keys News Bureau “Mr. T,” an almost 200-pound loggerhead sea turtle, crawls into the Atlantic Ocean, May 7, 2019, at Sombrero Beach in Marathon, Florida. Subsequently released at a Keys beach, the adult male reptile had been rescued in early February and convalesced at the hospital following surgeries to remove a fishhook. The turtle was fitted with a satellite tag by Mote Marine Laboratory to track migratory patterns of male loggerheads. (Photo by Andy Newman/Florida Keys News Bureau/AFP Photo) 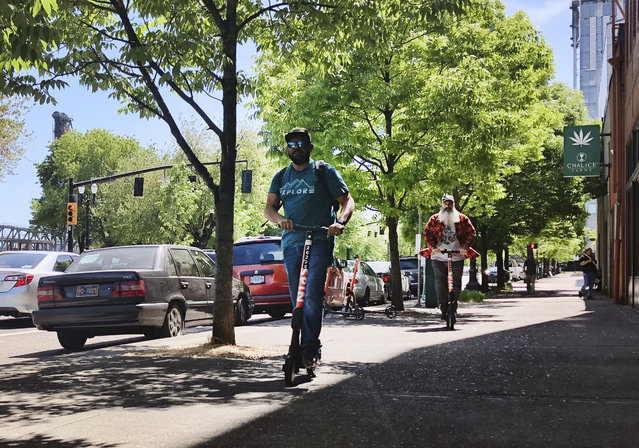 Motorists ride on electric scooters along a street in downtown Portland, Ore., Thursday, May 9, 2019. A disability rights nonprofit group in Oregon filed a letter of complaint Thursday with the city of Portland over new rules about an electric scooter pilot program. (Photo by Gillian Flaccus/AP Photo) 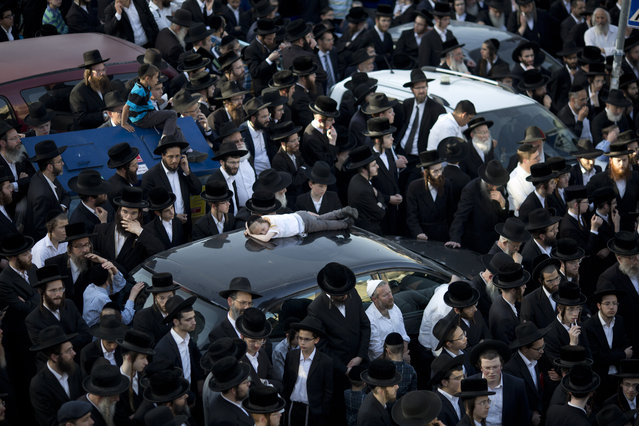 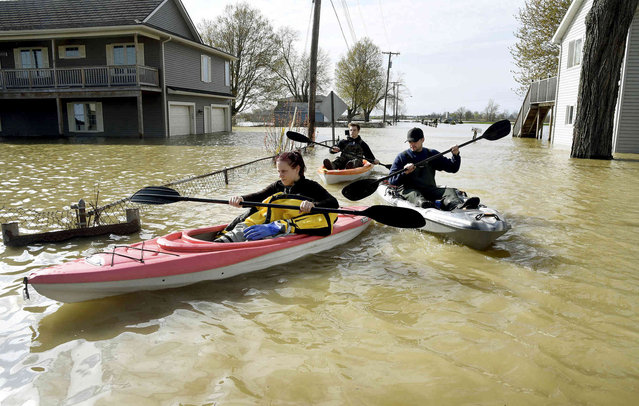 In this Wednesday, May 8, 2019 photo, Estral Beach Firefighters Courtney Millar, Eric Bruley, and Chase Baldwin kayak down Lakeshore Dr. in the south end of Estral Beach in Berlin Township, Mich., to see if anyone needs to be evacuated while also checking the floodwaters. Wind-driven water caused more flooding in southeastern Michigan along western Lake Erie following recent rainfall that contributed to high water levels in the Great Lakes. (Photo by Tom Hawley/The Monroe News via AP Photo) 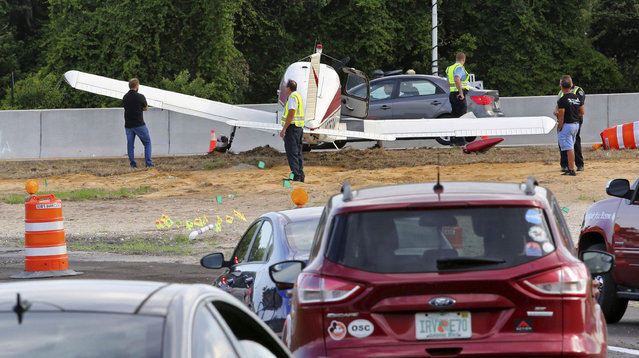 The driver, left, of a black Acura that was struck by a small plane making an emergency landing on the eastbound ramp of Maitland Blvd. to Interstate 4, surveys the damage to his car, Thursday, May 16, 2019, in Maitland, Fla. (Photo by Joe Burbank/Orlando Sentinel via AP Photo) 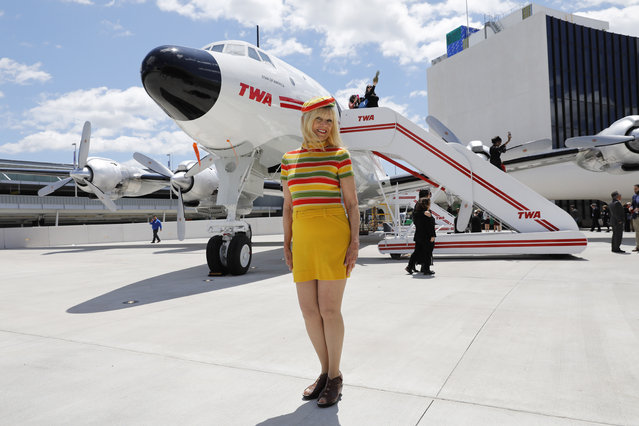 Susan Meekma Stevens, who was hired as a TWA stewardess in 1970, poses for photos in front of a Lockheed Constellation outside the newly opened TWA Hotel at New York's John F. Kennedy International Airport, Wednesday, May 15, 2019. (Photo by Mark Lennihan/AP Photo) 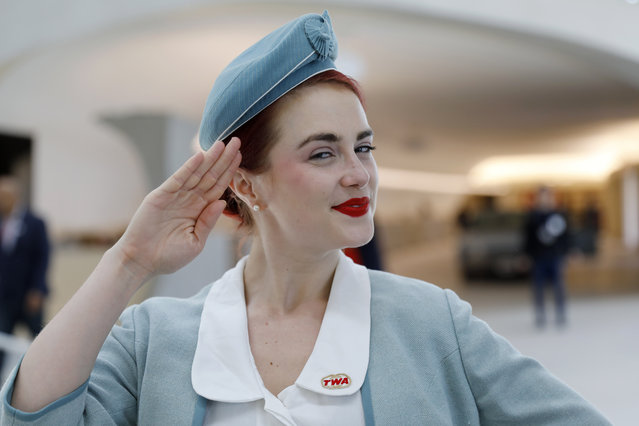 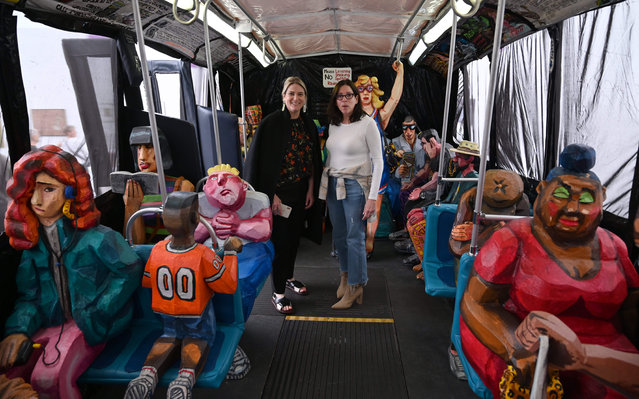 People look at the art of Red Grooms, “The Bus” (1995), during Frieze New York 2019 on May 2, 2019. The exhibit takes place in Randall's Island Park May 1-5, 2019. This year, the art fair introduces new collaborations with leading museums directors from institutions across the US. (Photo by Timothy A. Clary/AFP Photo) 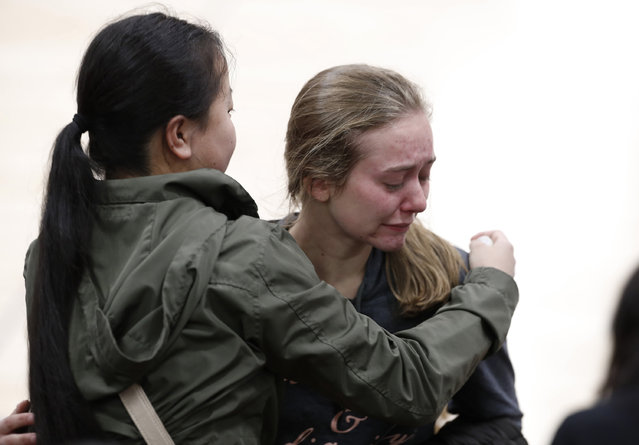 Young women console each other during a community vigil to honor the victims and survivors of yesterday's fatal shooting at the STEM School Highlands Ranch, Wednesday, May 8, 2019, in Highlands Ranch, Colo. (Photo by David Zalubowski/AP Photo) 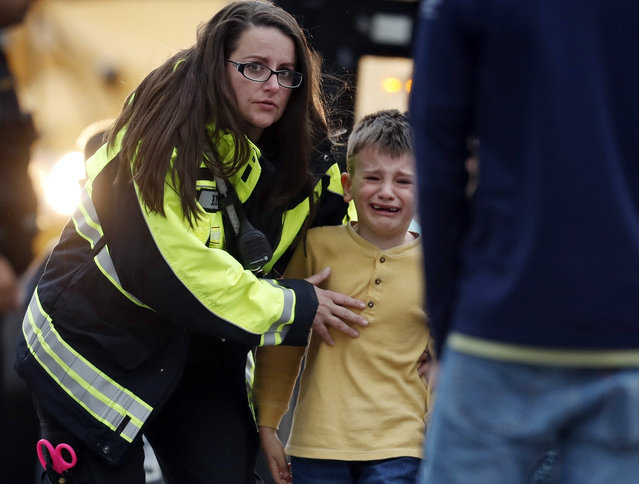 Officials guide students off a bus and into a recreation center where they were reunited with their parents after a shooting at a suburban Denver middle school Tuesday, May 7, 2019, in Highlands Ranch, Colo. (Photo by David Zalubowski/AP Photo) 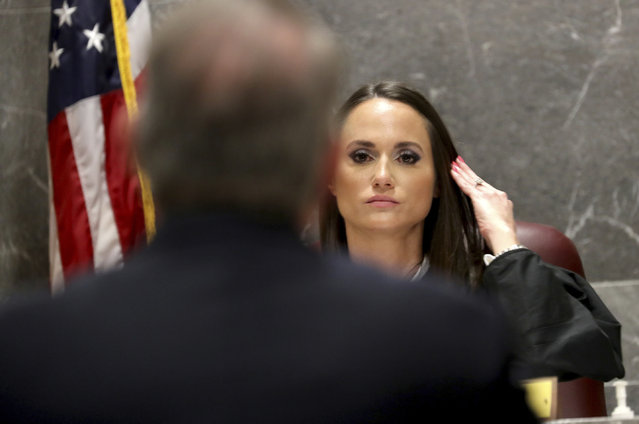 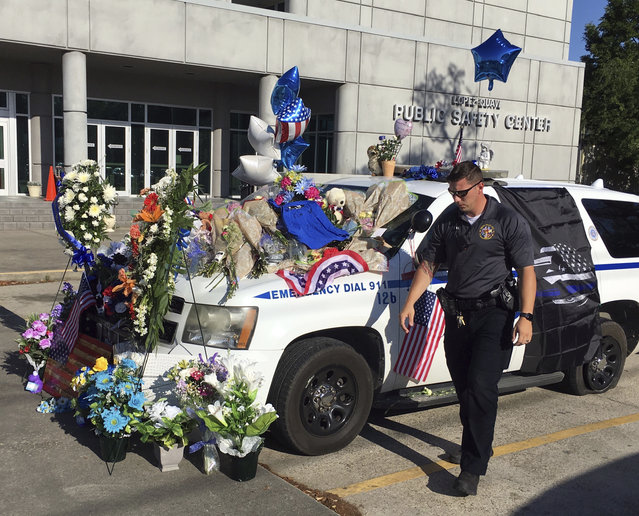 In this photo provided by WLOX, an unidentified Biloxi, Miss., police officer walks away after placing an angel statuette on Biloxi Police Officer Robert McKeithen's official vehicle, Monday, May, 6, 2019. McKeithen was shot in an ambush in front of the police station Sunday night. (Photo by John Fitzhugh/WLOX via AP Photo) 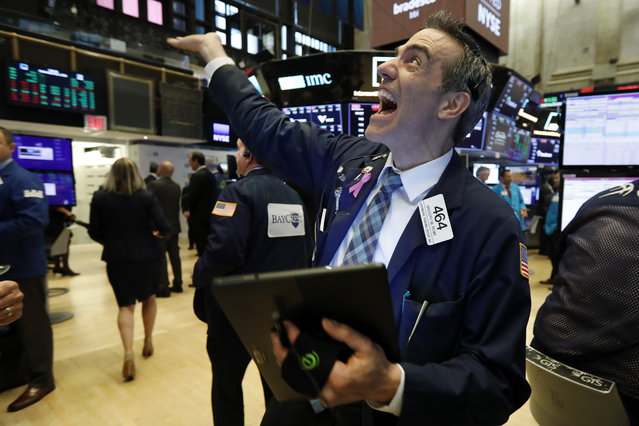 Trader Gregory Rowe laughs with fellow traders as he works on the floor of the New York Stock Exchange, Wednesday, May 1, 2019. Stocks are opening higher on Wall Street after several big U.S. companies reported earnings that were better than analysts were expecting. (Photo by Richard Drew/AP Photo) 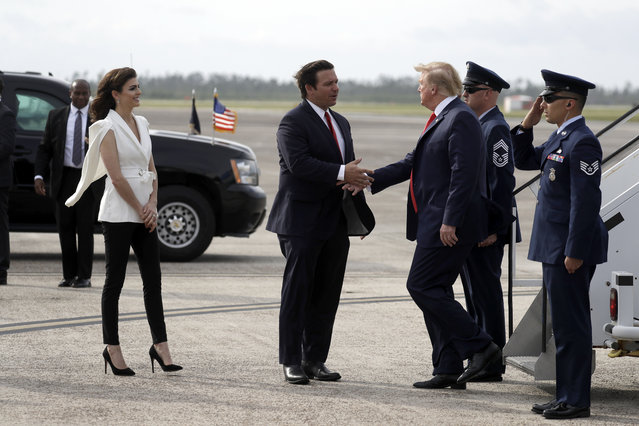 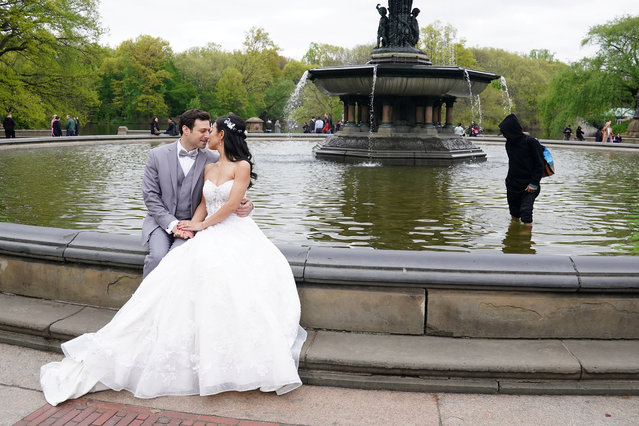 A bride and groom pose for photos as a man takes money out of Bethesda Fountain in Central Park in New York, New York, U.S., April 28, 2019. (Photo by Carlo Allegri/Reuters) 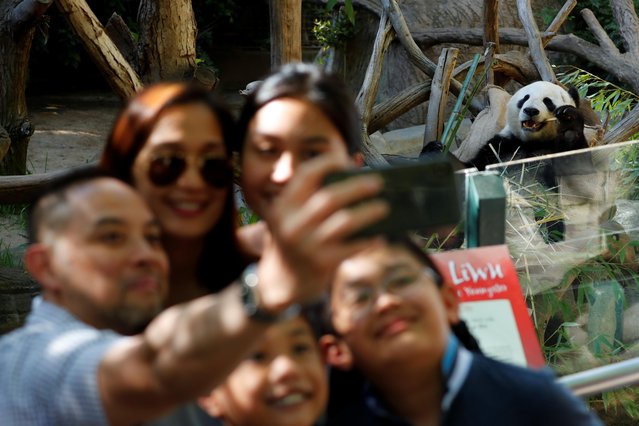 A family take a souvenir picture next to giant male panda Xiao Liwu, who was born at the San Diego Zoo and will be repatriated to China with his mother Bai Yun, bringing an end to a 23-year-long panda research program in San Diego, California, U.S., April 18, 2019. (Photo by Mike Blake/Reuters) 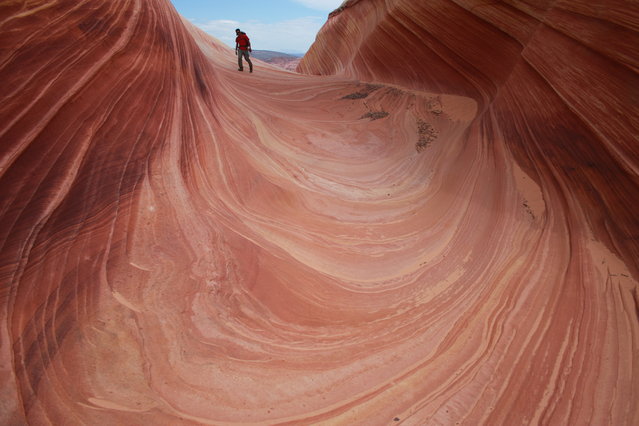 This May 28, 2013 file photo shows a on a rock formation known as The Wave in the Vermilion Cliffs National Monument in Arizona. A new proposal could mean bigger crowds at one of the most exclusive hiking spots in the southwestern United States. The Bureau of Land Management proposed changes Wednesday, May 8, 2019, that would increase daily visitor limits from 20 people to 96 people per day at The Wave, a popular rock formation near the Utah-Arizona border. (Photo by Brian Witte/AP Photo/File)
Edit Del
21 May 2019 00:01:00, post received 0 comments
Publication archive:
←   →
Popular tags:
All tags
Last searches: