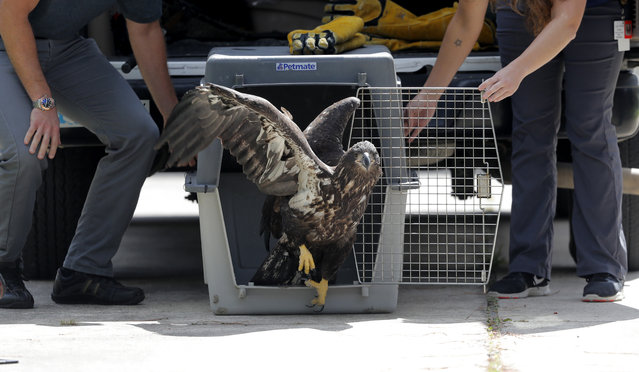 A formerly injured eaglet is released in a suburban New Orleans driveway, near its original nest, in Metairie, La., Tuesday, May 28, 2019. A bald eagle hatched this spring in a New Orleans suburb was released Tuesday in the same neighborhood after two weeks in Louisiana State University's Wildlife Hospital. Dozens of neighbors who have watched over the eagle family cheered as the mottled brown bird hopped out of the cage in which it had traveled from Baton Rouge and launched itself into the air. It sat for several minutes on the roof of a house in the shadow of its nest while a pair of mockingbirds dive-bombed it. Then it flew off. The eaglet had been taken to the LSU veterinary school Wildlife Hospital on May 11. It had been found walking in a nearby street, and barely able to fly. (Photo by Gerald Herbert/AP Photo) 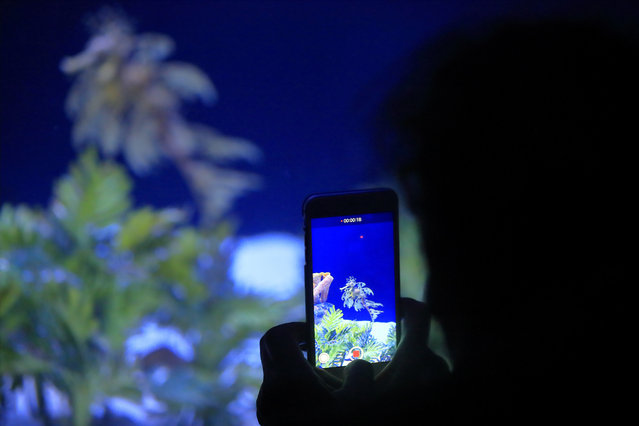 In this Friday, May 17, 2019 photo, a woman records an image of a sea dragon at the Birch Aquarium at the Scripps Institution of Oceanography at the University of California San Diego in San Diego. The Southern California aquarium has built what is believed to be one of the world's largest habitats for the surreal and mythical sea dragons outside Australia, where the native populations are threatened by pollution, warming oceans and the illegal pet and alternative medicine trades. (Photo by Gregory Bull/AP Photo) 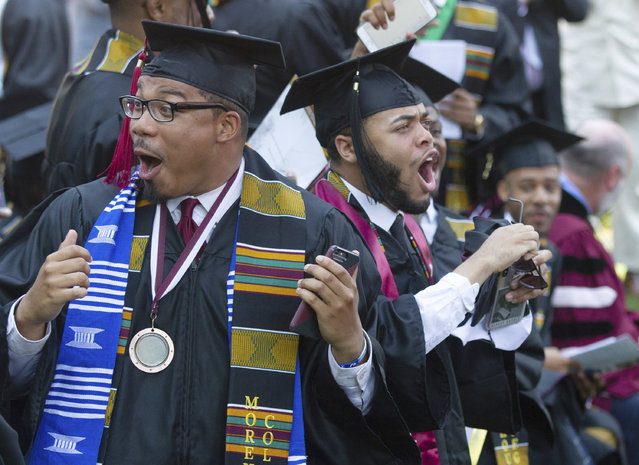 Graduates react after hearing billionaire technology investor and philanthropist Robert F. Smith say he will provide grants to wipe out the student debt of the entire 2019 graduating class at Morehouse College in Atlanta, Sunday, May 19, 2019. (Photo by Steve Schaefer/Atlanta Journal-Constitution via AP Photo) 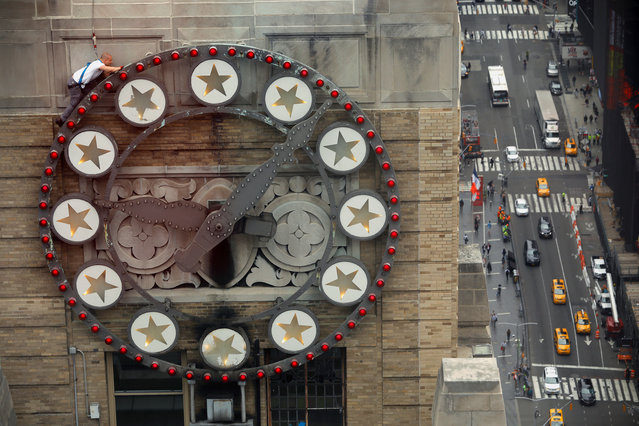 A worker climbs on a clock while replacing lightbulbs above Times Square on the Paramount building in New York City, New York, U.S., May 28, 2019. (Photo by Mike Segar/Reuters) 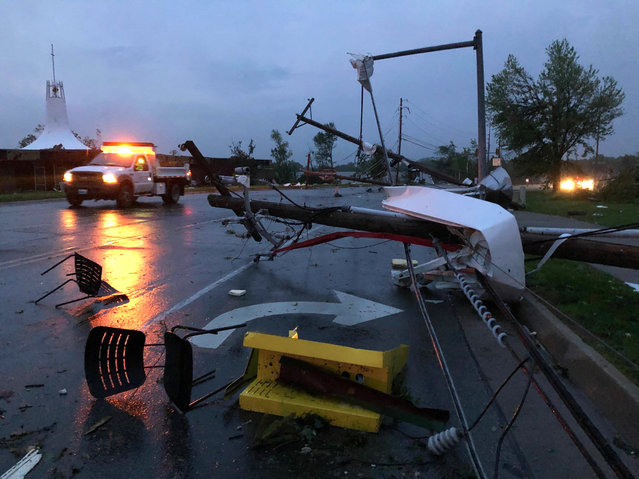 Plastic chairs lie in the road and metal from a damaged gas station roof is twisted around a downed power line in Jefferson City Missouri Thursday, May 23, 2019. The National Weather Service has confirmed a large and destructive tornado has touched down in Missouri's state capital, causing heavy damage and trapping multiple people in the wreckage of their homes. (Photo by David A. Lieb/AP Photo) 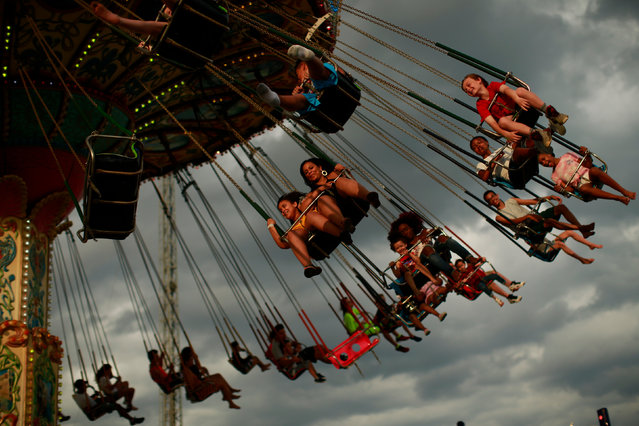 People enjoy a ride at an amusement park during Memorial Day weekend on May 26, 2019 in Seaside Heights, New Jersey. Memorial Day is the unofficial start of summer and this year New Jersey has banned smoking and vaping on nearly every public beach under tougher new restrictions. (Photo by Kena Betancur/Getty Images) 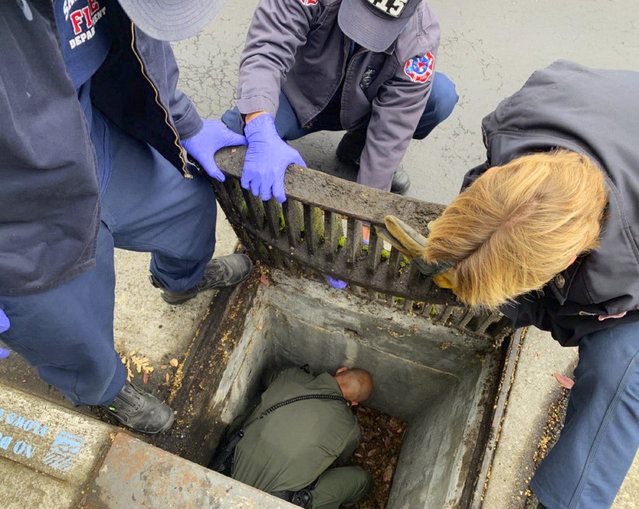 This photo provided by the Santa Clara County Sheriff's Office shows a deputy and firefighters working to rescue a 6-week-old kitten from a storm drain in Cupertino, Calif., Tuesday, May 21, 2019. A woman walking in Cupertino heard meowing and looked down to see the tiny ball of fur at the bottom of the drain Tuesday morning. The Sheriff's office says members of the San Jose Fire Department lifted the heavy metal grating on the drain and a deputy jumped down to rescue the orange and white calico. (Photo by Santa Clara County Sheriff's Office via AP Photo) 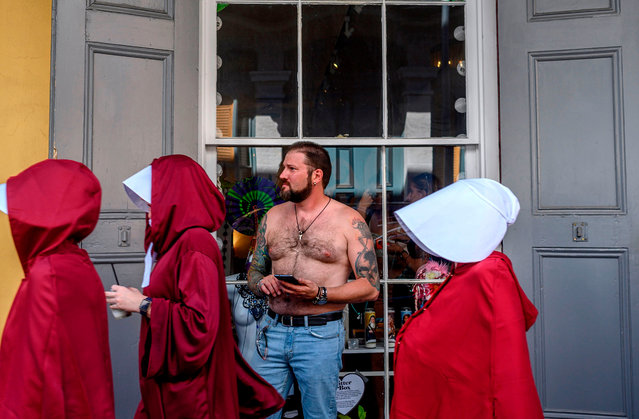 Handsmaid themed protesters march down the French Quarter of New Orleans, Louisiana, on May 25, 2019, to protest the proposed Heartbeat Bill that will ban abortion after 6 weeks in that state, scheduled for a vote on May 28. (Photo by Emily Kask/AFP Photo) 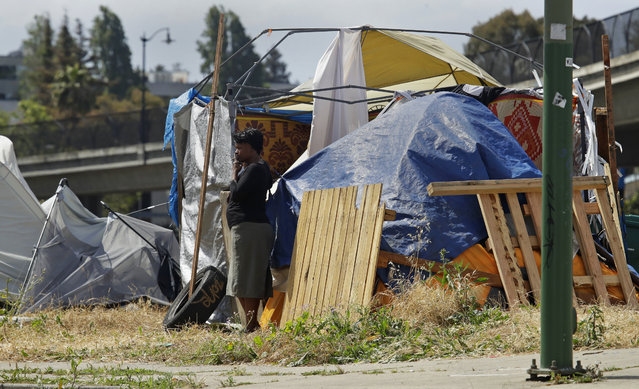 In this photo taken on Friday, May 17, 2019, a woman smokes a cigarette outside a homeless encampment in Oakland, Calif. California Gov. Gavin Newsom is creating a task force on homelessness as the state grapples with a housing crisis. Speaking Tuesday, May 21, in Oakland, Newsom described homelessness as an epidemic of statewide concern but says it will be best addressed at the local level. (Photo by Ben Margot/AP Photo/File) 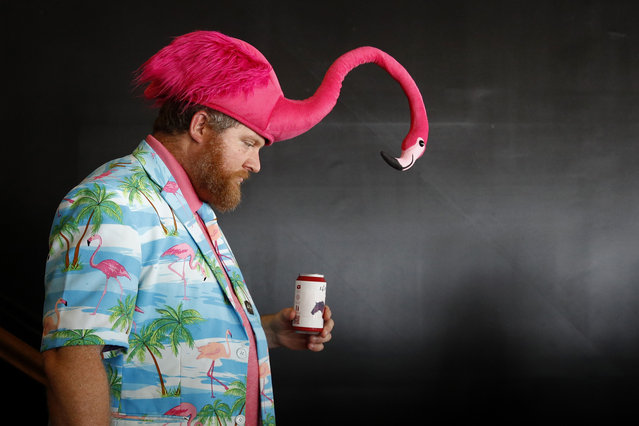 A spectator walks in the grandstand at Pimlico Race Course, Saturday, May 18, 2019, ahead of the Preakness Stakes horse race in Baltimore. (Photo by Patrick Semansky/AP Photo) 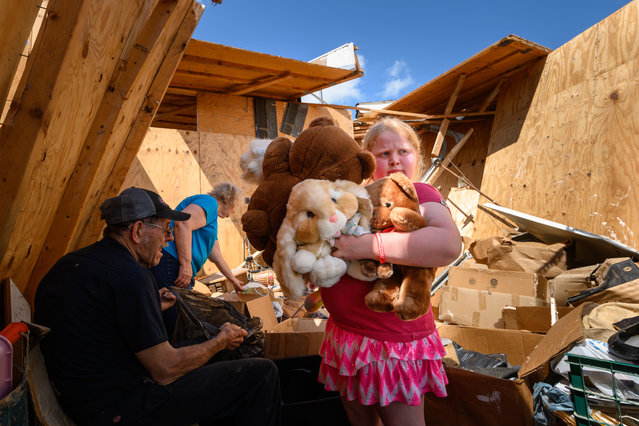 Nine-year-old Keeley Frank holds some stuffed animals her grandparents Al and Barb Scheidegger (at left) salvaged from their storage unit on May 23, 2019 in Jefferson City, Missouri. It was among many units destroyed by a tornado there on Thursday. A series of powerful tornadoes killed at least three people in southwestern Missouri causing extensive damage in Jefferson City, the state capital. (Photo by Reed Hoffmann/Getty Images) 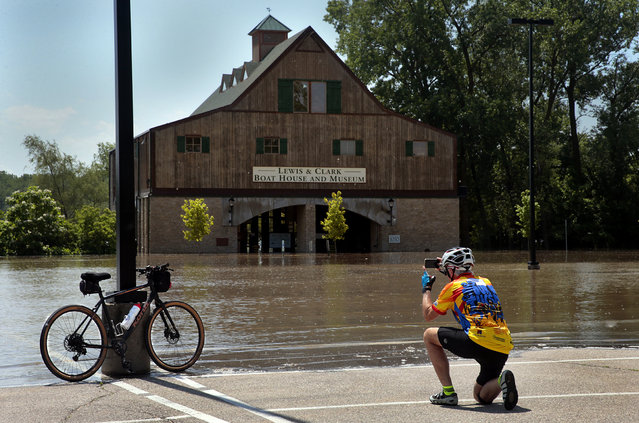 Andy Gaul of Tucson, Arizona photographs his bike in front of the flooded Lewis & Clark Boat House and Museum in Frontier Park on Friday, May 24, 2019. St. Charles officials closed the park and the Katy Trail due to Missouri River flooding, moving a weekend Irish Fest to New Town St. Charles. (Photo by Robert Cohen/St. Louis Post-Dispatch via AP Photo) 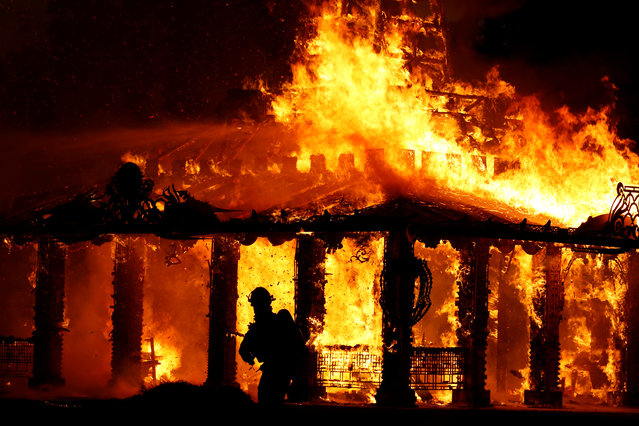 The “Temple of Time”, a structure built to serve as a healing place for those affected by the shooting at nearby Marjory Stoneman Douglas High School, is burned in a ceremonial fire in Coral Springs, Florida, U.S., May 19, 2019. (Photo by Joe Skipper/Reuters) 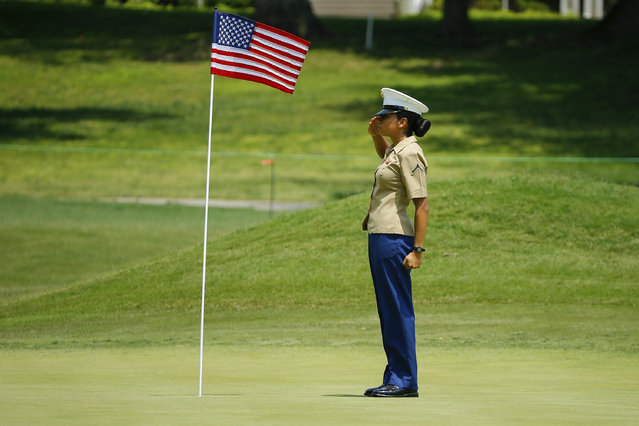 Pfc. Esmeralda Calderon stands and salutes the flag on the 15th green during the first round of the LPGA golf tournament at Kingsmill Resort and Golf Course in Williamsburg, Va., Thursday May 23, 2019. Pfc. Calderon, from San Antonio, Texas, is a Marine assigned to Naval Weapons Station Yorktown. (Photo by John Sudbrink/The Daily Press via AP Photo) 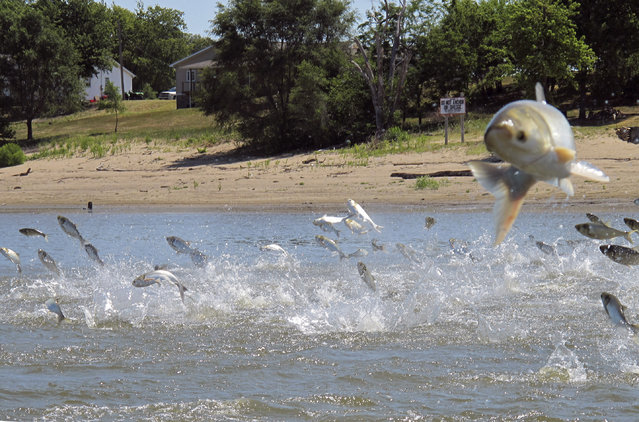 In this June 13, 2012, file photo, Asian carp, jolted by an electric current from a research boat, jump from the Illinois River near Havana, Ill. The U.S. Army Corps of Engineers' commanding officer has endorsed a $778 million plan for upgrading a lock-and-dam complex near Chicago to prevent Asian carp from invading the Great Lakes. Lt. Gen. Todd Semonite signed the final report Thursday, May 23, 2019. It now goes to Congress, which would need to give authorization and funding for the project to proceed. (Photo by John Flesher/AP Photo/File) 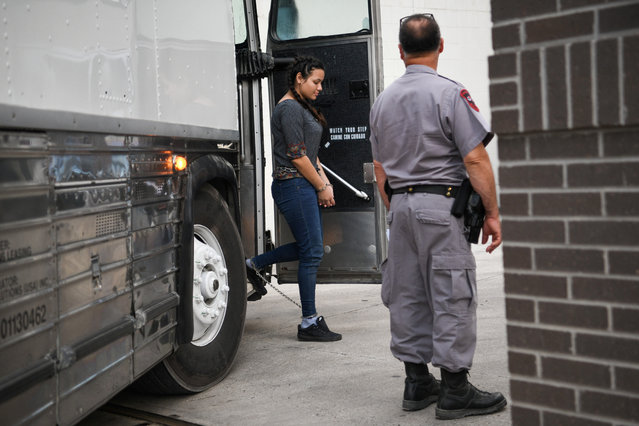 A shackled migrant woman in federal custody arrives for an immigration hearing at the U.S. federal courthouse in McAllen, Texas, U.S., May 20, 2019. (Photo by Loren Elliott/Reuters) 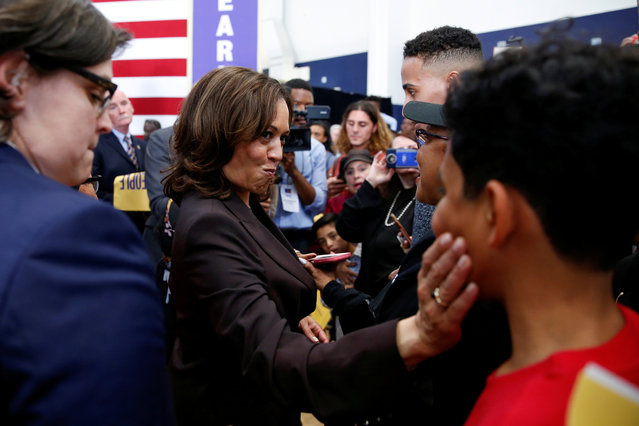 U.S. Senator Kamala Harris squeezes the cheeks of a young man after she had him shake her hand instead of making a high-five while greeting supporters following her first organizing event in Los Angeles as she campaigns in the 2020 Democratic presidential nomination race in Los Angeles, California, U.S., May 19, 2019. (Photo by Mike Blake/Reuters) 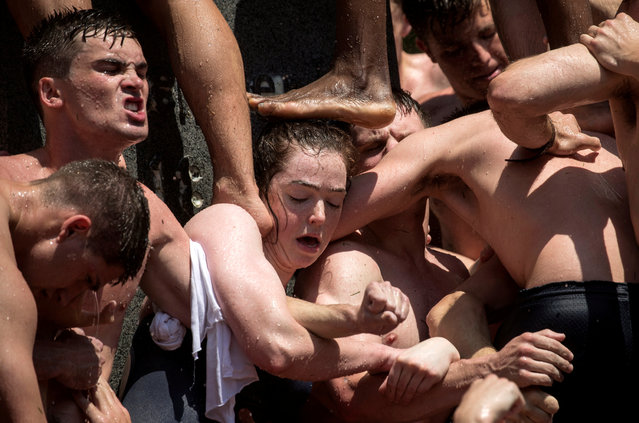 A girl supports her fellow plebes (freshmen) as they build a human pyramid to climb the 21-foot vegetable-shortening covered Herndon Monument at the U.S. Naval Academy in Annapolis, Maryland May 20, 2019. The midshipman who makes it to the top replaces the ‘dixie cup’ hat with a midshipman's hat, marking their class ascent to upperclassmen. (Photo by Kevin Lamarque/Reuters) 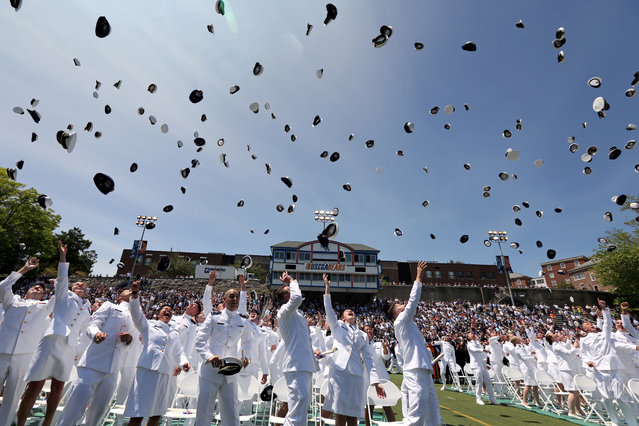 Members of the United States Coast Guard Academy, graduating class of 2019, throw their hats during a graduation ceremony at the U.S. Coast Guard Academy in New London, Connecticut, U.S., May 22, 2019. (Photo by Michelle McLoughlin/Reuters) 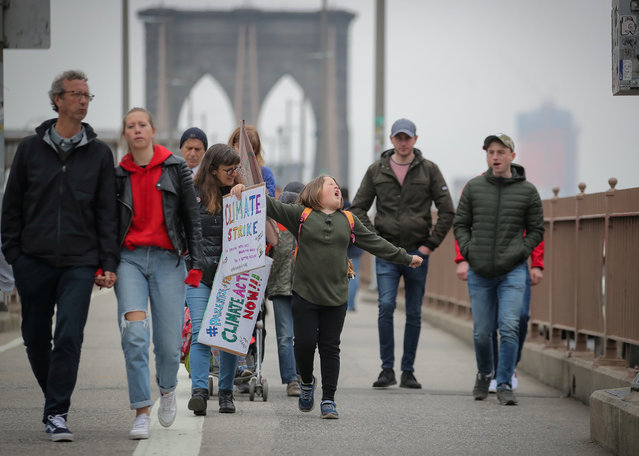