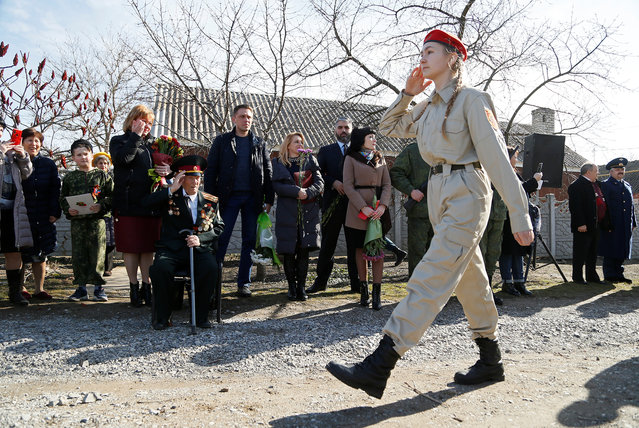 Vladimir Khlapov, a 97-year-old World War Two veteran, salutes during a military parade organized personally for him on his birthday, as part of preparing the celebration of the 75th anniversary of the victory over Nazi Germany in World War Two, in the rebel-controlled town of Dokuchaevsk in Donetsk region, Ukraine on March 4, 2020. (Photo by Alexander Ermochenko/Reuters) 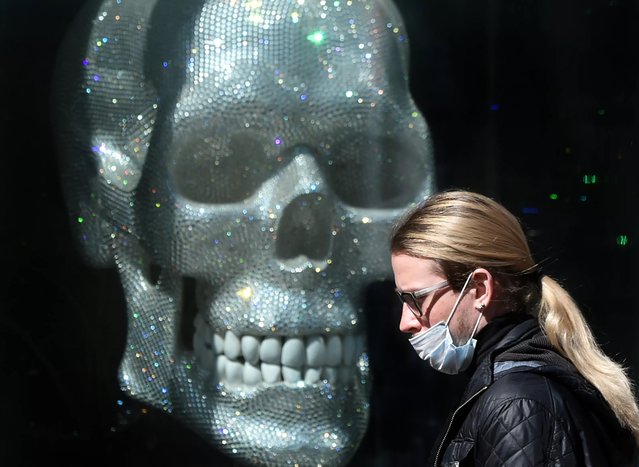 A man wearing a face mask, amid concerns over the spread of the novel coronavirus COVID-19, walks past a fashion boutique shop window decorated with a skull in the center of the Ukrainian capital of Kiev on April 9, 2020. (Photo by Sergei Supinsky/AFP Photo) 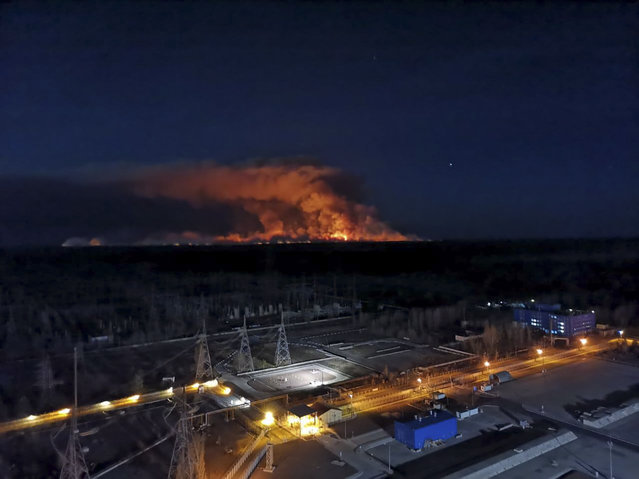 In this photo taken from the roof of Ukraine's Chernobyl nuclear power plant late Friday April 10, 2020, a forest fire is seen burning near the plant inside the exclusion zone. Ukrainian firefighters are labouring to put out two forest blazes in the area around the Chernobyl nuclear power station that was evacuated because of radioactive contamination after the 1986 explosion at the plant. (Photo by Ukrainian Police Press Office via AP Photo) 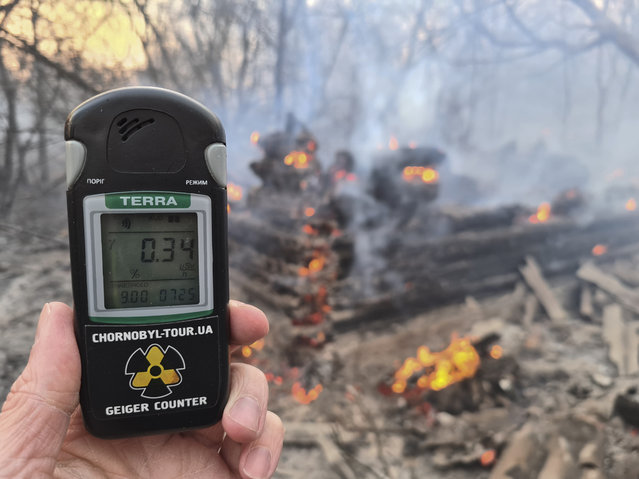 A Geiger counter shows increased radiation level against the background of the forest fire burning near the village of Volodymyrivka in the exclusion zone around the Chernobyl nuclear power plant, Ukraine, Sunday, April 5, 2020. (Photo by Yaroslav Yemelianenko/AP Photo) 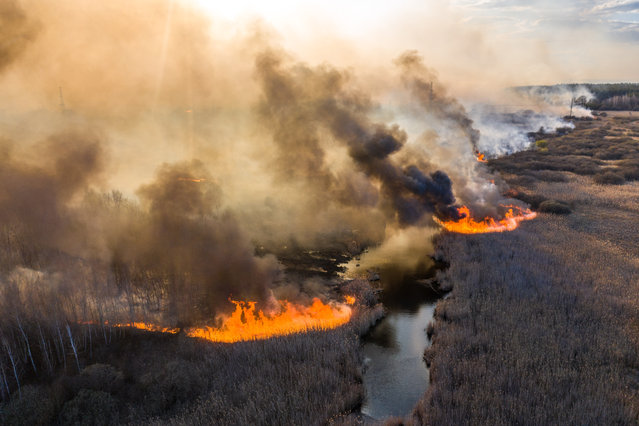 This picture taken on April 10, 2020, shows a field fire burning at a 30-kilometer (19-mile) Chernobyl exclusion zone, not far from the nuclear power plant. (Photo by Volodymyr Shuvayev/AFP Photo) 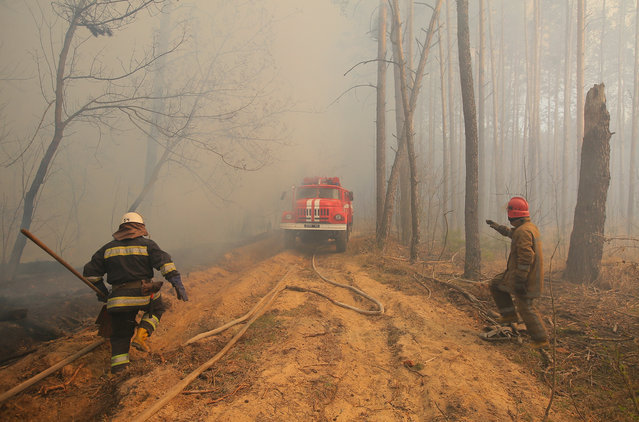 Ukrainian firemen fight with forest fire which burns near the village of Ragovka, close to the exclusion zone around the Chernobyl nuclear power plant, Ukraine, 10 April 2020 (issued 11 April 2020). Officials have been fighting fires in the exclusion zone since 04 April 2020. In early April 2020, NASA satellites observed several wildfires in northern Ukraine around the Chornobyl Exclusion Zone as local media report. Hundreds of firefighters and at least eight airborne units were working to extinguish fires in the Denysovets, Kotovsky, and Korogodsky forests, NASA's Earth Observatory reports. The territory is a long-vacated area near where an explosion at the Chernobyl Soviet nuclear plant in April 1986 sent a plume of radioactive fallout high into the air and across swaths of Europe. (Photo by EPA-EFE/Stringer) 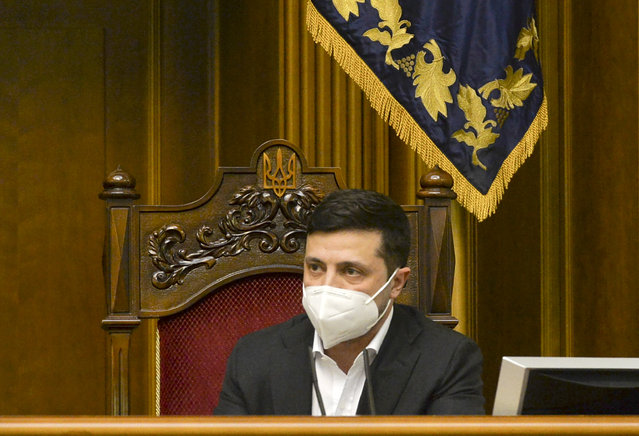 Ukrainian President Volodymyr Zelenskiy wearing a face mask to protect against coronavirus speaks during an extraordinary parliamentary session in Kyiv, Ukraine, Monday, March 30, 2020. Ukraine has been under quarantine since March 12. (Photo by AP Photo/Stringer) 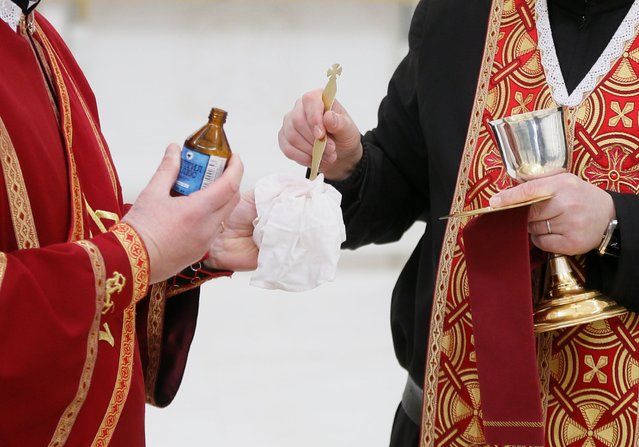 Clergymen disinfect the holy spoon for communion, as a measure to prevent the spread of coronavirus disease (COVID-19), during a service at the Cathedral of the Resurrection of Christ in Kiev, Ukraine on March 22, 2020. (Photo by Valentyn Ogirenko/Reuters) 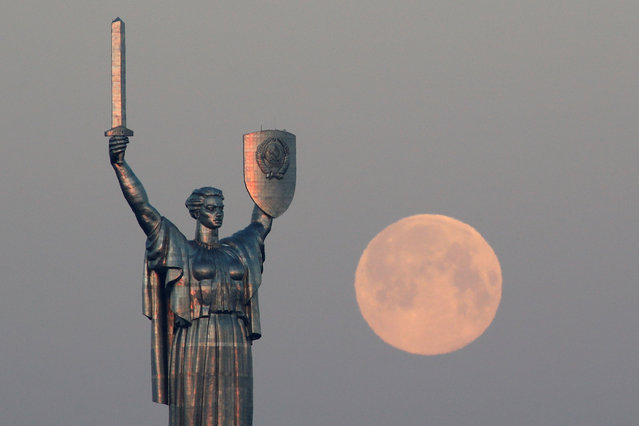 The Pink Supermoon sets behind the giant “Mother of the Motherland” monument in central Kiev, Ukraine on April 8, 2020. (Photo by Valentyn Ogirenko/Reuters) 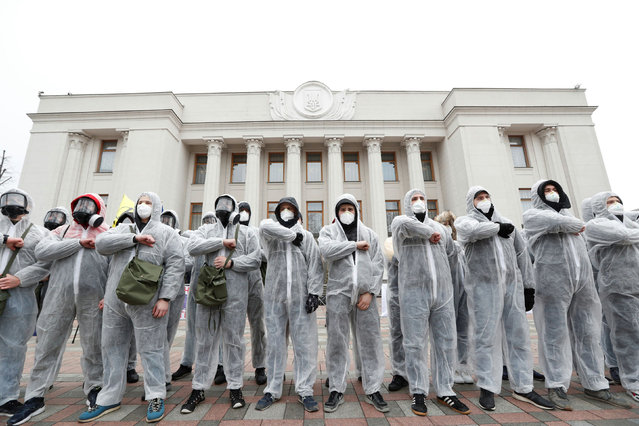 Activists of the National Corps political party wearing protective gear take part in a rally demanding to quarantine lawmakers amid coronavirus disease (COVID-19) concerns, in front of the Ukrainian parliament building in Kiev, Ukraine on March 17, 2020. (Photo by Valentyn Ogirenko/Reuters) 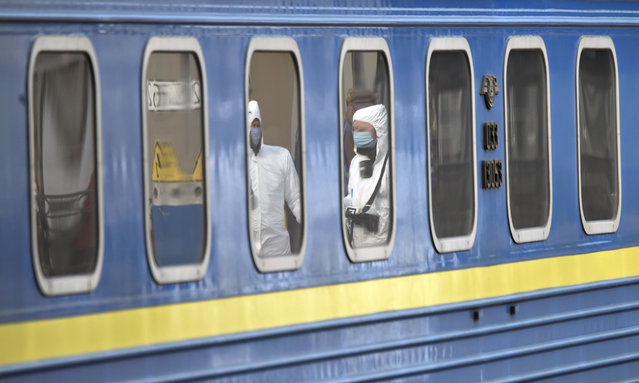 Medical workers are reflected in the windows of a carriage as they walk to check the passengers in a train with Ukrainians evacuated from Moscow at at Kiev railway station on March 29, 2020. Due to the situation with the novel coronavirus (COVID-19), a special train will be launched on the route Kiev – Moscow – Kiev to evacuate Russians from Ukraine and Ukrainians from the Russian Federation ahead of Ukrainian and Russian borders closing. (Photo by Sergei Supinsky/AFP Photo) 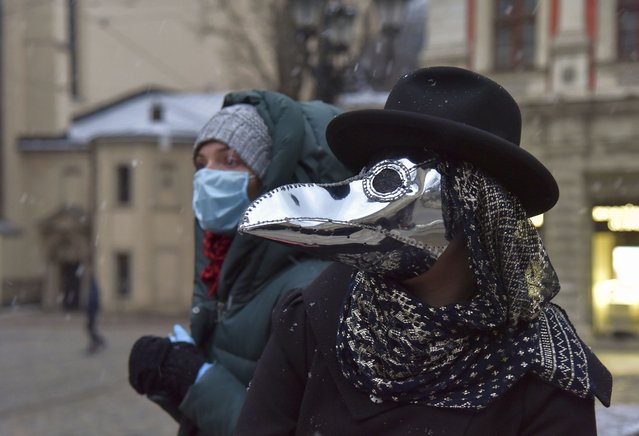 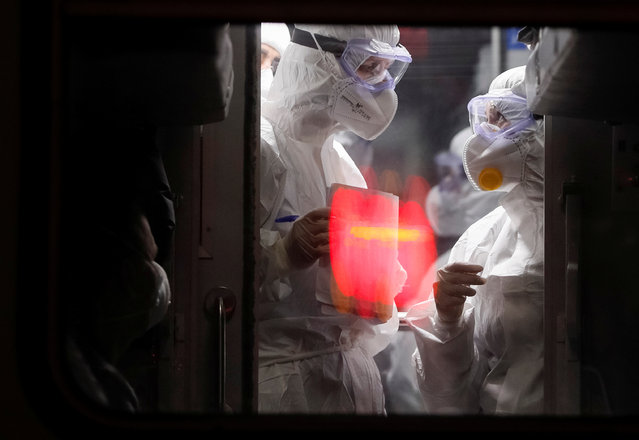 Medical staff members check the Ukrainian citizens evacuated by train from Latvia due of the spread of the coronavirus disease (COVID-19), upon arrival at the central railway station in Kiev, Ukraine on March 23, 2020. (Photo by Gleb Garanich/Reuters) 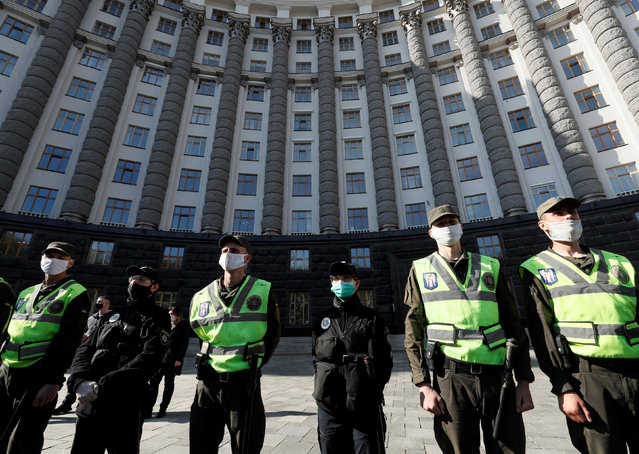 Police officers and members of the National Guard of Ukraine stand guard during a protest to demand support from the government for small businesses and easing of lockdown measures put into place because of the coronavirus disease (COVID-19) outbreak, in front of the Ukrainian cabinet of ministers building in central Kiev, Ukraine on April 29, 2020. (Photo by Gleb Garanich/Reuters) 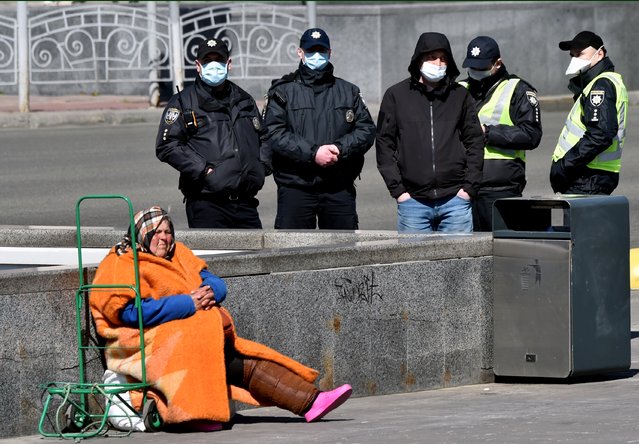 An elderly homeless woman asks for alms as police wearing face masks, amid concerns over the spread of the novel coronavirus COVID-19, patrol the streets of the Ukrainian capital of Kiev on April 5, 2020 a day before the lockdown tightening, imposed by authorities to attempt to prevent the spread of COVID-19 coronavirus disease. (Photo by Sergei Supinsky/AFP Photo) 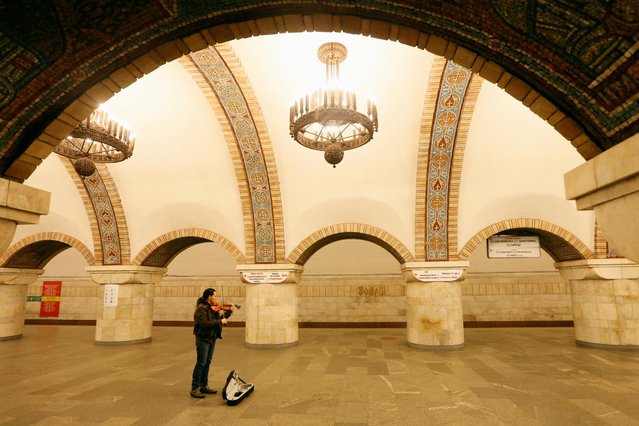 A musician plays violin as he waits for the last train before metro shutdown amid coronavirus (COVID-19) concerns, at Zoloti Vorota station in central Kiev, Ukraine on March 17, 2020. (Photo by Valentyn Ogirenko/Reuters) 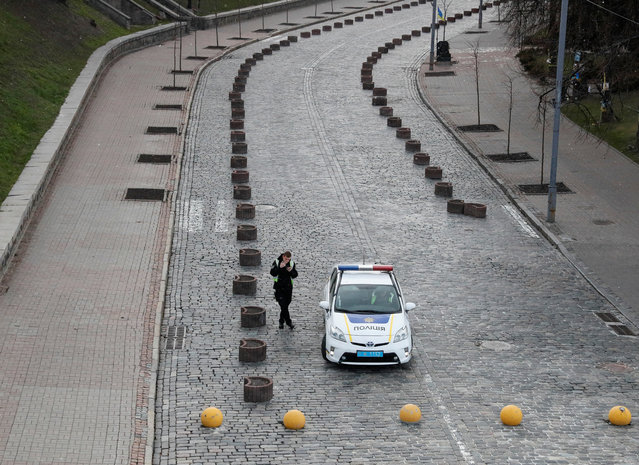 A police officer smokes in an empty street while patrolling central Kiev, Ukraine on March 31, 2020. (Photo by Gleb Garanich/Reuters) 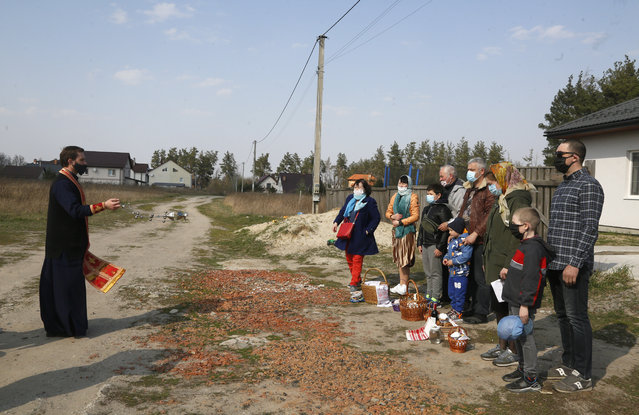 A priest of the Ukrainian Orthodox Church Nazariy, wearing a face mask to protect against coronavirus, blesses family members on the Easter eve near their house in the village of Nove close to capital Kyiv, Ukraine, Saturday, April, 18, 2020. All the Ukrainian churches have been closed for people because of COVID-19 outbreak, and believers wait for the priest right near their houses. For Orthodox Christians, this is normally a time of reflection, communal mourning and joyful release, of centuries-old ceremonies steeped in symbolism and tradition. But this year, Easter – by far the most significant religious holiday for the world's roughly 300 million Orthodox – has essentially been cancelled. (Photo by Efrem Lukatsky/AP Photo) 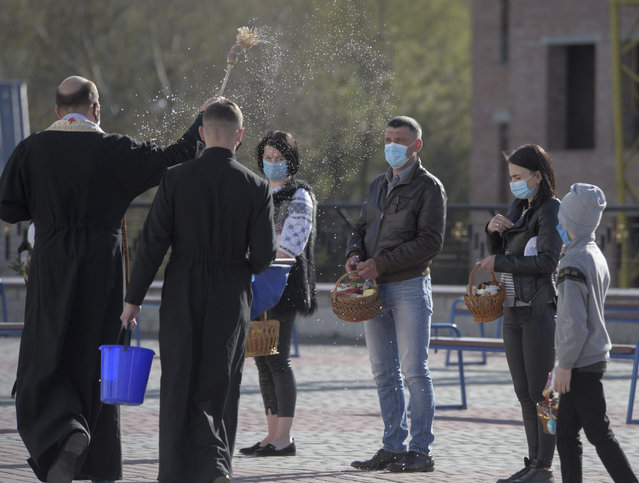 Orthodox priest blesses believers during Orthodox Easter celebration in Western-Ukrainian city of Lviv, Ukraine, 18 April 2020. Easter is celebrated around the world by Christians to mark the resurrection of Jesus Christ from the dead and the foundation of the Christian faith. Ukrainian President Volodymyr Zelensky has urged Ukrainian citizens to comply with the quarantine and stay at home on Easter. (Photo by Markiian Lyseiko/EPA/EFE) 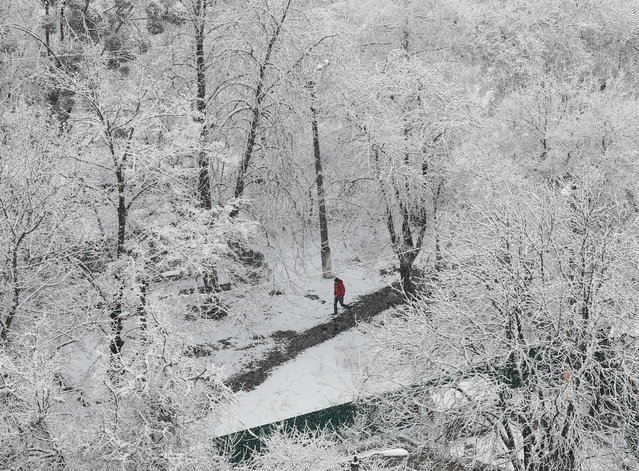 A man walks amidst snow-covered trees in Kiev, Ukraine on March 22, 2020. (Photo by Gleb Garanich/Reuters) 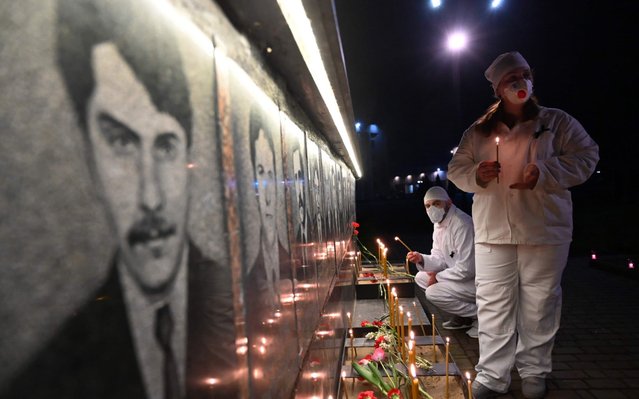 Chernobyl plant workers wearing face masks light candles at the monument to Chernobyl victims in Slavutich, the city where the power station's personnel lived, some 50 kilometres (30 miles) from the accident site on April 25, 2020 during a memorial ceremony amid the COVID-19 pandemic, caused by the novel coronavirus. Ukraine on April 26, 2017 marks the 34th anniversary of the Chernobyl disaster which was the world's worst nuclear accident. (Photo by Sergei Supinsky/AFP Photo)
Edit Del
02 May 2020 00:05:00, post received 0 comments
Publication archive:
←   →
Popular tags:
All tags
Last searches: