Fact A Look at Life in Vietnam 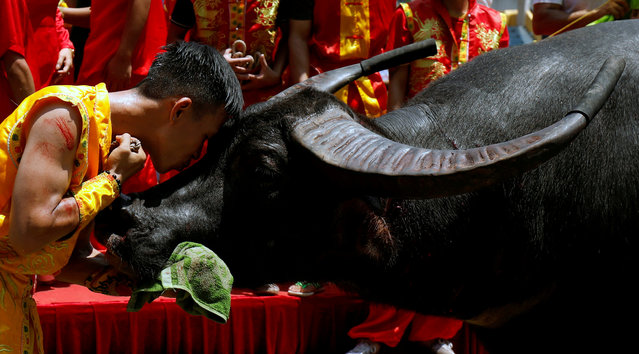 A farmer kisses his buffalo after the victory during annual buffalo fighting festival in Do Son coastal resort town, in Hai Phong, Vietnam on September 7, 2019. (Photo by Nguyen Huy/Reuters/Kham) 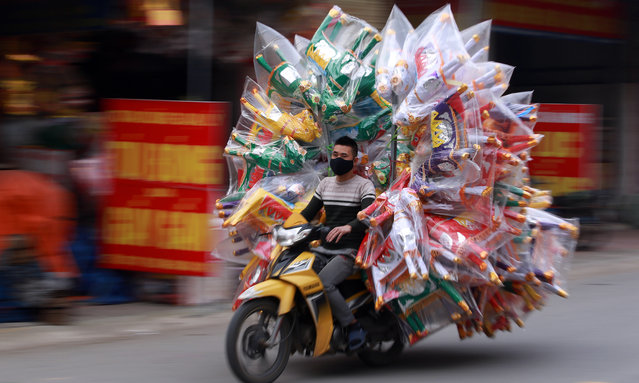 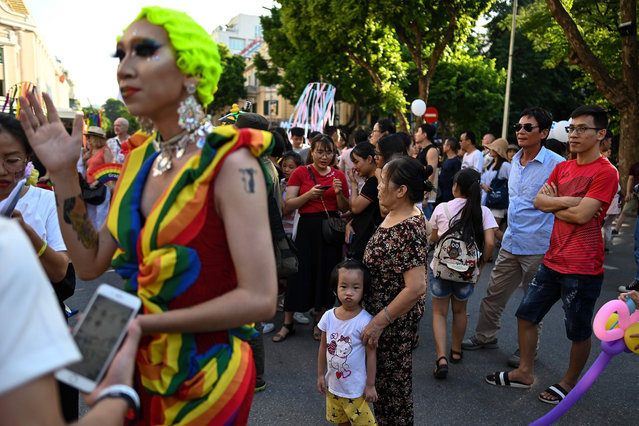 Vietnamese men (R) look on as participants take part in the annual Hanoi Pride 2019 parade, which champions LGBT rights in the country, in Hanoi on September 22, 2019. (Photo by Manan Vatsyayana/AFP Photo) 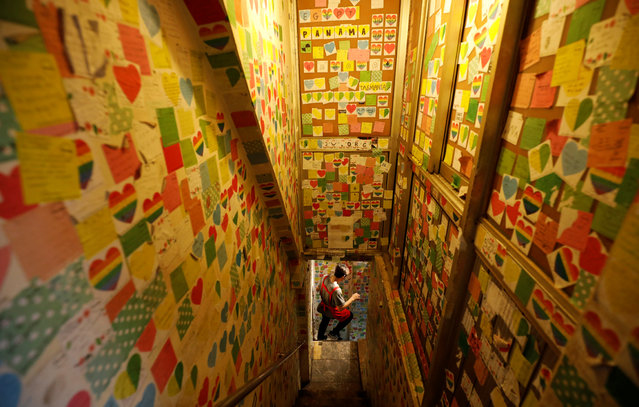 An employee is seen at the Note Coffee shop which walls, ceiling and chairs are covered with post-it notes from people around the World, in Hanoi, Vietnam on July 25, 2019. (Photo by Reuters/Kham) 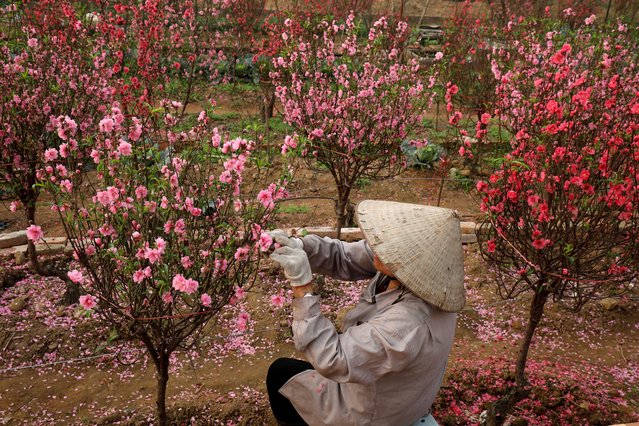 A Vietnamese farmer waits for customers ahead of the Vietnamese “Tet” (Lunar New Year festival) in a peach blossom flowers field in Hanoi, Vietnam, January 21, 2020. (Photo by Reuters/Kham) 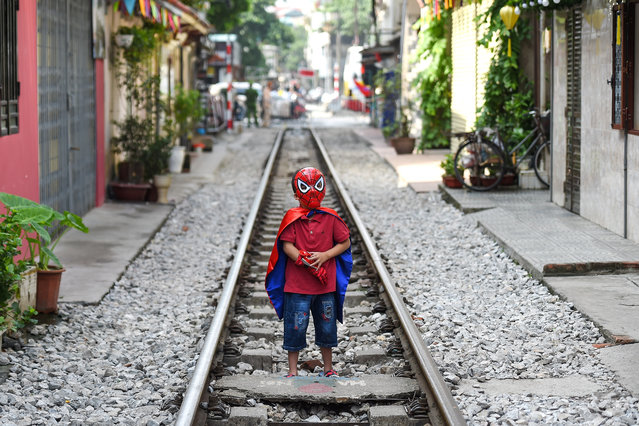 A boy wearing a Spiderman costume stands on Hanoi's popular train street on October 10, 2019 following a municipal authorities order to deal with cafes and “ensure safety” on the railway track. (Photo by Nhac Nguyen/AFP Photo) 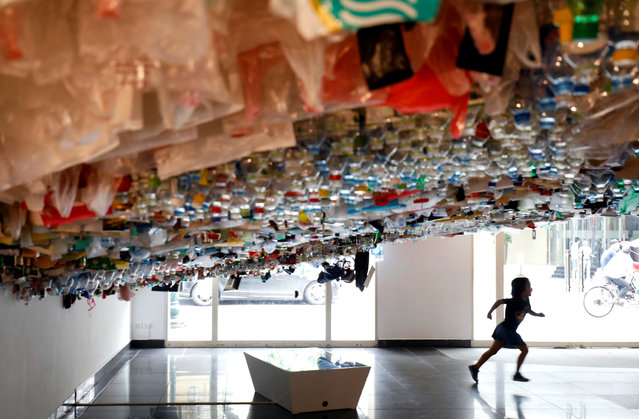 A girl runs during the exhibition of a hanging art installation made from scraps of plastic bags, bottles, cans and containers at an exhibition entitled Reduce, at the French Cultural Center in Hanoi, Vietnam on August 2, 2019. (Photo by Reuters/Kham) 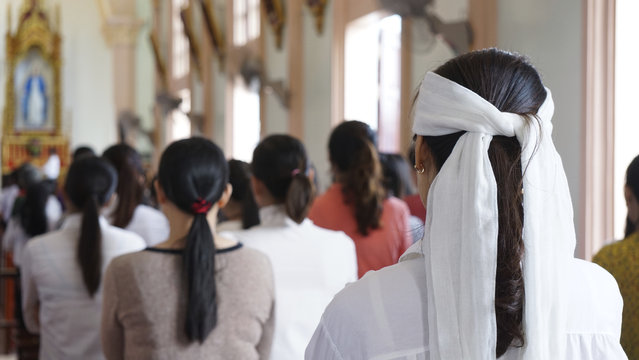 A woman wearing a white head band, traditionally worn by relatives of a deceased person during the funeral in Vietnam to show sign of mourning, attends a Sunday Mass at Phu Tang church in Yen Thanh district, Nghe An province, Vietnam Sunday, October 27, 2019. The attendees pray for the victims of the U.K truck deaths in which local villagers are feared to be among the ill-fated migrants. (Photo by Linh Do/AP Photo) 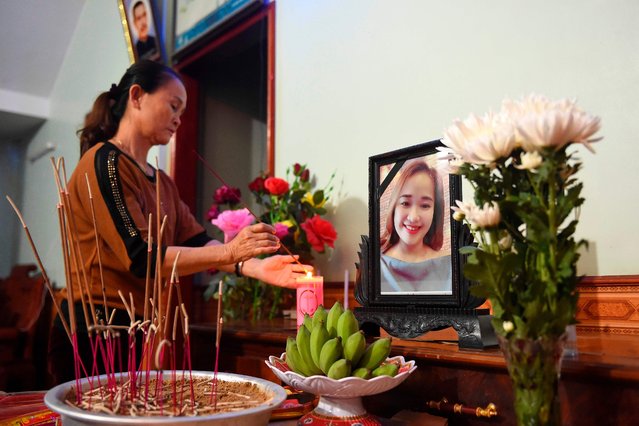 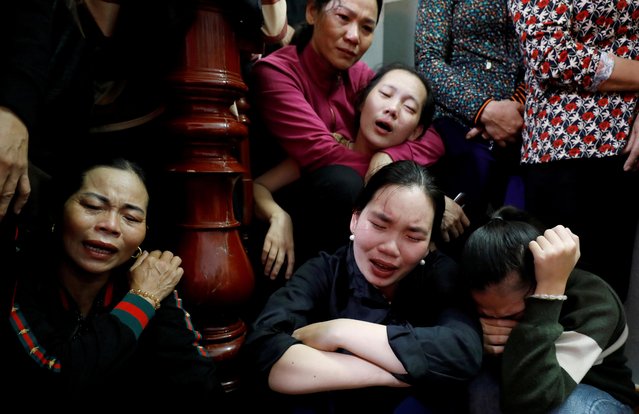 Relatives of John Hoang Van Tiep, a victim who was found dead in the back of a British truck last month, mourn near his coffin during his funeral at home in Nghe An province, Vietnam on November 27, 2019. (Photo by Reuters/Kham) 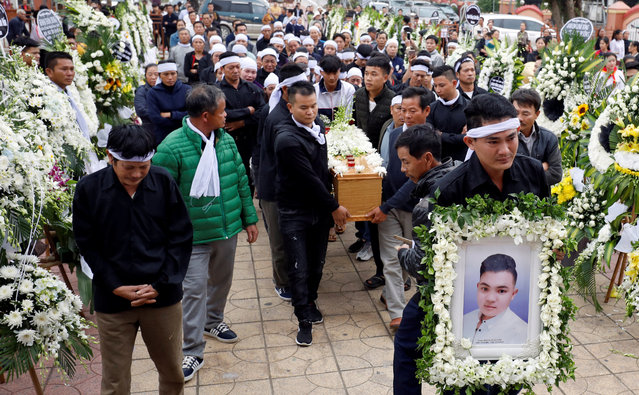 Relatives of John Hoang Van Tiep, a victim who was found dead in the back of a British truck last month, carry his coffin to a church for his funeral in Nghe An province, Vietnam on November 28, 2019. (Photo by Reuters/Kham) 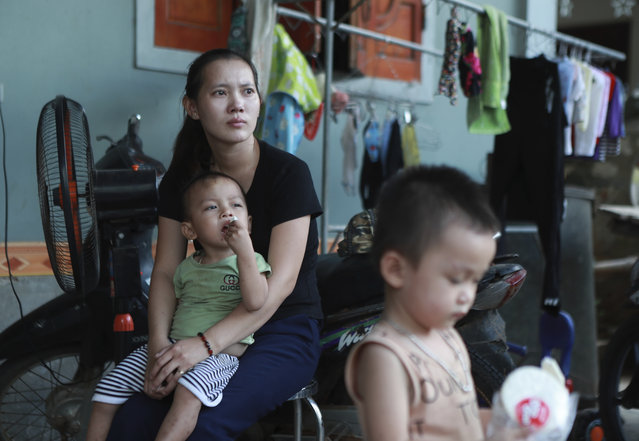 In this October 28, 2019, photo, Hoang Thi Nhiem, older sister of Hoang Van Tiep, who is feared to be among the England truck dead, holds her son in Dien Thinh village, Nghe An province, Vietnam. For many Vietnamese, a job in a Western European country is seen as a path to prosperity worth breaking the law for. But the risks of doing so are high and the consequences can be deadly, as the discovery of 39 bodies in a truck in England last week proved. (Photo by Hau Dinh/AP Photo) 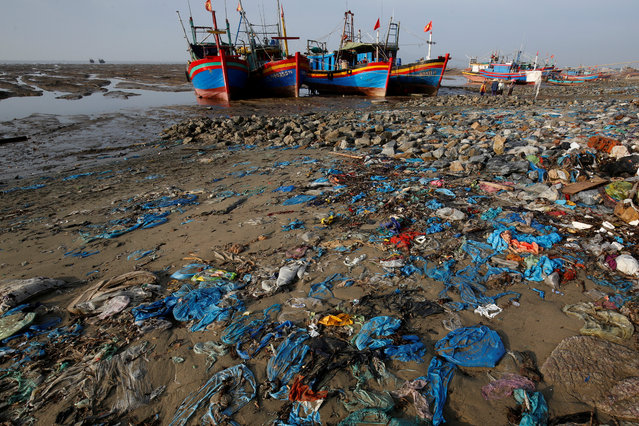 Fishermen boats are seen at a beach covered with plastic waste in Thanh Hoa province, Vietnam on June 4, 2018. (Photo by Nguyen Huy Kham/Reuters) 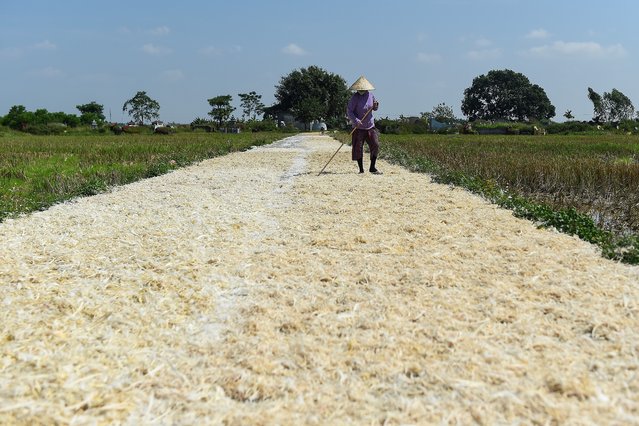 A Vietnamese woman spreads chicken feathers for drying on a street in Hanoi on October 22, 2019. (Photo by Nhac Nguyen/AFP Photo) 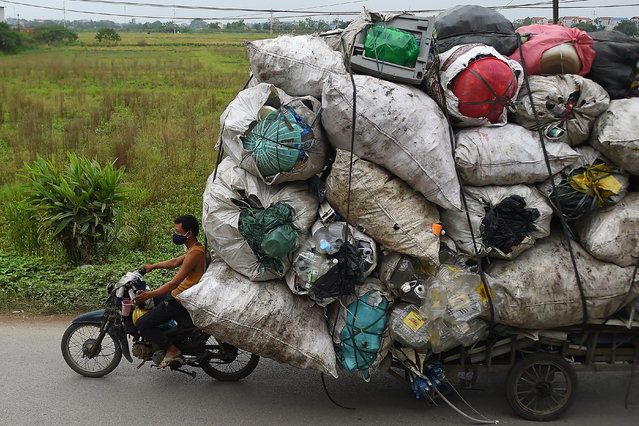 Waste collectors transport plastic scrap for recycling in the suburbs of Hanoi on October 15, 2019. (Photo by Nhac Nguyen/AFP Photo) 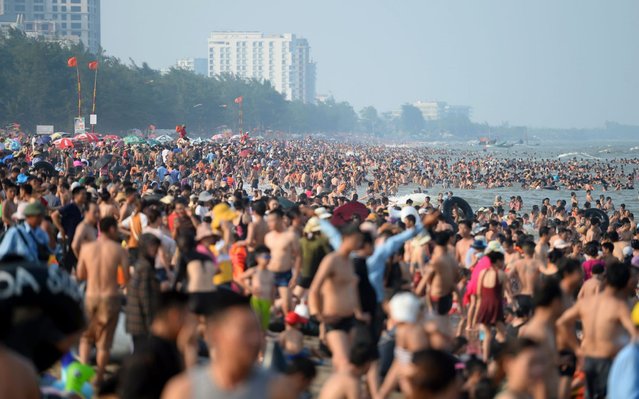 This picture taken on July 20, 2019 shows people relaxing on Sam Son beach in Thanh Hoa province. There are few beaches in northern Vietnam, and Sam Son in Thanh Hoa province has long been a popular destination for Vietnamese daytrippers. But its beauty has proven both a blessing and a curse, leading vacationers to pack out the 16 kilometer-long (9.9 mile-long) beach. (Photo by Nhac Nguyen/AFP) 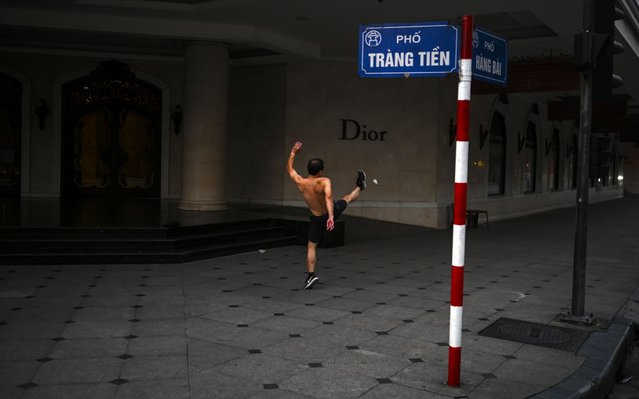 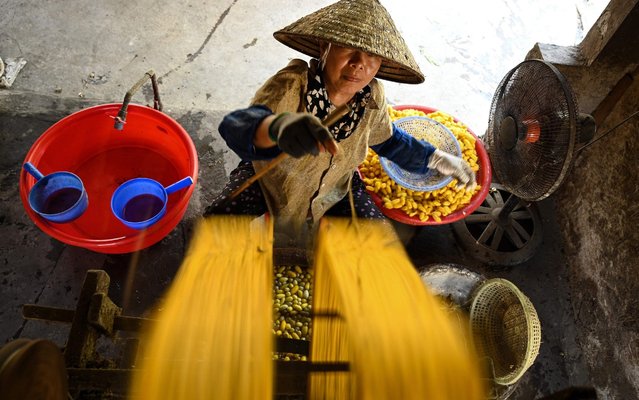 This photograph taken on September 17, 2019 shows a worker collecting yellow silk threads on a bobbbin inside a workshop in Co Chat village in Vietnam's Nam Dinh province. Cocoons bob over boiling water as silk is rapidly teased out, spinning on reels under the watchful gaze of women hard at work in Vietnam's Co Chat village, where households have been making thread for more than a century. (Photo by Manan Vatsyayana/AFP Photo) 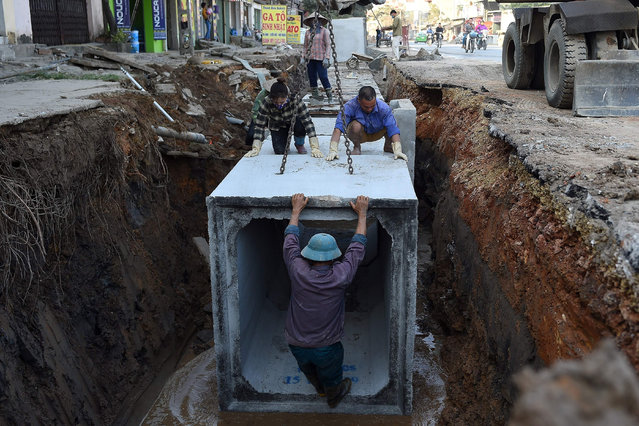 Workers install underground drainage on a street in Hanoi on December 4, 2019. (Photo by Nhac Nguyen/AFP Photo) 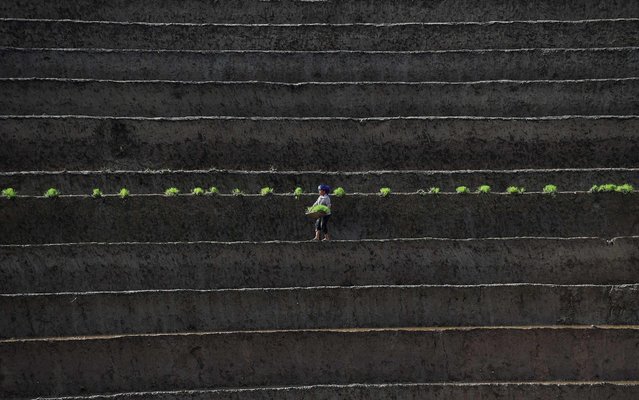 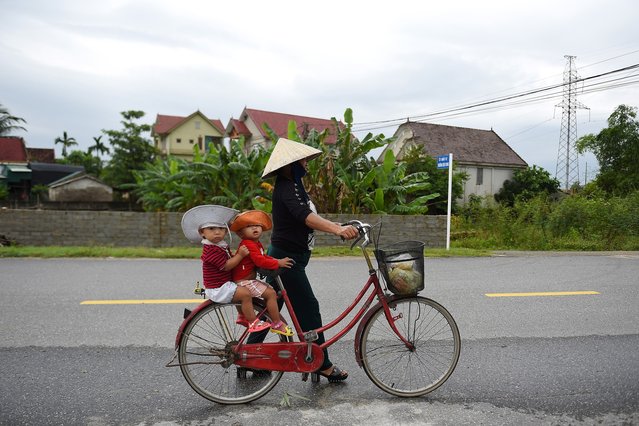 A woman carries children on a bicycle in Nghe An province where families of missing Vietnamese migrants reside on October 29, 2019. For up to $50,000, Vietnamese migrants can get the “VIP package” to Britain – flight, fake passport and even a lawyer – illegal, but billed as safer than cheaper overland routes by people smugglers who provide a menu of options for those trying to reach the UK. (Photo by Nhac Nguyen/AFP Photo) 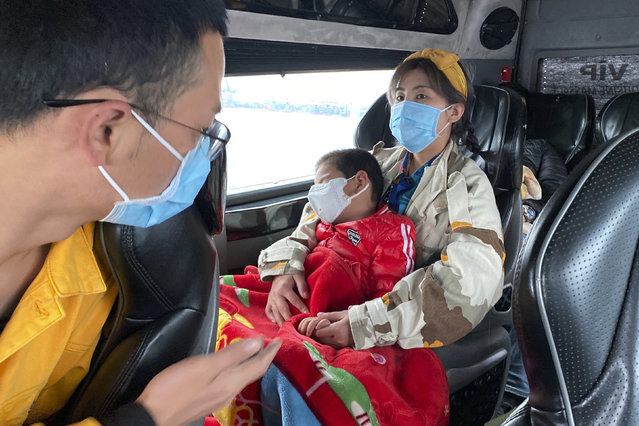 People wear masks on a bus in Quang Ninh province, Vietnam Tuesday, January 28, 2018. China on Tuesday reported 25 more deaths from a new viral disease, as the U.S. government prepared to fly Americans out of the city at the center of the outbreak. (Photo by Hau Dinh/AP Photo) 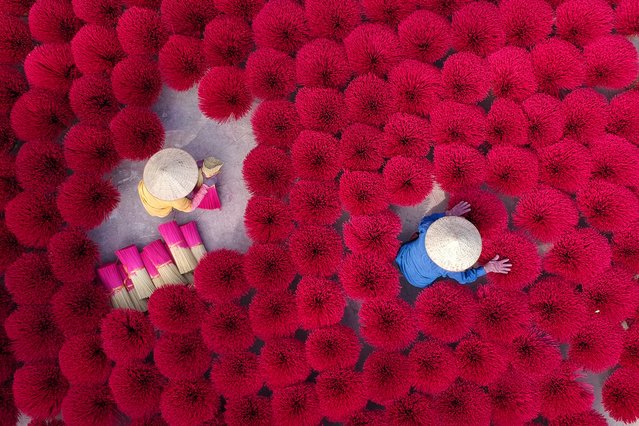