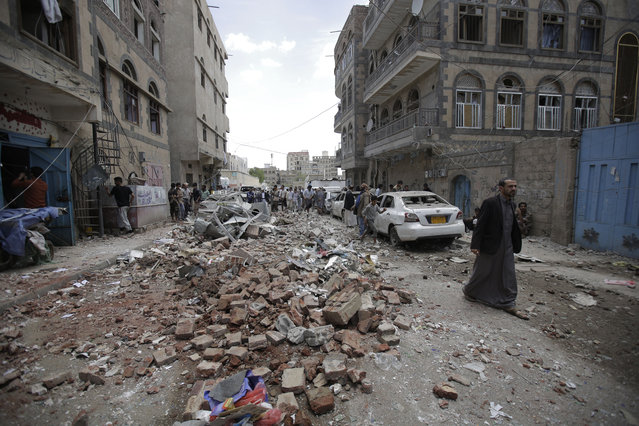 People inspect the site of an airstrike by Saudi-led coalition forces, in Sanaa, Yemen, Thursday, May, 16, 2019. Yemen's human rights minister says heavy fighting is underway in the country's south as rebel Houthis push to gain more territory from government forces and their allies. The clashes come as the Saudi-led coalition carried out airstrikes on the capital, Sanaa, earlier on Thursday, targeting the Houthis and killing at least three civilians. (Photo by Hani Mohammed/AP Photo) 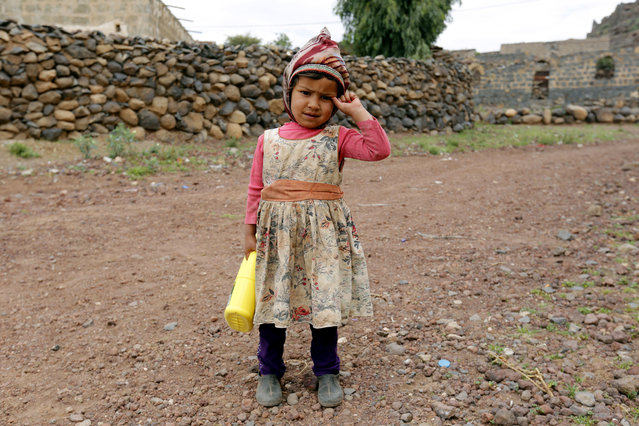 A conflict-ridden Yemeni child holds a plastic bottle of cooking oil provided by Mona Relief Yemen at a village on the outskirts of Sana'a, Yemen, 27 August 2019. The ongoing conflict in Yemen since 2015 has created the worst humanitarian crisis in the world, where some 80 percent of Yemen's 26-million population are in need of humanitarian assistance. (Photo by Yahya Arhab/EPA/EFE) 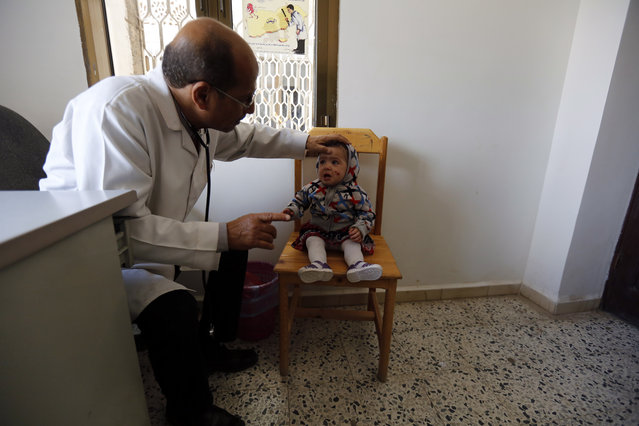 A doctor checks a child at a health center in Sana’a, Yemen, 11 June 2019. According to a recent report of the United Nations Children's Fund (UNICEF), mothers and babies are amongst the most highly vulnerable in Yemen where every two hours, one mother and six newborns die because of complications during pregnancy or birth, due to more than four years of escalating fighting in the Arab country. (Photo by Yahya Arhab/EPA/EFE) 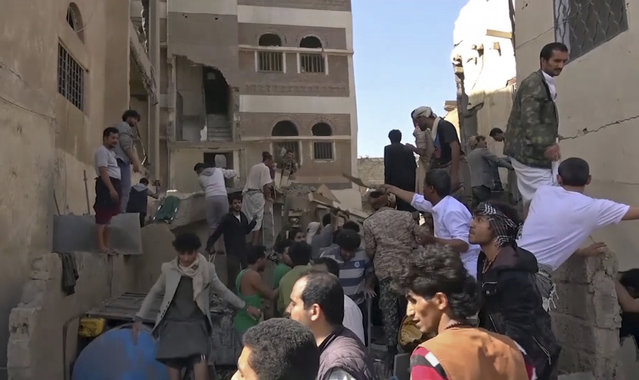 In this frame grab from from video, people search in the rubble following Saudi-led coalition airstrikes that killed at least six, including children, officials said, in the residential center of the capital, Sanaa, Yemen. The Sanaa airstrikes came after Yemen's Iran-backed Houthi rebels, who control the capital, launched a drone attack earlier in the week on a critical oil pipeline in Saudi Arabia, Tehran's biggest rival in the region. (Photo by AP Photo) 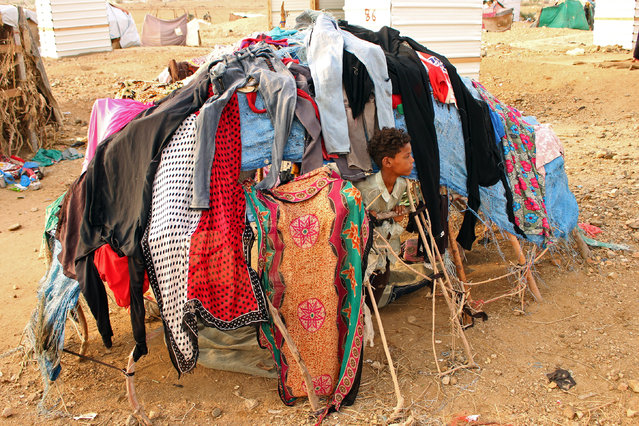 A displaced Yemeni child who fled the fightings is pictured at a makeshift camp in the district of Abs, in Yemen's northwestern Hajjah province on June 10, 2019. Saudi air defence forces on June 10 intercepted two drones launched by Huthi rebels from neighbouring Yemen, state media reported, as the Iran-aligned militia steps up attacks on the kingdom. The drones targeted Khamis Mushait in the kingdom's south and caused no damage or casualties, the Saudi-led coalition fighting in Yemen said in a brief statement released early Tuesday by the official Saudi Press Agency (SPA). (Photo by Essa Ahmed/AFP Photo) 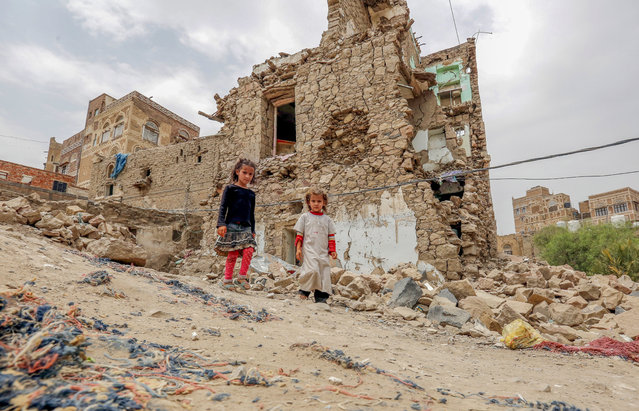 Yemeni children look on at the site of a historic building destroyed by a previous Saudi-led airstrike, in the old city of Sana'a, Yemen, 07 July 2019. According to reports, UNESCO has added two cities in Yemen to the List of World Heritage in Danger, including the historic city of Sana'a which is a dense warren of centuries-old mud-brick houses, due to the damage caused to the cultural heritage of Sana'a as a result of ongoing armed conflict in Yemen since March 2015. Sana'a, listed as a world heritage site by UNESCO in 1986, has been inhabited for more than 2,500 years. It is made up of some 8,000 buildings, including its distinctive multi-story tower houses, most of them are between 200 and 500 years old. (Photo by Yahya Arhab/EPA/EFE) 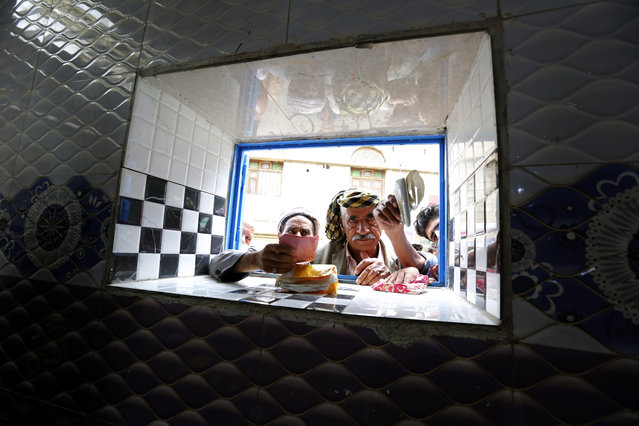 Conflict-affected men wait to get free bread provided by a local charity bakery during the holy fasting month of Ramadan in Sana’a, Yemen, 18 May 2019. Muslims around the world celebrate the holy month of Ramadan by praying during the night time and abstaining from eating, drinking, and sexual acts during the period between sunrise and sunset. Ramadan is the ninth month in the Islamic calendar and it is believed that the revelation of the first verse in Koran was during its last 10 nights. (Photo by Yahya Arhab/EPA/EFE) 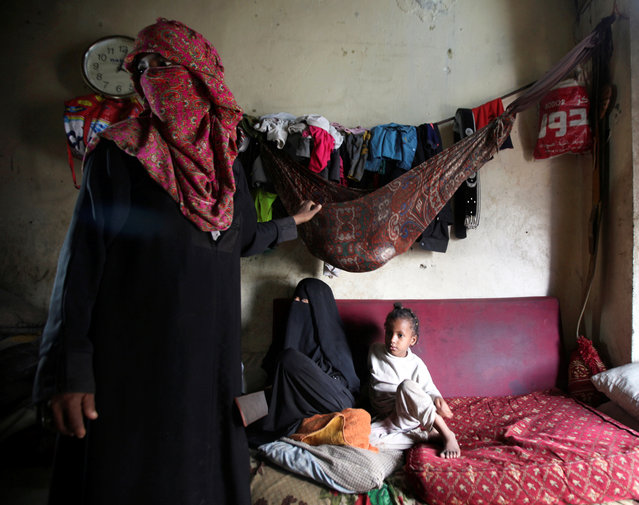 A displaced family from Yemen's Red Sea port city of Hodeida is pictured in a shelter in Sanaa, Yemen on May 12, 2019. (Photo by Khaled Abdullah/Reuters) 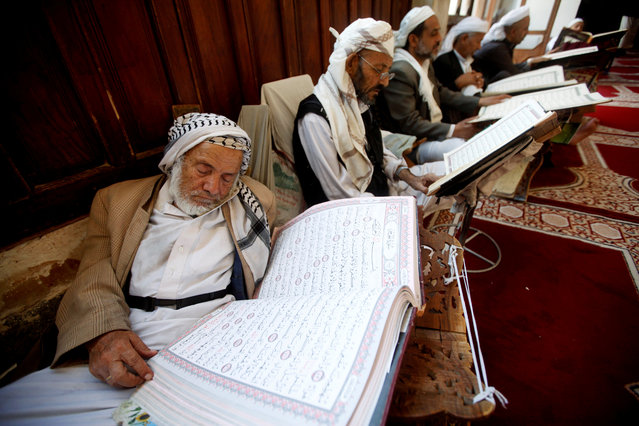 A man rests while reading the Koran at the Grand Mosque, during the holy month of Ramadan in Sanaa, Yemen on May 30, 2019. (Photo by Mohamed al-Sayaghi/Reuters) 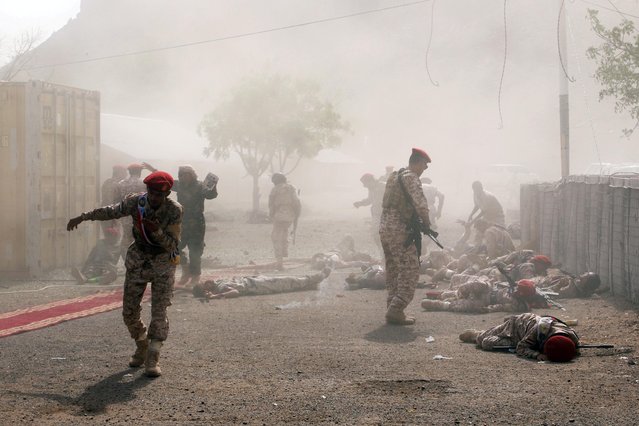 Soldiers lie on the ground after a missile attack on a military parade during a graduation ceremony for newly recruited troopers in Aden, Yemen, August 1, 2019. Yemen's Iran-aligned Houthi movement launched missile and drone attacks on Thursday on a military parade in Aden, the seat of government and a stronghold of the Saudi-led military coalition, killing 36 people according to the interior ministry. (Photo by Fawaz Salman/Reuters) 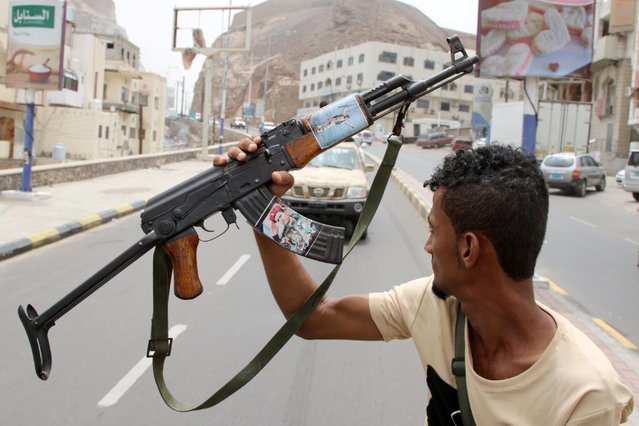 A member of Yemen's southern separatist holds his weapon with a picture of Muneer al-Yafee during a funeral of Brigadier General Muneer al-Yafee and his comrades killed in a Houthi missile attack, in Aden, Yemen, August 7, 2019. (Photo by Fawaz Salman/Reuters) 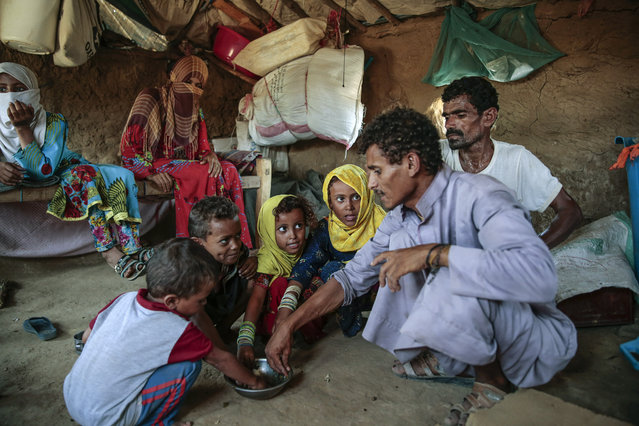 In this October 1, 2018, file photo, a man feeds children halas, a climbing vine of green leaves, in Aslam, Hajjah, Yemen. The U.N. food agency has begun a partial suspension of food aid to areas of Yemen controlled by the rebels amid accusations they were diverting aid from the war-torn country's hungriest people, the group said Thursday, June 20, 2019. (Photo by Hani Mohammed/AP Photo/File) 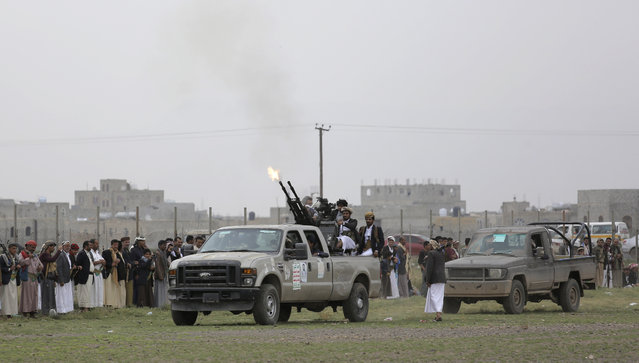 Houthi rebel fighters fire their weapons in the air as they take off to a battlefront following a gathering aimed at mobilizing more fighters for the Houthi movement, in Sanaa, Yemen, Thursday, August 1, 2019. The conflict in Yemen began with the 2014 takeover of Sanaa by the Houthis, who drove out the internationally recognized government. Months later, in March 2015, a Saudi-led coalition launched its air campaign to prevent the rebels from overrunning the country's south. (Photo by Hani Mohammed/AP Photo) 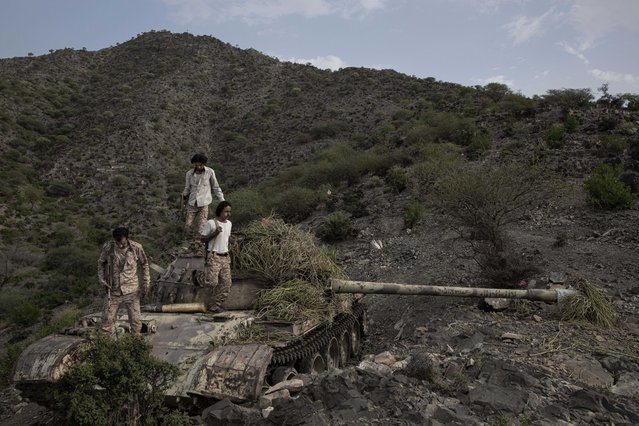 In this Monday, August 5, 2019 photo, fighters from a militia known as the Security Belt, that is funded and armed by the United Arab Emirates, stand on a tank camouflaged with brush, at the Gabhet Hajr frontline with Houthi rebels, in Yemen's Dhale province. Yemen’s civil war has been deadlocked for months, with neither side making major gains. At one of the most active front lines, militiamen backed by the Saudi-led coalition are dug in, exchanging shelling every night with Iranian-allied Houthi rebels only a few hundred meters away. (Photo by Nariman El-Mofty/AP Photo) 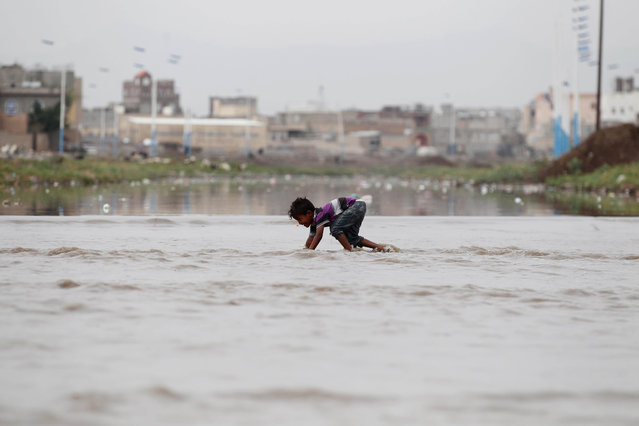 A yemeni boy wades through a flooded street after heavy rains in Sana'a, Yemen, 26 July 2019. As Yemen enters the rainy season from July to September, the United Nations says there are fears of a spread of cholera, a waterborne disease which is endemic in the country. (Photo by Yahya Arhab/EPA/EFE) 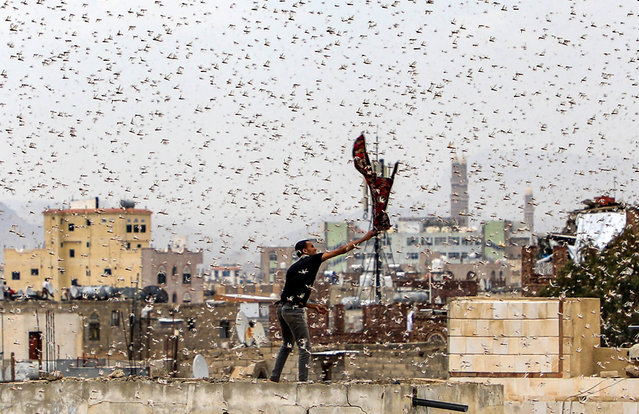 A man tries to catch locusts while standing on a rooftop as they swarm over the Huthi rebel-held Yemeni capital Sanaa on July 28, 2019. (Photo by Mohammed Huwais/AFP Photo) 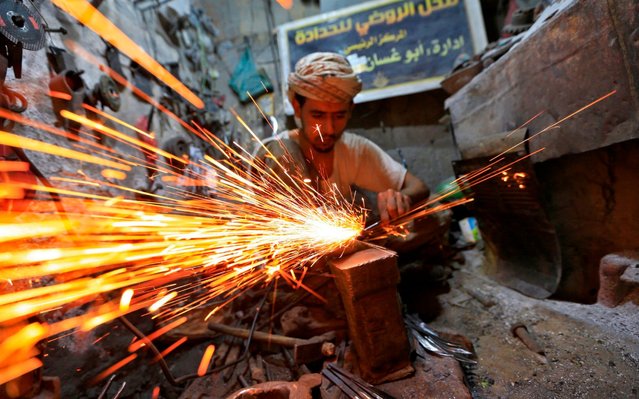 A Yemeni craftsman sharpens knives in the market place of Sanaa's old city, on July 24, 2019. (Photo by Mohammed Huwais/AFP Photo) 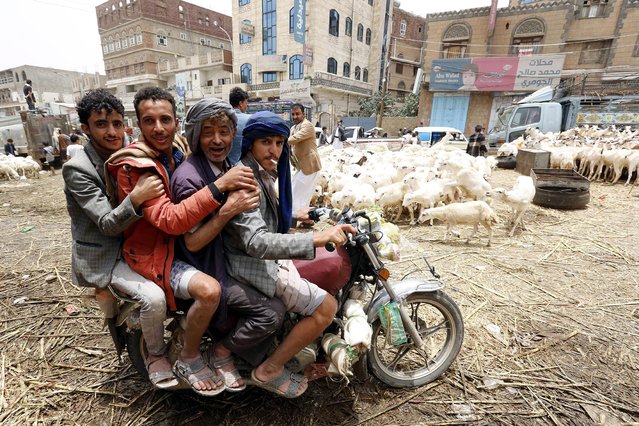 Four men ride a motorbike past sacrificial animals displayed for sale ahead of the Eid al-Adha festival at a livestock market in Sana'a, Yemen, 08 August 2019. Eid al-Adha is the holiest of the two Muslims holidays celebrated each year; it marks the yearly Muslim pilgrimage (Hajj) to visit Mecca, Islam's holiest place. Muslims slaughter a sacrificial animal and split the meat into three parts: one for family, one for friends and relatives, and one for the poor and needy. (Photo by Yahya Arhab/EPA/EFE)
Edit Del
29 Aug 2019 00:03:00, post received 0 comments
Publication archive:
←   →
Popular tags:
All tags
Last searches: