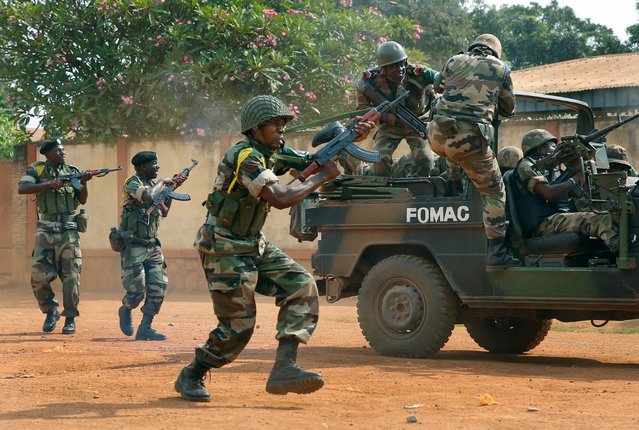 FOMAC troops, regional peacekeepers, fire their guns as they evacuate Muslim clerics from the St. Jacques Church in Bangui, Central African Republic on Thursday, December 12, 2013. An angry crowd had gathered outside the church following rumors that a Seleka general was inside. The Seleka is an alliance of mostly Muslim rebels from the north who tossed out the country's Christian president in a coup. (Photo by Jerome Delay/AP Photo) 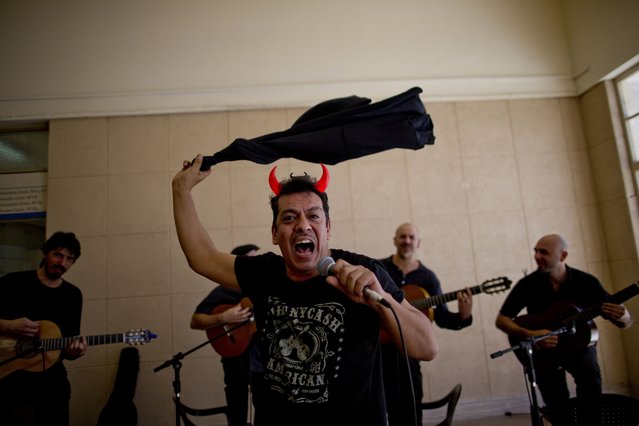 Black Rodriguez Mendez sings a tango during the annual festival called “All of us are crazy for tango” at the all male psychiatric Hospital Borda in Buenos Aires, Argentina on Wednesday, December 4, 2013. The program holds classes every other Wednesday. Its name plays off a common expression for mental illness, reflecting the enthusiasm of both patients and visitors for Argentina's national dance. (Photo by Natacha Pisarenko/AP Photo) 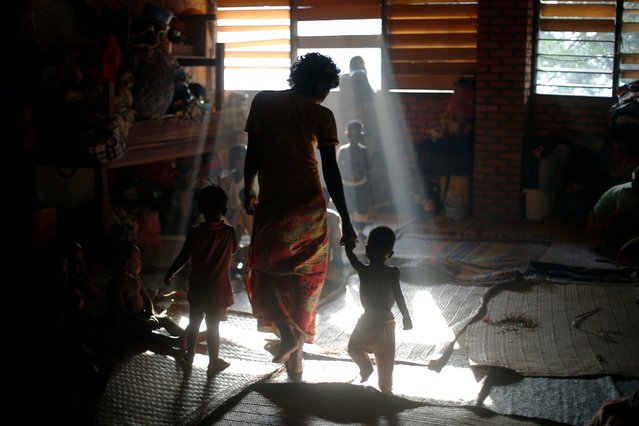 A displaced mother walks with her two children in Bangui's monastery, where she and over 10,000 others found refuge in Bangui, Central African Republic on Sunday, December 8, 2013. Red Cross officials say over 400 have died since Christian militias attacked the capital the previous week. (Photo by Jerome Delay/AP Photo) 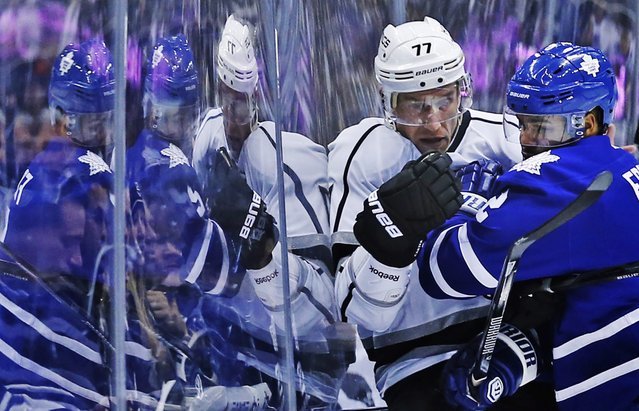 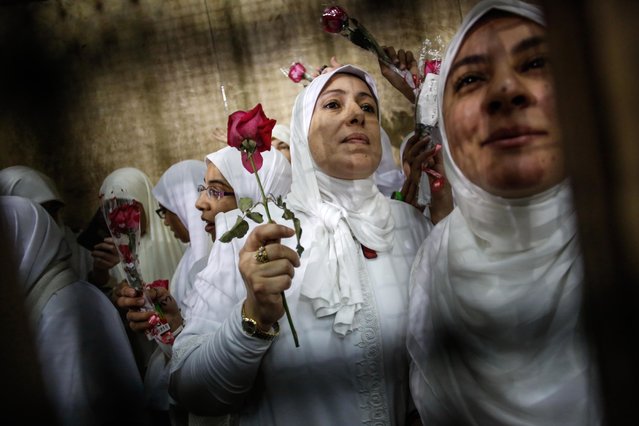 Female supporters of ousted President Mohammed Morsi stand inside the defendants' cage in a courtroom in Alexandria, Egypt on Saturday, December 7, 2013. A defense lawyer says an Egyptian appeal court has sentenced 14 women to a suspended year for protesting in support of Islamist-ousted President Mohammed Morsi, overturning a harsh sentence of 11 years that has caused an outcry. (Photo by Eman Helal/AP Photo) 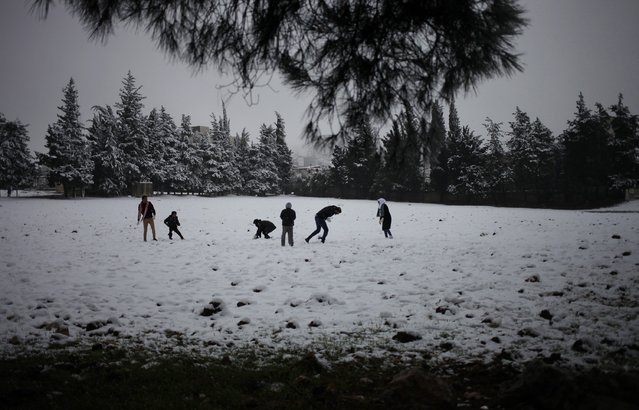 People play in a snow-covered field during a storm in Amman, Jordan on Thursday, December 12, 2013. Snow blanketed most regions of Jordan, blocking highways in the south, causing power cuts across the capital and closing down schools and government offices. (Photo by Mohammad Hannon/AP Photo) 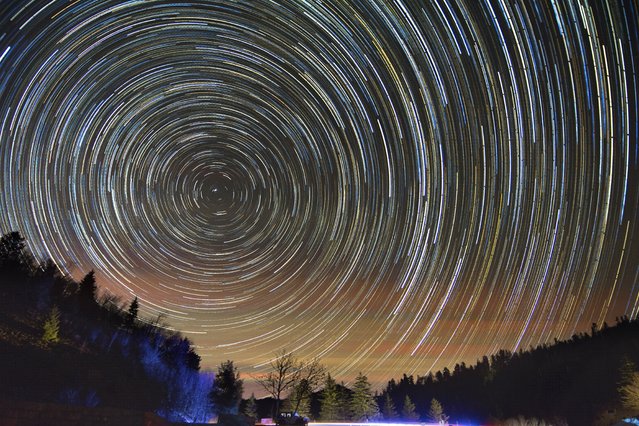 Stars leave trails of light behind as they wheel around Polaris, the North Star, as seen over Newfound Gap in the Great Smoky Mountains National Park on Sunday, December 1, 2013. Far above the light pollution of surrounding areas at a 5,046 feet high, Newfound Gap offers ideal stargazing on clear, moonless nights. This photograph was made by merging hundreds of long exposures, taken over a period of hours to track stars' paths across the autumn night sky. (Photo by Adam Lau/AP Photo/Knoxville News Sentinel) 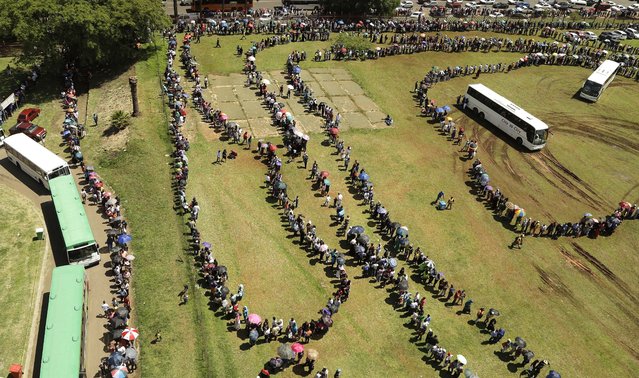 People stand in a long, winding line to catch a bus to see the remains of Nelson Mandela at the Union Buildings in Pretoria, South Africa on Thursday, December 12, 2013. (Photo by Themba Hadebe/AP Photo) 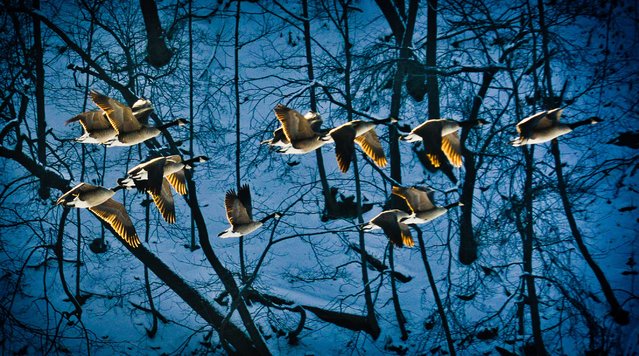 A group of Canada Geese fly over the Mississippi River in Minneapolis on Tuesday, December 10, 2013. Weather permitting, many Canada geese stay in Minnesota throughout the winter months although most migrate south. (Photo by Ben Garvin/AP Photo/The St. Paul Pioneer Press) 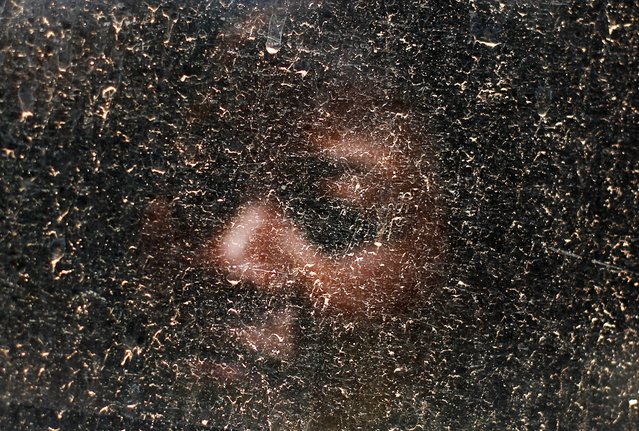 A woman looks out of a dusty window after boarding a bus to be transported to see the casket of Nelson Mandela at the Union Buildings in Pretoria, South Africa, Wednesday December 11, 2013. On Thursday, December 5, 2013, Mandela died at the age of 95. (Photo by Markus Schreiber/AP Photo)
Edit Del
13 Dec 2013 08:21:00, post received 0 comments
Publication archive:
←   →
Popular tags:
All tags
Last searches: