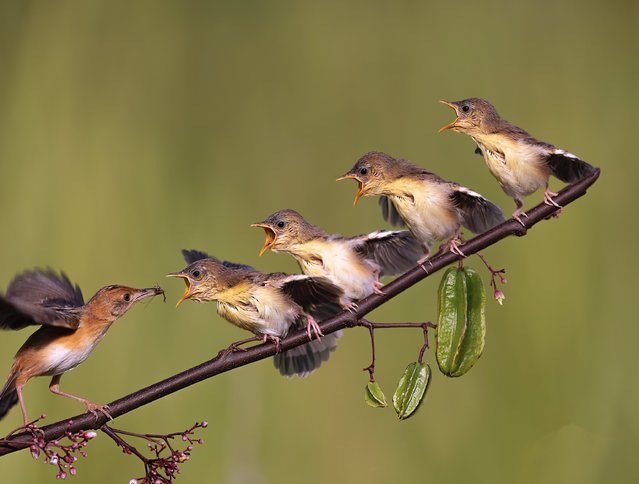 Hungry chicks get in line to be fed their dinner in May 2022. Four young Zitting Cisticola birds were waiting eagerly, on a branch, to be fed by their mum as she returned with food. Lisdiyanto Suhardjo, 60, from Indonesia captured these moments in Jakarta. The chicks are aged around 7-10 days old, they could not yet fly however they were not that far off fledging. (Photo by Lisdiyanto Suhardjo/Solent News) 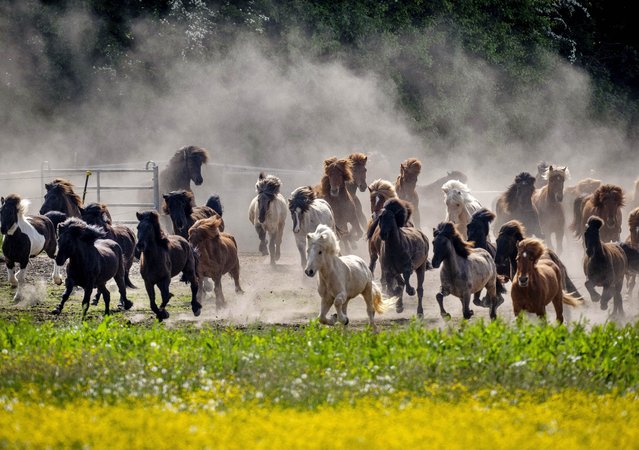 Dust swirls as Icelandic horses are driven to their paddock for the first time in the season in Wehrheim near Frankfurt, Germany, Sunday, May 15, 2022. (Photo by Michael Probst/AP Photo) 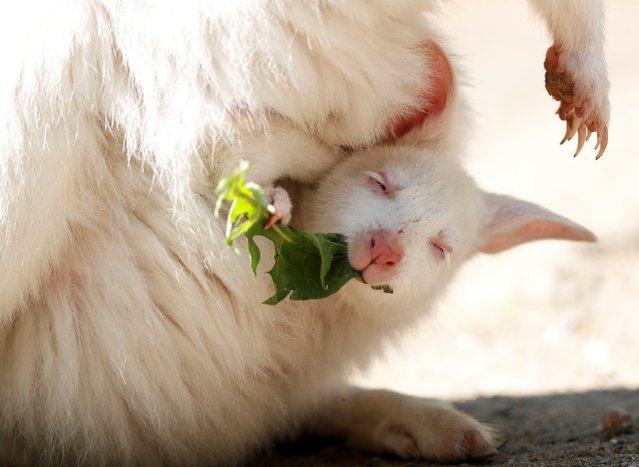 A newly born albino red-necked wallaby joey eats as it is being carried by its mother in their enclosure at the zoo in Decin, Czech Republic, May 18, 2022. (Photo by David W. Cerny/Reuters) 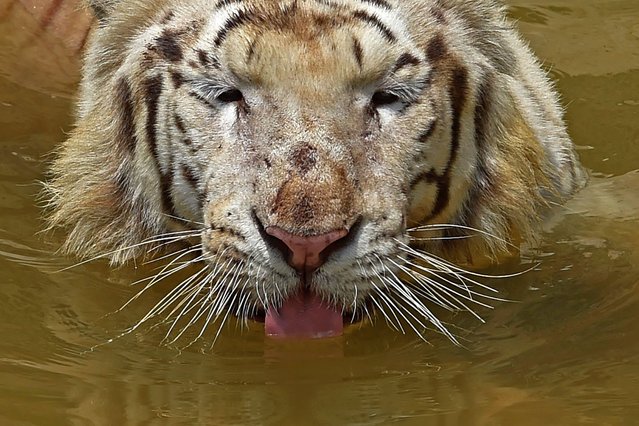 A white tiger swims in a creek inside the enclosure on a hot summer day at a zoo in Lahore, Pakistan on May 9, 2022. (Photo by Arif Ali/AFP Photo) 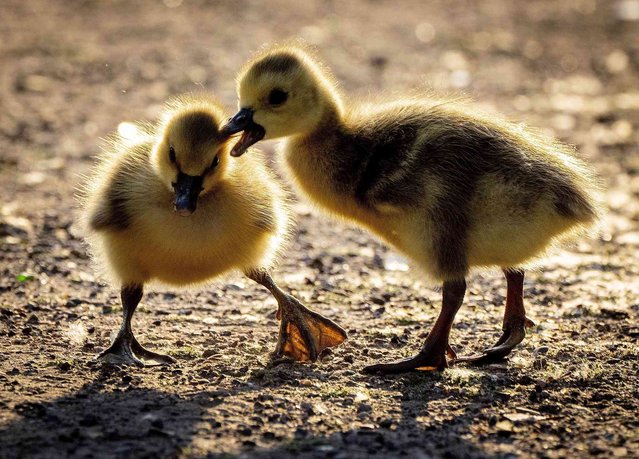 Goslings play at the banks of the river Main in Frankfurt, Germany, Monday, May 9, 2022. (Photo by Michael Probst/AP Photo) 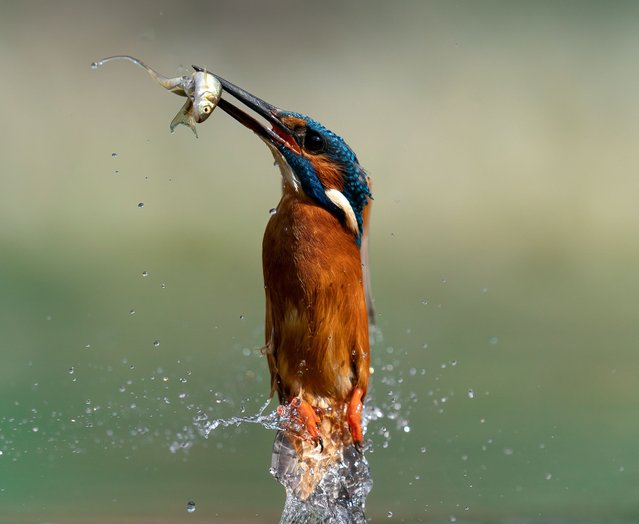 A bright blue kingfisher tosses a fish in its beak on Thursday, May 12, 2022 in Lincolnshire, East Midlands of England. (Photo by Dave Newman/South West News Service) 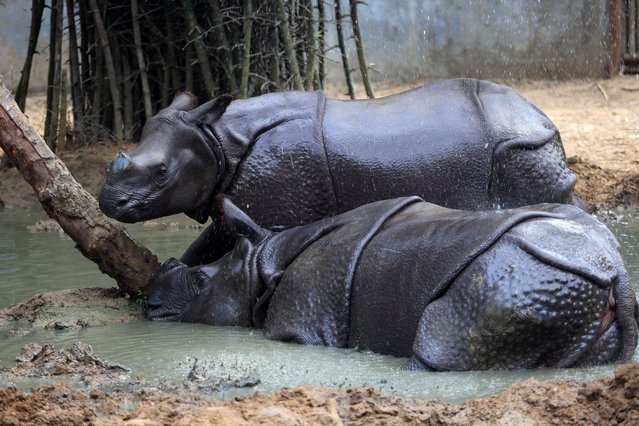 A pair of rhinos cools down in a mud pool beneath a shower on a hot summer day at Arignar Anna Zoological Park in Chennai, India on May 8, 2022. (Photo by Sri Loganathan/ZUMA Press Wire/Rex Features/Shutterstock) 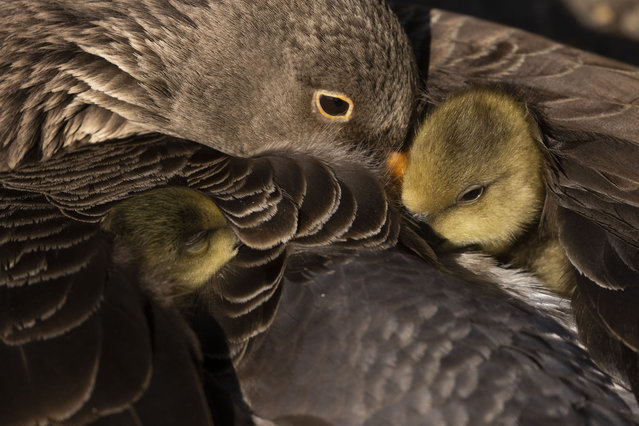 Greylag goose chicks under their parents wings in St James's Park on May 05, 2022 in London, United Kingdom. (Photo by Dan Kitwood/Getty Images) 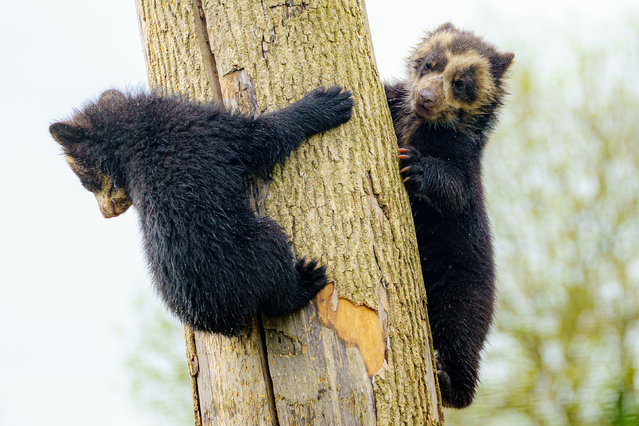 Four-month-old Spectacled bear cub twins begin to come out and play in their enclosure at Noah's Ark Zoo Farm in Somerset on May 10, 2022, where the Andean bears, the only bear species native to South America, are slowly venturing out from their secluded cubbing den to spend more time outdoors with their mother Madidi. (Photo by Ben Birchall/PA Images via Getty Images) 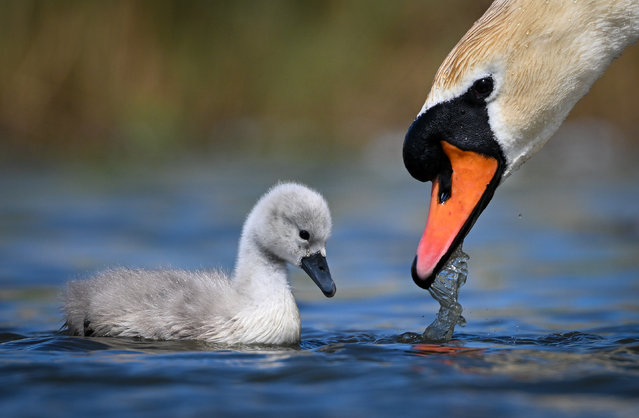 The first cygnets to hatch at Abbotsbury Swannery take to the water, on May 10, 2022 in Abbotsbury, Dorset. The arrival of Mute Swan cygnets is traditionally seen as the start of summer and local traditions claim the Benedictine Monks who owned the swannery between 1000 AD and the 1540s believed the first cygnet signalled the season's first day. Abbotsbury Swannery is the only publicly accessible colony of nesting Mute Swans in the world and can number up to 1,000 per year and are all free-flying. (Photo by Finnbarr Webster/Getty Images) 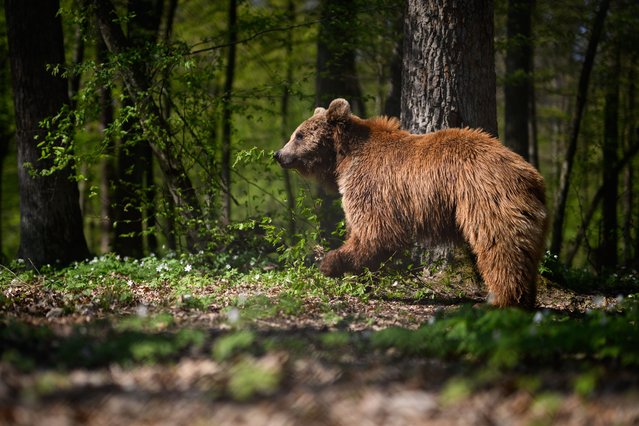 One of the brown bears recently moved from Kyiv wanders around the woodland area of its new home at the Bear Sanctuary Damazhyr on May 06, 2022 in Lviv, Ukraine. As the effects of the Russian invasion of Ukraine spread across the country, Bear Sanctuary Domazhyr took in seven bears from the White Rock Bear Shelter near Kyiv which is run by the Four Paws partner organisation “Save Wild Fund”, in an emergency transfer. Three of the bears have since been moved on to bear sanctuaries in Germany but four remain. Opened in 2017, the Four Paws Domazhyr sanctuary now has over 20 hectares of land, with room for up to 32 rescue bears. (Photo by Leon Neal/Getty Images) 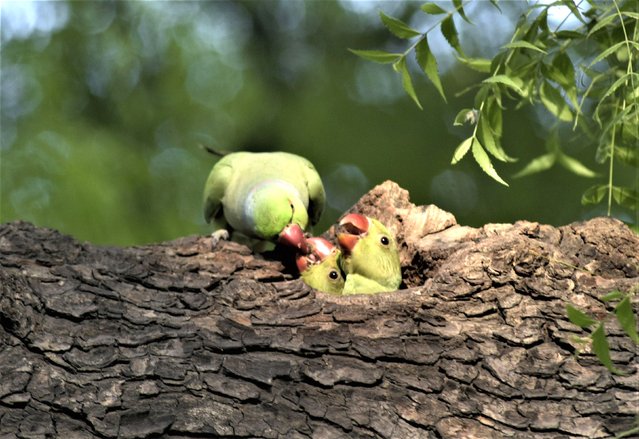 A parrot feeds its chicks on a nest in a tree in New Delhi India on May 08,2022. (Photo by Imtiyaz Khan/Anadolu Agency via Getty Images) 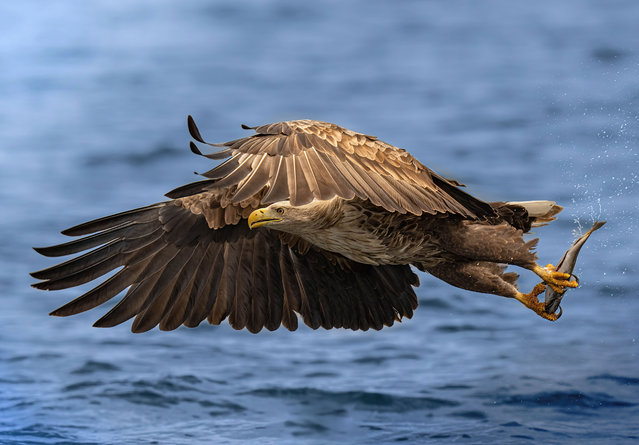 A white tailed eagle catches fish from Loch Na Keal on the Isle of Mull, Scotland on May 11, 2022. (Photo by Mike Phelps/Animal News Agency) 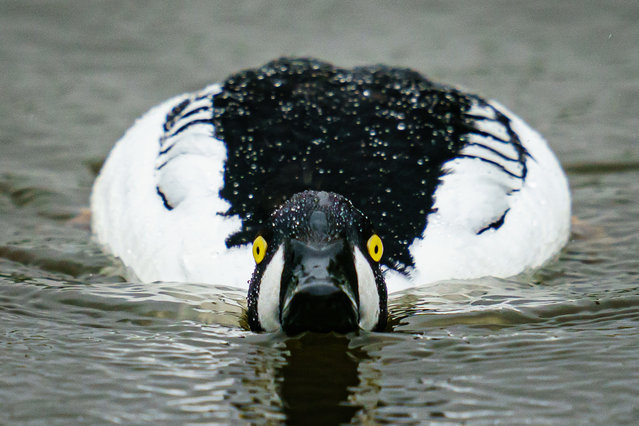 A Goldeneye swims in the rain at Slimbridge wetlands, Gloucestershire on Wednesday, May 11, 2022. (Photo by Ben Birchall/PA Images via Getty Images) 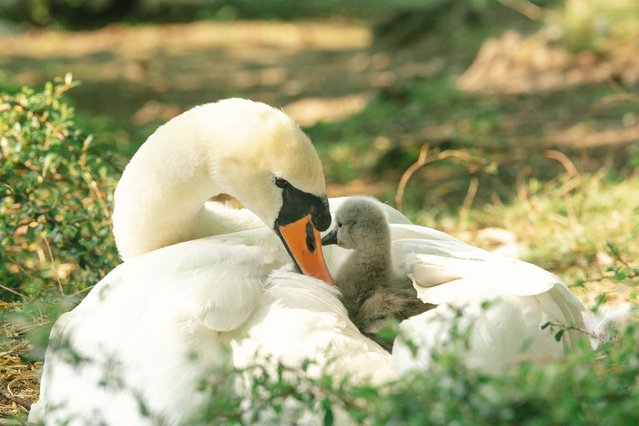 The baby swan is seen with mother swan resting on the bank of lake in Hiroshima Nagasaki park in Cologne, Germmany on May 5, 2022. (Photo by Ying Tang/NurPhoto via Getty Images) 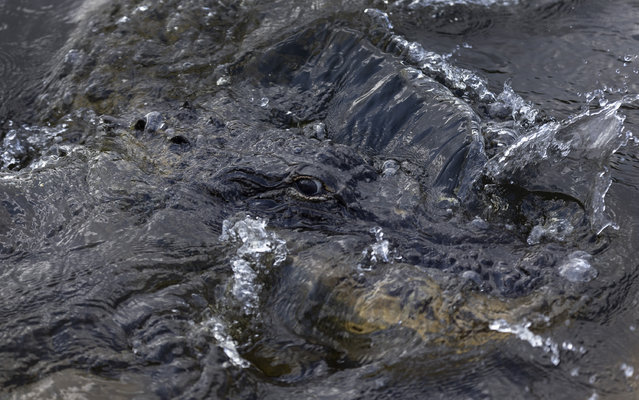 The eye of an alligator pokes above the water line as it swims in the Florida Everglades on May 04, 2022 in Miami, Florida. Alligator hunters who are preparing for the upcoming season, which begins in August and runs until November 1, will be able to hunt 24 hours a day after the Florida Fish and Wildlife Conservation Commission approved the extension of daily gator hunting hours. (Photo by Joe Raedle/Getty Images) 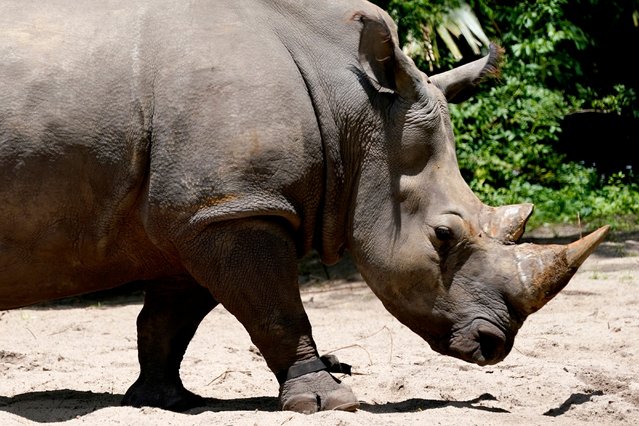 Helen, a 30-year-old white rhino, wears a fitness device on her right front leg as she walks around on the savanna at Walt Disney World's Animal Kingdom theme park, Monday, May 16, 2022, in Lake Buena Vista, Fla. The purpose of the fitness device is to gather data on the number of steps she takes each day, whether she is walking, running or napping, and which part of the man-made savanna she favors the most. (Photo by John Raoux/AP Photo) 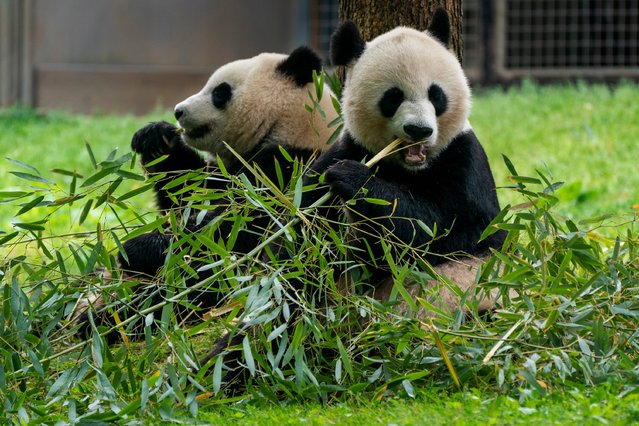 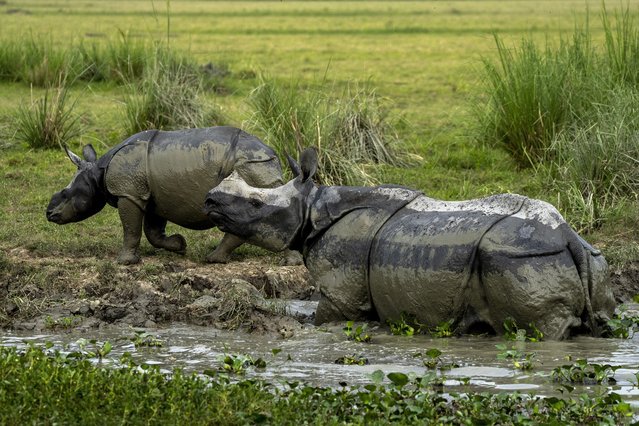 A mother and calf one-horned rhinoceros at the Pobitora Wildlife Sanctuary on the outskirts of Gauhati, India on May 7, 2022. The sanctuary is known for its Indian one-horned rhino population. (Photo by Anupam Nath/AP Photo) 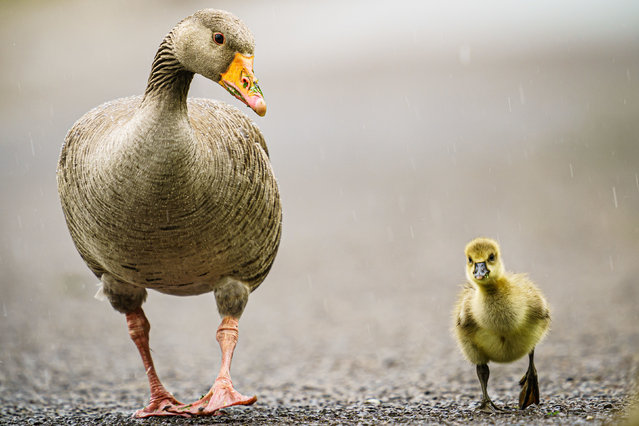 Mum has a watchful eye on a young Greylake gosling as it waddles around in the rain at Slimbridge wetlands, Gloucestershire on Wednesday, May 11, 2022. (Photo by Ben Birchall/PA Images via Getty Images)
Edit Del
22 May 2022 04:29:00, post received 0 comments
Publication archive:
←   →
Popular tags:
All tags
Last searches: