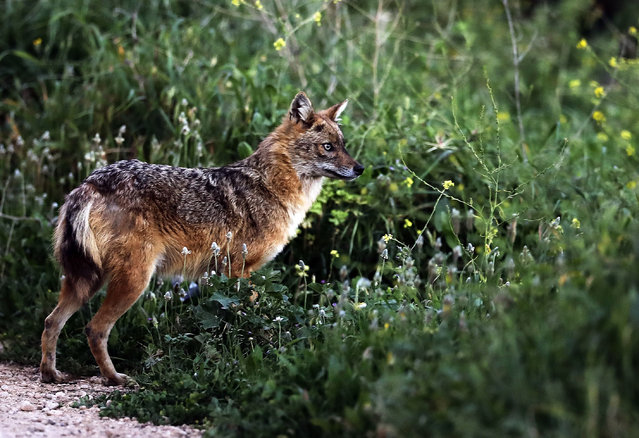 A Golden Jackal (Canis aureus) is seen in a field in the village of Kfifane, north of Beirut, on March 26, 2018. Golden jackals strongly resemble wolves but they are much smaller. They are mostly nocturnal and known to be opportunistic feeders. (Photo by Joseph Eid/AFP Photo) 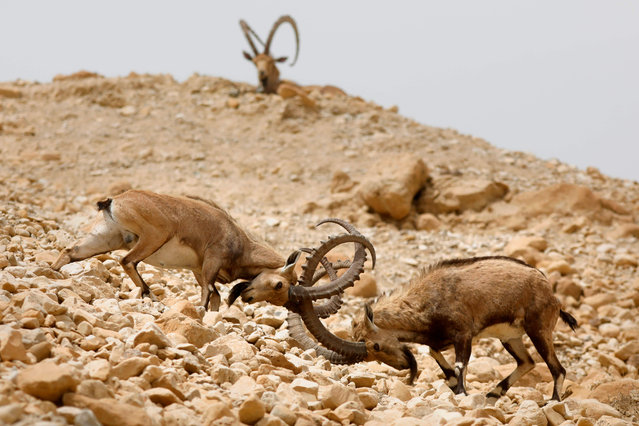 Ibexes fight each others during the species' Estrous cycle in the Ein Gedi nature reserve along the Dead sea in the Judean Desert on March 24, 2018. (Photo by Menahem Kahana/AFP Photo) 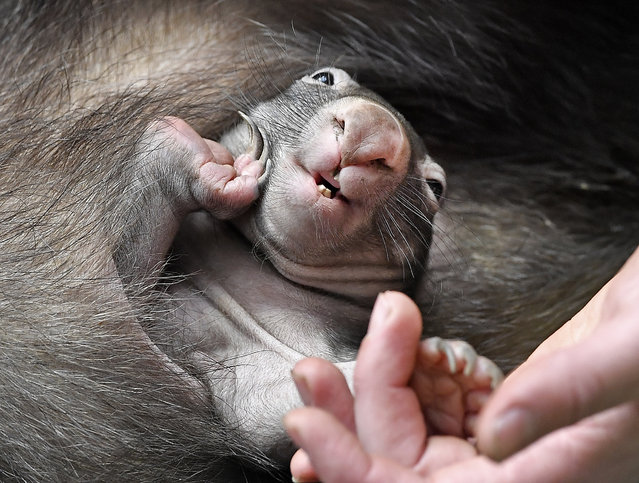 The little new born wombat baby APARI sitting in its mothers pouch at the zoo in Duisburg, Germany, Thursday, March 29, 2018. Wombat mother TINSEL once was found in the pouch of its dead mother on a street in Australia and was raised by zookeepers before she came to Germany. The zoo tried for 40 years in vain to breed a wombat, until APARI was born as the first one last week. (Photo by Martin Meissner/AP Photo) 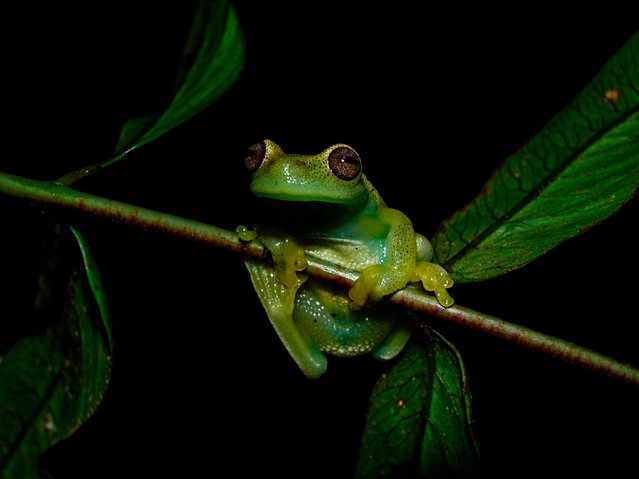 This handout picture released on March 27, 2018 by La Salle Natural History Museum of Venezuela shows a Hyloscirtus Japreria frog at its habitat in the Perija slopes, Zulia state, Venezuela near the border with Colombia Scientists from Venezuela and Colombia identified a new species of frog in the Sierra de Perija, a vast mountain range that both countries share and that hosts endemic species such as this small amphibian. (Photo by Fernando Rojas-Runjaic/AFP Photo/La Salle Natural History Museum of Venezuela) 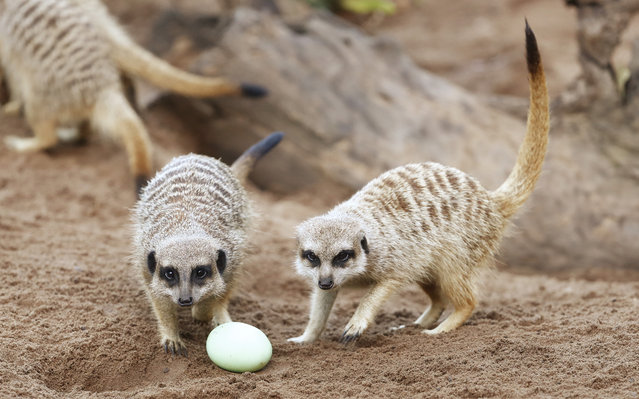 Meerkats play with Easter treats at Taronga zoo in Sydney, Australia on March 29, 2018. Keepers and animal behaviourists have offered Easter-themed treats and enrichment to several animals. (Photo by Daniel Munoz/AAP) 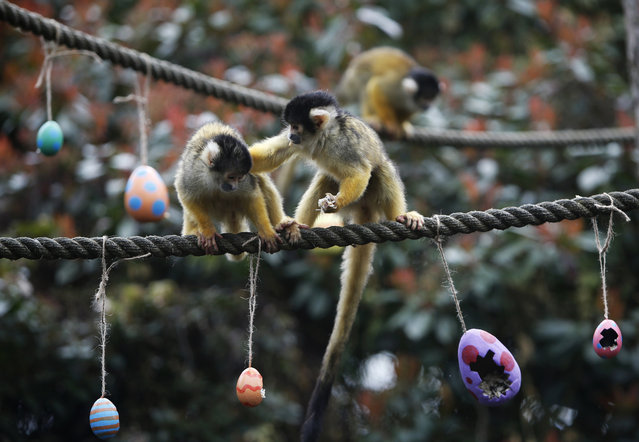 A squirrel monkey, right, pushes his mate away as he eats a treat of worms and seeds from a papier mache Easter eggs, at London Zoo in London, Thursday, March 29, 2018. The zoo traditional feeds selected animals treats to encourage visitors to the zoo over the Easter holidays. (Photo by Alastair Grant/AP Photo) 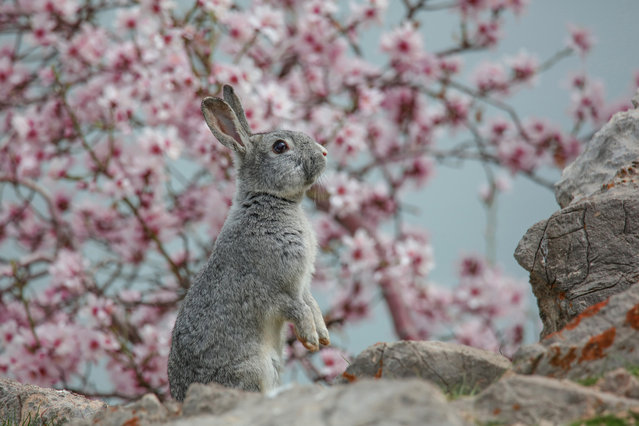 A rabbit is seen in front of the almond tree blossoms at Akdamar island in Lake Van during spring time in Turkey's Van province on March 29, 2018. Dozens of animal species that live in the island and almond tree blossoms become a tourist attractions as spring comes to Van district of Turkey. (Photo by Ali Ihsan Ozturk/Anadolu Agency/Getty Images) 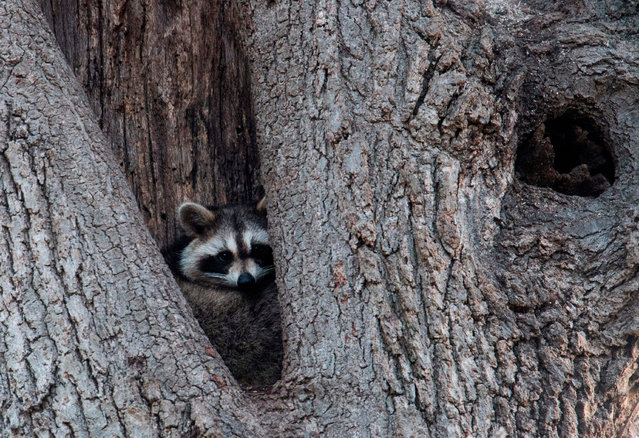 A raccoon rests in the hollow of a tree March 16, 2018 near Orchard Beach in New York. From coyotes in the Bronx to red foxes in Queens, raccoons in Manhattan, owls in Brooklyn and deer in Staten Island, wildlife roams the urban jungle of New York. But coexistence is not always easy between millions of wild animals and 8.5 million humans. (Photo by Don Emmert/AFP Photo) 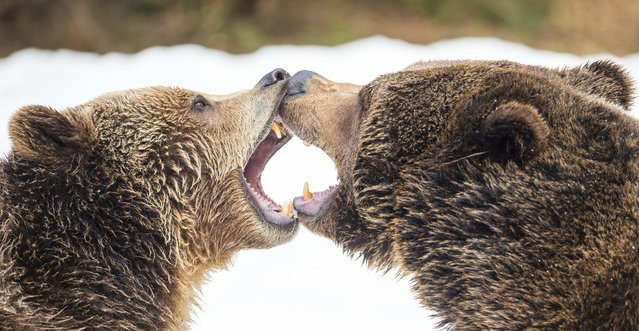 Two brown bears fight in the animal ground Neuschoenau and open up their mouths on March 24, 2018 in Neuschönau, Germany. (Photo by Lino Mirgeler/AP Photo) 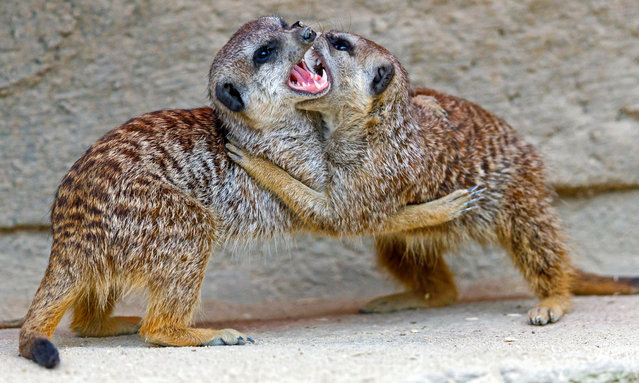 Adult meerkats (Suricata suricatta) play at the zoo Wilhelma in Stuttgart, Germany, 26 March 2018. According to Zoo Wilhelma, at the meerkats were born in January 2018 triplets. (Photo by Ronald Wittek/EPA/EFE) 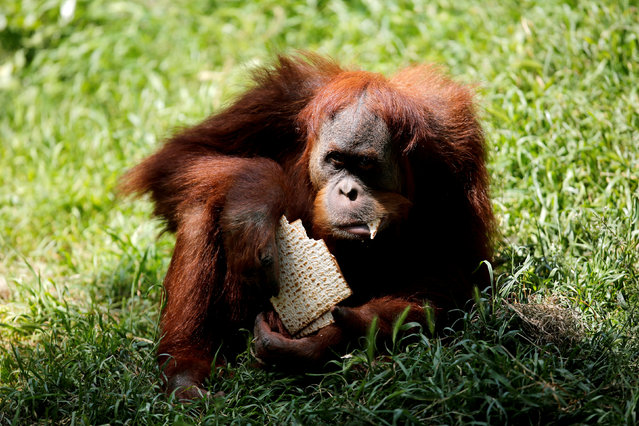 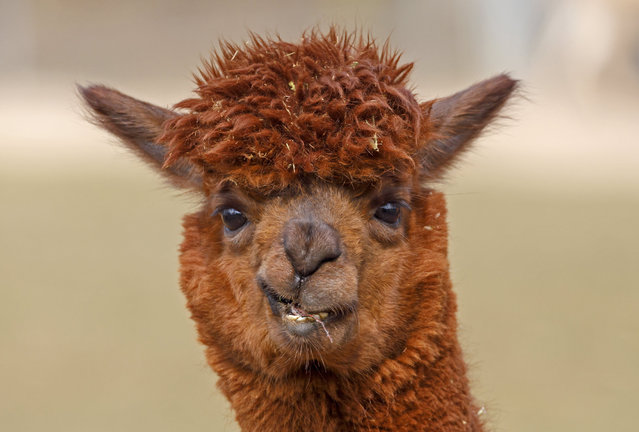