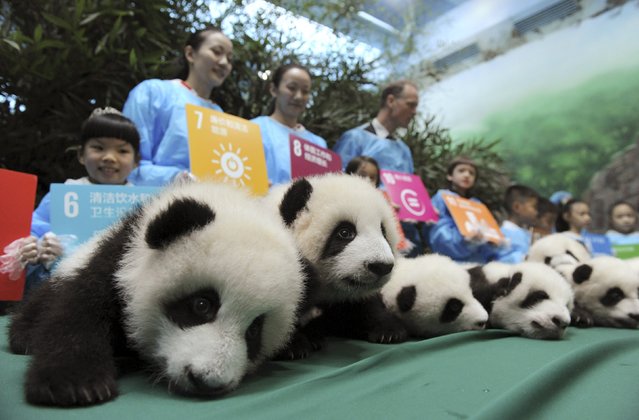 Giant panda cubs, which were born in 2015, are seen on display next to participants holding placards with their goals and wishes for the United Nations in the future, during a celebration to mark the 70th anniversary of the United Nations, at the Chengdu Research Base of Giant Panda Breeding in Chengdu, Sichuan province, China, October 24, 2015. A total of 13 giant panda cubs, including six pairs of twins, which were born in 2015 at the centre, were showed to their fans during the event on Saturday, local media reported. (Photo by Reuters/China Daily) 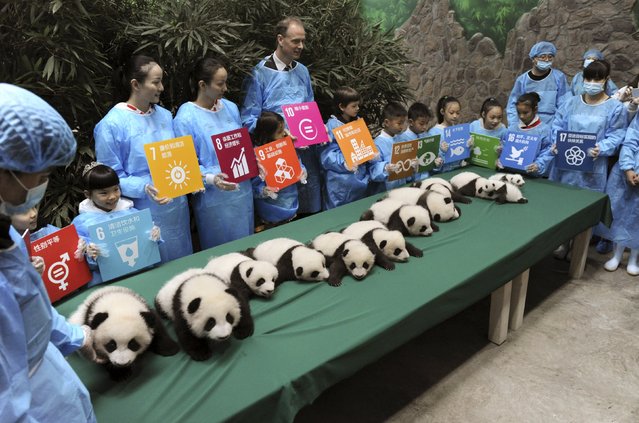 Giant panda cubs, which were born in 2015, are seen on display next to participants holding placards with their goals and wishes for the United Nations in the future, during a celebration to mark the 70th anniversary of the United Nations, at the Chengdu Research Base of Giant Panda Breeding in Chengdu, Sichuan province, China, October 24, 2015. (Photo by Reuters/China Daily) 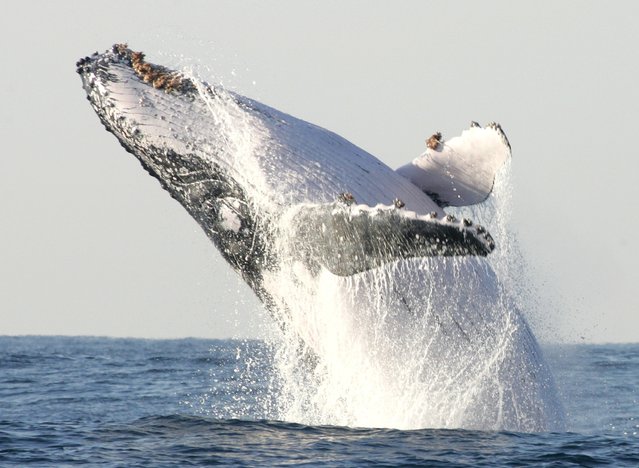 A humpback whale breaches off South Africa's Kwa-Zulu Natal South Coast, in this file photo taken July 9, 2004. A study unveiled on Monday showed that the extinction or precipitous population declines of large land and sea mammals has deprived ecosystems of a vital source of fertilization in their dung, urine and, after death, decomposing bodies. (Photo by Mike Hutchings/Reuters) 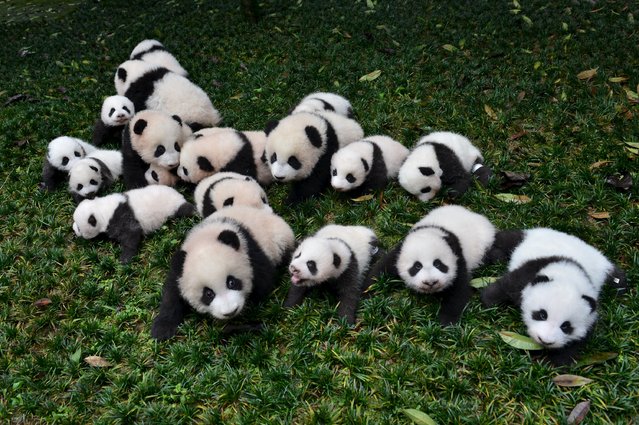 Baby pandas born in 2015 are placed on grass for pictures during a photo opportunity at a giant panda breeding centre in Ya'an, Sichuan province, China, October 24, 2015. About 18 pandas born in 2015 were shown to media at the centre last Saturday. (Photo by Reuters/Stringer) 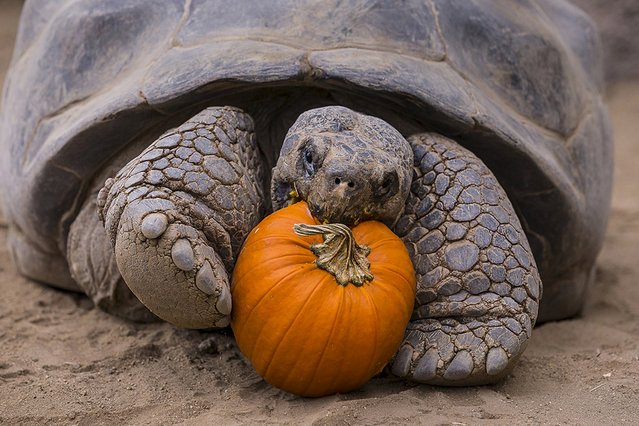 The San Diego Zoo's oldest resident, Galapagos tortoise Grandma who is estimated to be about 130 to 140 years old, celebrates Halloween with a pumpkin breakfast in San Diego, California in this October 28, 2015 handout photo. Galapagos tortoises are the giants of the tortoise world, with males weighing more than 500 pounds and females weighing an average of 250 pounds. The San Diego Zoo currently has 13 tortoises. (Photo by Ken Bohn/Reuters/San Diego Zoo) 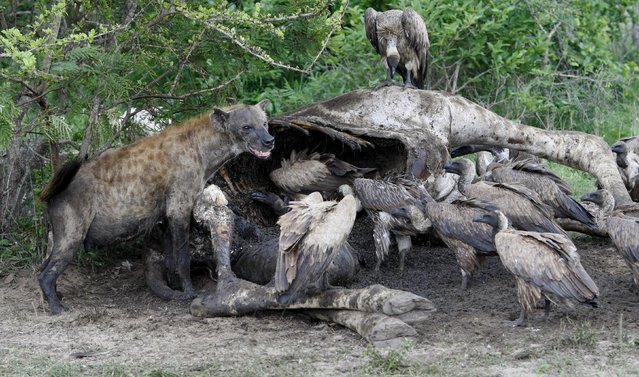 A hyena and a group of vultures feed on the carcass of a giraffe killed by lions in South Africa's Kruger National Park, in this December 14, 2009 file picture. Africa's vultures are in serious decline, according to a report released on October 29, 2015, a situation that could impact human health and livestock as populations of other scavengers such as rats and jackals could rise as a result. The assessment, carried out by conservation group BirdLife International, found that six of Africa's 11 vulture species were at risk of extinction. (Photo by Mike Hutchings/Reuters) 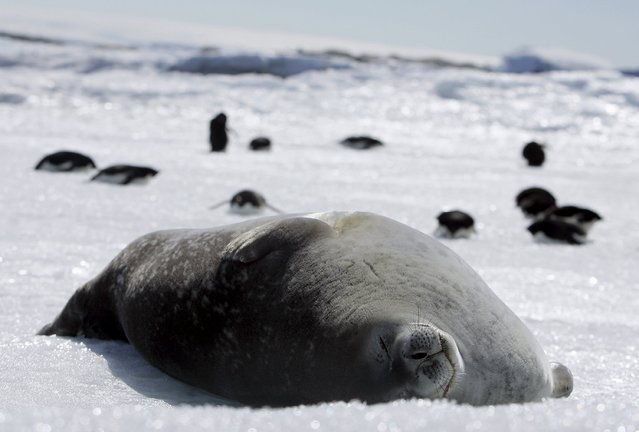 A Weddell seal lies atop ice at Cape Denison, Commonwealth Bay, East Antarctica in this January 1, 2010 file photo. Russia has again thwarted attempts to create the world’s largest ocean sanctuary in Antarctica, the final country opposing the protection of a vast swathe of rich waters from fishing after a revised international plan won support from China. The Commission for the Conservation of Antarctic Marine Living Resources (CCAMLR) is winding up a 10-day meeting in Hobart, Australia on October 30, 2015 without the consensus needed for a deal to conserve and manage the marine ecosystems in the Southern Ocean. While Russia blocked conservation proposals for a fifth consecutive time, delegates welcomed China's support for the revised Marine Protection Area (MPA) in the icy but fertile Ross Sea put forward by the United States and New Zealand. (Photo by Pauline Askin/Reuters) 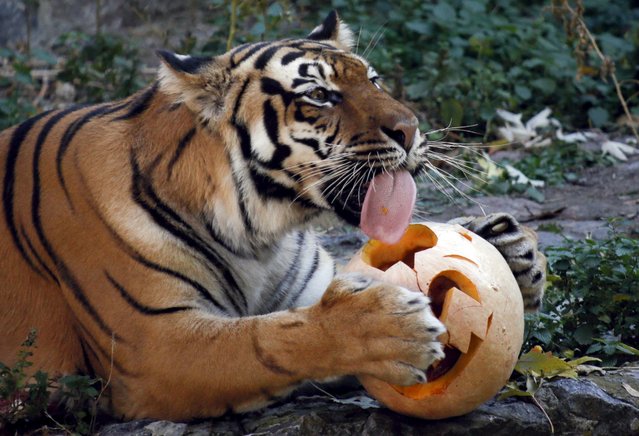 A tiger eats a pumpkin during Halloween celebrations at a zoo in Kiev, Ukraine, October 30, 2015. (Photo by Valentyn Ogirenko/Reuters) 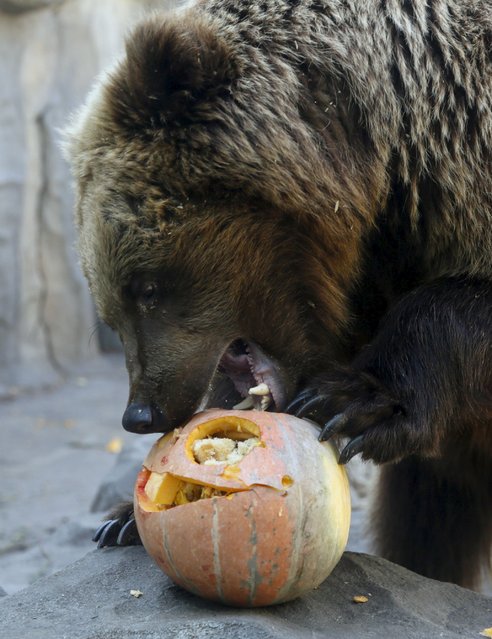 A bear eats a pumpkin during Halloween celebrations at a zoo in Kiev, Ukraine, October 30, 2015. (Photo by Valentyn Ogirenko/Reuters) 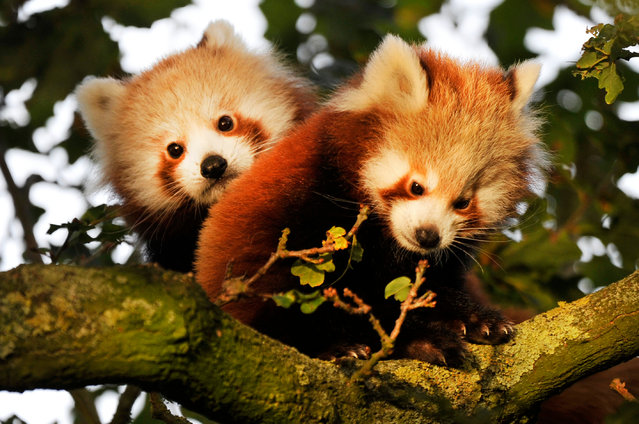 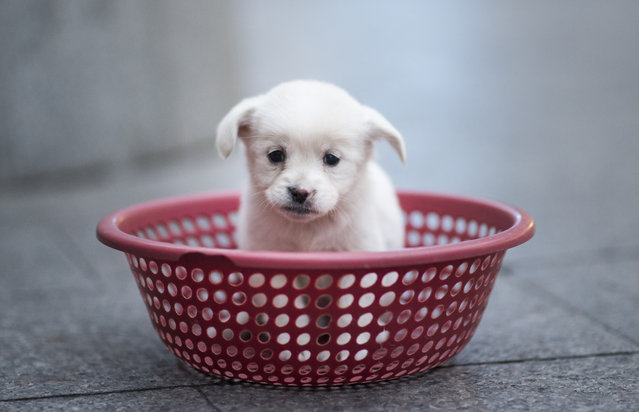 A puppy sits in a plastic strainer, waiting to be sold by its owner, in front of a subway station in downtown Shanghai on October 28, 2015. The owner sold four puppies each selling for 100 yuan (15.73 USD). (Photo by Johannes Eisele/AFP Photo) 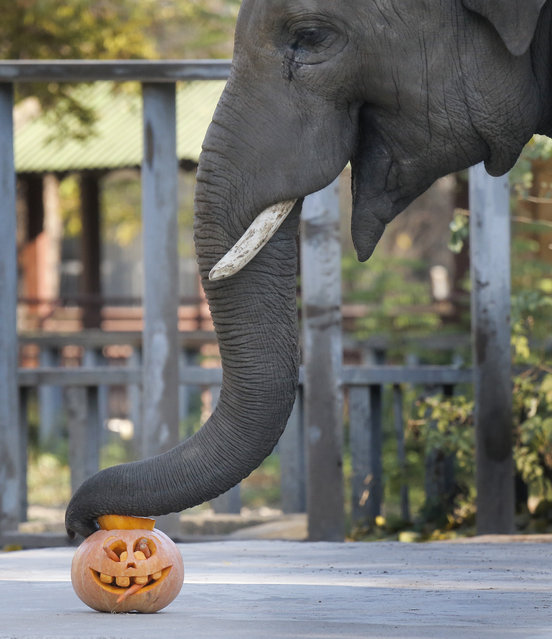 A elephant investigates a Halloween lantern at the Zoo in Kiev, Ukraine, Thursday, October 29, 2015. The zoo hid food in the lanterns made from pumpkins, to many animals as the zoo marks Halloween. (Photo by Efrem Lukatsky/AP Photo) 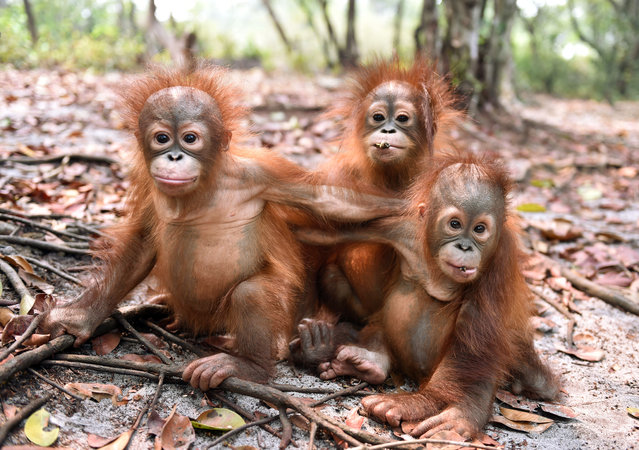 This handout picture taken and released by the Borneo Orangutan Survival Foundation (BOSF) on October 26, 2015 shows baby orangutans, which had previously suffered from respiratory problems, playing at a nursery in the rehabilitation centre operated by the BOSF on the outskirts of Palangkaraya in Central Kalimantan. Endangered orangutans are falling victim to a devastating haze crisis that has left them sick, malnourished and severely traumatised as fires rage through Indonesia's forests, reducing their habitat to a charred wasteland. (Photo by AFP Photo/Borneo Orangutan Survival Foundation/Indrayana) 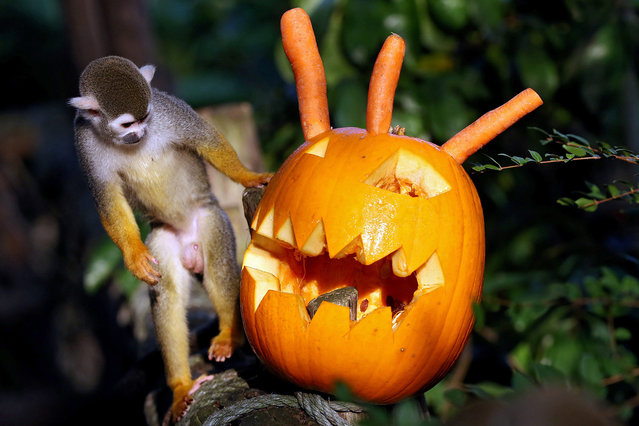 A squirrel monkey approaches on a carved pumpkin in the Zoo in Leipzig, Germany, 28 October 2015. Zoo staff have their animals brings a sweet surprise on the eve of Halloween entertainment. In this case, raisins were hidden in horror head. (Photo by Jan Woitas/EPA) 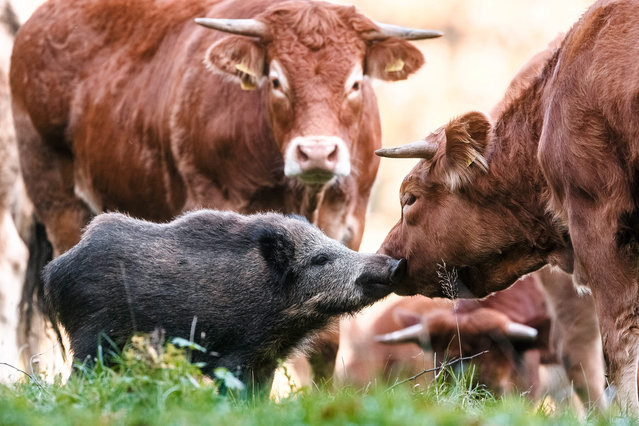 A young wild boar stands amidst cattle in Moerel, Germany, 28 October 2015. The wild boar was accepted by the cattle herd as part of it. (Photo by Markus Scholz/EPA) 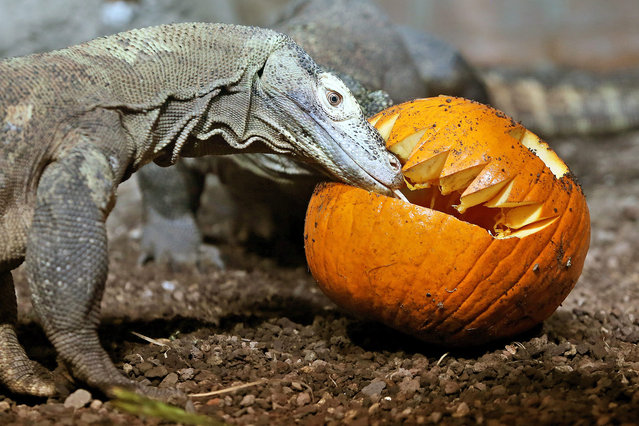 A Komodo dragon approaches on a carved pumpkin in the Zoo in Leipzig, Germany, 28 October 2015. (Photo by Jan Woitas/EPA) 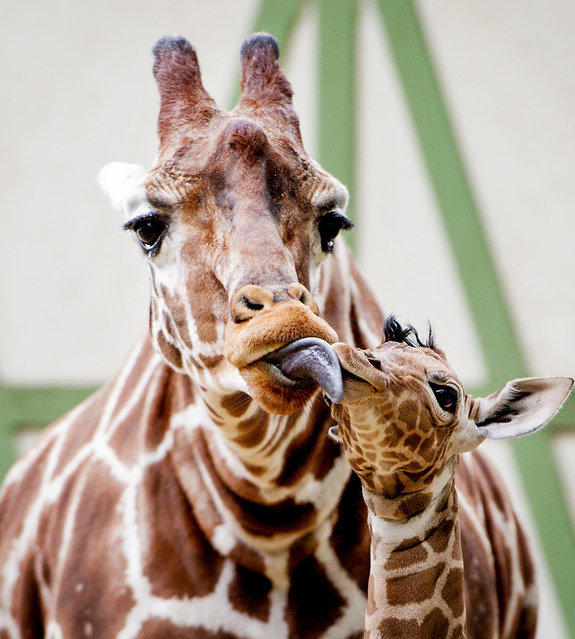 A baby giraffe cuddles with its mother as it explores their outdoor enclosure for the first time in the Artis Royal Zoo in Amsterdam, The Netherlands, October 22, 2015. (Photo by Robin van Lonkhuijsen/AFP Photo/ANP) 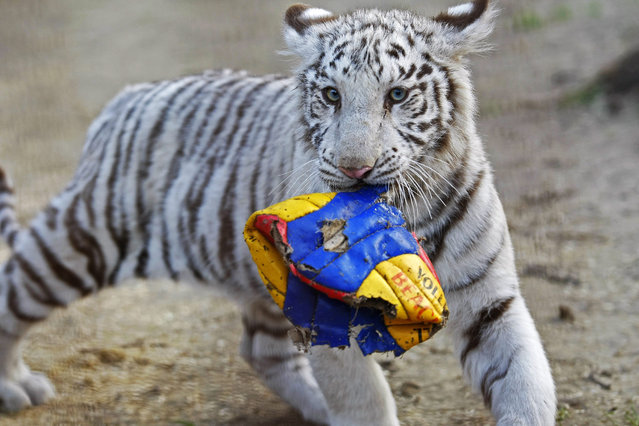 A white Bengal tiger cub is seen in her enclosure at a private zoo in Felsolajos some 80 kms south of Budapest, Hungary, Monday, October 26, 2015. The zoo's two female cubs, were born in May. (Photo by Janos Bugany/MTI via AP Photo) 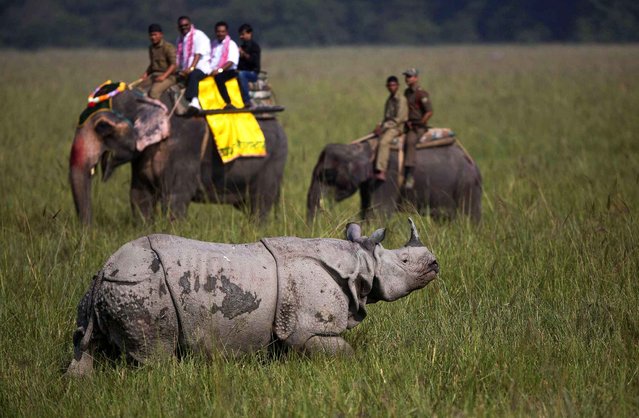 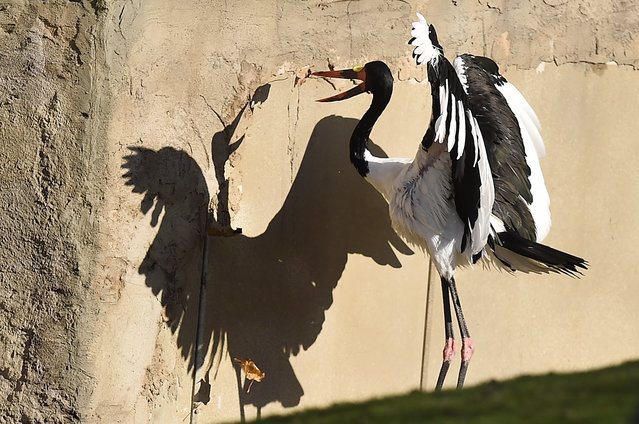