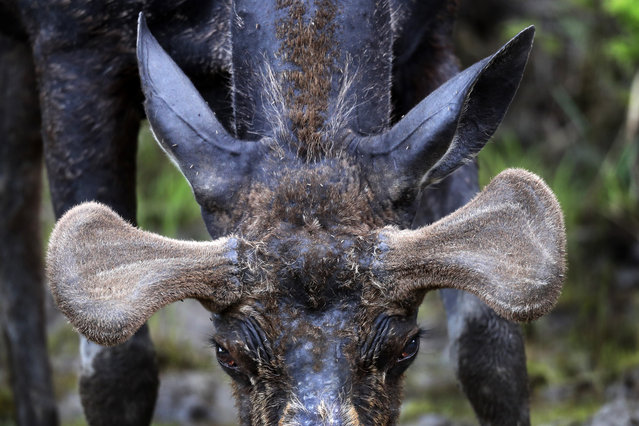 Velvet covers the growing antlers of a bull moose seen feeding at the Umbagog Wildlife Refuge, Thursday, May 31, 2018, in Wentworth's Location, N.H. The antlers will continue to grow through autumn. The largest antler spread for a moose taken by hunter in New Hampshire was 68.5 inches. (Photo by Robert F. Bukaty/AP Photo) 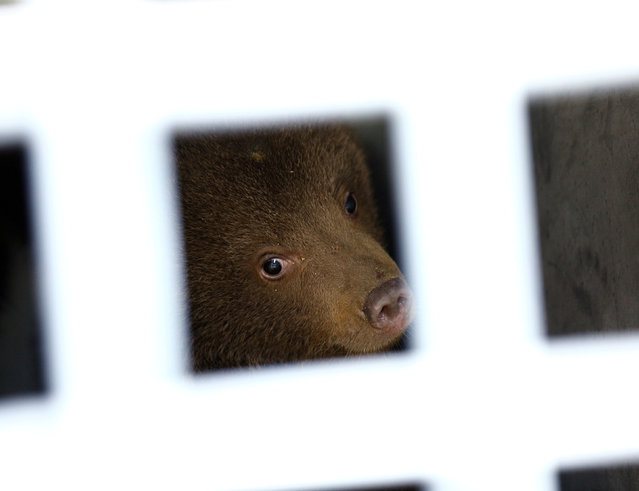 One of the three bear cubs who were found by the Bulgarian authorities in the wild and rescued at the Dancing Bears Park is pictured inside a bus near Belitsa, Bulgaria, May 23, 2018, before their relocation to a bear orphan station in Greece. (Photo by Stoyan Nenov/Reuters) 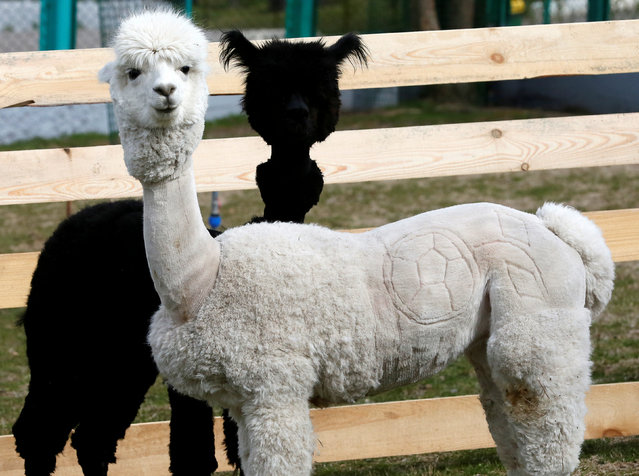 Female alpaca Juliette with a haircut depicting a soccer ball into its fur made by zoo keepers for the upcoming 2018 FIFA World Cup, stands in front of male alpaca Romeo inside an open-air enclosure at the Royev Ruchey zoo in the suburb of Krasnoyarsk, Russia May 18, 2018. (Photo by Ilya Naymushin/Reuters) 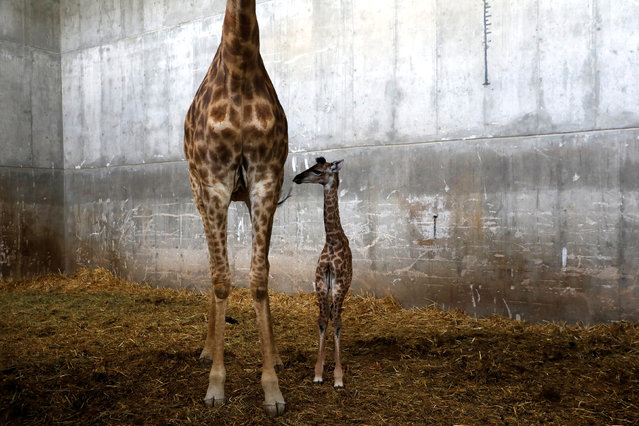 Toy, a 10-day-old female giraffe named after Israeli singer Netta Barzilai's song “Toy”, winner of the 2018 Eurovision Song Contest, is seen with its mother Laila in their pen at Jerusalem's Biblical Zoo, May 21, 2018. (Photo by Ronen Zvulun/Reuters) 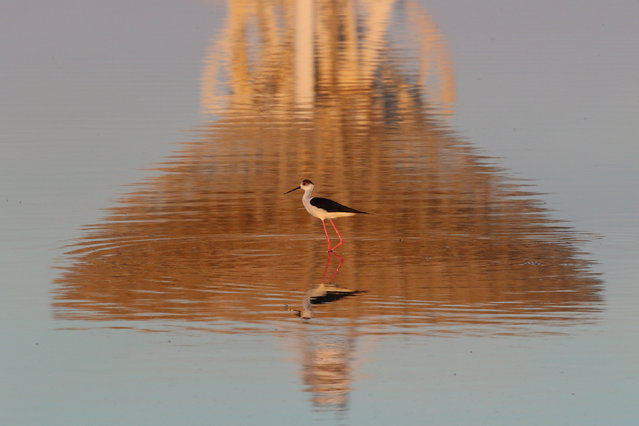 A black-winged stilt walks as the RT-70 radio telescope is reflected in the Galgasskoye lake near the village of Molochnoye, Crimea May 22, 2018. (Photo by Pavel Rebrov/Reuters) 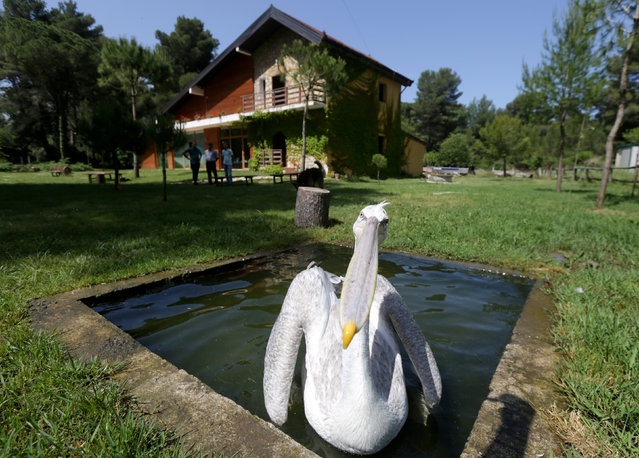 John Malko, a Dalmatian Pelican (Pelecanus crispus) looks at the camera in the visitor's centre of the Divjake-Karavasta National Park in Divjaka, Albania May 21, 2018. (Photo by Florion Goga/Reuters) 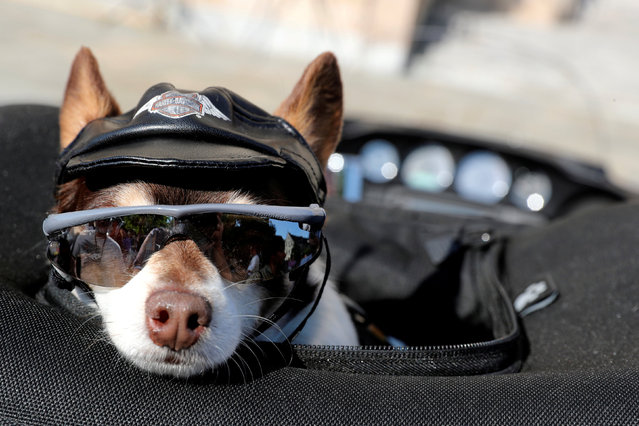 Daniel the chihuahua sits in his owner Kurt Gould's motorcycle as Rolling Thunder riders, who converge annually on Memorial Day in support of U.S. military veterans, have their bikes blessed during a brief service at the National Cathedral in Washington, U.S. May 25, 2018. (Photo by Jonathan Ernst/Reuters) 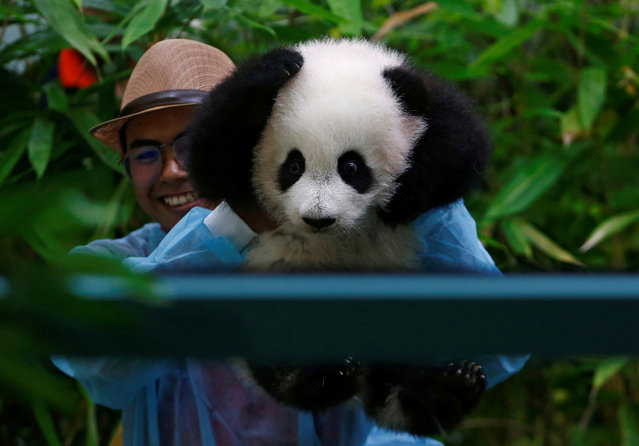 A zoo employee carries the four-month-old female giant panda cub, born to mother Liang Liang and father Xing Xing, on display to the public for the first time at the National Zoo in Kuala Lumpur, Malaysia May 26, 2018. (Photo by Lai Seng Sin/Reuters) 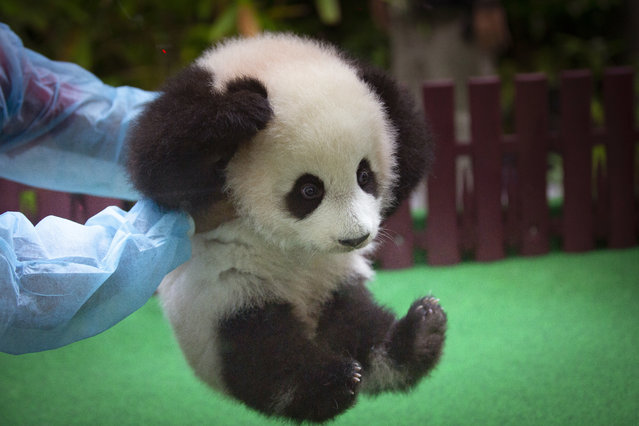 A zoo worker plays with a new baby panda at Malaysia Zoo in Kuala Lumpur, Malaysia Saturday, May 26, 2018. The baby panda born in a Malaysian zoo five months ago has made her first media appearance. The female panda, which has not yet been named, is the second offspring of giant pandas Liang Liang and Xing Xing, both of which are on a 10-year loan to Malaysia since 2014. (Photo by Vincent Thian/AP Photo) 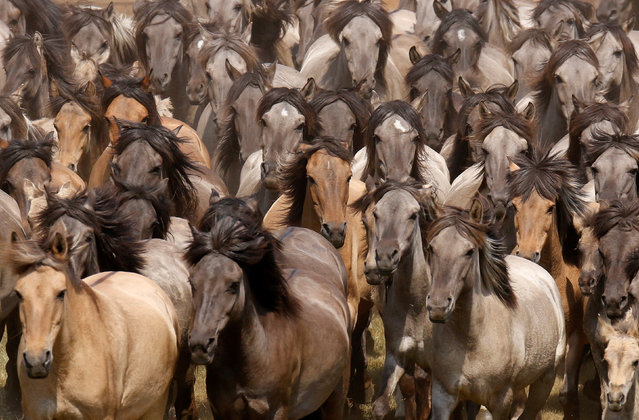 Horses are seen during a wild horse show event in Duelmen, Germany, May 26, 2018. (Photo by Leon Kuegeler/Reuters) 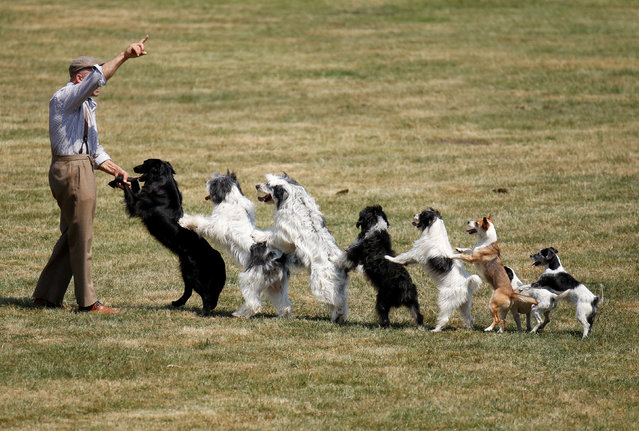 A man and his dogs perform a stunt before a wild horse show event in Duelmen, Germany, May 26, 2018. (Photo by Leon Kuegeler/Reuters) 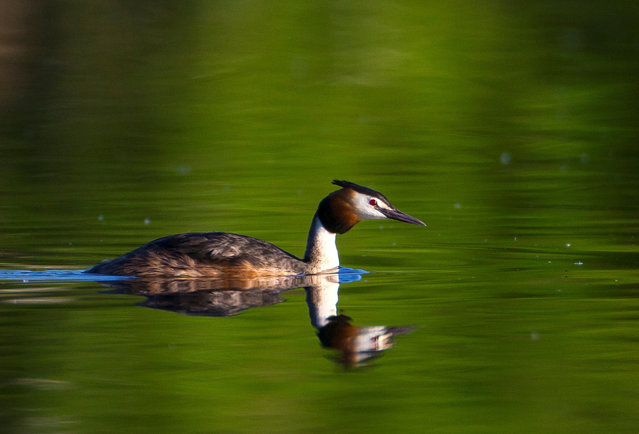 A great crested grebe swims in a lake near the the town of Vileika, Belarus May 27, 2018. (Photo by Vasily Fedosenko/Reuters) 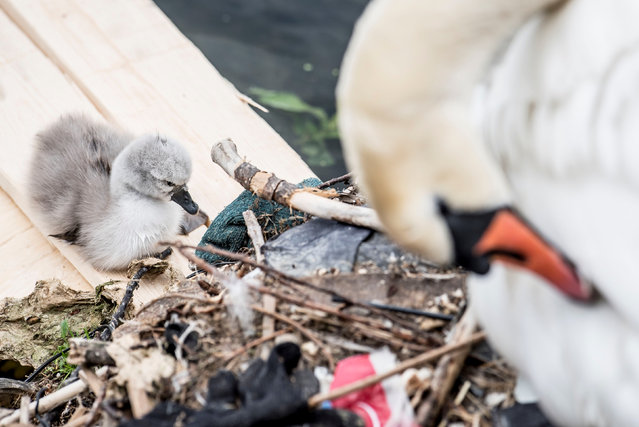 Swan and its cygnet are seen in the nest made partly of rubbish from the lake near Queen Louise's Bridge in Copenhagen, Denmark on May 28, 2018. (Photo by Mads Claus Rasmussen/Reuters/Ritzau Scanpix) 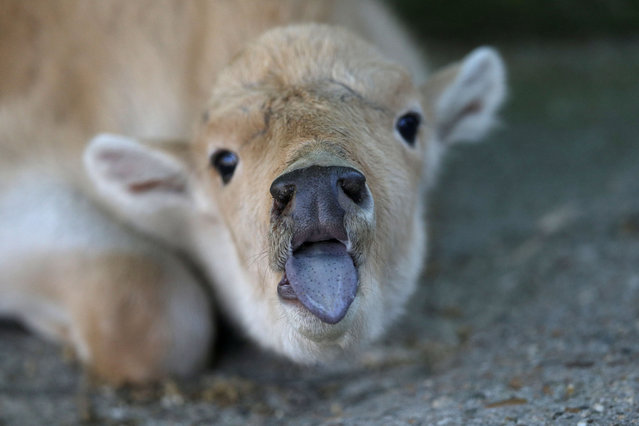 A recently born rare white bison is seen in a zoo in Belgrade, Serbia May 31, 2018. (Photo by Djordje Kojadinovic/Reuters) 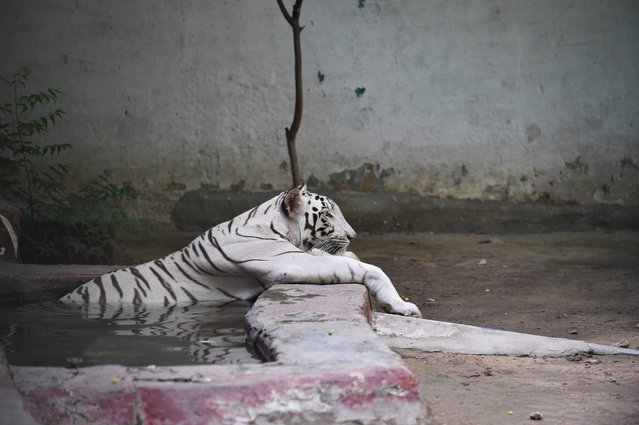 An Indian white tigress takes sit a pond in a enclosure during a hot day at the Kamla Nehru Zoological Park in Ahmedabad on May 26, 2018. (Photo by Sam Panthaky/AFP Photo) 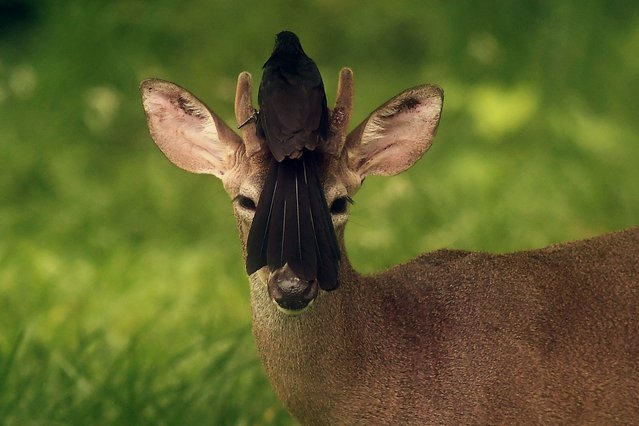 A bird rests on the head of a white-tailed deer roaming free in San Jose Villanueva, 25 km southwest of San Salvador, on May 21, 2018. (Photo by Marvin Recinos/AFP Photo) 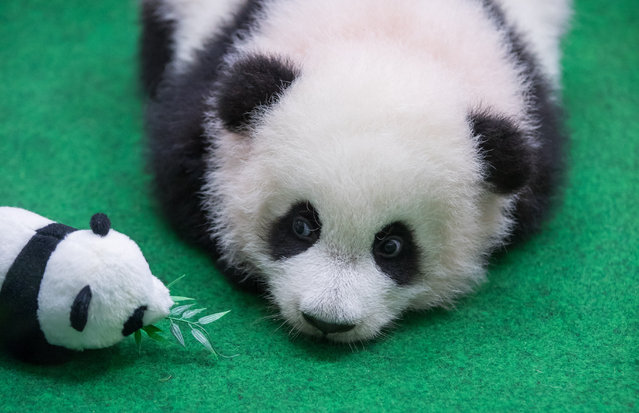 A female panda cub keeps an eye on her stuffed toy companion as she makes her public debut in Kuala Lumpur, Malaysia on May 26, 2018. (Photo by Xinhua News Agency/Rex Features/Shutterstock) 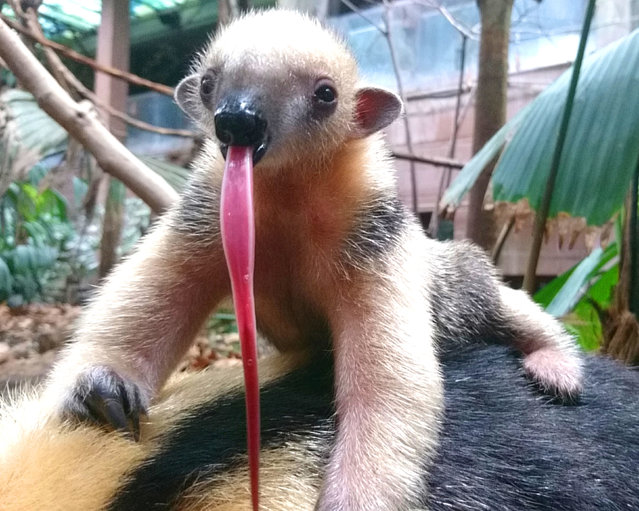 A baby tamandua, or anteater, named Poco sticks out its tongue on May 31, 2018. ZSL London Zoo is celebrating the creature’s surprise birth after they found a male to be the companion of its mother Ria last October. (Photo by ZSL London Zoo/PA Wire)
Edit Del
03 Jun 2018 00:03:00, post received 0 comments
Publication archive:
←   →
Popular tags:
All tags
Last searches: