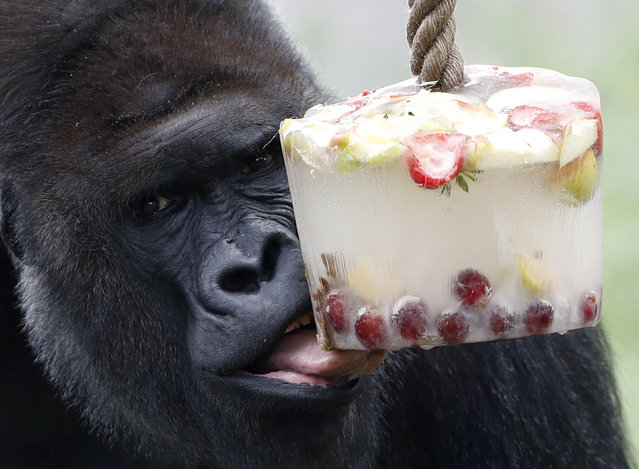 Western lowland gorilla Kijivu liks an ice block with fruits for the gorillas to cool down during a hot weather day at the Zoo in Prague, Czech Republic, Thursday, June 6, 2019. (Photo by Petr David Josek/AP Photo) 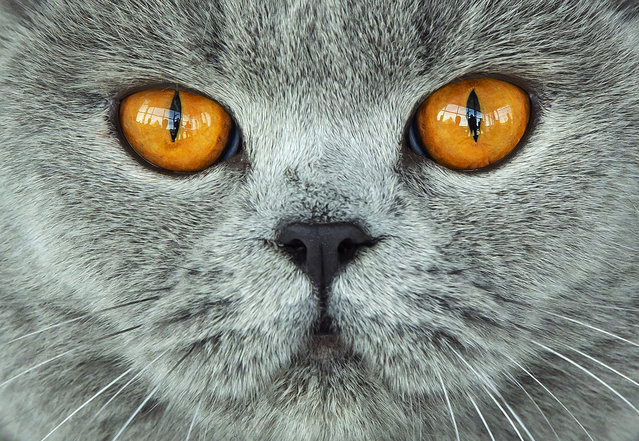 A British Shorthair cat waits during the jury session at the International pedigree dog and purebred cat exhibition in Erfurt, Germany, Sunday, June 2, 2019. More than 3,600 dogs and around 160 cats with their owners and 49 breed judges from 15 different countries take part at the exhibition and the competitions during this weekend. (Photo by Jens Meyer/AP Photo) 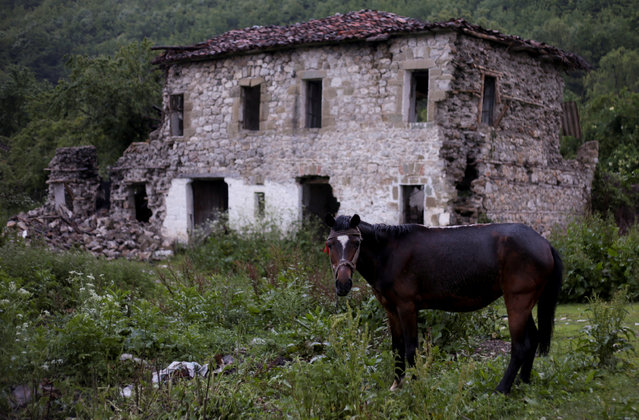 A horse stands next to a damaged building after an earthquake in Floq, Albania, June 1, 2019. (Photo by Florion Goga/Reuters) 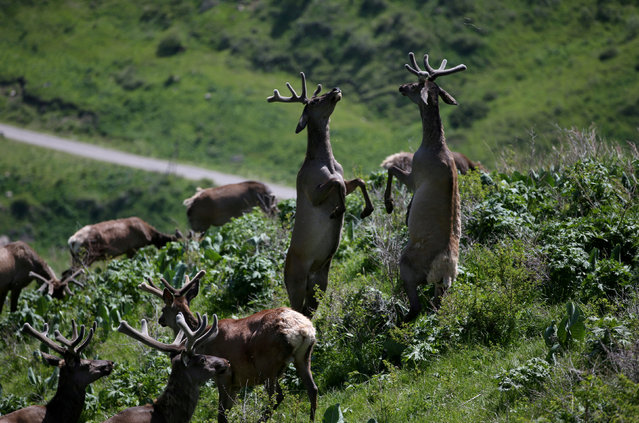 Deers graze at “Alatau Maraly” farm in Kasymbek gorge, Almaty region, Kazakhstan on May 31, 2019. Maral stags at this private farm undergo an annual cutting off their antlers to be sold to pharmaceutical companies. (Photo by Pavel Mikheyev/Reuters) 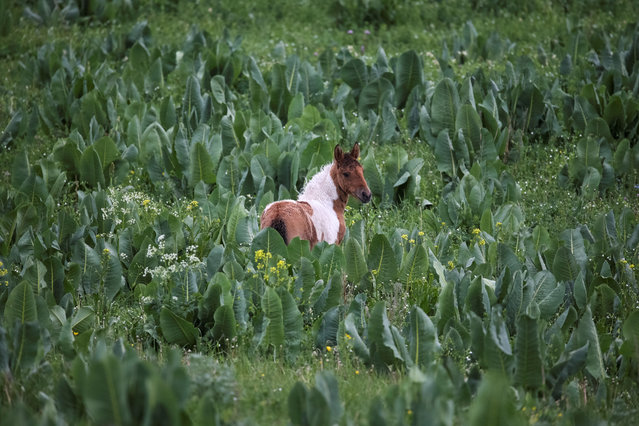 A foal grazes on the mountainous Ushkonyr Plateau, outside Almaty, Kazakhstan on June 2, 2019. (Photo by Pavel Mikheyev/Reuters) 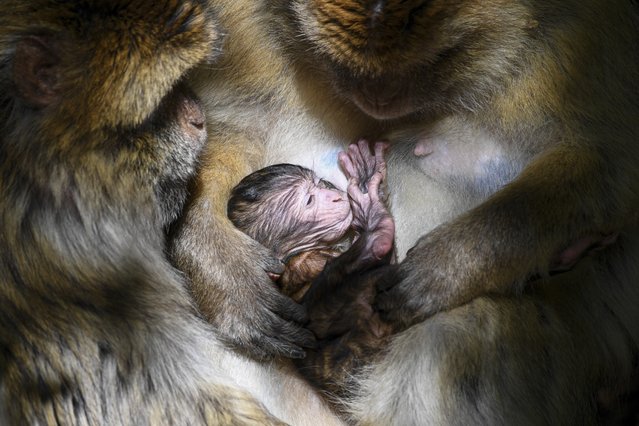 A Barbary macaque feeds a young animal in the outdoor enclosure on the so called “Monkey Mountain” in Salem, Germany, June 2, 2019. (Photo by Felix Kaestle/dpa via AP Photo) 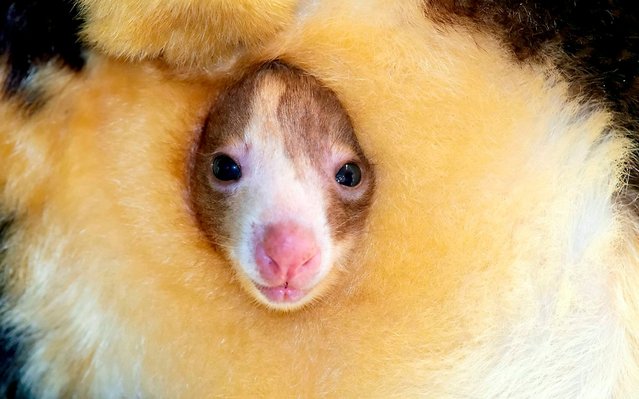 A rare Tree-kangaroo looks out of his mother's pouch seven months after his birth on June 3, 2019. (Photo by South West News Service/Action Press/PictureDesk) 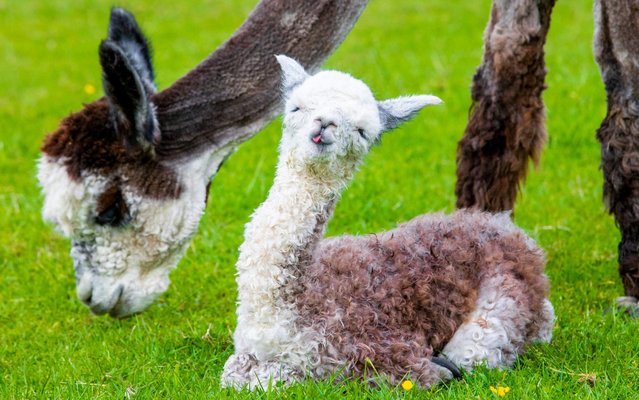 Staff at a Scottish farm say they are “absolutely delighted” to have welcomed a baby alpaca into the world this morning, June 6, 2019. Mum, Nunavut, gave birth to the baby boy huacaya alpaca, which has not yet been named, weighing 9.6kg. Stuart Ramsay, the owner of Velvet Hall Alpacas, in Innerleithen, Scottish Borders said he was surprised when the baby was born an “unusual rose grey colour”. (Photo by South West News Service) 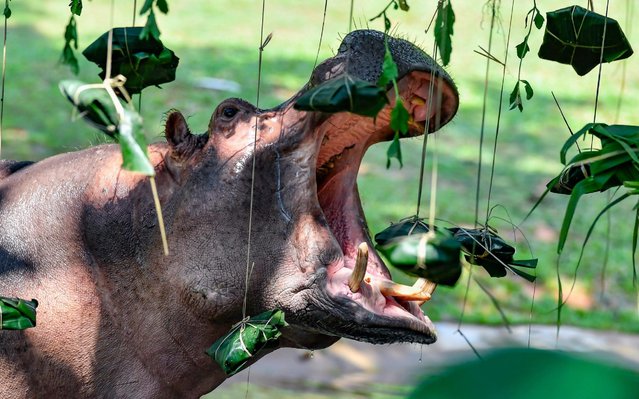 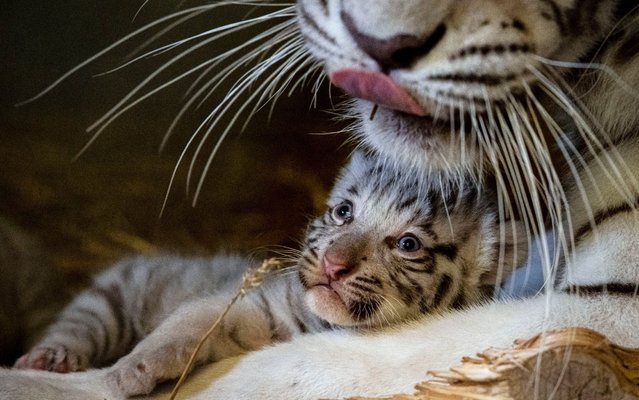