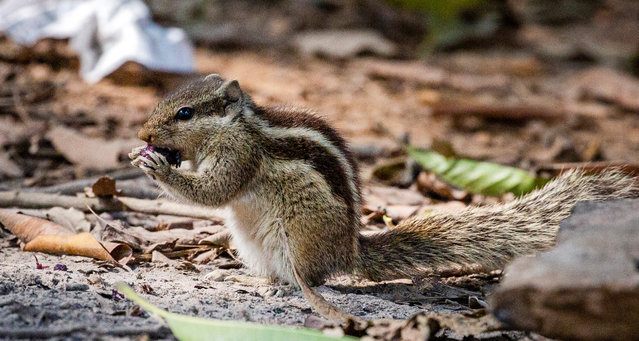 A three- striped squirrel eats on the ground during a winter day in the Rmna Park area in Dhaka, Bangladesh, 04 February 2021. About 279 k​nown species of squirrels and marmots live across the globe. (Photo by Monirul Alam/EPA/EFE) 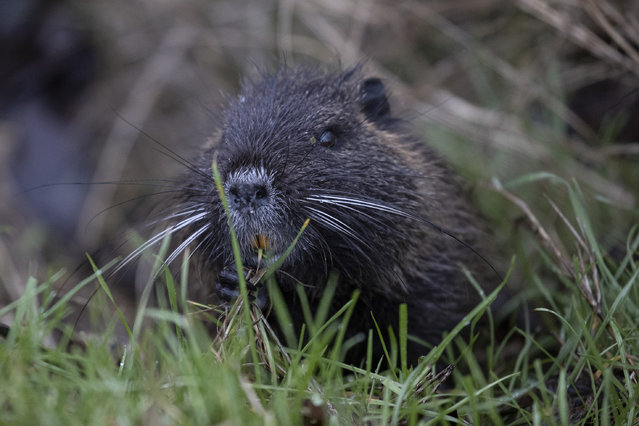 A coypu, also known as nutria is seen in Edirne, Turkey on January 31, 2021. The coypu lives in burrows alongside stretches of water, and feeds on river plant stems. Originally native to subtropical and temperate South America, it has since been introduced to Europe and Asia, primarily by fur farmers. Also the habitat of coypus in Thrace, region in Southeast Europe, is expanding. (Photo by Gokhan Balci/Anadolu Agency via Getty Images) 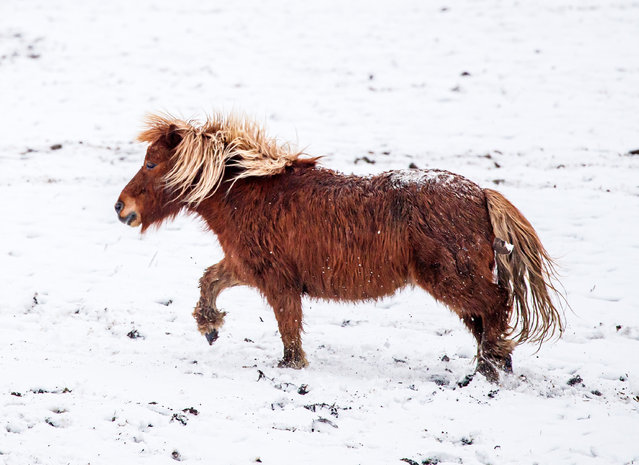 A pony plays in the snow near Millhouse Green in South Yorkshire on Sunday February 7, 2021, with heavy snow set to bring disruption to south-east England and East Anglia as bitterly cold winds grip much of the nation. (Photo by Danny Lawson/PA Images via Getty Images) 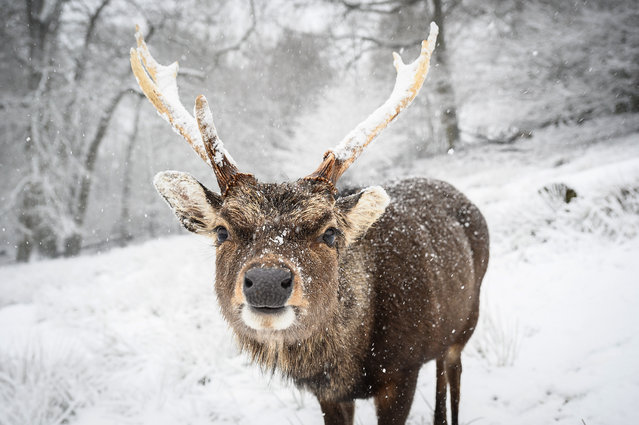 A deer is seen in the snow on Knole Park on February 07, 2021 in Sevenoaks, England. Heavy snow in Scotland and South East England over this weekend kick start a week of freezing temperatures across many parts of the UK. (Photo by Leon Neal/Getty Images) 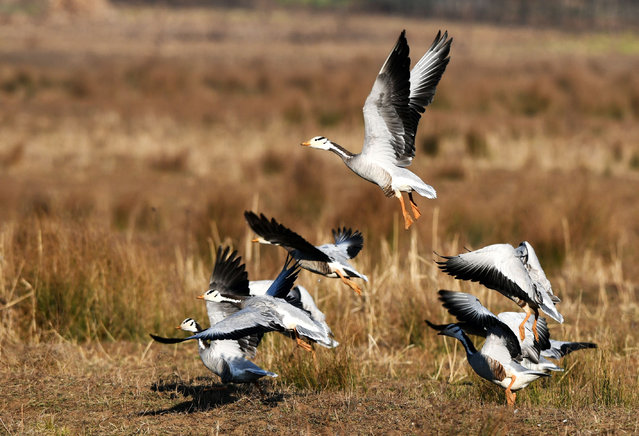 A flock of spotted geese are seen at the Caohai National Nature Reserve in Weining Yi, Hui and Miao Autonomous County, Bijie, southwest China's Guizhou Province, February 1, 2021. Caohai was listed as a national nature reserve in 1992 and is an important wintering ground and migration transfer station for birds such as black-necked cranes, grey cranes and spotted geese. In recent years, Guizhou Province has vigorously promoted comprehensive measures and wetland restoration in Caohai National Nature Reserve, with more than 100,000 birds coming to overwinter every year. (Photo by Xinhua News Agency/Rex Features/Shutterstock) 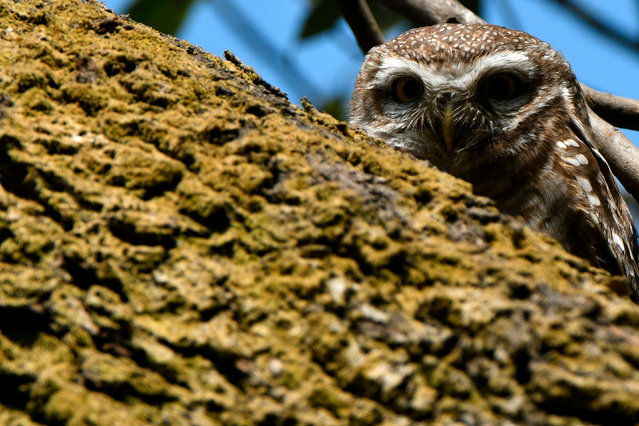 A spotted owlet is seen on a tree branch in Kathmandu on January 31, 2021. (Photo by Prakash Mathema/AFP Photo) 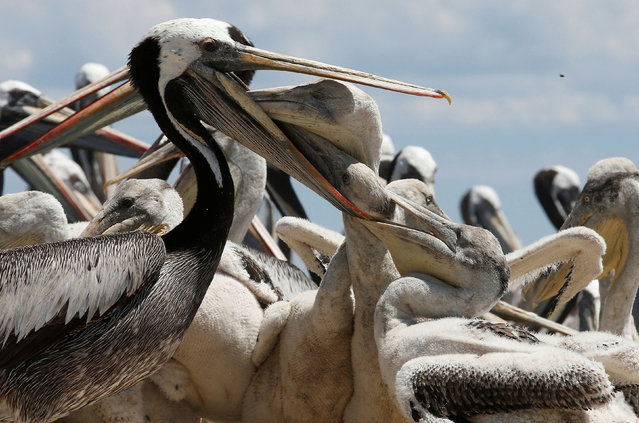 A pelican feeds its young during a census carried out by the National Forestry Corporation (CONAF) on Cachagua Island in Zapallar, Chile on February 8, 2021. (Photo by Rodrigo Garrido/Reuters) 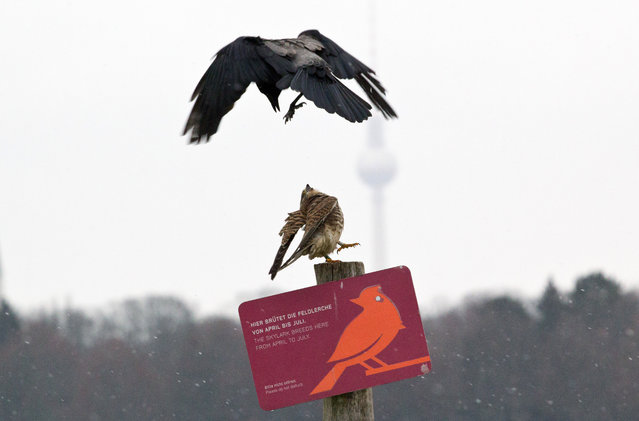 A kestrel is attacked by a hooded crow on Tempelhofer Feld, part of the former Tempelhof airport in Berlin on January 15, 2021. (Photo by Hauke Schroder/dpa) 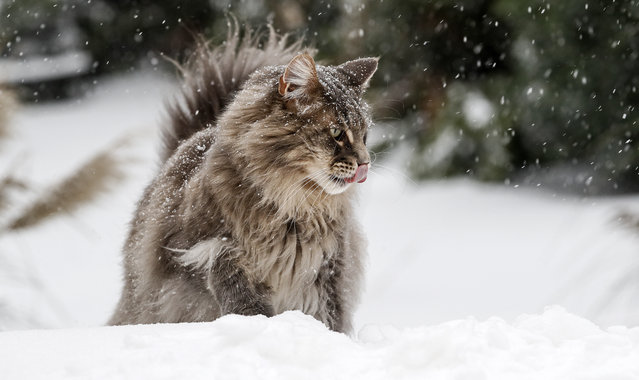 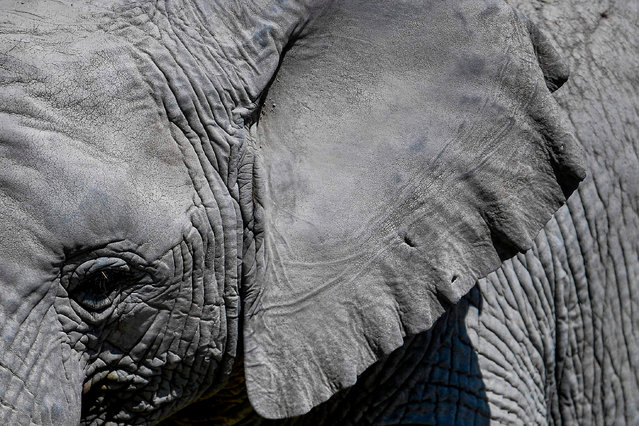 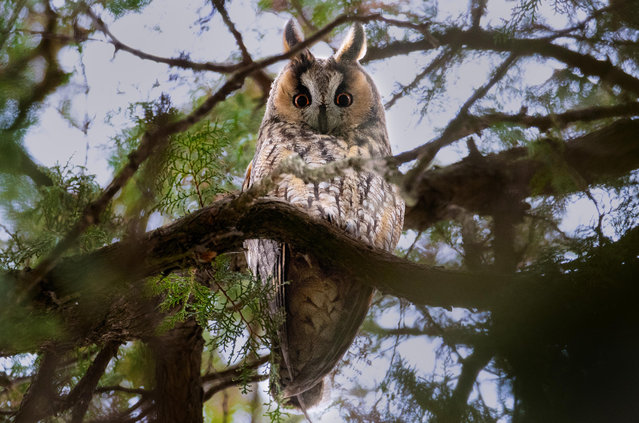 A long-eared owl at the Botanical Garden of the Southern Federal University in Rostov-On-Don, Russia on February 7, 2021. (Photo by Erik Romanenko/TASS) 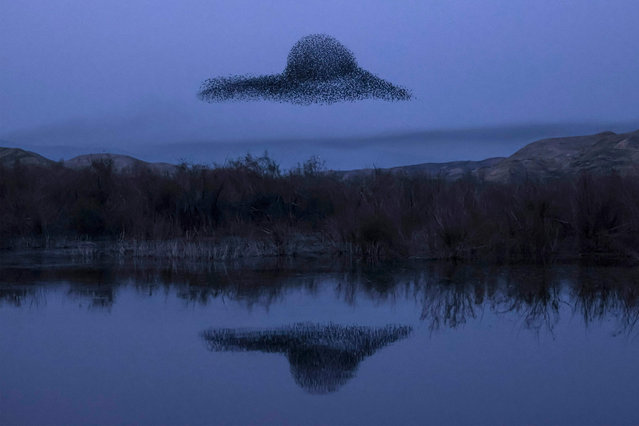 A murmuration of starlings flocks above the Jordan valley in the West Bank before landing to sleep along the border with Jordan, on February 7, 2021. (Photo by Menahem Kahana/AFP Photo) 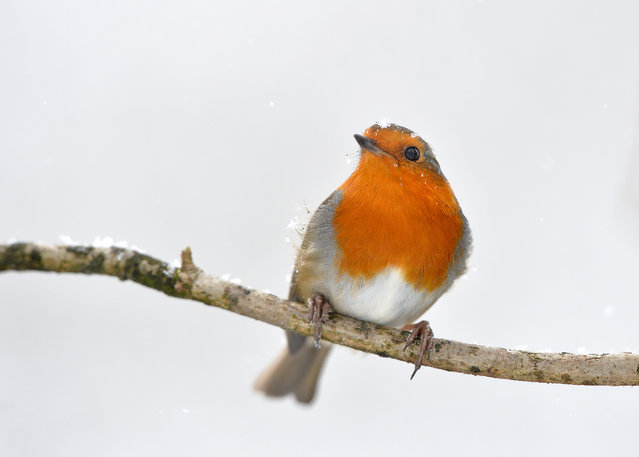 Birds in the snow. A Robin in the snow in Leicestershire, United Kingdom on February 8, 2021. (Photo by Alex Hannam/Alamy Live News) 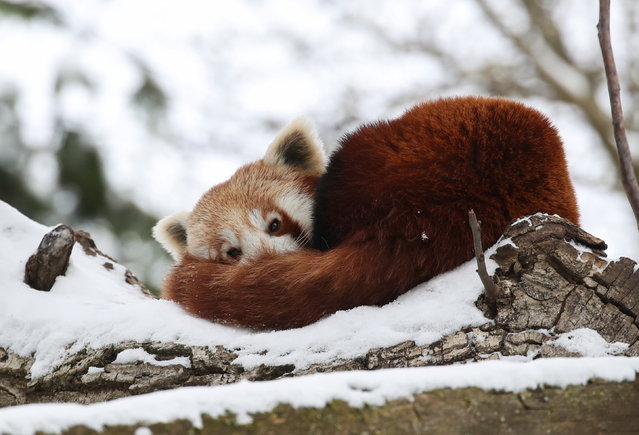 A red panda rests on on a snow-covered tree at Pairi Daiza zoo in Brugelette, Belgium, February 9, 2021. (Photo by Yves Herman/Reuters) 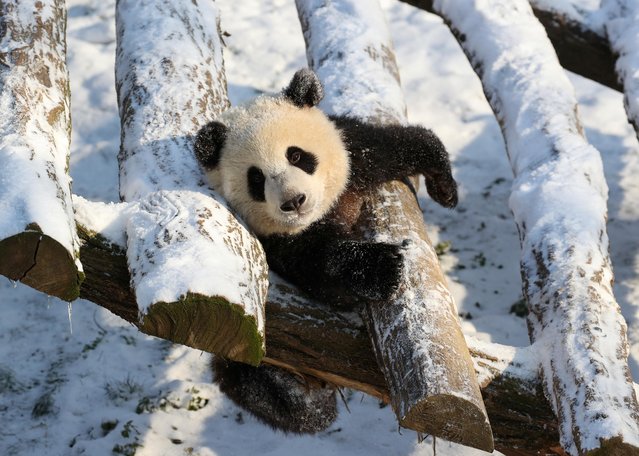 One of the two eighteen-month-old twin pandas plays in snow at Pairi Daiza zoo in Brugelette, Belgium, February 9, 2021. (Photo by Yves Herman/Reuters) 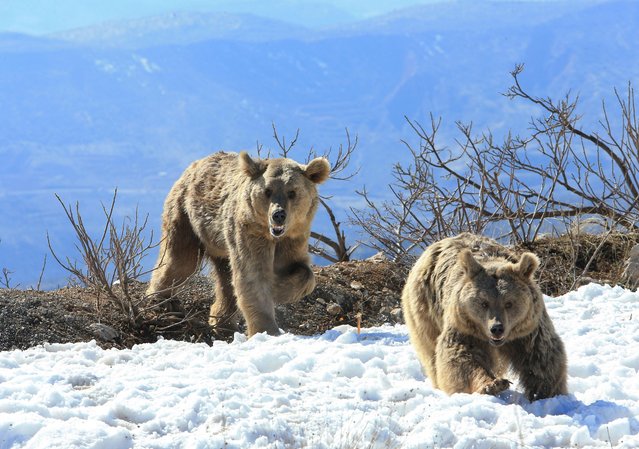 Bears walk after Kurdish animal rights activists released them into the wild after rescuing bears from captivity in people homes, in Dohuk, Iraq on February 11, 2021. (Photo by Ari Jalal/Reuters) 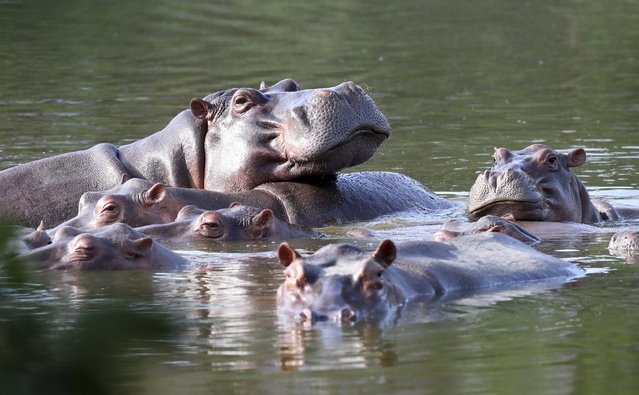 Hippos float in the lake at Hacienda Napoles Park, once the private estate of drug kingpin Pablo Escobar who imported three female hippos and one male decades ago in Puerto Triunfo, Colombia, Thursday, February 4, 2021. After his death in a shootout with authorities in 1993, the hippos were abandoned at the estate due to the cost and logistical issues associated with transporting 3-ton animals and the violence that plagued the area at the time. (Photo by Fernando Vergara/AP Photo) 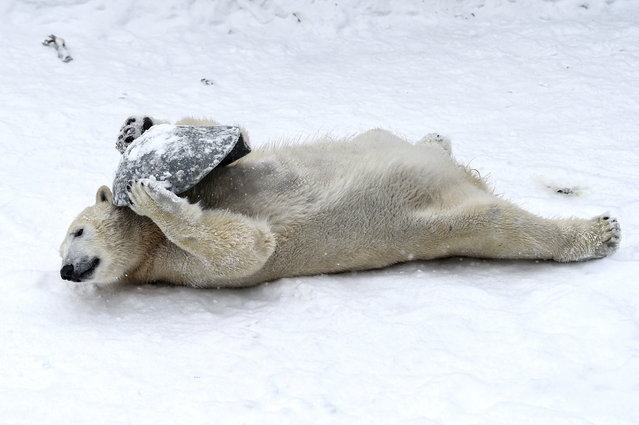 Two-year-old polar bear Hertha plays with a plastic bowl in the snow at the zoo in Berlin, Germany, Tuesday, February 9, 2021. (Photo by Kira Hofmann/dpa via AP Photo) 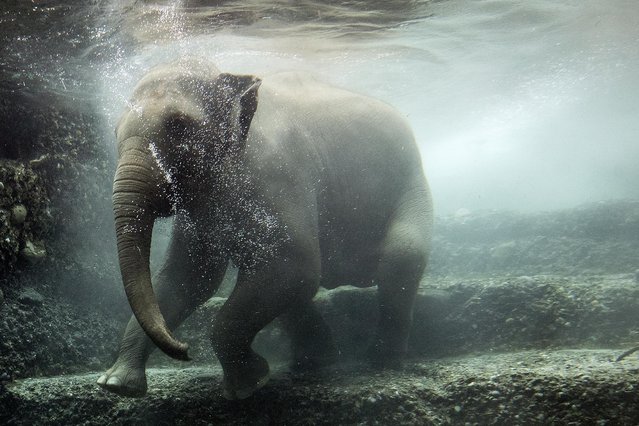 The elephant cow Omysha dives under water in its enclosure at the Zoo in Zurich, Switzerland, Wednesday, February 3, 2021. (Photo by Alexandra Wey/Keystone via AP Photo) 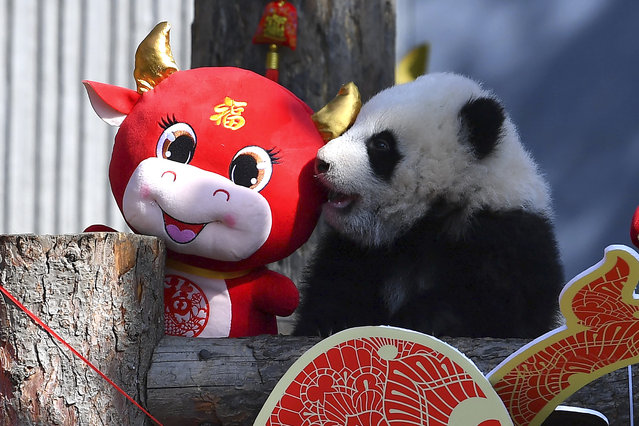 A baby panda climbs on a display for the upcoming Lunar New Year of the Ox at the China Conservation and Research Center for the Giant Panda at the Wolong Nature Reserve in southwestern China's Sichuan province, Wednesday, February 3, 2021. Ten baby pandas made their debut in China's leading panda reserve in the country's southwest on Wednesday morning ahead of the Lunar New Year. (Photo by Chinatopix via AP Photo) 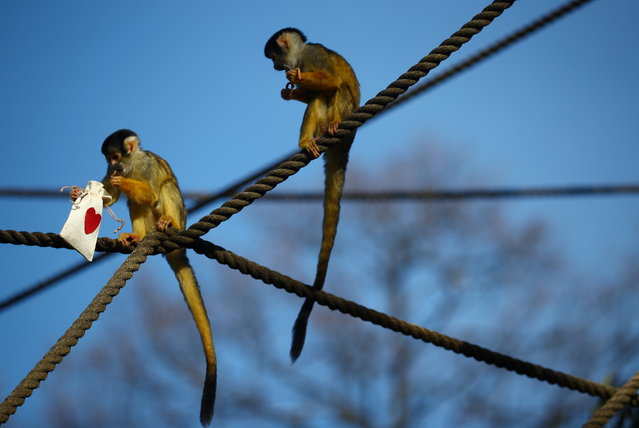