A bull jumps in the water during the traditional running of bulls “Bous a la mar” (Bull in the sea) at Denia's harbour near Alicante on July 8, 2019. (Photo by Jose Jordan/AFP Photo) 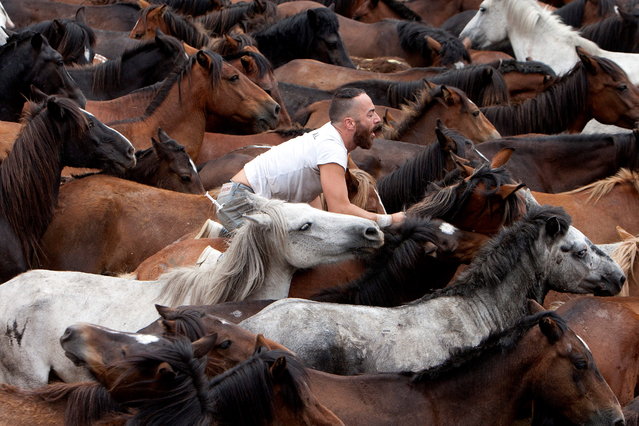 A man takes part in the traditional “Rapa das Bestas” or The Capture of the Beasts festival in Sabucedo, Galicia, Spain, 07 July 2019. Every year wild horses are captured in the hills and then carried to a farmyard to brand them and to cut their horsehair during a traditional festival. Several thousand people attended the feast to observe young people overcoming horses without using ropes or sticks. (Photo by Salvador Sas/EPA) 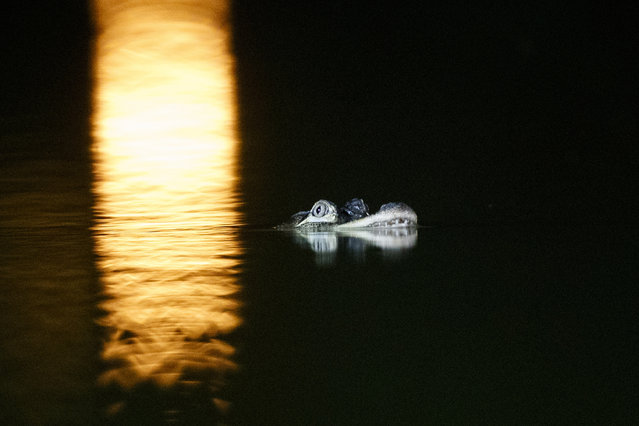 An alligator floats in the Humboldt Park Lagoon, Tuesday, July 9, 2019, in Chicago. Officials couldn't say how the creature got there, but traps are being placed around the lagoon in hopes the animal will swim into one and be safely removed. (Photo by Armando L. Sanchez/Chicago Tribune via AP Photo) 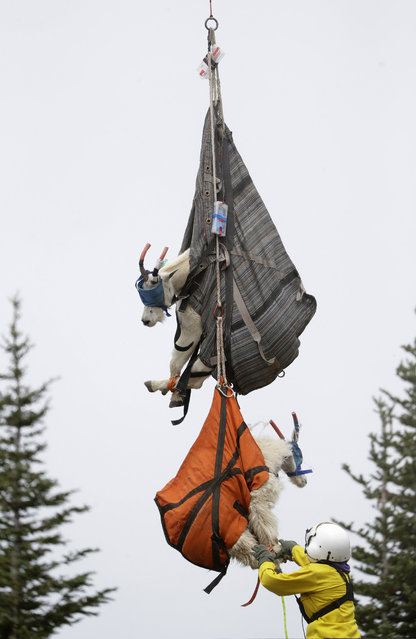 Olympic National Park Wildlife Branch Chief Patti Happe reaches toward a pair of mountain goats, including a billy, top, and a nanny, to settle them on the back of a truck after they were airlifted by helicopter Tuesday, July 9, 2019, to Hurricane Ridge in the park near Port Angeles, Wash. For the second straight summer, mountain goats are flying in Olympic National Park. Officials this week began rounding up the sure-footed but nonnative mammals from remote, rugged parts of the park so they can be relocated into the Cascade Mountains, where they do belong. (Photo by Elaine Thompson/AP Photo) 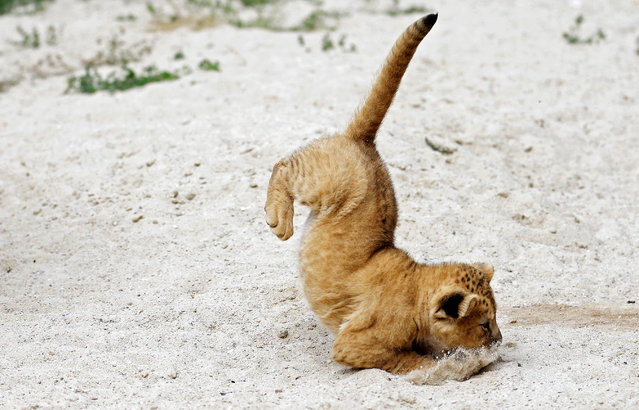 A Barbary lion cub jumps in its enclosure at the zoo in Dvur Kralove, Czech Republic, Monday, July 8, 2019. Two Barbary lion cubs have been born in a Czech zoo, a welcome addition to a small surviving population of a rare majestic lion subspecies that has been extinct in the wild. A male and a female that have yet to be named were born on May 10 in the Dvur Kralove safari park. (Photo by David W. Cerny/Reuters) 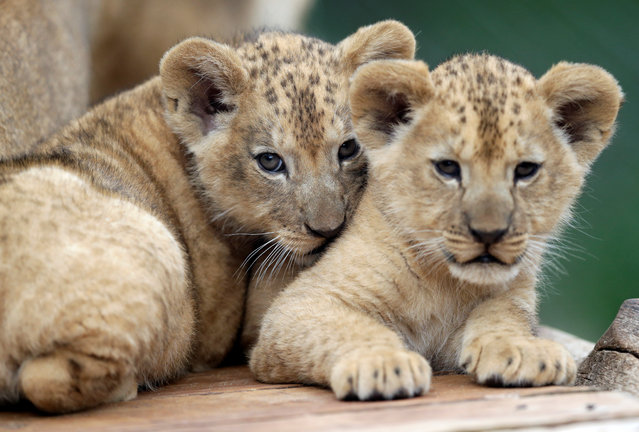 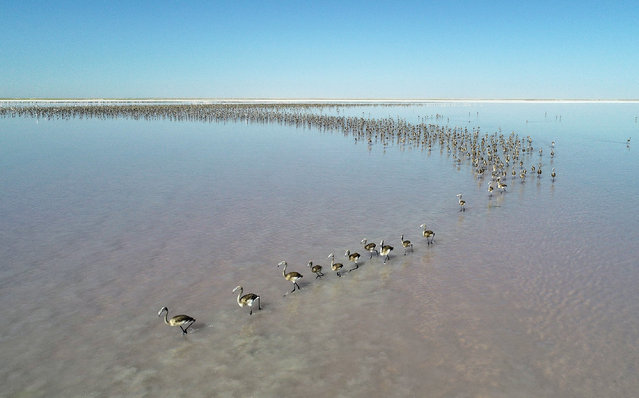 A drone photo shows flamingos on Lake Tuz, one of the most important center that flamingos incubate, in Konya province of Turkey on July 09, 2019. (Photo by Murat Oner Tas/Anadolu Agency/Getty Images) 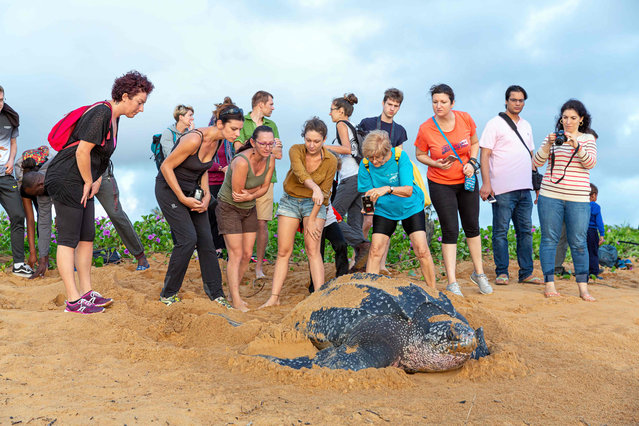 Onlookers take pictures as they observe a leatherback sea turtle, also known as the Luth turtle, laying eggs under the supervision of Kwata association members on a beach in Remire-Montjoly, French Guiana, on July 4, 2019. (Photo by Jody Amiet/AFP Photo) 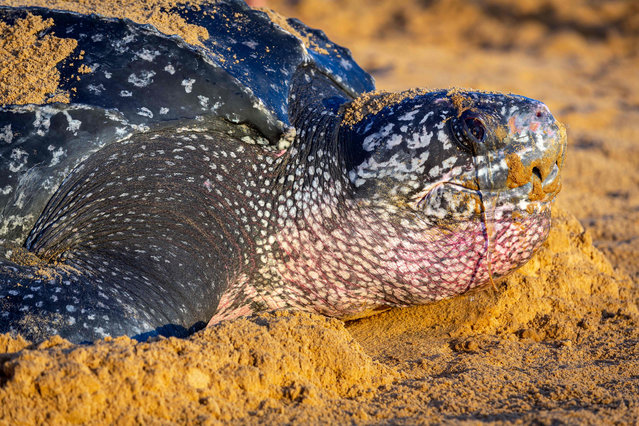 A leatherback sea turtle, also known as the Luth turtle, lays eggs under the supervision of Kwata association members on a beach in Remire-Montjoly, French Guiana, on July 4, 2019. (Photo by Jody Amiet/AFP Photo) 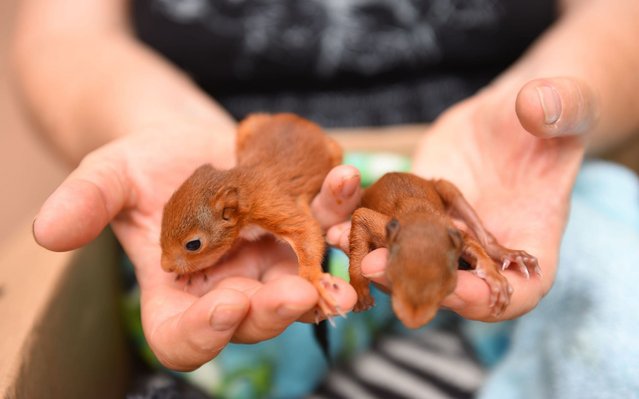 A volunteer of the “Goupil” association takes care of two young squirrels at the Wildlife Hospital in Laroque, southern France, on July 9, 2019. Since the end of June heat wave that hit France and Europe, the small tean at the Laroque Wildlife Hospital in the Herault department has been “overheating”, having received and treated hundreds of animals affected by the unprecedented heat. (Photo by Sylvain Thomas/AFP Photo) 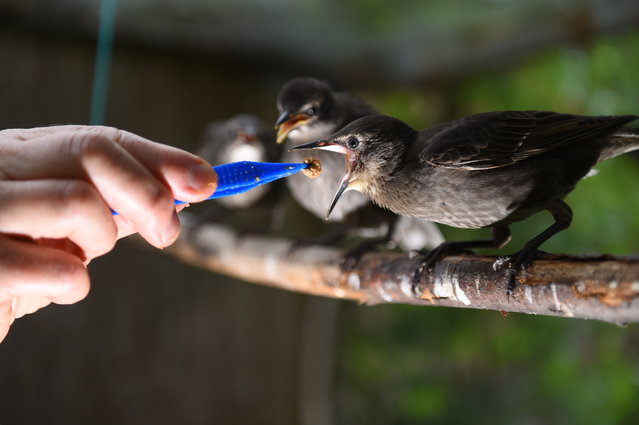 Marie-Pierre Puech, veterinarian and president of the Goupil association, feeds young starlings at the Wildlife Hospital in Laroque, southern France, on July 9, 2019. Since the end of June heat wave that hit France and Europe, the small tean at the Laroque Wildlife Hospital in the Herault department has been “overheating”, having received and treated hundreds of animals affected by the unprecedented heat. (Photo by Sylvain Thomas/AFP Photo) 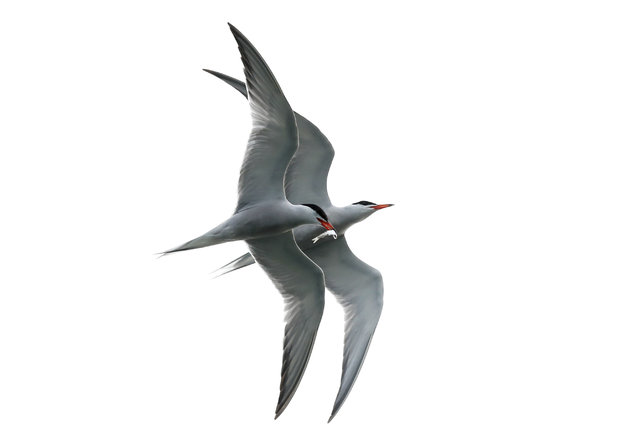 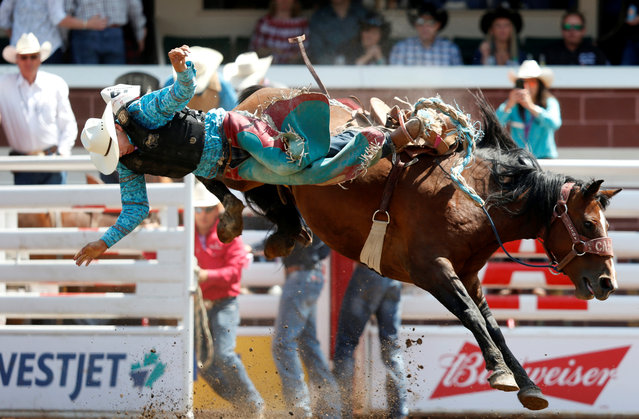 Kilby Kittson of Browning, Montana gets tossed off the horse Betrayed Cankaid in the junior saddle bronc event during the Calgary Stampede rodeo in Calgary, Alberta, Canada on July 7, 2019. (Photo by Todd Korol/Reuters) A general view as a runner is hosed down after racing at Newmarket Racecourse on July 12, 2019 in Newmarket, England. (Photo by Alan Crowhurst/Getty Images) 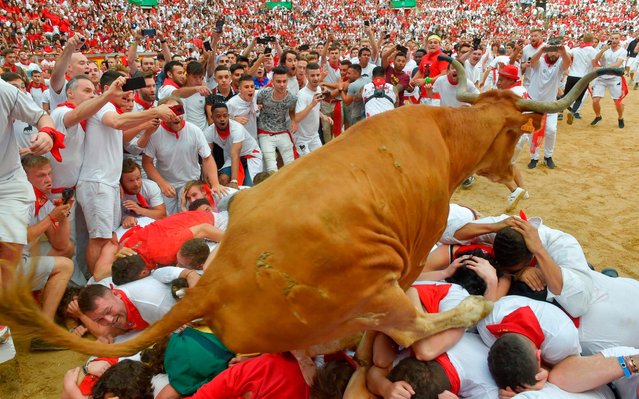 A heifer bull jumps over participants in the bullring after the second bullrun the San Fermin festival in Pamplona, northern Spain on July 8, 2019. On each day of the festival six bulls are released at 8:00 a.m. (0600 GMT) to run from their corral through the narrow, cobbled streets of the old town over an 850-meter (yard) course. Ahead of them are the runners, who try to stay close to the bulls without falling over or being gored. (Photo by Ander Gillenea/AFP Photo) A moon bear rests in a pool inside an enclosure at the Vietnam bear rescue centre, in Tam Dao national park, Vinh Phuc, Vietnam, 09 July 2019. The center is operated by international organization Animals Asia. There are currently 184 bears living at the the Vietnam Bear Rescue Centre. It is estimated that there are less than a few hundred bears left in the wild in Vietnam. According to the latest data from the Ministry of Agriculture and Rural development, around 600 bears are still being kept on farms. In Vietnam, Animals Asia has rescued a total of 209 sun bears and moon bears. (Photo by Minh Hoang/EPA/EFE/Rex Features/Shutterstock)
Edit Del
14 Jul 2019 00:05:00, post received 0 comments
Publication archive:
←   →
Popular tags:
All tags
Last searches: