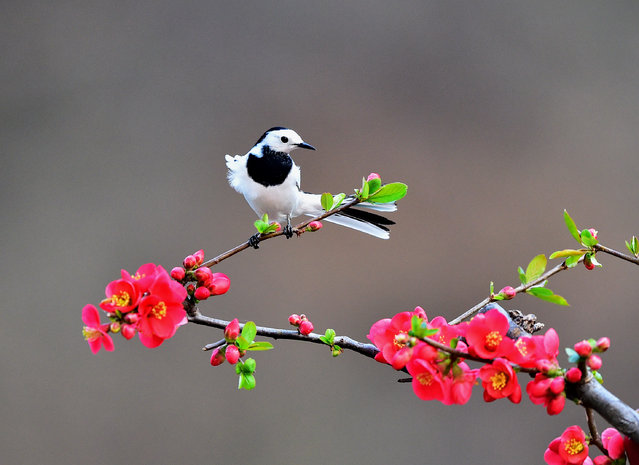 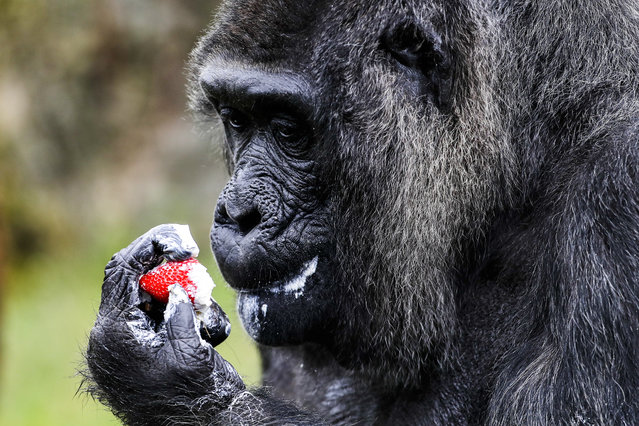 The female Gorilla Fatou looks at a straw-berry which topped a “rice-cake” to celebrate her 61st birthday at the zoo in Berlin, Germany, Friday, April 13, 2018. According to Zoo officials Fatou is together with Gorilla Trudy at a Zoo in Little Rock at the United State the oldest living female gorilla in the world. Both Gorillas are around 61 years. (Photo by Markus Schreiber/AP Photo) 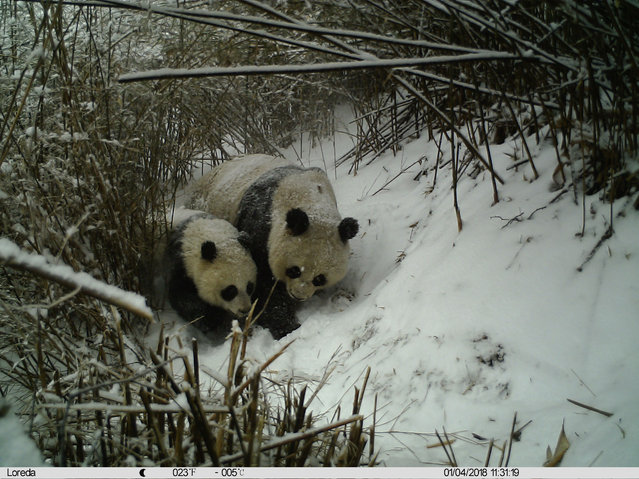 A giant panda sits with her cub in a snow-covered bamboo forest in Changqing nature reserve in Yangxian, Shaanxi province, China on April 4, 2018. (Photo by Changqing National Nature Reserve/Xinhua/Barcroft Images) 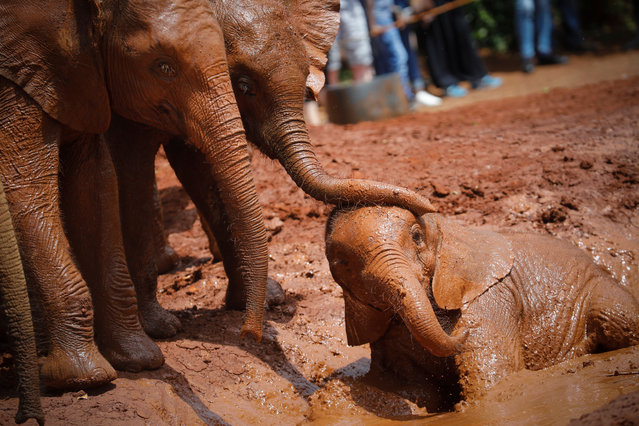 Orphaned baby elephants take mud bath, at the David Sheldrick Wildlife Trust Elephant Orphanage in Nairobi, Kenya, 10 April 2018. Founded by Dame Daphne Sheldrick in 1977, the elephant orphanage currently looks after 29 baby elephants who have been orphaned by human-wildlife conflicts and poaching, among other causes. (Photo by Dai Kurokawa/EPA/EFE) 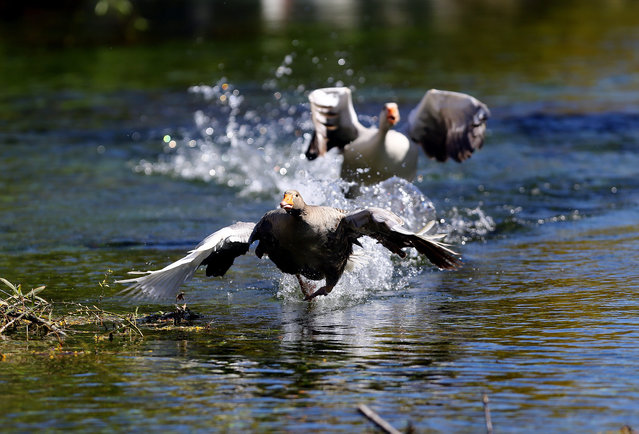 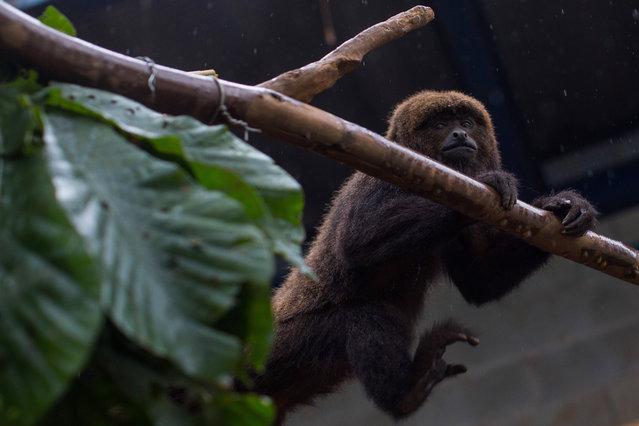 Monkey of the species Bugiu in nurseries in the Center of Management and Conservation of Wild Animals. The animals are treated by veterinarians and after a few months are returned to their natural habitat on March 28, 2018 in Sao Paulo, Brazil. The mosquito-borne disease lives on top of the trees in the forests around the big cities, even habitat of the Bugiu monkey. The lack of information of the population caused that many cases of aggression and murder of the monkeys happened in the neighborhoods near the regions of forest. The Bugiu monkey has similar characteristics to humans because they both die within a period of about a week after contracting the virus. Experts believe that the population of this species of monkey was practically exterminated in the city of Sao Paulo because of the disease. (Photo by Victor Moriyama/Getty Images) 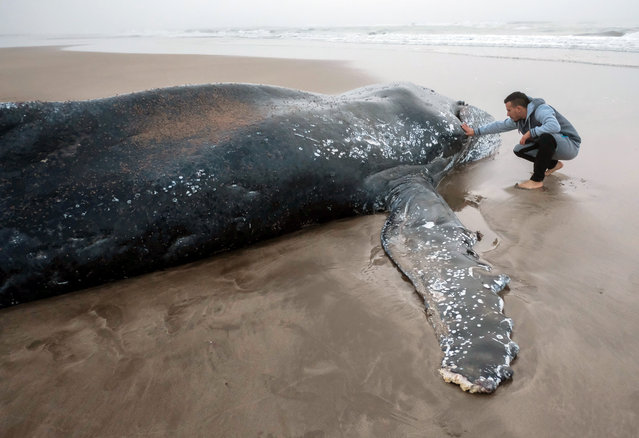 A wildlife rescuer helps a whale stranded in Mar del Plataa, Argentina on April 8, 2018. According to local press, people have been working for more than 20 hours to free a specimen of humpback whale of six tons and 8 meters long that got stranded in the south of Mar del Plata. (Photo by Xinhua News Agency/Rex Features/Shutterstock) 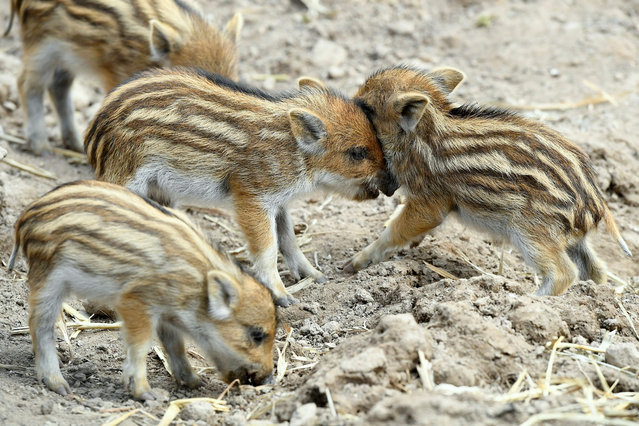 Some of the two-weeks-old wild boar squakers frolick in the Budakeszi Game Park, Hungary, 10 April 2018. The piglets are all healthy. (Photo by Szilard Koszticsak/EPA/EFE) 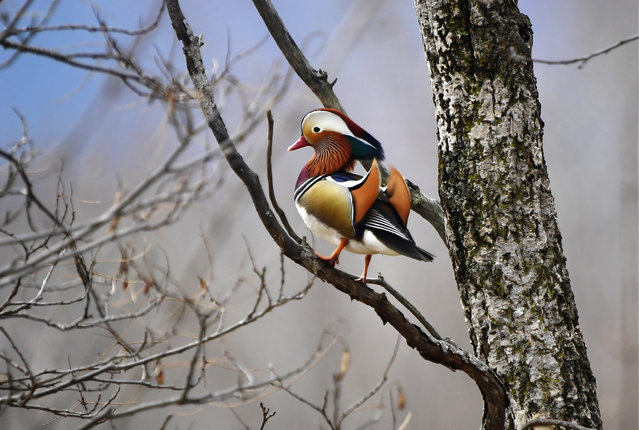 A Mandarin duck on a tree by the Solyonaya Protoka River outside Vladivostok, Russia on April 11, 2018. (Photo by Yuri Smityuk/TASS) 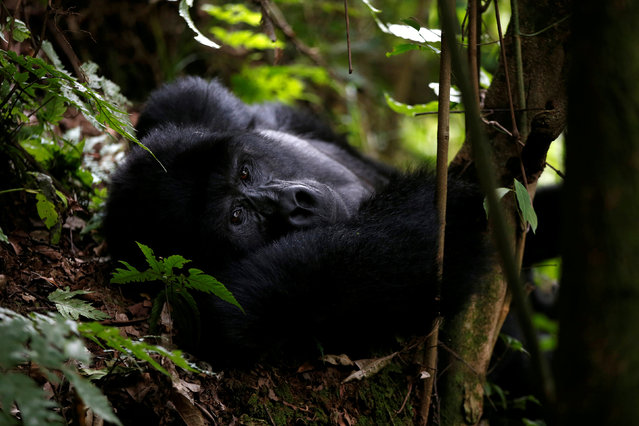 A male mountain gorilla from the Mukiza group is seen in the forest within the Bwindi National Park near the town of Kisoro, Uganda March 31, 2018. (Photo by Baz Ratner/Reuters) 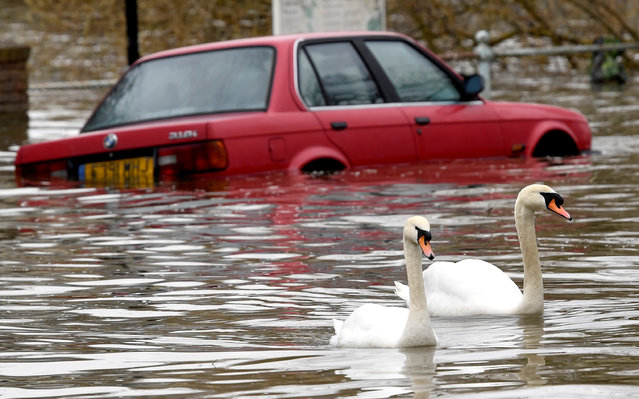 Swans swim past a car submerged under flood water on a residential street in Richmond, west London, Britain, April 1, 2018. (Photo by Toby Melville/Reuters) 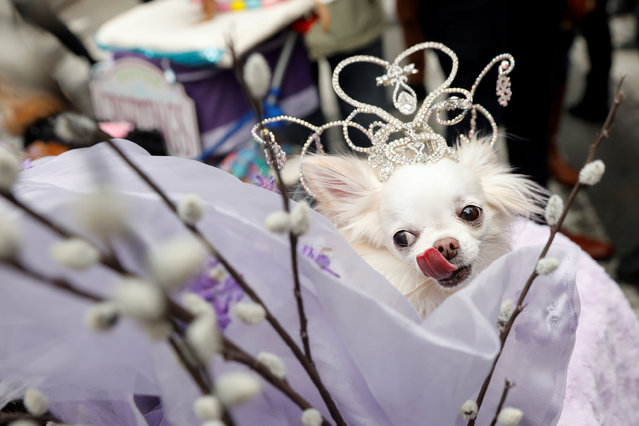 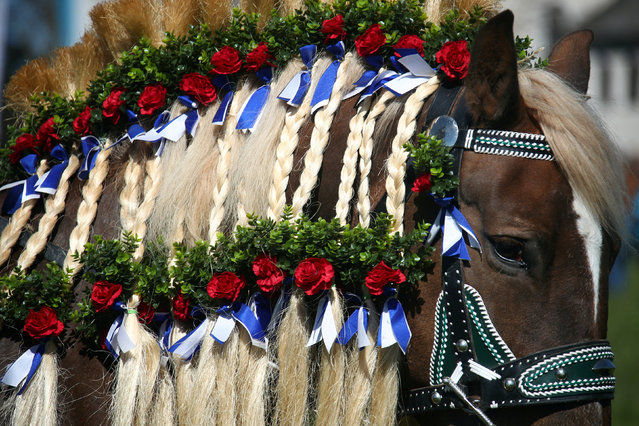 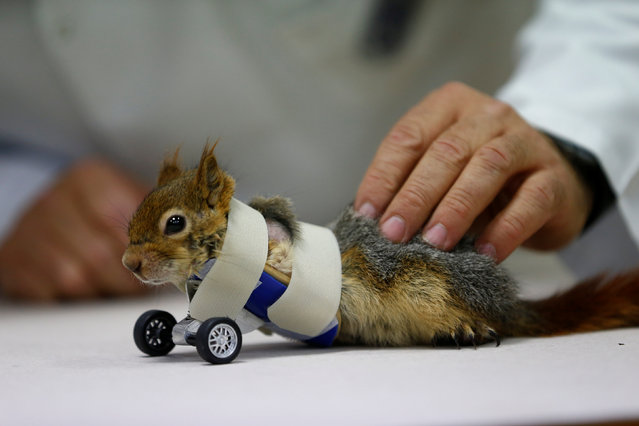 A prosthetics technician tests wheels on a squirrel after its limb amputation surgery at Aydin University in Istanbul, Turkey April 3, 2018. (Photo by Osman Orsal/Reuters) 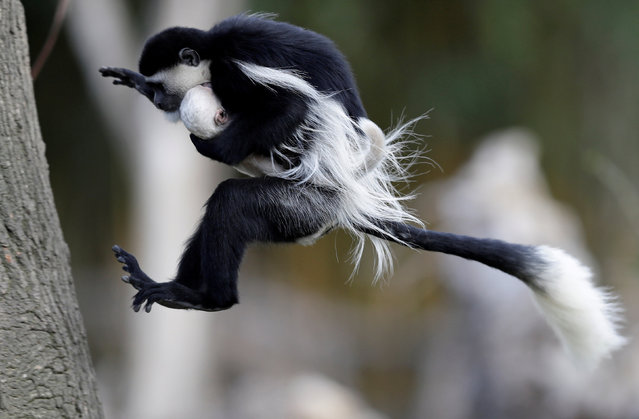 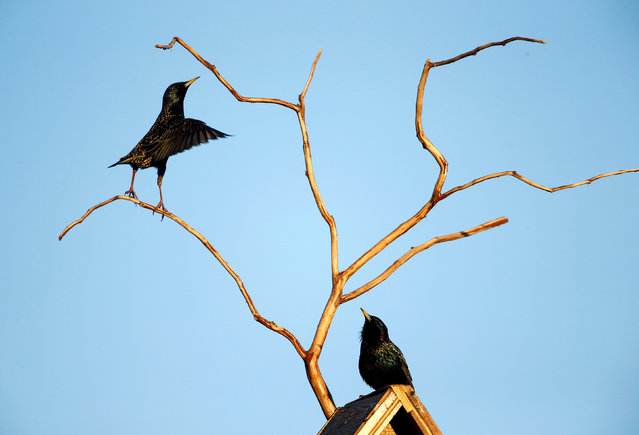 Starlings are seen at their nesting box in a private garden in the town of Bobruisk, Belarus, April 8, 2018. (Photo by Vasily Fedosenko/Reuters) 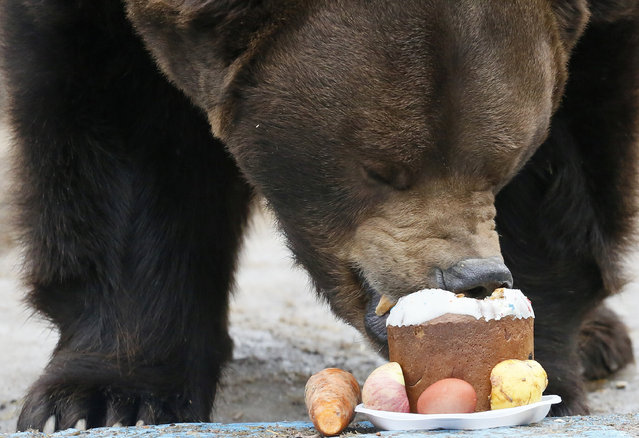 Buyan, an 18-year-old male Siberian brown bear, is fed with an Easter cake, known as “Kulich”, on Easter Sunday at the Royev Ruchey Zoo in a suburb of the Siberian city of Krasnoyarsk, Russia April 8, 2018. (Photo by Ilya Naymushin/Reuters) 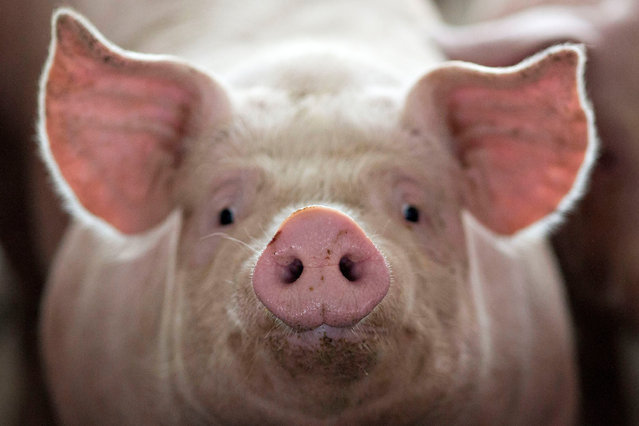 A newborn Asian elephant is pictured on the first day of a public appearance at the Planckendael Zoo in Mechelen, Belgium April 11, 2018. (Photo by Yves Herman/Reuters) 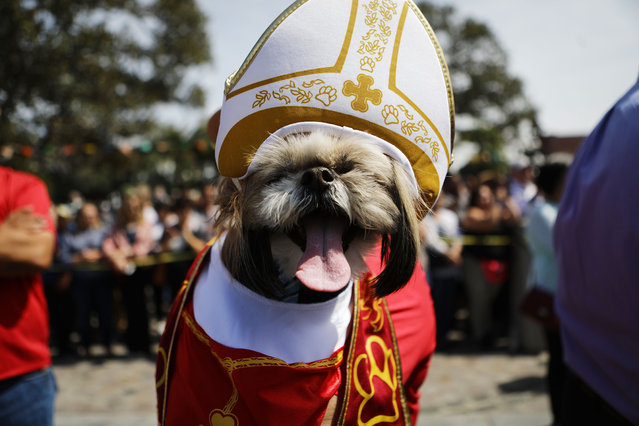 A dog is dressed in Catholic vestments during the annual Blessing of the Animals ceremony, presided over by Archbishop Jose H. Gomez, on March 31, 2018 in Los Angeles, California. Angelenos brought dogs, cats, birds, goats, snakes and other animals to the event which is normally held the day before Easter. The tradition dates back to 1930 in Los Angeles. (Photo by Mario Tama/Getty Images) 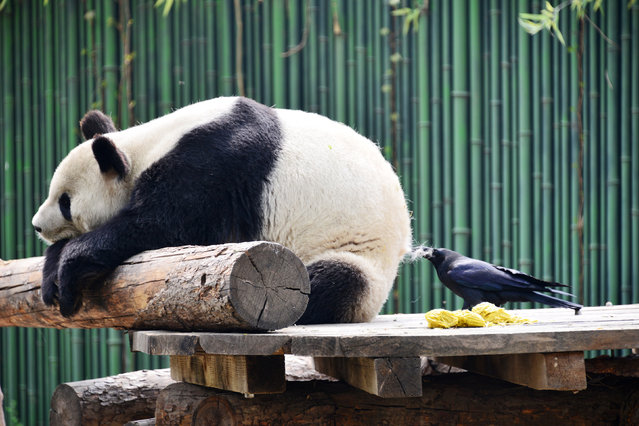 This photo taken on April 9, 2018 shows a crow pecking hair from a giant panda for nesting at Beijing Zoo in Beijing, China. (Photo by AFP Photo/Stringer) 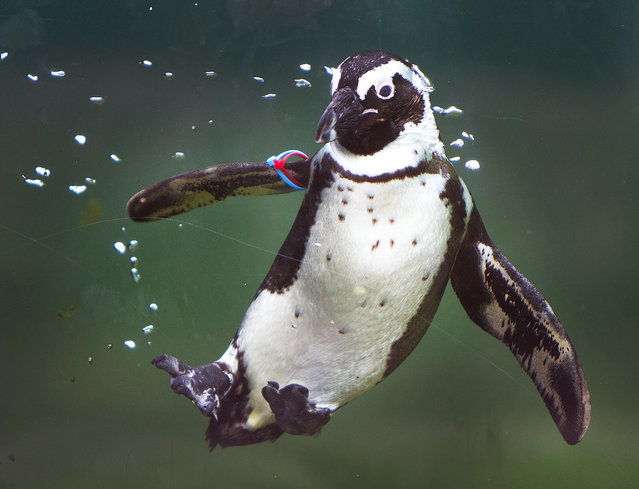 A jackass penguin dives in a pool in the Opel zoo in Kronberg near Frankfurt, Germany, Monday, April 9, 2018. (Photo by Michael Probst/AP Photo) 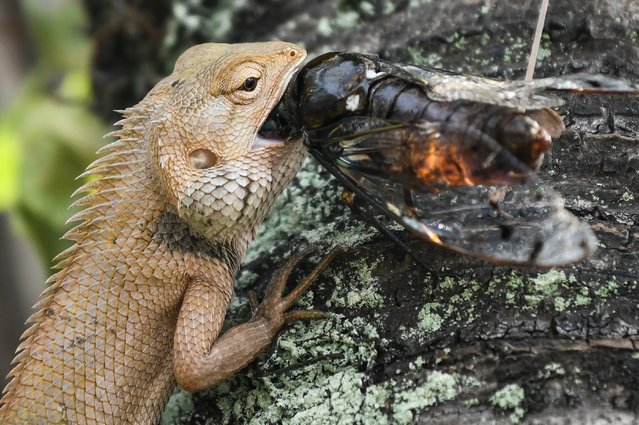 A lizard (L) eats a bug in Putrajaya, outside Kuala Lumpur on April 10, 2018. (Photo by Mohd Rasfan/AFP Photo) 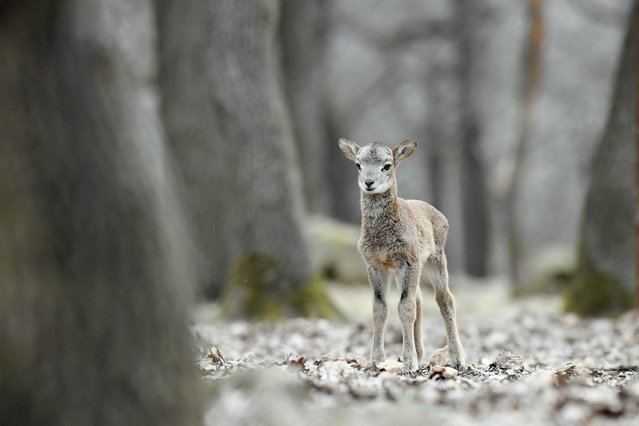 A one week old muflon lamb looks around in the Budakeszi Game Park, just west of Budapest, Hungary, 10 April 2018. (Photo by Szilard Koszticsak/EPA/EFE) 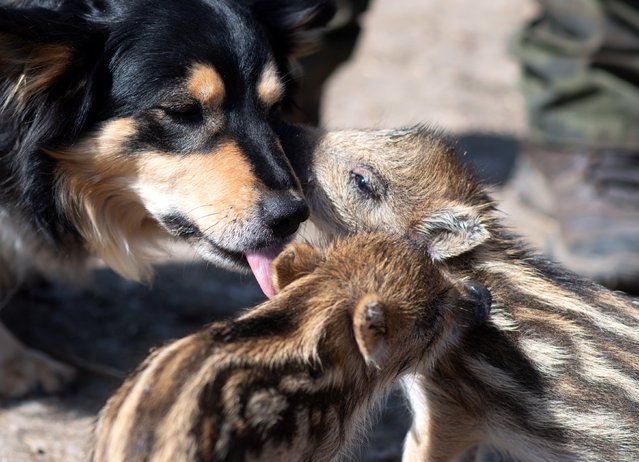