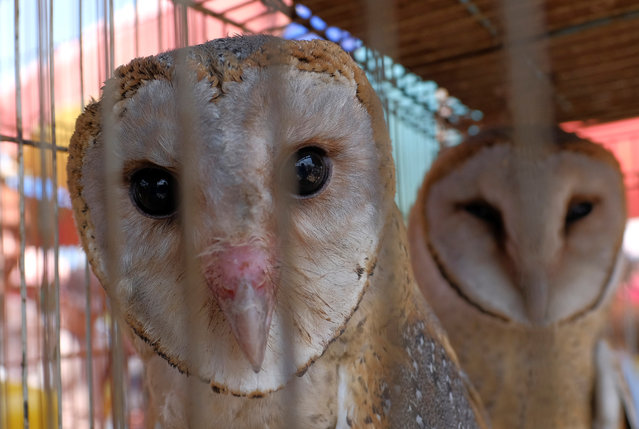 Owls for sale are seen inside a cage at a bird market in Tangerang, west of Jakarta, Indonesia, September 17, 2017. (Photo by Reuters/Beawiharta) 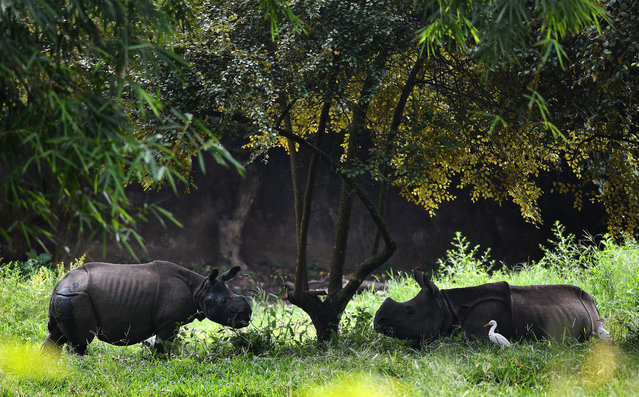 Two one horned baby Rhinos grassing just after they arrived from Kaziranga National park in Guwahati Zoo, Assam, India, 13 October 2017. Three rhino calf, which were rescued from this year's flood in Kaziranga, have been brought to Guwahati zoo for conservation breeding programme. (Photo by EPA/EFE/Stringer) 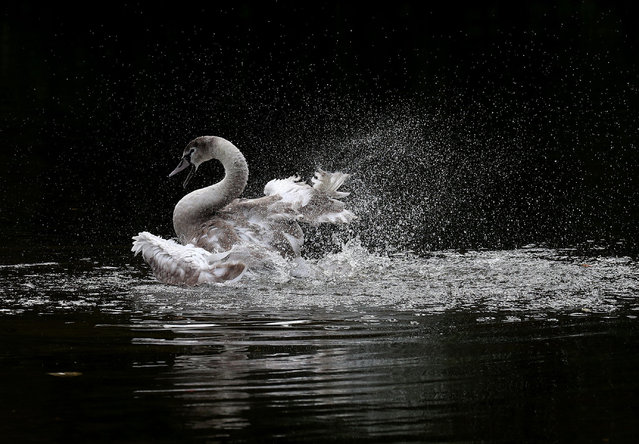 A cygnet splashes in the loch at Callendar Park in Falkirk, UK on October 10, 2017. (Photo by Andrew Milligan/PA Wire) 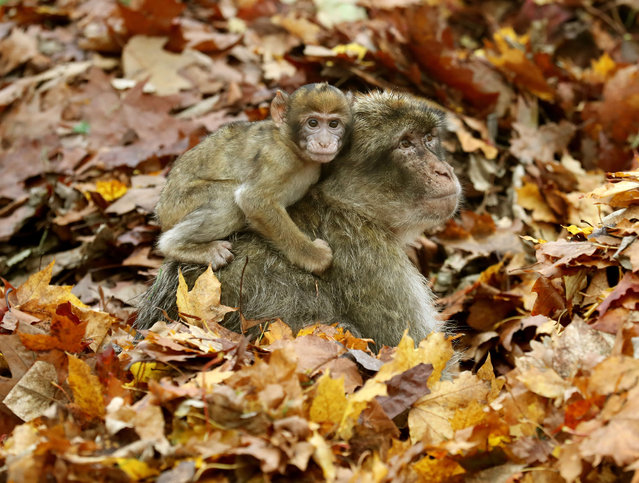 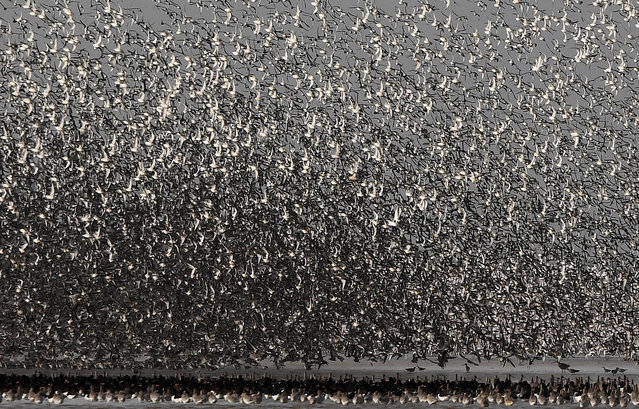 Thousands of wading birds form a murmuration as they fly onto dry sandbanks during the month's highest tide at The Wash estuary, near Snettisham in Norfolk, Britain, October 10, 2017. (Photo by Toby Melville/Reuters) 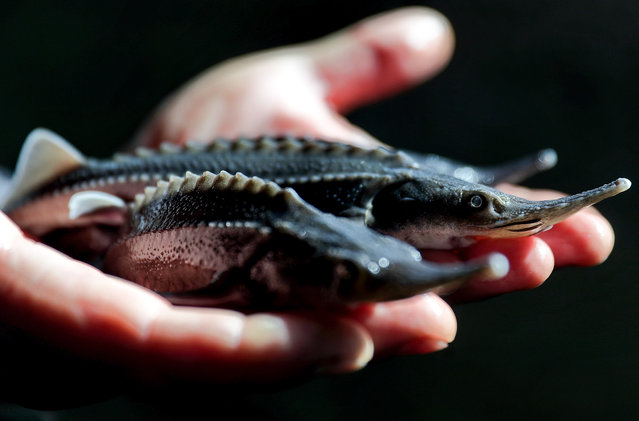 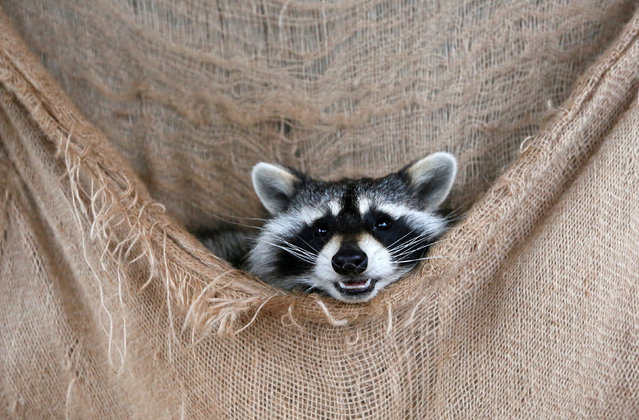 Maya, a six-month-old female raccoon, plays in a cage at the Roev Ruchey Zoo in a suburb of the Siberian city of Krasnoyarsk, Russia October 13, 2017. (Photo by Ilya Naymushin/Reuters) 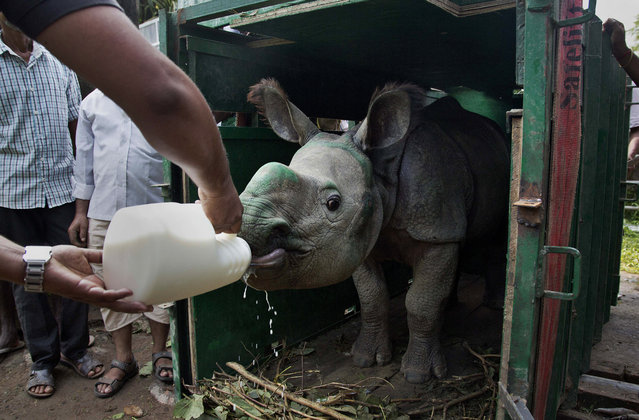 Indian veterinary doctor Samshul Ali feeds milk to a one-and-a-half year-old one horned female Rhino calf in a cage after she arrived at the state zoo in Gauhati, India, Friday, October 13, 2017. One male and two female calves one-horned rhinoceros, who were rescued during monsoon floods over the past two years from a famed wildlife preserve in India's northeast, were on Friday transported to a local zoo for breeding. The three, one-and-a half years to two-and-a-half years old, were put in cages on three different trucks and brought to the zoo in Gauhati, the capital of Assam state, from the Centre for Wildlife Rehabilitation and Conservation in Panbari, said Tajas Mariswamy, a regional forest officer. (Photo mby Anupam Nath/AP Photo) 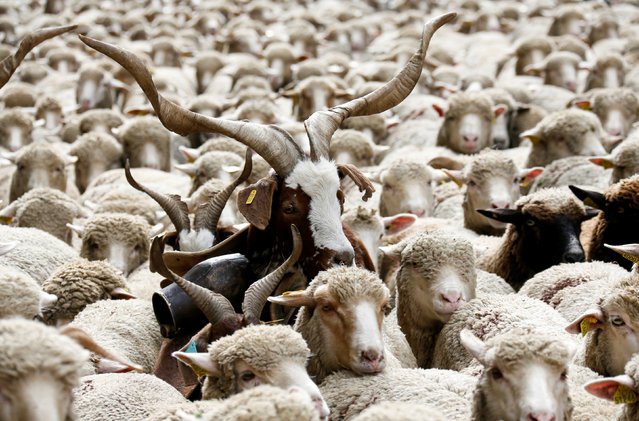 Hundreds of sheep are seen during a protest by French farmers against the government's “Plan loup” (wolf project) which protects wolves that the farmers blame for livestock deaths and financial losses, in Lyon, France, October 9, 2017. (Photo by Robert Pratta/Reuters) 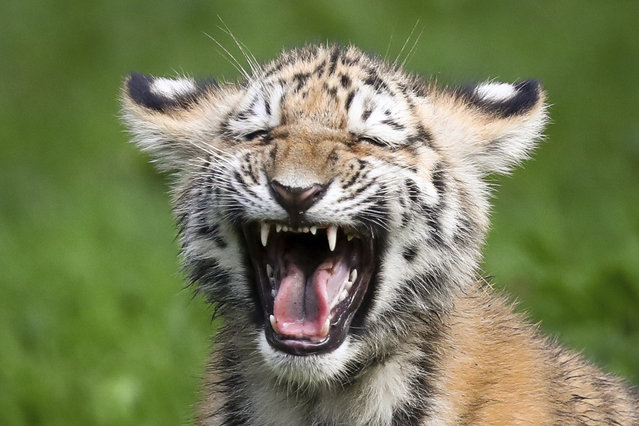 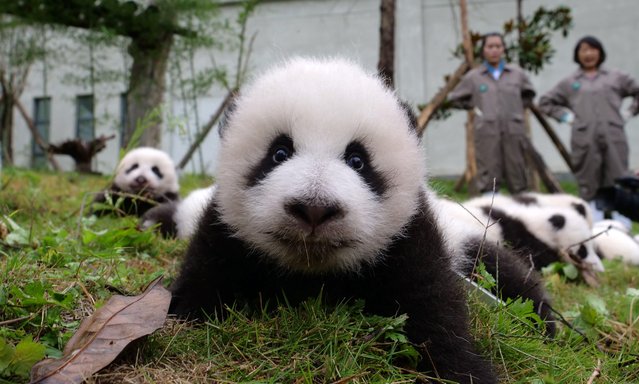 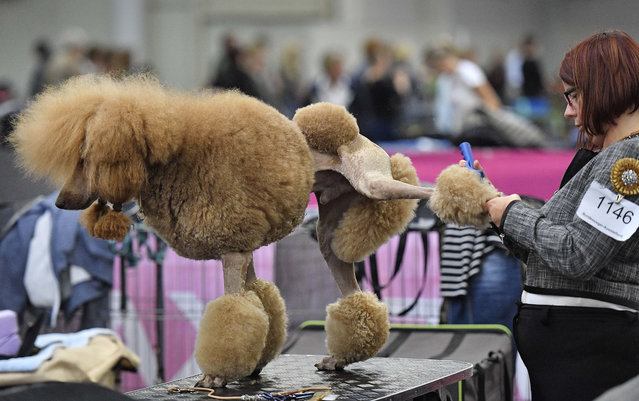 A poodle is prepared for his competition at the Dog Show in Dortmund, Germany, on Friday, October 13, 2017. Thousands of dogs will be judged by international jurys at Germany's biggest show in the Dortmund fair halls until Sunday. (Photo mby Martin Meissner/AP Photo)
Edit Del
15 Oct 2017 08:17:00, post received 0 comments
Publication archive:
←   →
Popular tags:
All tags
Last searches: